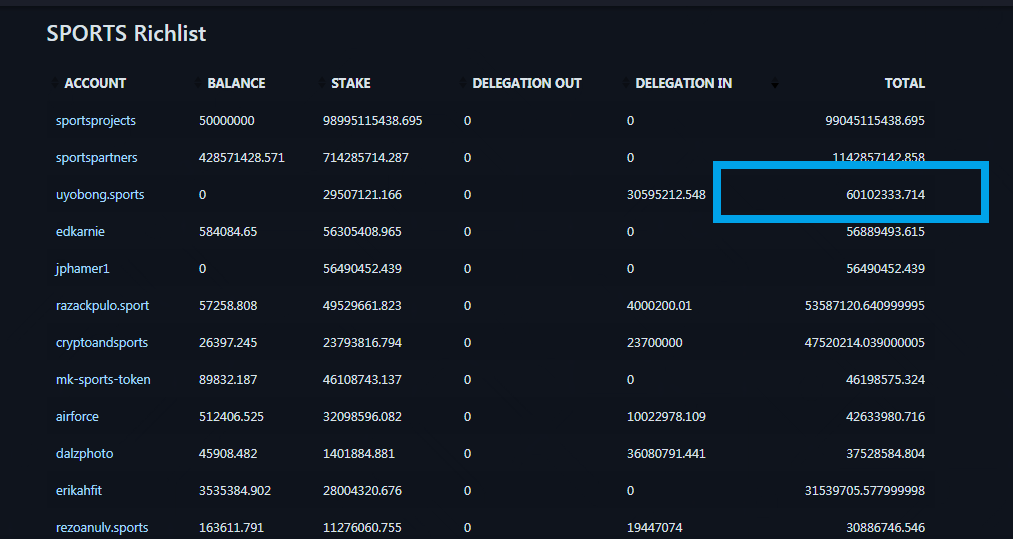 It's a beautiful experience and achievement to lead the SPORTS staking spree with near 5 million tokens. Crossing the 60 million staking mark for SPORTS token is very cozy for me. Alas, it's getting realer that the 200 million token stake mark is possible in fewer months than I planned should the price remain as low as it is. There's a new discovery of a build that would be released in Hive-engine in the next three months that inspires me to go for more SPORTS. Coupled that with the move in development in the Sports Talk Social tribe is something worth risking a stake.

I believe in beginnings because that's where you make indelible marks and your contributions are easily noticed. Posterity would not forget the efforts I put in to promote and market the Sports Talks Social (STS) community while its token were still insignificant in value in the crypto charts. In the future, we'll see some 100x to 100x from today's present value and all who believed and bought in today would be glad they did.

I imagine how financially free Bitcoin believers and buyers as at $1 would be today if they had hodl their assets ten years after. Or do you know how happy the $DOGE faithfuls would be after seeing a jump from $0.007 to $0.07 in less than 48 hours. Such sudden bulls are common with crypto and long term thinkers never regret their decisions.

I don't want to be among those who'll regret they had some tangible amount of SPORTS earlier. Trust me, a time will come, I would have no time to pen this long posts about SPORTS. I'll just stay to reap the bounties of my curation rewards and perhaps sell some millions of tokens for millions of dollars. It's closer than we thought. My SPORTS staking goal for January 2021 was 65 million but reaching 60m is already a huge success. If I'm disciplined to follow this pace over the next six months in terms of curating and content creation, then I would have passively topped my stake with additional 40 million tokens. Deciding to take advantage of a low rate to buy some more could help peg my SPORTS power at near 150 million by June 2021 ending.

Now, my interest is how to get active users and have them stay to create quality contents in the community quite earlier before huge investors join us when the true value of SPORTS token emerges. It won't be an anormally to have SPORTS be exchanged for more than 1 HIVE as we have for LEO. HIVE is meant to be a base token for the business layers to thrive upon.

Like I have mentioned in previous posts, the grand goal is to earn $500 as monthly curation rewards before the end of 2021 and it happens in either of three years - Stake grown to 200 million, HIVE price doubles itself and or SPORTS grow to 10x its present value where other variables remain constant in each case. A similar goal was very clear with LEO when I started engaging the community on March 2020.

With my curation rewards presently staying above $100 is an indication that the future of curation with SPORTS token is brighter than we could imagine. I'm not stopping till my grand goals are achieved and how awesome it would be to have it in less than 5 years.

Stretching out to hit the 70 million mark in the next few weeks and I'll be glad to inspire you once more.

It can only better if you take the right investment decisions at the right time on the right asset that that has the potential to grow to the right point. SPORTS could be one of such. You too can head to LeoDex to cut your share with pie budgets.

I have been seeing so many posts and content in the sports talk social community. Unfortunately, when I stepped in and started creating about two to three contents presently, I was somewhat discouraged because of less interaction as well as in terms of rewards.
Though I am not losing hopes. I am exactly a month old today and I am very pleased with the pace of my growth here for the past few weeks and nothing can discourage me now.
Sports tokens might not have much value right now but who knows what will happen in the next hours, days, weeks, months, and even years? We can't predict just like we couldn't predict that doge shit coin could moon anytime soon.

I am sure those who hodl the coin even when others didn't see any value in it are jubilating now and finding ways to hodl more.
I am also seeing such a future for sports. Though I don't have sports tokens at the moment, but I know with time, I might be able to build it up if I am constant with posting and not losing hopes.

You have already hit 60m sports in just January when your goal was 65m for the entire year. That's massive, this shows that you can achieve over 150m like you said if you keep doing what you are doing presently.
I hope we heed to this advice and go store up some sports tokens so we don't end up regretting that we didn't stake sports.
I think this post just motivated me to step into the sportstalk social community again. Thank you!

A lot of great things are happening in Sports talk community so don't give up . I know the interaction is less but I think it will change once the price starts moving up . I personally give away upvotes for those who engage with me on my actifit post , that way I am trying to make the users engage .

That's always the case but its not the ideal thing. Engagement should precede price shift.

I hear you and I agree 100% but it's not the reality unfortunately . I often talk about how many are here just to reap the benefits and not whole heartedly do anything for the community .

That's why it's good for the early adopters and engagers to try their best to hodl assets when they're cheap so as to also reap the benefits of the bullish days ahead.

You are right . Many expect quick profits and that is why they don't succeed in making good amount of money . It takes patience .

Surely. Patience and "consistency" in action heals it all.

Oh, that's great then! I think I will have to follow you up and start engaging in the community again. I like it when hard work is rewarded. Thanks for the encouragement.
I am sure when the price is up, it will push the interaction further.

Don't mention :) If you need any help over there , let me know I will be glad to help .

Where are you posting exactly? On Leo or Sports. Every time my LEO or SPORTS accounts hit 100% or close I start curating and I'm done about two hours later. So much reading lol. If you're posting content, I want to read it!

On Hive, Leo, and sports.
Lol, I understand how it feels to read all those contents and curate.
Sadly some curator don't even spare their time to read some contents

I know what you mean. You can't vote for just anything or else you're not part of the path to improvement.

I just went through your blog to see only 4 posts and you shouldn't complain of rewards and engagement. Go there and engage others and you'll have engagement in return. As for rewards, create typical sports content and see the difference in your rewards. Actifits are not typical sports posts so would not earn much rewards. I've give you a follow with my curation account and would be glad to give a whale upvote should you create quality sports piece.

@zanoz
about 2 years ago (Edited)

Fine, your resolve to up your engagement and content creation game. Your engagement on this post alone has earned you over 12,000 SPORTS. I think that's a great way to start.

Wow! That's a really good way to kick start. I can't wait to dive right in. Thank you!
I am certainly gonna up the game lol

The first think I thought about after seeing Doge price pump is SPORTS . If it can happen to Doge ( which is a joke coin ) SPORTS can see a future like that too .
60M is amazing , how much SPORTS does 100% upvote give you ?

Really surprising to see the DOGE bull and that's why i'm glued to my SPORTS. 60 million stake gives about 20k tokens in upvote.

Damn that is amazing :) Congrats on the milestone , I am sure you will reach the next target of yours soon.

Thanks very much. See you too at the top!

Great to see that you keep staking. Really a sport whale! :D

Thanks. there are other great Hivers with over 30 million SPORTS in stake. We all can attain this level. For me, a good proportion is earned.

Youve been so amazing with this thing and I give it up to you.

Reaching 60m sports is something many think wouldn't be possible. You've made it possible now.