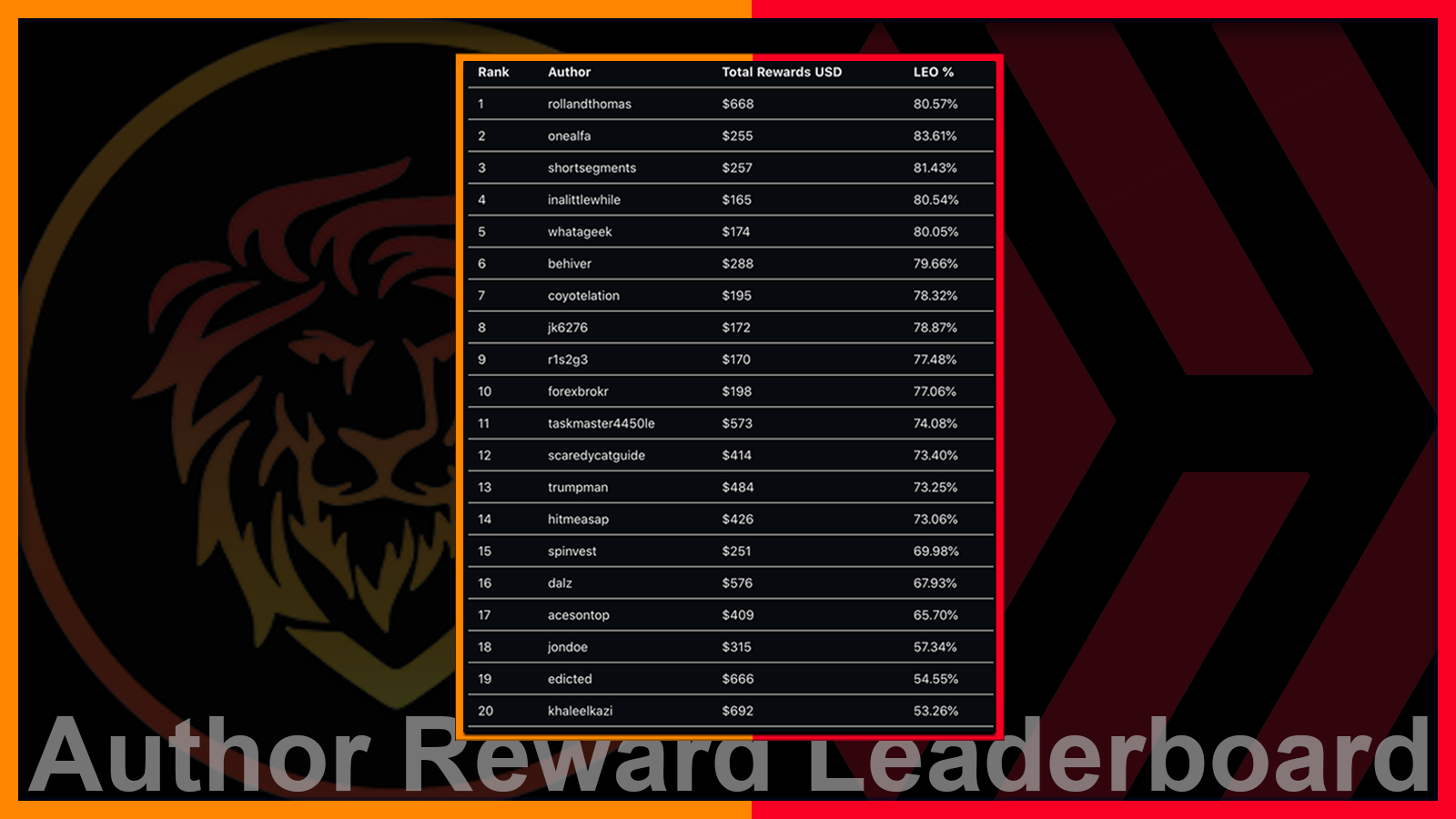 As I read yesterday's LeoFinance update on author reward leaderboard, I noticed that this is probably the first time my name missed since the monthly update of this stat started. I was motivated to roundup my rest days after the tedius project I undertook a week ago. I just needed the rest after many runarounds and LEO earnings was of great support (that's a story for another day).

Looking back at how the flip in rewards between LEO and HIVE stated in this post, I agree with @khaleelkazi that this trend has come to stay and the ratio would further grow to the highs of 95% and more in the coming months when LEO finally finds it way into exchanges like Binance, Bittrex etc.

I pride to identify with the truth that LEO pays more than HIVE as per authorship rewards when it comes to cryptocurrency and finance posts. Anything short of this would be wrong as LEO is dedicated to the core of finance while HIVE supports general content genres. As a mother token, HIVE still gains the honour of birthing second layer tokens that gives so much value to humanity and continuously brings more new users to the Hive blockchain. 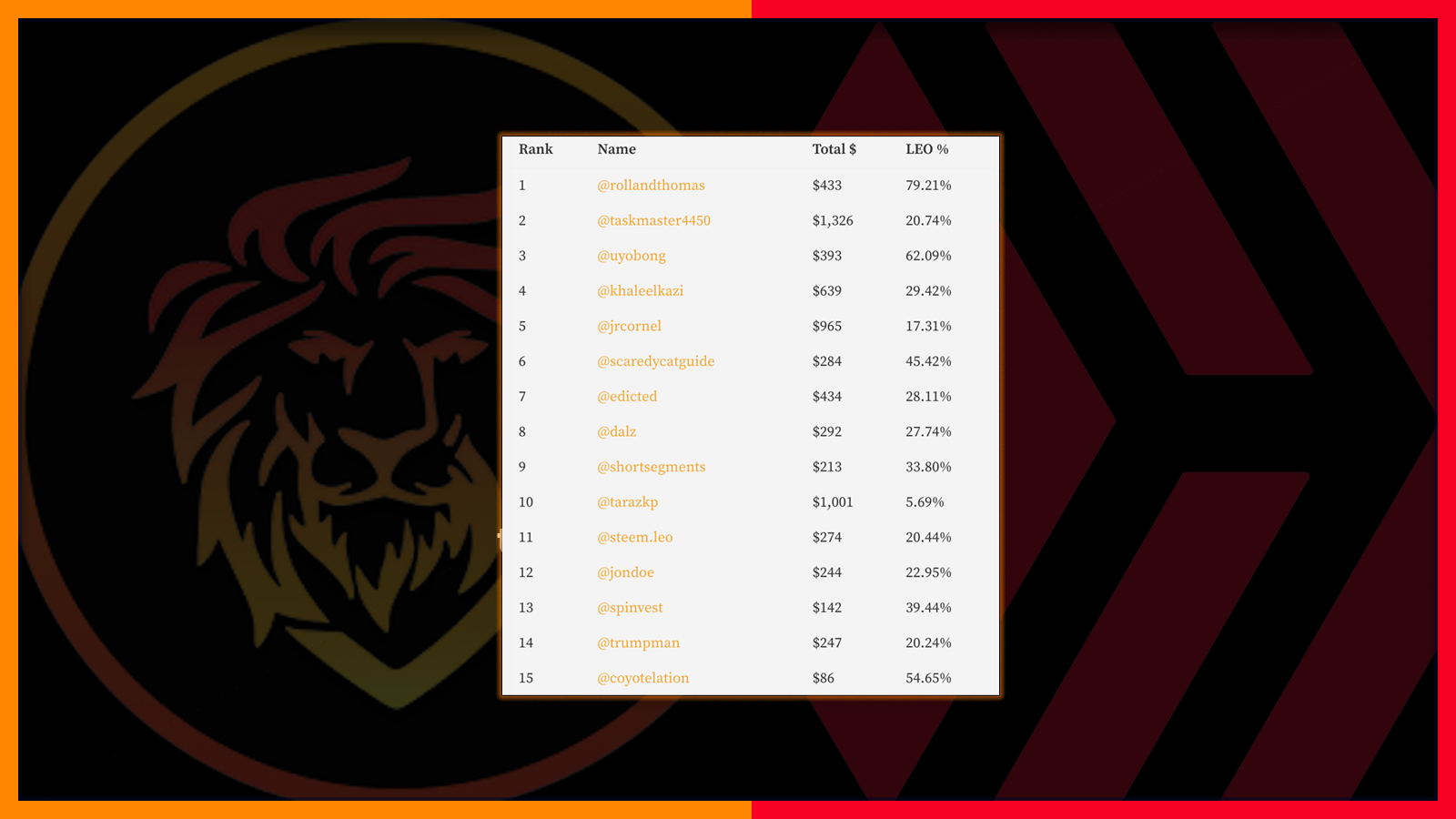 Looking above at the first chart for the month of JUNE 2020 where I ranked top 3rd LEO earner ($244) with 62.09% contribution of LEO to my total earnings over the month, the value kept increasing in the following months. This actually happened when the price of LEO was $0.047, that is 5.3 times of what it is today.

In face, I am one of the Foremost Hive Users who counted 4-digit Dollars with LEO Earnings. Interestingly, this was the first time my account would hold a 4-digit worth of dollar at a single time and the balance had since stayed till date as it approaches a 5-digit value.

It may sound quite insignificant to some, but it means a lot to me as a person as this has helped in numerous way financially in a year like 2020 with is uniqueness as far as economy was concerned. I sincerly thank Khal, the team of developers and awesome curators who had been my backbone while the growth lasted.

I remember how discouraging it was in the first two years on Hive when you'll put in several hours of work to put up a writing and it gets lost in the crowd of many Hive posts and ends up with 1 cent or no reward. The advent of second layer tokens changed the narrative as value started coming for every Hive user through the second layer token. LEO's growth crowned it all.

Authors who post consistently and build their brand on the Hive blockchain through https://leofinance.io are the most rewarded users on the entire chain. Not only do they earn their normal HIVE rewards, they're actually earning LEO rewards that are - in many cases - more than 3x as valuable as the HIVE they're getting.

Today, we can see the improved activities in the leofinance.io community and this can only increase in the coming days. The nine month academic strike in my country has been called up and school would resume soon after the Christmas and New year break. This would mark another surge for a new wave o growth in the LeoFinance as my promotional project would have a smooth course.

It's simply amazing to see about $7,700 was shared among 25 authors for sharing their thoughts on finance, cryptocurrency and economics in the 30 days of November. We actually see a shift in wealth creating options from hard word=k to socializing. Soon, we;ll have writers make it into the list of the world's billionaires and this would be made possible with cryptocurrency.

Congratulations to all passionate authors on LeoFinance who made the November's update an interesting one for LEO and the LeoFinance community. You simply deserved it for your dedication and hardwork. O'll be excited to make it to the list by the end of January 2021 and I'll never stop sharing my testimonials.

All of these testimonials about LEO was not possible without a cause. There has been a purposeful build of the community by the lead in terms of development and other members responding by improving engagement. This stops at nothing but brings more investors to the project as we see on daily basis.

The future can only get better!

LeoFinance is a blockchain-based social media community for Crypto & Finance content creators. Our tokenized app allows users and creators to engage and share content on the blockchain while earning cryptocurrency rewards.

Support LeoInfra's Onboarding Efforts by Delegating HP to @leo.voter (Currently at 2.2M HP). This is used to Claim Accounts and Delegate RCs to Newly Onboarded Users

You are a shining example of what takes place on Leofinance and the potential of Hive in general.

If people could see how this process can be repeated by dozens of communities, then they would know this is just the tip of the iceberg.

You are a shining example of what takes place on Leofinance and the potential of Hive in general.

Thank you very much Sir. All I do is refer people to my blogs to show them how much value has been derived. My Six months of dedicated posting on LeoFinance yielded more than THREE years of work with my credentials would fetch in a government job.

If people could see how this process can be repeated by dozens of communities, then they would know this is just the tip of the iceberg.

Hopefully, this would happen. Many communities are now keenly understudying LeoFinance and some are already trying to replicate the development here. That's just the beginning. Second layer tokens and communities are redefining Hive blockchain.

My Six months of dedicated posting on LeoFinance yielded more than THREE years of work with my credentials would fetch in a government job.

This is an important statement.

The other communities have to focus upon development and engagement. These are the two things that will make one successful. You look at most of the tribes, very little engagement and the site looks the same as 2 years ago.

Wow
Your words are a motivation to newbies like me, I hope to get to a point where I can top the chart too. All the best, I wish you greater success

Hi bro, welcome to Hive and the LeoFinance community. There are lots of my personal testimonies about LeoFinance that would inspire you into more dedicated work. It's not just fun here, on can build a beautiful financial future on this blockchain.

It is the testimony of the fact that the community is doing good/great with the influx of new users who are actively engaging. I love to read your posts. Keep them coming.

Really great to read. It seems like those who were consistent and diligent have been rewarded with an accumulation of tokens which will now increase in value. Its nice to realize actual earnings online.

You have Always been a great person on the platform that I admire most.

Keep up the good work. Hope to see more of your posts next year

It shows the power of community and dedication of team behind it. Good content must get you a good livie. Leo is proving it.

Congratulations! I think this week my LEO earnings exceeded Hive. This isn't to bash one over the other or flex the few tiny dollars I made. I'm barely making double digits. I have to be super grateful to @onealfa.leo @taskmaster4450le @empoderat @dalz and few other big stake holders for really moving the needle for me on LEO.

They have been great curators. Sometimes you write a great piece and it goes mostly unnoticed. Sometimes you try to engage in comments and earn more what my last 10 posts on LEO did. After all curators are humans with much going on their lives. On LEO they've been doing a great job supporting the community. Soon I'll reach my Orca status on LEO. I'll be proud to say I never sold LEO & never powered down LEO. I earned most of it from posting.

I wish all the newcomers will be able to get good exposure for their quality work. Sometimes life is just a numbers game. Here's to your motivation:

Such a great accomplishment, @uyobong.

Hello my friend @uyobong
You are doing great work with some tier 2 tokens and with Leo as well. Congrats for making it happen and you're a great example for many to follow.

we can see the improved activities in the leofinance.io community and this can only increase in the coming days

true and its because of the efforts made by the community.

Good for you man! I really appreciate your optimism and thank you for motivating us!

And as the testimonies keeps coming it serves as a motivation to many other Leo and hive users out here.
One thing I have come to know is that you never slack in whatever you put your mind to.
It's yet another achievement, one to stand proud of course
Keep winning Sir and keep motivating.

Congrats, man! Keep on going because you inspire many people!

Congratulations man and to everyone making a success from blogging on Leo / hive. These are the stories that inspire other content creators to keep going and know what it takes to be successful. It's not a quick win but long term effort that will get rewarded in the end.

Keep it up and hope to see your name there in the next month!

It’s a great feeling when someone, or a group, supports and ascribes value to content you create. I’m greatful for HIvE and LEO for their support.