570 Matches Played in Rabona Game - How Profitable can the Journey be? This post was to have been submitted yesterday, but for some busy schedules off the chain. It is thrilling to see that FC Creativians have successfully completed 570 matches in Rabona game built on on the Hive blockchain. With 42% win ratio, the statsistics show that the team has won 237 matches while losing 205 matches. Many Thanks to the players that have made it happen.

My present squad seems to be the best so far and I'm glad to retain them despite their high salary. Some are retiring yet with some good achievements and reputation. I think I'm just beginning to scratch the gold in player management.

At this point, we are participating in the 20th season and thanks at the League 2 level. I had mentioned a few days ago that at the end of this league, I should be moving to League 1 and in a few days should hot the 1 million Fan milestone.

The funny part of the 19th season report is that we again missed relegation narrowly. Finishing with 41 points, just 1 point and rank away from relegation. I couldn't be happier as the efforts in the last three seasons to build my fan base would have been a waste.

The next push is to ensure that I have at least 500k regional fans out of which would have to attend my matches to increase my ticketing, car park and hotel revenue. The just concluded Season was a tough one and the teams therein were good. I trust that my boys could do better. 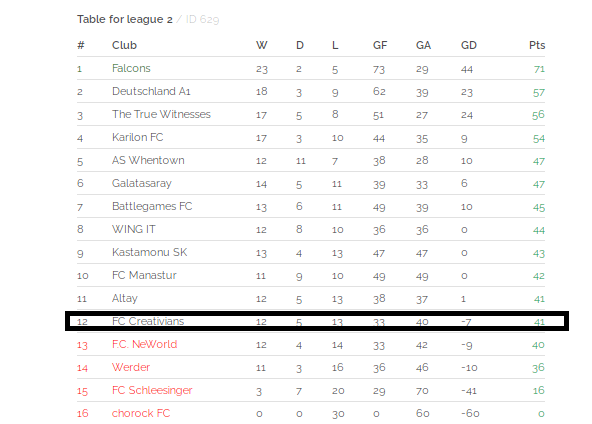 With 61 Overall Strength, the rank of my team is gradually growing though with attendants cost of player salary. I wish to see a time that i would have 70% of my players above the 70 OS mark. Then, I should be a League 1 winner.

The whole experience looks better and better by each day passing and I can only see better days ahead. My strategy is to get the team to a sustainable level in the next Five seasons. By this, I mean being able to make a net earning of at least 5 million RBN at the end of each season, then, we'll start seeing how the tokenomics of RBN could improve.

I anticipate a time that such net earnings could reach $10 at least and that would mean $40 in one month. That may sound quite huge but we are in the beginning of things and fun is the best way to earn on Hive in the recent days.

With my assets like Stadium capacity expanding to 6k as well as catering and Shop capacity to 1k, I see a 5 million RBN token possible. We ended up with a net of 441,310 RBN out of 3,671,334 RBN earned. That means our expenses was on the high, especially with player salary and training. I hope that doubling the ticket and merchandise earnings could take care of that. We can only hope for better days ahead.

Rabona is a massive multiplayer online soccer management game. Decide how to build and develop your team, take on the role of the head coach of your team, and manage the financials of your club. Lead your club to the top of the league and become the champion!

Please to use my referral link - https://rabona.io?ref=uyobong to register for the next season so you can earn 25,000 RBN tokens.

I also intend to expand my stadium to level 9 and I believe that from there, I will have a good increase in revenue. Currently I pay about 130k RBN of wages, quite high but with the advanced stage, this will not be so much of a problem.

Sometimes my friend, I usually go to the section of players who have been excluded or expired and from time to time we can sign good players and that's how I increased my team's lv and I believe that it will be able to do the same.

Sometimes my friend, I usually go to the section of players who have been excluded or expired and from time to time we can sign good players and that's how I increased my team's lv and I believe that it will be able to do the same.

Oh thanks friend for this advice. I'll try that out. How'e your team doing so far?

Congrats, you were upvoted from this account because you were in Top 25 engagers yesterday on Sportstalksocial .
You made a total of 1 comments and talked to 1 different authors .
Your rank is 7 .
For more details about this project please read here - link to announcement post
You can also delegate and get weekly payouts.

Just a few questions regarding the game for when I do decide to play the game (paid for Hash Kings so I am saving up some HBD and HIVE again). For someone who just started, what are the biggest lessons you suggest that I do? I would prefer not to end up having to throw in more money just to learn the game.

Does it pay Hive rewards of any sort? Like how Dcity pays in Hive for being in top 400 .

Also do you play Dcity?

Does it work on phone.. I have been trying to join but its not going through.