After a few weeks of massive growth of Splinterlands, we have touched the #1 place a few times but this time, we have well and truely stayed in the #1 place on Dappradar under the games category. Alien World have been leading the charts of many weeks although I don't really see it a game but for us to surpass ones like AW, Axie, Upland is pretty amazing. There are loads of things happened in the game including the new reward cards, SPS staking, SPS airdrops all contribute to the increase of of players to our game. With Chaos Legion coming out soon (new card packs), implementation of land, more use case of SPS to be added, the game will only get better and better. In the top 10 games on the Dappradar list, Splinterlands is the only game on the Hive blockchain and this will sure bring some attention to Hive and hopefully in turn bring some new users and investors on. It is like a snowball effect and we are now seeing the results to it. 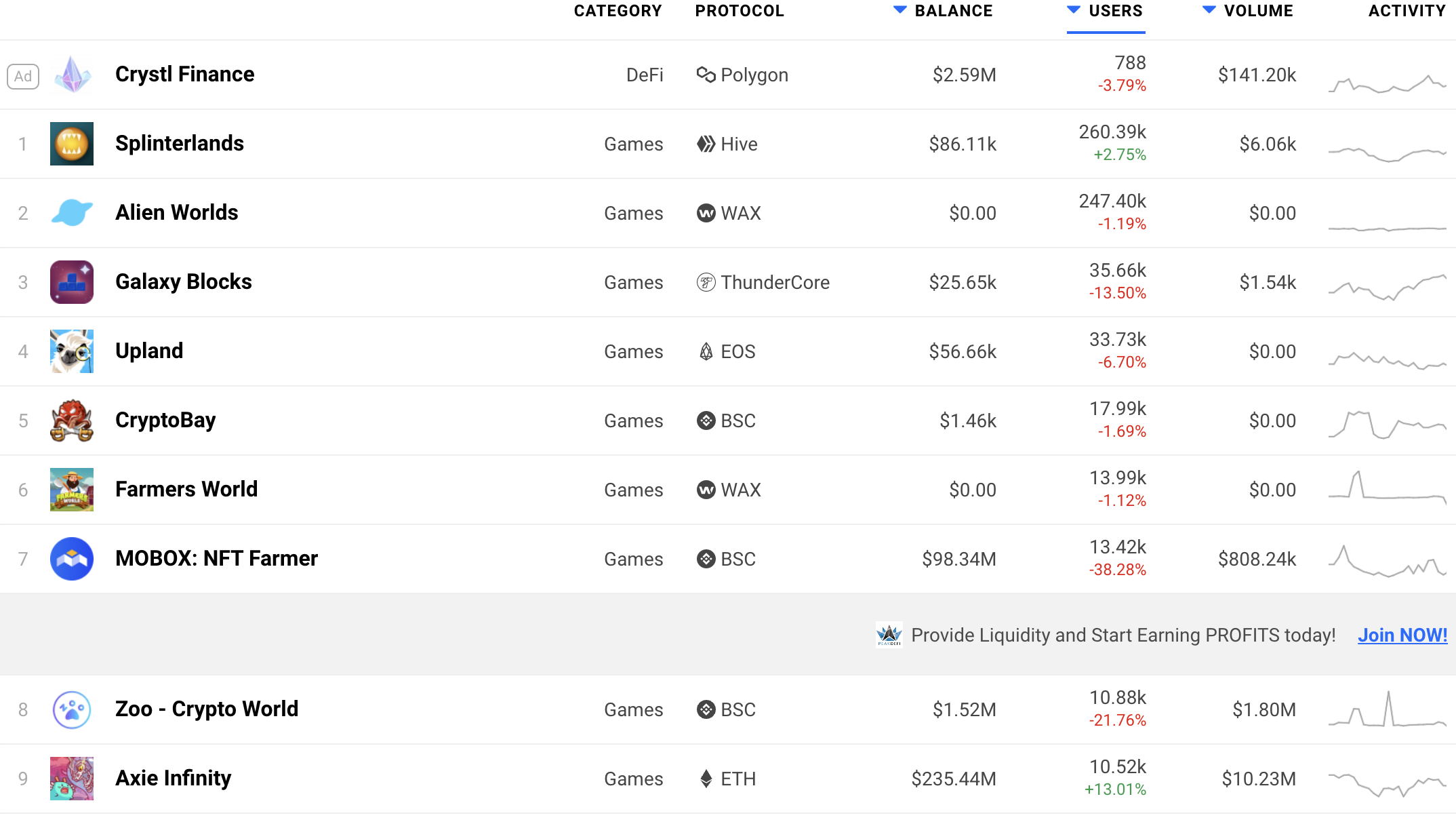 On the topic of SPS, the apr for SPS staking is still an attractive, 105% at the time of writing. It is well above the % given on Pancakeswap staking Cake for SPS so I don't see why anyone wouldn't stake some SPS to earn some nice rewards. The power of compounding is important here as there are no transaction fees to each transaction (except for the use of RC) so you can claim and stake numerous times a day to make every cent count. In fact, I am surprised to see the nice return even at 54 days since the first airdrop we received, every SPS counts. Another perk of staking is you will be able to get into the presale of Chaos Legions. During the previous AMAs, we have been told that the only way to get into the presale of the new card packs is to stake your SPS. Although no numbers have been announced yet, but staking means you have that chance. Do you want to take part in the presale? Stake your SPS :)

The past week I have been pretty excited about the new reward cards. I have picked a few I liked which I thought might be useful for my team but after having a good look at them over the past week, I have changed my mind and might change them around. I have decided not to buy any yet and see how many I can get through chests and if I do get a bit impatient, I might get a few to level them up quickly. I will probably give myself a few weeks before deciding to spend some money on it as I do want to save my funds for the card packs instead. I find the reward cards this time are all useful in their own way and in some instances, will strengthen my team a little bit hopefully give me the extra edge to move up the ladder a little higher.

You know what goes well with gaming, !PIZZA

@travelgirl! I sent you a slice of $PIZZA on behalf of @cooperclub.

Yeah, at the moment Splinterlands gains a lot of players and the 105% are really good at the moment. Vut lets look how it goes if we fell under this 80% from Cake. Until that we need a new Update with content 😅

Ive been claiming and staking like a hound lol.

yeah 100%+ is still very very good considering its over 50 days now, glad you are staking :)

I am always looking for good projects ! Seems aw is quite boring, but don't know how to earn good there as it is the top in wax blockchain and I may try it out again, and for upland, seems it is not a play to earn game in general ! Axie infinity is a bit boring but it is highly profitable ! Hope anyone can help explain more of good play to earn game! Thx

Join here and check out the basic idea of the game https://splinterlands.com/?p=gameplay. Get a spellbook for $10 and start playing and earn some DEC :)

Finally, SPS ranked No.1 of all blockchain games, well deserved!

we have been waiting for this!!!

Thanks for the detailed news about Splinterlands dApp Radar ranking and staking SPS. 105% APR is very impressive!

yah thats right, if you have any sps, stake them :)

I just went to PsnCakeSwap and staked some Cake to earn SPS. I think I will buy some more Cake to increase my SPS. I will also check for Farms

I'm claiming my SPS rewards daily and staking them instantly. The APR is just too good to not stake. I hope that the SPS price won't keep droping like today though, people need to understand that SPS is not just a way to make som quick $$$ but should be a long term investment. The perks of holding SPS (like pack presales, extra rewards, etc.) are really nice but a lot of people don't seem to see that and just dumping their SPS. Sad...