I have a tale to tell about Widows House, and that's beside the usual one of rotting boards, festering carpets, almost falling through floors, and copious pigeon shit.

A widow lived here briefly after the death of her husband. She abandoned the property and left all the belongings behind. 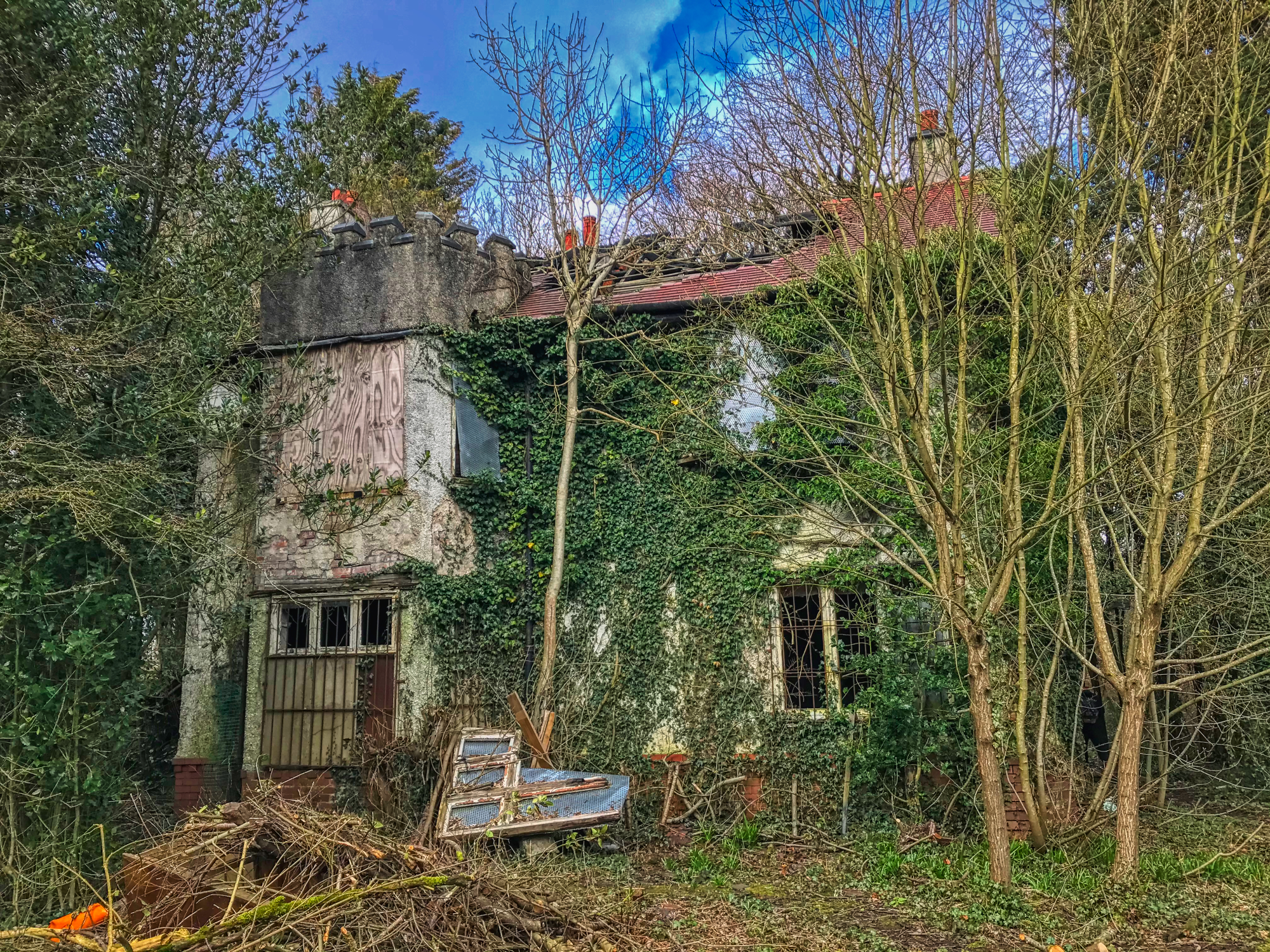 Thanks to @anidiotexplores who accommodated me, revealed the location, and relayed the story (below). I love old houses, even if they are in a terrible state such as this one, but a true story makes it so much better.

This happened so long ago that I cannot find a trace of evidence on the internet to substantiate the tale.

Once upon a time many years ago three teenage boys found an old house. It looked empty, they managed to gain access and entered the property.

It was full of old equipment, memories and on searching one of the boys found a tin with some money. Not a small amount, around £1000 in used banknotes.

What happened next was an argument. The boy who found the money was a greedy twat and wanted it all. The others disagreed and wanted to split the money three ways. #GreedyBoy snatched the cash and ran off. One of the other boys squealed to his parents, the cops got involved and marched around to #GreedyBoys house demanding the money.

‘We will take that stash and use it for our Christmas Beer fund.. err, find the owner and return it, of course,', stated a 7 foot tall PC Plod with his Tithead (English policemen who wear helmets that look like big tits) almost scraping the ceiling.

#GreedyBoy screamed and yelled but the money was forcibly extracted from the boys' fingers and reluctantly handed to the grinning Plod.

The boy later got a hiding from his parents for not giving them the cash so they could go down to the pub and get pissed.

You might think that Widows House is in some lost deep forest. It's in a suburb of a northern town in reality. 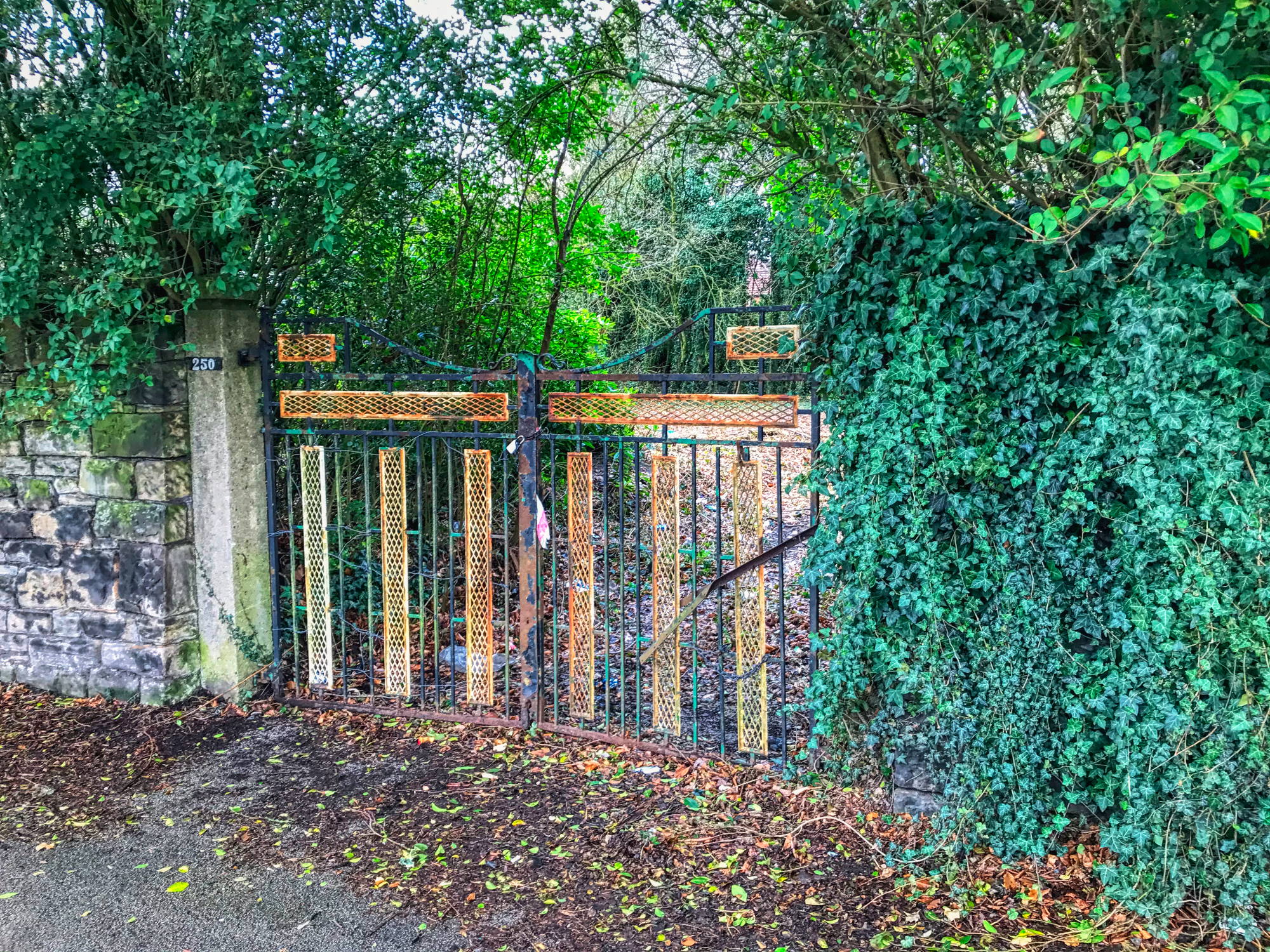 I scrambled to get over this gate but felt I was seen by some nosey woman in her front room across from it who was staring a little hard.

With that in mind, I entered with probably a lot more ease than the boys had years before through a glassless empty window, and with a little more haste than usual.

It was at this point I realised the bloody lighting has been left in the car. This was going to be a dark photograph session. 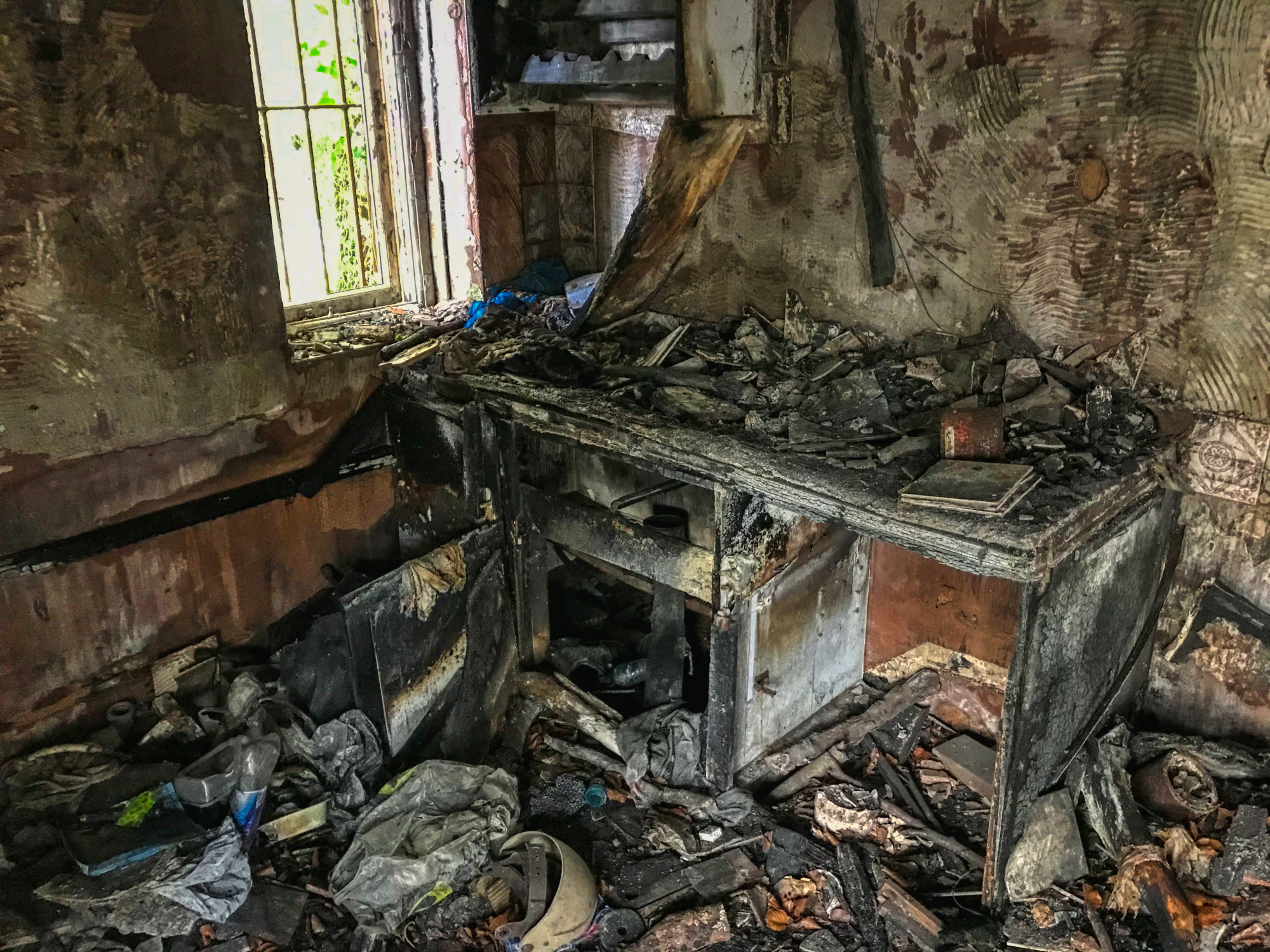 Widows House has been subjected to some burning in the past which was a shame as it looked like there may have been something to look at if it wasn't made up of charred ash. 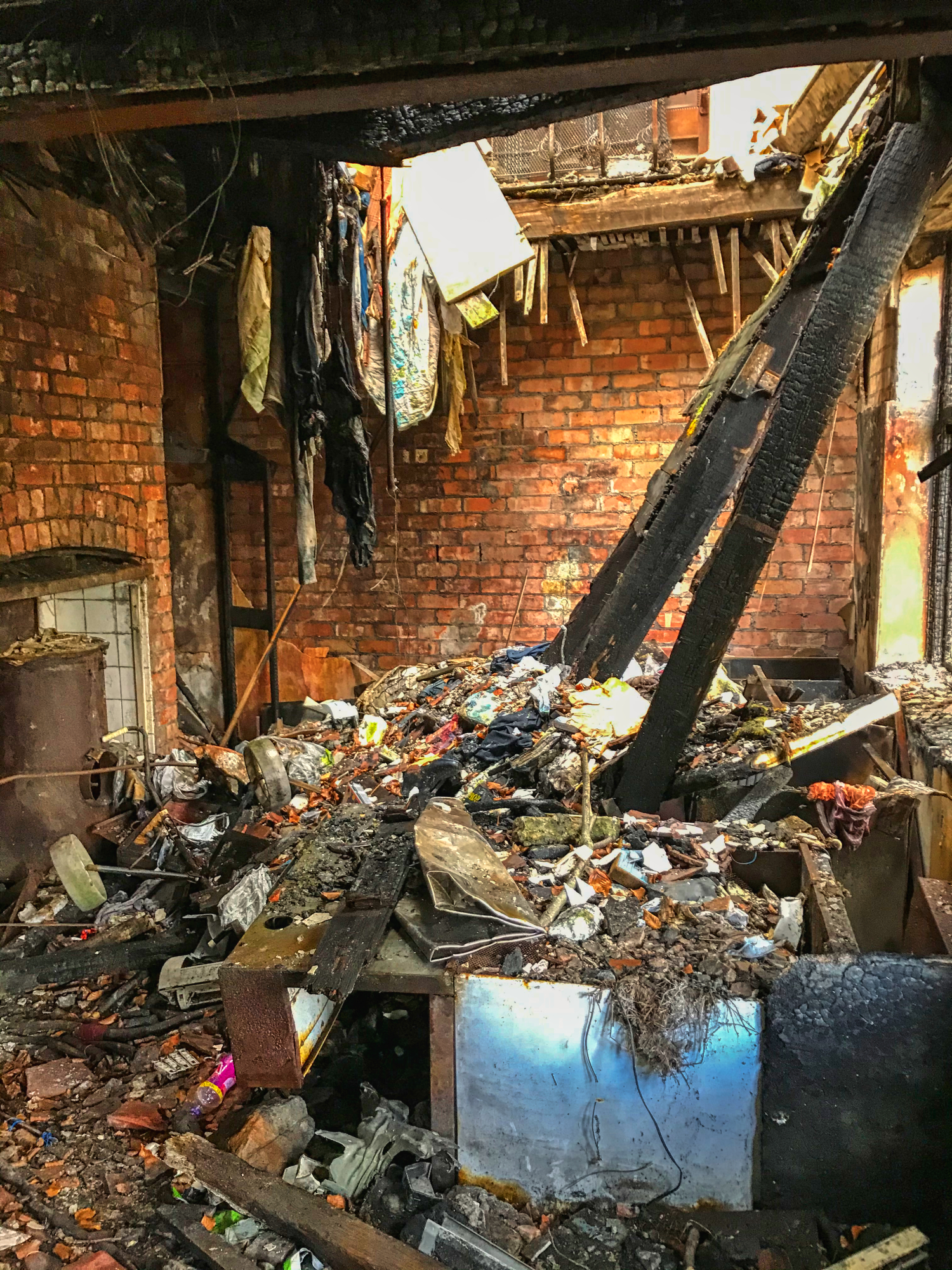 Clothes hanging down from the ceiling, and an upper storey that may not be safe to check out; the property was at the point of its contents being buried in the rubble. 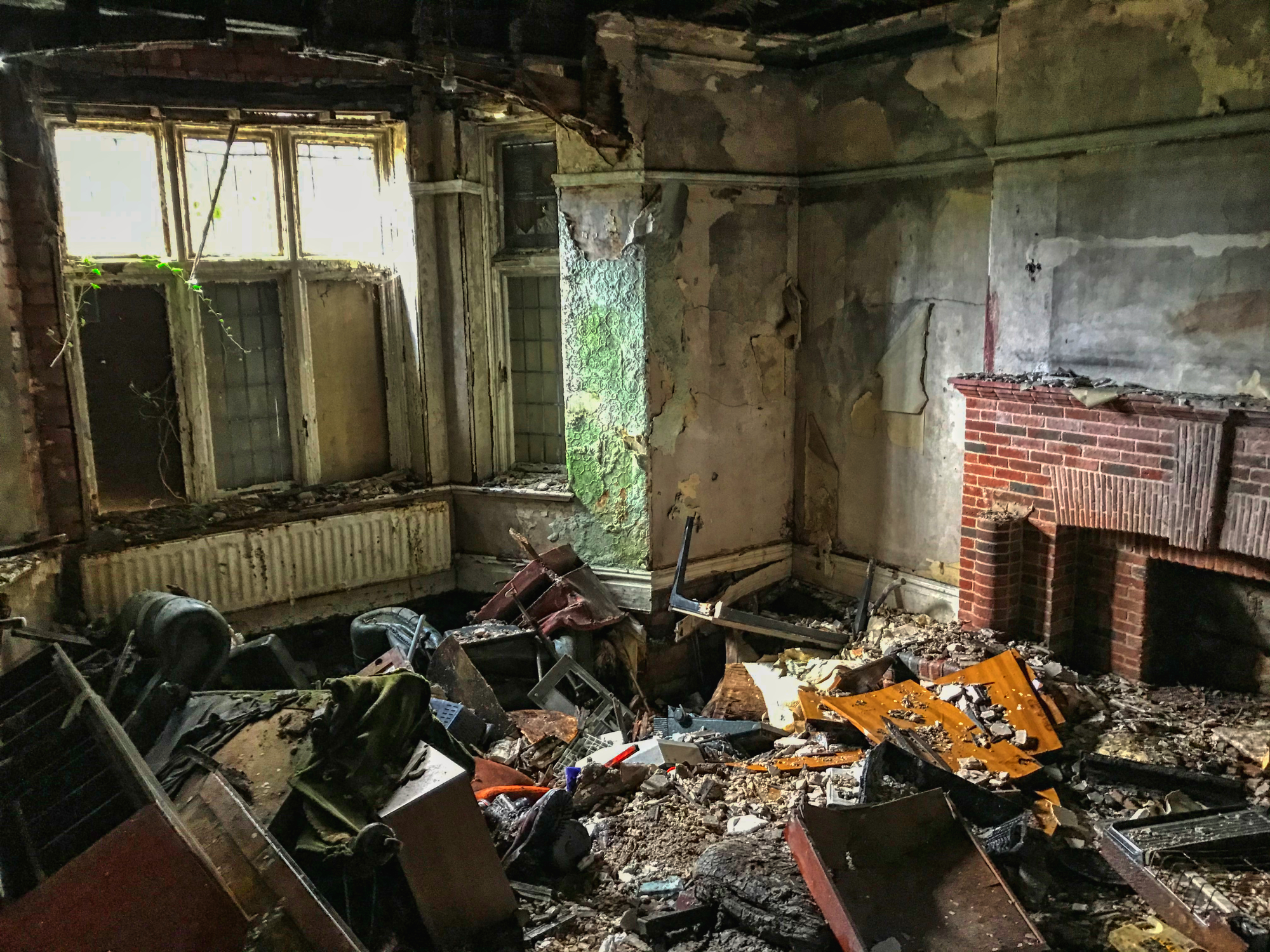 Some of the rooms were very sketchy even on the ground floor. I could see part of this was sinking into what was the basement. You never know what you are standing on; there could be fresh air underneath that bit of old carpet. You can see what I mean by this picture. 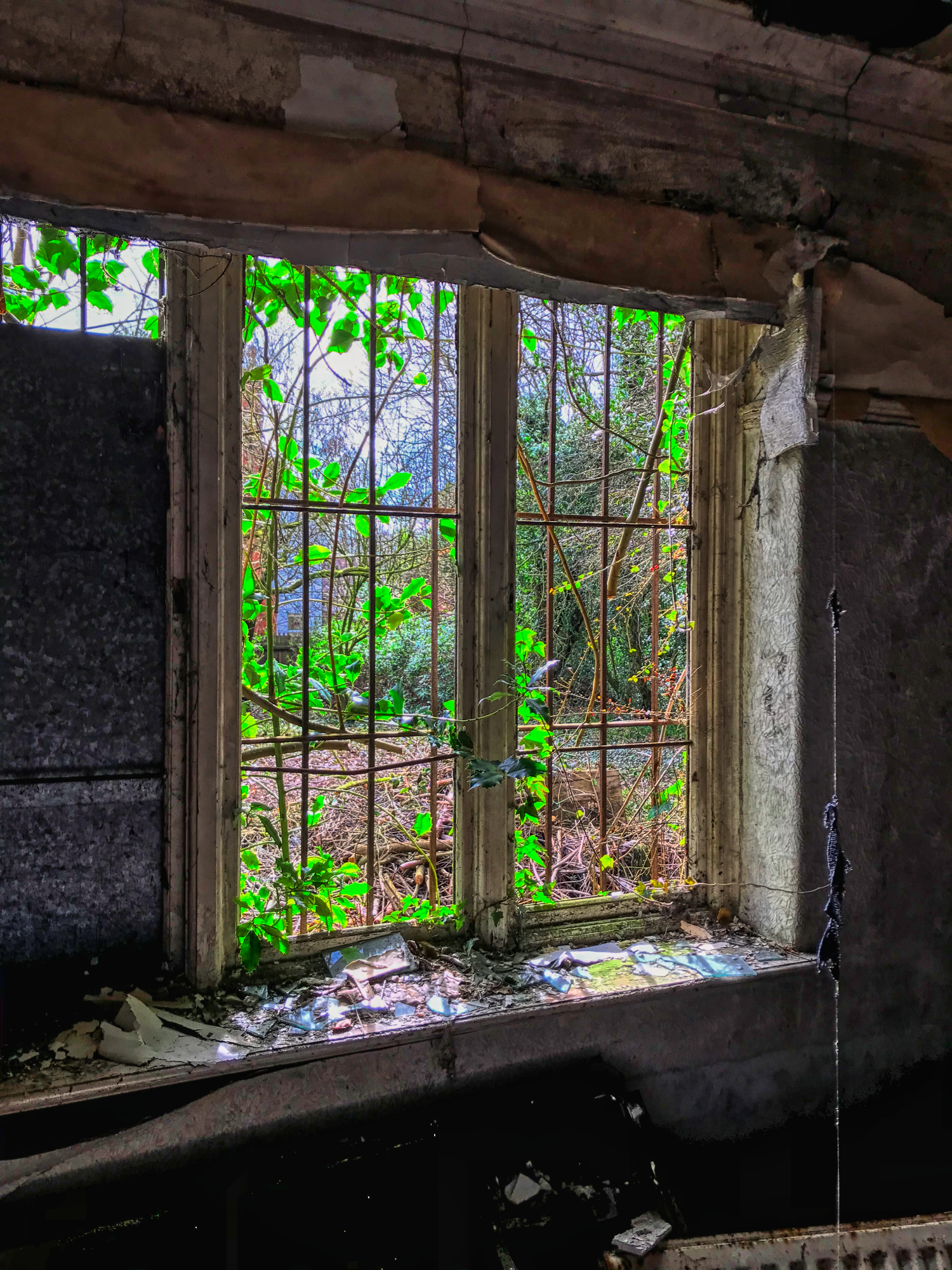 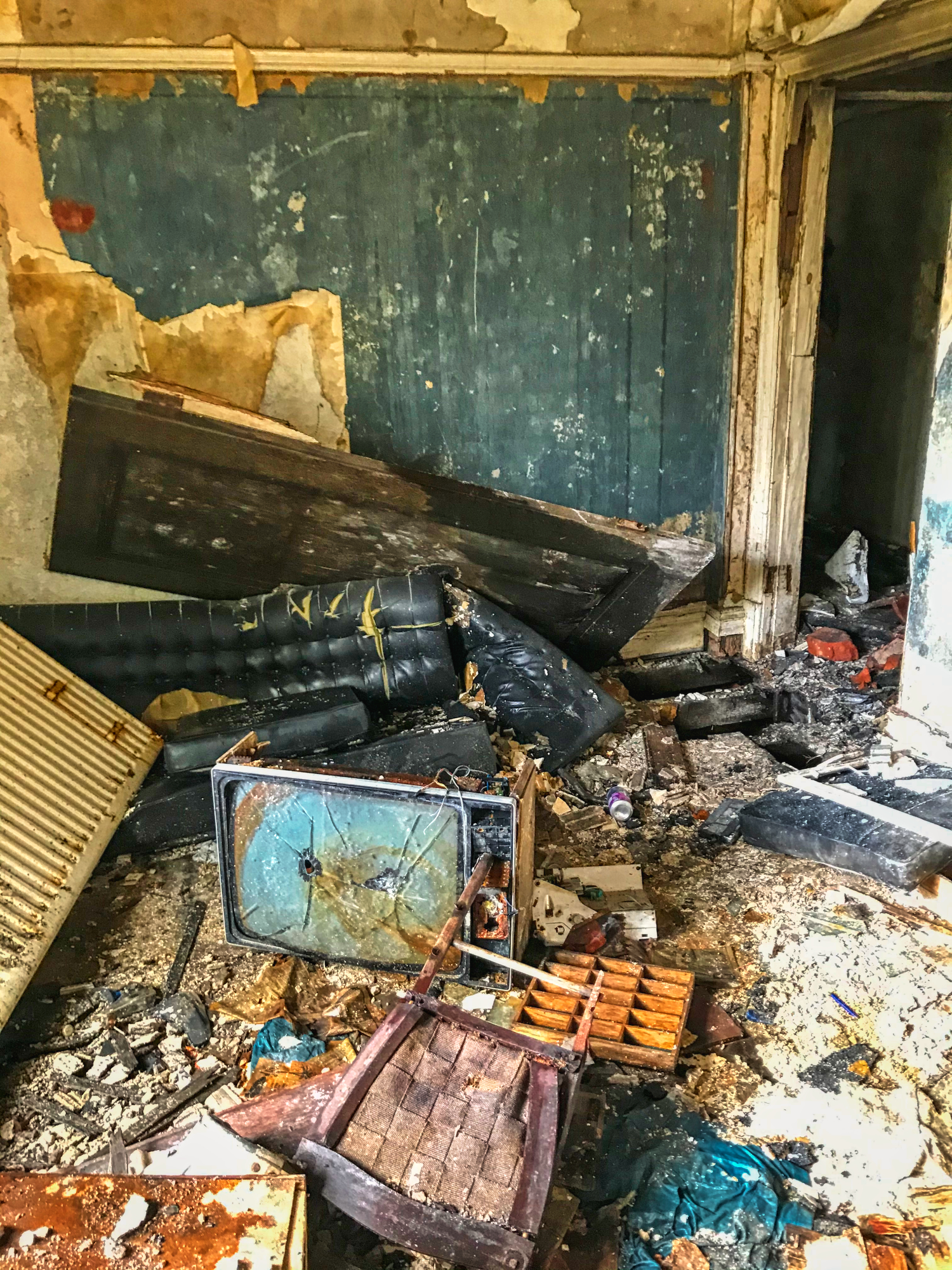 A leather sofa and a TV; I think we were maybe a few years too late with this one. 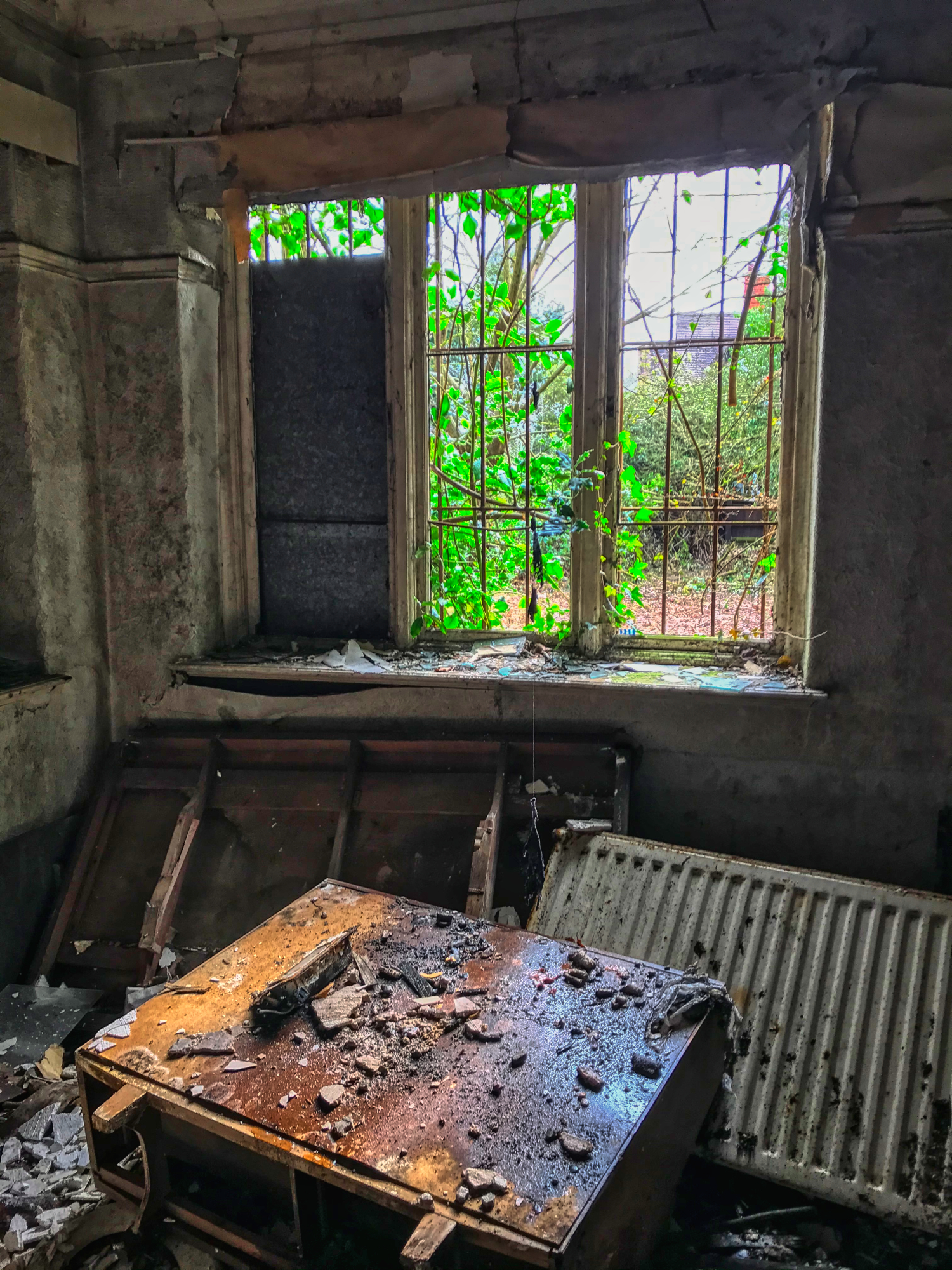 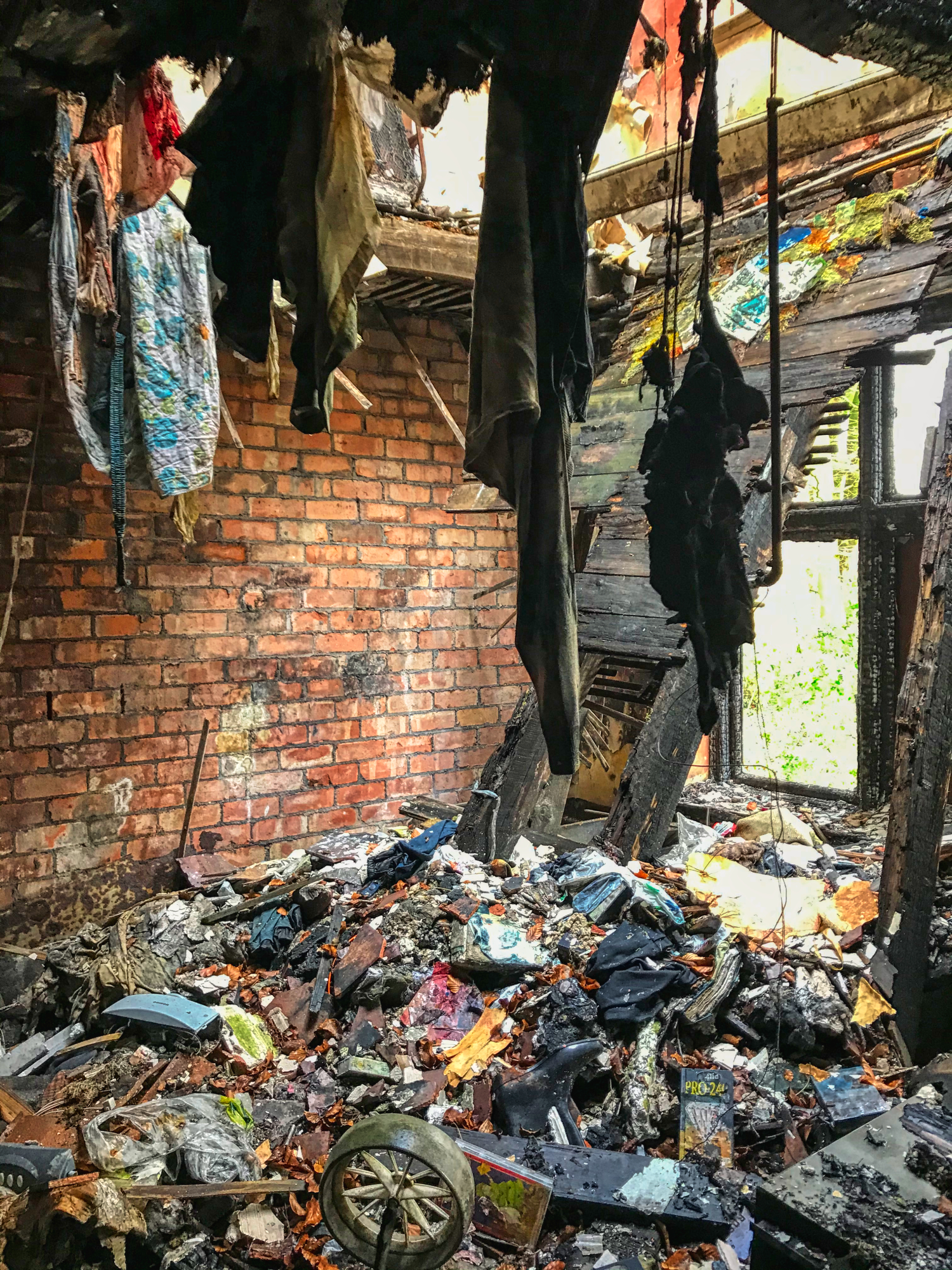 As well as the upper storey roof being compromised the roof proper was also gone. It did give me some light for my photographs though. 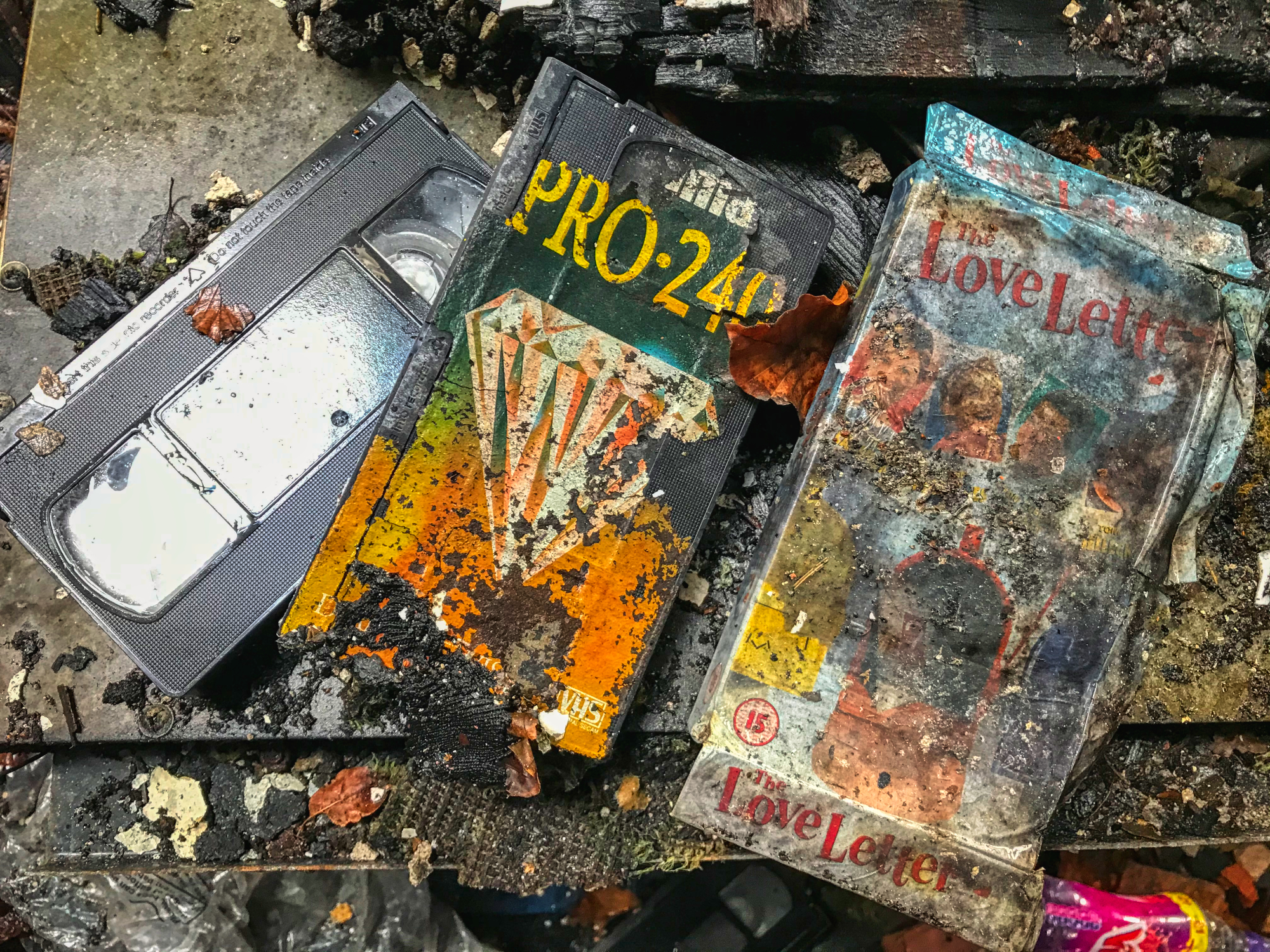 It's always nice to find something that shows evidence of human habitat. 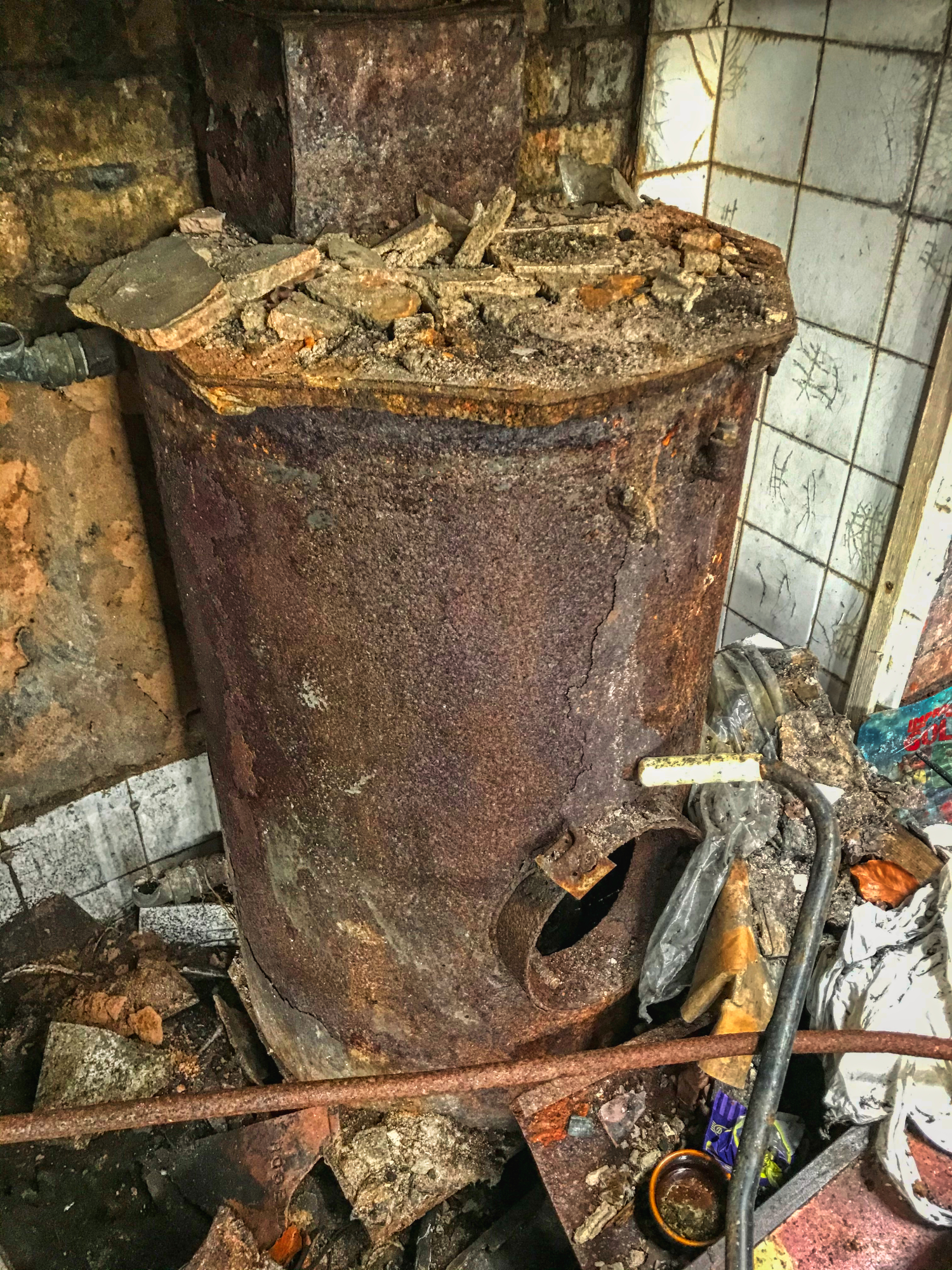 ...'@anidiotexplores admires the wonderful intricate décor on the fallen door to his left'...

Against my better judgement, I did go up the stairs which were caked with a mixture of roof files and pigeon shit. All you needed to do was avoid the massive holes and you might live to see another day. 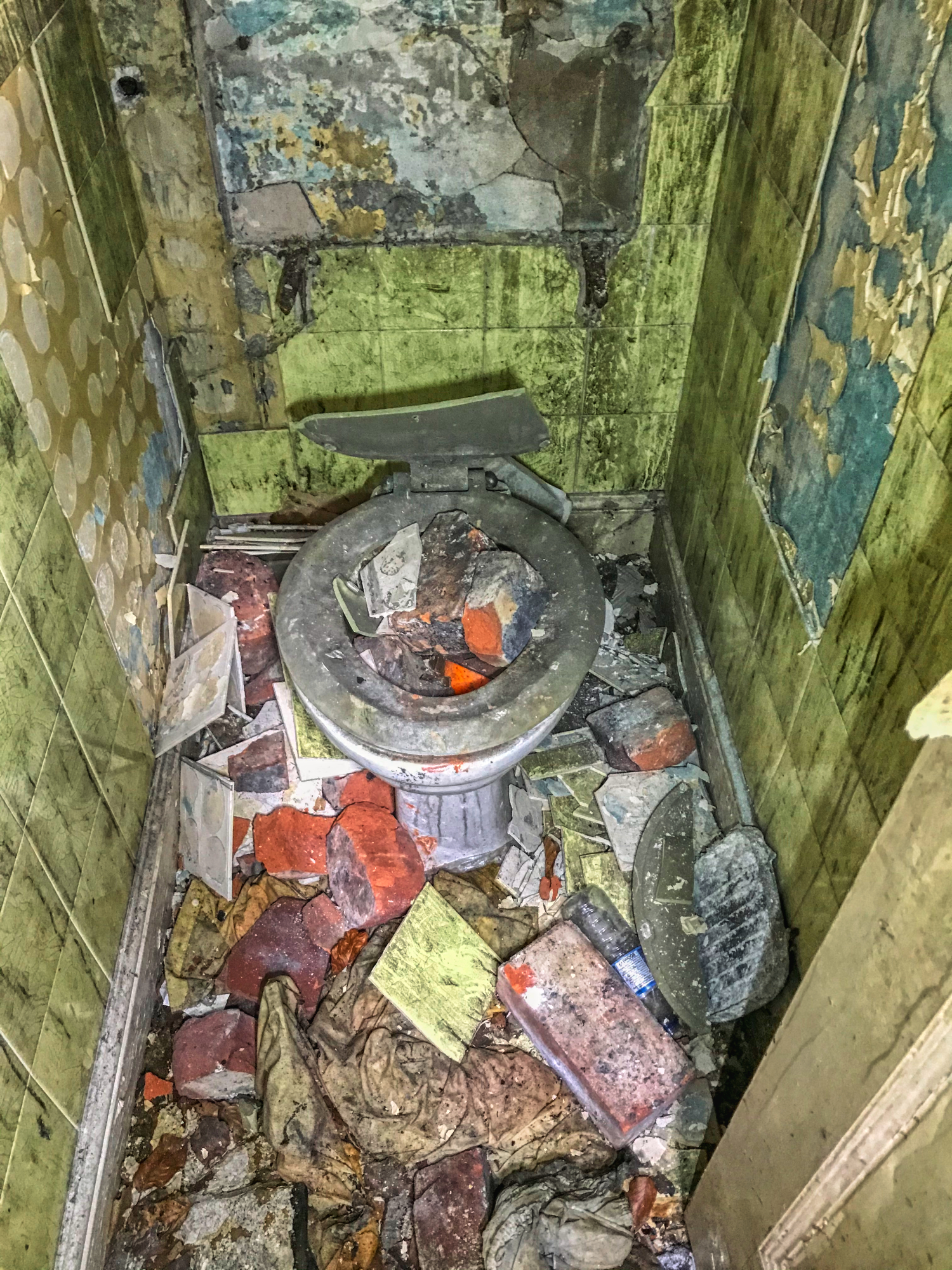 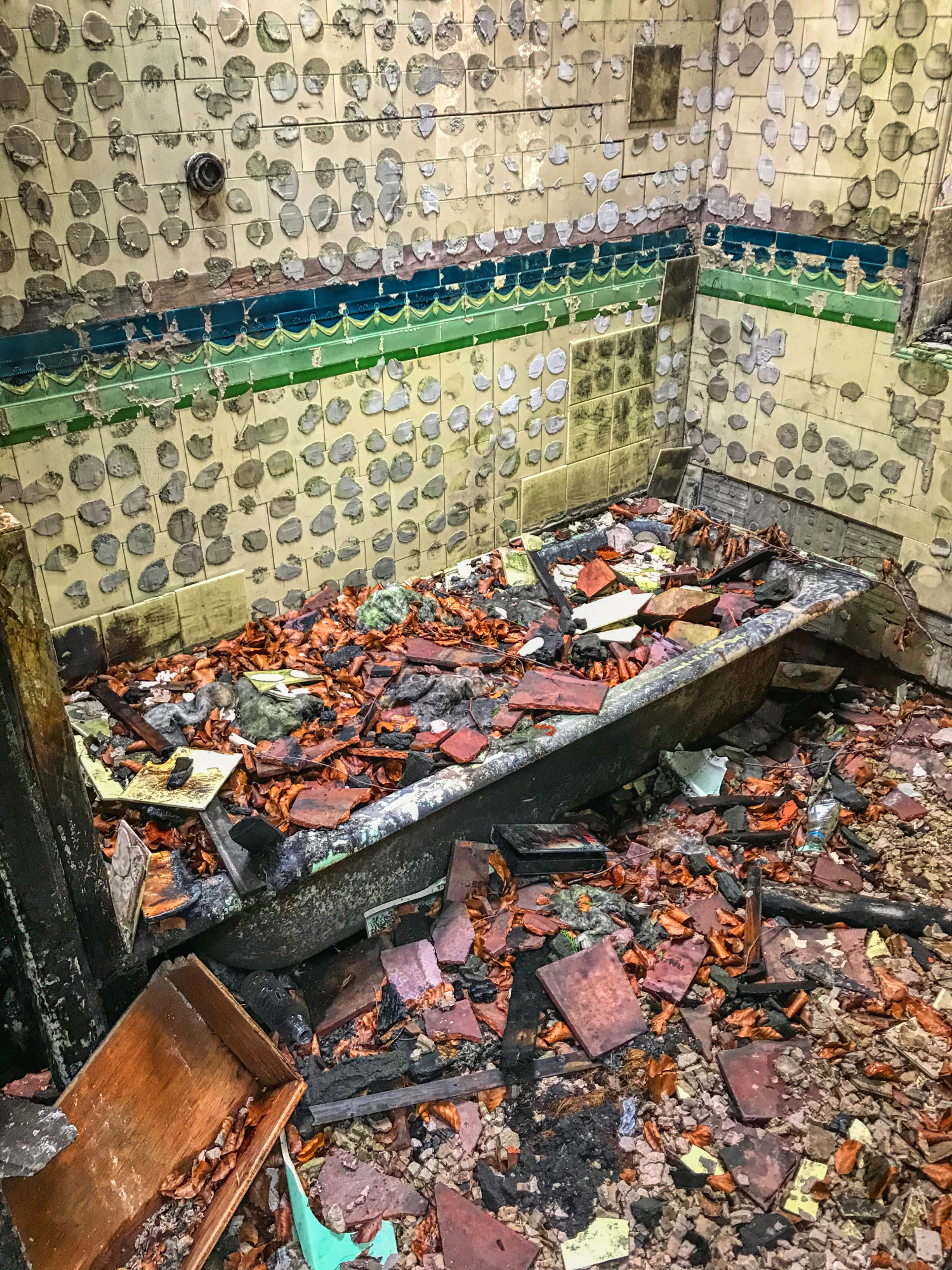 Both the shitter and bath were full of roof tiles and fallen masonry. 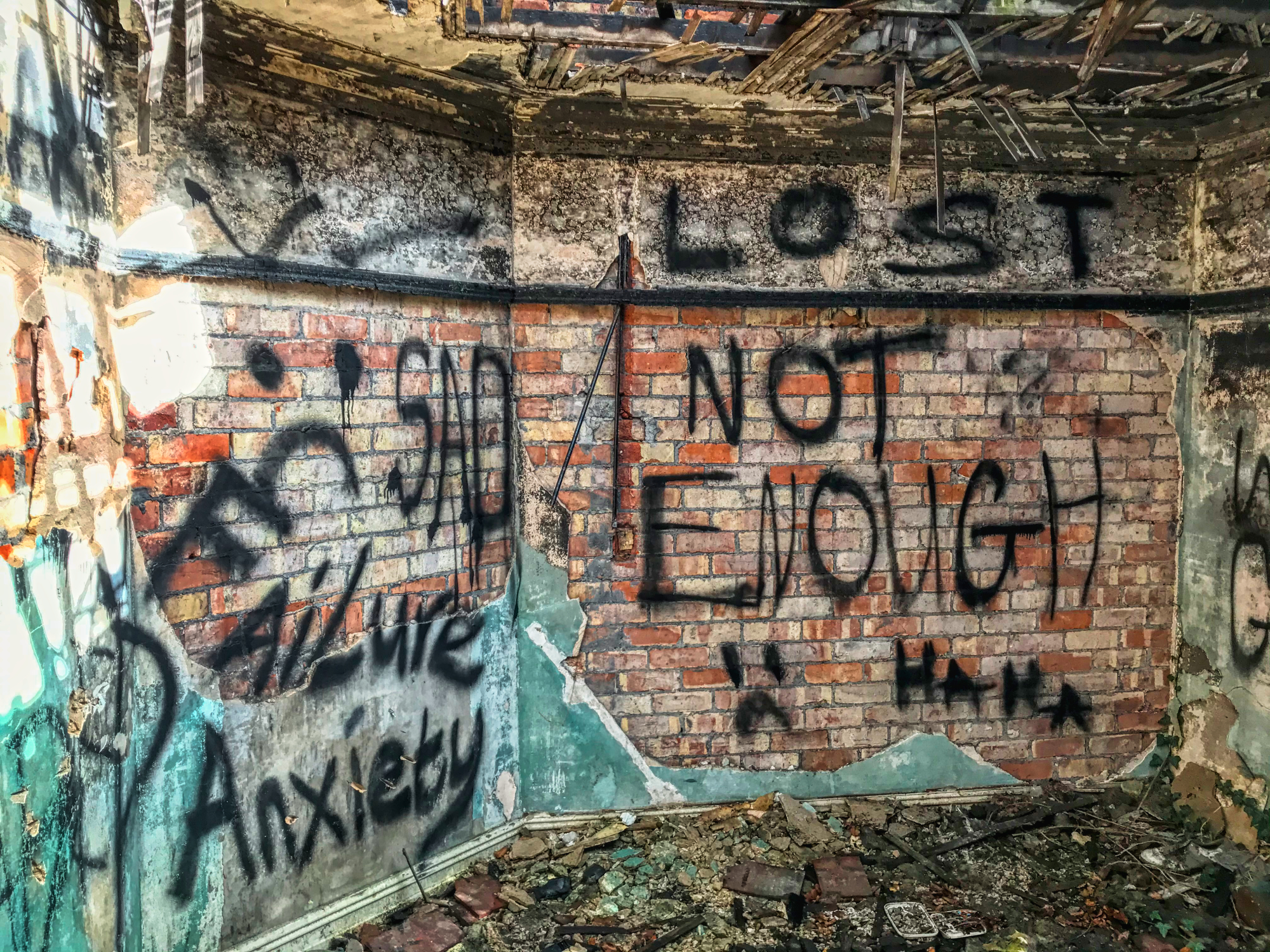 I was amazed to find that most of this upper floor was navigable with care, besides one room which no longer had a floor. 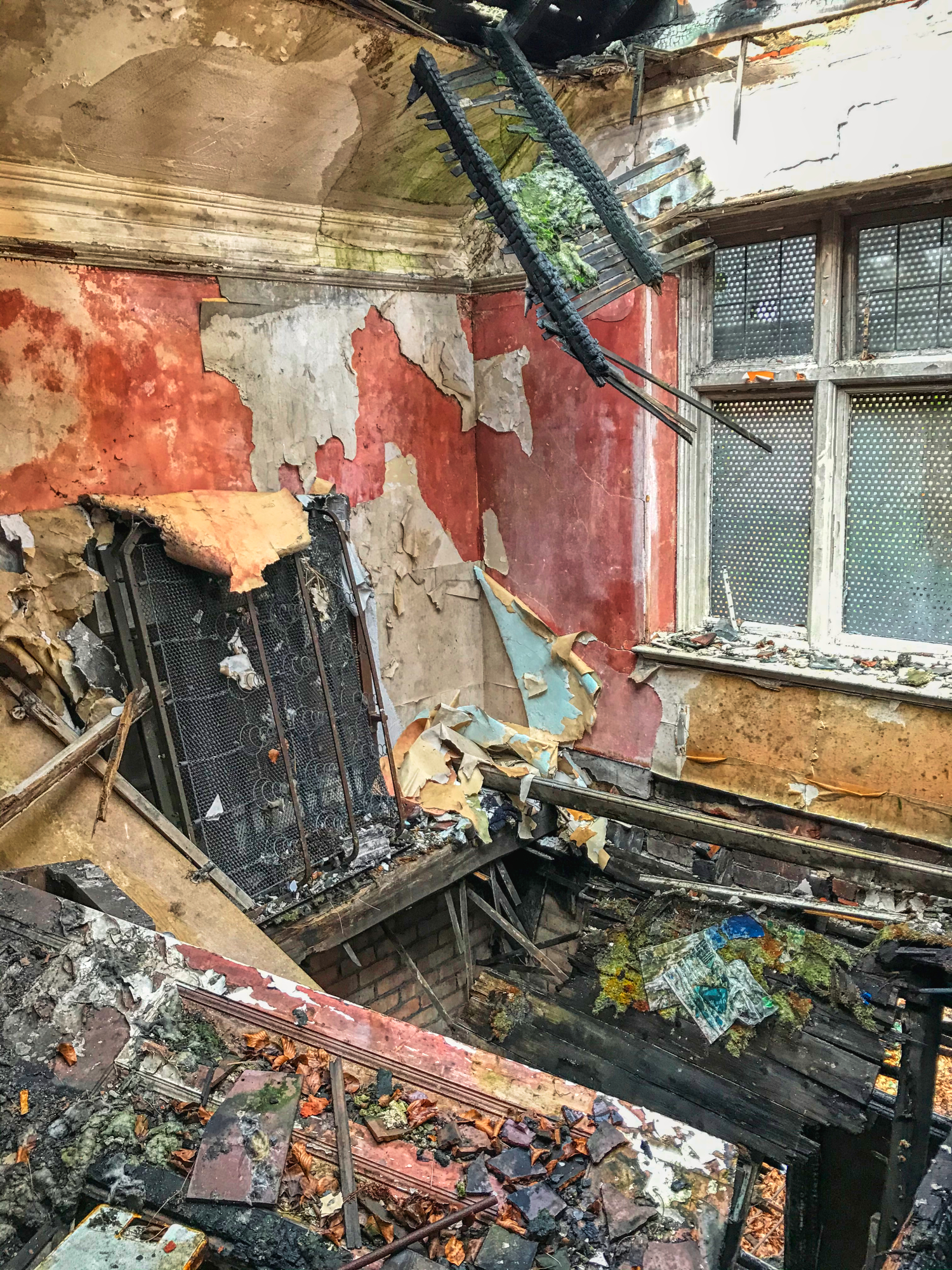 There was a bed in there once. 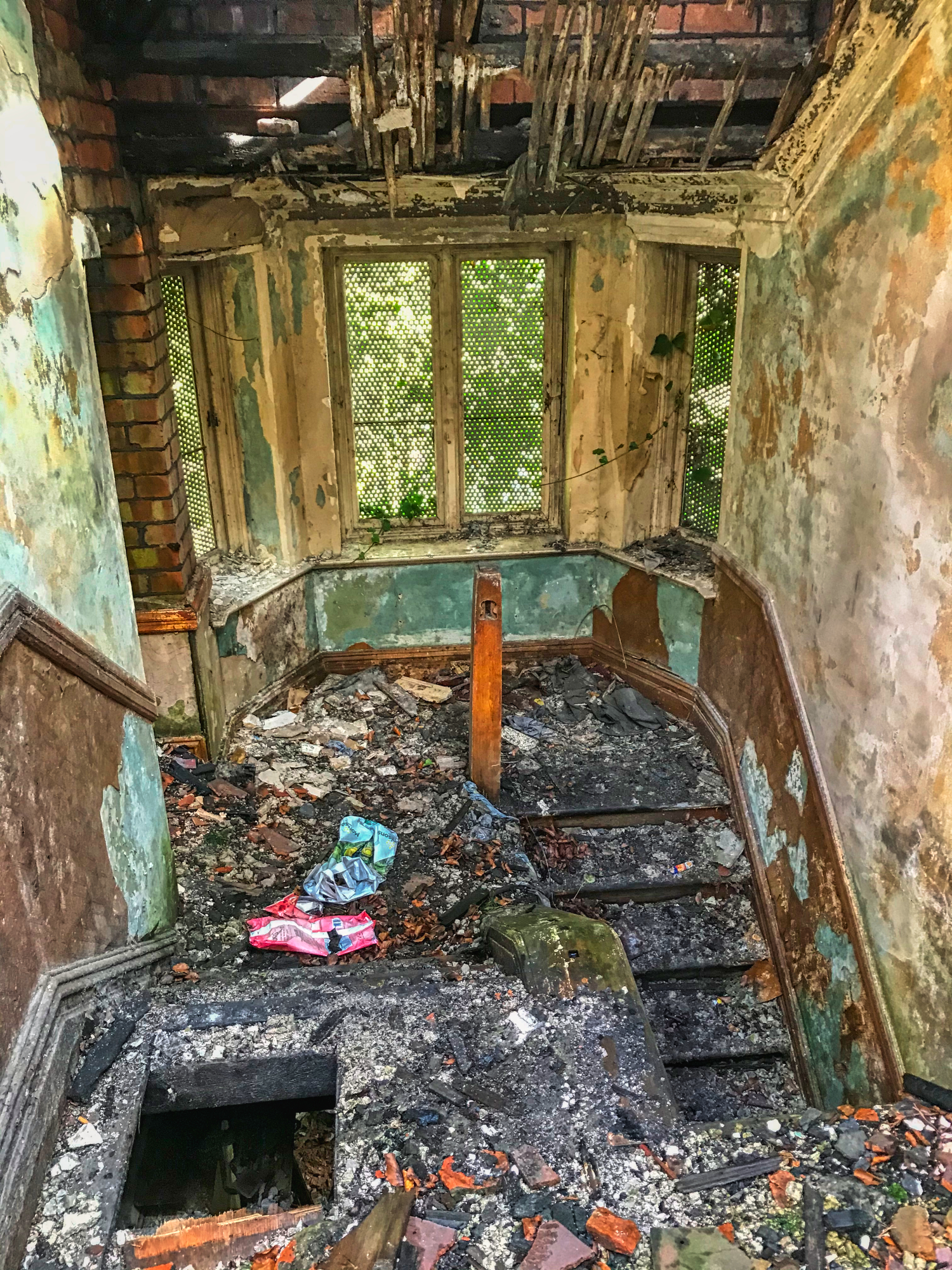 This is the view from the top of the stairs descending. You can’t expect to hold on to the banister so holding your arms out horizontally for balance sometimes works. 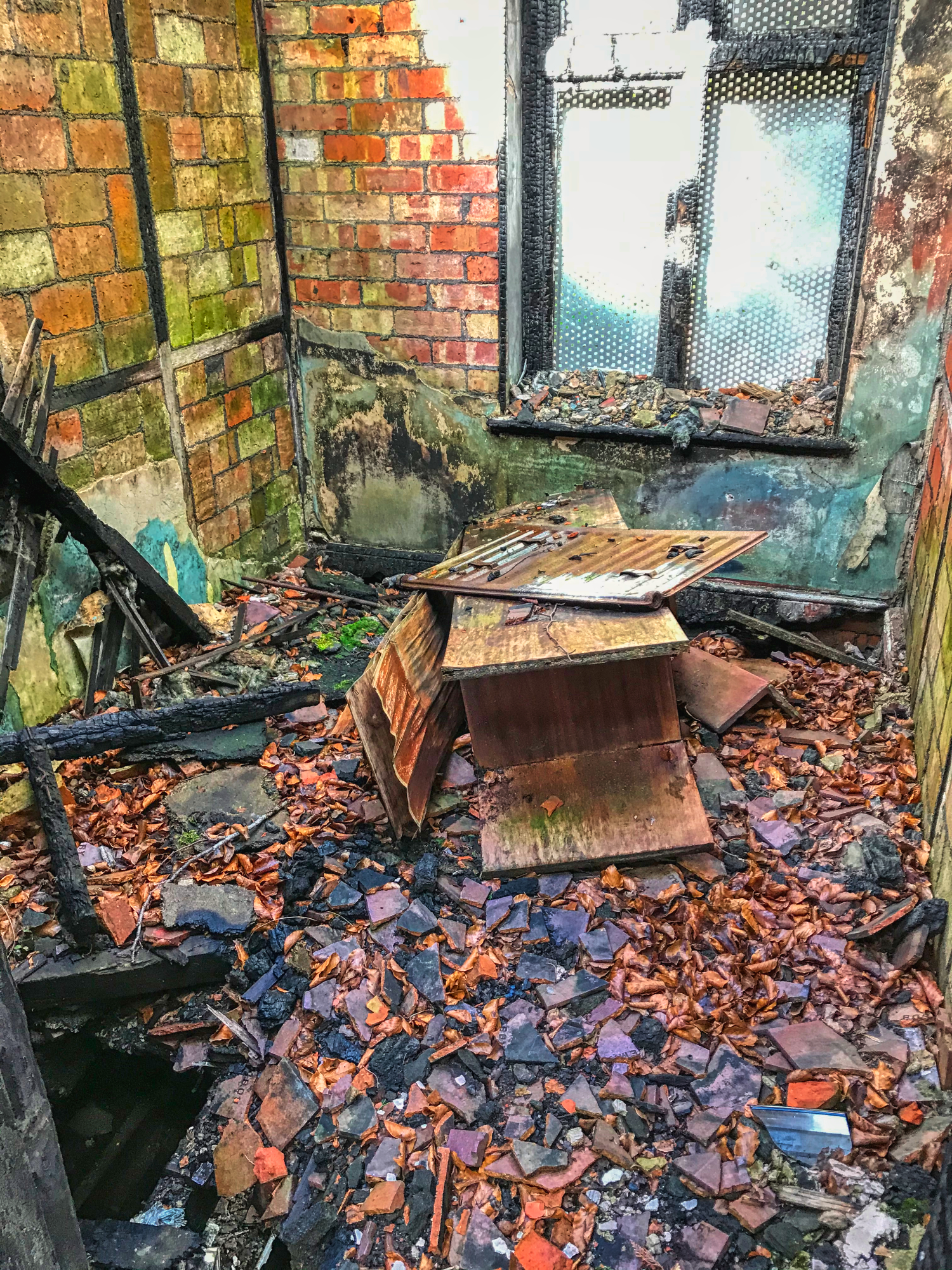 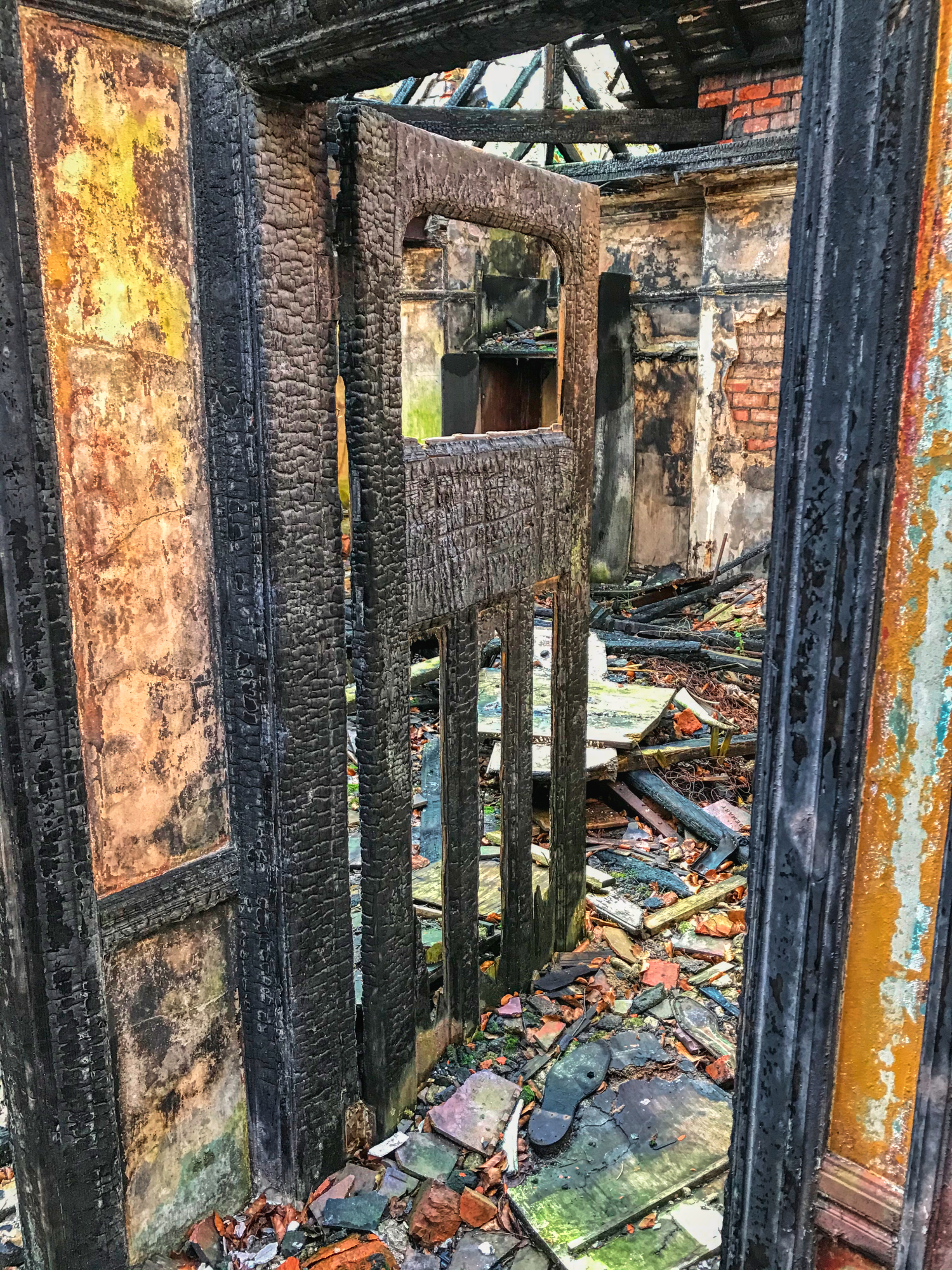 There has been a serious fire on the upper floor as well as the lower. 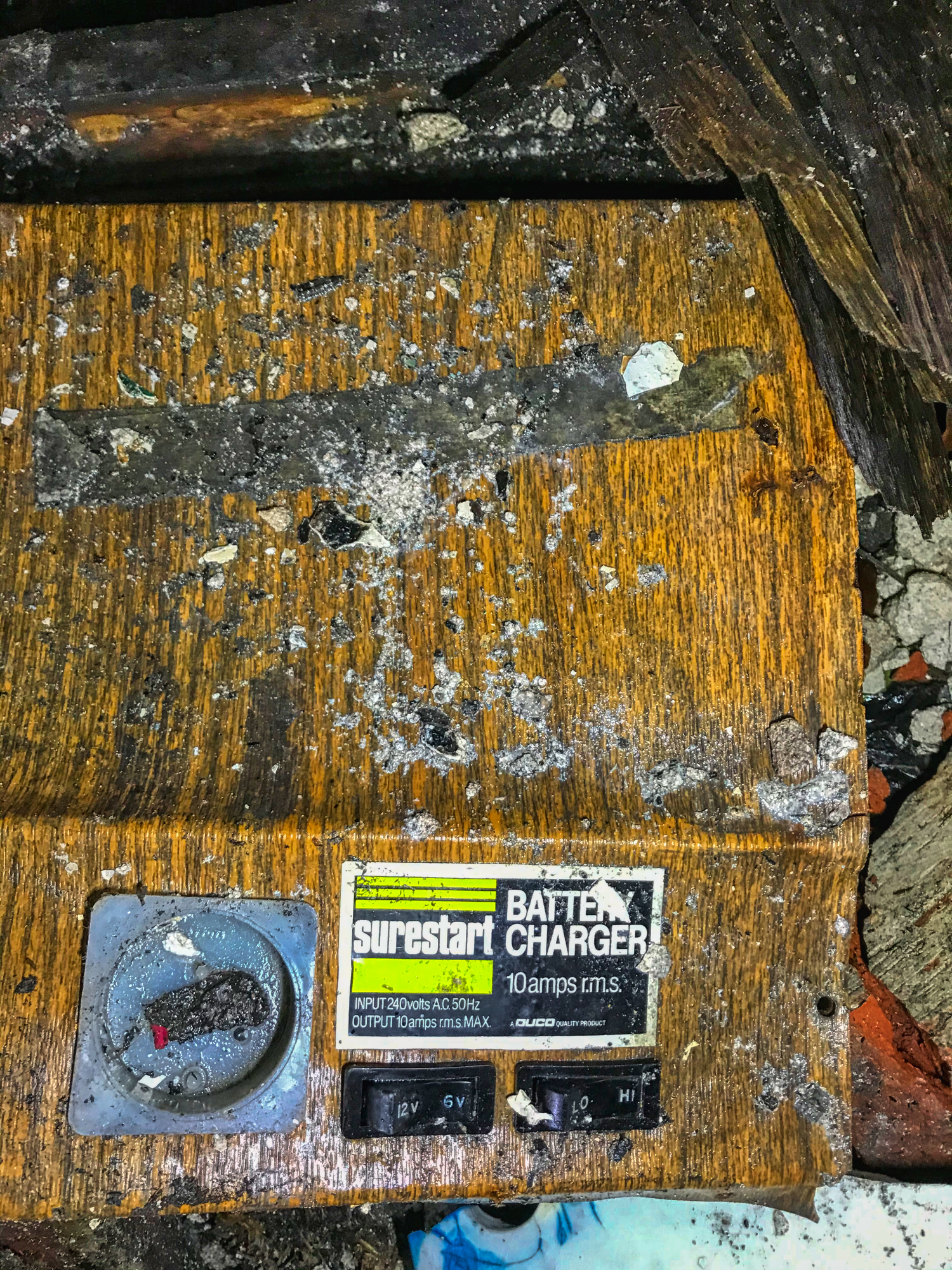 There was little of the battery charger left. It looked quite chunky. 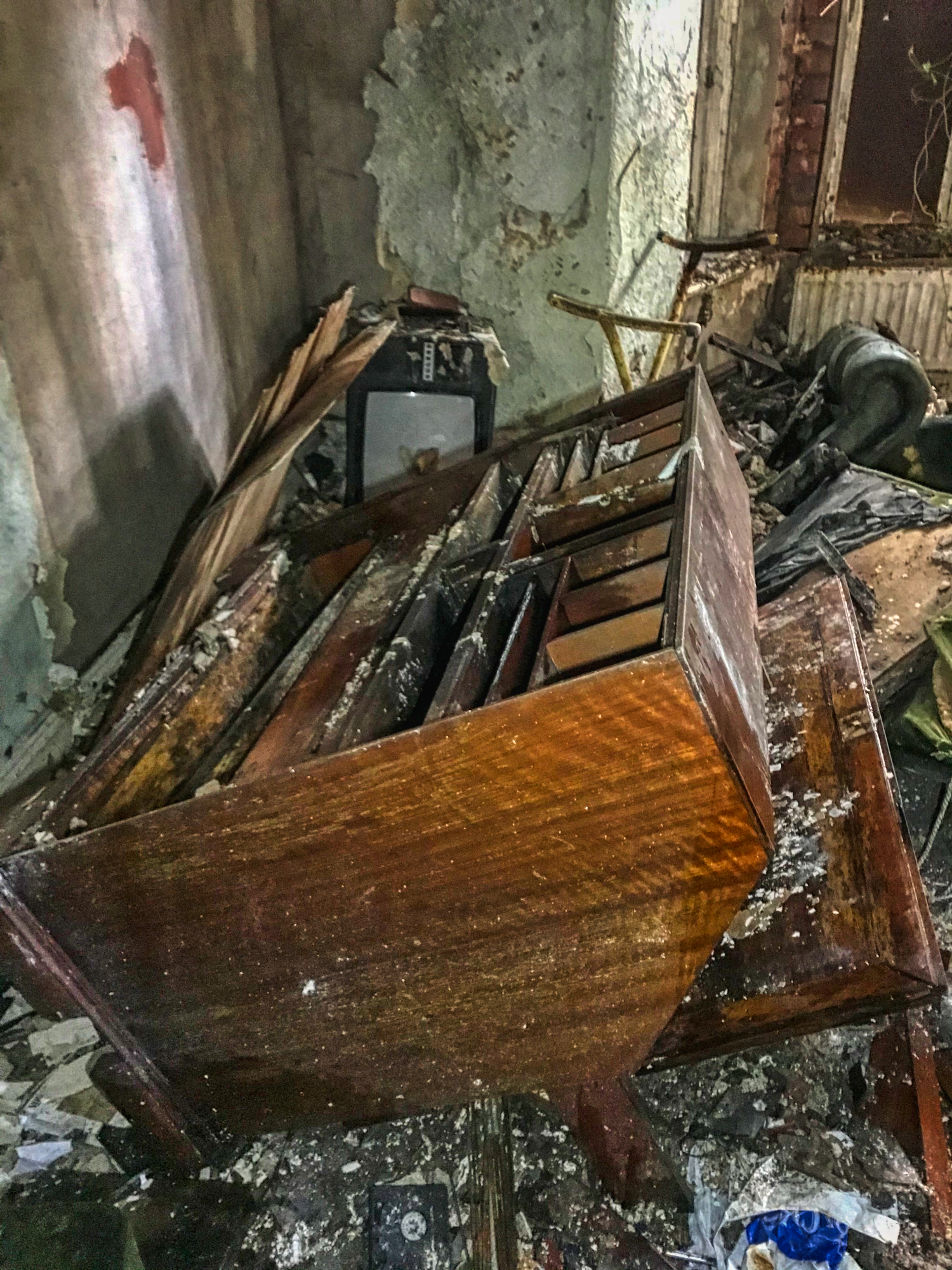 As hard as we looked we found no extra banknotes. Those spotty teenagers took it all years ago and through stupidity and greed lost it.

As we vaulted the gate.., me more gingerly as I value my balls the nosey middle-aged woman was staring at us out of her front room windows, phone glued to her ear.

I could imagine the conversation with the cops who probably don't give a shit and were stifling bored yawns. 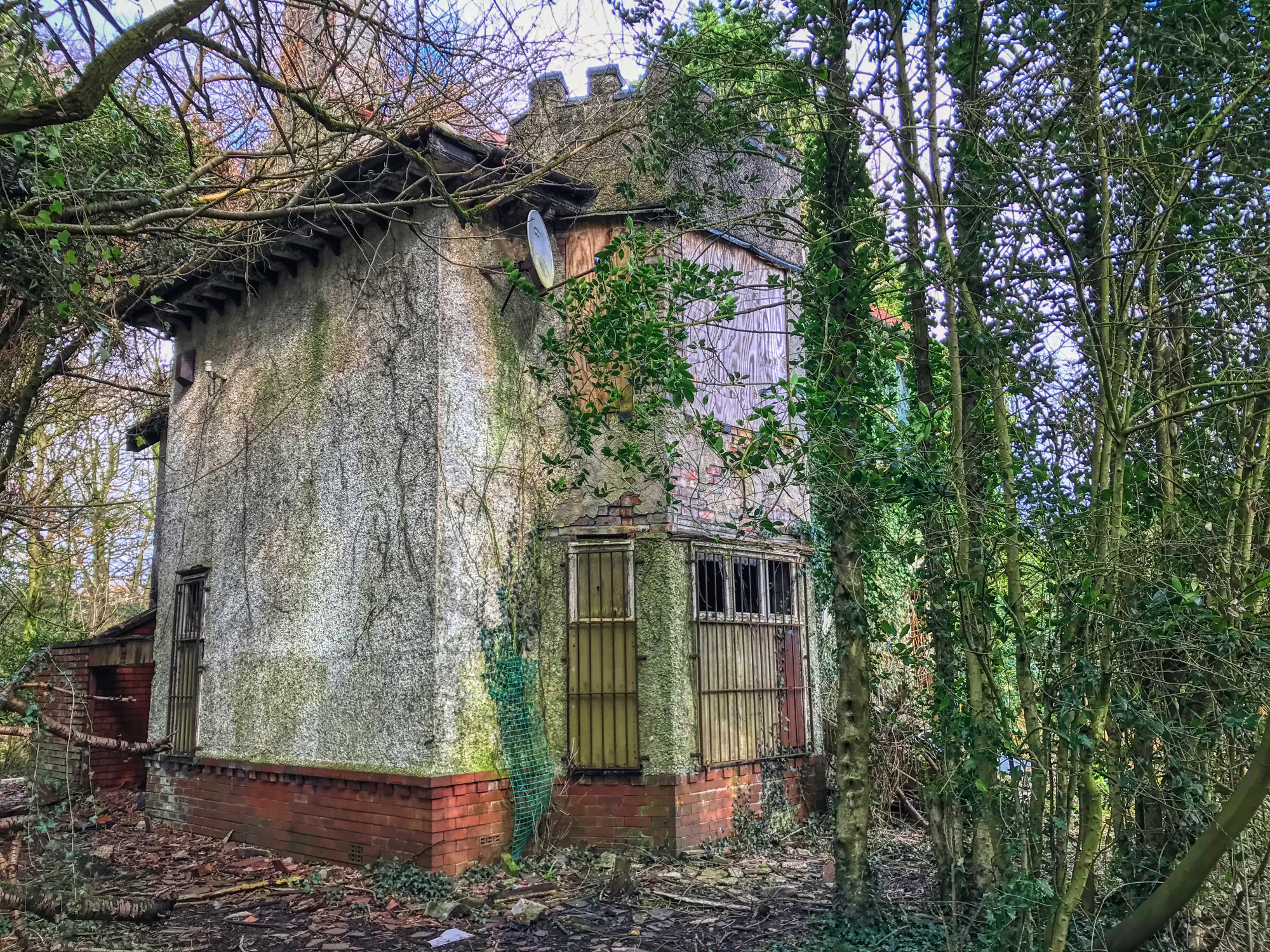 ...'There are two hooligans vandalising that old house again, you need to come and arrest them quick’...

You can’t always be the sneaky ninja. We left in a hurry.

Wow, that place was trashed!

Neat dive though, wild that with all the obvious fire damage it's still got so much crap all over the floor that doesn't seem to show much for fire damage.

I generally pick through it to see what I can find. With the upper roof being gone it was wet and paper items don't take kindly to that treatment. I'm sure there's all kinds of goodies under all those tiles.

I'll bet! Though, for me, the likelihood of there being bugs under those tiles is it's own reward. I love me some bugs, yo.

We don't have big ones here, they are quite dull compared to warmer countries (and harmless).

That story was like a parable for life! We are all looking for that greasy tin full of banknotes!

I quite liked the lighting, not too dark at all!

Not a tin to be found, even an empty one. They could have left a fiver behind for me!

It might have been hidden in the thin air under that carpet! ;OD

Any idea or good rumors when she last lived there? That bath and stuff aren't too old.

I did look but could not find a thing. I would estimate around 10 years of decay, just a little too long. You get a knack of figuring it out after doing 150+ explores.

They could have kept that cash, but teens are quite dense!

What a splendid old building, nice sketchy floors to contend with

I have had sketchier, a strip club last weekend had massive holes with a nice 8 foot drop to fall through. Great ain't it!

Bloody super, I see reference to you on fb a lot yesterday “an idiot explorers” tagging you !

What a strange yet amazing hobby you have. Love these posts.

It's getting a little mainstream over here for my liking, not so strange anymore. I am meeting more explorers on the job as time goes by.. all younger than me... sad to say.

I was thinking you had covered this one already, but then I realized that was the witches house not the widows house or something like that. My mistake. Too bad they burned it all. There might have been something to look at there with everything that was left.

The Witches house has since been demolished. I too.. keep visiting potential places only to find a load of bricks instead.. Its annoying.. and worse than a fail!

I saw @ashtv got hold of an old TV, but he might not want the one you found.

Looks like someone put new tiles over the old ones in the bathroom, but they all fell off. I've lived in a few old houses and it can be interesting to see the history. In some we stripped off several layers of wallpaper. Just have to make sure the floors are safe to walk on! Take care mate.

The floors were dodgy but you do get used to it. Yeah.., I love my shitholes, if there's nothing else.., they will do!

Yeah that TV is a bit far gone even for me