Tales of the Urban Explorer: The Slaughterhouse

“What’s that old shitheap of a place”, I exclaimed to @anidiotexplores excitedly pointing in the direction of the passenger seat and almost displacing his nose.

Having left Pigeonshit Manor we were on our way to a remote farm when that intoxicating visage of broken windows and decaying masonry entered my vision. 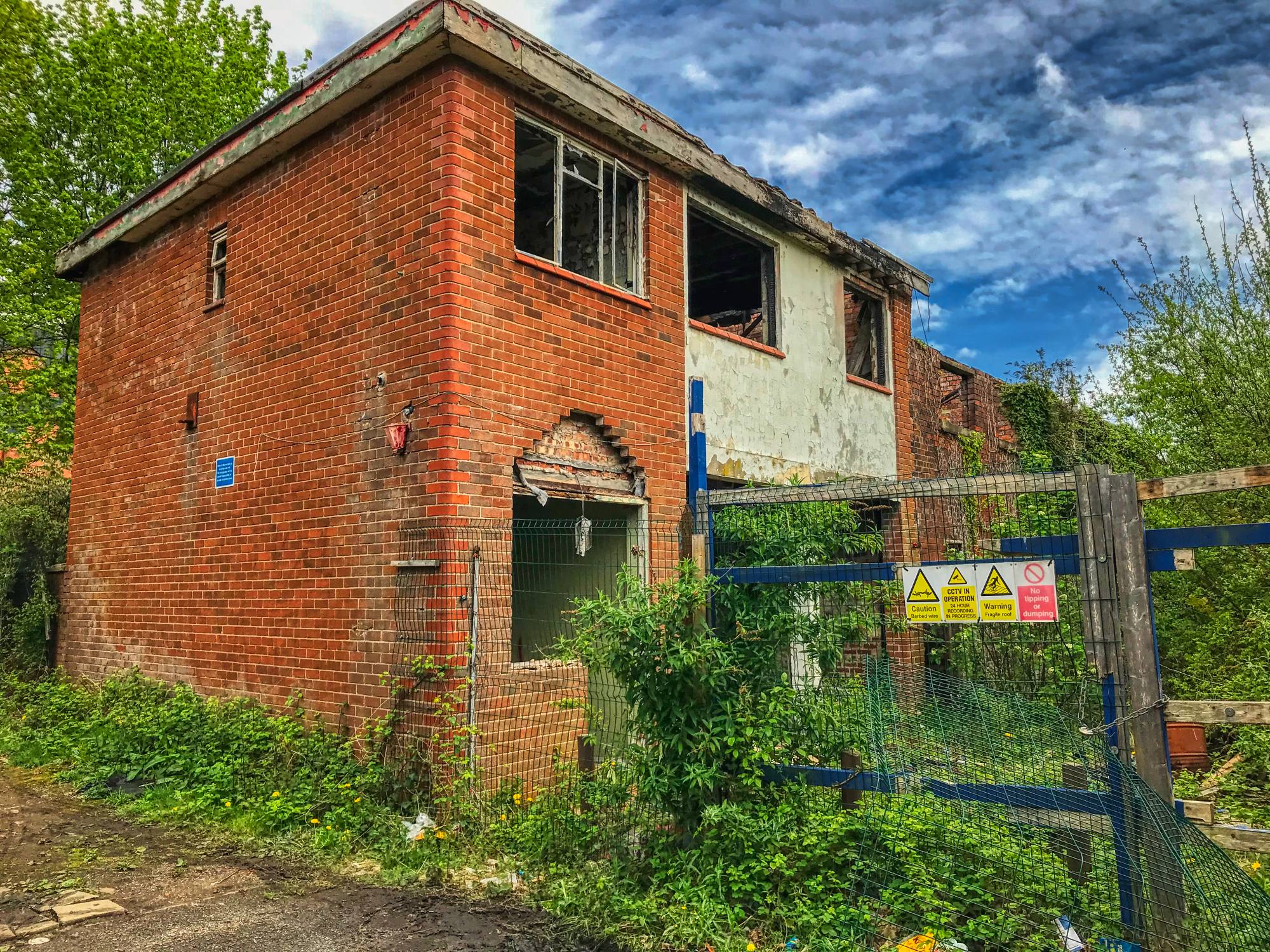 I was not expecting to see this so close to a town centre or was I? It depends which town you are talking about.

This in itself presents parking problems but we were lucky and found this particular town lets their shoppers park for free on certain days..., that day being one of them.

…' don't get me started on paying for parking in town centers, it’s a pet peeve of mine’…

Patiently waiting for some dawdling annoying cops to drive away we gazed upon the spectacle of what we would name.., ‘The Slaughterhouse’.

No, it’s not the set for the SAW movies though I wish what you were reading did contain that level of drama. 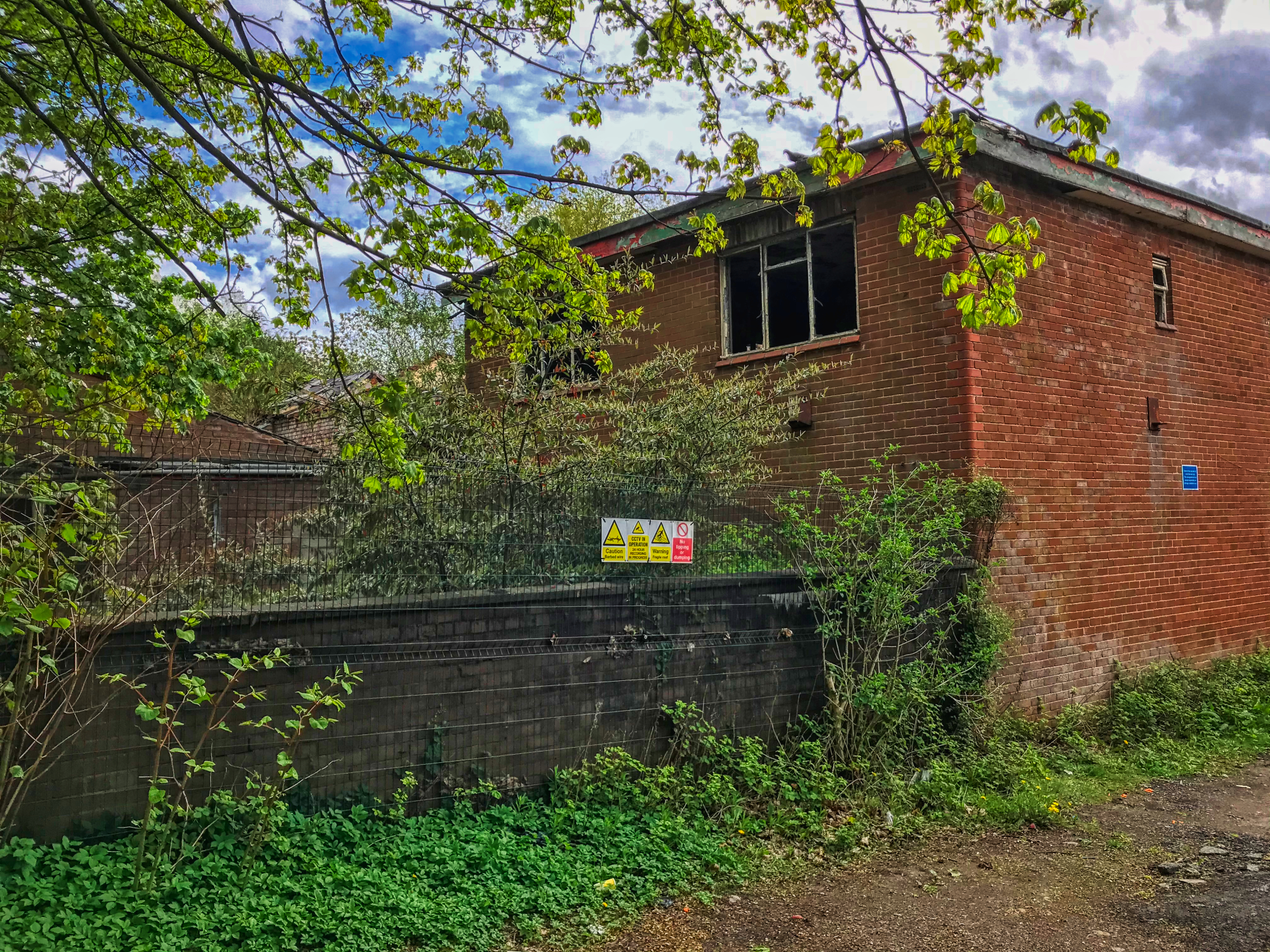 We call them abattoirs in the UK, places to kill animals before consumption. It’s not a particularly nice subject to discuss and I will leave the ethics right here.

...'this is an Urbex post, so no discussions about meat, vegetables or ugh... Quorn'...

At this point, it was simply an old derp and we had no clue what it was used for. A little post research by @anidiotexplores revealed this fact. 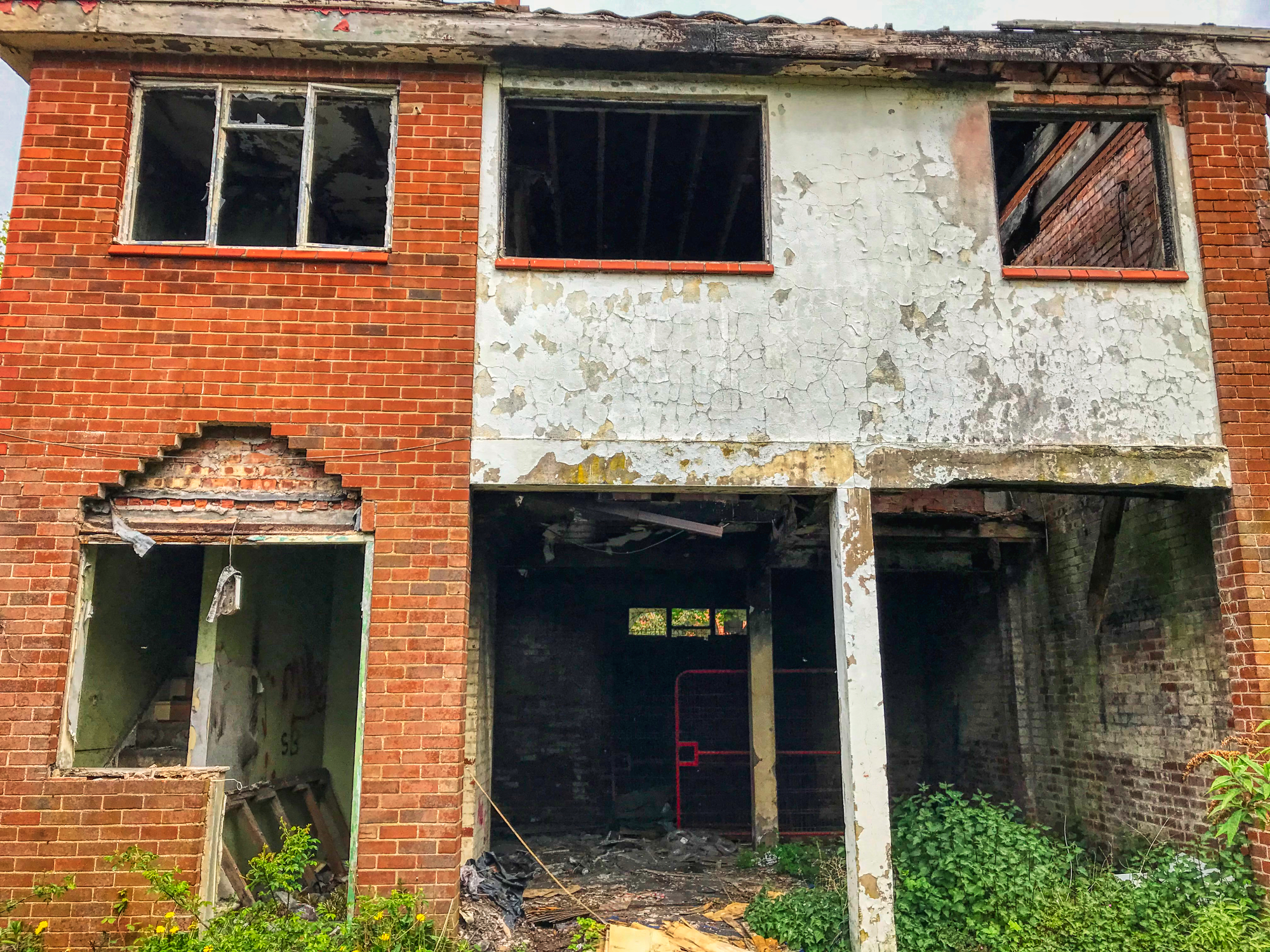 It was never going to be an issue getting in the grounds or the property, the owner has long given up trying to secure this one. 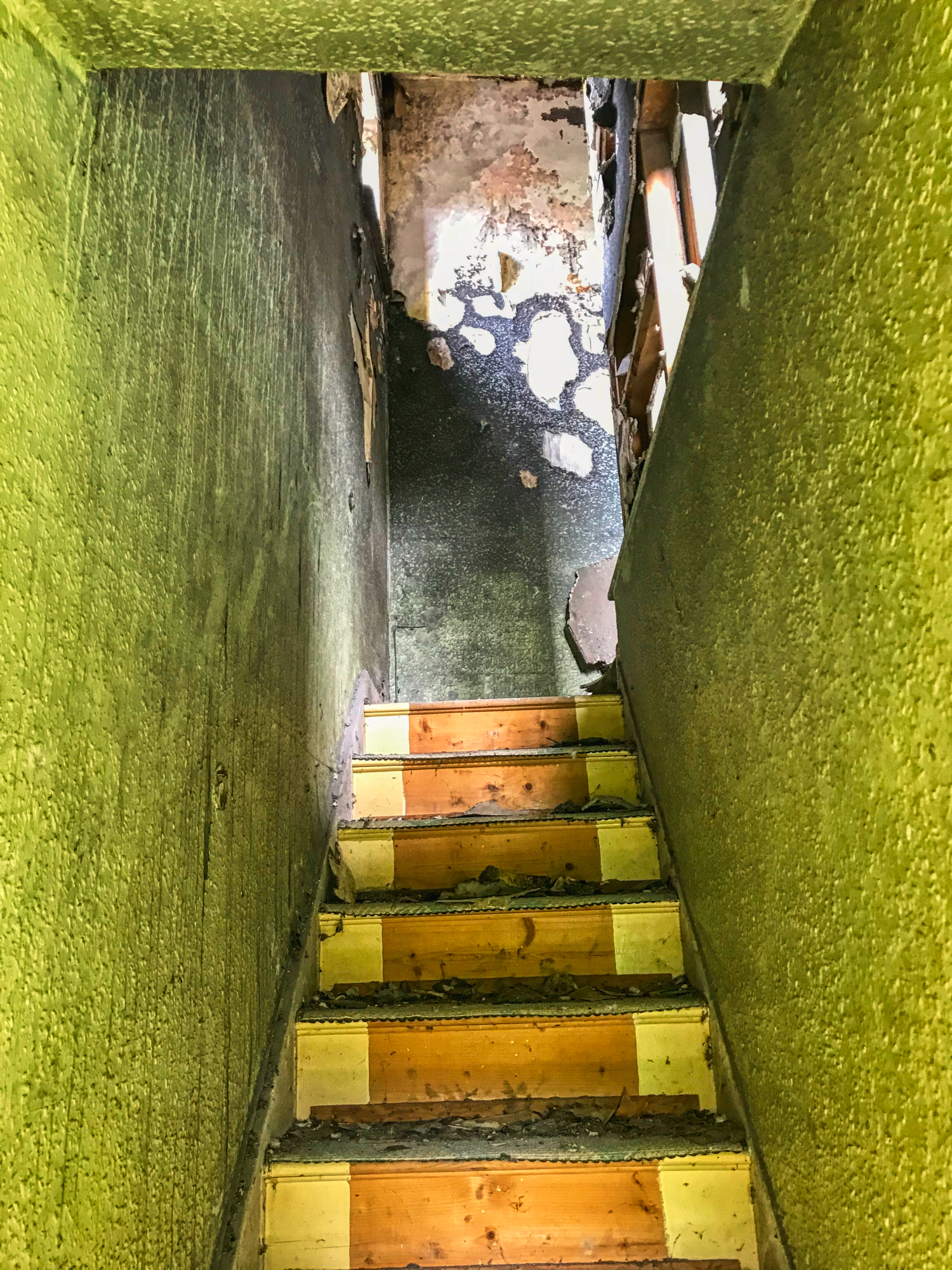 This fucked up house miraculously contained stairs that you could walk up that were even quite stable. 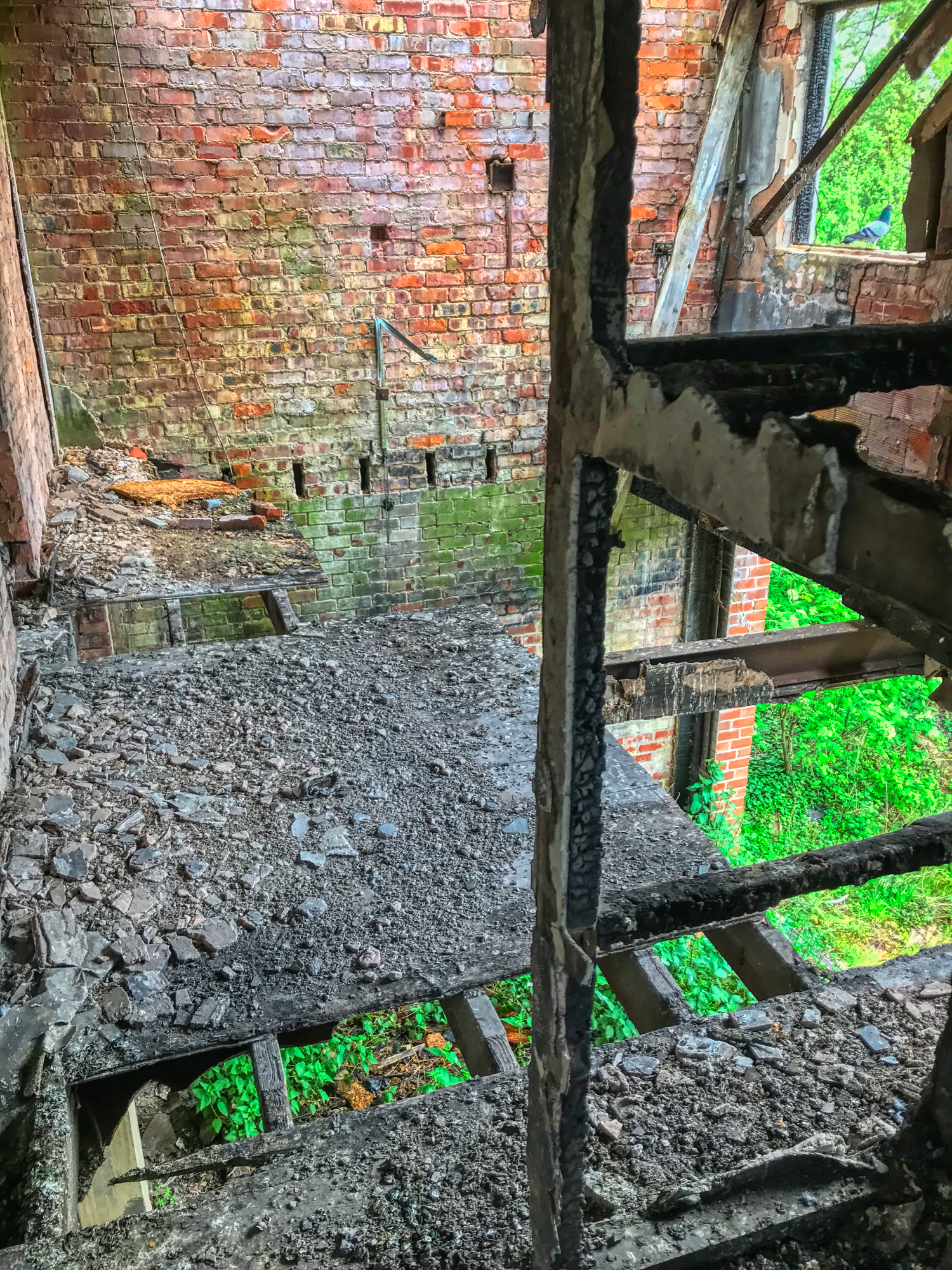 That was about as far as we dared get, the floors looking a little too shaky for my liking. 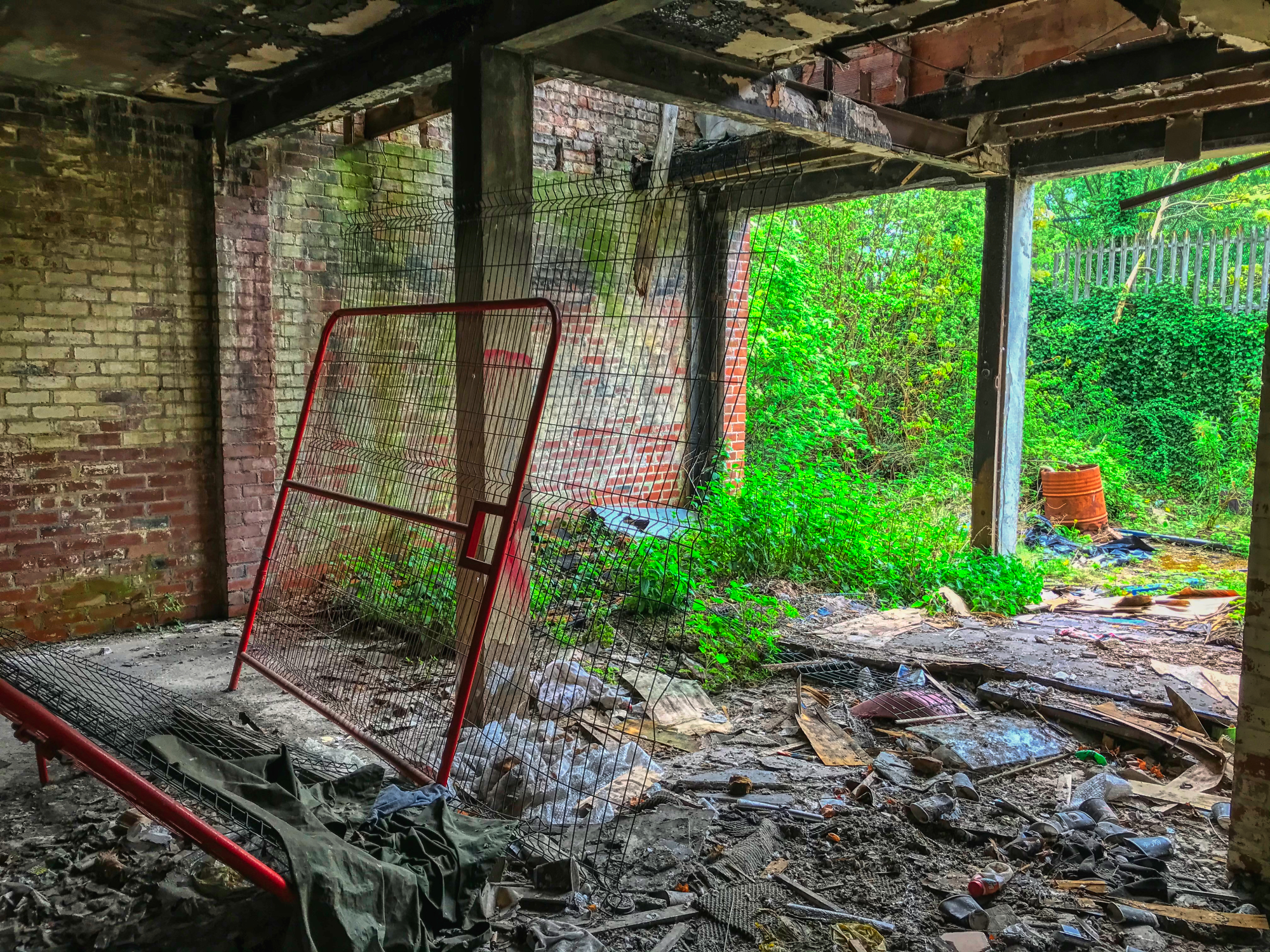 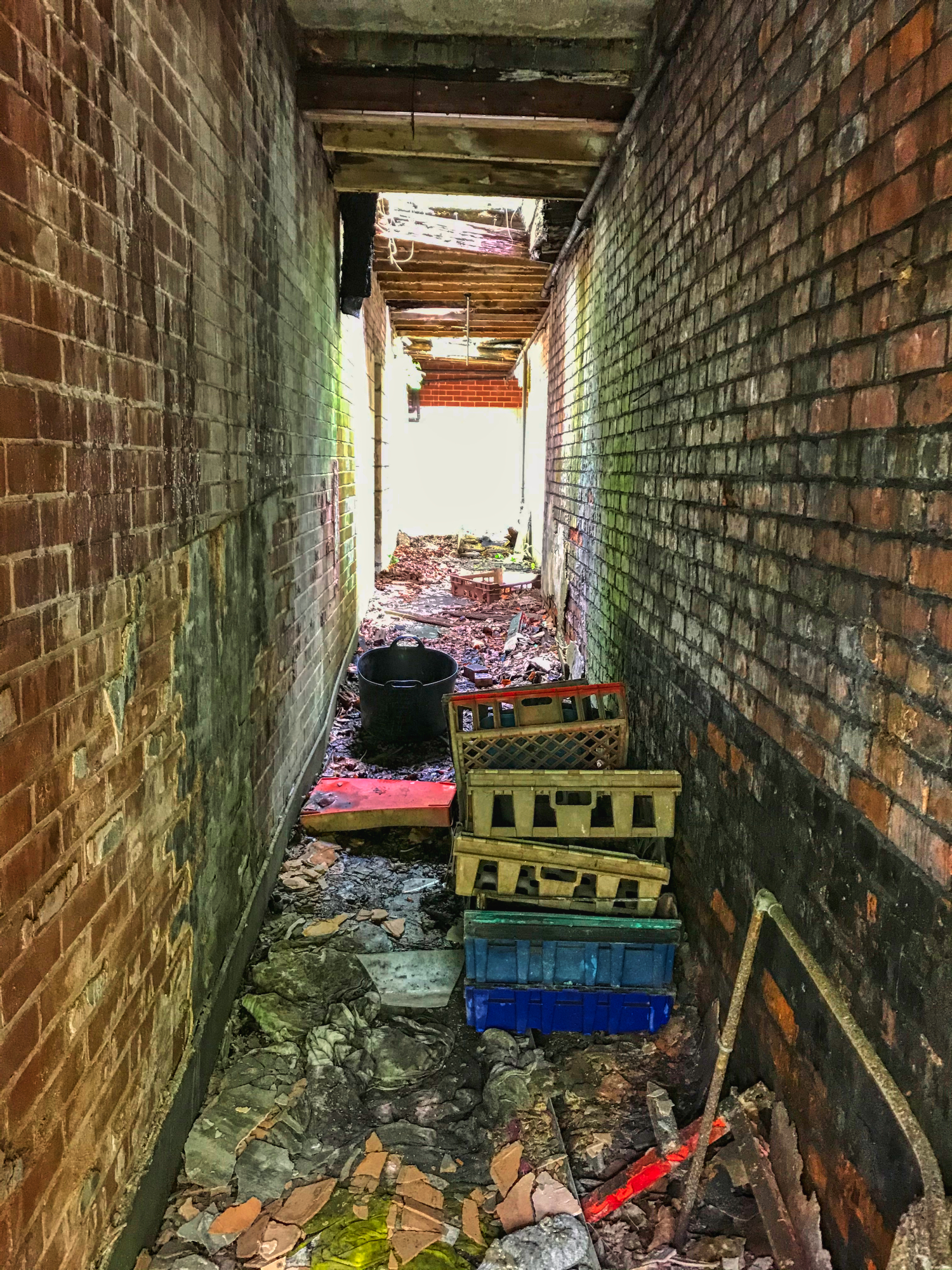 There was more to this Slaughterhouse complex than the house. I wonder if the ‘butcher’ family lived here and did their bloody work next door? 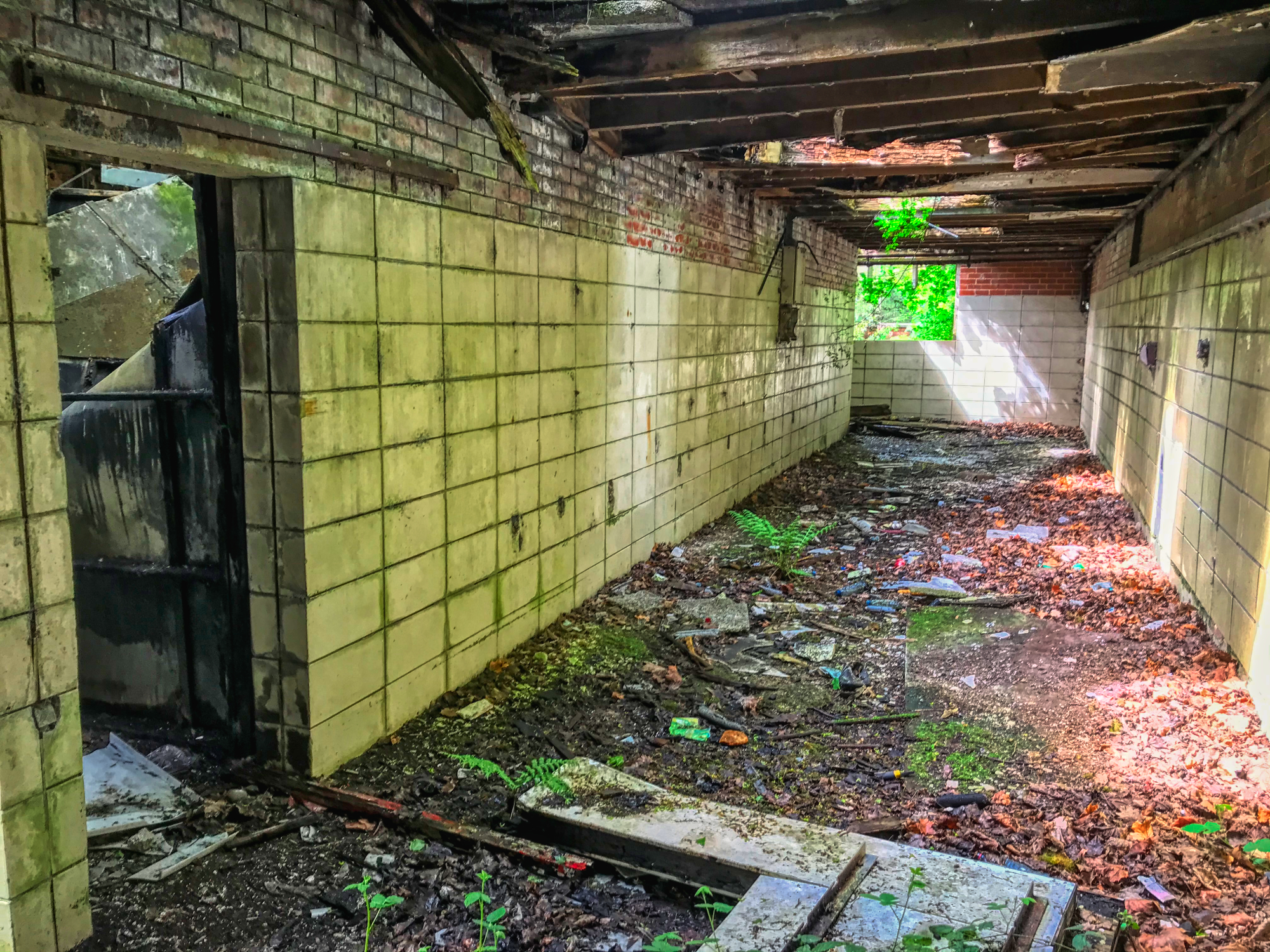 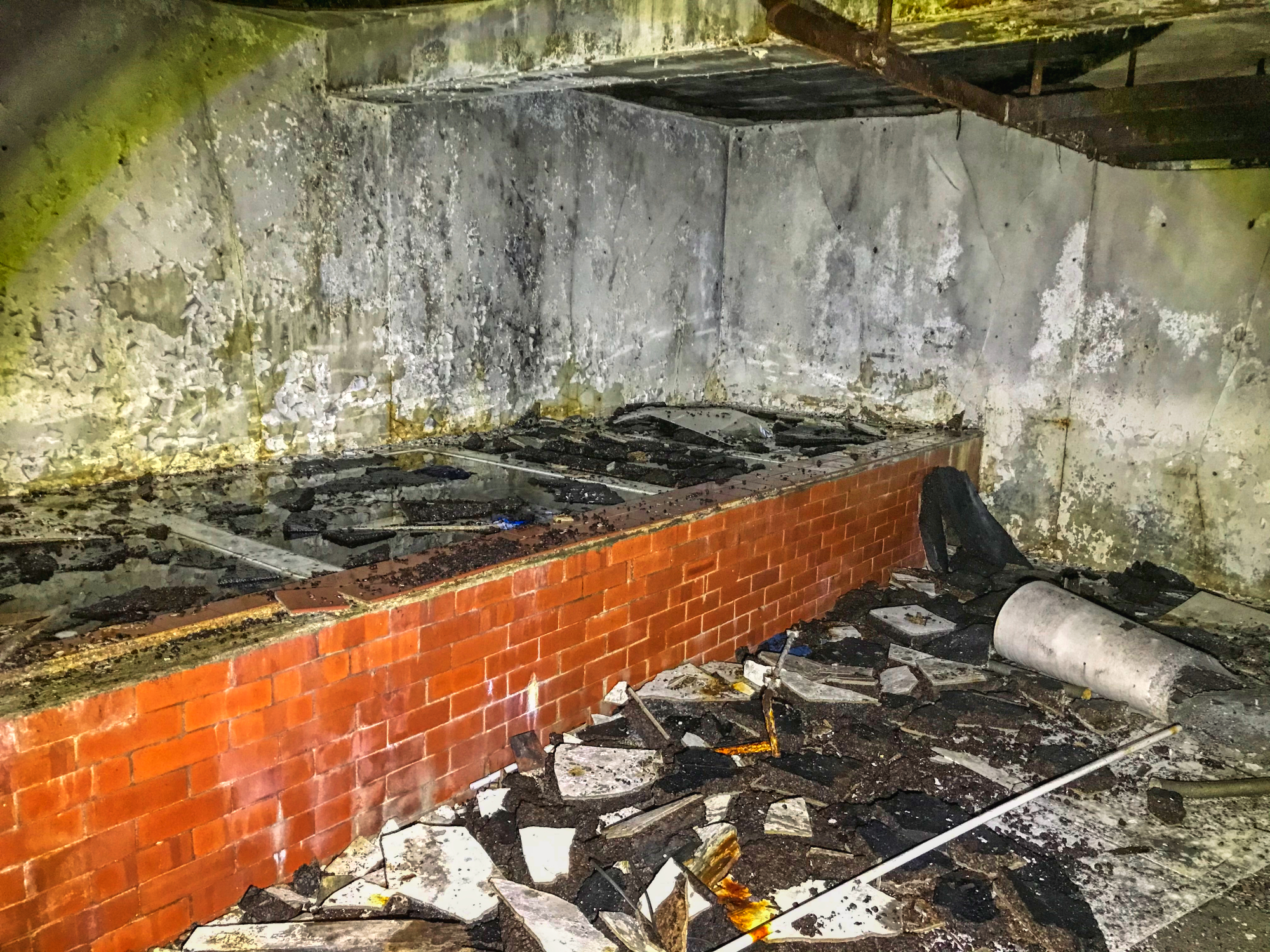 Those tiles would prove useful, nice and easy to wash off the oodles of blood. 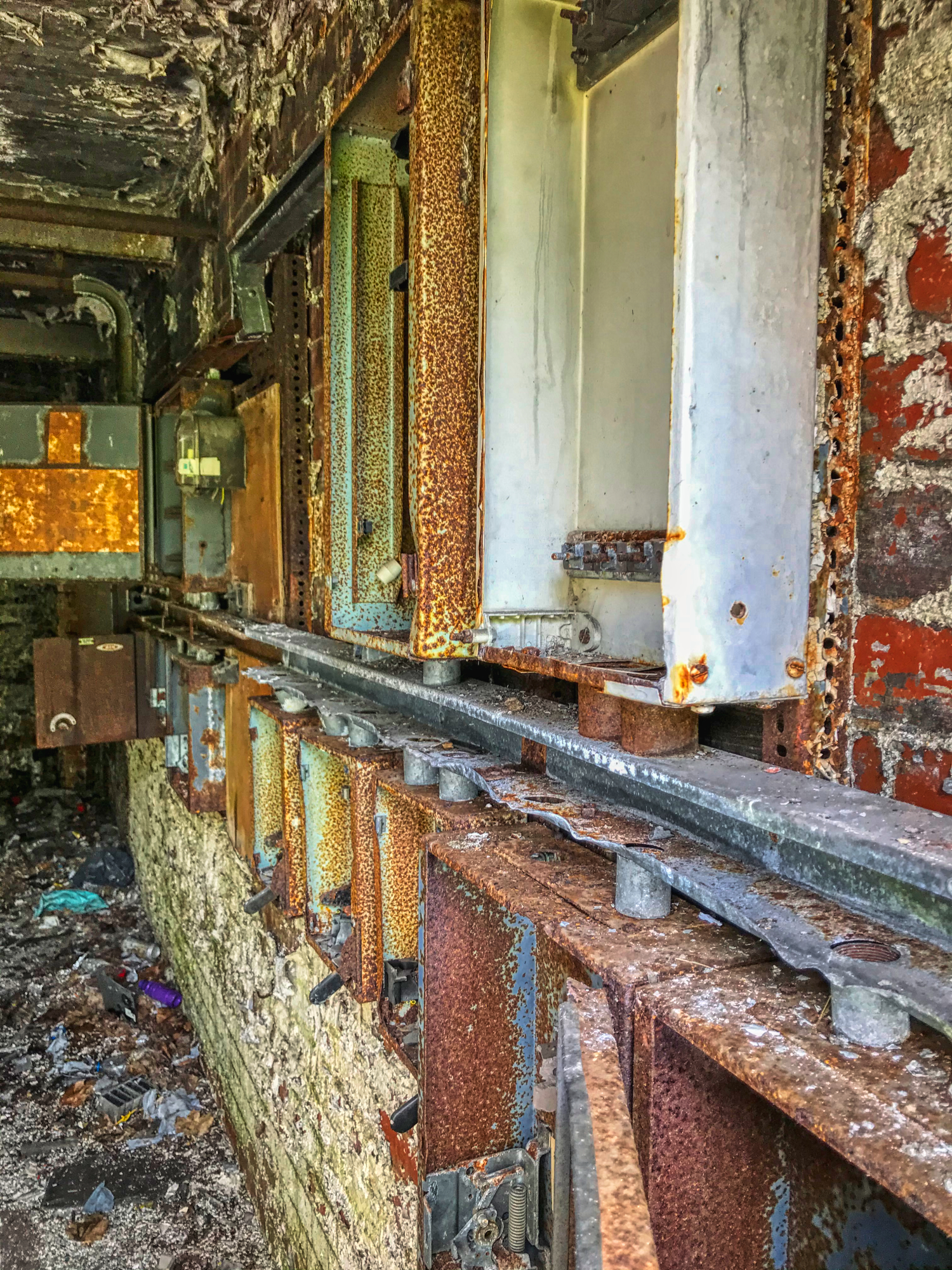 I could see this was one of those places where I would struggle to find little clues to the existence of mankind unless you count old power sockets. 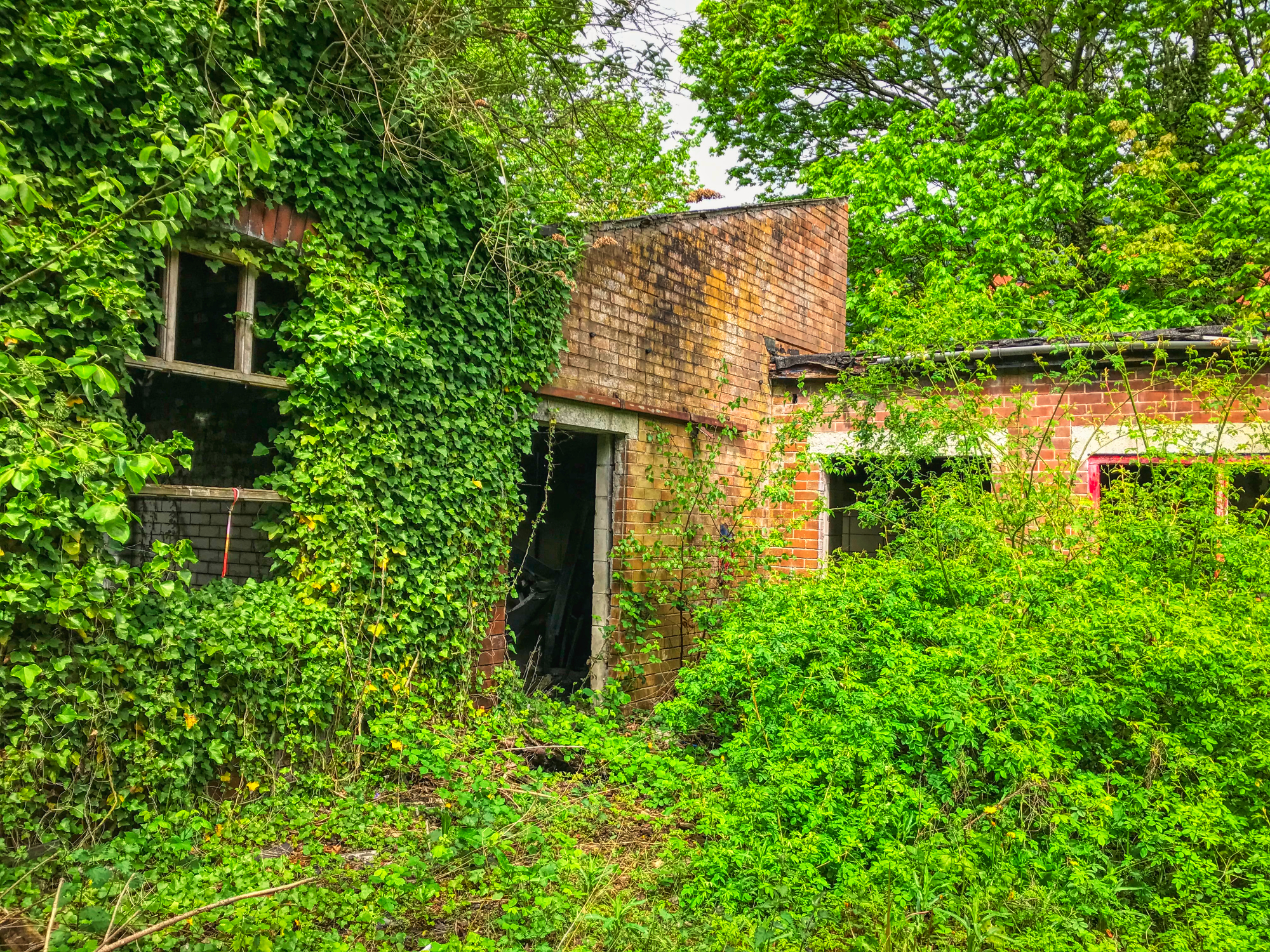 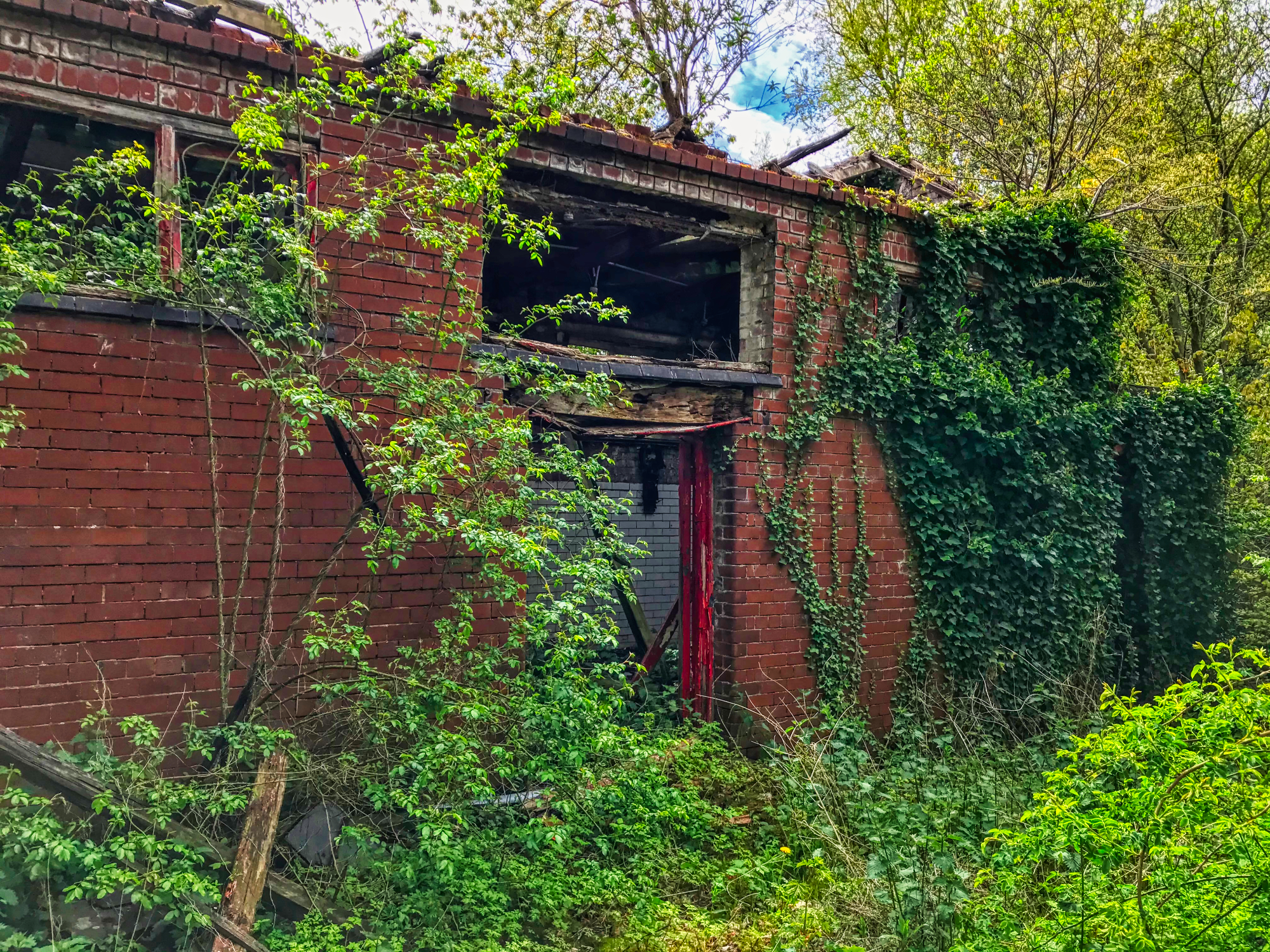 There were a series of small little houses each containing loose bricks, rubble, dirt, and crap, and don't forget the muck and shit. Are you starting to get the picture? 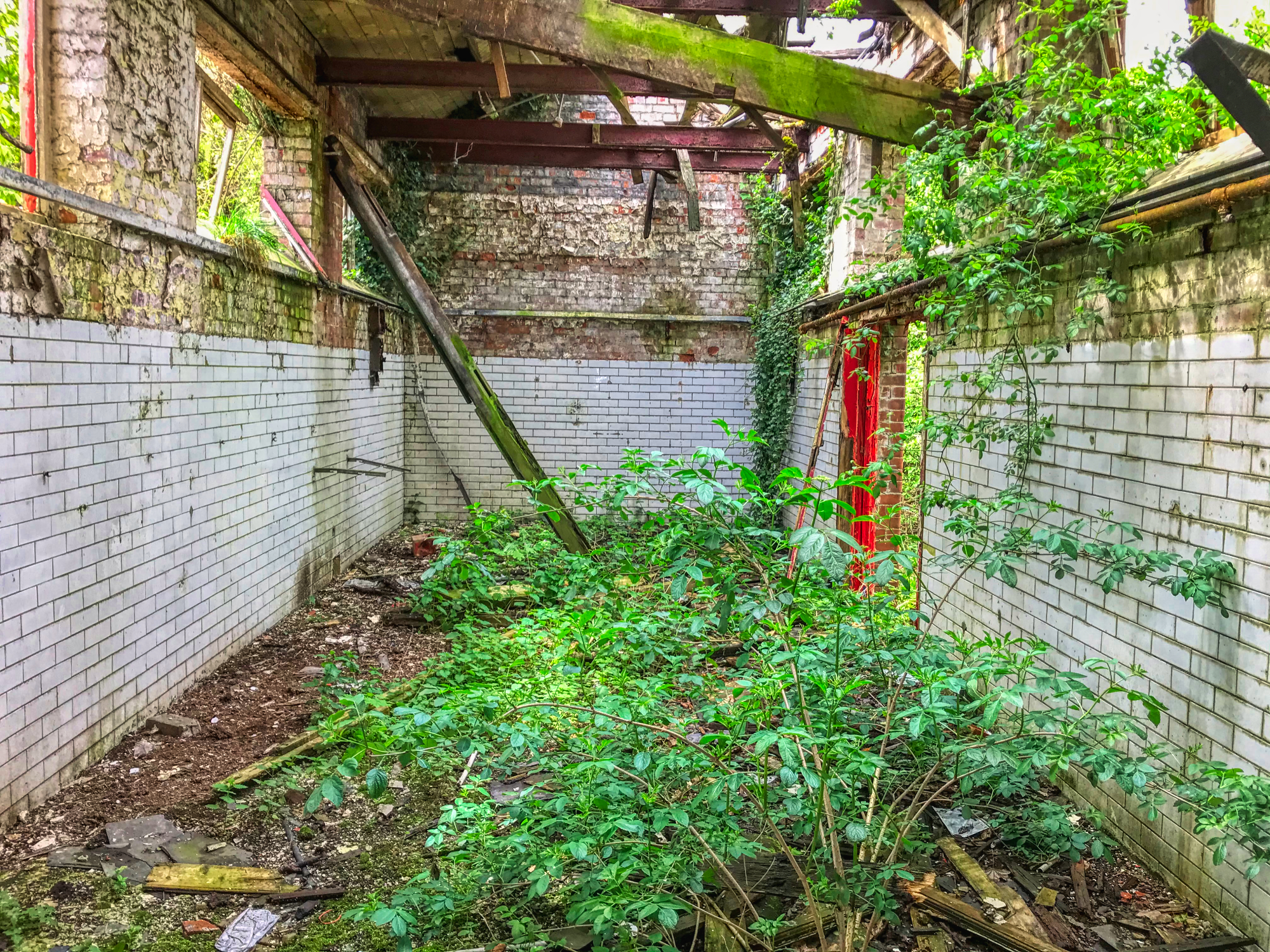 It does make for some quite photogenic scenes though. 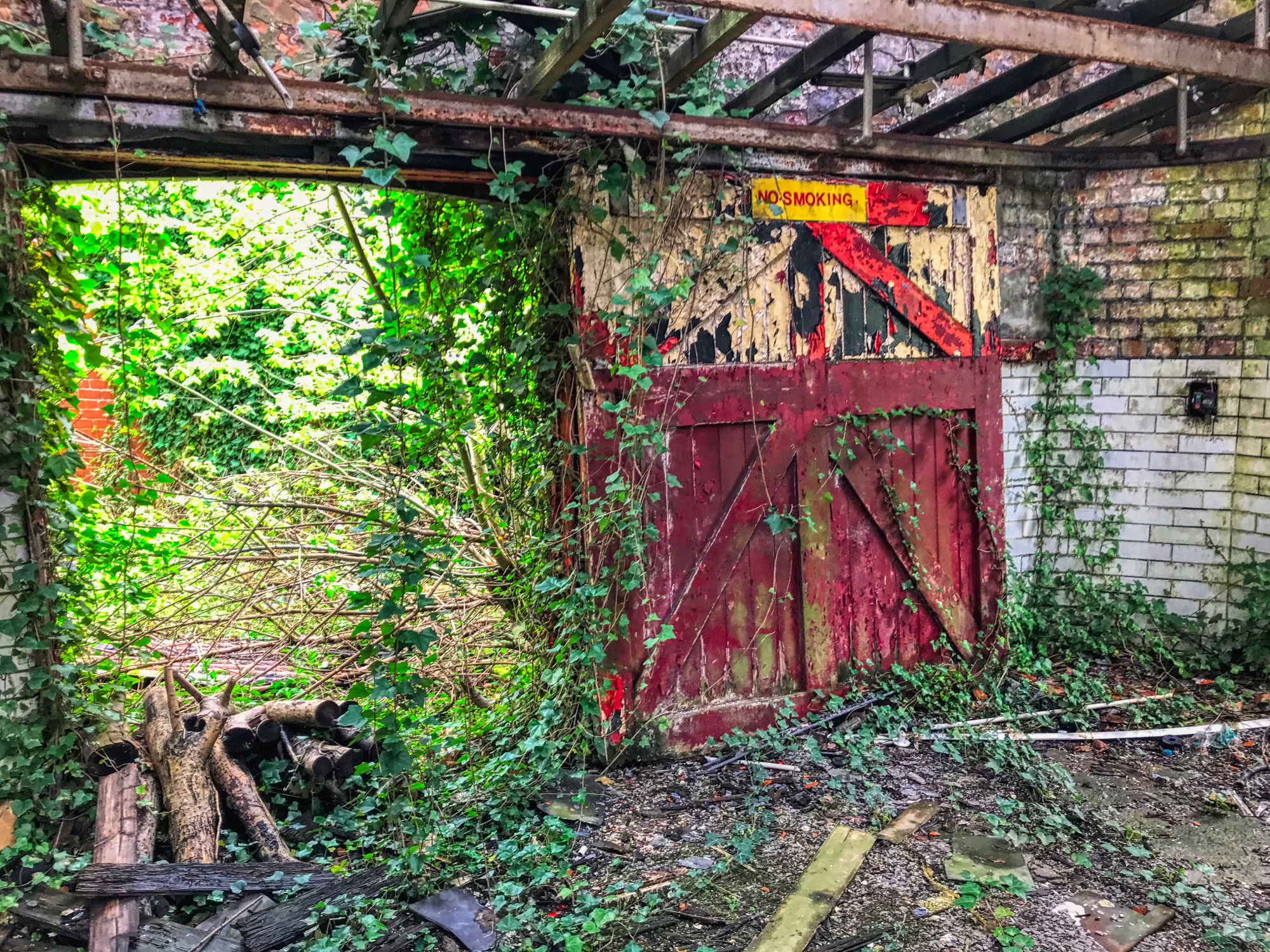 I was almost relieved to find a sign with English language text attached to it. Tobacco-laced hands would surely attach some extra flavour to the beasts? 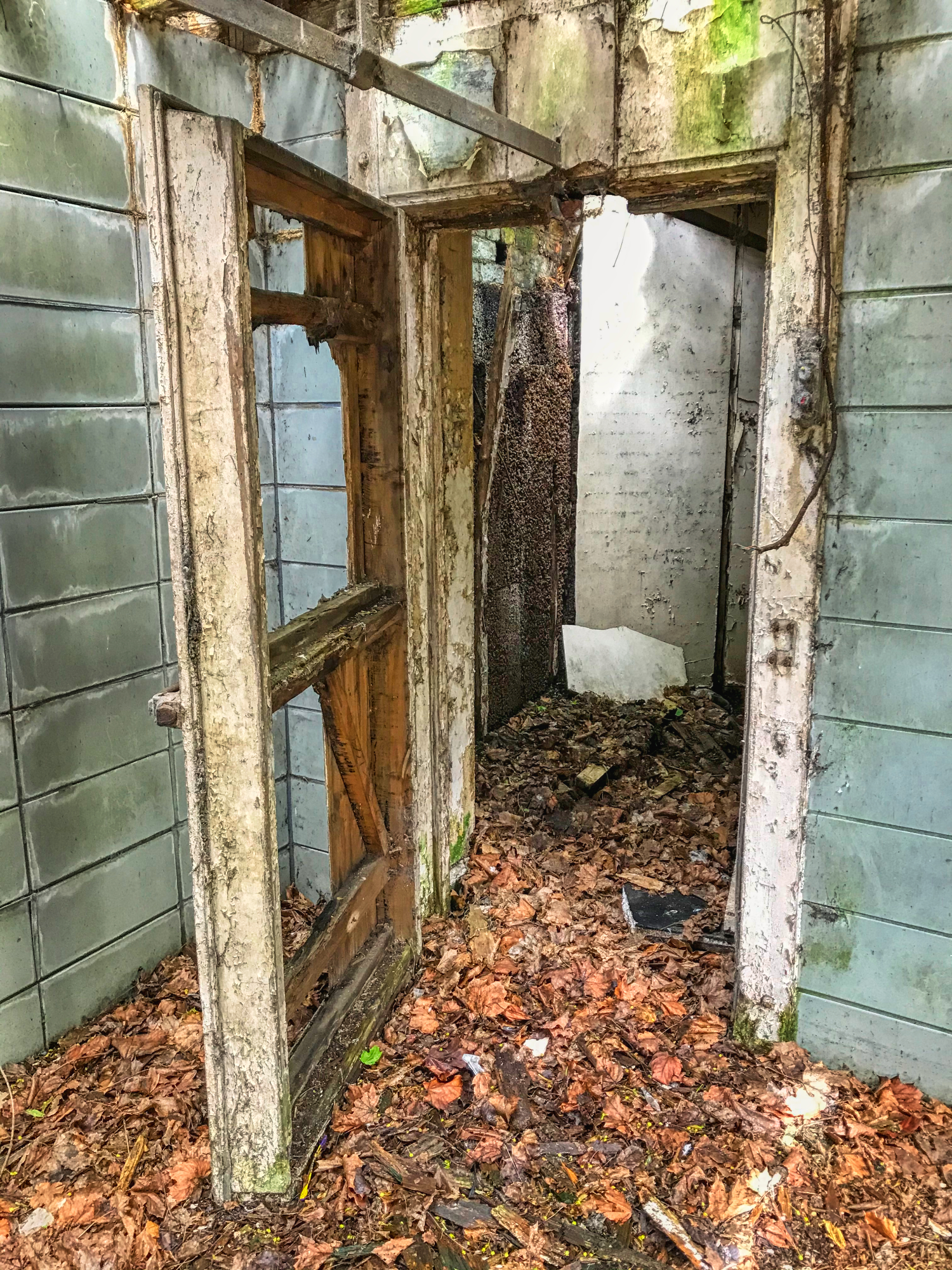 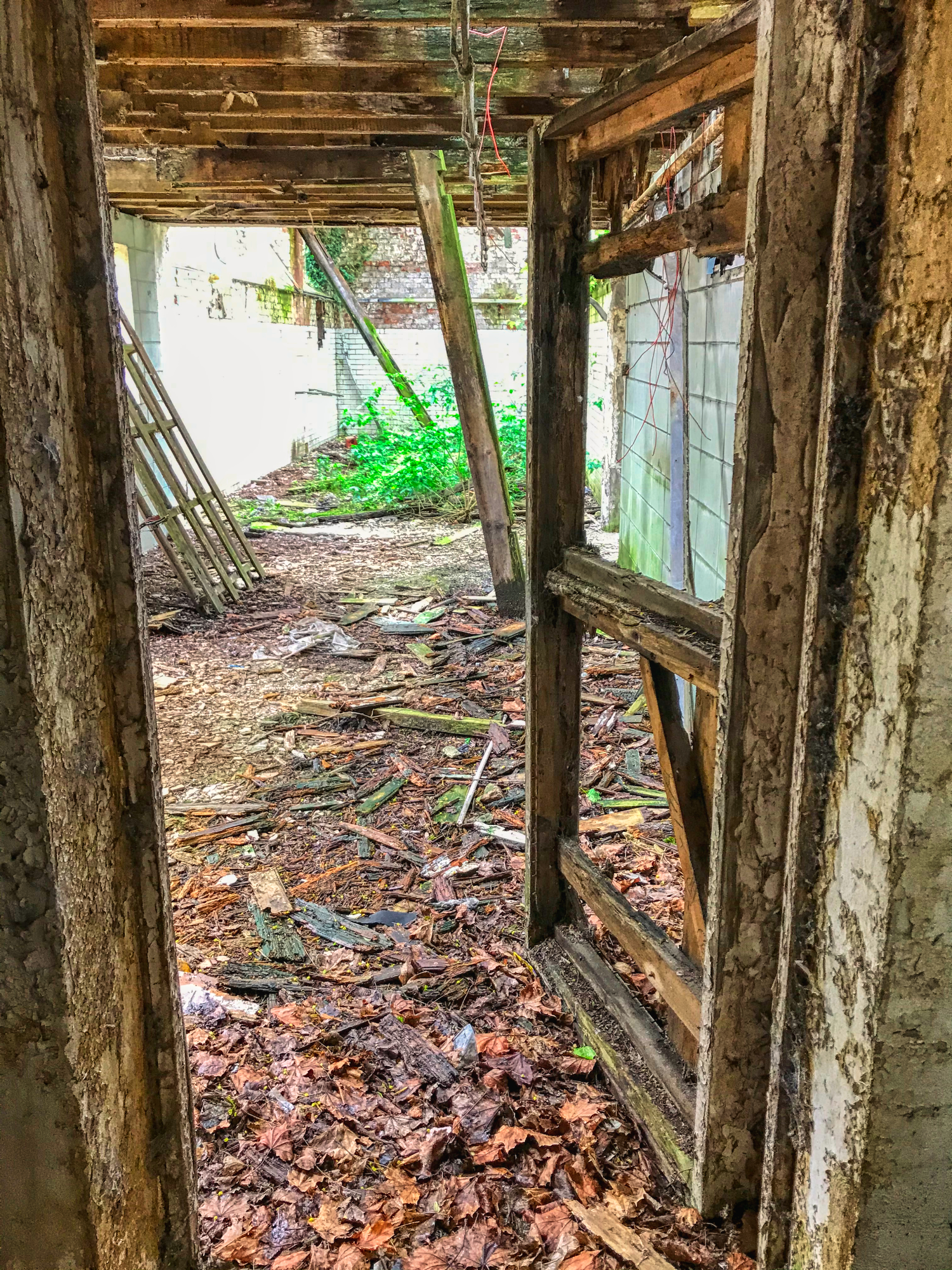 I do like my serious close-up decay shots with a healthy dose of old vintage spider’s webs. 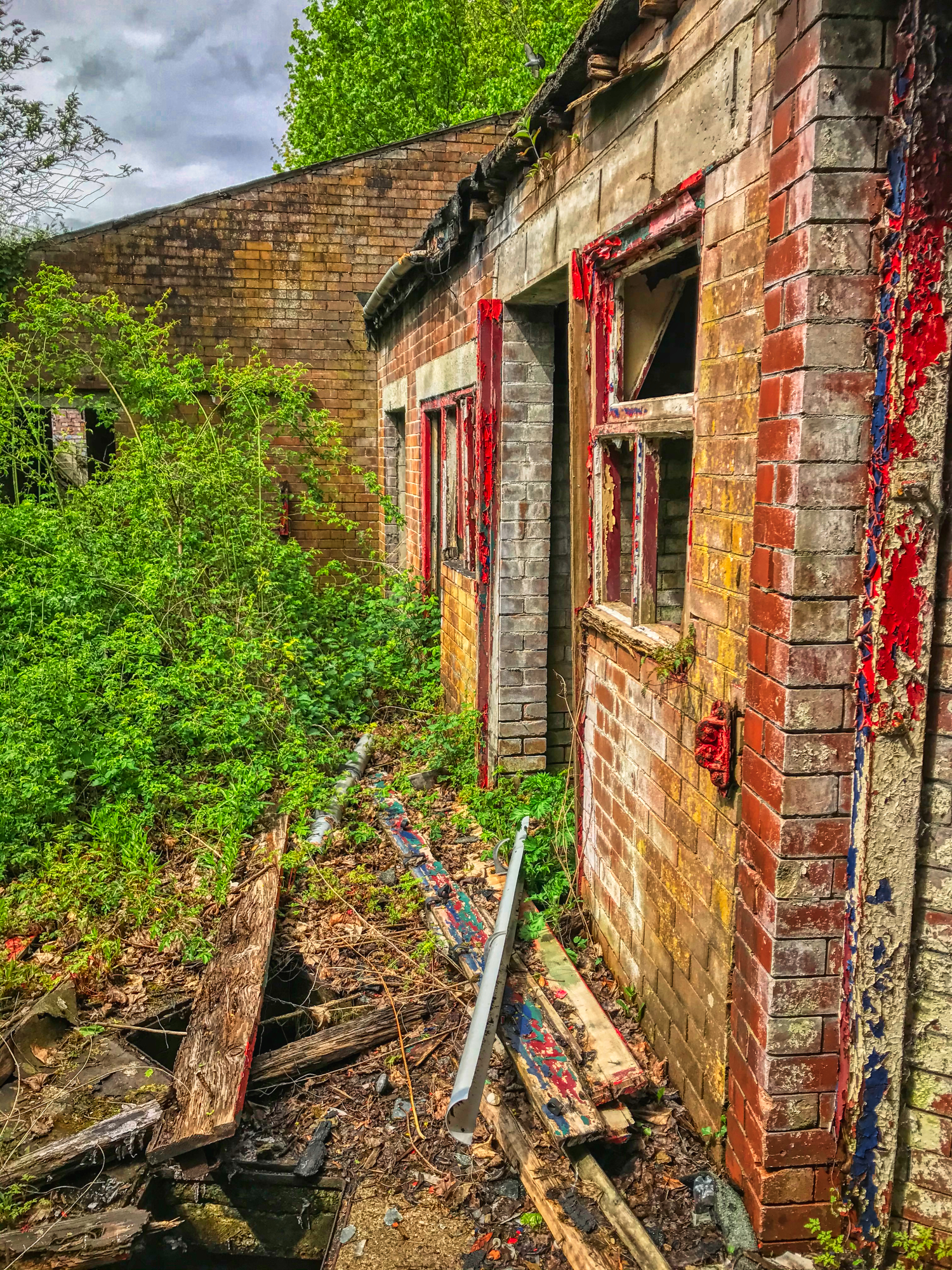 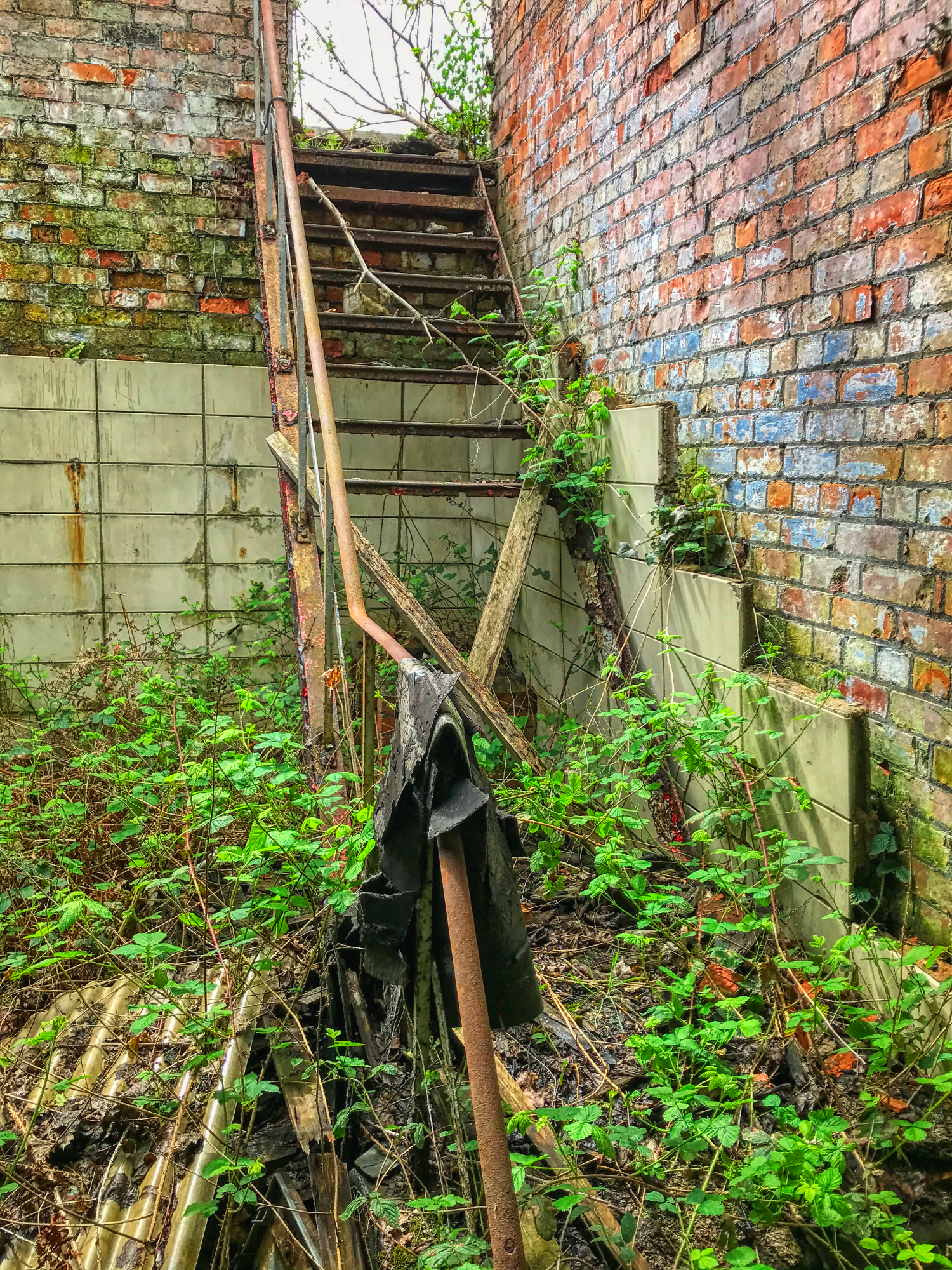 To break the monotony I did contemplate climbing the iron steps only to find several of the lower ones missing. @anidiotexplores struggled a bit, got stung by those prickly things and did eventually ascend only to report bugger all at the top. 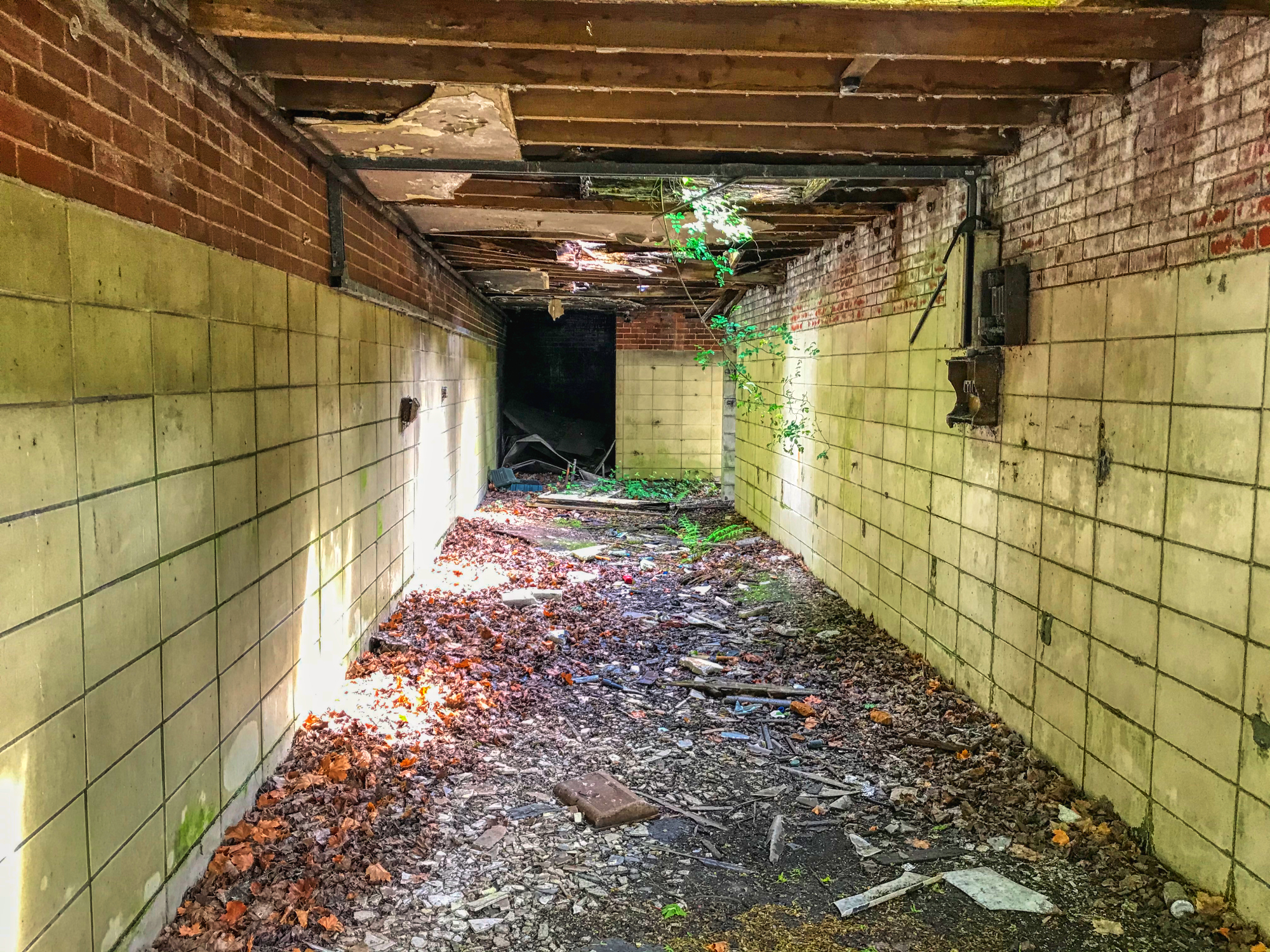 You would not think this old abattoir is so central looking at this set of photographs. 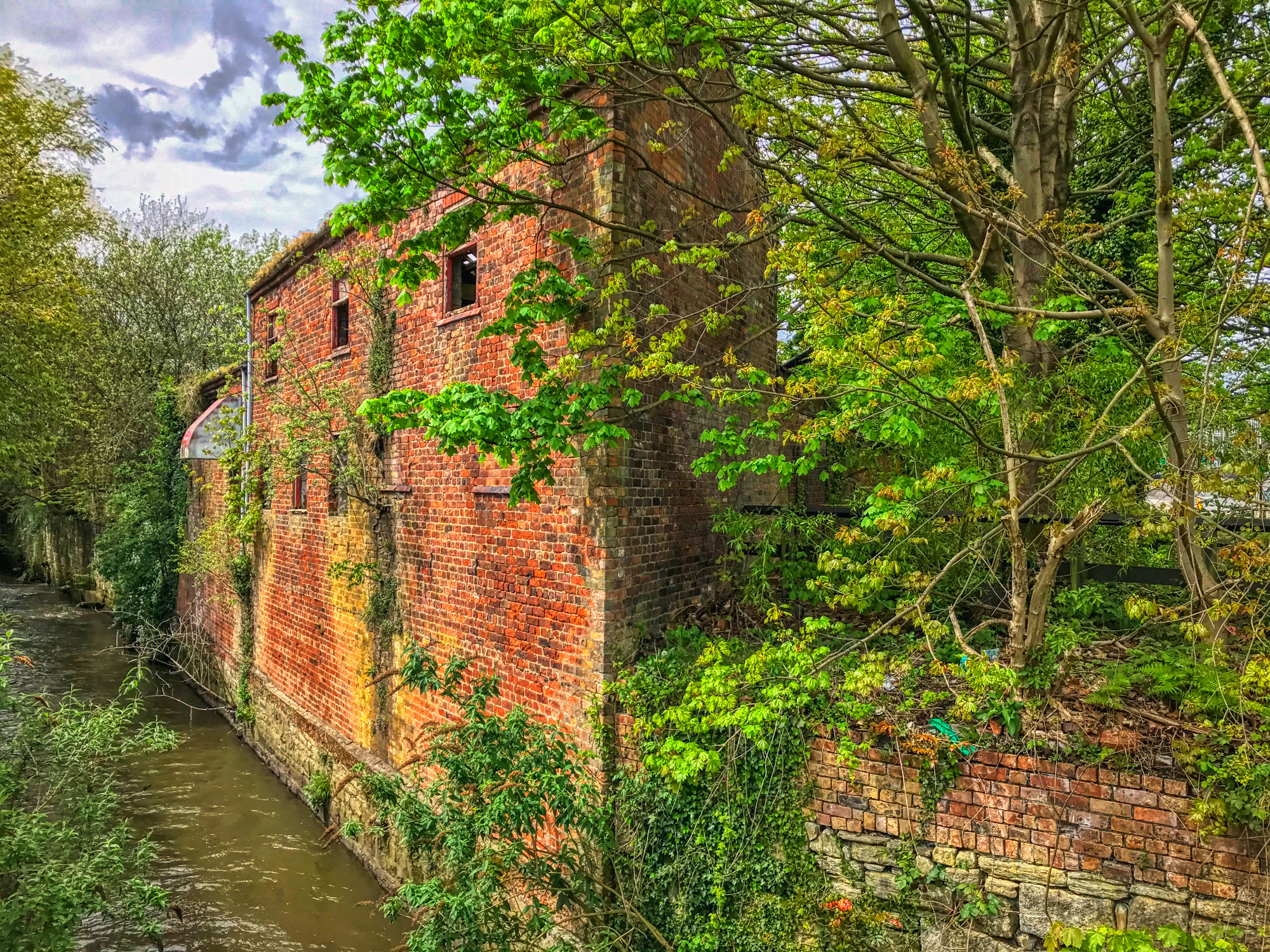 We walked around the back for an alternative view and discovered the premises perched right next to a fast-flowing river.

Did they ever throw unused animal parts through the windows? It always makes me wonder, or is it my unbalanced imagination on overdrive again? 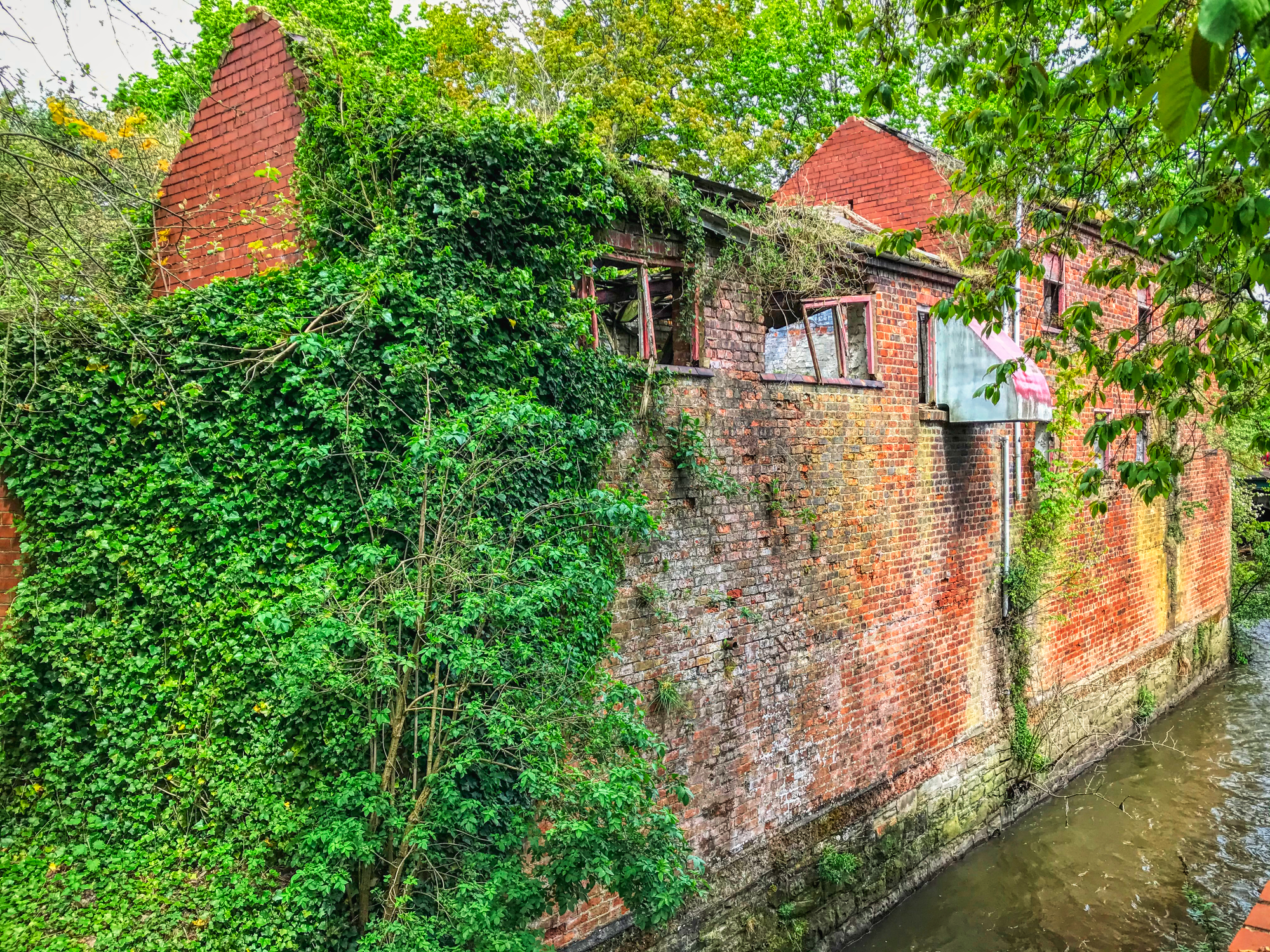 Considering it was a 'freebie' and drive-by as we call them we could hardly complain about the 'quality'. A derp is a derp, and you can bet this ahem.. gem is off the radar.

@meesterboom
about 1 year ago (Edited)

I bet they did throw stuff in the river!!

I bet they did throw stuff in the river!!

It could have been a reason for the demise. 'Cows bollocks found floating in the river'.. I can see the headline.

Imagine a veritable sea of them, people would have thought it was some new invasive species of something!

That's not the same Slaughterhouse I know. When I see that name I think of these guys, hear of them?

Cant say I have, but always up for new music listening!

Cool! I like those guys a lot. 10 years ago'ish I first saw them at a dive bar in Long Beach I rode my bicycle to. It was in the hood. They opened for a punk rock band so the whole vibe and crowd wasn't their style. But I still enjoyed the show. Then Eminem got ahold of them and the rest is history.

Do you like reggae? Check out this one. They're called Sinizen. That song's about Sunday's, figured it was a good time. The singer of that one is (ready?) my best man's wife's nephew. 👍🏿

Lemme know what you think.

Photo 7-8-9 seem like they might did butcher works. Now they have made me remember the movie, Wrong Turn :)

I haven't seen that one.

@blewitt
about 1 year ago

So much cool shit to explore in the world and I feel like I’m doing none of it!!!

Your too busy taking large influxes of MtG Beta collections. What I wouldn't give to see something like that again. Its been years!

@blewitt
about 1 year ago

We still have a bunch of that stuff...gotta get around to finally moving the rest of it!!!

I bet they did throw stuff in the river.

Slaughterhouses are the leading industrial point source of nitrogen discharged into waterways. Industrial meat and poultry processing plants dump huge volumes of pollution into America's rivers, threatening our health and harming our environment. ... Pollution from slaughterhouses contributes to algal outbreaks.

And that will be the end of my eating meat.

I know it is gross, thinking about it all, but, I must say that those shots you took are exceptional. If you had not told me what it was, I would have never known.

The bricks, the colors of them, with the greenery bleeding into the scene. Simply striking, and honestly, the close-ups with the spider webs were tres cool.

Thanks again for the tour. You take us to the best. (Cough! Cough!)

I have to try and find something even in the derpiest of derps! I did suspect they dump some of the waste in the rivers. Quite handy one being right there.

How much was parking?

Also, how long do you think til the pandemic economics provide you with some new abandoned places to explore?

It was free on this occasion but can vary a lot from town to city. Its the principle of me bringing trade to towns that are turning into ghosts towns and having these charges demanded of me.

Also, how long do you think til the pandemic economics provide you with some new abandoned places to explore?

With lockdown ending many are being renovated. There are less to find now, and the scene is starting to stagnate.

Really!? I would think many places are becoming ghost towns because of COVID and the economy. I heard Japan has more and more towns like that. Even Kyoto is going bankrupt although that town will never go abandoned.

a DERP without graffiti, thats a first!!!

Its an exclusive... I should brag all over Facebook!

Gosh, I couldn't go in an old abbatoir, that'd creep me out WAAAY too much! Cool though.

I had no idea what it was at explore time. It looked like some old business that had been left to rot.

That is one rickety old building, think the next anyone in the area will hear of it is the crash when something gives and it comes tumbling down.

Many times I think I am going to become a cropper but so far, have escaped!

Do you find you have esp for when things are probably not going to hold now? :D

@wwwiebe
about 1 year ago

Did they ever throw unused animal parts through the windows?

I can't help but think that yes, they did. Ugh. That's a nasty thought.

What a gloriously horrible find! 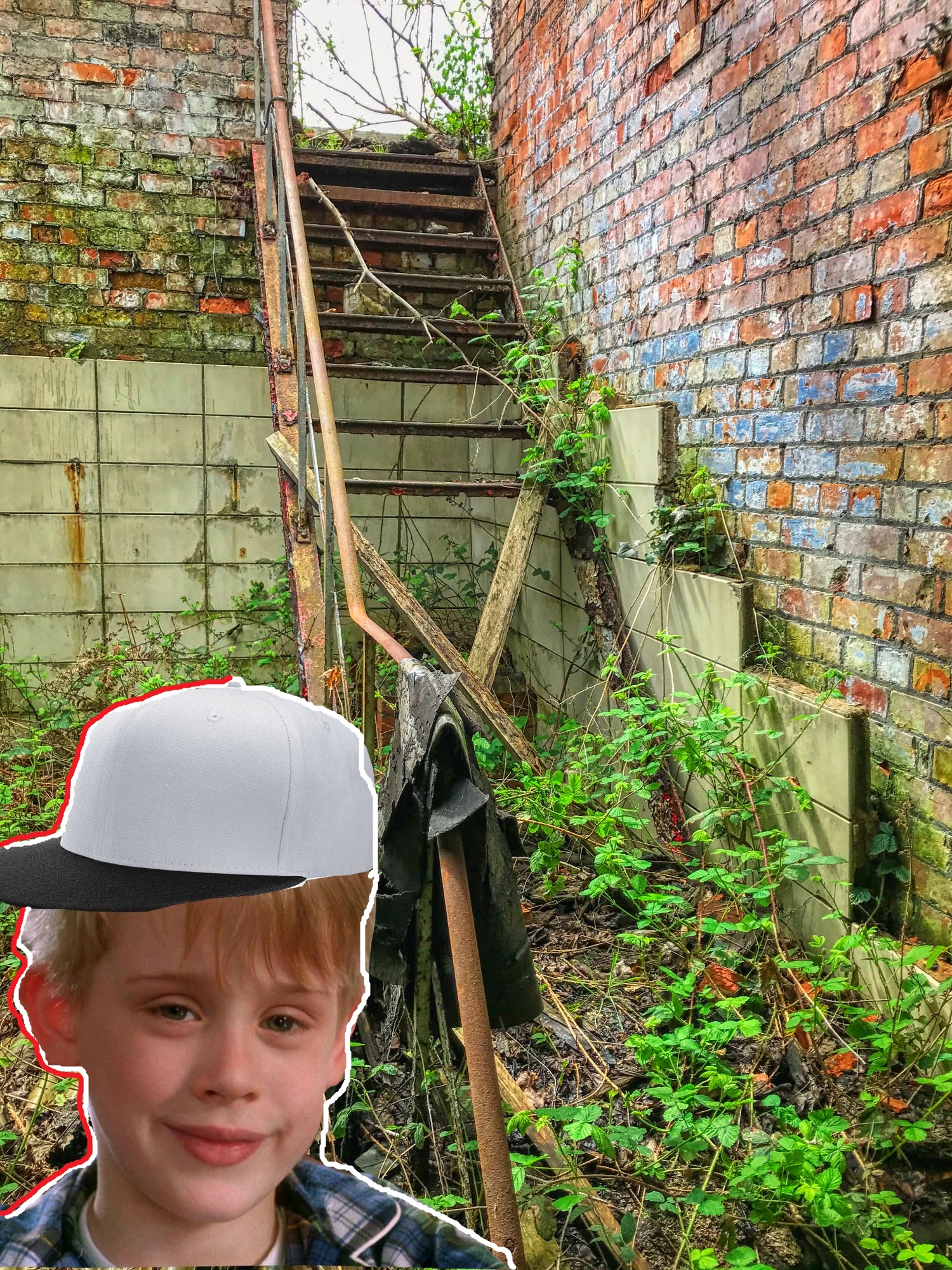 Nothing wrong with Quorn! I wonder how many animals spent their last minutes at this place. Those days are long gone. Looks like it's just a shell with not much left behind for you to find.

The animals thought is horrible, even for me.. a meat eater. Ever since I watched Faces of Death.. I was aware of what happens.

@steevc
about 1 year ago (Edited)

I think a lot of people choose to not dwell on where their food comes from. The British go all soppy over some animals and ignore what happens to others. Such is life.

Not seen that film and not sure I want to.

Not seen that film and not sure I want to.

It was during my video nasty obsession (early 90's). Everything was on VHS then and around a 4th generation copy. Its little wonder my eyes are knackered.

This could be a good location for a horror/ thriller movie tho, pics gave me an eerie feeling!

Oh yes.., I see lots of places like that!

Great read; thoroughly enjoyed the photography and contrast on these shots 👍

Did they ever throw unused animal parts through the windows?

You know they totally did. Or at least if I was a butcher there, I would have.

Seems like a fun day :) It was probably a good idea to stay off that second floor though, a fast trip to the first could be... An adventure of a different type!

Huh, that seems like such a waste of property. No developer or real estate investor buying it? Is it too out of the way to be worth anything?

Not out of the way, in fact very central. Who knows?

Maybe it's expensive to renovate or something. Haha