Tales of the Urban Explorer: The Remains of Hoyle Ing Dyeworks

"This looks a bit pants", I said to @anidiotexplores. We gazed upon the sight before us and guessed hidden relics may not be inside this time

The truth is I should have explored Hoyle Ing Dyeworks last year with @dizzydiscovery during our last large Huddersfield outing. 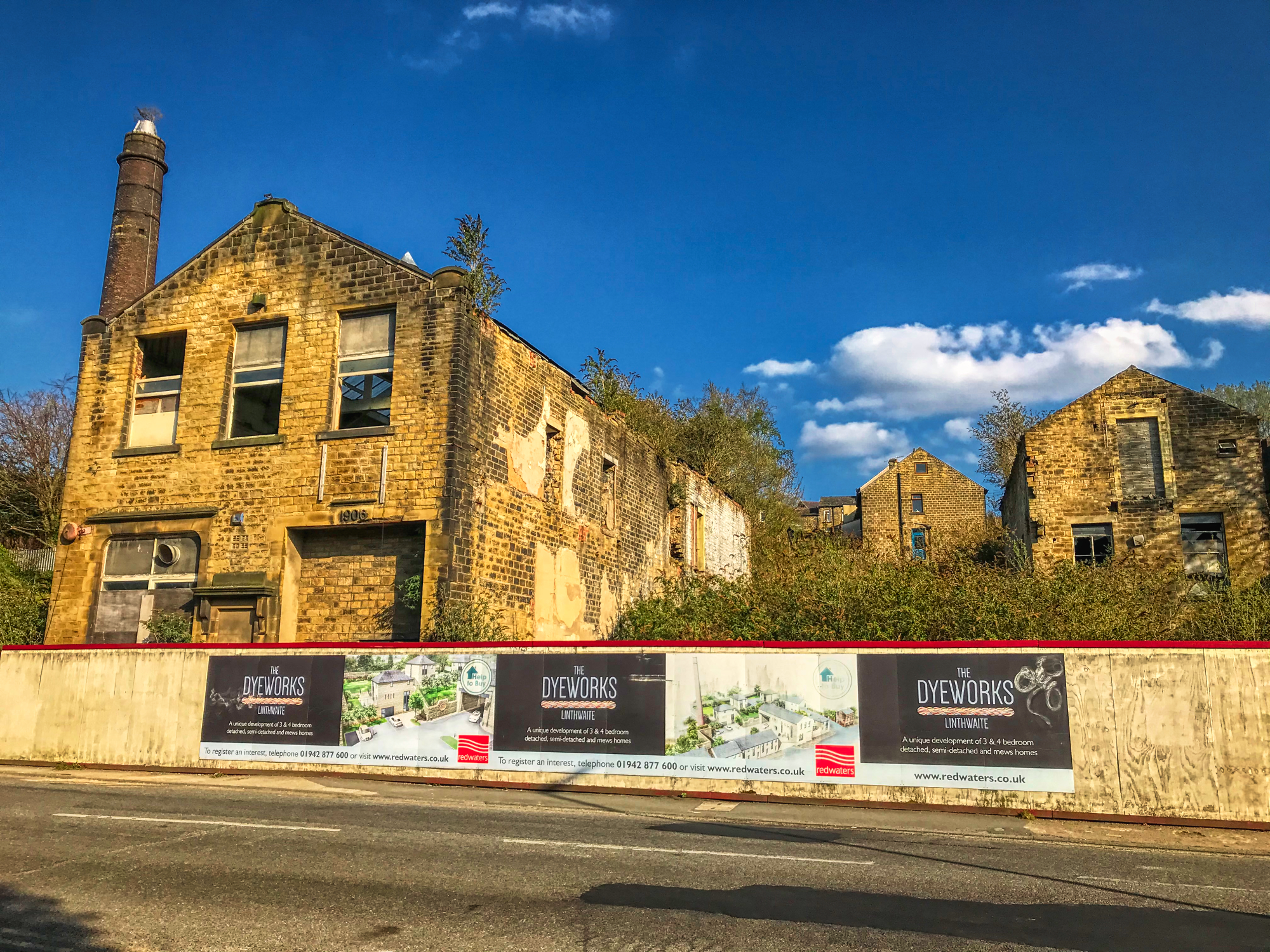 Somehow it had slipped off my radar and maybe there was a reason for that.

There was not a lot left to see

Any longer and it would be worm food and digested into those new-fangled 'little boxes' type houses.

Despite being bad-looking, it was not easy at all to get into the grounds of Hoyle Ing Dyeworks. The front area was covered with herras fencing, and the sides had natural massive mill walls. 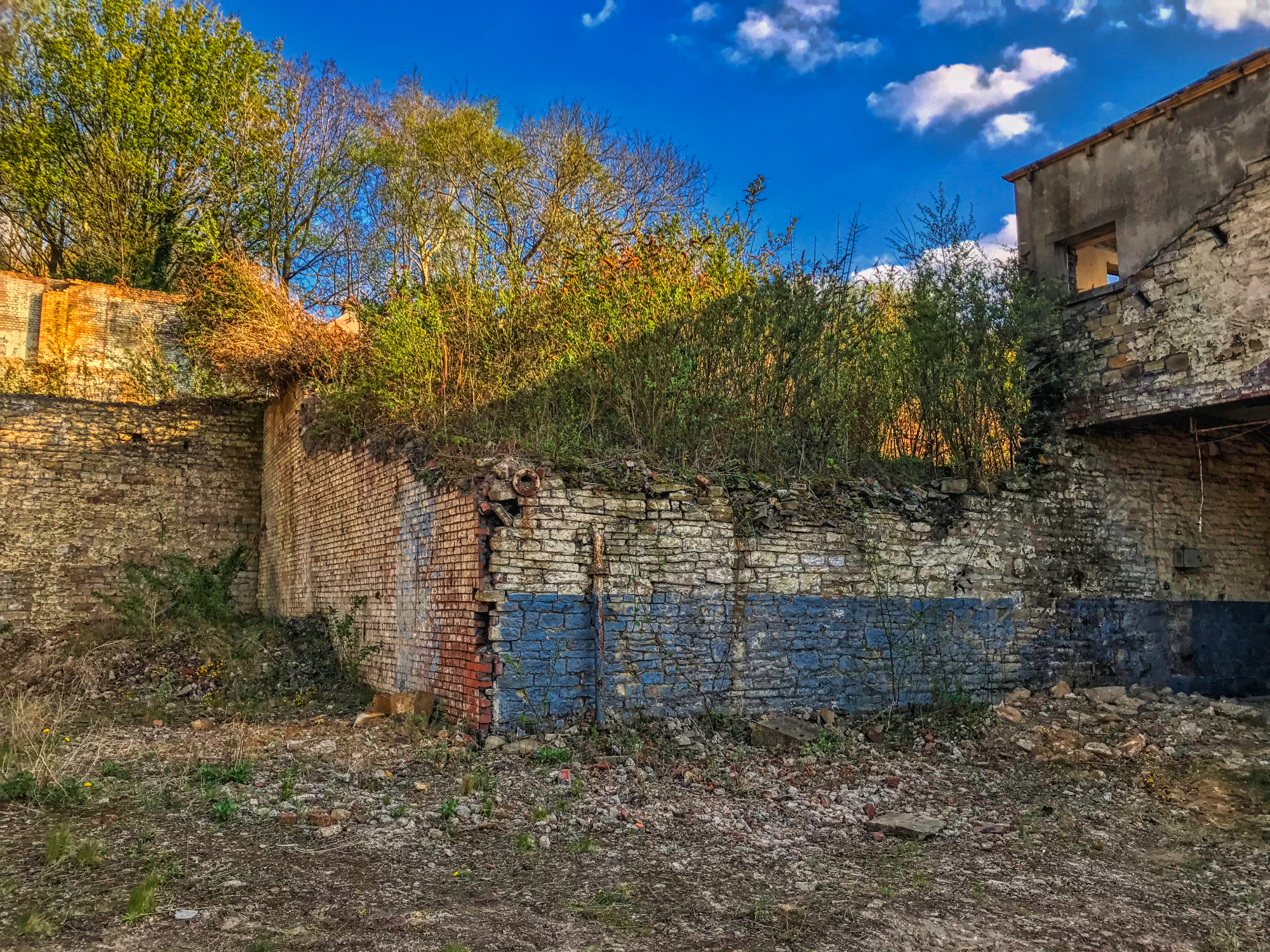 Clambering around the back, we sidestepped the annoying fencing only to be greeted with a 10-foot climb with dodgy decaying brickwork and an uneven landing just waiting to destroy our legs and feet on jump impact.

Surely it can’t be that tough to get in this shitheap?

We had give up on the back and walked around to the front again and I fingered the fencing absently.

What fencing? Someone had made a long sharp incision and one could simply walkthrough. 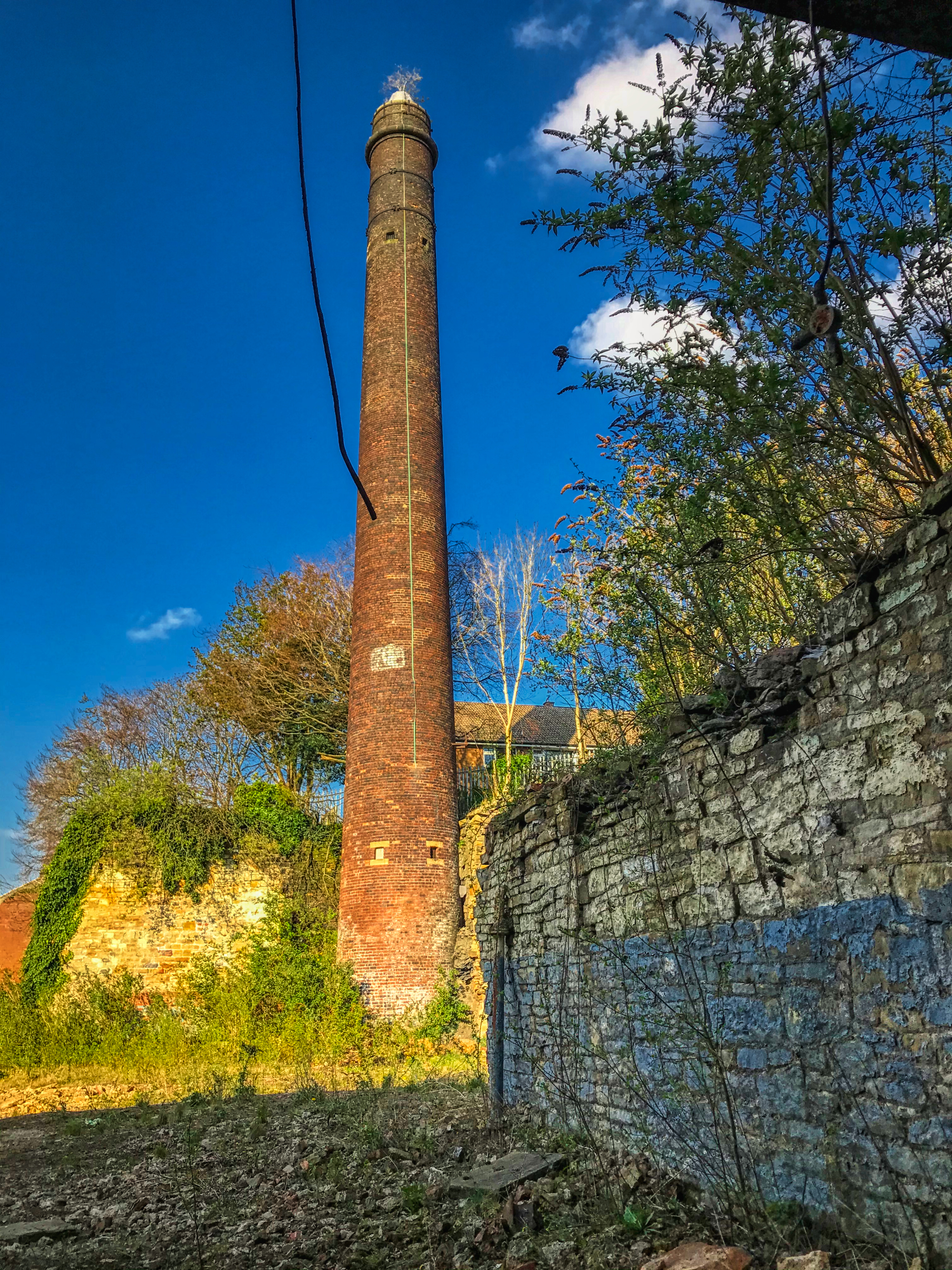 ...'climbing down this wall was never going to happen, I am not a fan of hospitals unless they are abandoned ones'...

It had been looking at me all the time. Talk about almost missing this gem of a place. I would not have been able to sleep for weeks thinking of endless disappointments I would face when entering the dye-works ruins.

The Dyeworks is not as old as the usual type of mills I visit, being built in 1908 and operated as a business until 2008.

It was then used as storage until 2013 when the local arsonists decided it would be nice to burn it down causing extensive damage.

Since then, it has been partially demolished and partially left. Who knows, maybe the funding for the ball and crane ran dry?

We scrambled through gorse and thick bushes to see this sight. It didn’t look very welcoming. 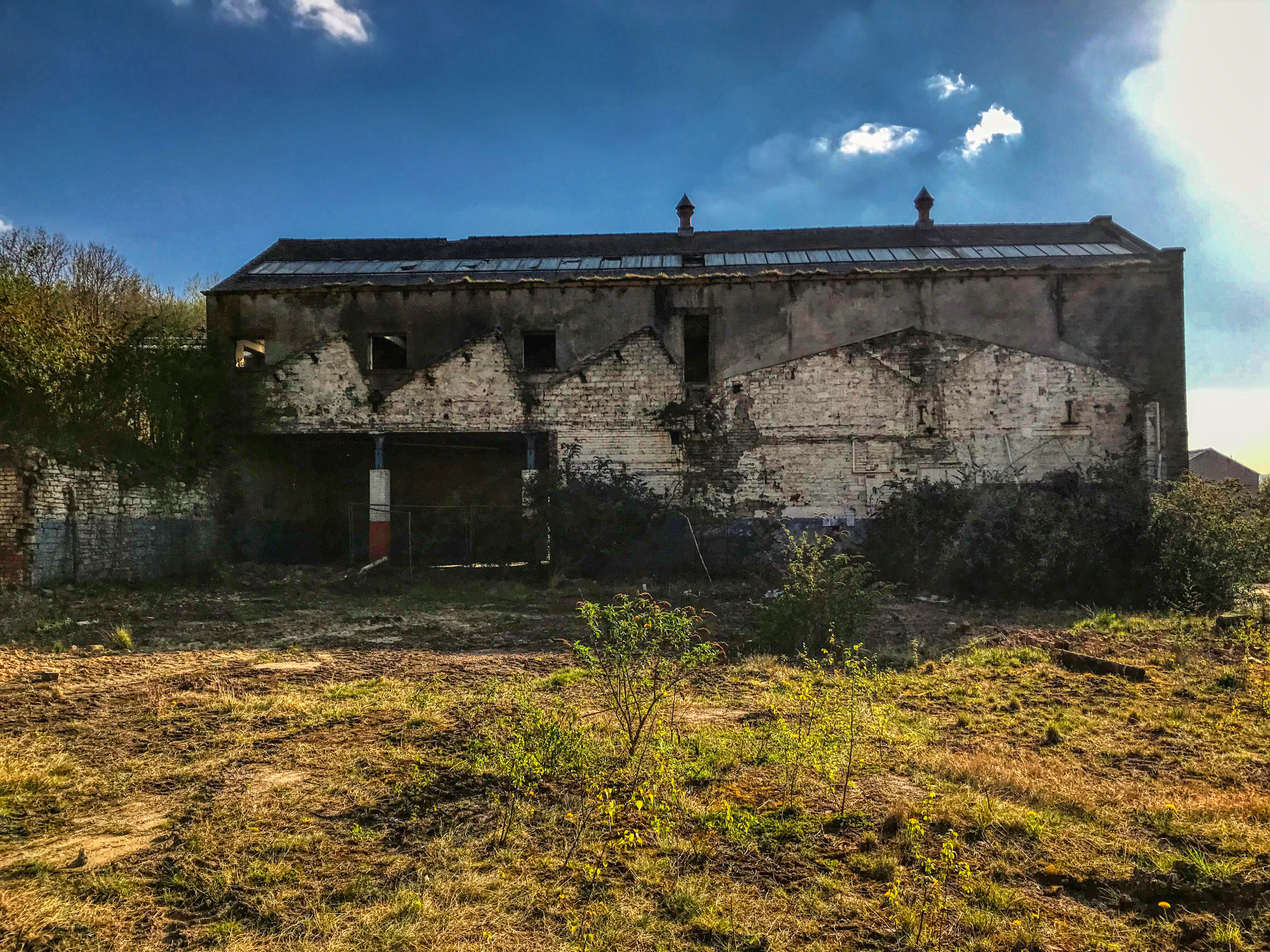 Inside was quite bare but graffiti-free. I usually acknowledge these come hand in hand and was surprised. 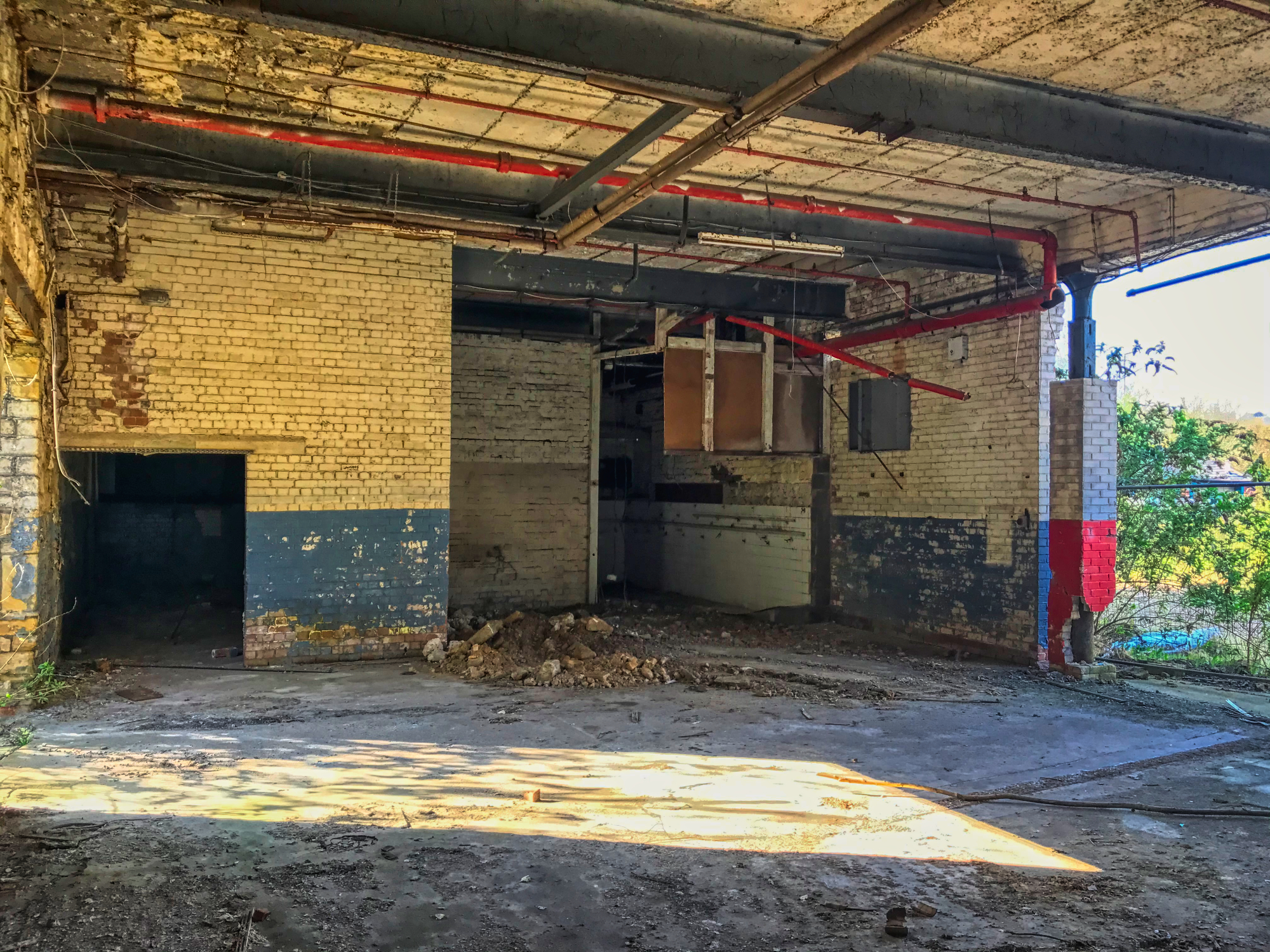 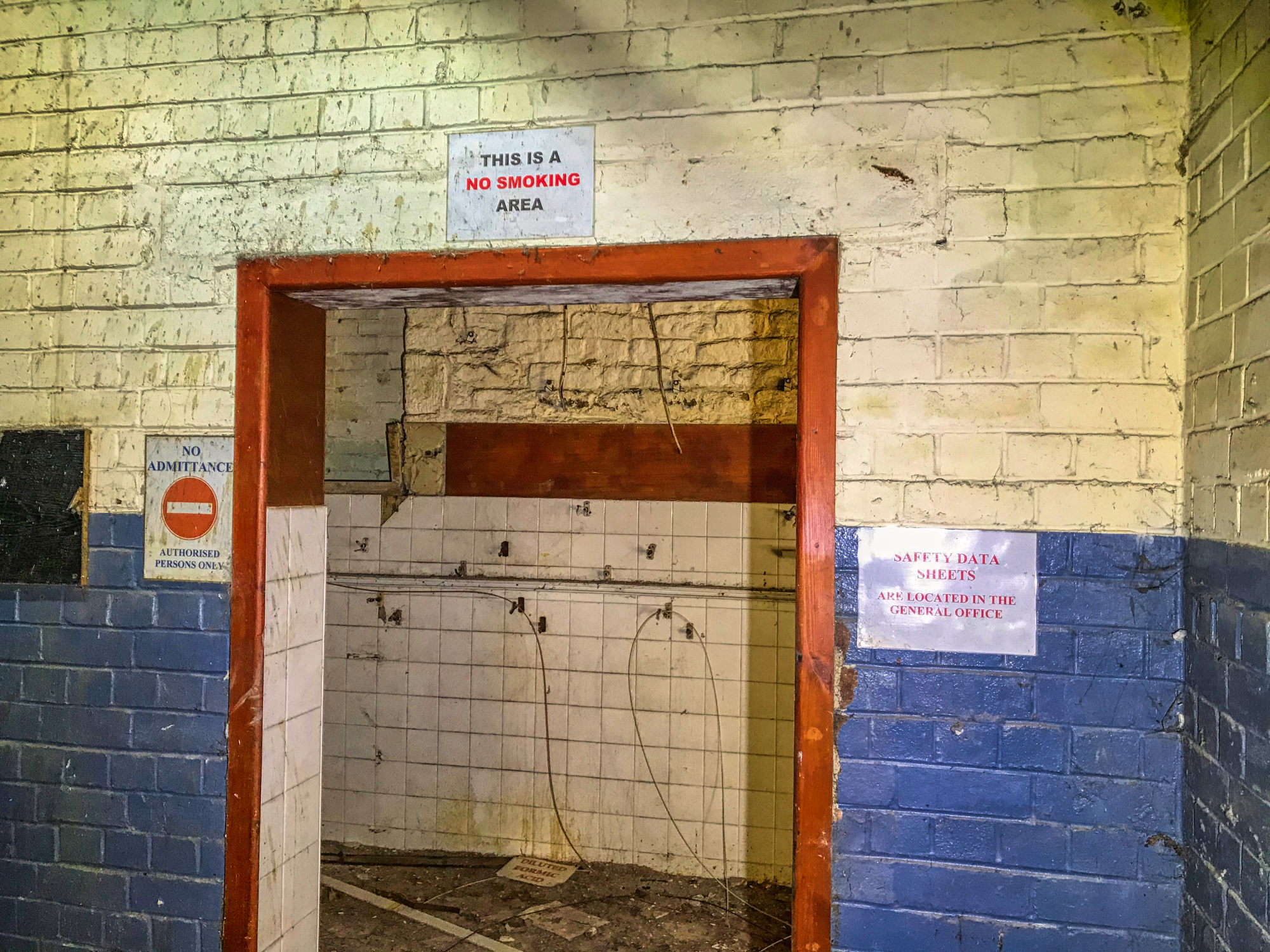 I don’t think the ‘General Office’ exists any longer. I could see no signs of it. 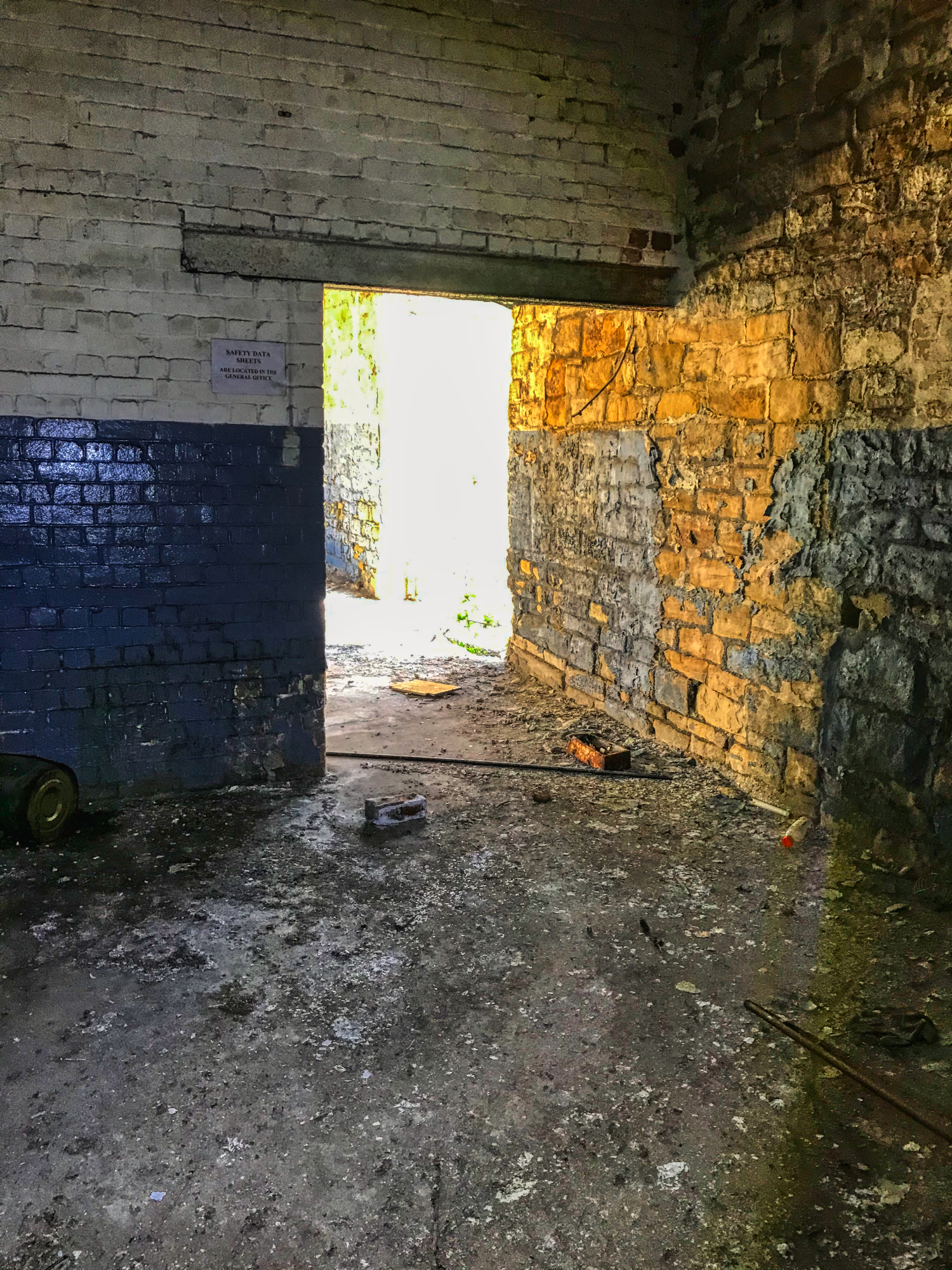 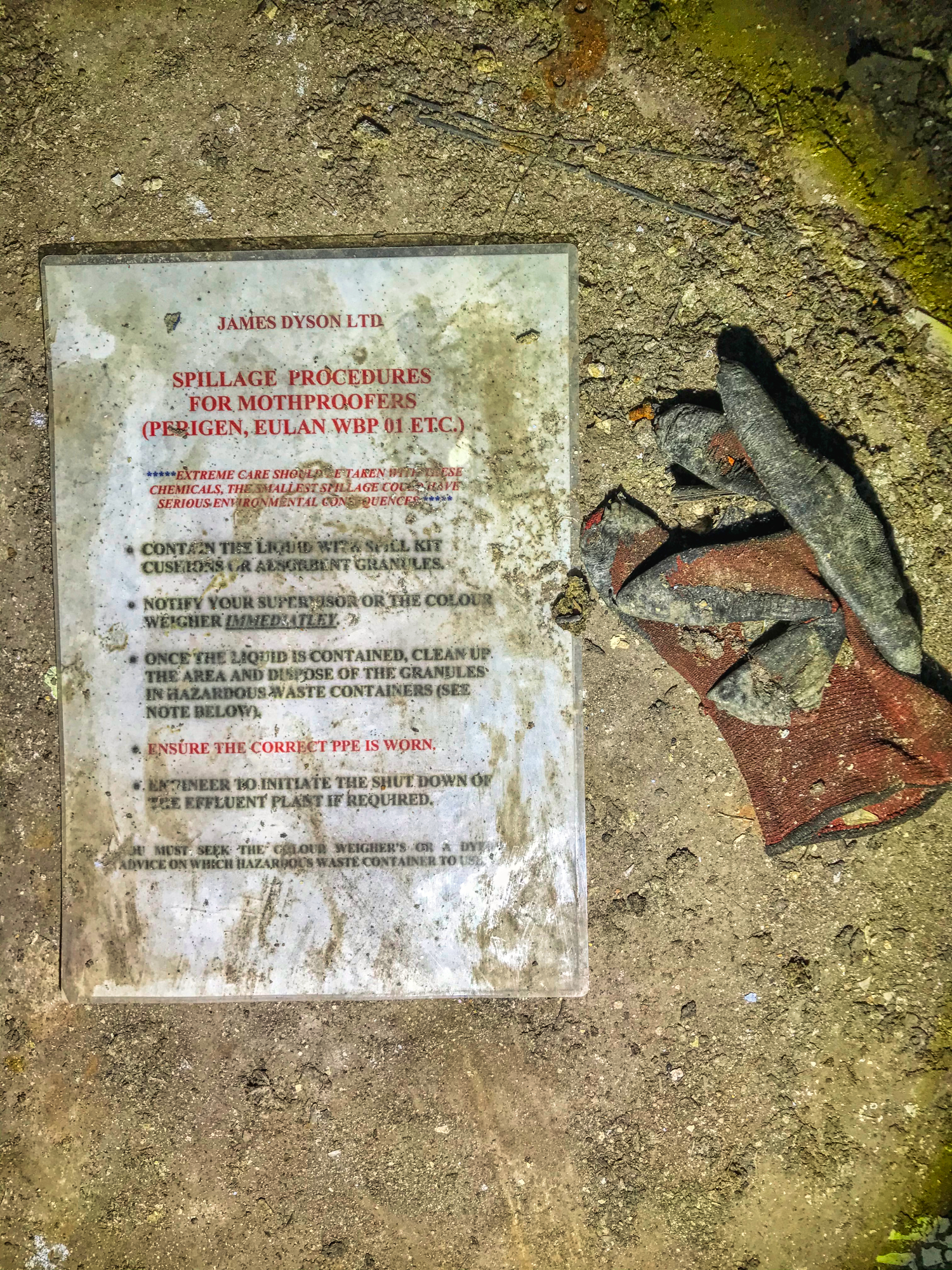 The term ‘PPE’ was invented before COVID then. I would not have recognized the acronym before the virus times. 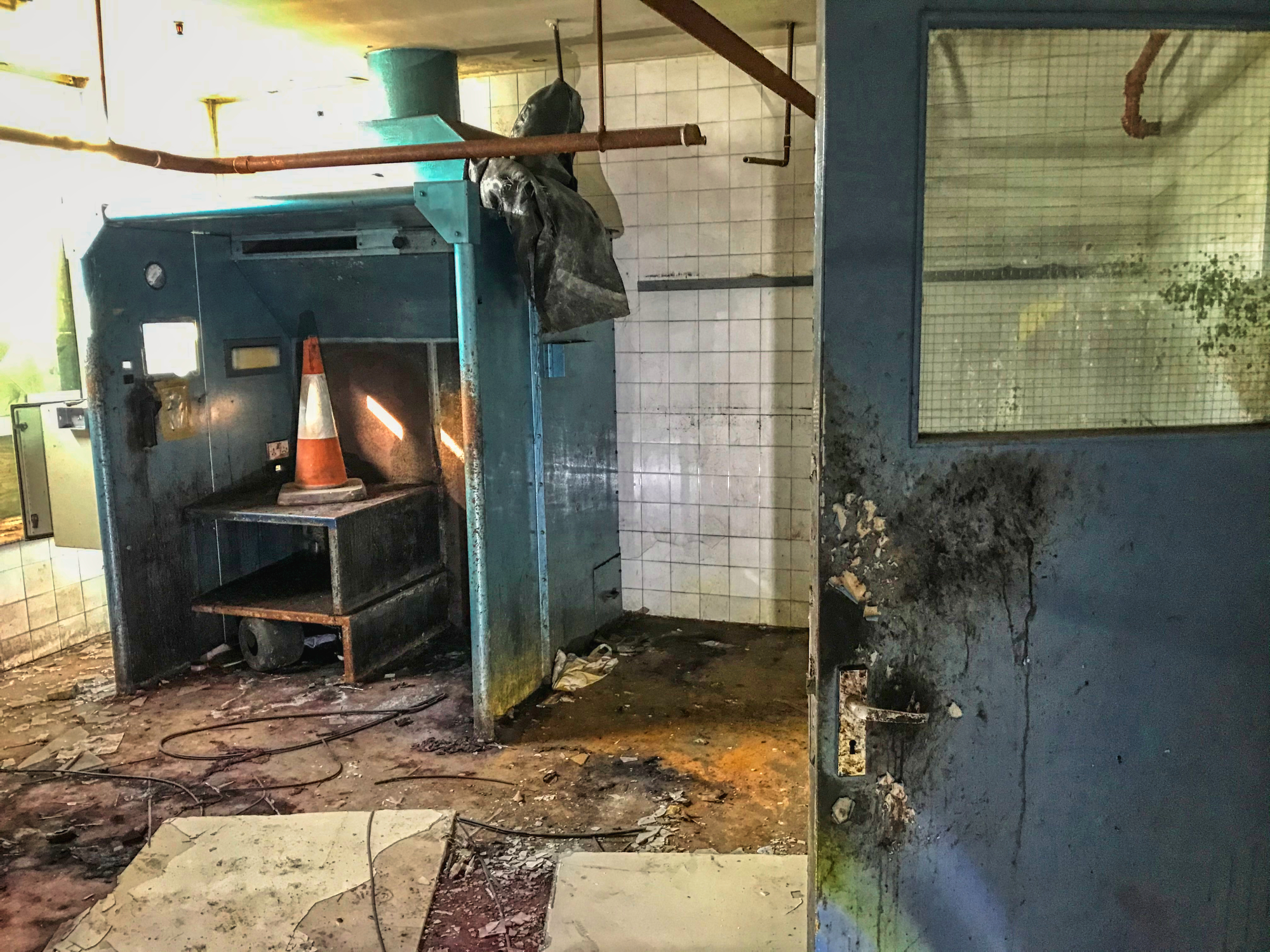 Traffic cones get everywhere; I was amazed not to see a shopping trolley as they are usually more ubiquitous than the former item. 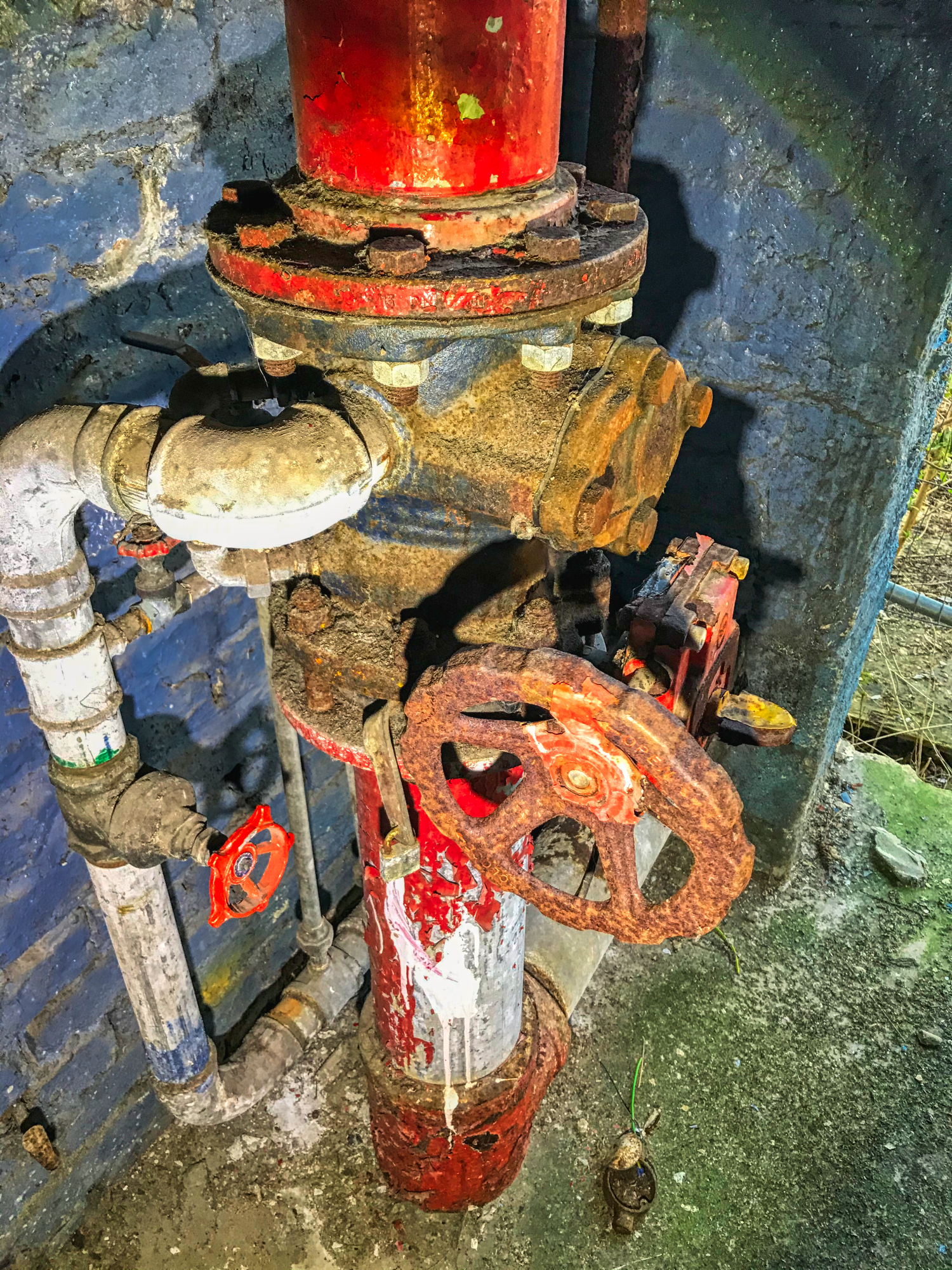 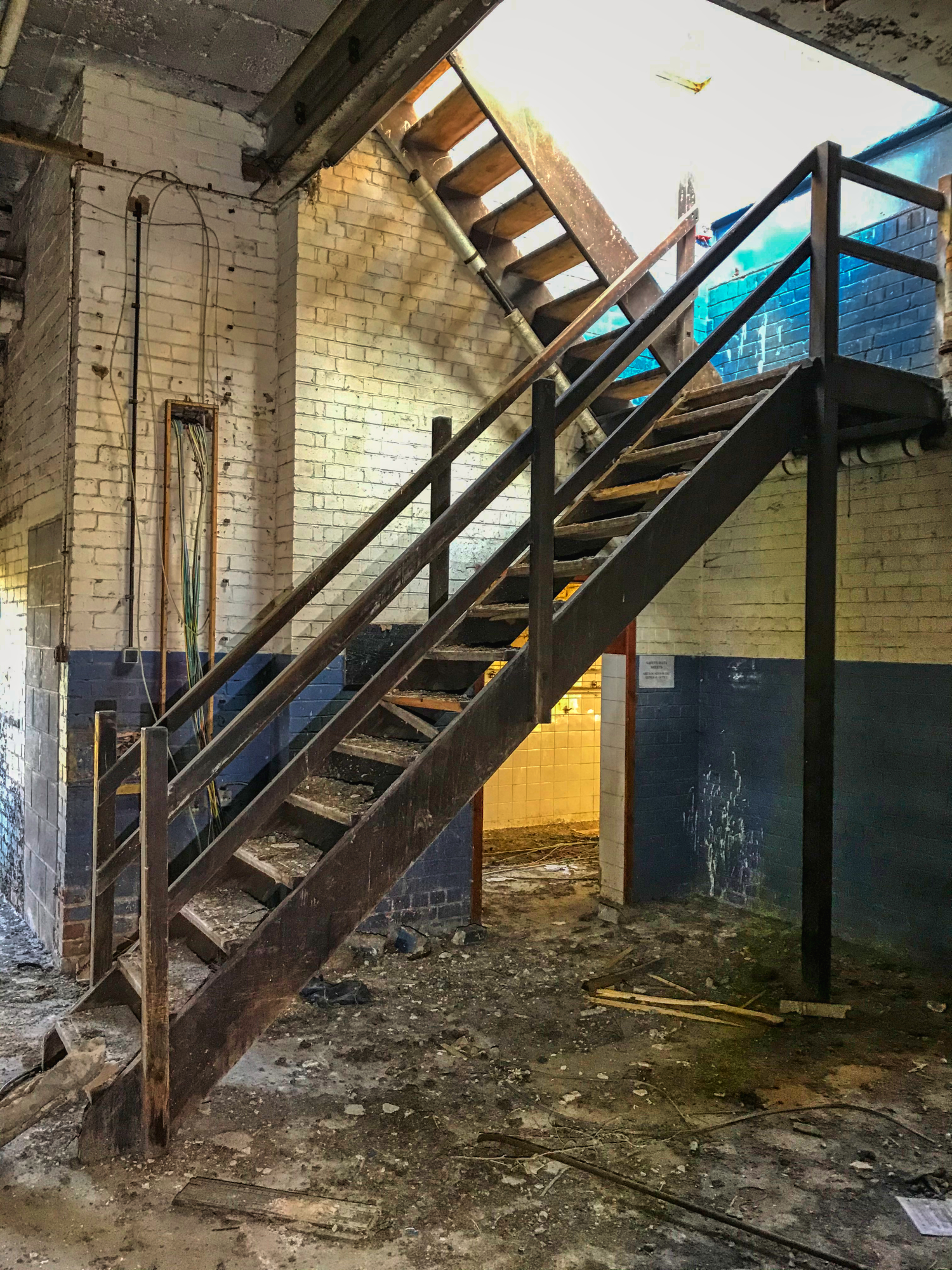 The stairs were wooden and sparingly sturdy. The arson attack could have been in the section that has already been demolished. 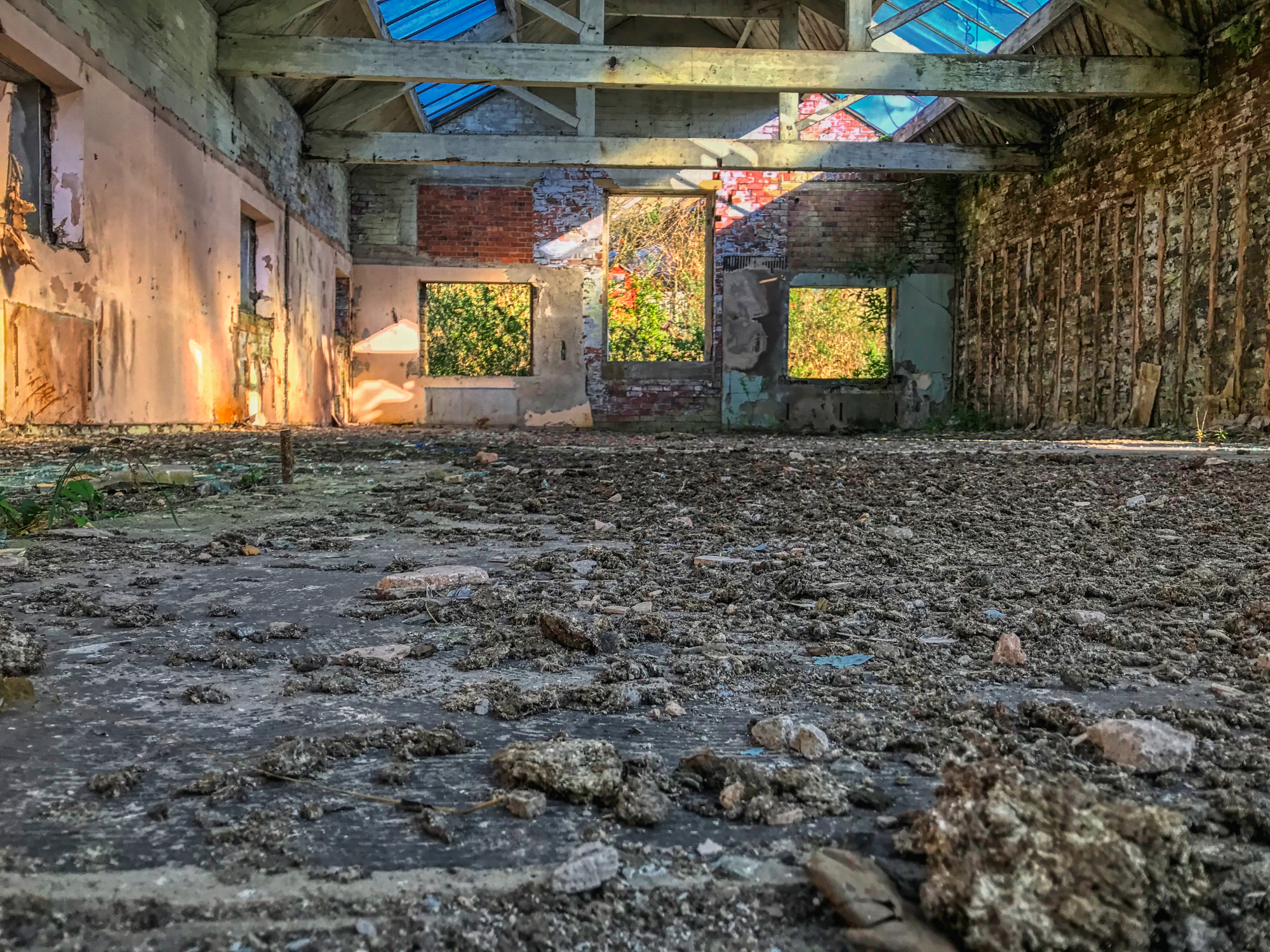 Up the steps revealed copious amounts of pigeon shit and little else. The views were quite nice though revealing another nearby wrecked building. 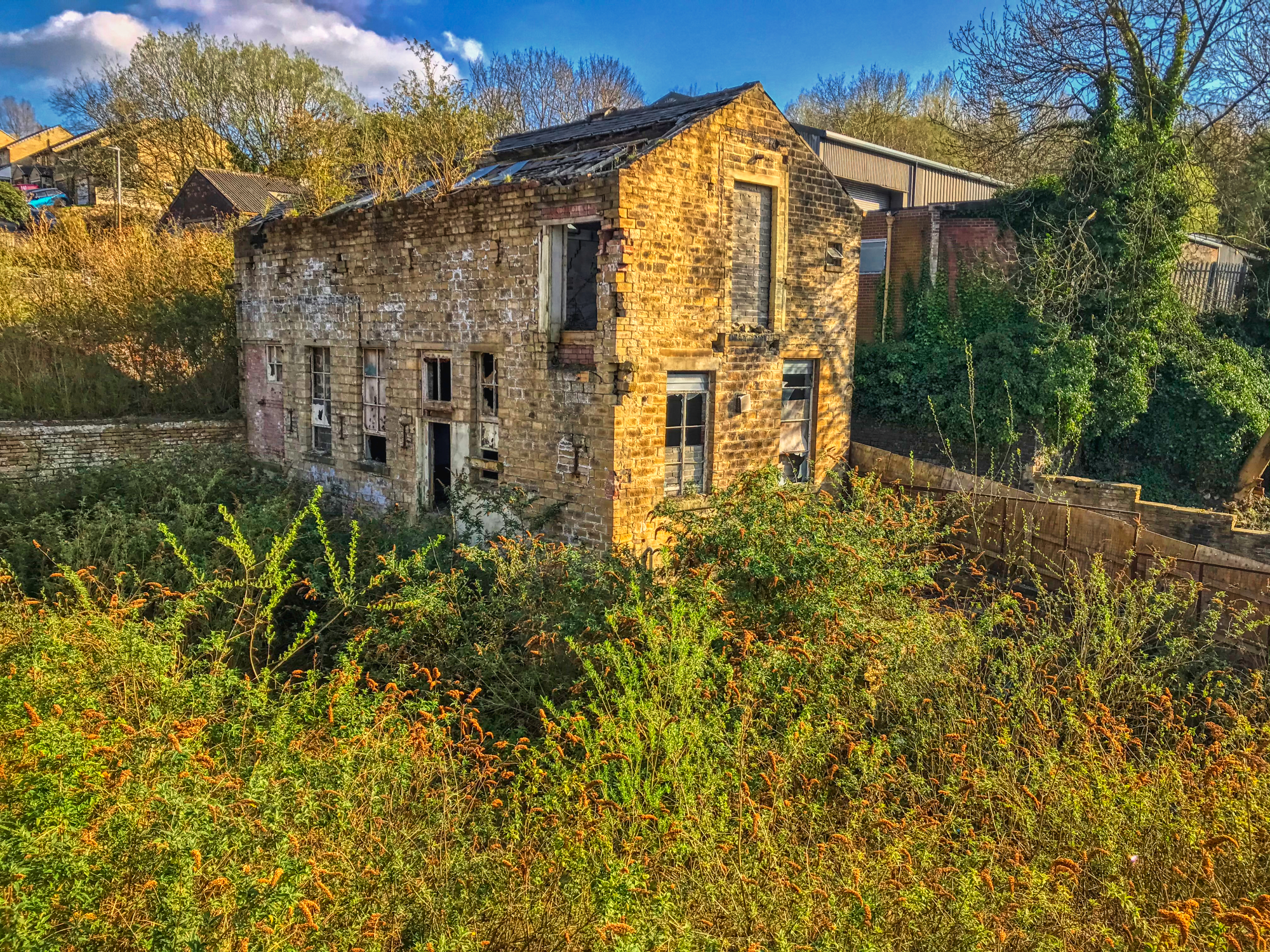 We had already tried to get in this one from the back entrance and failed. You can see the drop from the wall left of it, which would have resulted in jumping into weeds that were 7 feet tall with an unknown type of landing. 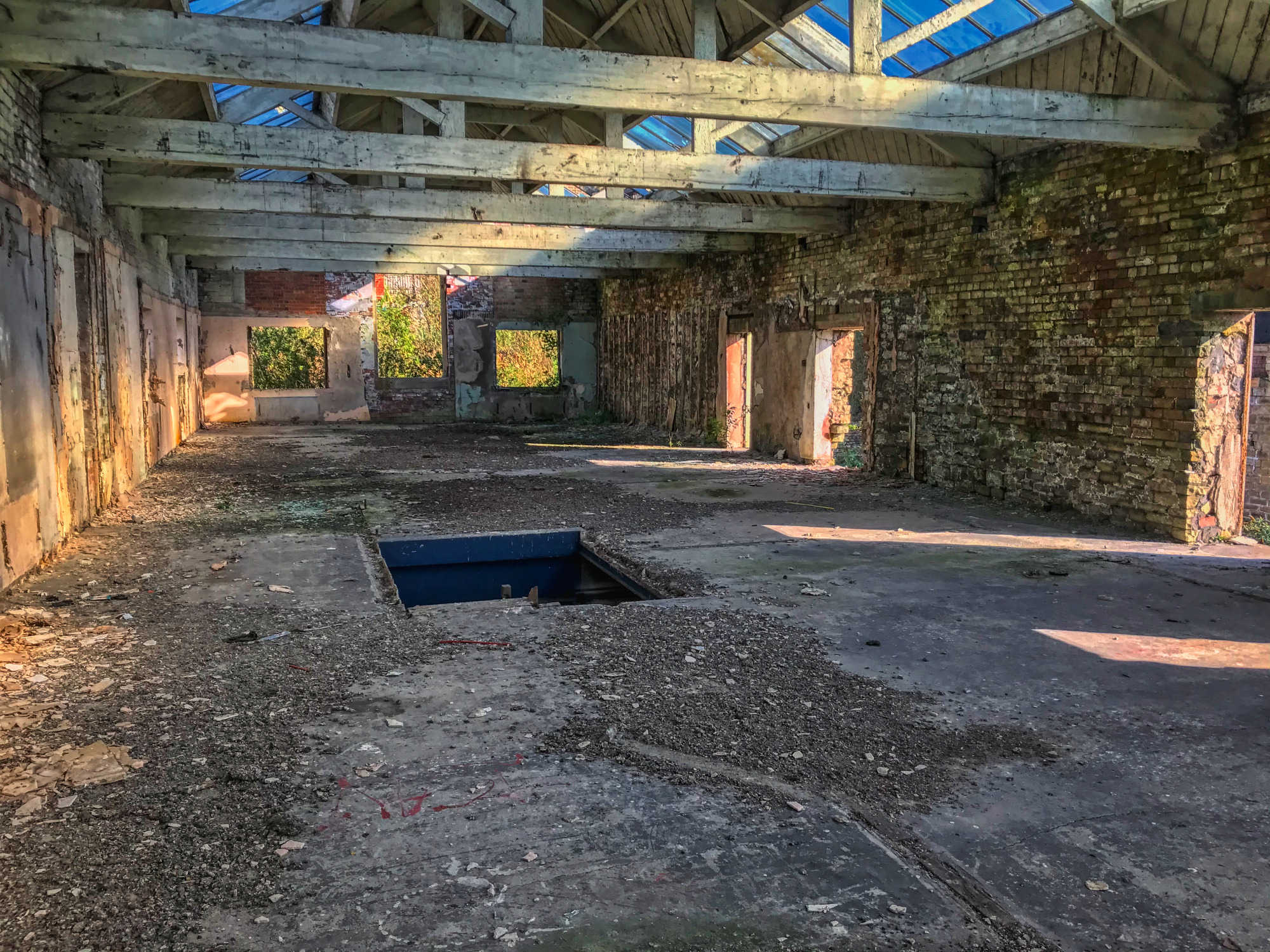 It looks like a big hole but there were steps. 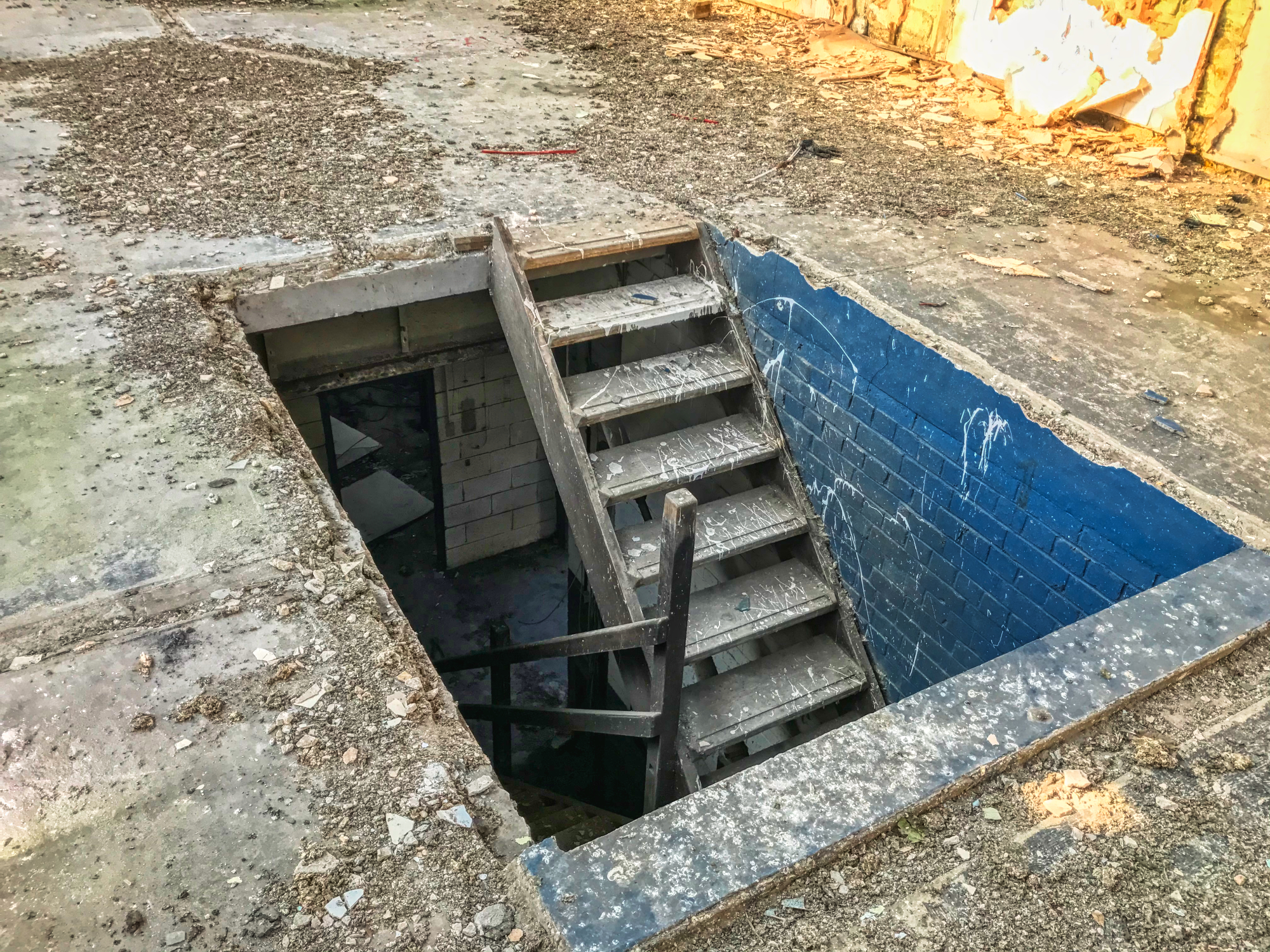 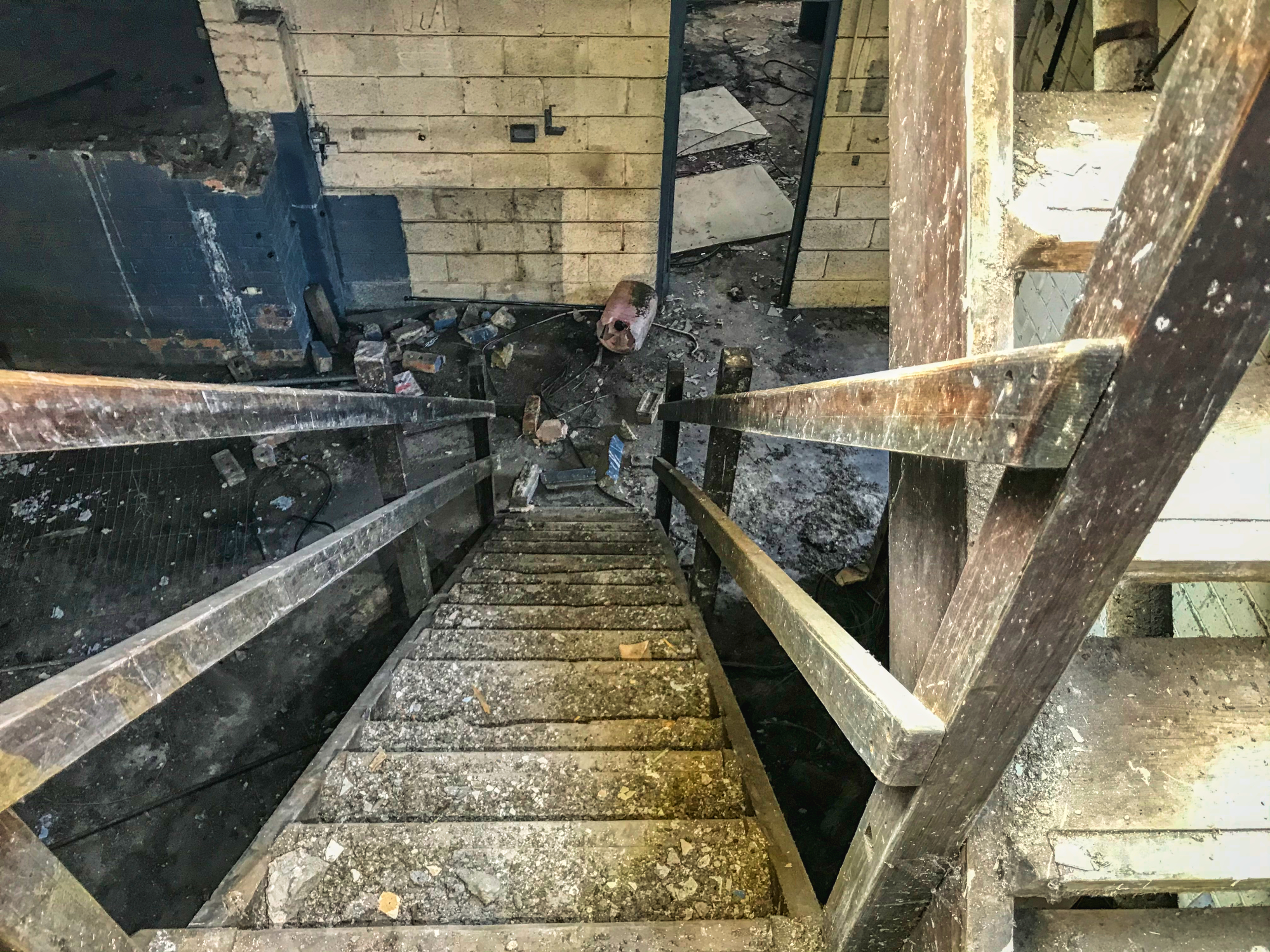 Descending we exited in search of more delectable sights and slavering images in the far building.

After meandering through a dense jungle of tall weeds we got to the entrance point. 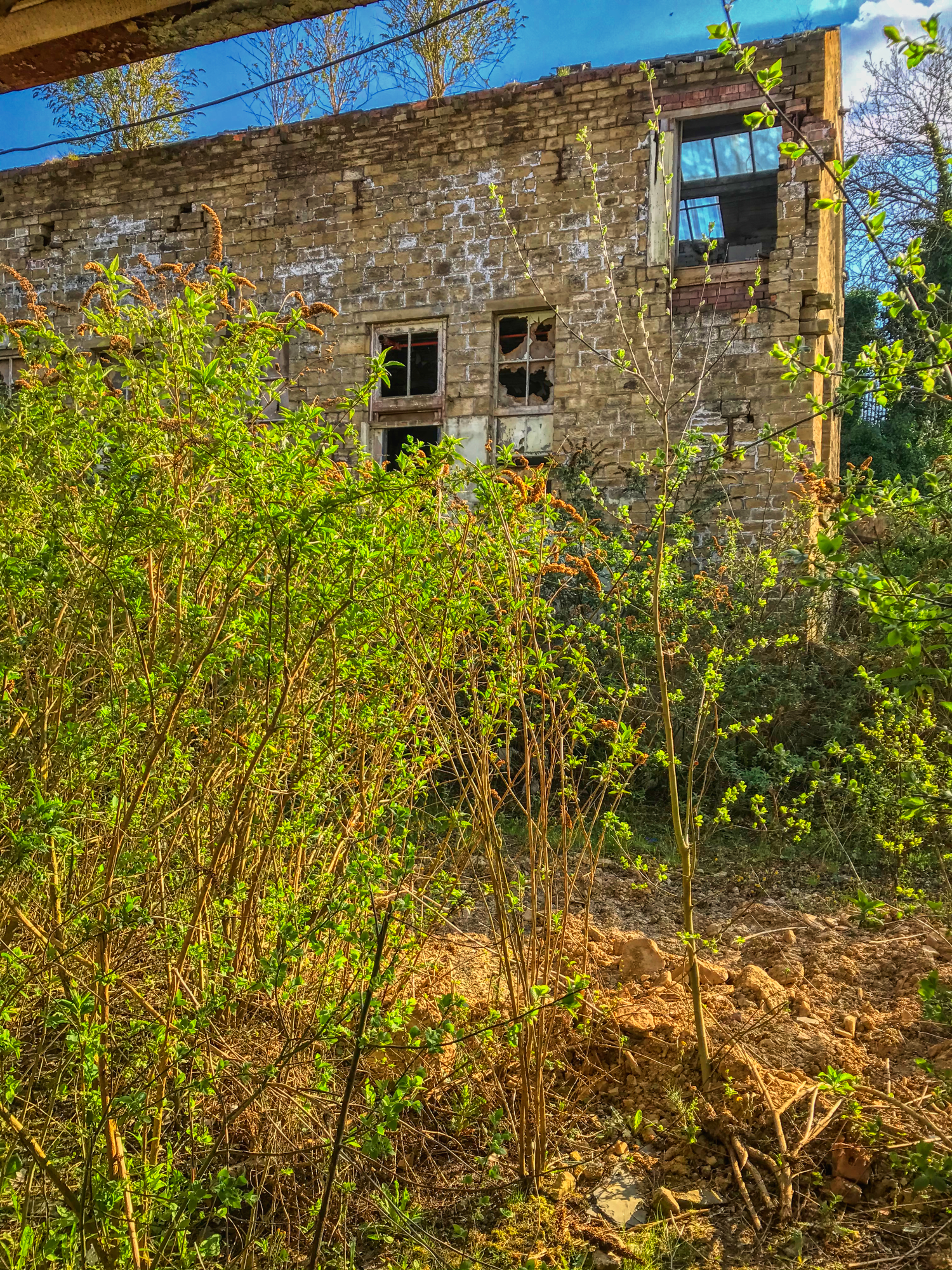 @anidiotexplores made it before me and was already inside having navigated ‘the plank’.

"What's in there?", I yelled up and looking dubiously at the wobbly-looking wood placed up against the wall.

“A fire exit sign”, came the reply. The tone in his voice came back as distinctly unimpressed.

“Yeah man, I think I will pass”, I said testing the plank which was a little too thin and steep for my liking. 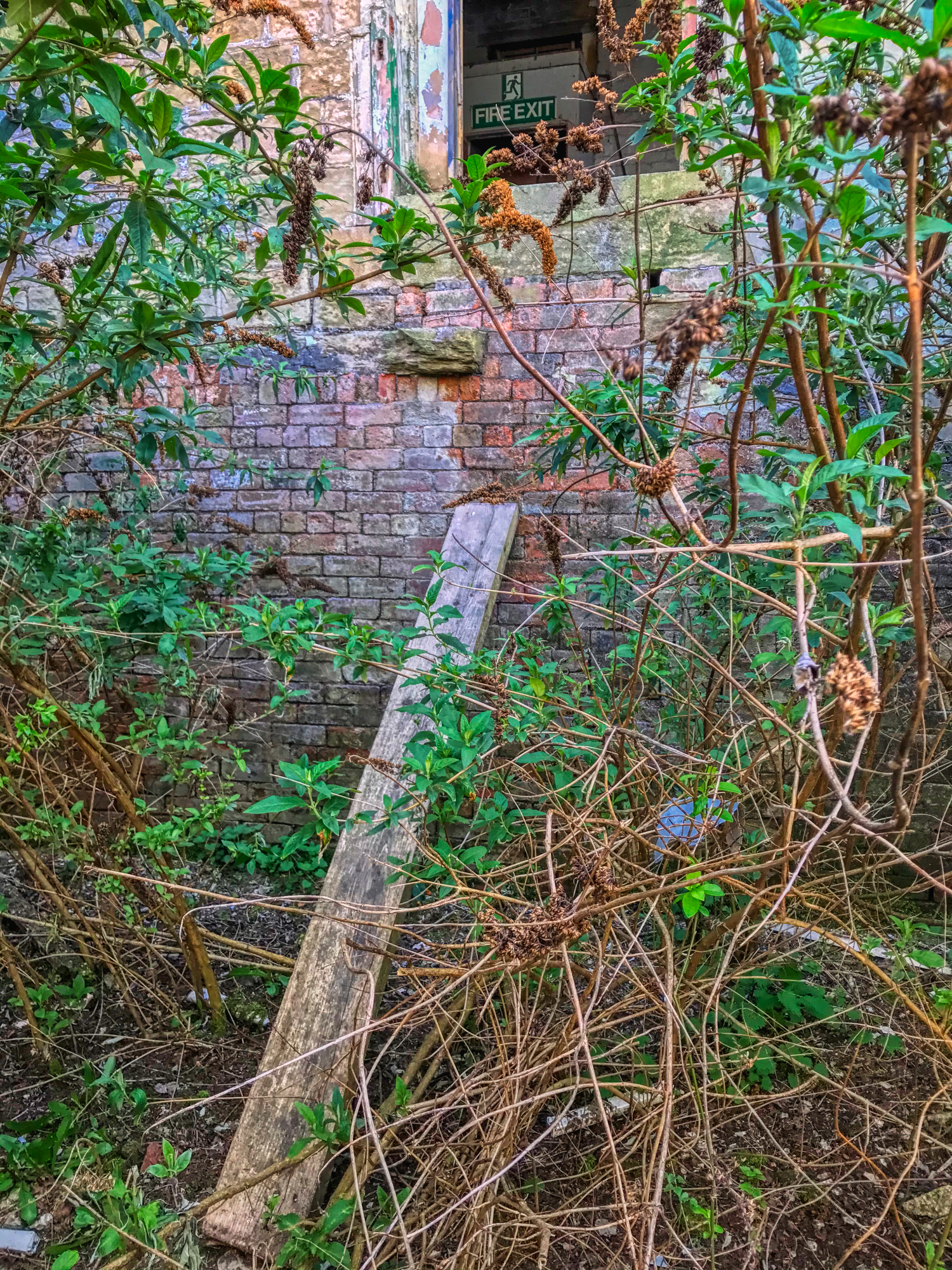 I know my limitations and besides, I could already see ‘fire exit’ from the outside. Talk about clutching at straws for anything interesting.

It had been a long day and this was our last port of call. Not technically a failure but the most boring of that day’s excitement for sure.

Well I googled Hoyle Ing Dyeworks and found the following article from 2016:

Clearly it's all fallen through, hence the reason you were able to still explore in 2021!

They ran out of cash, it does happen often.

@slobberchops Although there is not much left to see it is a beautiful place, each abandoned building site is like a story abruptly interrupted and therein lies its charm. Thanks for sharing your adventures :-)

Getting in is half of the fun at times! It was quite poor inside.

As always I loved your work and I can't wait to someday have an adventure like this. If I ever do you will be the first to know my friend. I congratulate you, as always it is excellent! Unique and wonderful! Greetings and love

Thanks and be sure to post it in Urban Exploration. I manually curate the community.

Thank you very much @slobberchops for your friendship and support. In my country it is very difficult because it is very dangerous, here there is a lot of crime and houses are robbed when they are left alone for two weeks. An abandoned building after three months, they invade it and use it as a place to sell things or they expropriate it to be inhabited. It seems unbelievable, it's crazy, but sadly that's how it is. Anyway, I am always very attentive in case I see an abandoned building.

By the way my friend I wanted to ask you: what other topic could I post about in the community?

what other topic could I post about in the community?

None, it is just for UX. There are plenty of other communities.

Okay, got it. Well friend, I do not lose hope that one day I will have the joy of writing in your community. Until then, I will continue to accompany you as a faithful spectator of your adventures.

The post is very good. the place is very cozy to be alone

Hiya, @choogirl here, just swinging by to let you know that this post made it into our Top 3 in Daily Travel Digest #1296.

Must be in the middle of nowhere , distinct lack of chavvy graffiti!!

the Personal Protective Equipment Regulations 1992, is a set of subordinate legislation laid down under the European Framework, The issue and use of PPE, is seen as a last resort, when risk cannot be controlled by other measures, in the hierarchy of control measures, PPE is seen as the last resort to control "residual risk".

it is one of just a few sets of regulations that require a specific risk assessment to justify the use of PPE and...... wait for it RPE. ( Respiratory Protective Equipment).

As a wage slave I was dealing with these Regulations on a daily basis, along with the COSHH Regs, don't get me started on those !!! ( Control of Substances Harmful to Health. Haha, nice history of masks. It is not exactly rural but they have made some efforts to keep people out. To be honest, there was little inside.

they have made some efforts to keep people out.

Shall I explain to you the whys and wherefores? or just say.......

yeah happy days at the coal face!!
empty too long, too many scrotes and pikeys !!

This place looks like not interesting as the other ones. The valve got my attraction, its so old and rusty. There seem two more buildings near by, are they abandoned too? Have you explored?