Tales of the Urban Explorer: The Doss House

@slobberchops
about 2 years ago
Urban Exploration

This inconspicuous property located not far from @dizzydiscovery’s place was labelled ‘The Doss House’.

This is not my label, but my fellow explorer’s who describes the place as a hangout for dossers though the direct slang translation is not what I would agree with. Homeless? They probably stay here sometimes but it's more youths that have nothing better to do and want to smoke their weed in peace while not getting busted.

While approaching the building we spotted a couple of young lads go down the alley, jump on that pile of bricks (you can see them silhouetted), and enter the grounds. We took a different and easier route which involved scrambling through a few trees and hoping nobody saw us as it was next to a busy main road.

You never know what you are going to find when looking at the external picture, but both of us felt this was not going to be the most exciting explore. Walking past the graffiti we had the back of the house in our sights knowing full well there may be two disruptive teenagers hanging around somewhere.

As I figured they were smoking some dubious substance and didn’t appear startled to see us.

‘It’s fucking dangerous in there mate’, said one swaying around while trying not to fall, joint in one hand… lighter in the other.

‘Must be damn good stuff’, I was thinking with an inward smirk.

These lads just wanted to hang out, get off their heads, and keep out of the way of the general public. No big deal.

We told them we were Urban Explorers and danger is our forte. They seem less than interested, fumbling to light up more smokes.

Access was easy but required a climb through a glass infused window. Same shit as usual, just watch you don’t slash open your fingers. 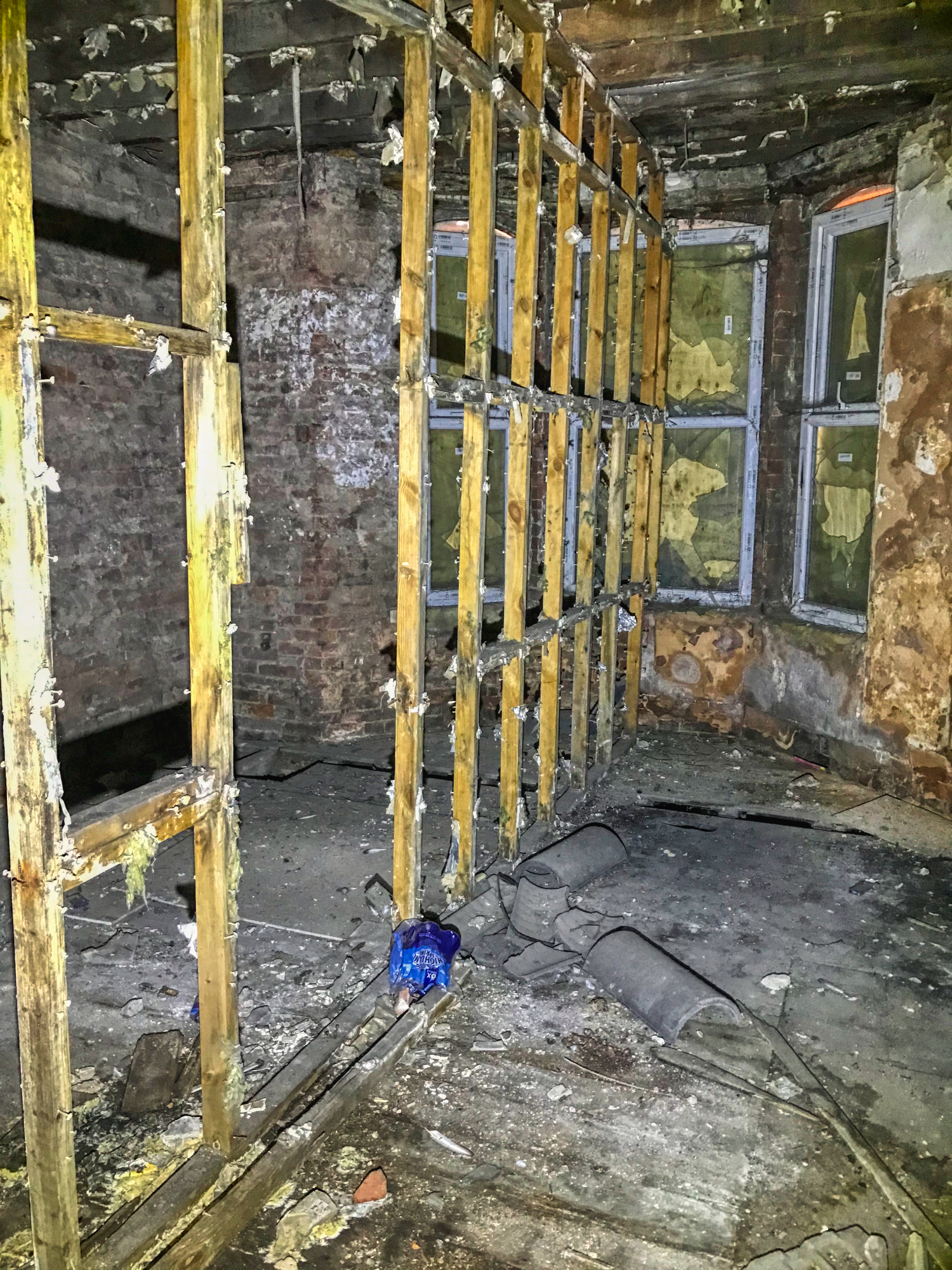 Inside was a little dull to be honest, with some evidence of refurbishment work infused with a ton of pigeon shit. 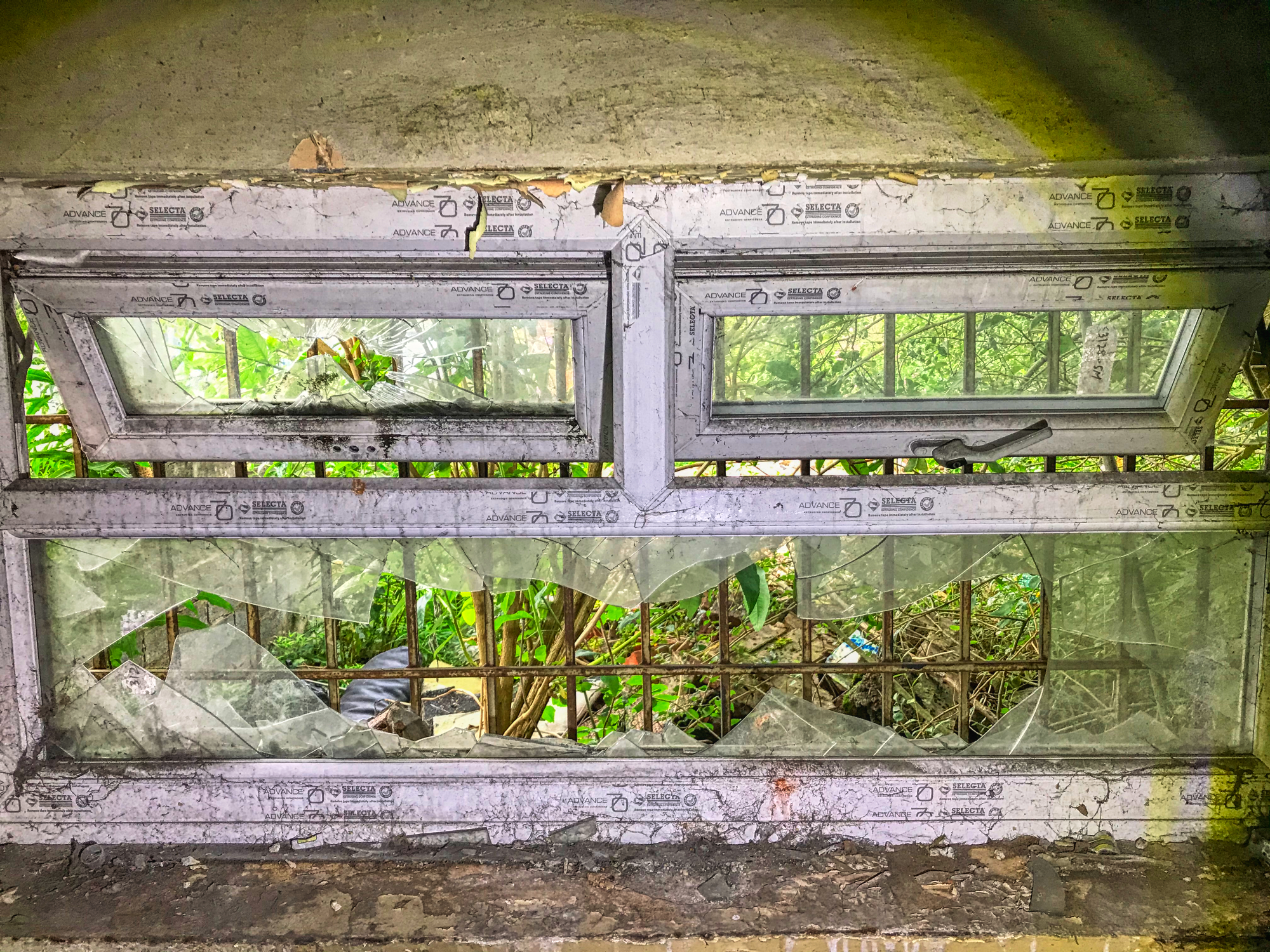 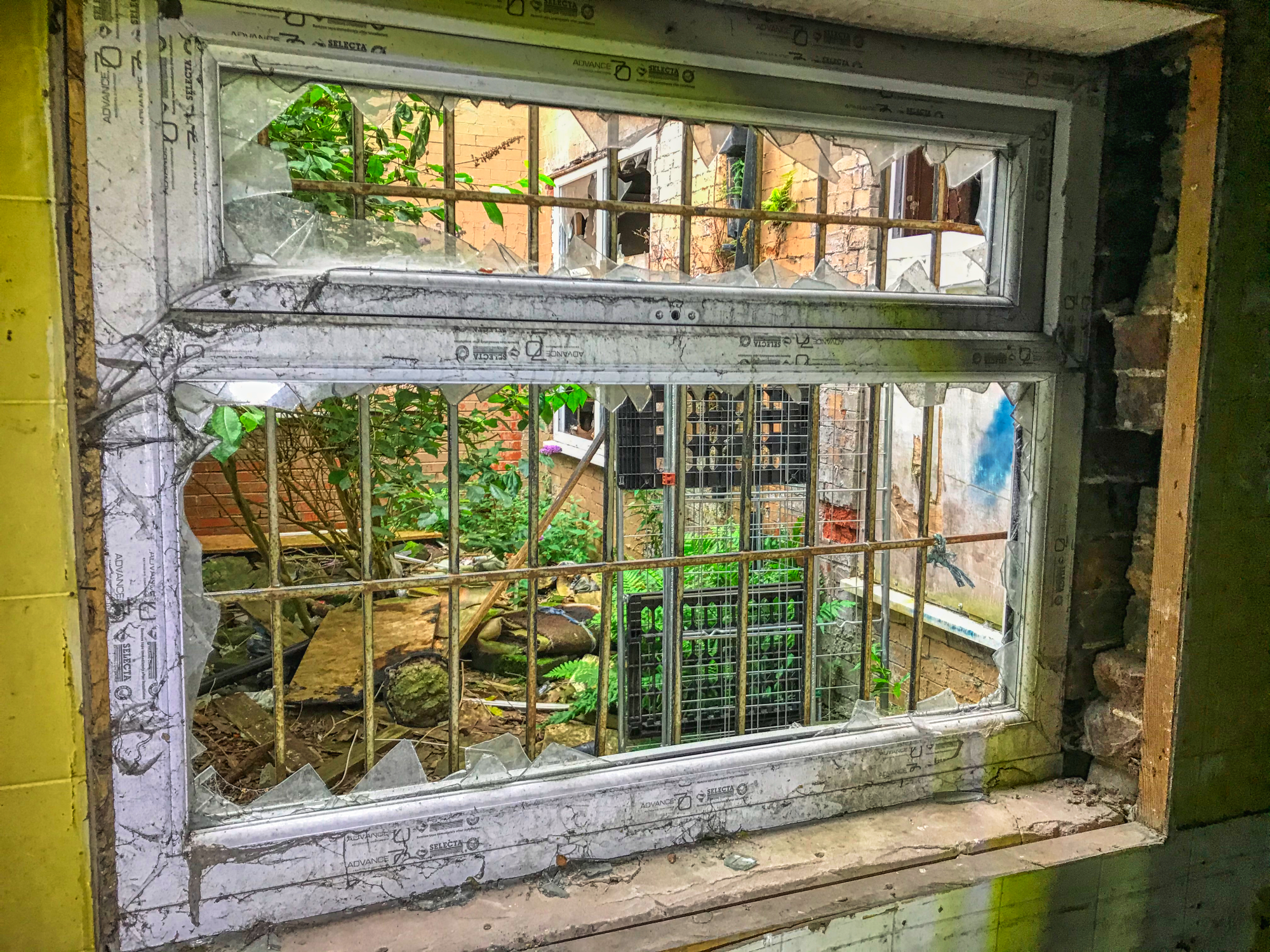 They had installed some double-glazing windows but left all the packaging stickers on them. 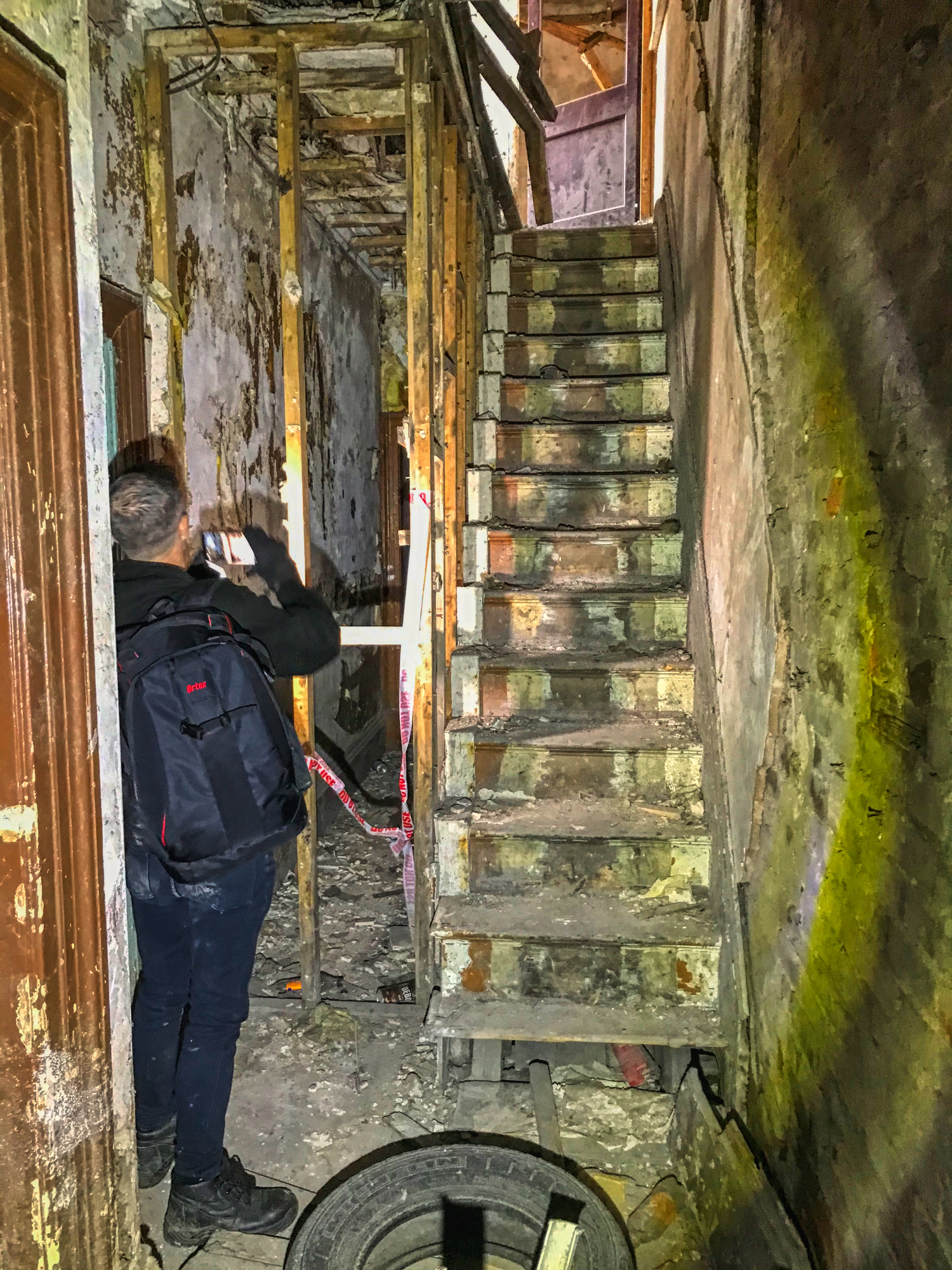 This was a decent-sized house and there were more than one set of steps. The other lot looked a little more stable. 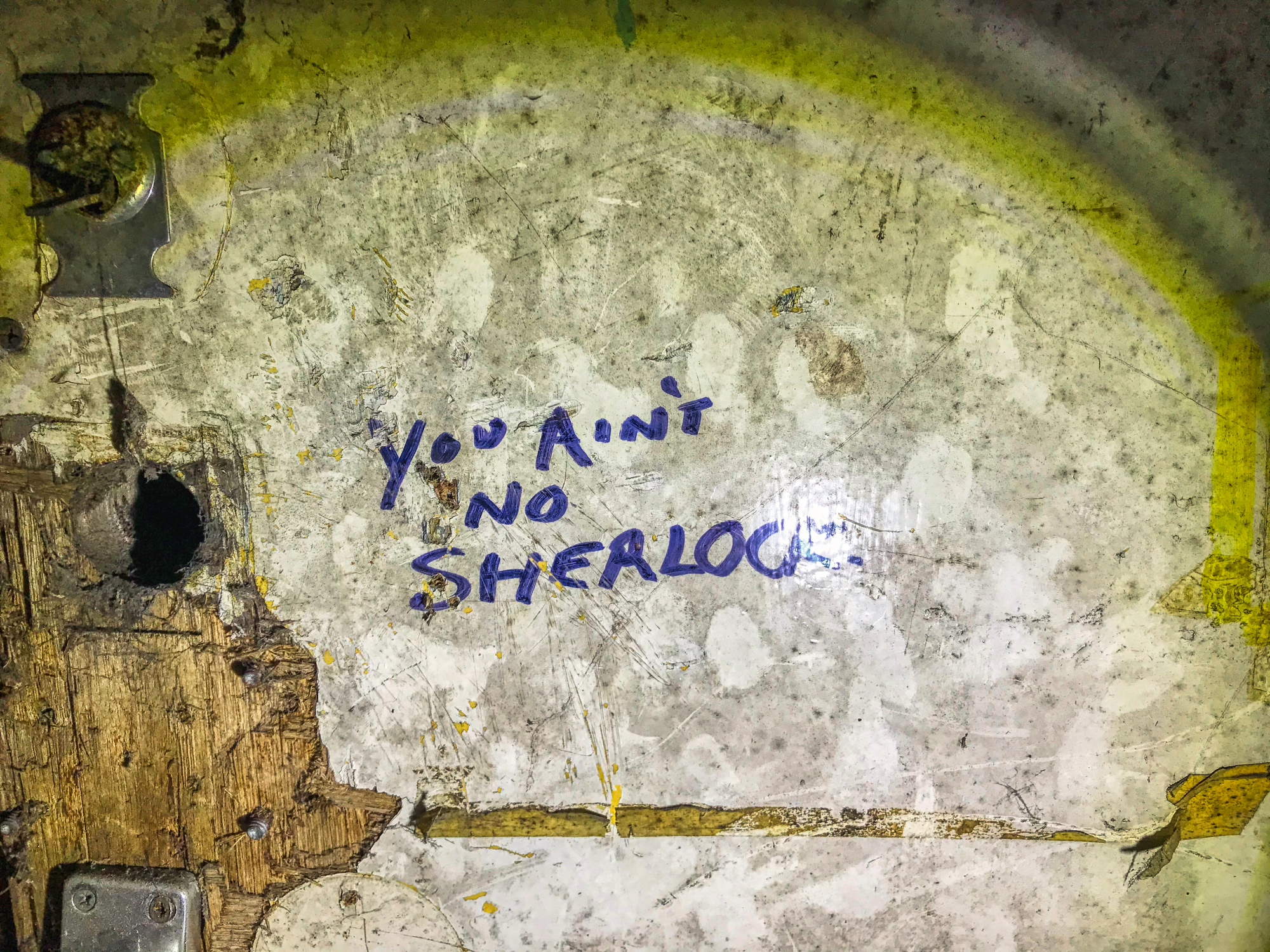 I went up the dodgy ones throwing caution to the wind. They were solid enough and my foot did not break through any of them. 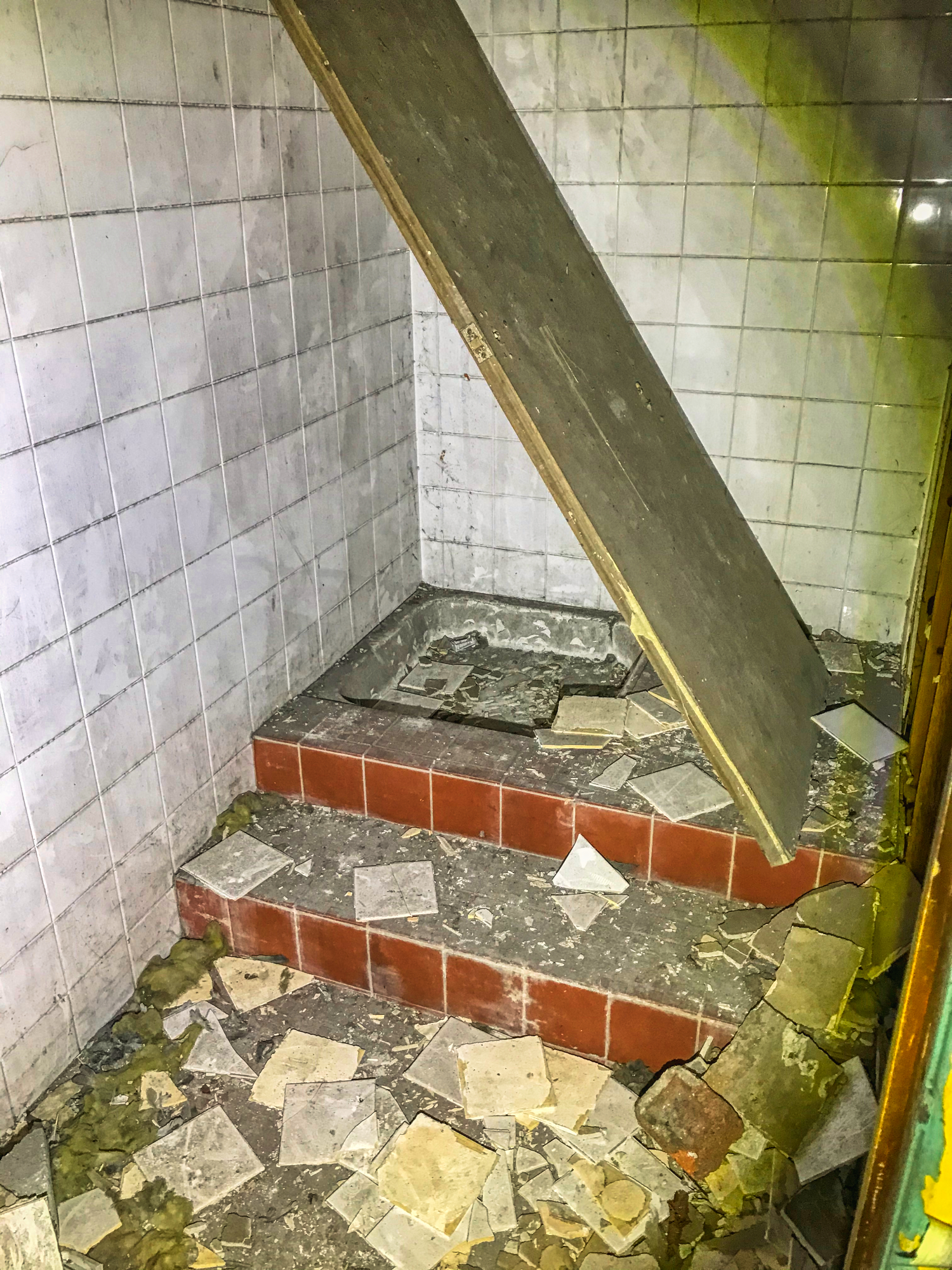 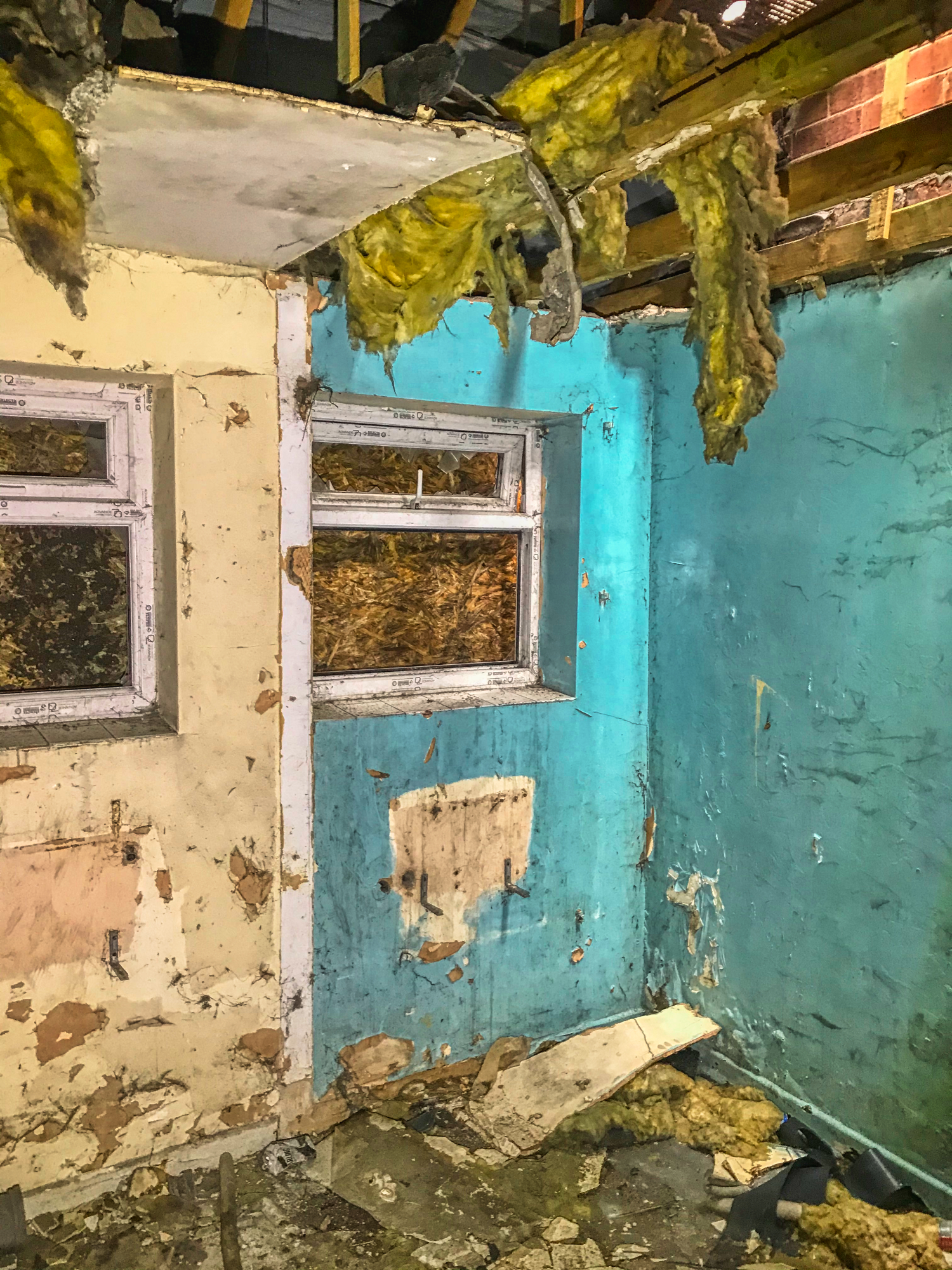 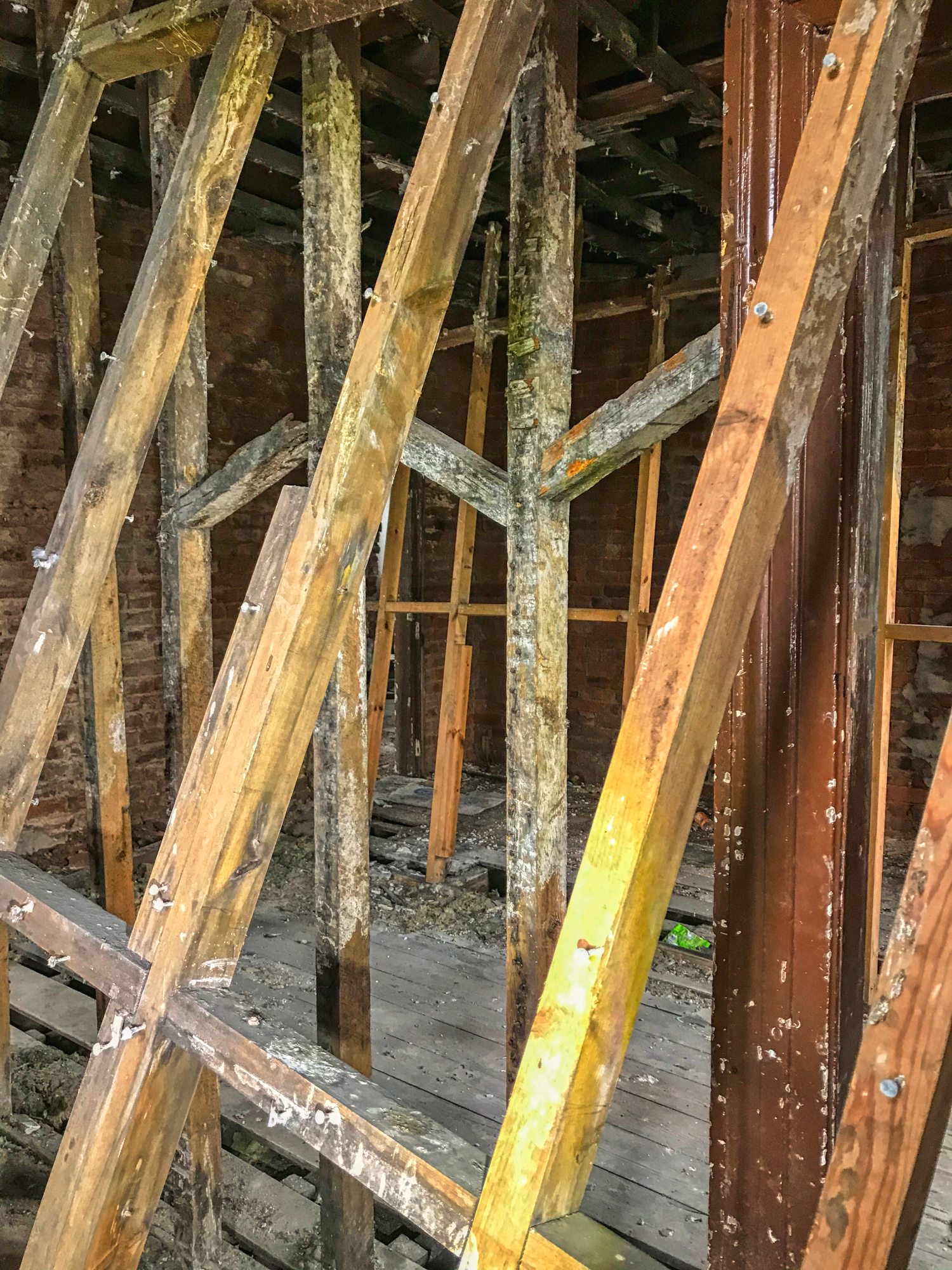 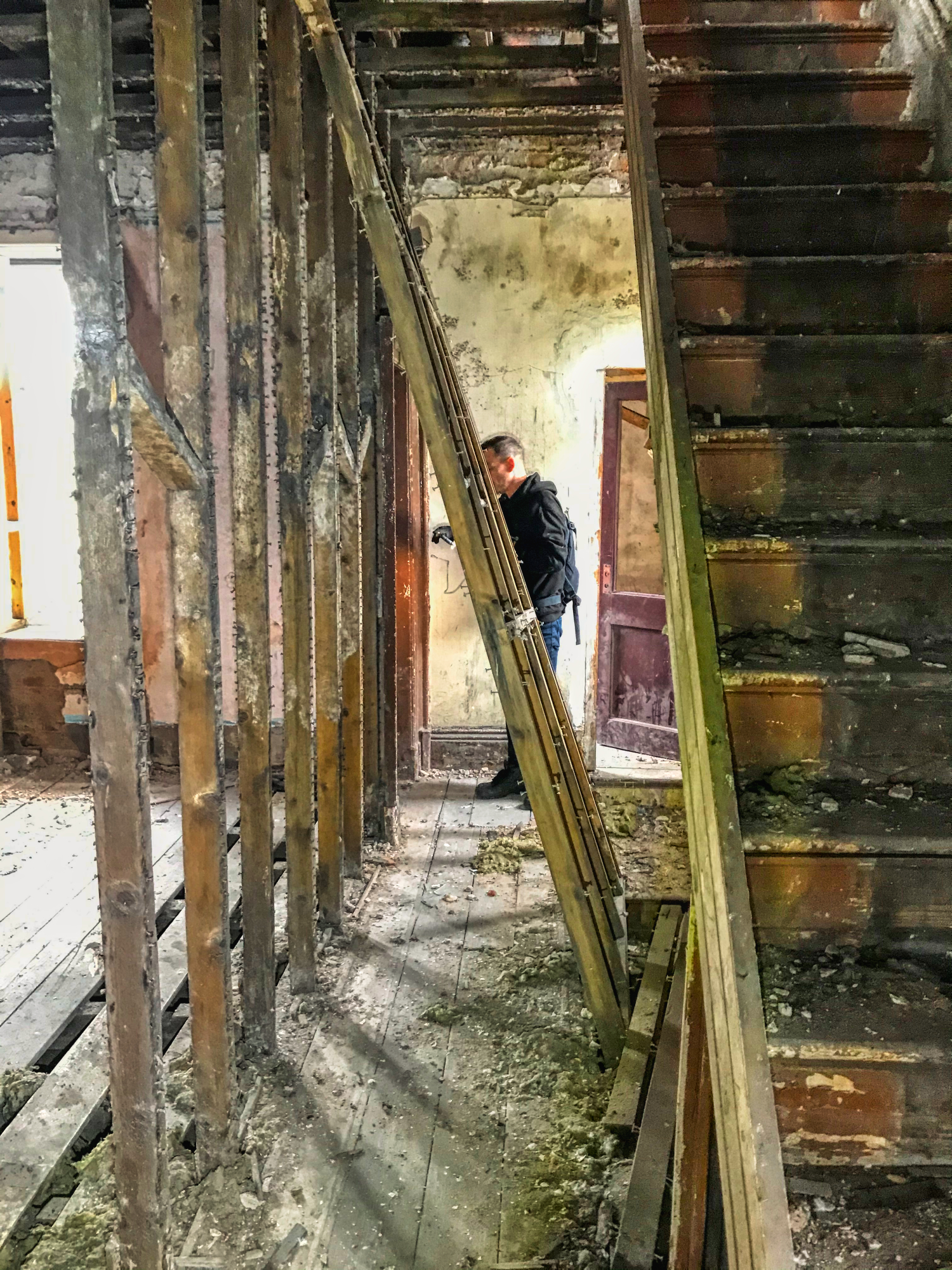 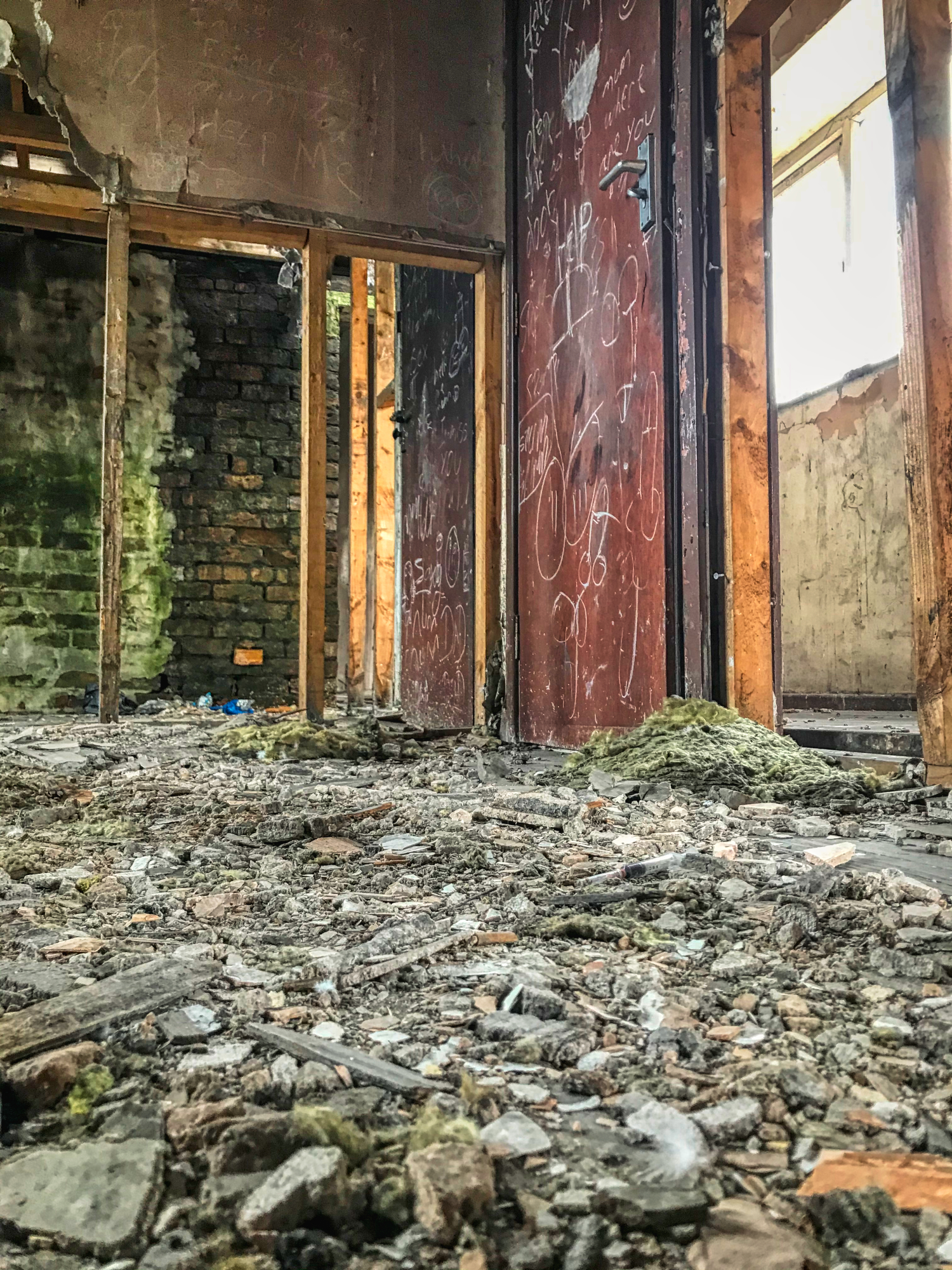 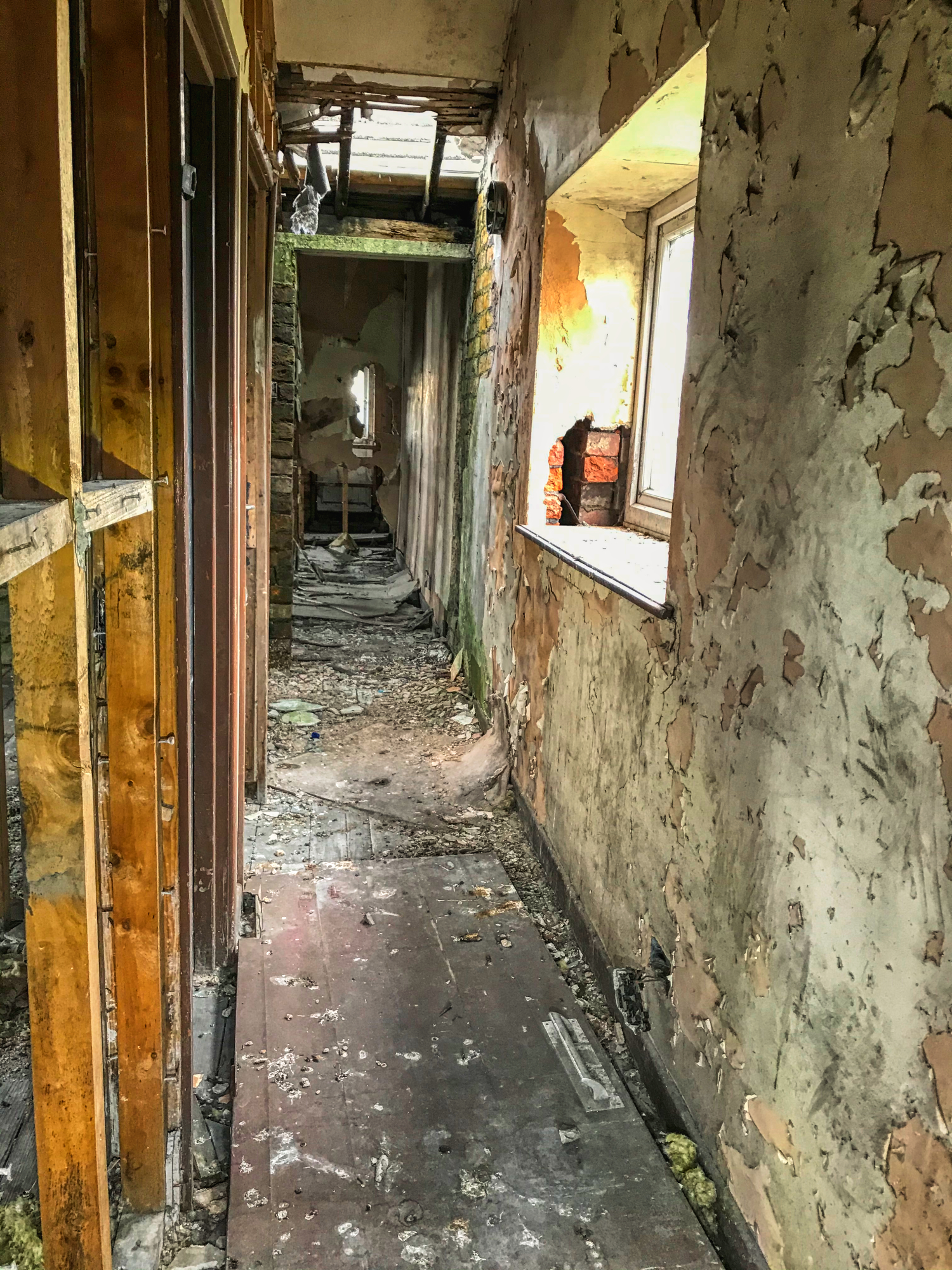 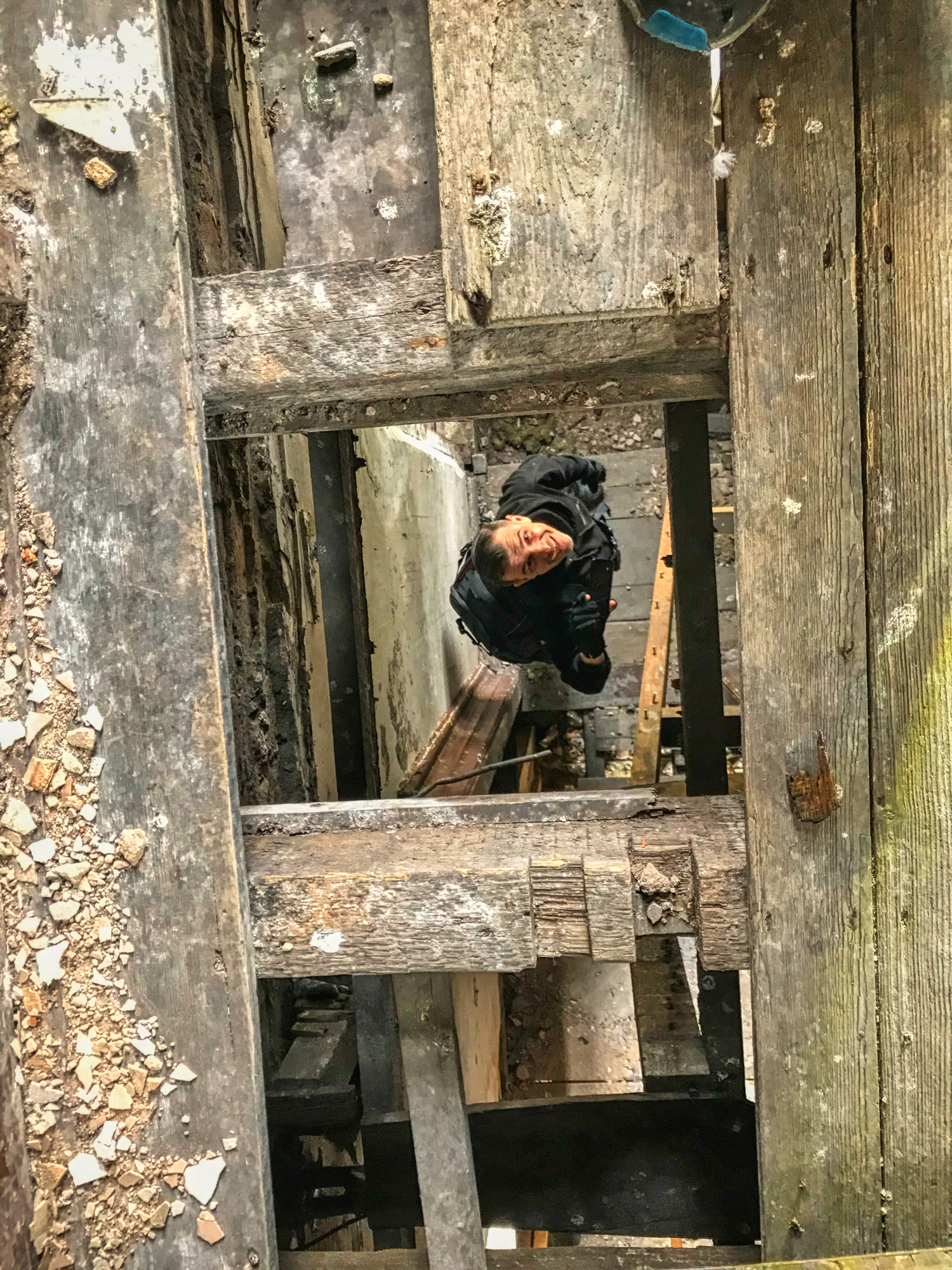 @dizzydiscovery refused to climb onto the top level and I waved hello to him through one of the many gaps in the floor. 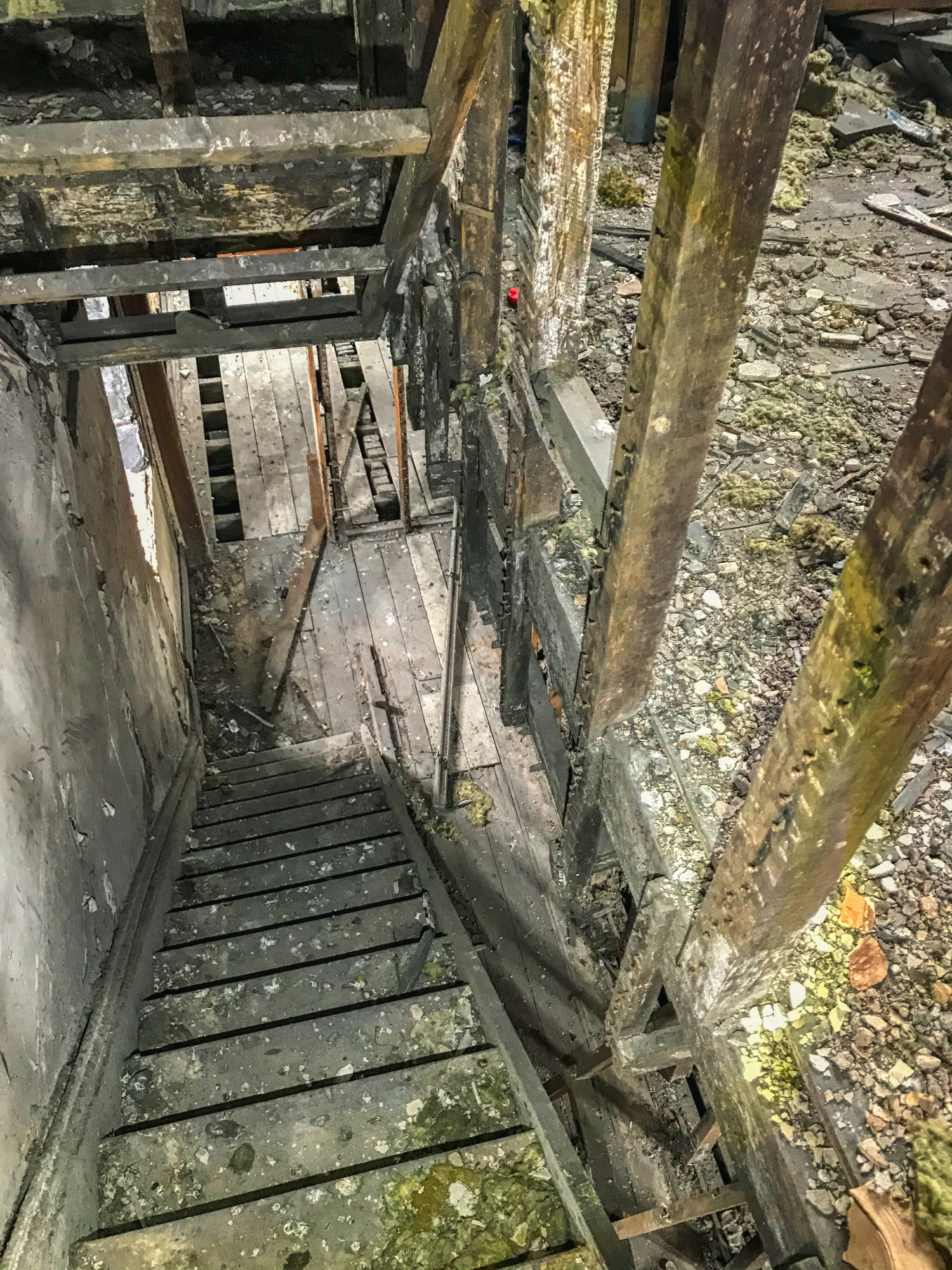 Finding anything interesting at all was hard work in ‘The Doss House’. It was a little ropey but I have been in a lot worse. 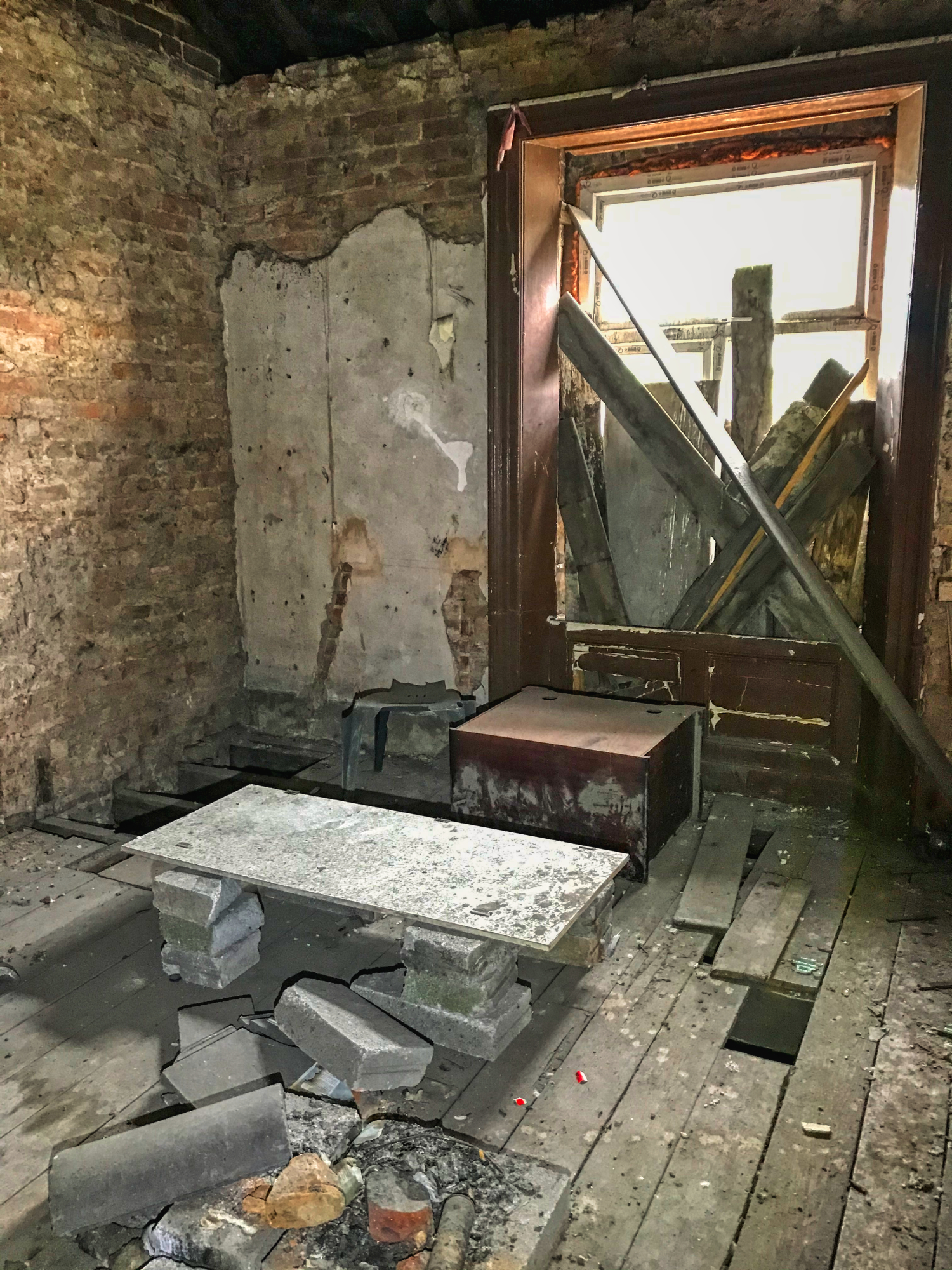 This table and makeshift chair could well be used for cutting the coke I suppose given a clean. 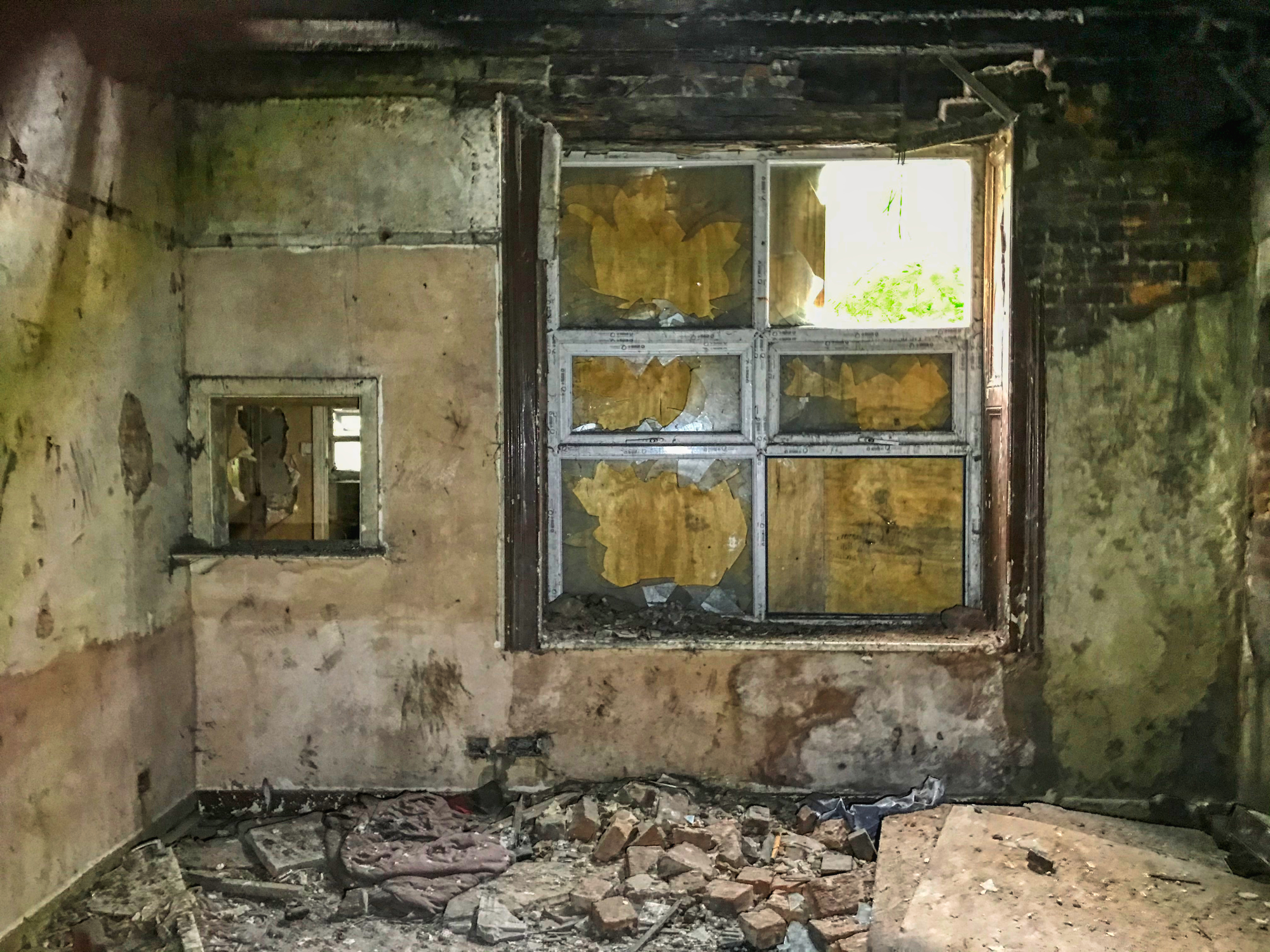 On leaving we noticed the lads had vanished. That was a quick session though they may have been quite noticeable while trying to walk down a public path in their state of ‘extremely stoned’. 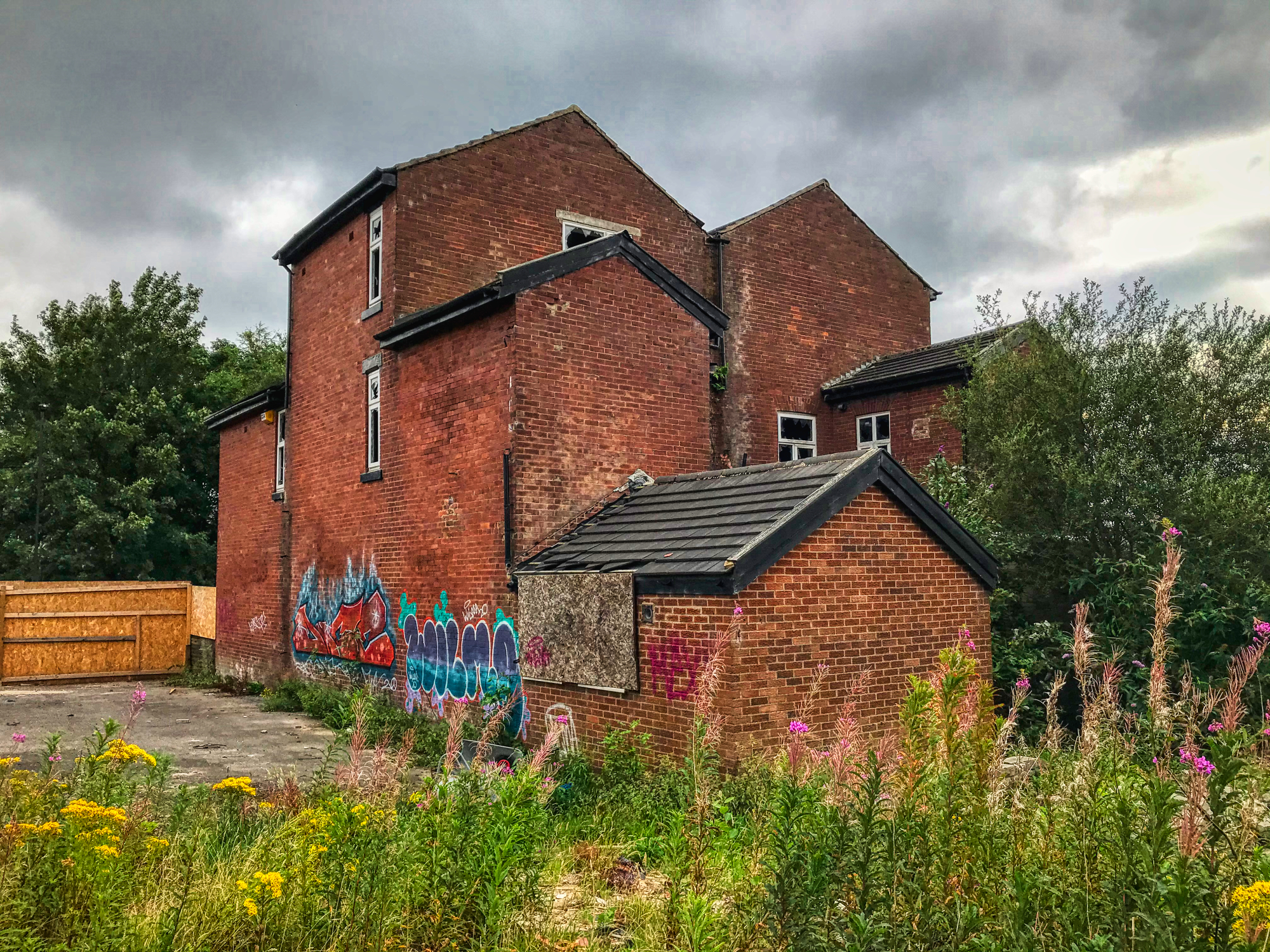 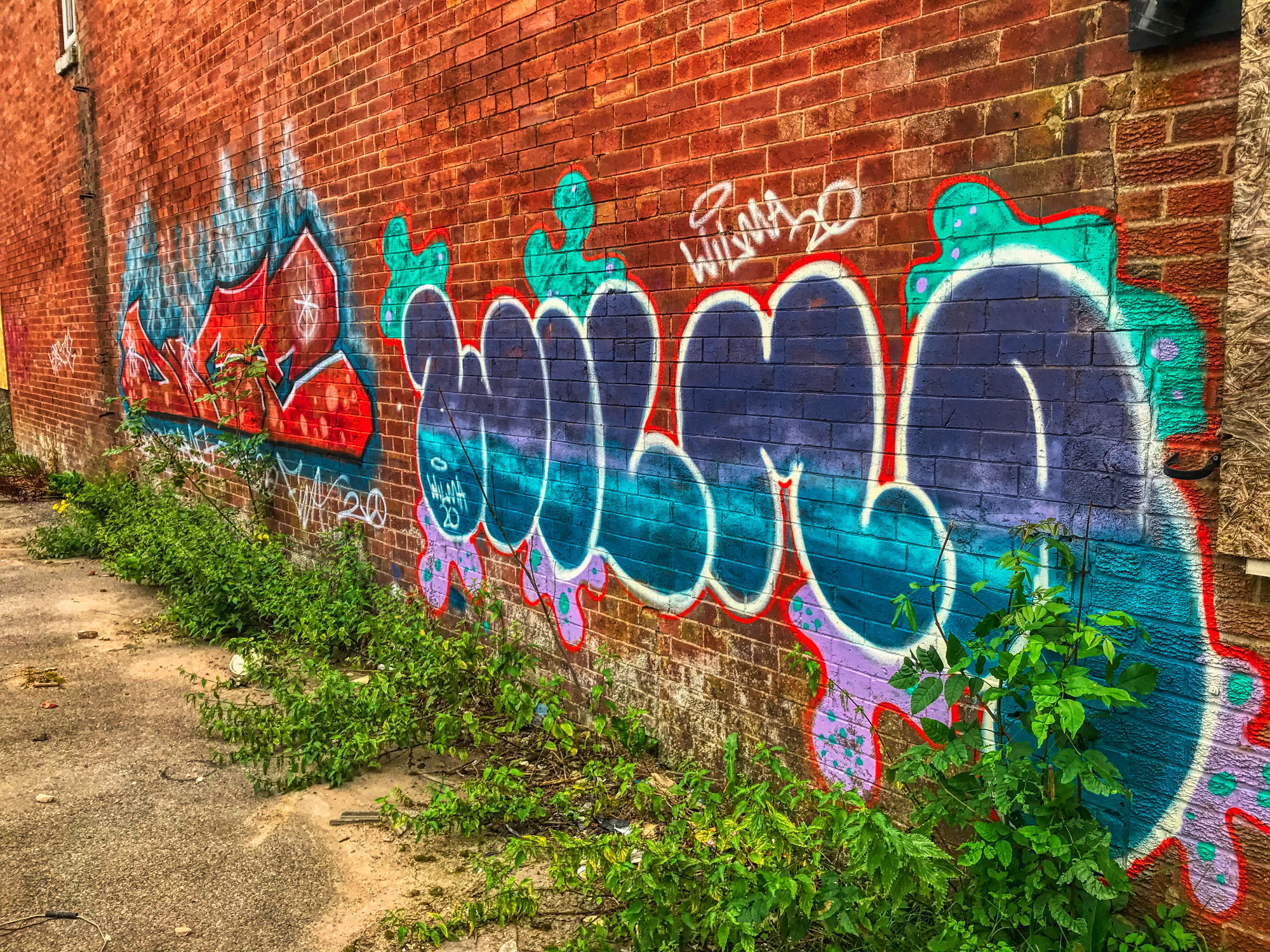 As for the house, well it was pretty damn shit as far as the explore was concerned. Just as well it was an ad-hoc one and not planned.

@rodent
about 2 years ago

I like the exterior of the building. The front makes me want to see a little duplex, but then that side complexity I don't know what would actually be best.

It was more of a business zone and quite central in a large town. I figure it was a business once and would be surprised if it was ex-residential. There are other properties nearby, intact ones and not like this.

With so much of the inner walls missing, was someone gutting it to restore it?

I have seen it before., they start and then the cash runs out. Could be one of those again.

@bozz
about 2 years ago

Bummer, this one looks pretty lame. I can't believe how few windows there are in it. It would have been a pretty dreary house if that is what it originally was. Especially on the back side. Not much natural light there!

this one looks pretty lame.

Had to get it out of the way for the better stuff to come.., yeah a little crap inside. You never can tell from the outside.

Now THAT’S What I Call A Shithole

Maybe not much to see but the journey was enjoyed..

It's always fun when you meet someone else, not that it happens much. They are usually other explorers (very rare) or druggies (rare).

@steevc
about 2 years ago

You'd have to be desperate to 'doss' there. I bet it doesn't even have room service.

No old sleeping bags in this one, I see them very often... it's like they are disposable or something! These people are homeless but can get free sleeping bags from somewhere or other.

@steevc
about 2 years ago

Pah! They are obviously loaded and choose to sleep in shitholes.

Thanks for sharing the history lesson, @slobberchops. Long ago skilled workers constructed this dwelling to keep people and pets comfortable, for centuries to come. Modern man's legacy and "superior intellect", is looking bleak.

Maybe not so long ago.., the building looks relatively new.

Hiya, @lizanomadsoul here, just swinging by to let you know that this post made it into our Honorable Mentions in Daily Travel Digest #1083.

@grindle
about 2 years ago

On to more interesting ones in the next episode..

@grindle
about 2 years ago