“What’s that… with no roof in those woods”, I asked @anidiotexplores.

We were looking for an old derp named quite inappropriately, "The Shag Pad" by another explorer and were using Google Maps with it's Satellite view. 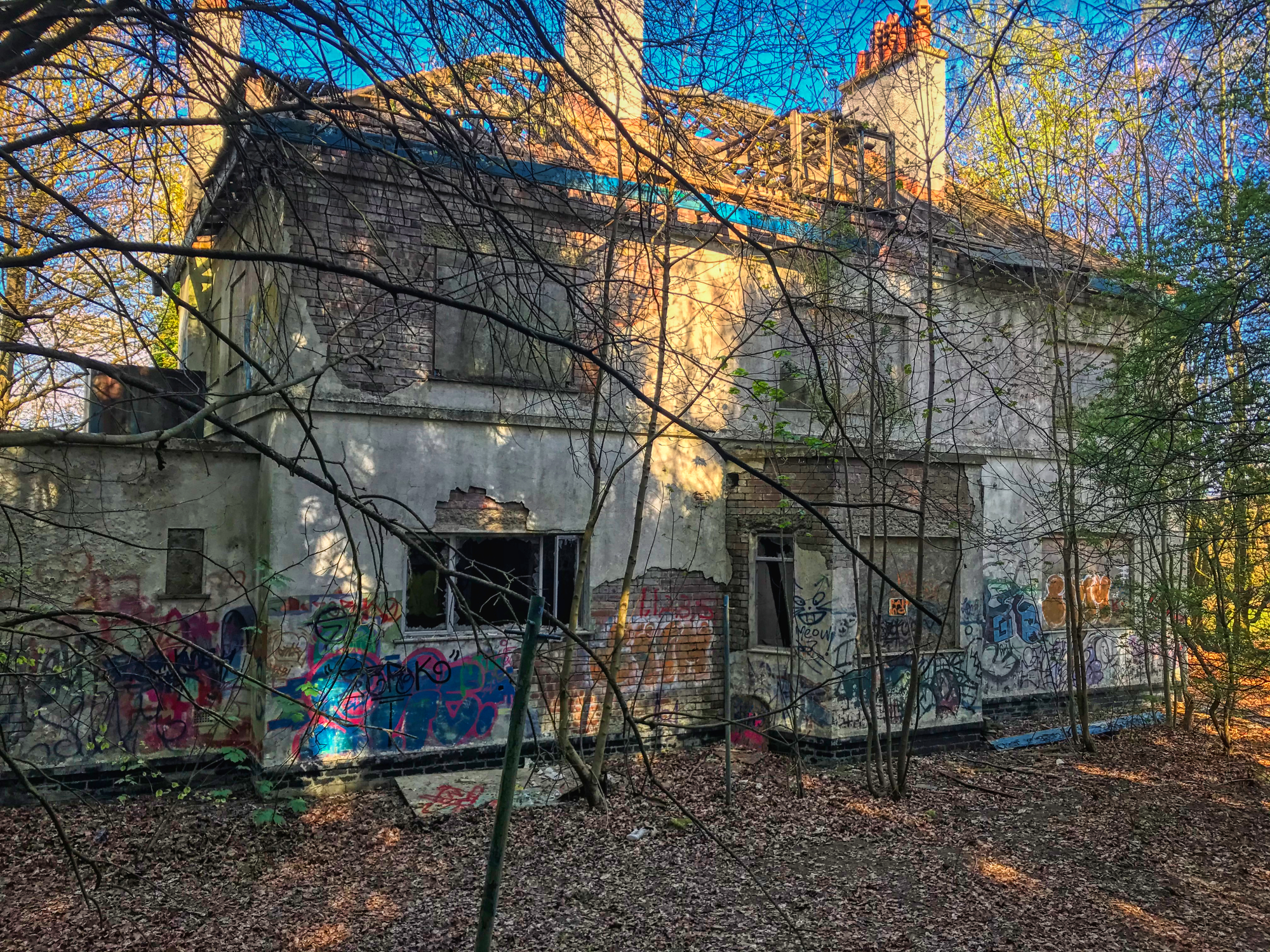 It didn’t look anything special but as we were planning to do a mammoth full-day in the area it needed to be checked out.

It did look like our target and was probably dropping to bits. An old gatehouse or lodge perhaps as nearby was one of those stately homes lived in by the affluent. 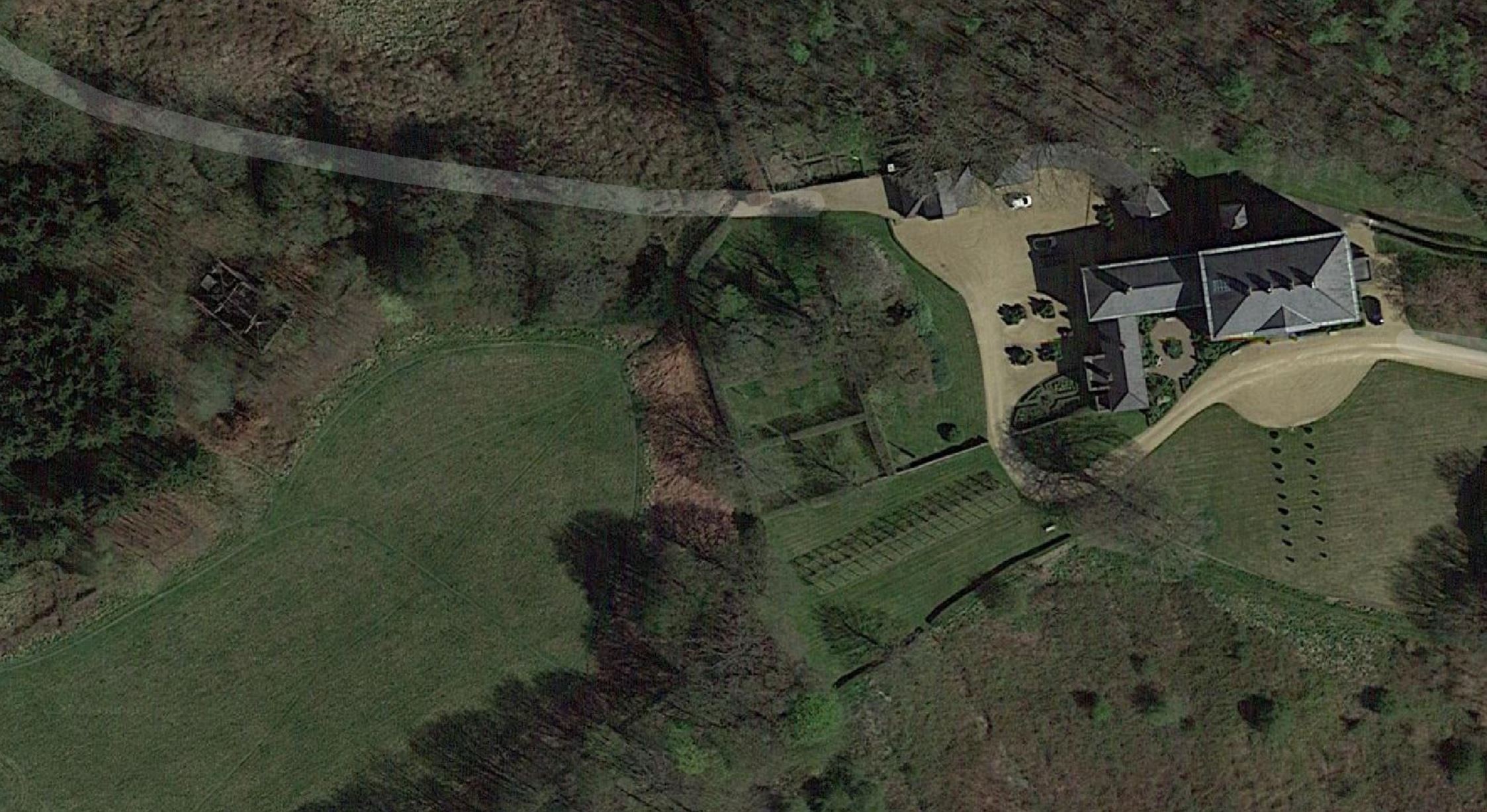 I could see the old road was no longer used and those posh people had another way into their residence.

Still, we would have to be careful as they always have some dogs; dogs, with their ears capable of hearing the likes of us crashing through the undergrowth from the west. Dogs are a bane to explorers.

One of the bad things about summer exploring is the substantial amounts of vegetation you have to stand on to get anywhere. 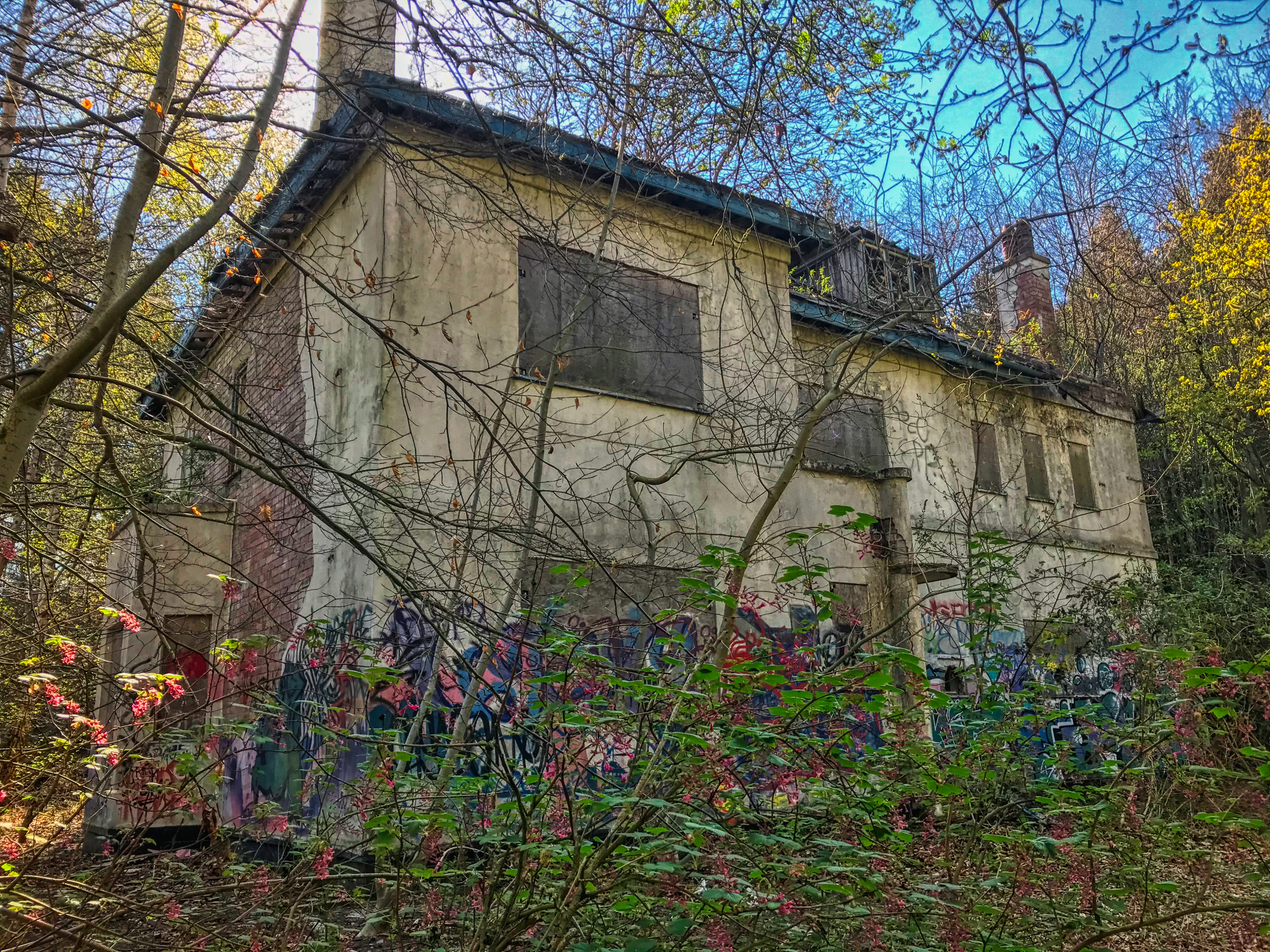 This one was no exception and I was grateful to see emerging in the distance an old rotting house appearing before my eyes.

“No problem accessing this one”, came into my thoughts as I brushed away another tree branch intent on poking my eye out.

It looked like a detached council house in the middle of a forest. How weird?

Even if it was dropping apart I could see a lot of graffiti everywhere. They had gone to town on this one. 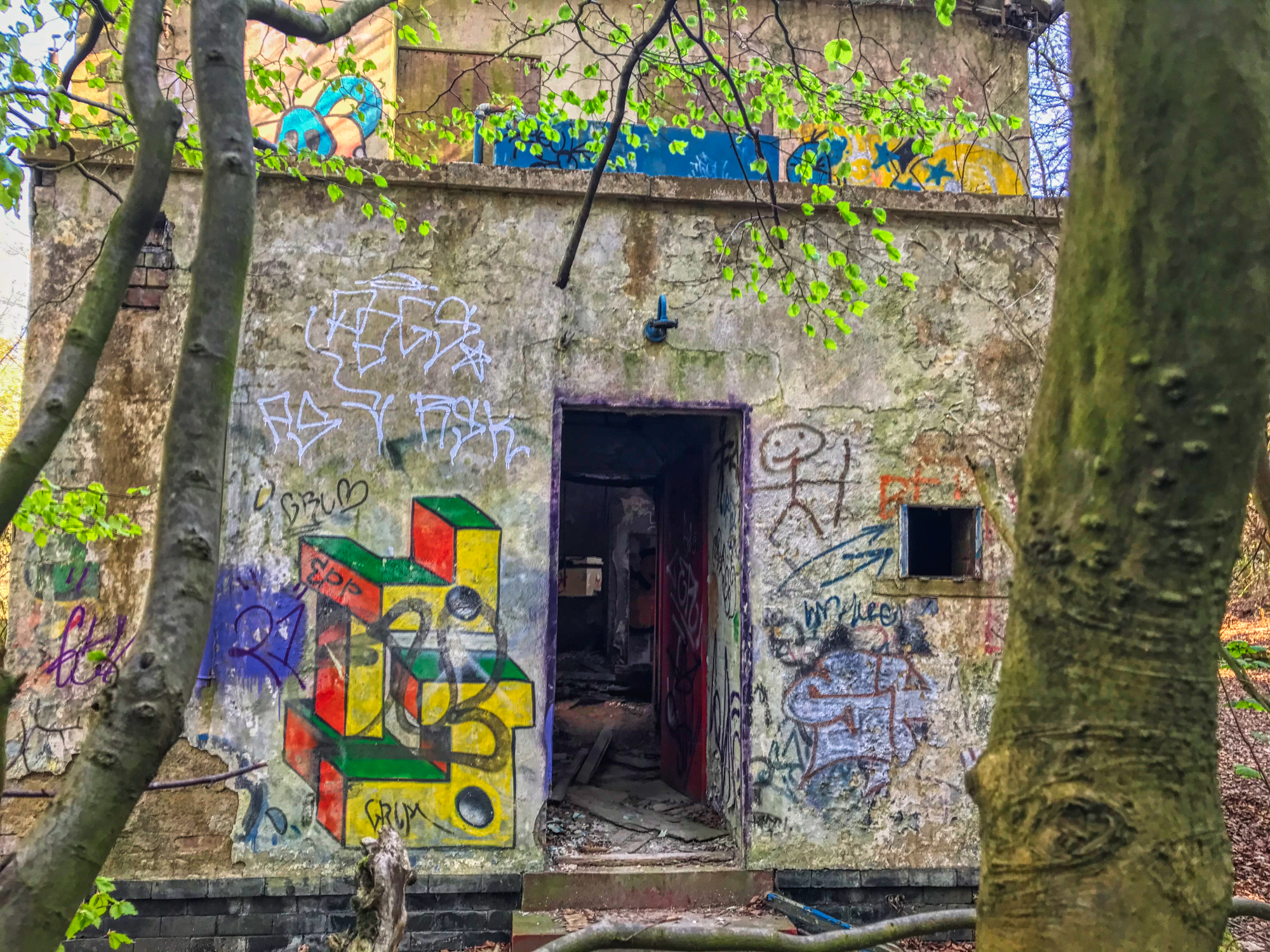 Would we have to climb through a window? No need if the door is… erm gone. 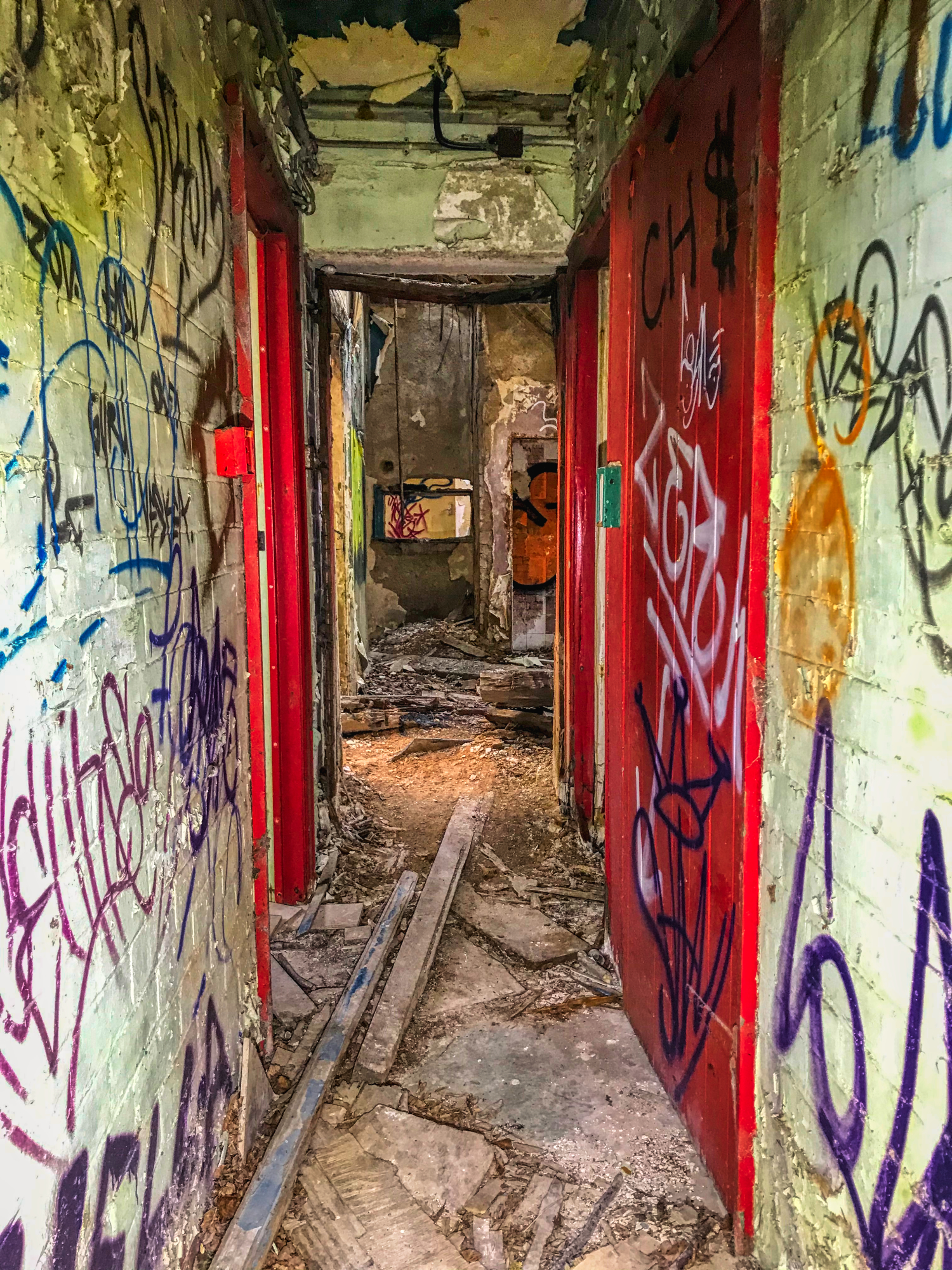 I wondered just how many scribblers had been here. Was it many or just a few that had brought twenty cans of spray paint each? 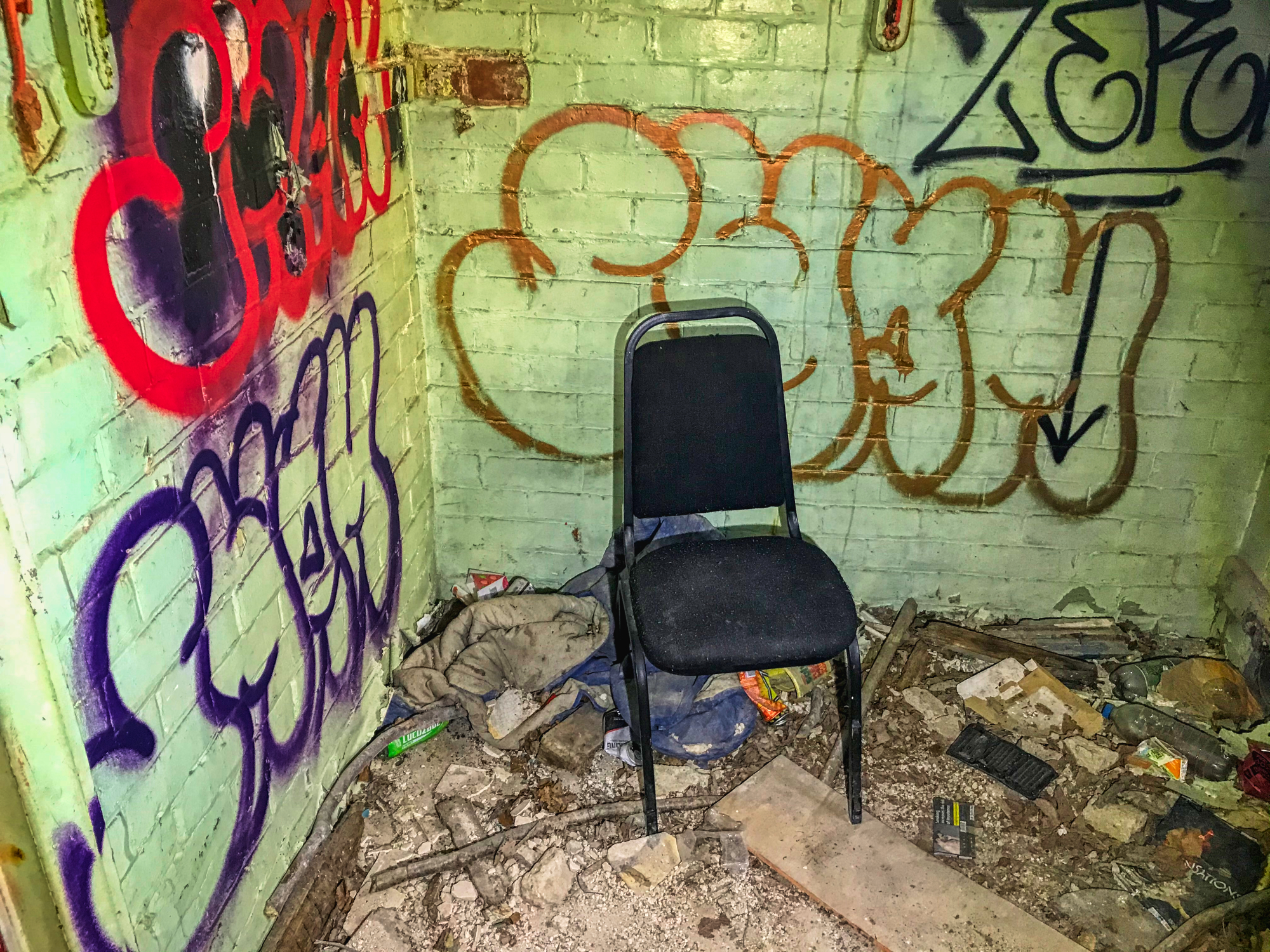 The chair looked out of place. Had it been brought here with purpose? I inspected it and found no signs of blood, hair, or decapitated limbs.

The mansion was not far away, screams could well be heard easily, and there was no doubt they had dogs. 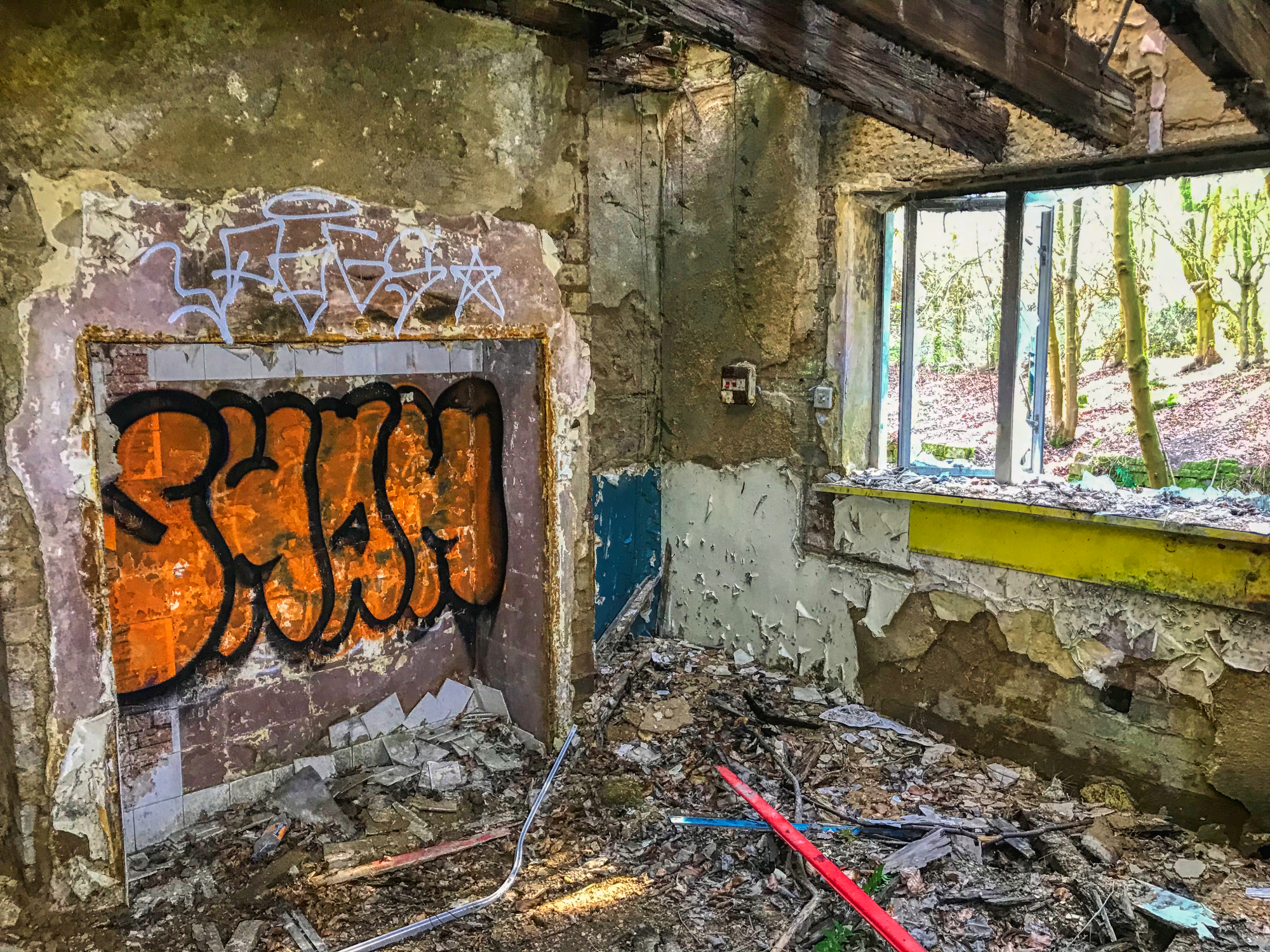 The house was a typical derp and so badly decomposed that upstairs was not going to be an option today. 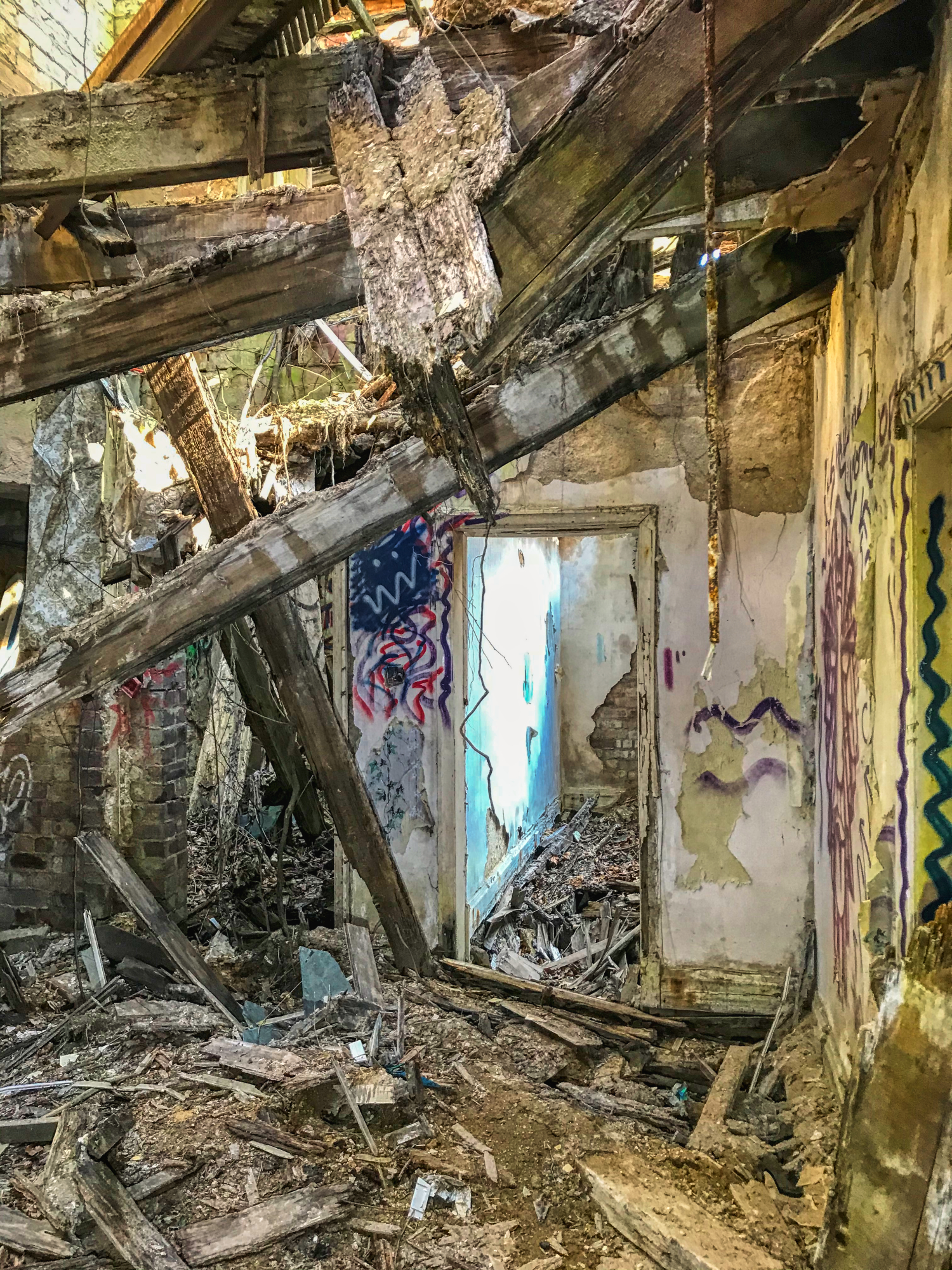 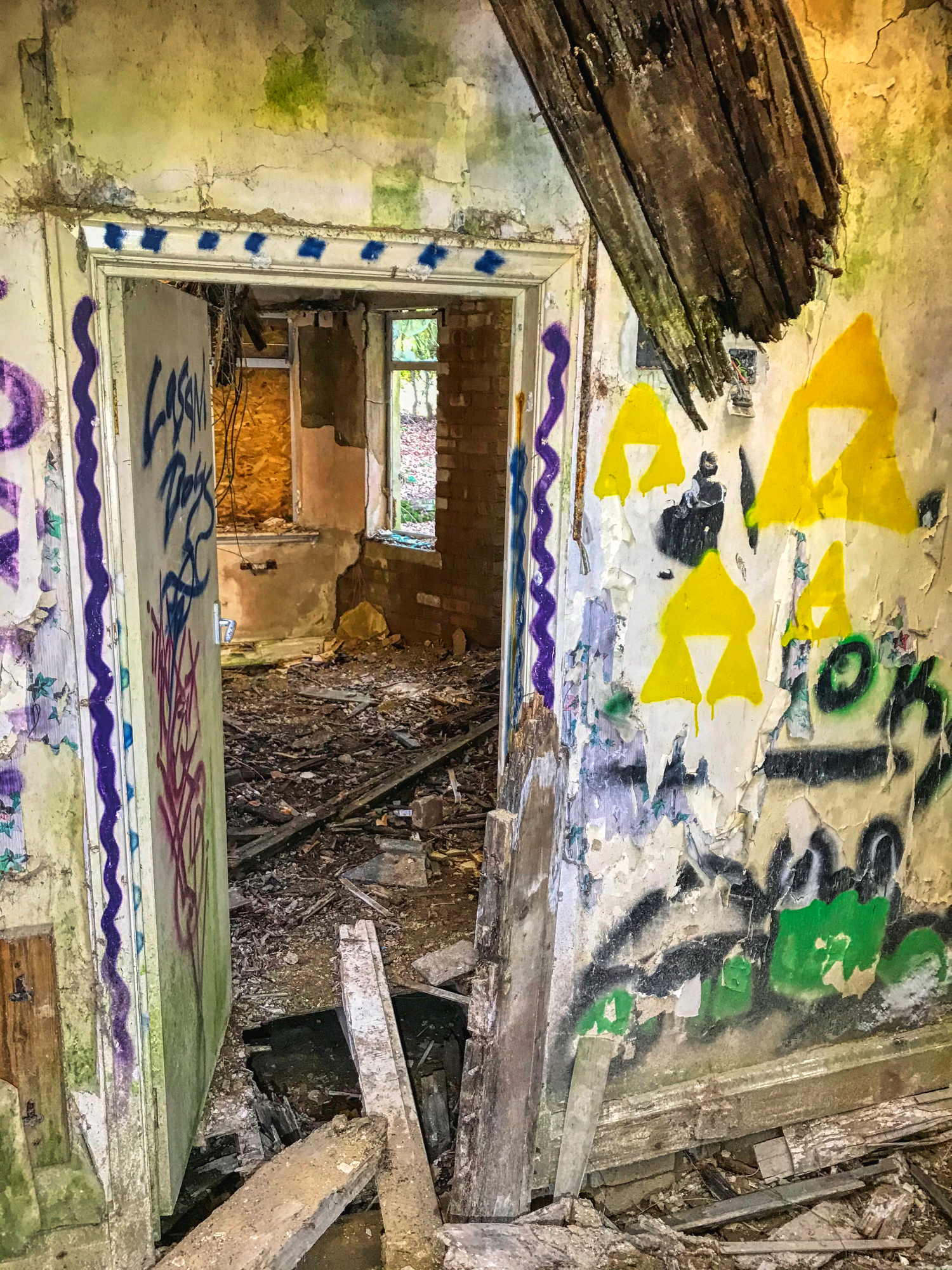 The décor could grow on me; don’t you think the wavy purple etching is catchy? 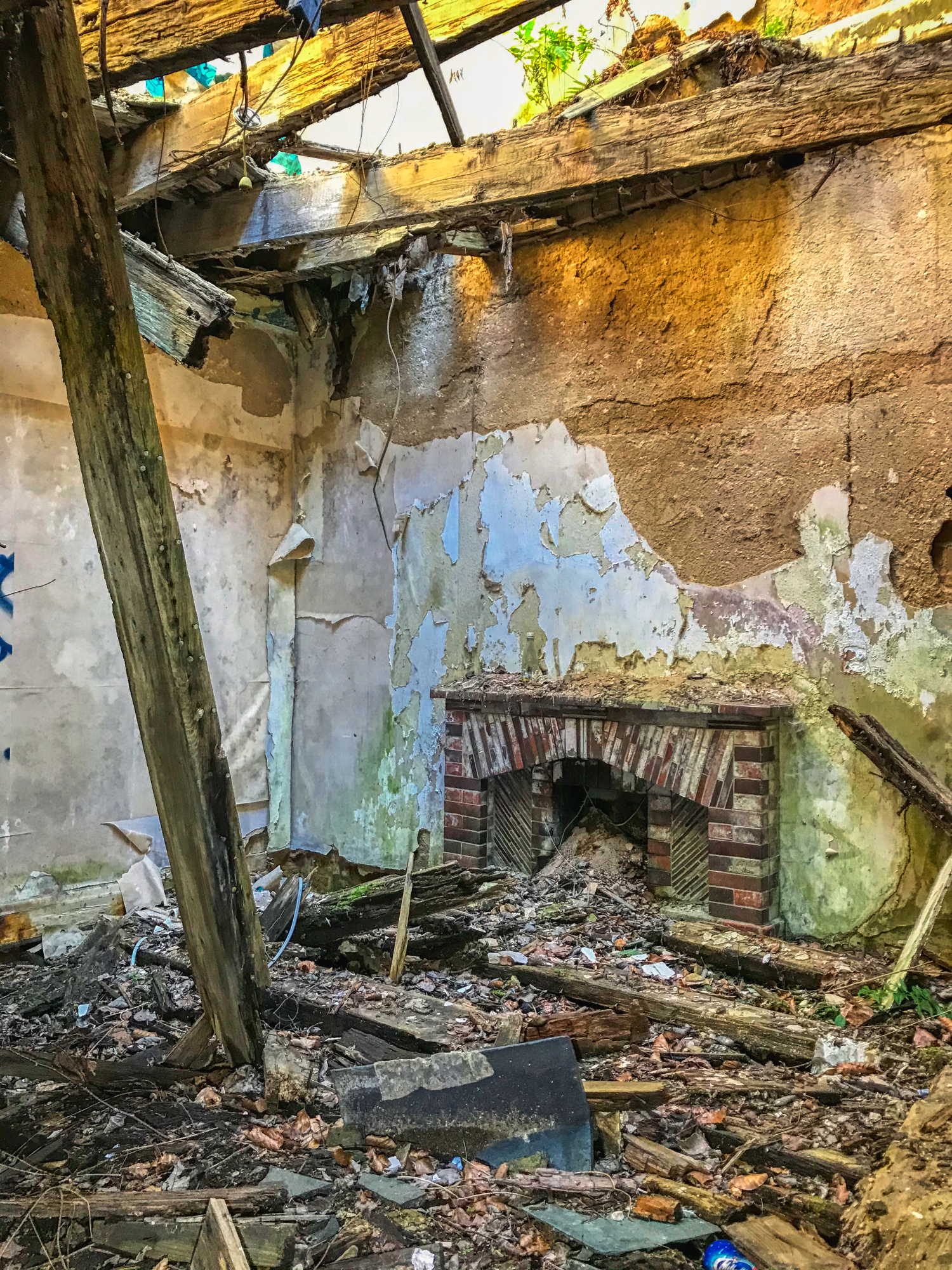 That’s a very sixties type old fireplace from the days when we had to add coal and clean the things out daily. 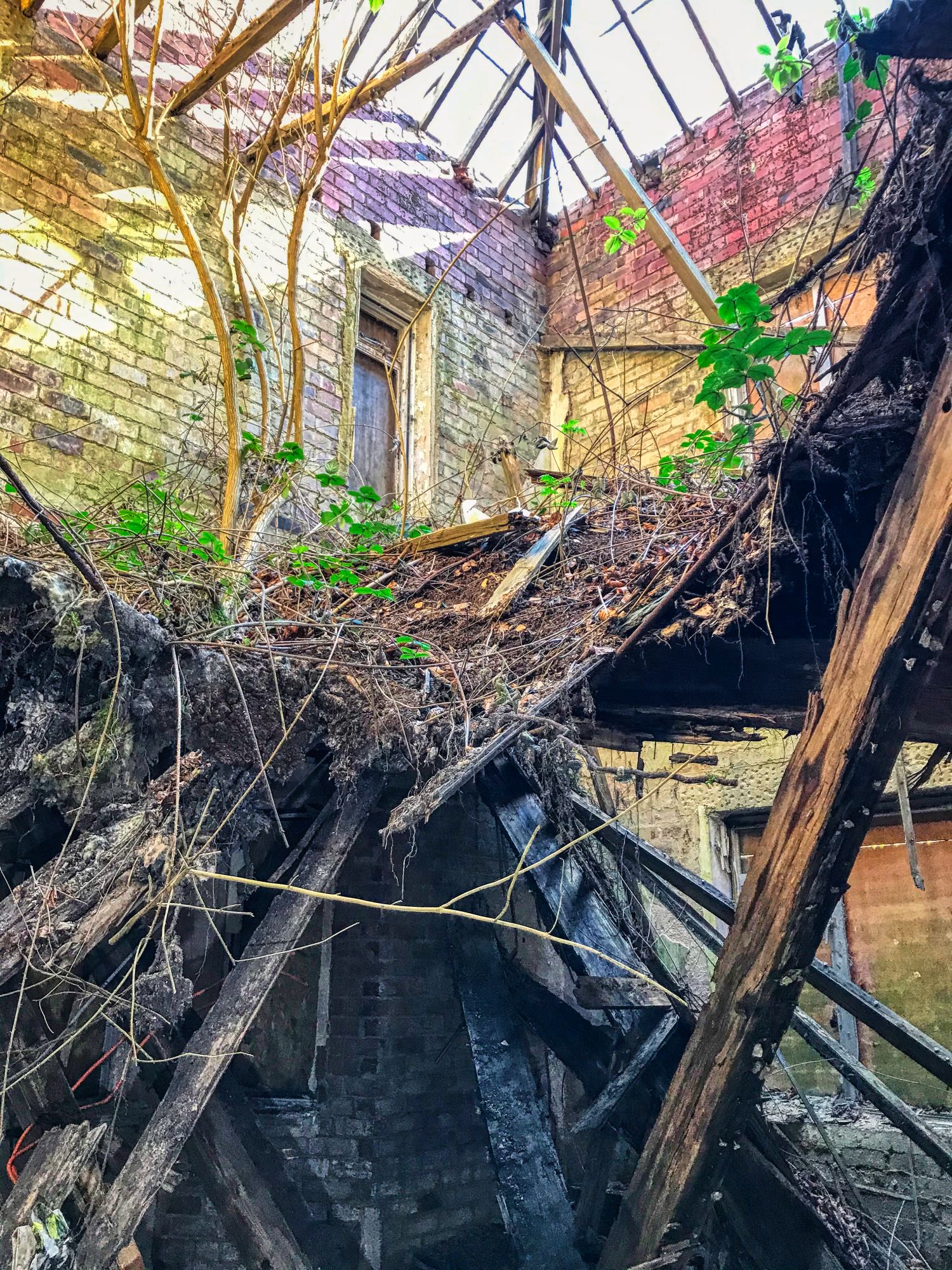 @anidiotexplores tried to get beyond all this into a far room but dislodged the balanced masonry which wobbled violently and threatened to bury him alive. He backed off and gave it a miss.

Not to be discouraged I threaded my body through the fallen beams, and into the other room. 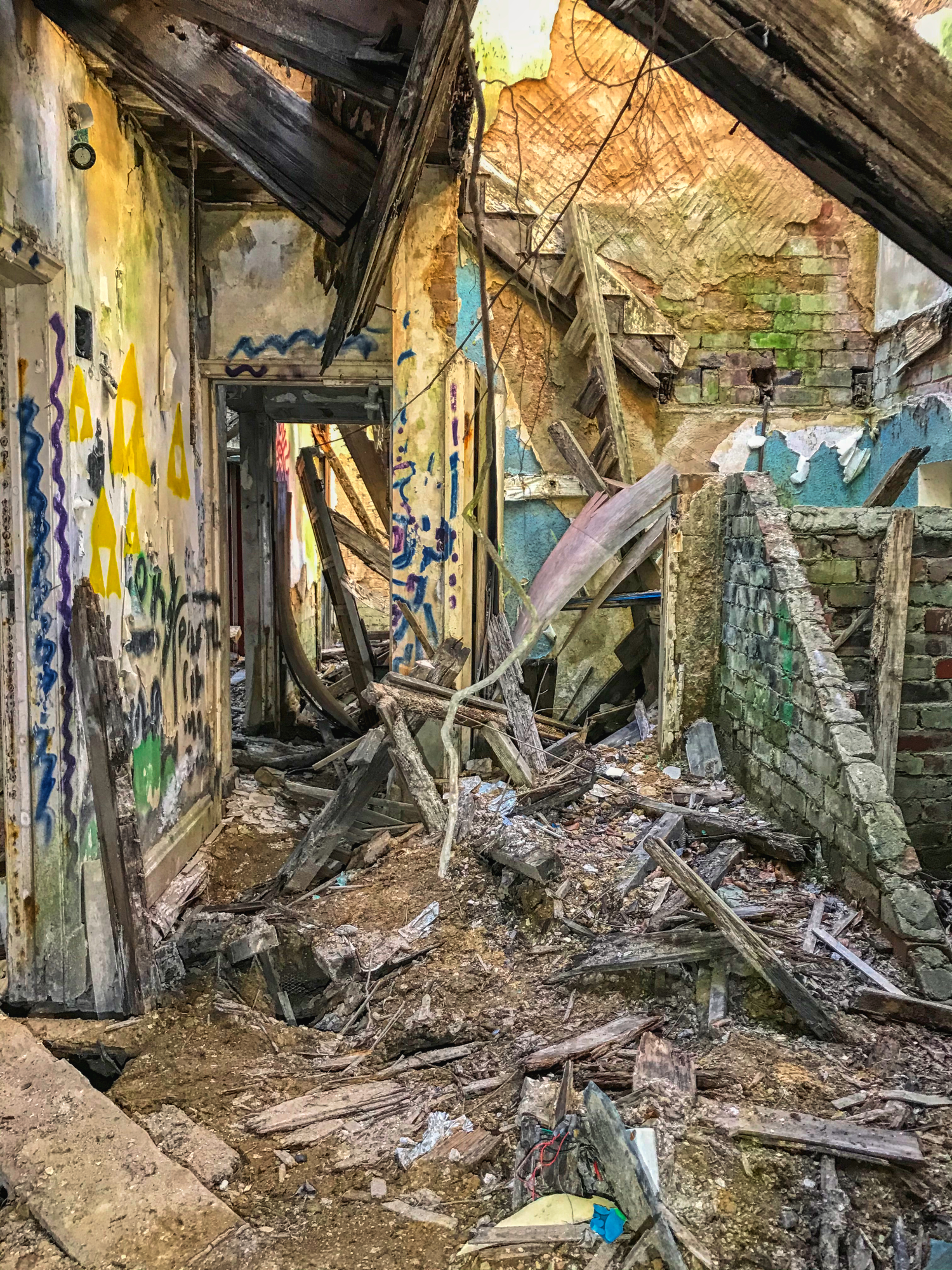 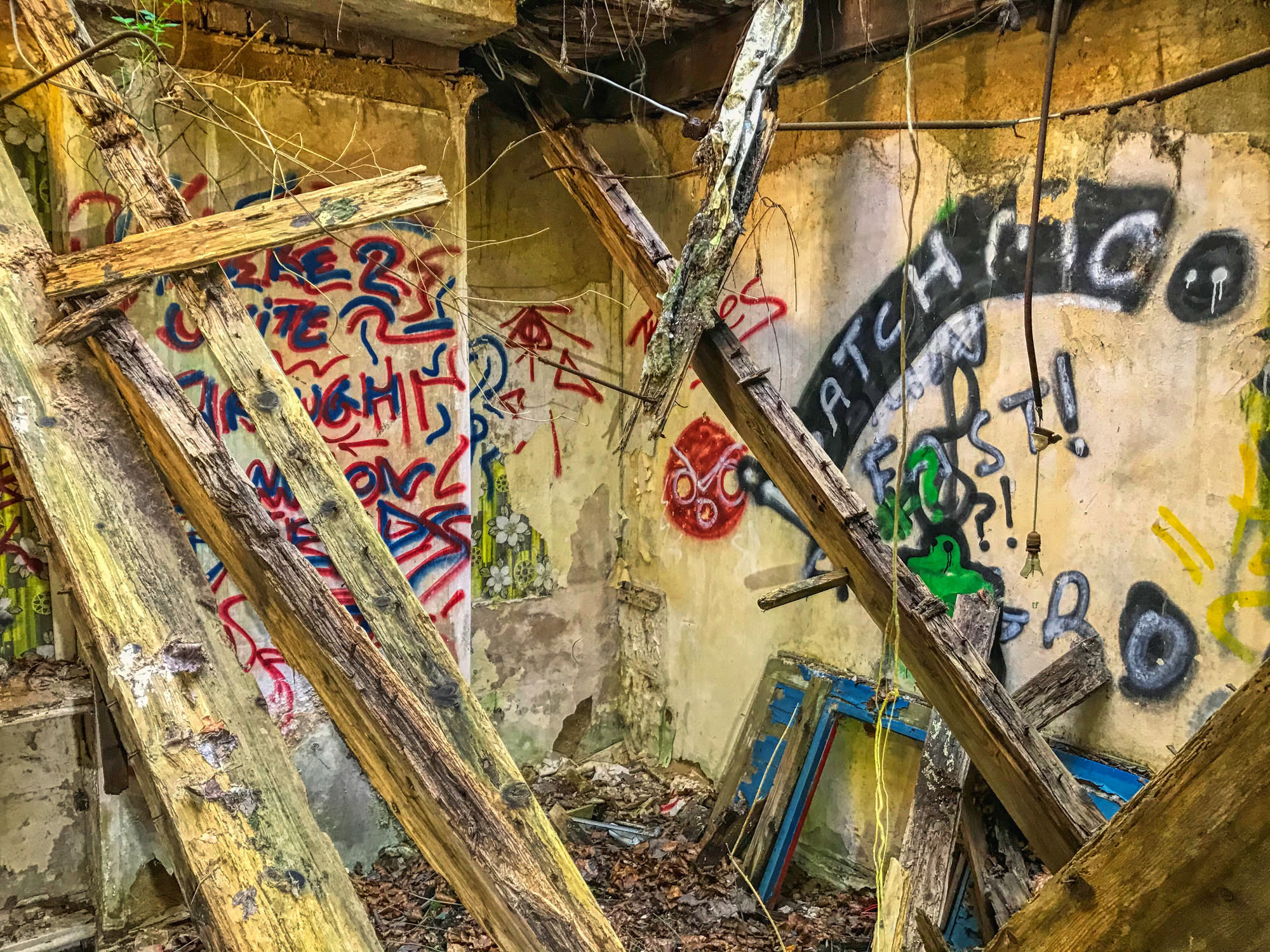 The reward was hardly worth it. More scribbles on the wall, albeit in a different style. 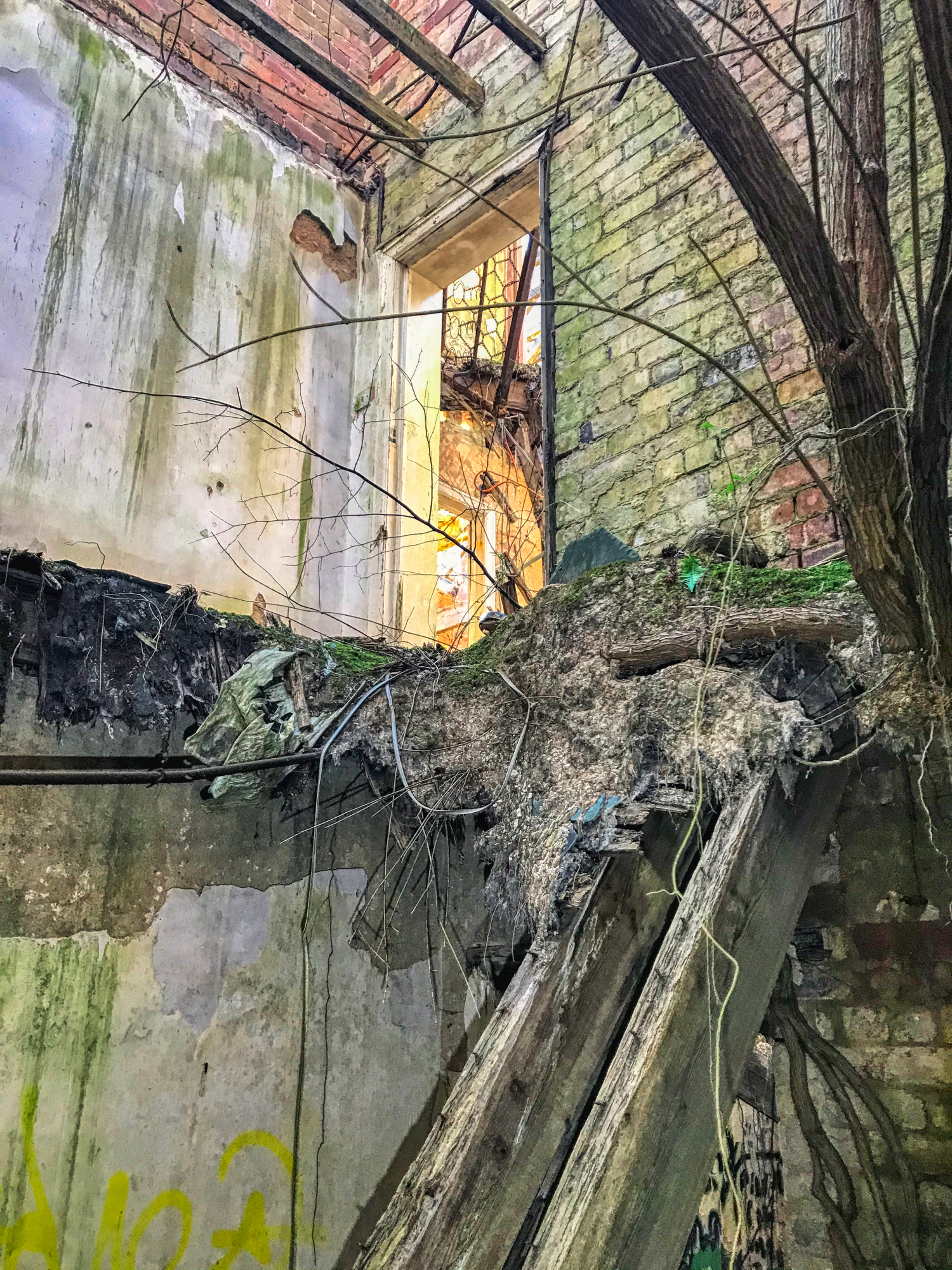 …’could I balance up this beam and get upstairs without holes appearing on the bottoms of my feet?’…

You have to have eyes in the sides of your head in these places. Beams with sharp edges threaten you from all sides. Wood splinters in your cheeks hurt... a bit. 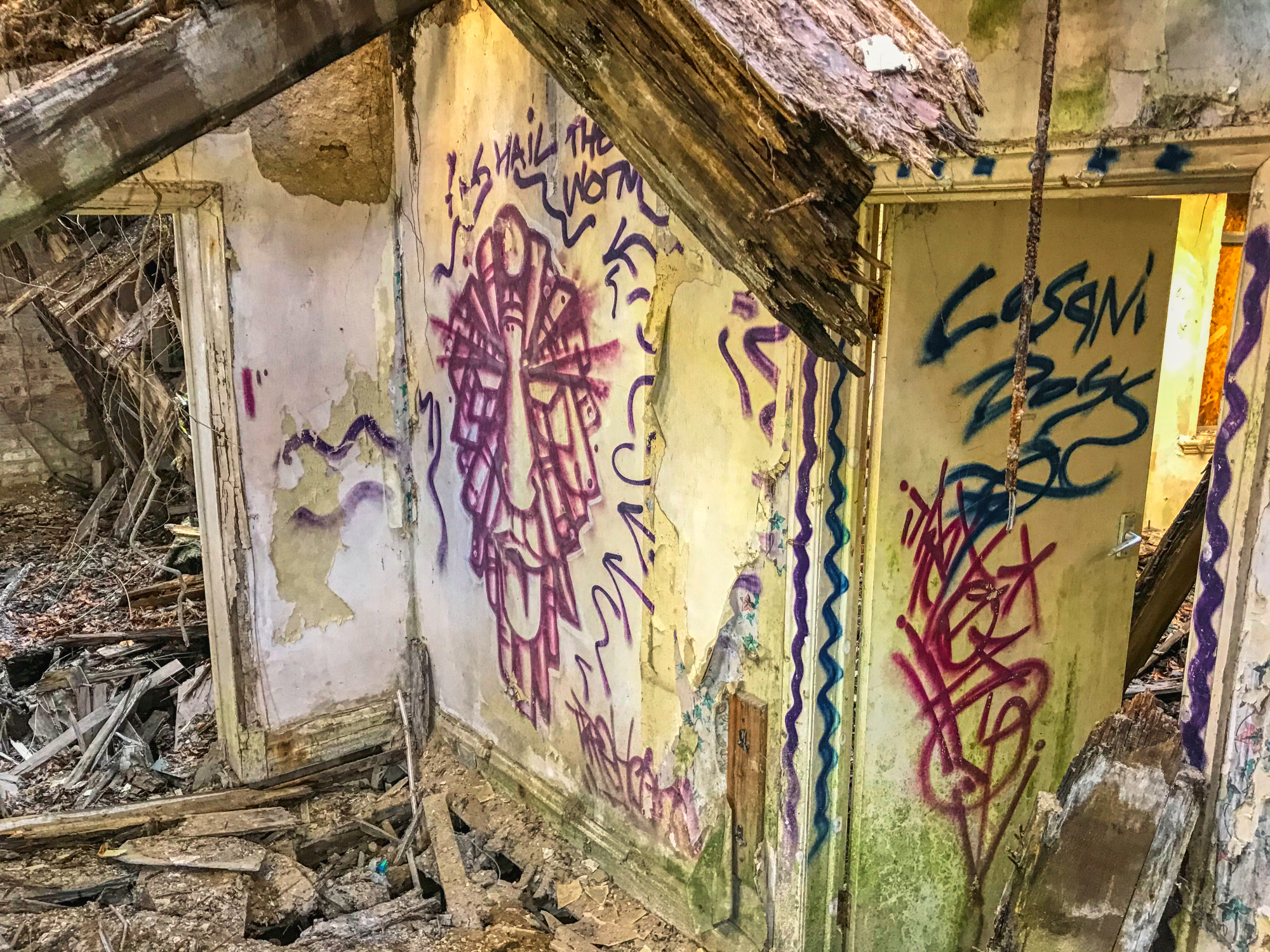 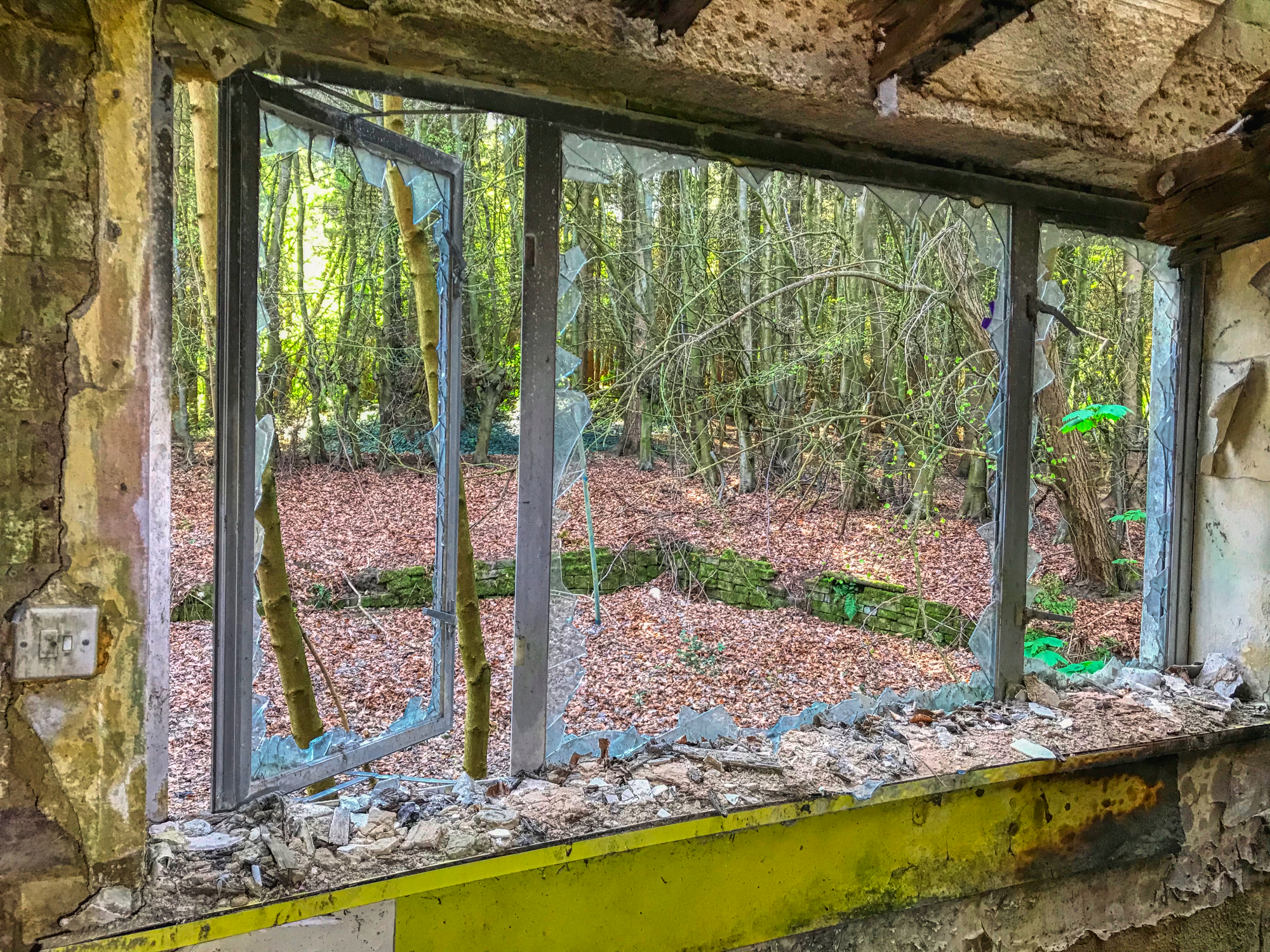 Am I glad there was an accessible door. The window frames were not looking particularly friendly to climbers. I had left those damn gloves in the car again. 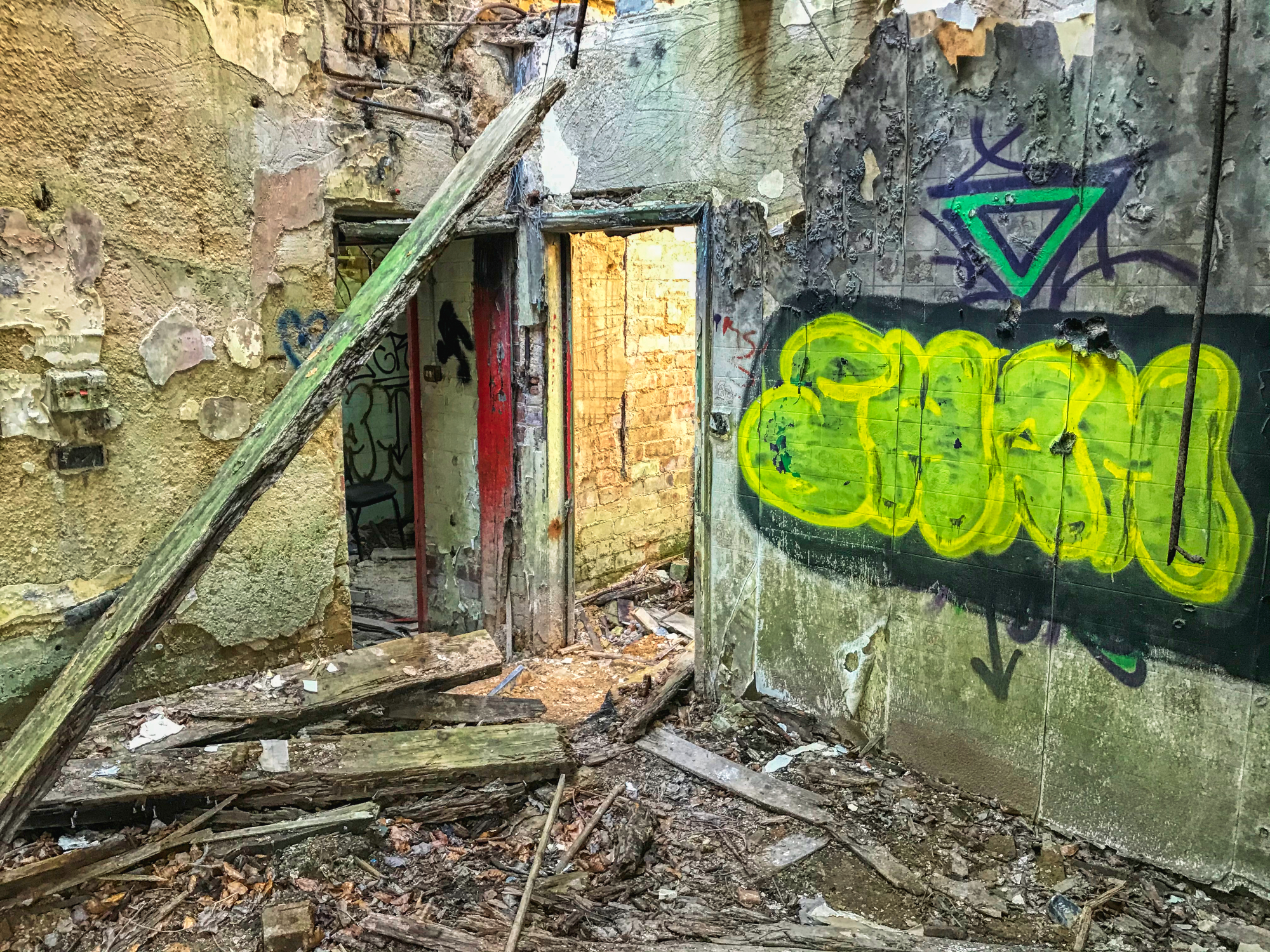 The bathroom was up there on the left. That tiling looks like it was pulled directly from public conveniences. No expense was spared in the decor. 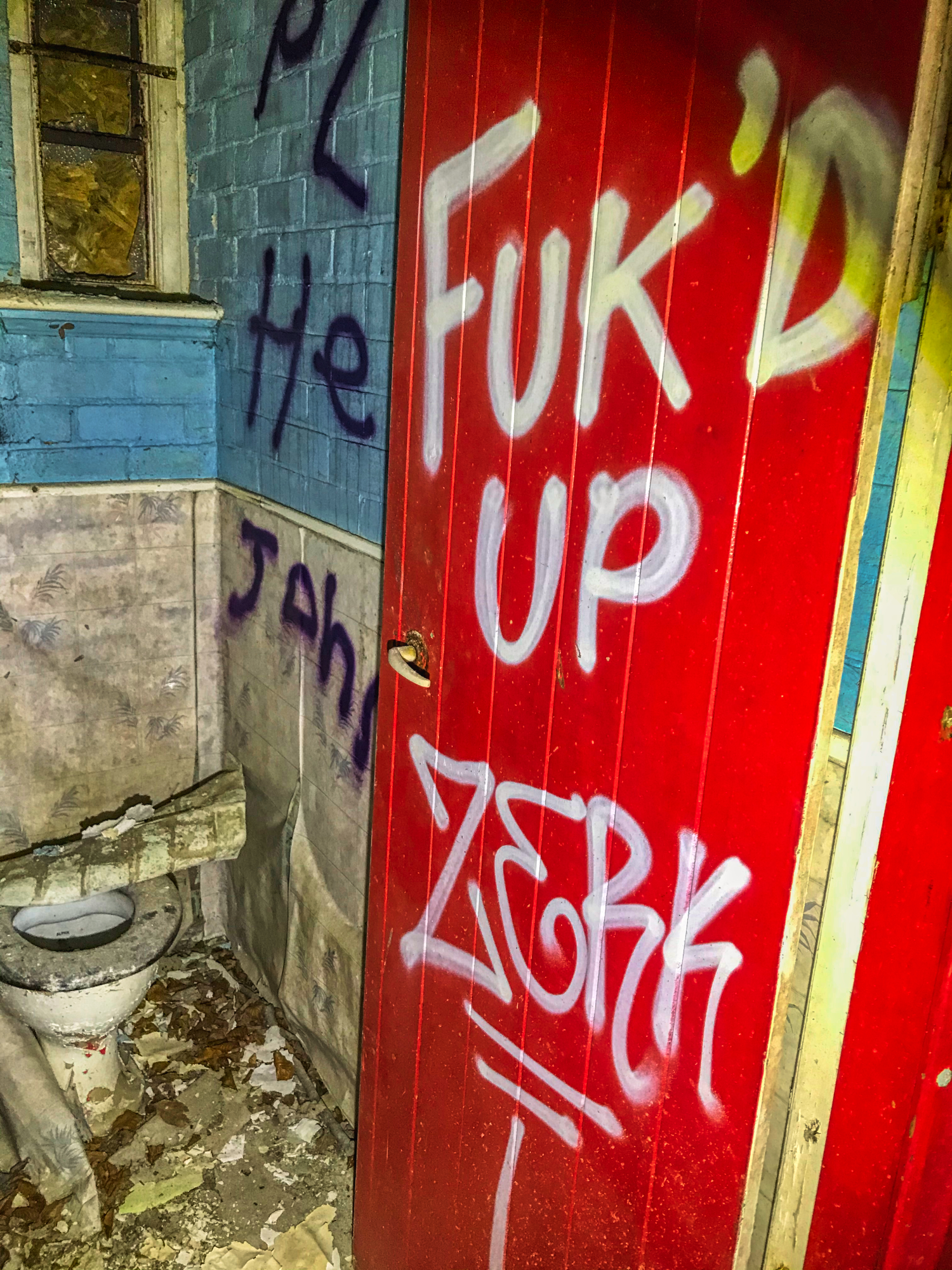 The graffiti level was extreme. This is not an urban location, so where had they all come from? 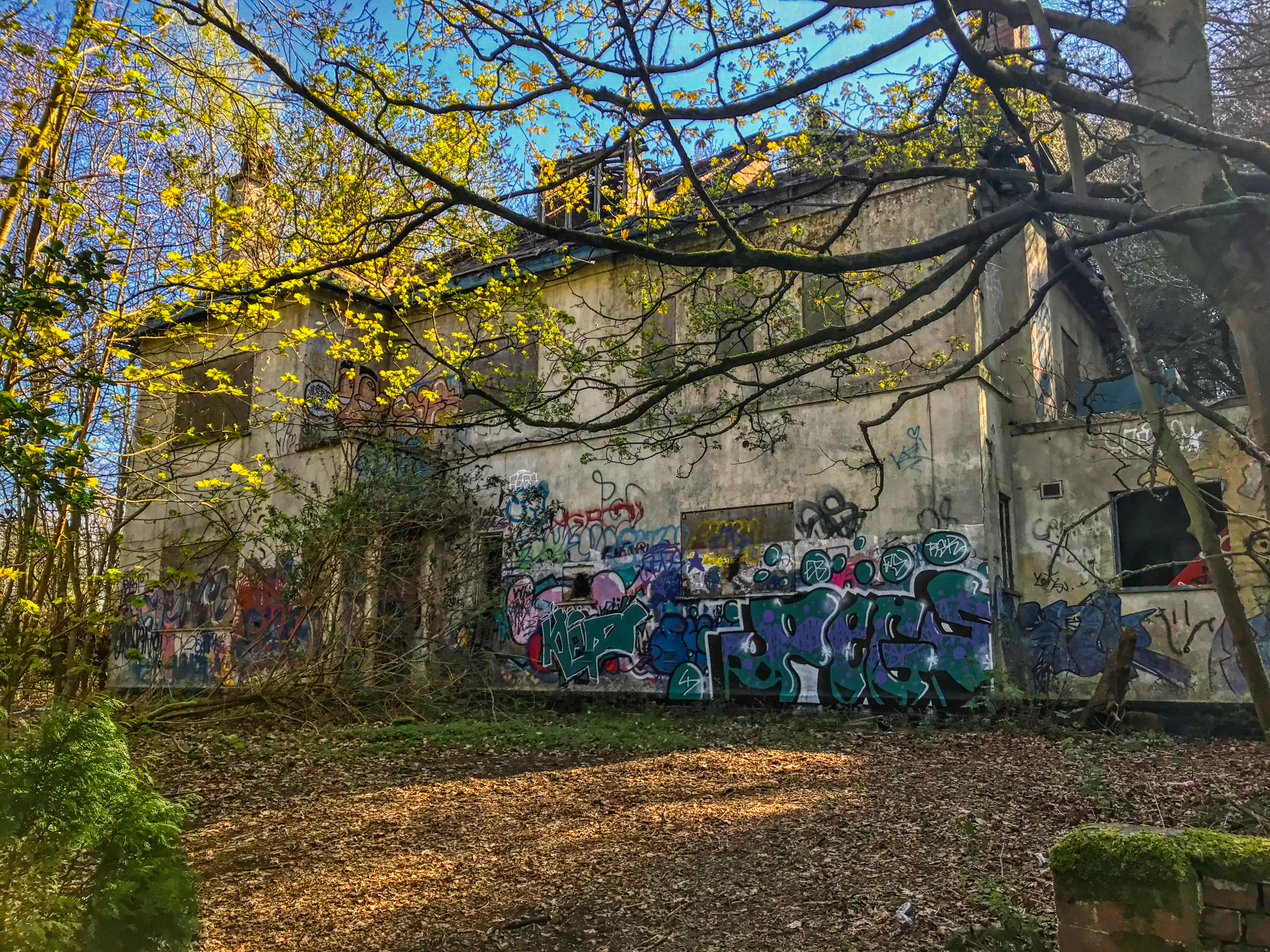 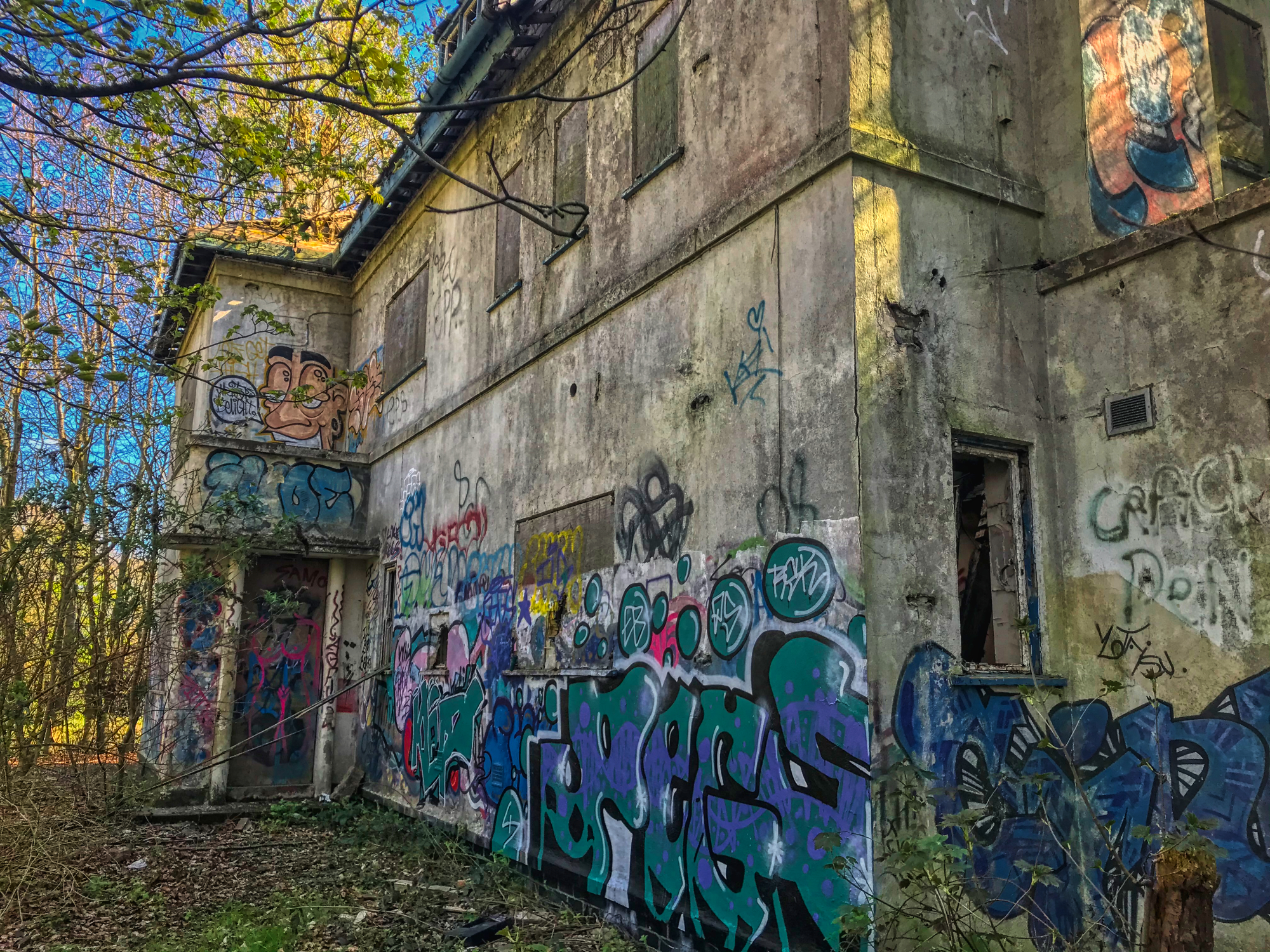 How do you get up there to draw that great cartoon imagery? It looks like there is a ledge, but there is not! These artists take more risks than me to get the prime locations for their work. 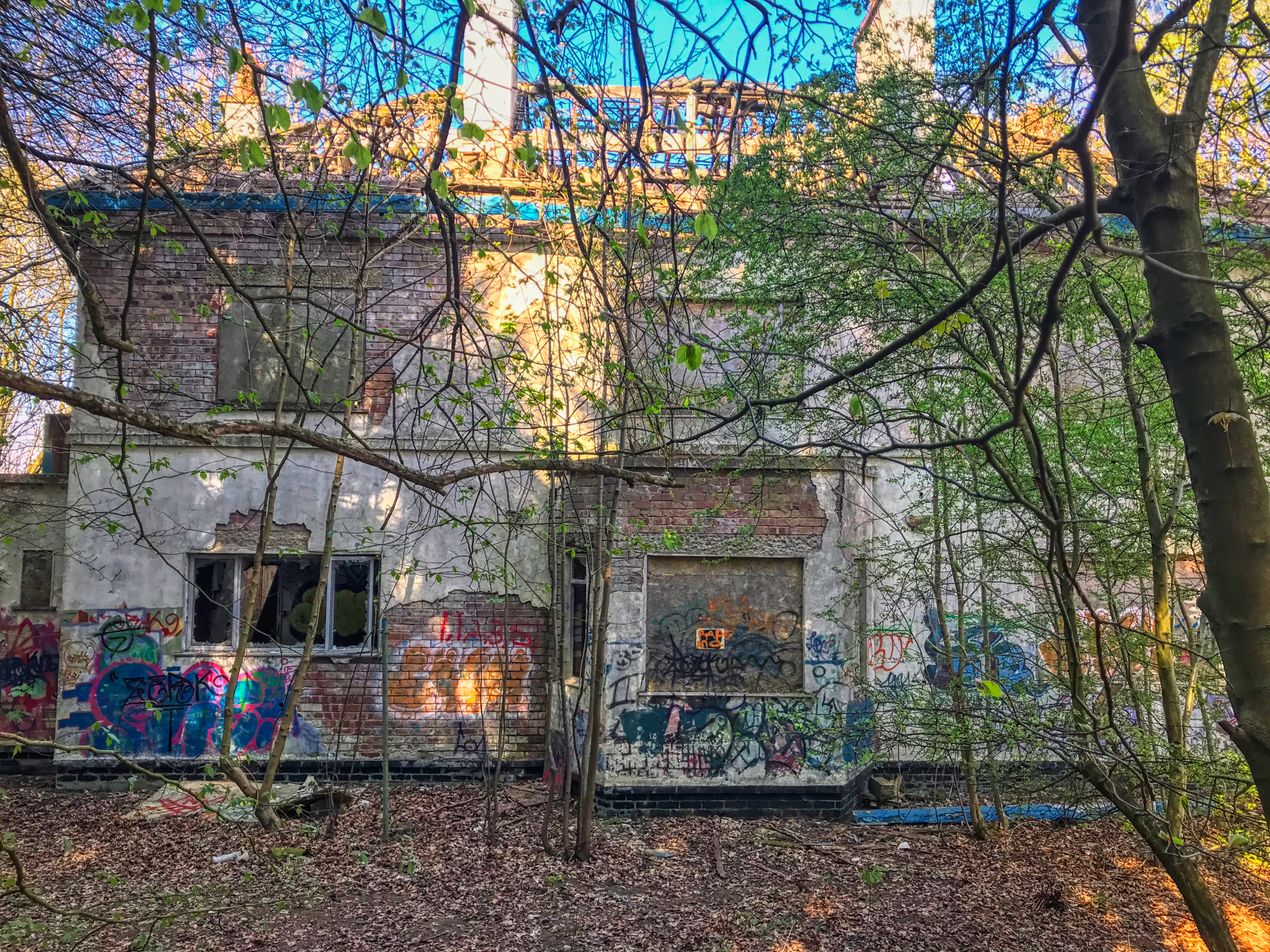 We left down a lane that connects to the main road now indifferent about the mansion owner. Nobody was about, the dogs were even quiet.

@blackman15
about 1 year ago

I can see you are new to HIVE so here's a good tip. Never vote your own comments.

@blackman15
about 1 year ago

Posh Dogs, not only a sausage from Mark's and Spencer but a menace to urbexers!

The graffiti certainly is odd, kind what you would expect in an inter city bit. Maybe the riff-raff were on hols!

It really is a rural place, and that means graffiti is scarce. Could it be the work of one?

One in various states of mind!!

it may seem strange but I like the graffiti that is there, you see a lot of that in my city and even some more disturbing ones.

Oh... I like it, especially the artwork I see. A lot of it is these 'sigs' in crazy lettering. Even that takes skill.

And also true ones, like the "fuck'd up" one. This building is really fucked up with that collapsed roof, and with all that graffiti.

I suppose they look creepy to non-UX people. I love these kinds of places, and they no longer give me the creeps.

So do artists travel there with a ladder? Seems a lot of effort for things that few people will see. Anyway, another shithole that will crumble further. Keep 'em coming!

I can't see another way to get up there. It's not as though there is a large audience waiting to look at it either. If I ever meet another I will ask. Another derp coming soon.

Seems a lot of effort for things that few people will see.

This is true for many things. Even for a lot of Hive posts.

With all of that graffiti, the mansion owner must not care or not notice. Looks wild, people have been marking that place up for a long time

the mansion owner must not care or not notice

Or no longer lives.

I don't think it's connected to the mansion 'next door', meaning they are not the owners.

Hiya, @choogirl here, just swinging by to let you know that this post made it into our Top 3 in Daily Travel Digest #1276.

That is the most graffiti I have seen in a long time. It does remind me a lot of NYC from days back and the kind of lettering found on bridge overpasses.

I can tell you that whenever work was done, our own ladder was always on hand.

It surprises me with the close proximity to the main house that they have turned a blind eye to it. I would want to fix it or level it. Anything less will bring on the vagrants and the awesomeness of an urbex team. And why not? I was really hoping for some leftover treasures or neat stuff. They made off with it or it really was a carriage house.

It looks deceptively nice on the outside!

I would want to fix it

Fixing these kinds of buildings would be good. There are many abandoned buildings like this one. They could be a home to many people.

No treasures in here, it's too far gone. The kind of vanish under all the rubble after a time. Even the homeless don't bed down in these, though I see them having a go and then moving on. They leave all their stuff behind. I'm sure the government give out disposable sleeping bags or something.

Nice paintings and artifacts.
The person must have taken his/her time to make those.

I think I am addicted to your posts sir,
KEEP EXPLORING👍 👍 👍

@etere
about 1 year ago

Good gosh man. I hope you have your tetanus shots and stuff. Maybe some penicillin for the ones with stripper poles.

Maybe the dogs are used to visitors at this Lodge, there have been plenty of graffiti artists over the years. My goodness I am glad that you have not been hurt big time ----- falling thought the floors and being cut by glass. It is an adventure and a sport I can see, hahaha.

The graffities look so nice. I wondered how they were able to draw them in such a place in ruins.

Nice
but i wanna see
"the shag pad"

These are cool I always used to want to do a fashion shoot in an abandoned asylum.