“I tried three times to get in there, there was always some bastard parked at the entrance when I went”, @anidiotexplores explained to me with a note of exasperation.

He was talking about an old mansion that was little more than a shell, or so I was told. I had come across it by searching, spilled the beans and he had already done it! Nevertheless, I still wanted to have a look, old empty derp or not. They all have to be explored and in hindsight I was not a minute too early.

After a hill walk due to lack of parking, we came to the corner where "some bastard" had thwarted my colleague on several occasions.

There was no sign of anyone but getting in could attract some attention as it was close to a busy road with unwelcome traffic lights.

Checking as best we could for cops and Karen's we deftly leaped over the 6-foot wall or at least @anidiotexplores did with me toiling as normal. 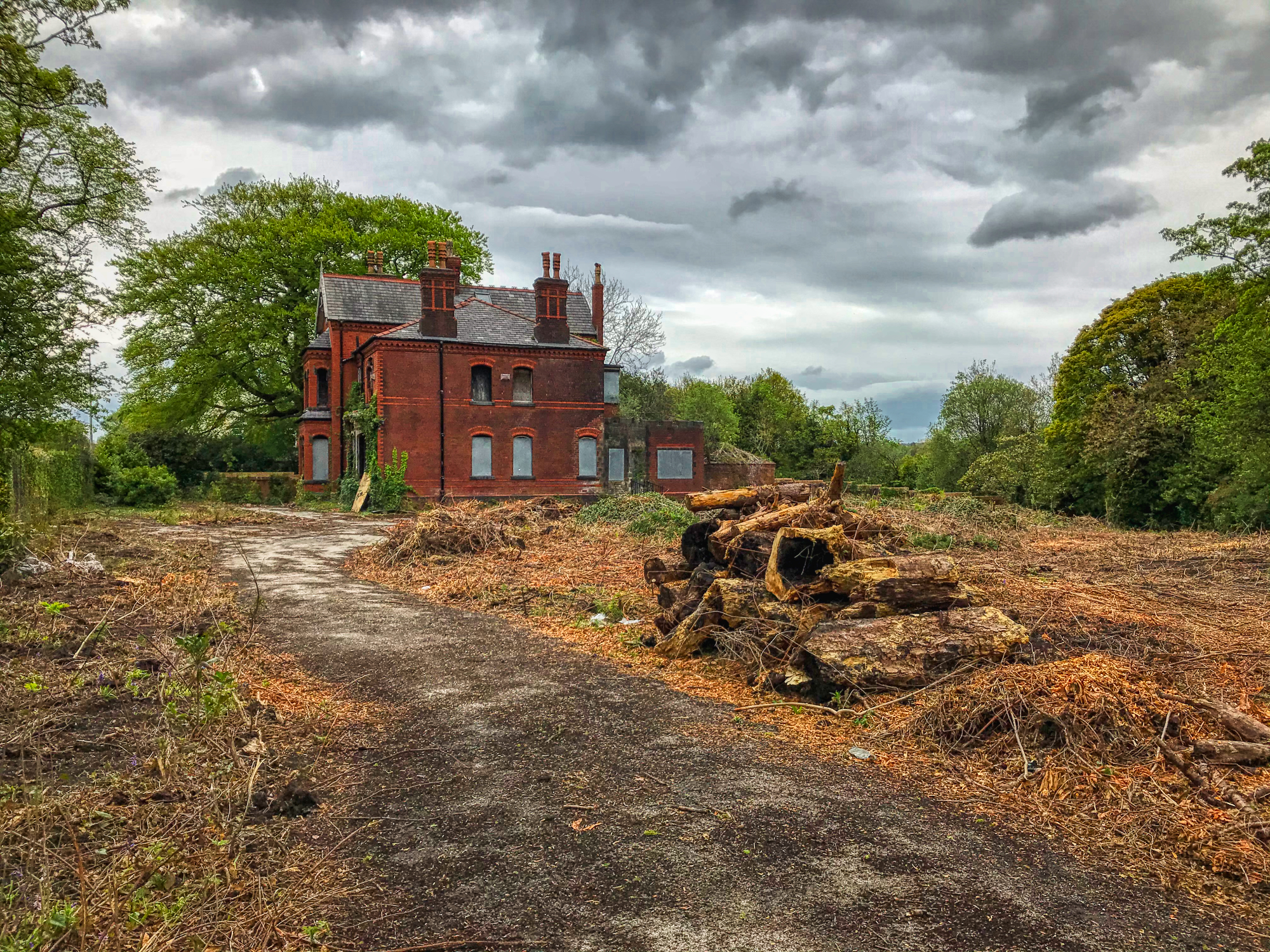 "The trees have been cleared away", exclaimed my comrade in surprise. I knew only too well what that meant.

It's always a pre-cursor for demolition, or at best renovation. 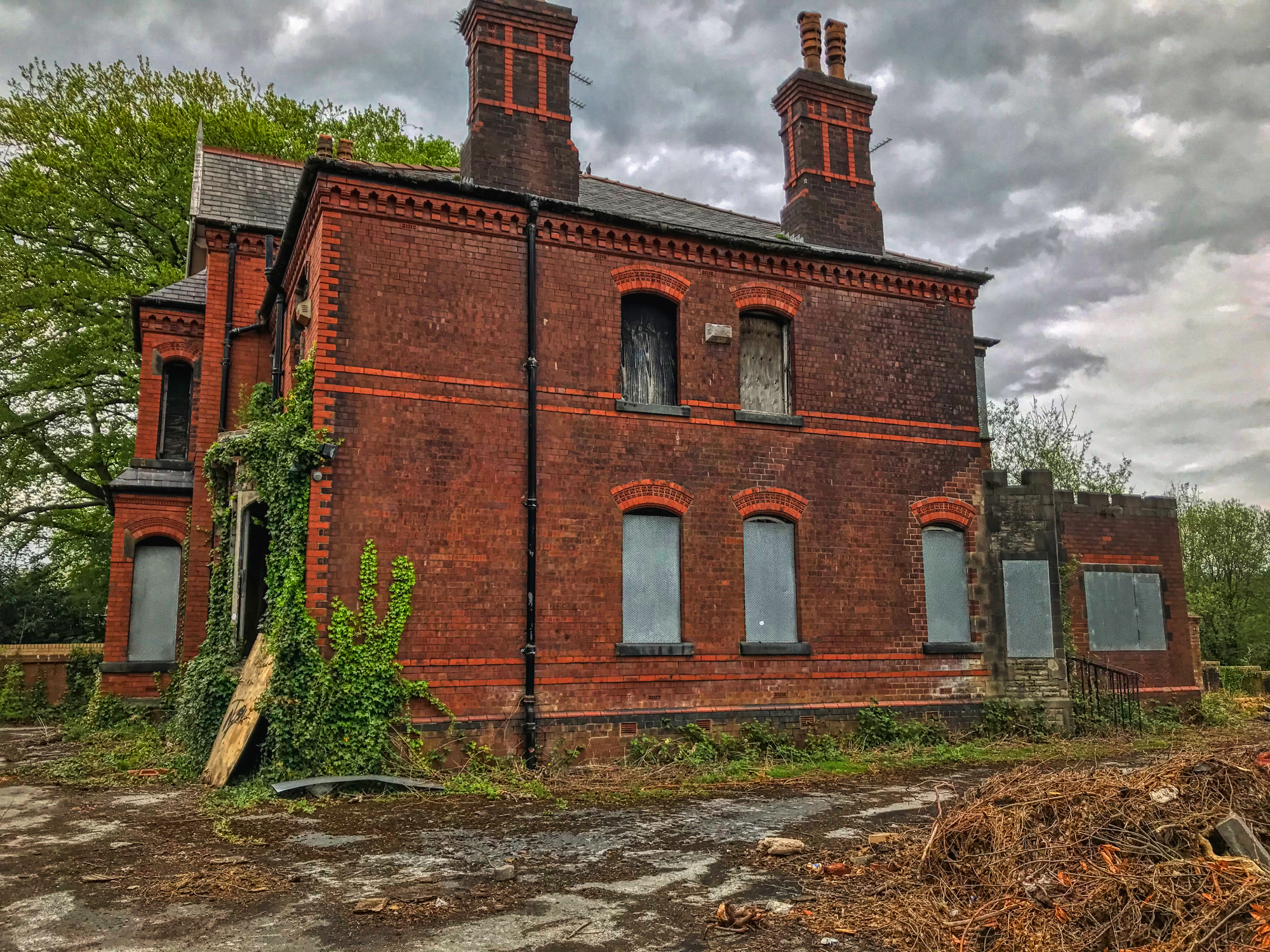 We quickly approached the old manor house designed in that typical architecture the Victorians loved.

Getting in was not going to be exactly tough and so I opted for the most obvious entrance, that front window.

Immediately I was surrounded by droppings from those flying rats who like so much to scare the shit out of me.

Pigeons don't take kindly to intruders and though they are quite terrified of humans take it upon themselves to fly out in front of you when unintentionally disturbed. 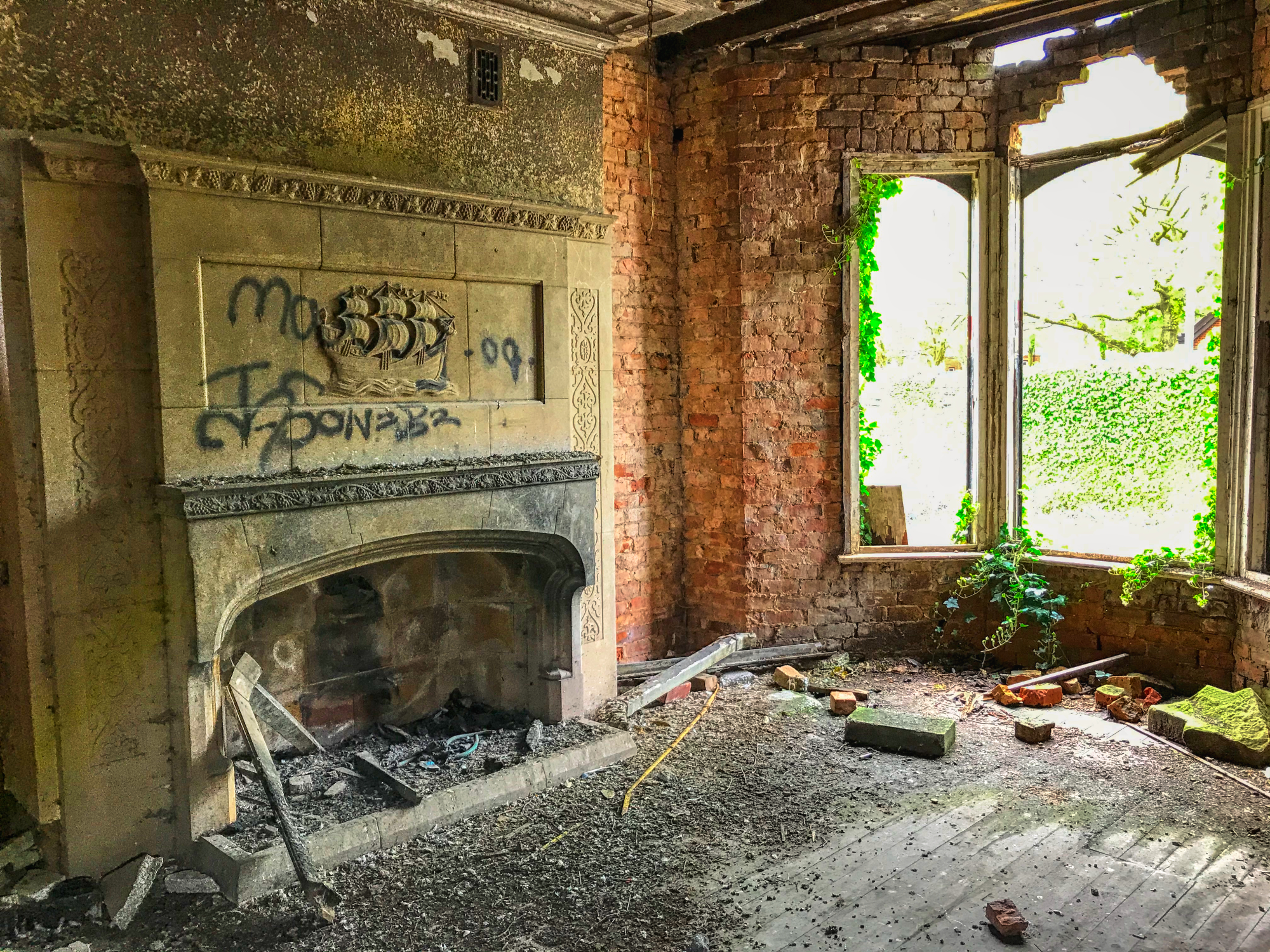 If anything was redeeming about Pigeonshit Manor, it was the fireplace. I loved the ship design that must have been lovingly handcrafted once long ago. 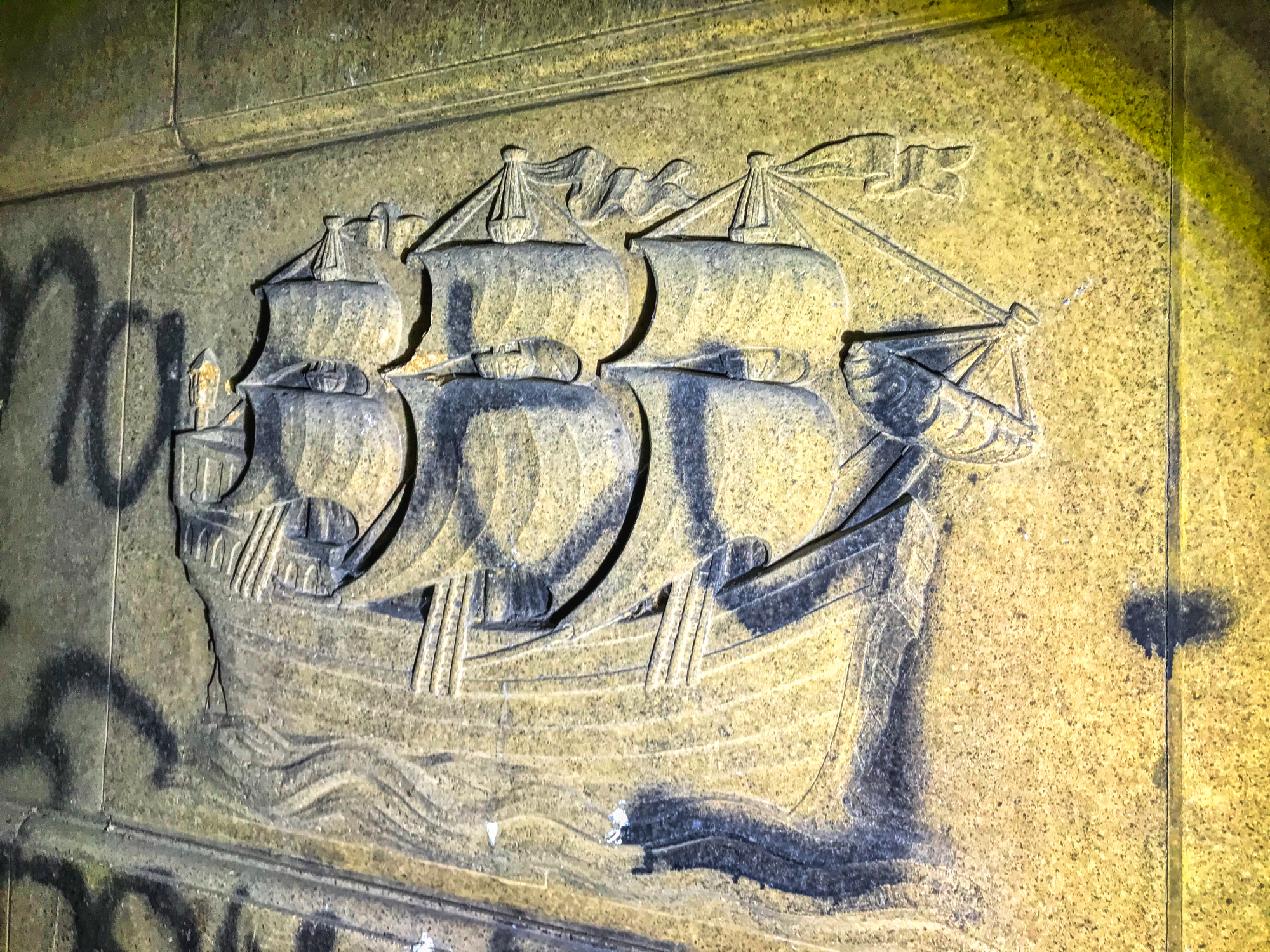 It's a shame some shithead has to graffiti over the top of it marring the effect. The manor house had been gutted but contained a better roof than most, or so I thought. 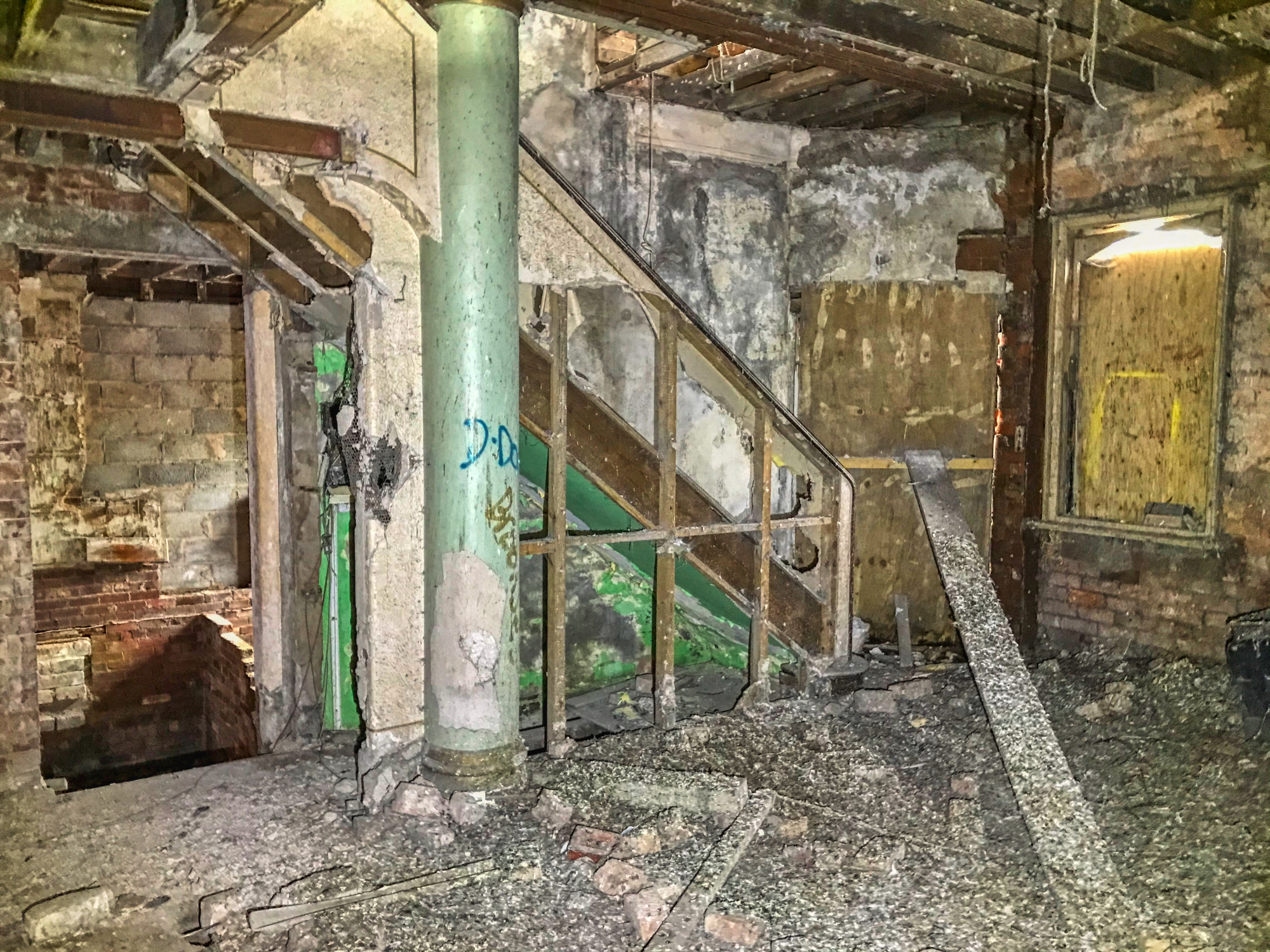 For this reason, I was astounded to find some very solid steps and a very accessible second storey. 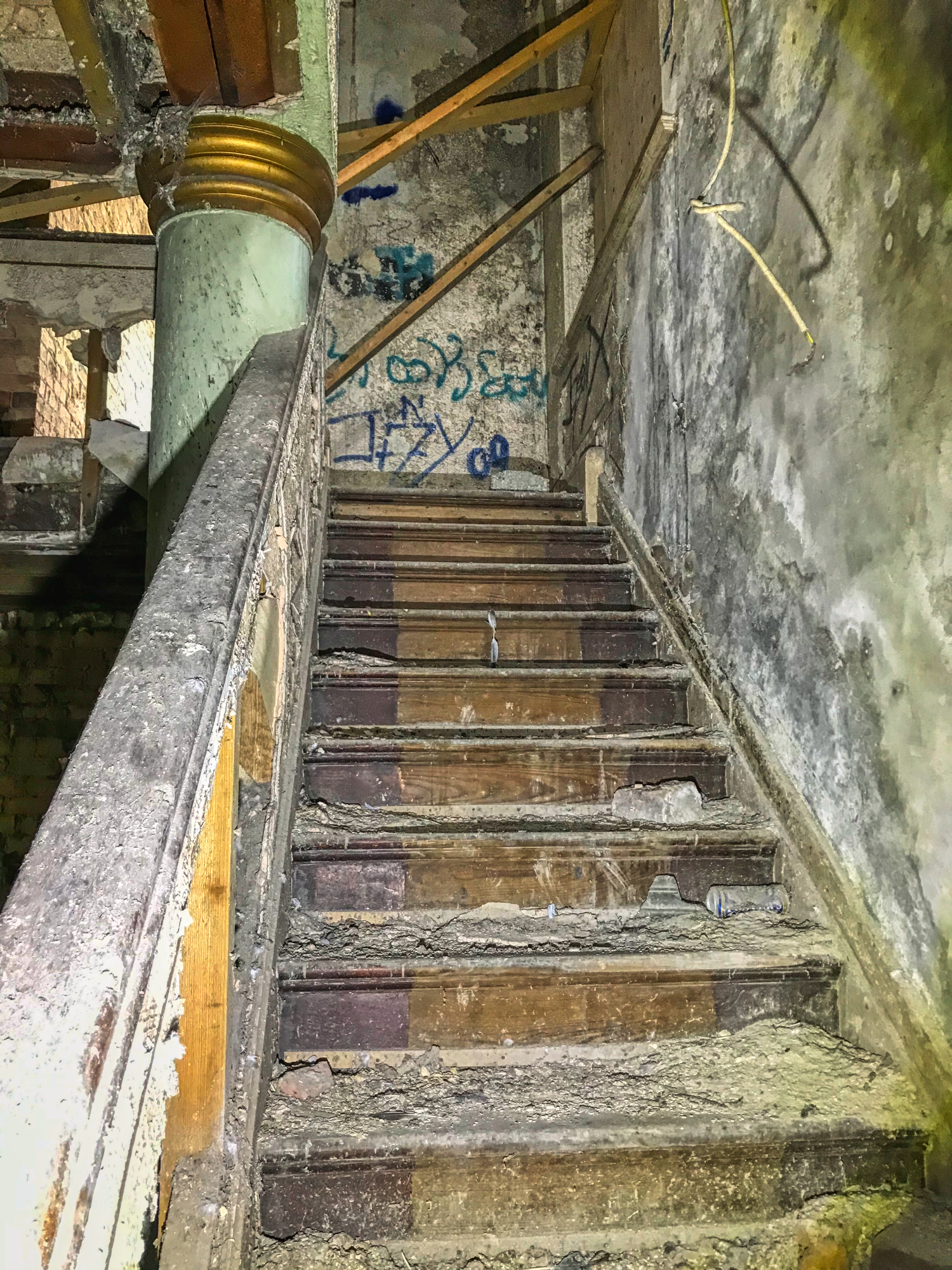 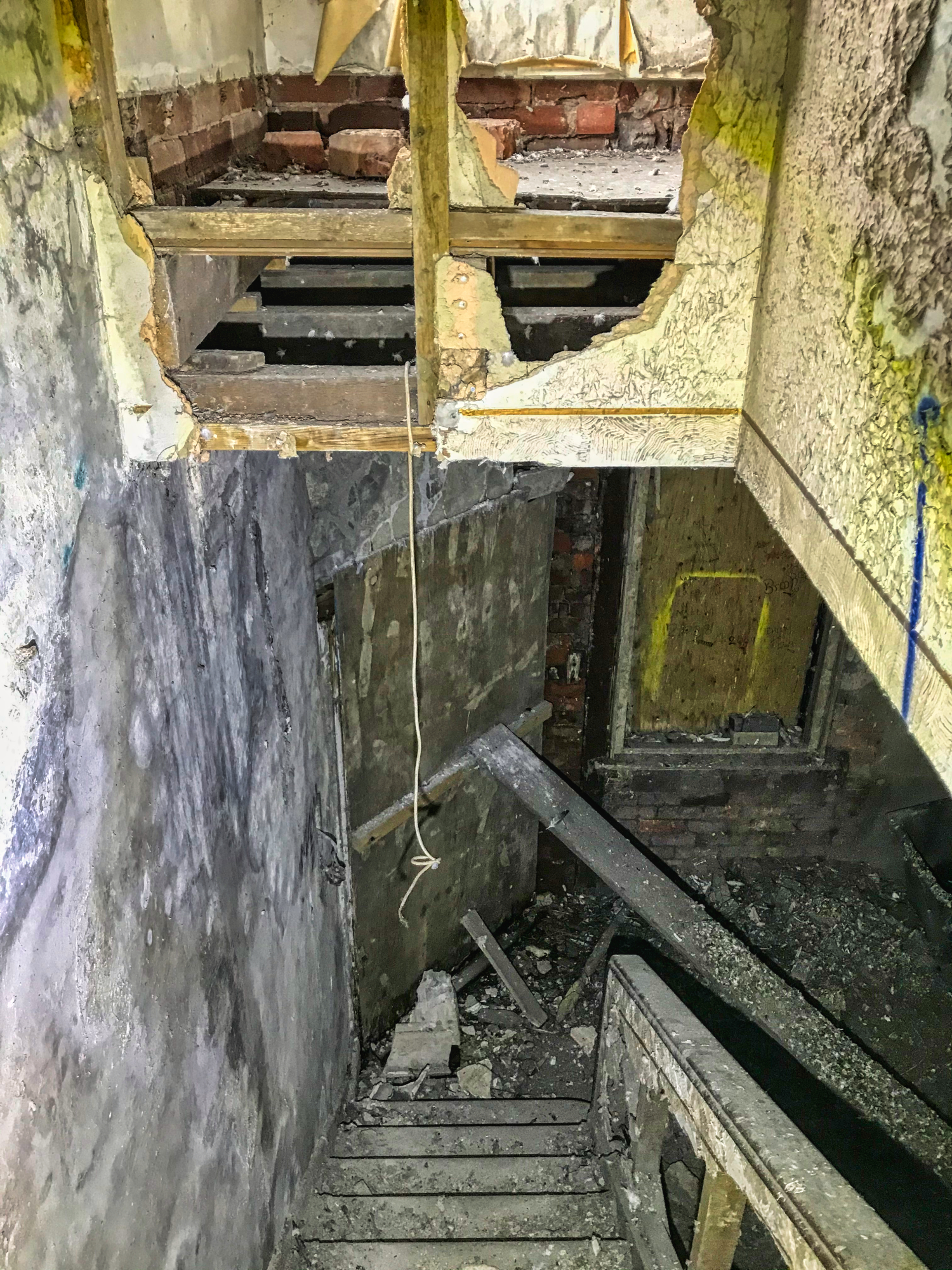 Had someone tried to hang themselves?

TIP: Use rope that is a little thicker next time and make it shorter. I am not speaking from past experience I will have you know. 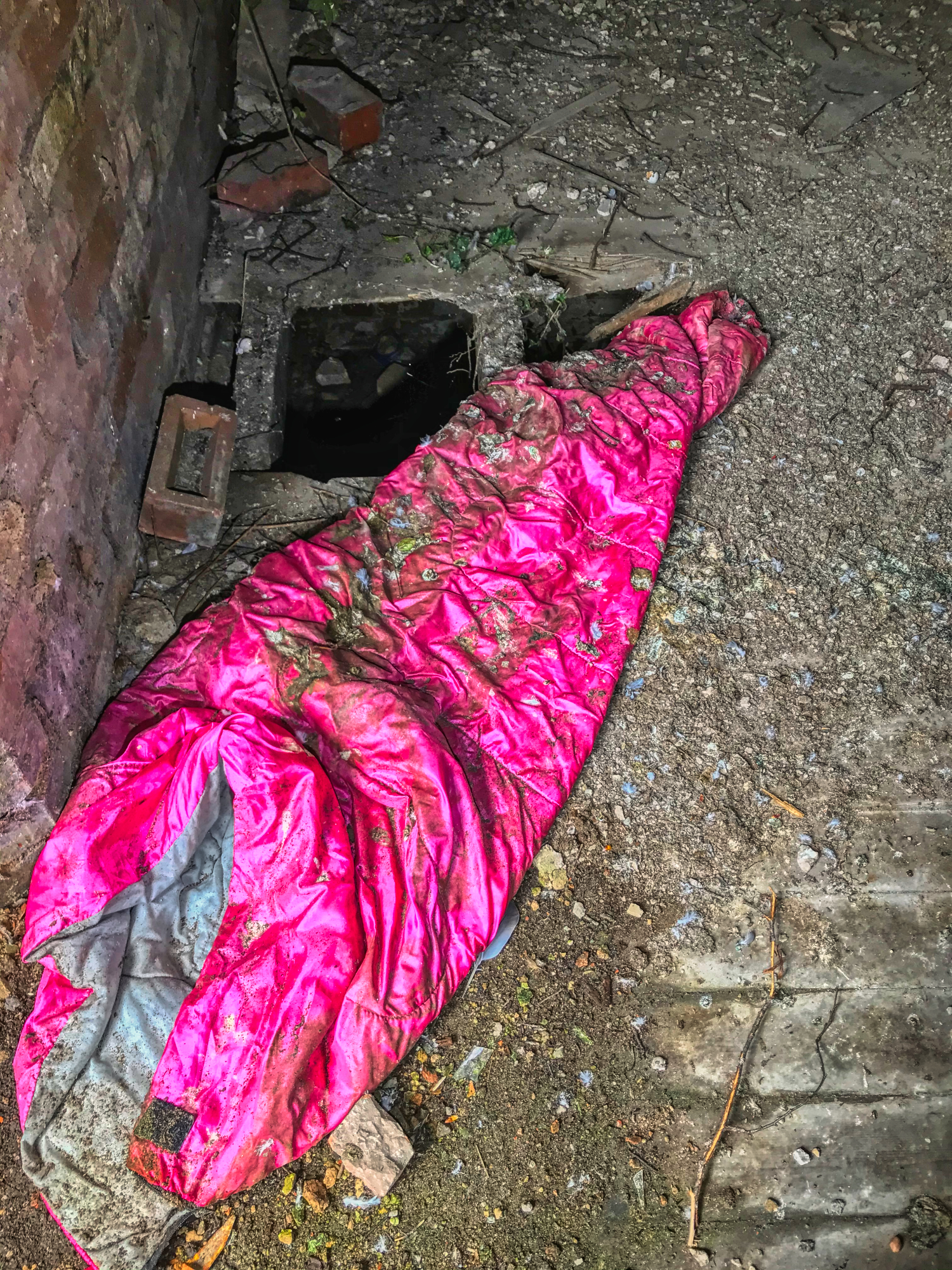 You must be quite desperate to try and bed down in here. 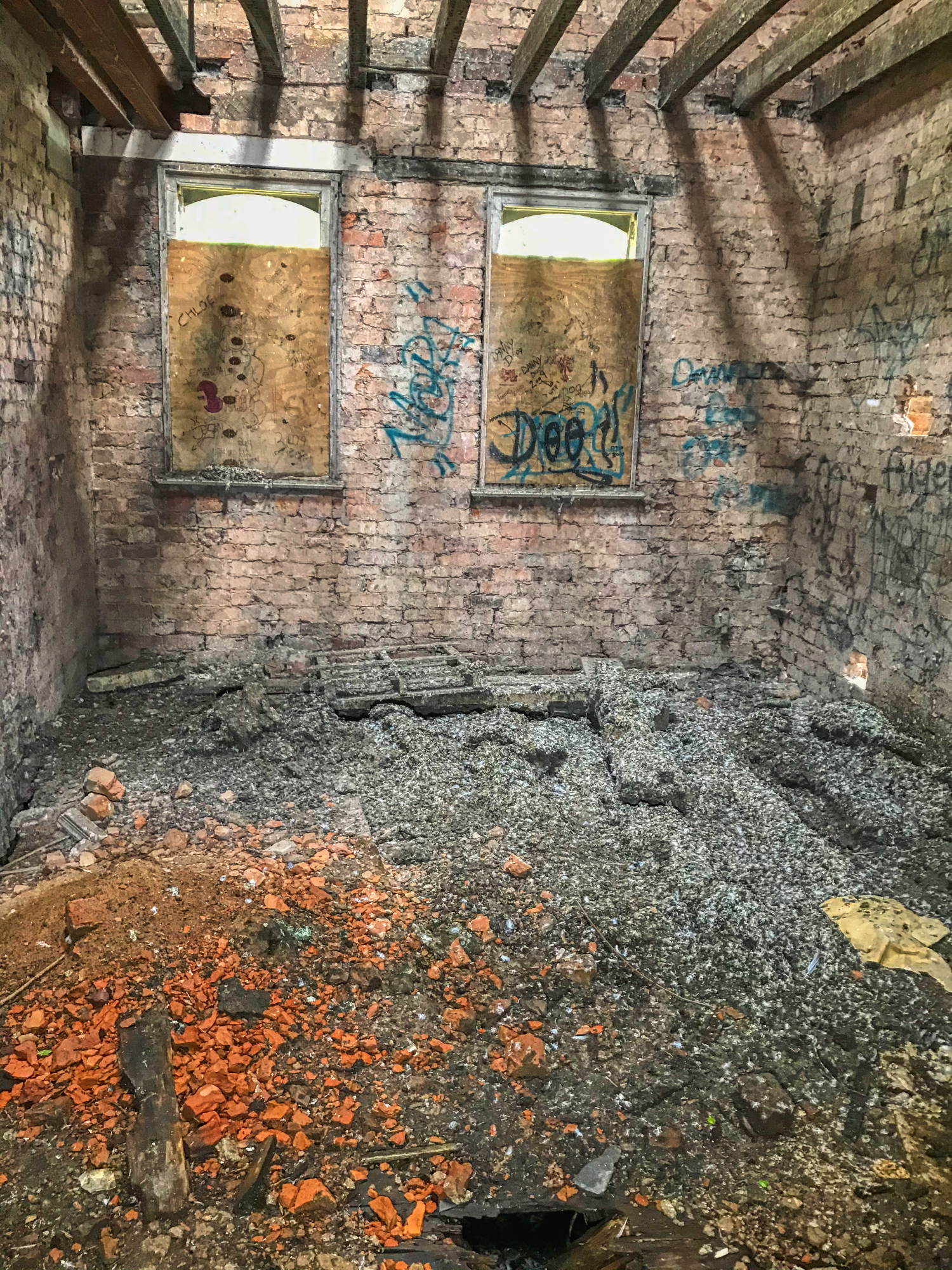 I have seen lots of shit but this one took the biscuit. It was thickly laid and I know @anidiotexplores has a particular aversion to this stuff. 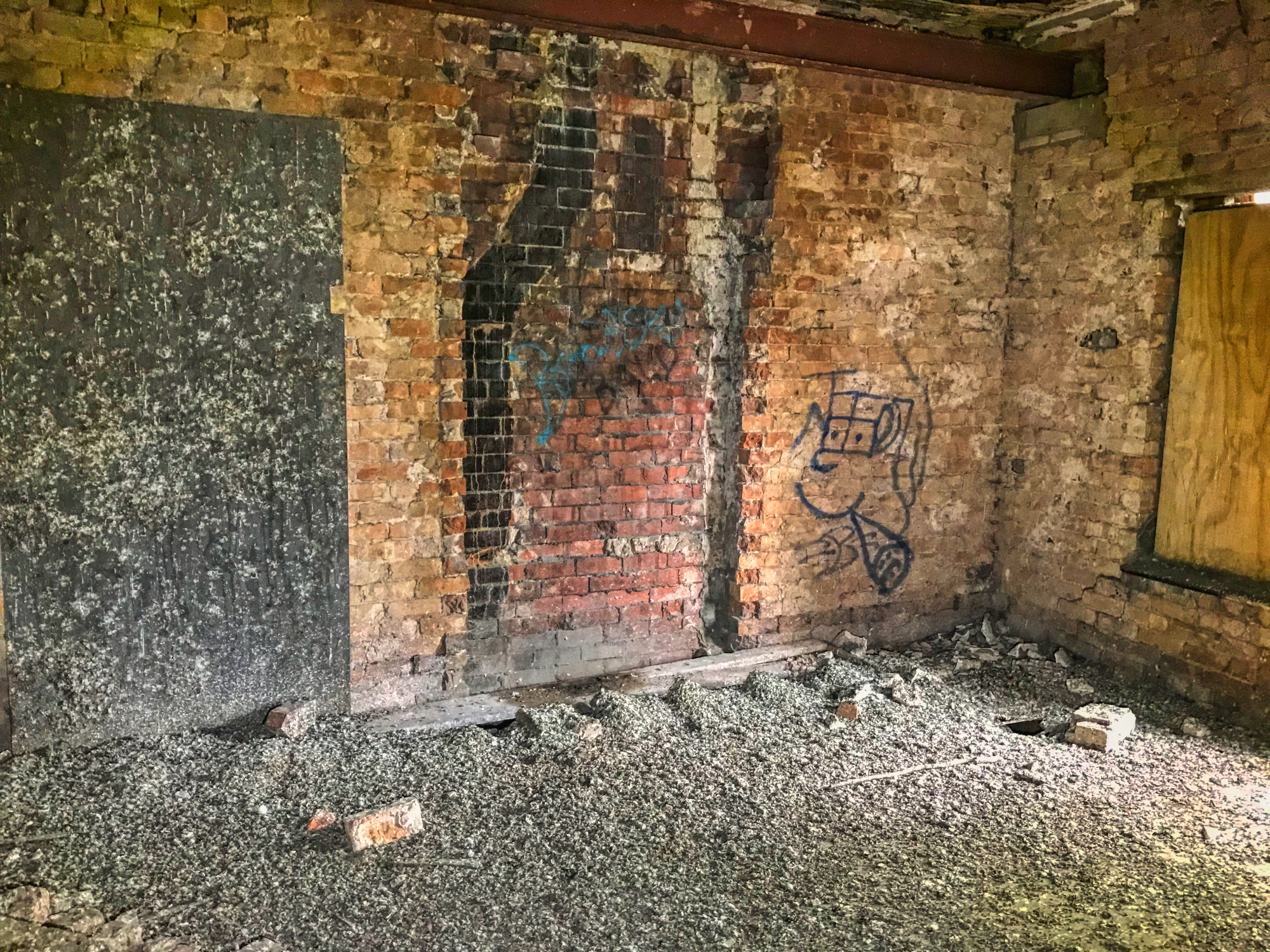 Upstairs was not quite so solid, besides walking on all the dung and with the amount of light showing through I had little desire to enter this room. 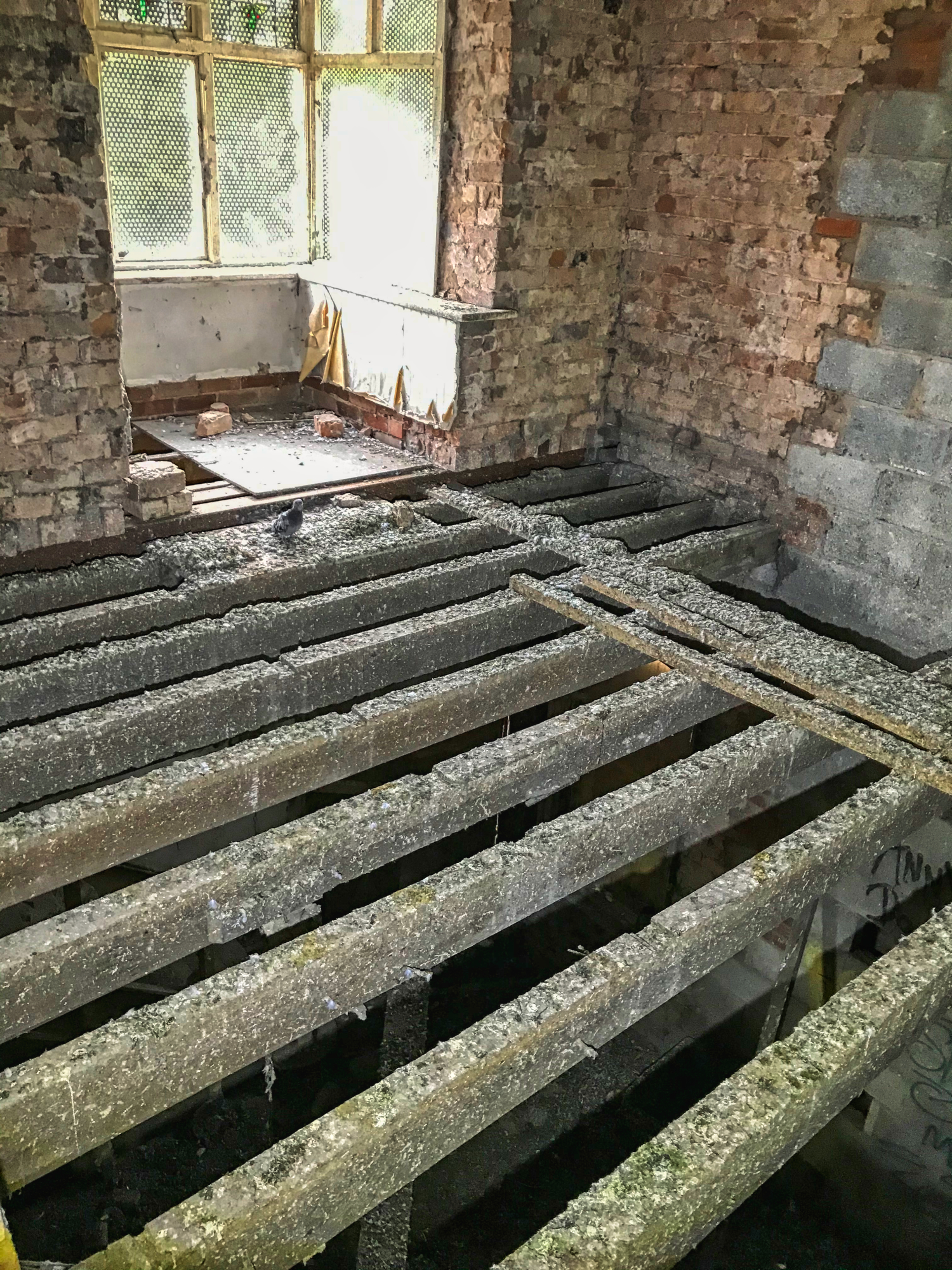 A baby pigeon was cooing for its mother. You can coo all you like pal, we are not going to give you
birdseed. 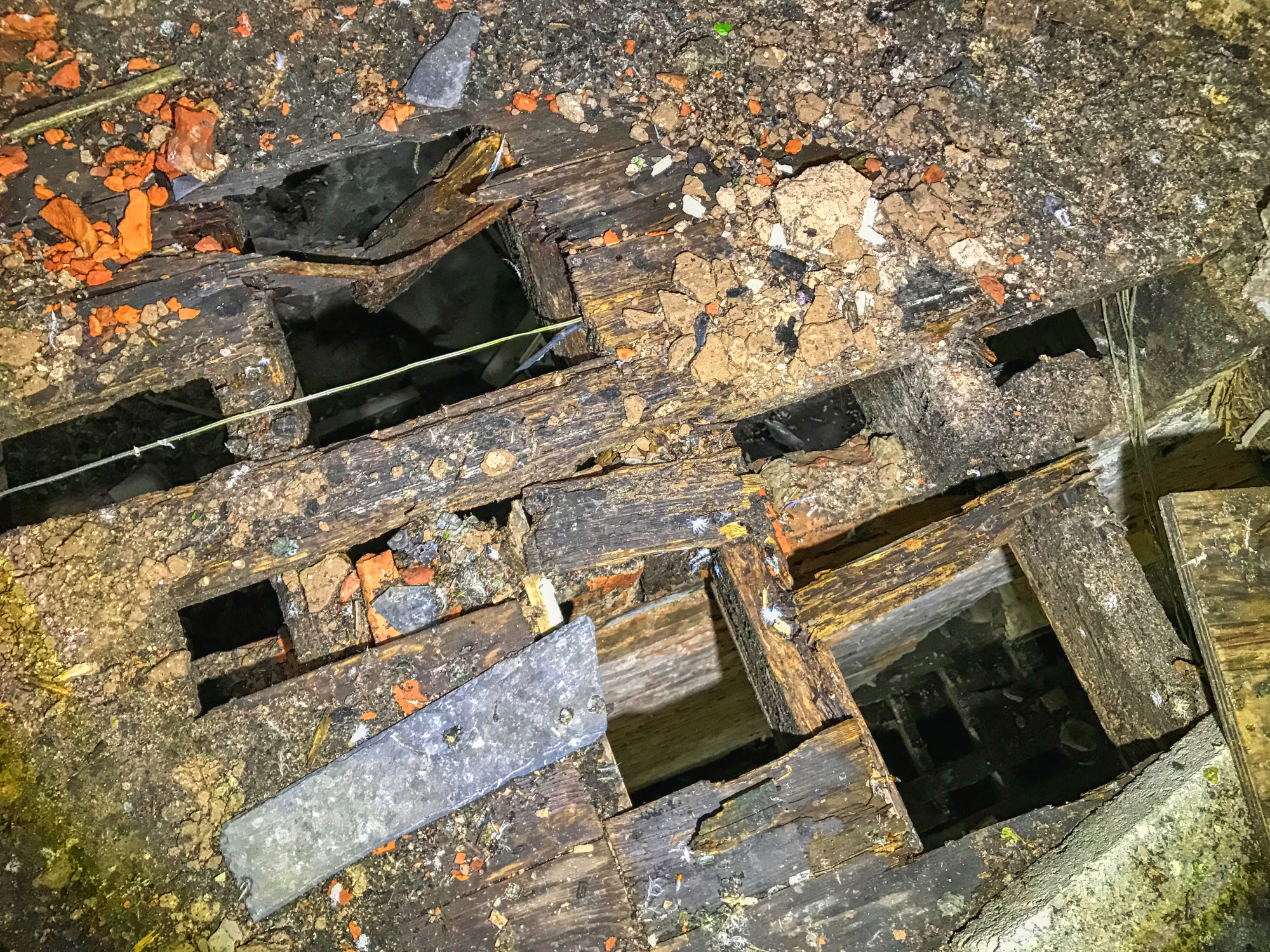 Some upper areas of Pigeonshit Manor were strictly off-limits. It does amaze me how robust these old ceilings are if you simply walk around the holes. 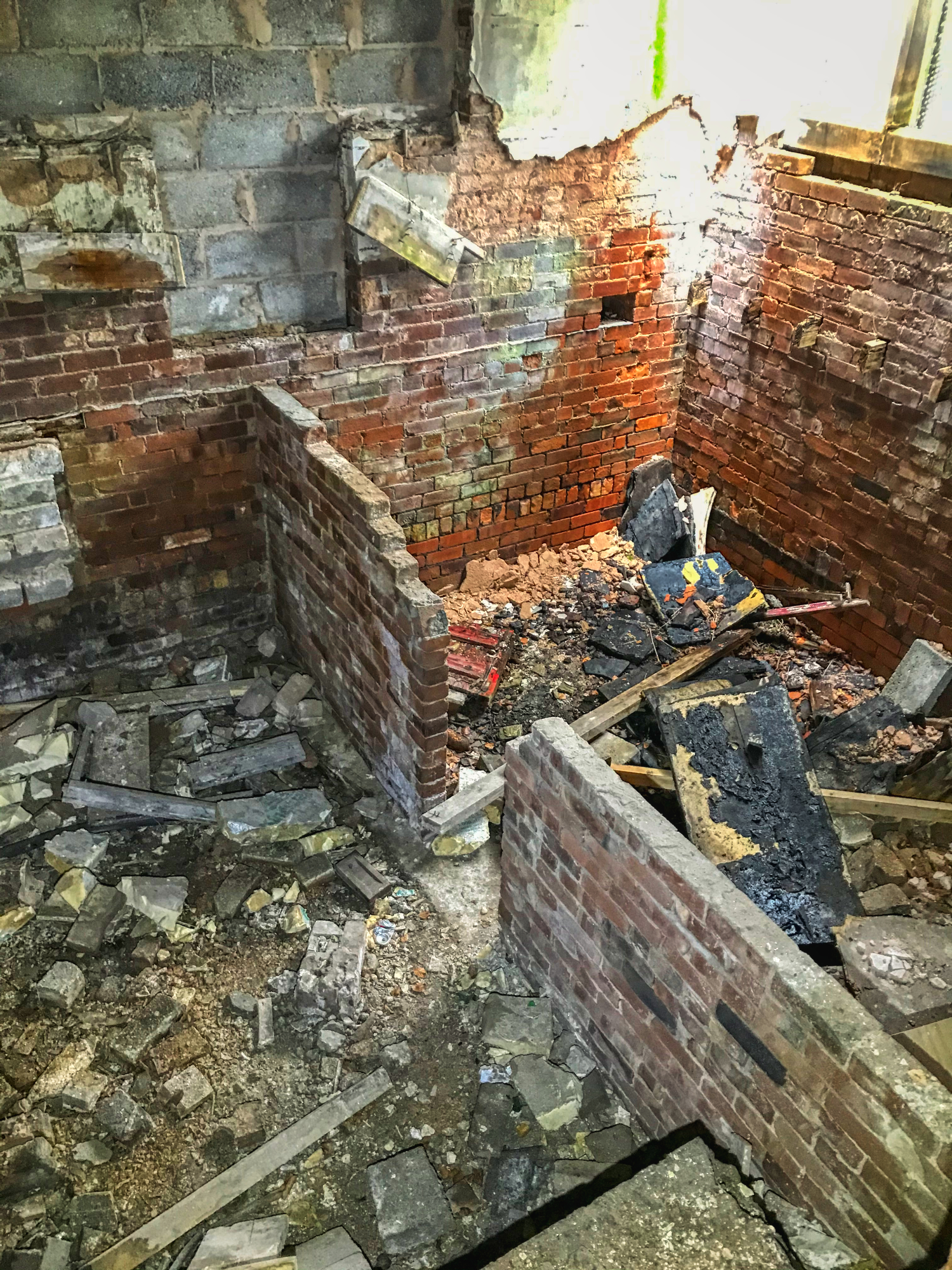 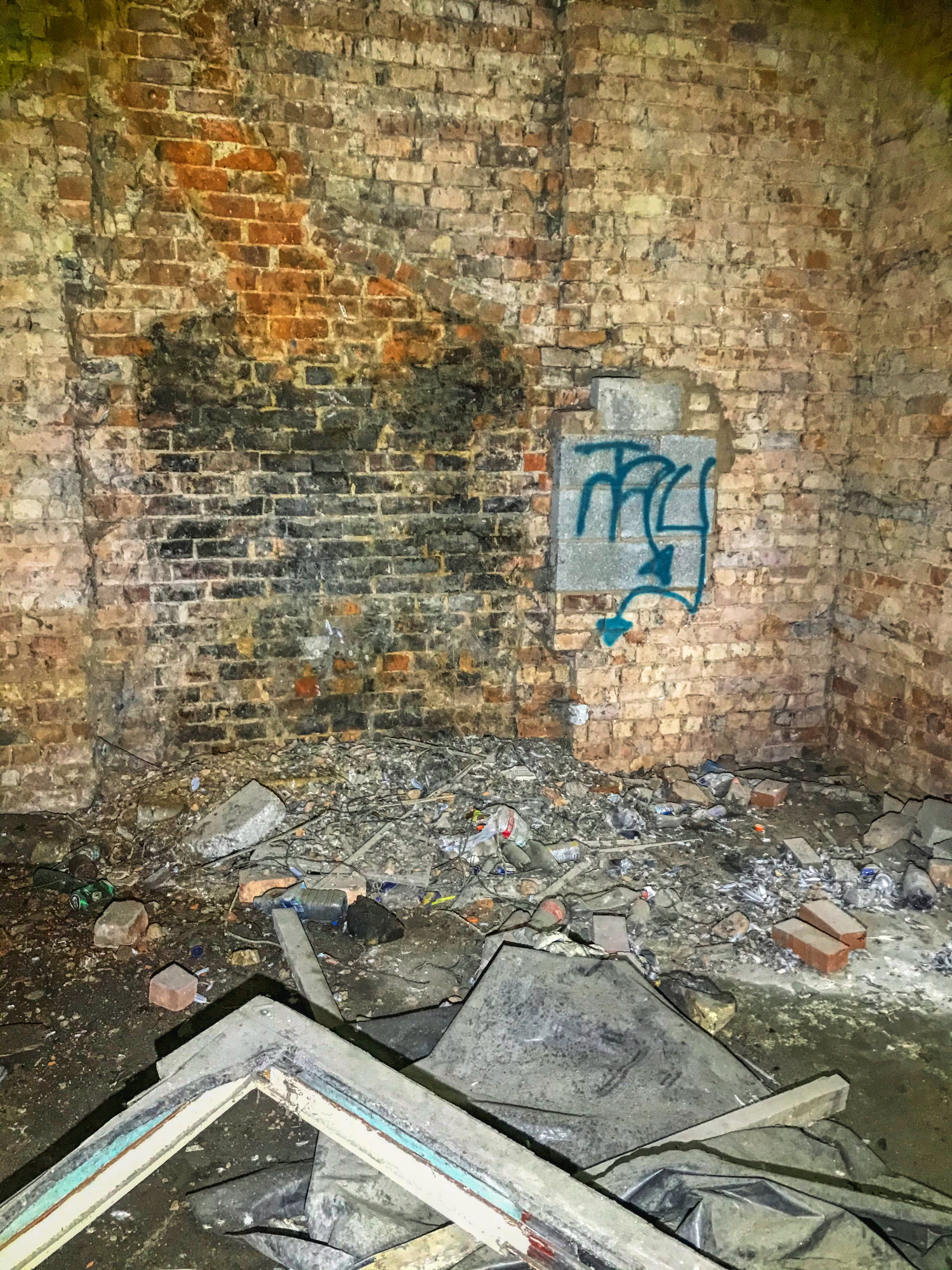 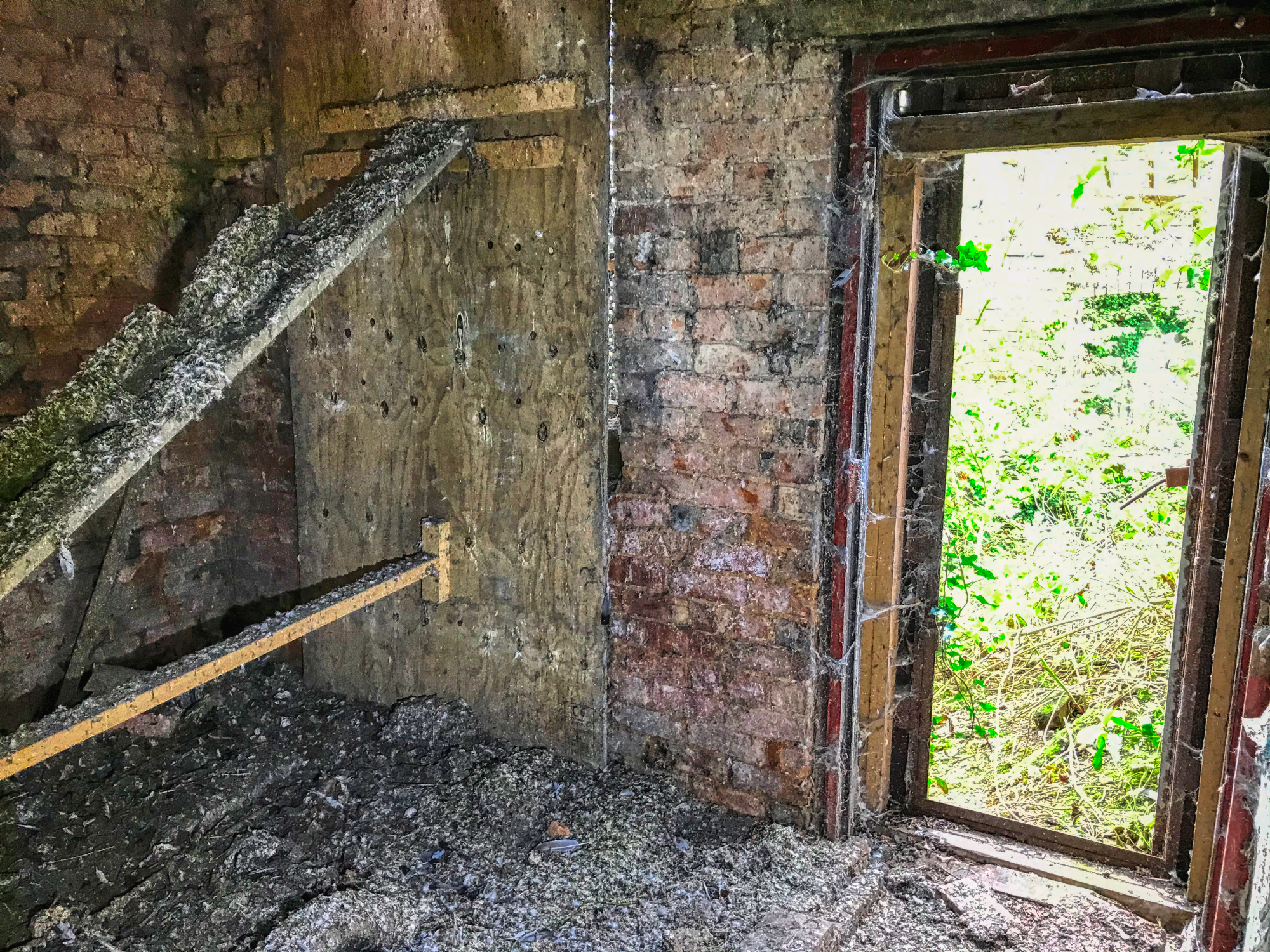 No matter how easy the access point is, you generally can find one that is even more so. I do value the exercise and don't regret for a minute my climb through the front window that burnt approximatively 2 calories. 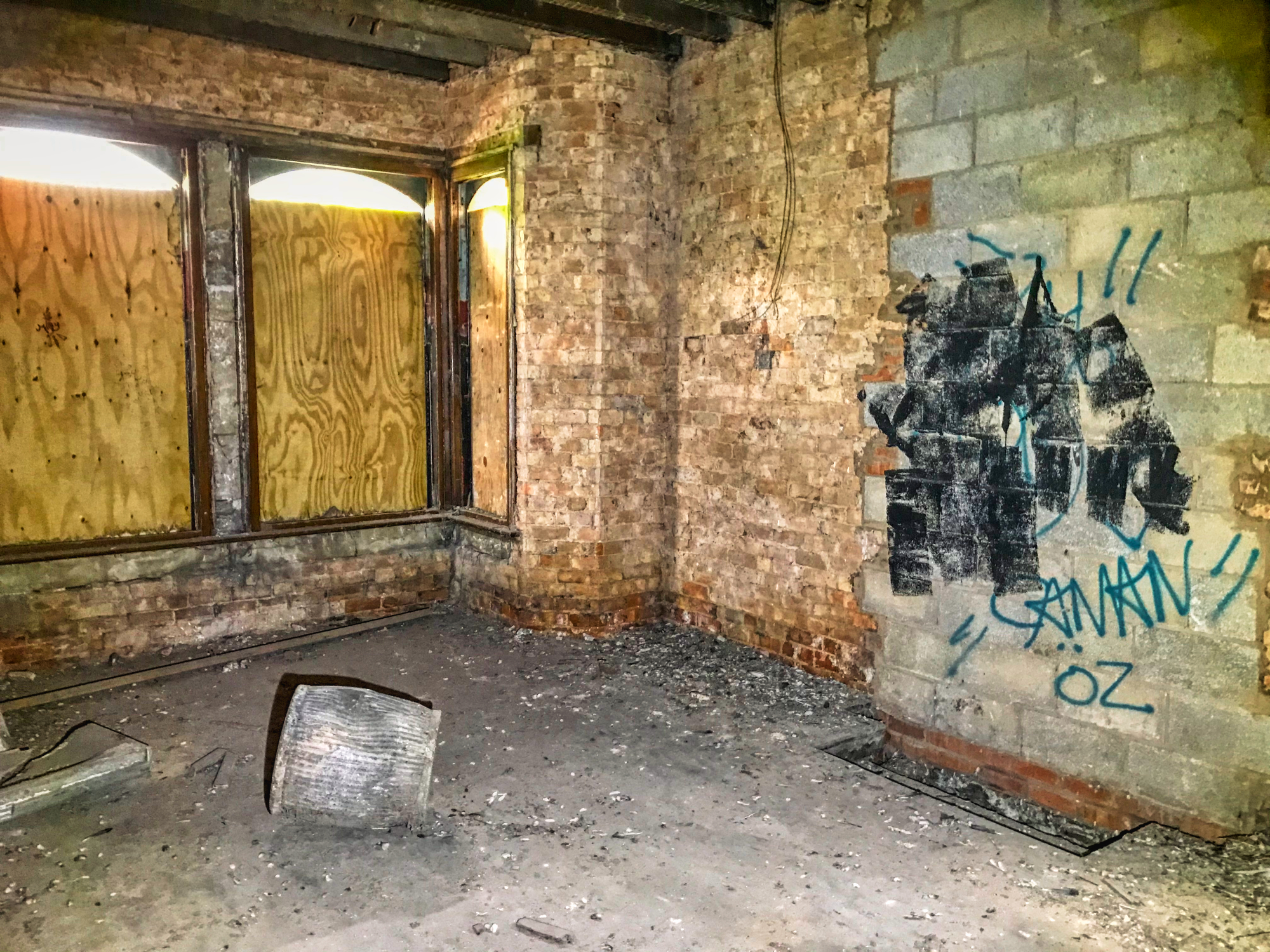 I sincerely believe cat burglars could use Urbex as a form of training before moving into a life of crime. This is not an advisory or educational post for budding thieves. 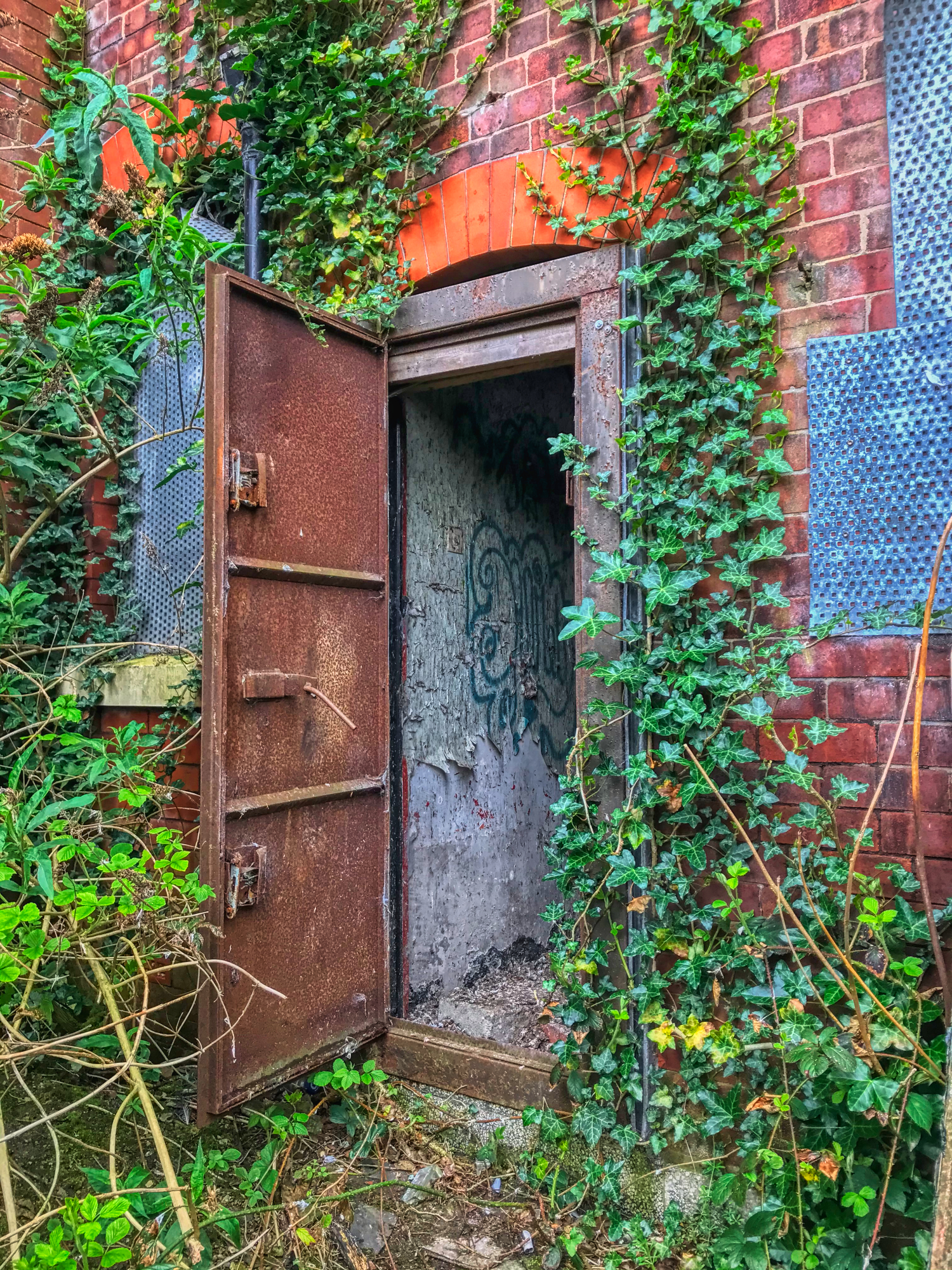 If you have managed to read this far and believe that the manor house is actually named Pigeonshit Manor well you can blame @anidiotexplores for the colourful name. 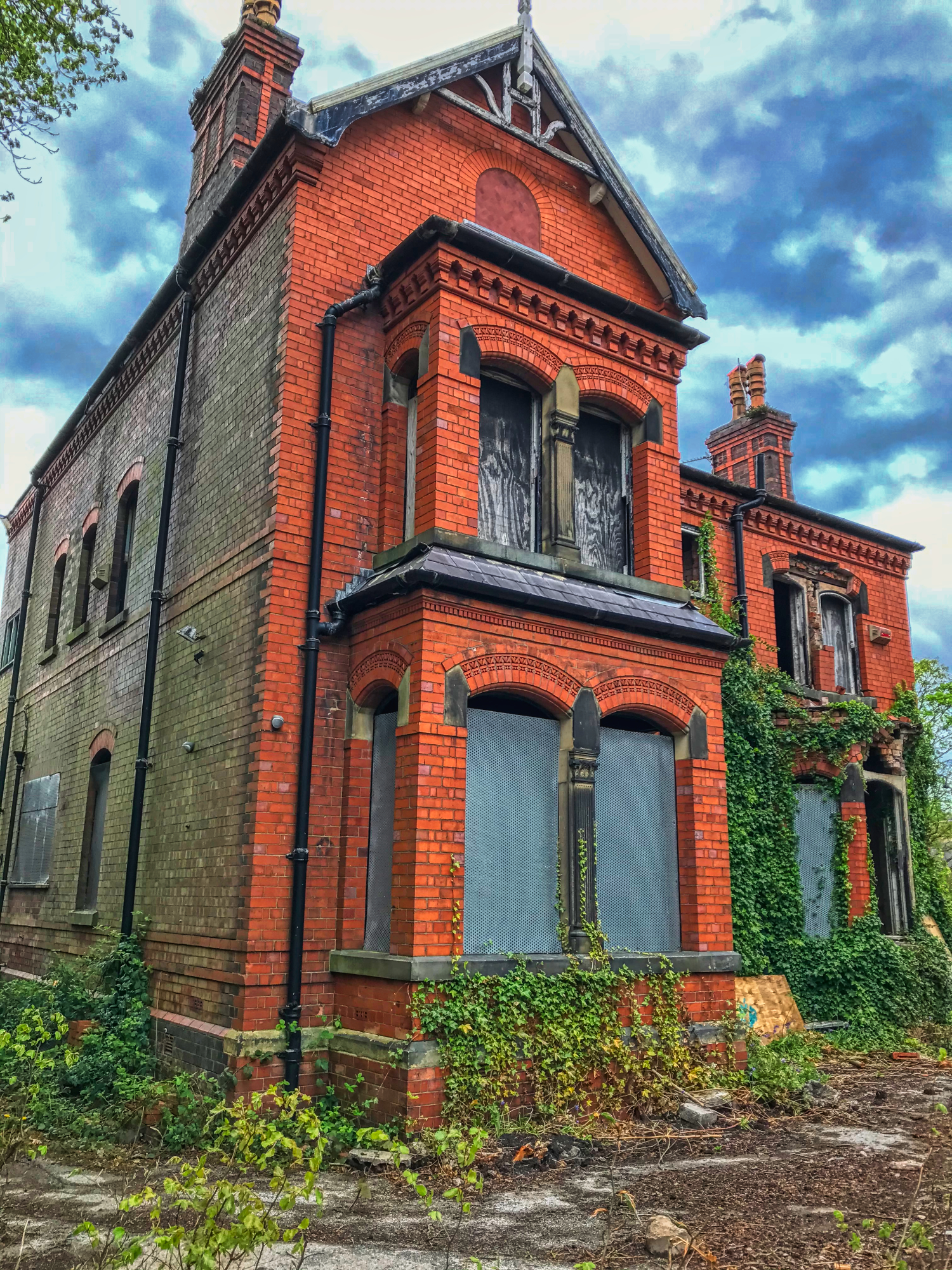 I would rather the real name be kept a secret thus securing some level of anonymity. It's the derpiest of derps and could well be a large pile of bricks by now unless by chance it is Grade Listed.

I thought the name... quite apt!

I wonder for what the rope was used. And the bag, seems like body bag. These two scenes are like from a horror movie.

Ah.. I have seen much worse than this old manor house. Ropes, chains, and dark grisly scenes.

Probably more so at night!

You focused on the loop of cord, but I was more interested in that window to victorian-era floor joist construction.

Drama has to take precedence over ancient construction methodologies... right?

Only if you're not a dork like me with an interest in architecture.

the outside of the house is beautiful, it would be worth rebuilding the place and using it as a museum or even as an orphanage or a home for the needy.

I visited one last year with a similar design but in a much worse state. Sadly it has now been demolished and is no more. I hope this one gets renovated. We are losing more and more of our history.

I love those chimmney pots, I bet they get preserved during demo, cost a fortune at a reclamation yard.

Just to put your mind at ease, if you come down with a flu like illness don't poop yourself, its not the covey its more likely to be psittacosis, caused by inhaling spores from pigeon shit. (I have that head on again today)!

Psittacosis is uncommon in the UK, with around 50 cases each year in England and Wales.

@techo3
about 1 year ago

the way you described everything just made me wanna read more :)

Looks like it was a grand place in its day, but has been left to the pigeons. Given the crappiness of a lot of new houses I would think someone would want to do it up.

I wouldn't bet on it, there have been a few lately I have visited to find a load of bricks. It's quite disheartening.

I guess it depends on demand. With the high prices down here there could be profit in doing up wrecks.

Sudden pigeon encounter would scare the shit out of me in such place. That would be more bad than pigeon shit on me.
How often do you get scary moment or some scare encounters (burglars/criminals)in such spot during your exploration?

@slobberchops
about 1 year ago (Edited)

Many times they fly out in front of you. It's generally deadly silent in there place, and the noise makes you jump. I rarely meet others on explores and never any threating types.

A couple of bits of four-b-two and lick of paint, and it's be as good as new!

The house looks great from the outside! Its abandonment is given out by boarded-up window openings.
I think that this house was magnificent inside in its best years.

The photos are simply amazing.
Thank you for showing us this.

Honestly, I cannot believe how many estates they tear down here. Im appalled that they are not interested in preserving history, especially as the build so terrible now. The materials are inferior ! I am surprised that the historical society or preservation society doesnt notice tham disappearing from the landscape! It is gorgeous!!

It could be a listed building, there was no history on this one. If so it can't be demolished, but I would not bank on it.

Thant you for the tour @slobberchops, loved the 'name' of the house, so apt. I can understand why this once stately place would be demolished, the cost to restore would take a barrow full of money. I bet all that pigeon shit smells - my nose is still screwed up at the thought.

I cant recall it being especially stinky but I am used to the stenches I get in such places. TBH, they are generally not so bad at all.

As always, great tour. Loved the fireplace. I just hate seeing these old places with such great design go to waste.

Yes, that fireplace. The highlight (unfortunately!).