“There’s not much left besides the tower", suggested @anidiotexplores, following up with "and the staircase has been ripped out".

He was talking about Newsome Mills, or what was left of this Victorian mill that has been subject of repeated arson attacks over the last few years (so what’s new!). 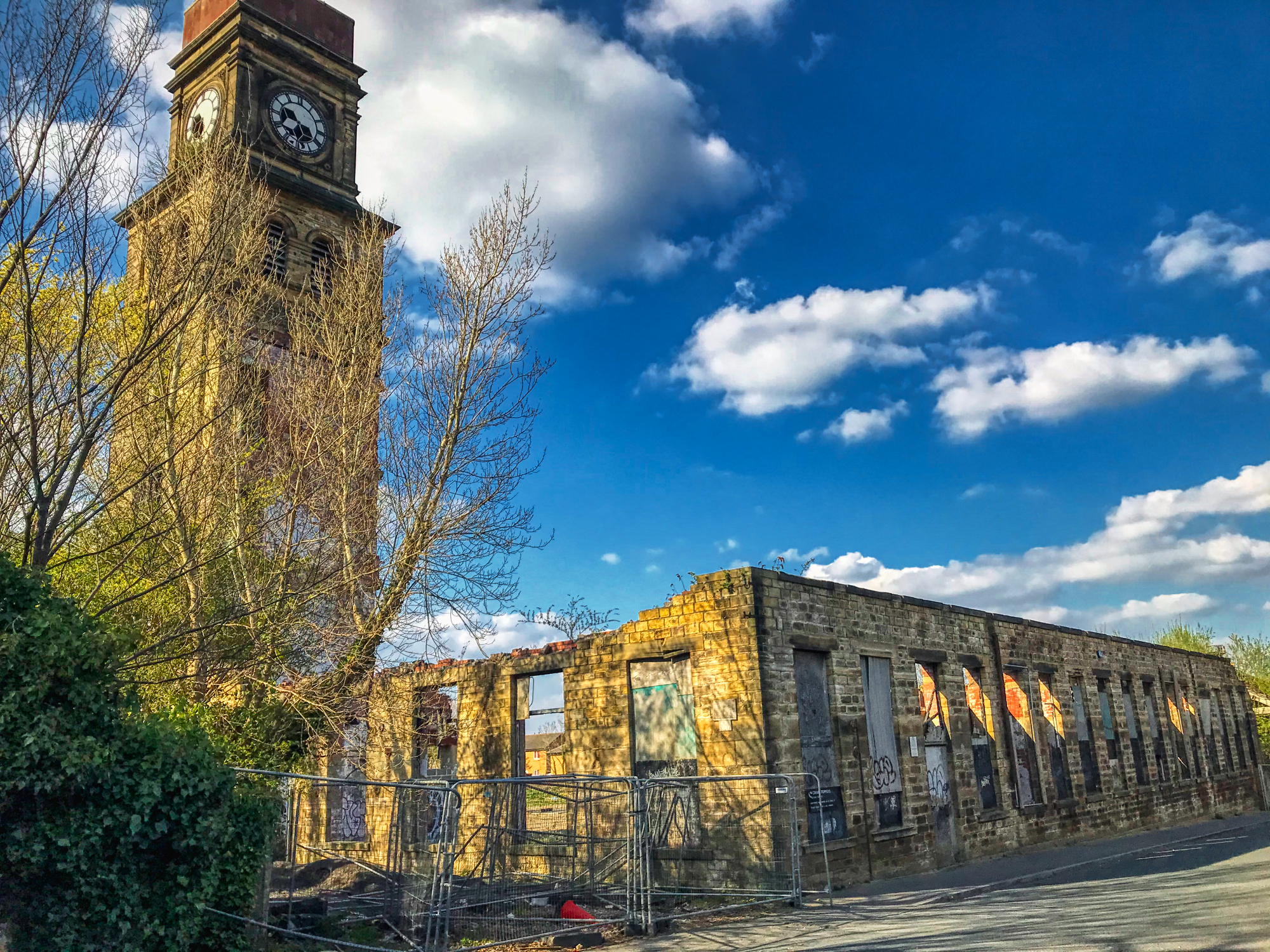 It all sounded quite crap but as we were passing by I figured it was worth a look.

I am reading the property is Grade-listed so why all the talks of ripping it down for new housing? In the past, I have seen buildings illegally destroyed but they have generally been off the beaten track.

They would not get away with demolishing that tower, it is far too iconic.

Standing beyond the gates of Newsome Mills, I looked at what was left. The tower was inside the walls, tall, thick, boarded and great for keeping people out.

Anti-climbing fencing was in place, but once again not quite well enough. We were on the other side in seconds and heard noises from within.

Kids…, I don’t like kids in derps as they are usually destroying them.

Sure enough, I could hear wails and whoops of delight followed by something being smashed to pieces.

This is when it comes in handy being partnered. Alone I would have walked away. 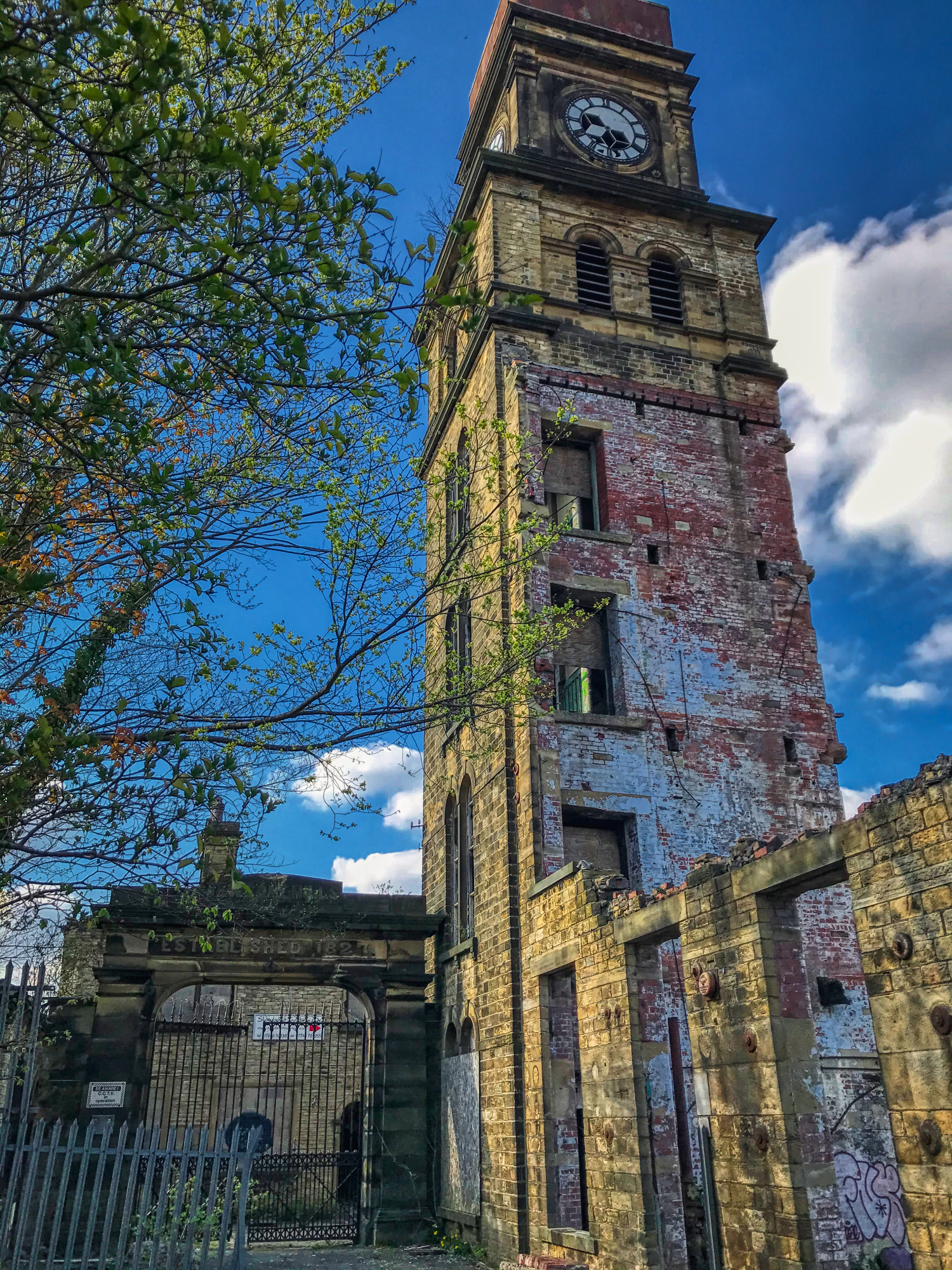 We poked our heads around the corner and spotted around four or five young teenagers, a couple of them being girls.

They froze for a moment but as we appeared nonchalant to their destruction it didn’t last.

"What are you doing?", one dared to yell over.

Cheeky shit..., you think you own the fucking place?

"Urban Explorers, photography", yelled back @anidiotexplores with an exaggerated pose of taking a photograph for good measure.

It appeared to work and satisfied they went back to their business of mindlessly smashing items in the old courtyard.

…’it’s like we need a fucking license, entrance fee or to reveal the magic word for admission’…

Passing under the old archway I looked at the carved etching in the stonework. ‘Newsome Mills’ it said to me. 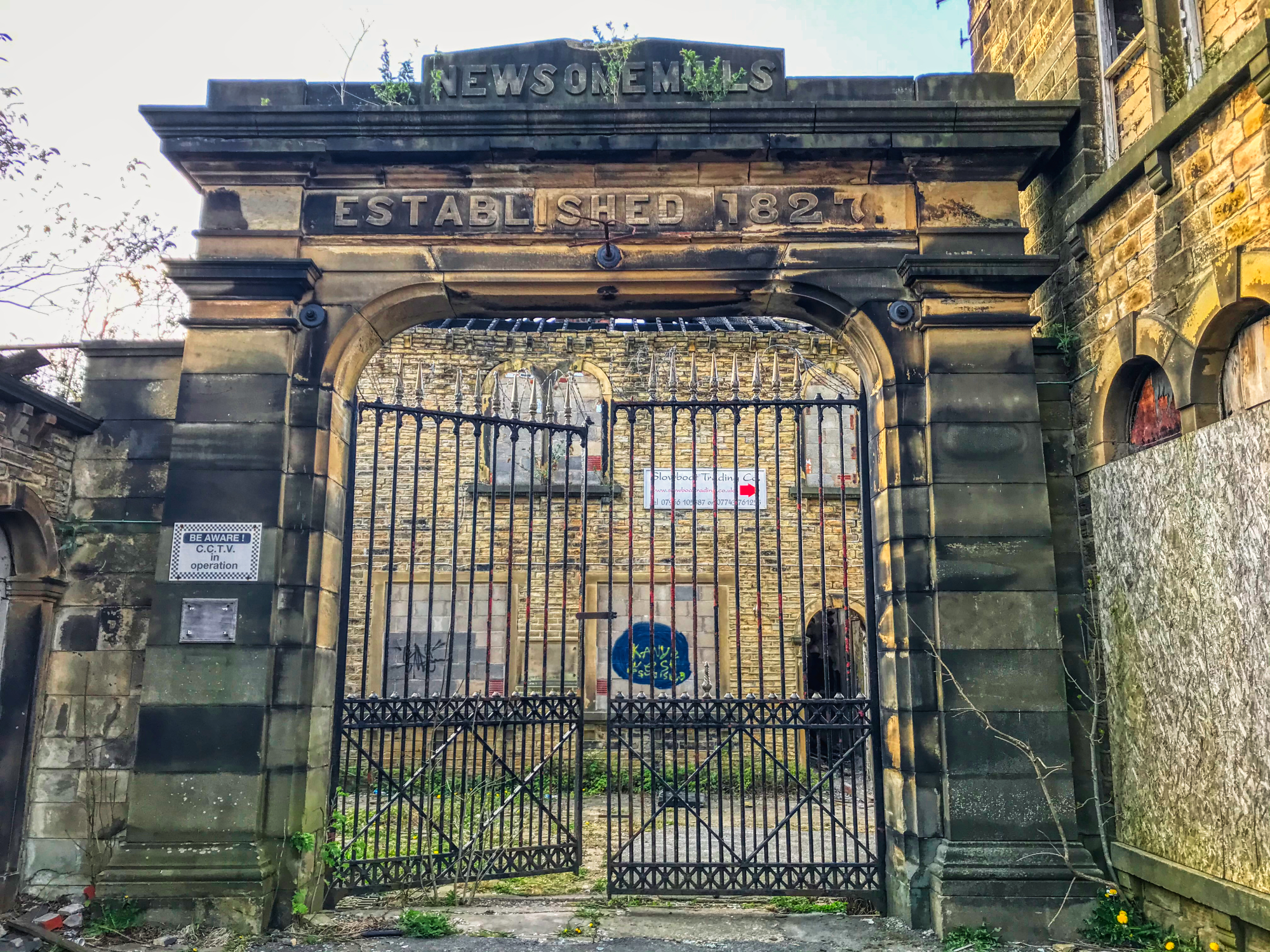 1827 is early for the industrial revolution. This was built before Victoria was queen. 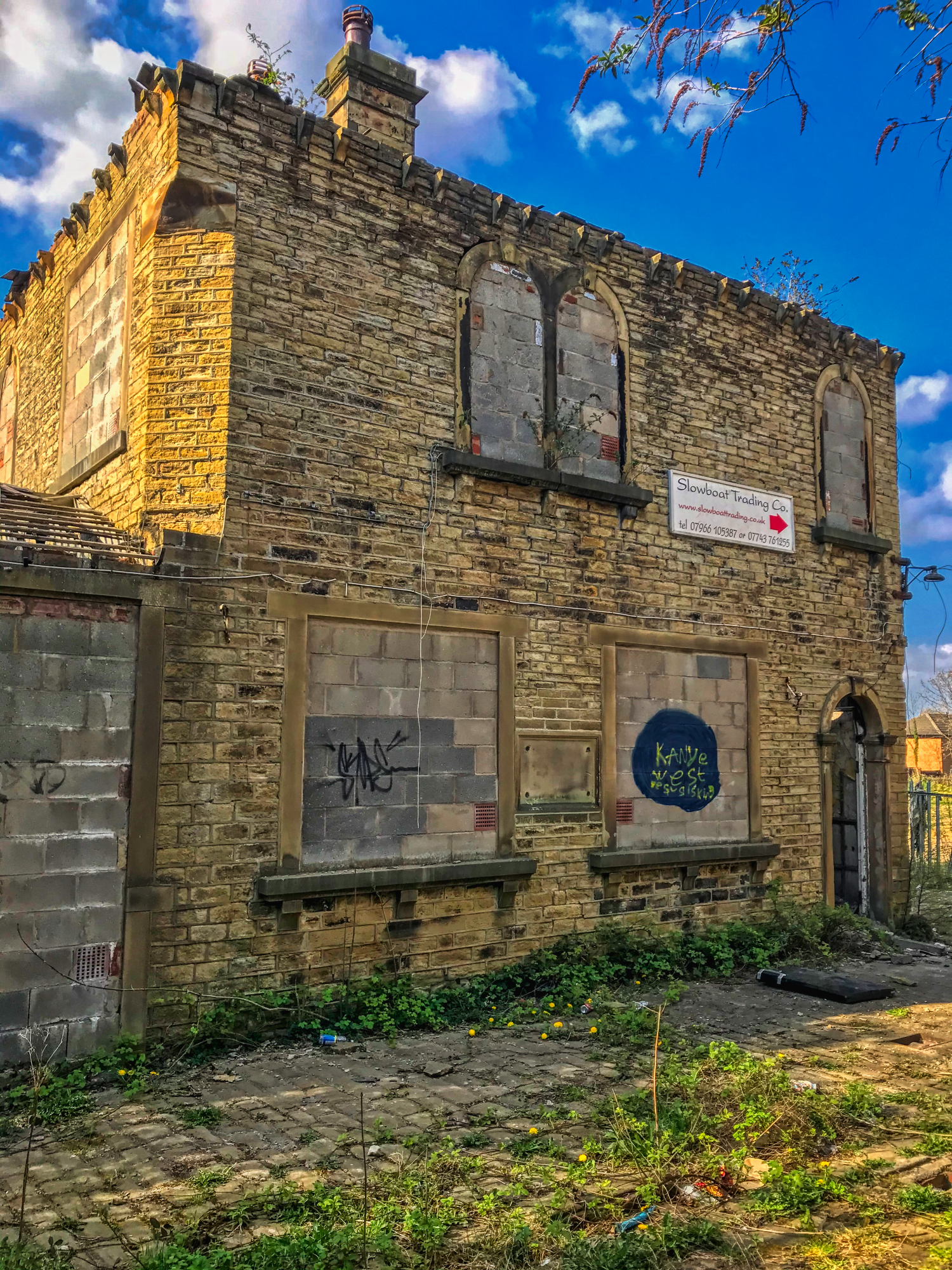 Within the grounds, I noticed Slow Boat Trading, another company that has gone under.

Unsurprisingly the website is down and the company lasted just 2 years before its collapse in 2005. 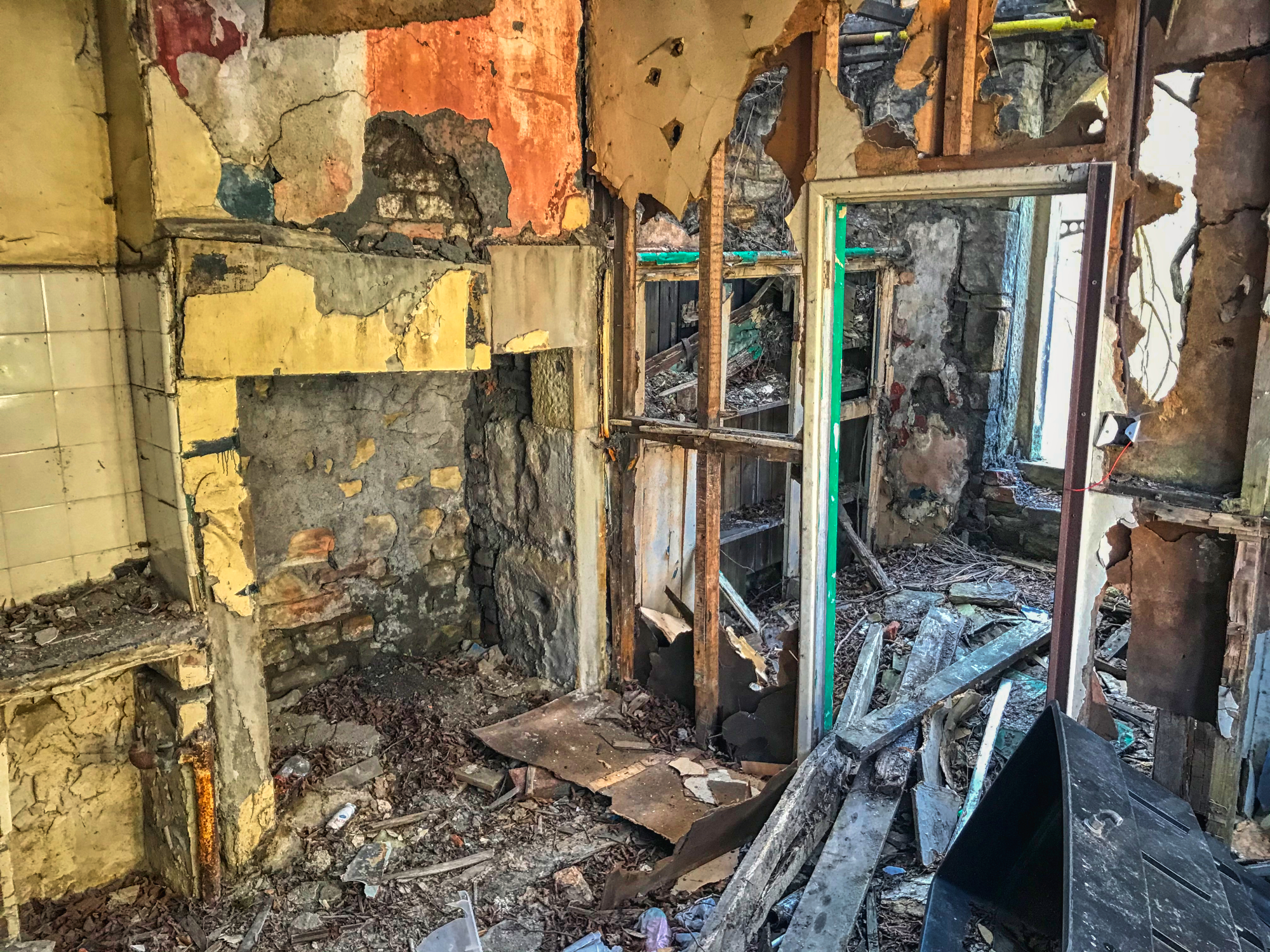 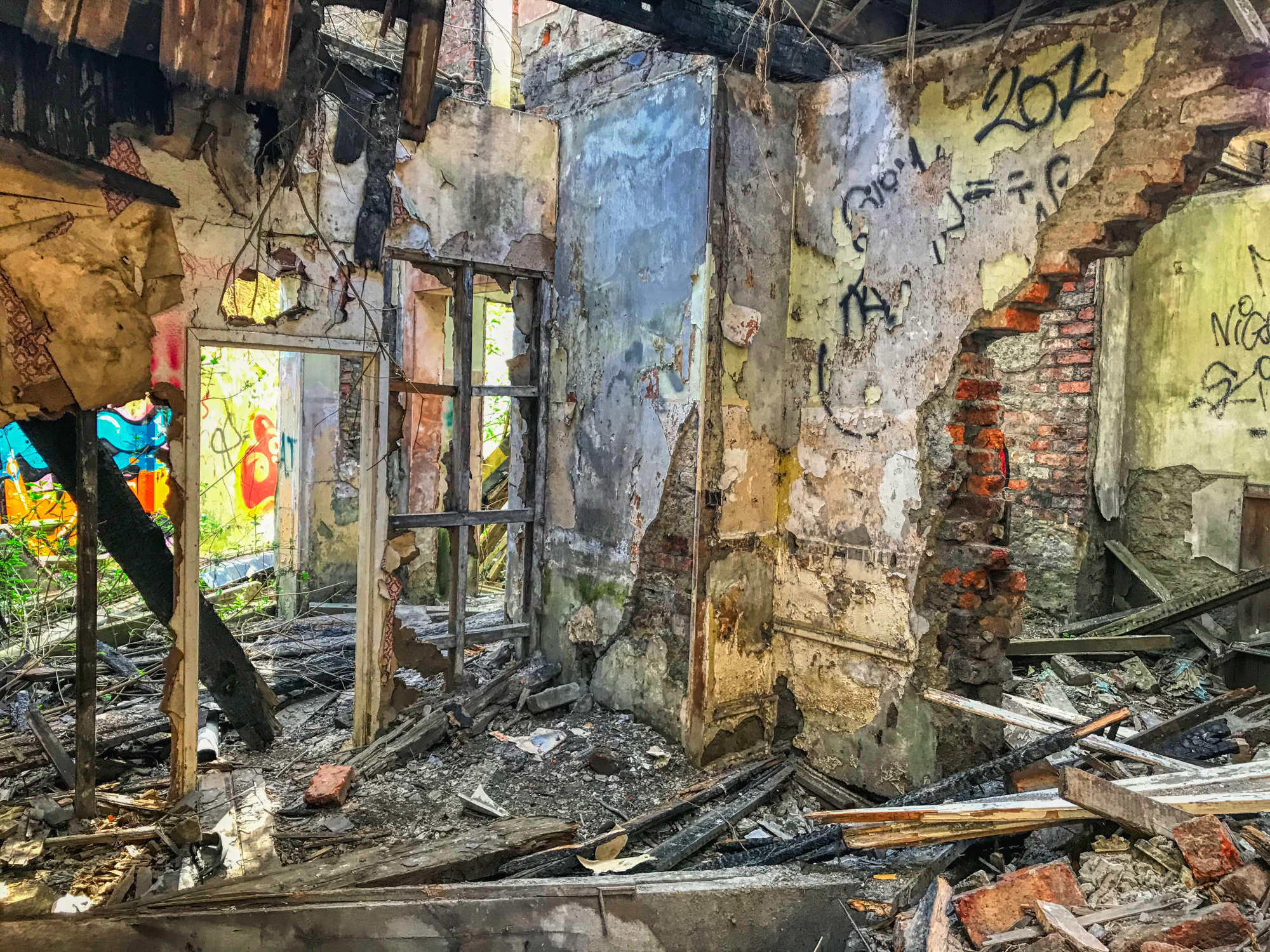 It gave me an idea of how long this inner building had been empty. Time had not been favourable and we found a derp of low standards within.

Getting around was not so easy; the roof had partially collapsed and there were many bricks underfoot just looking for a reason to twist my ankle. 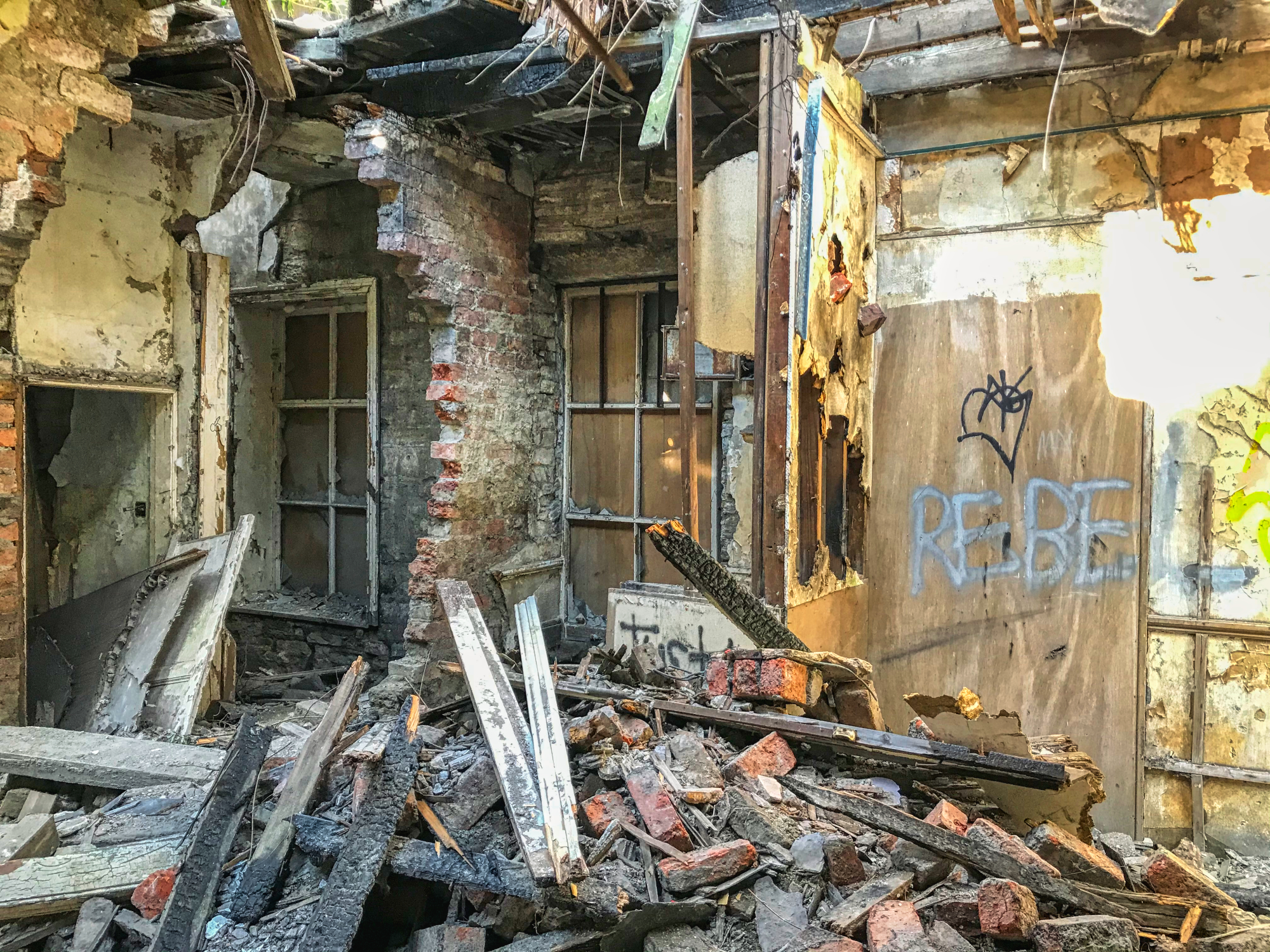 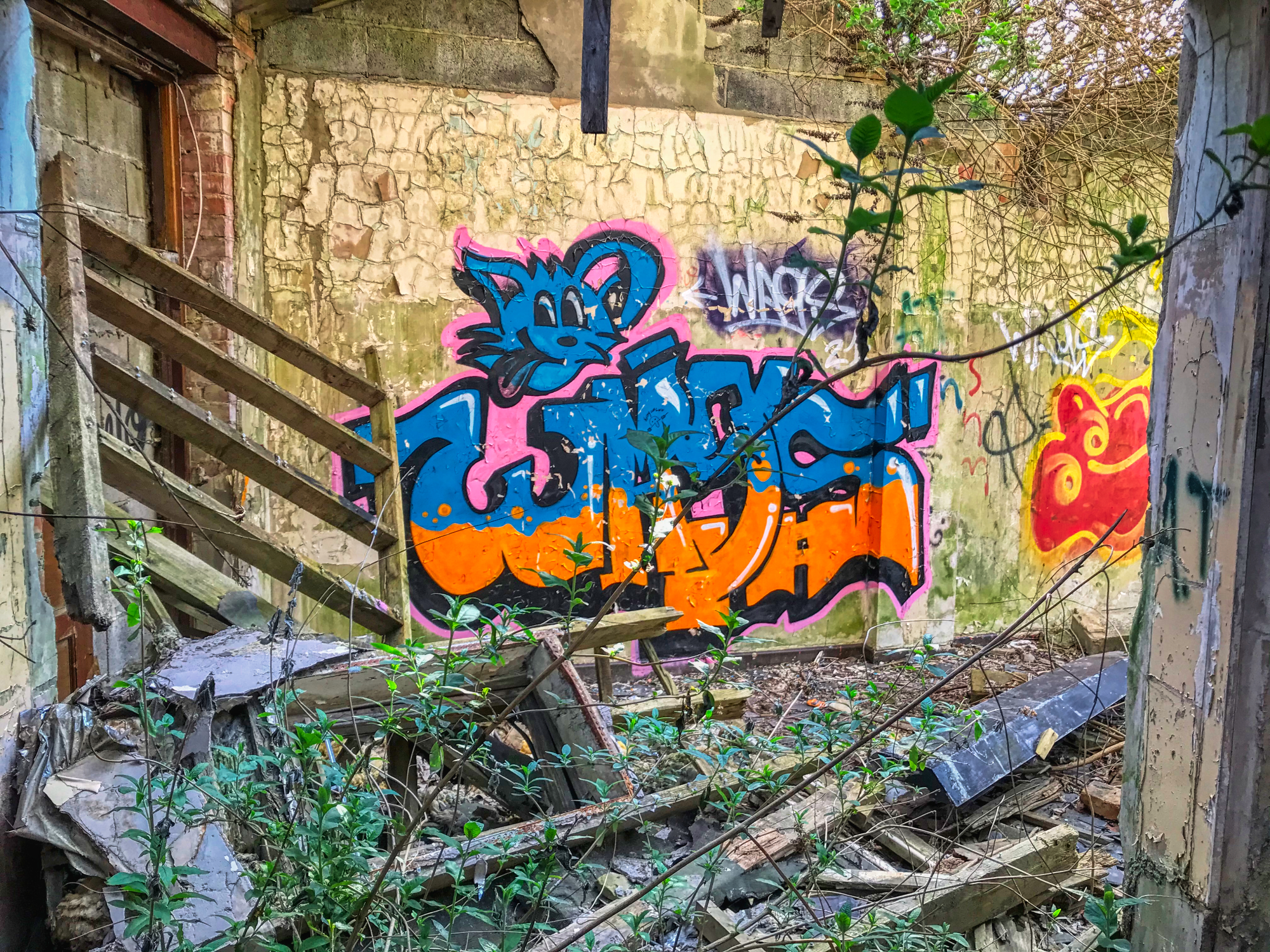 All was not lost; a little decent graffiti was inside. Does that say ‘Wags’? There are lists of these graffiti guys online and I should look some of them up. 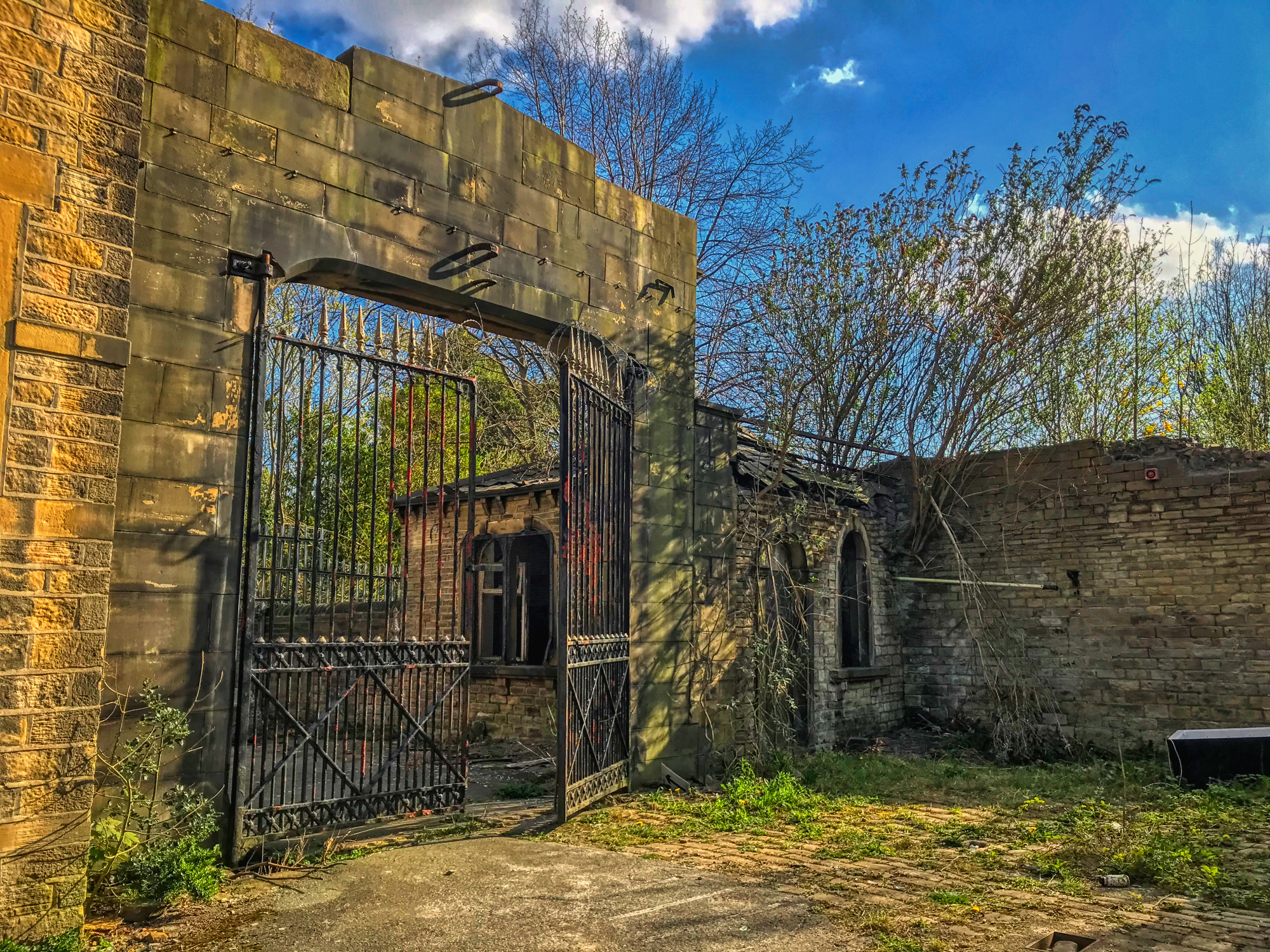 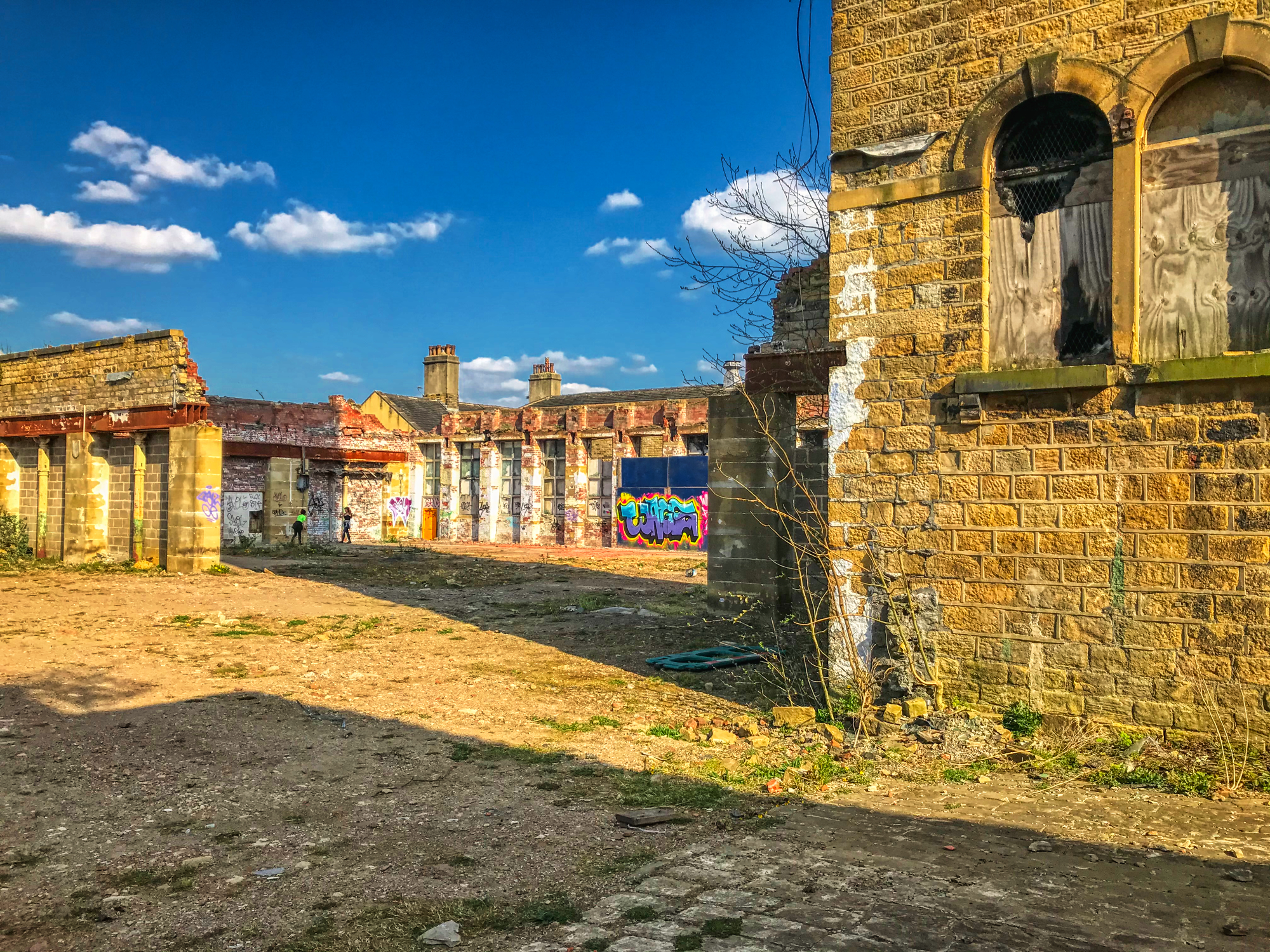 Neither of us fancied the old yard as those little blighters with sharp teeth were still mucking around within. 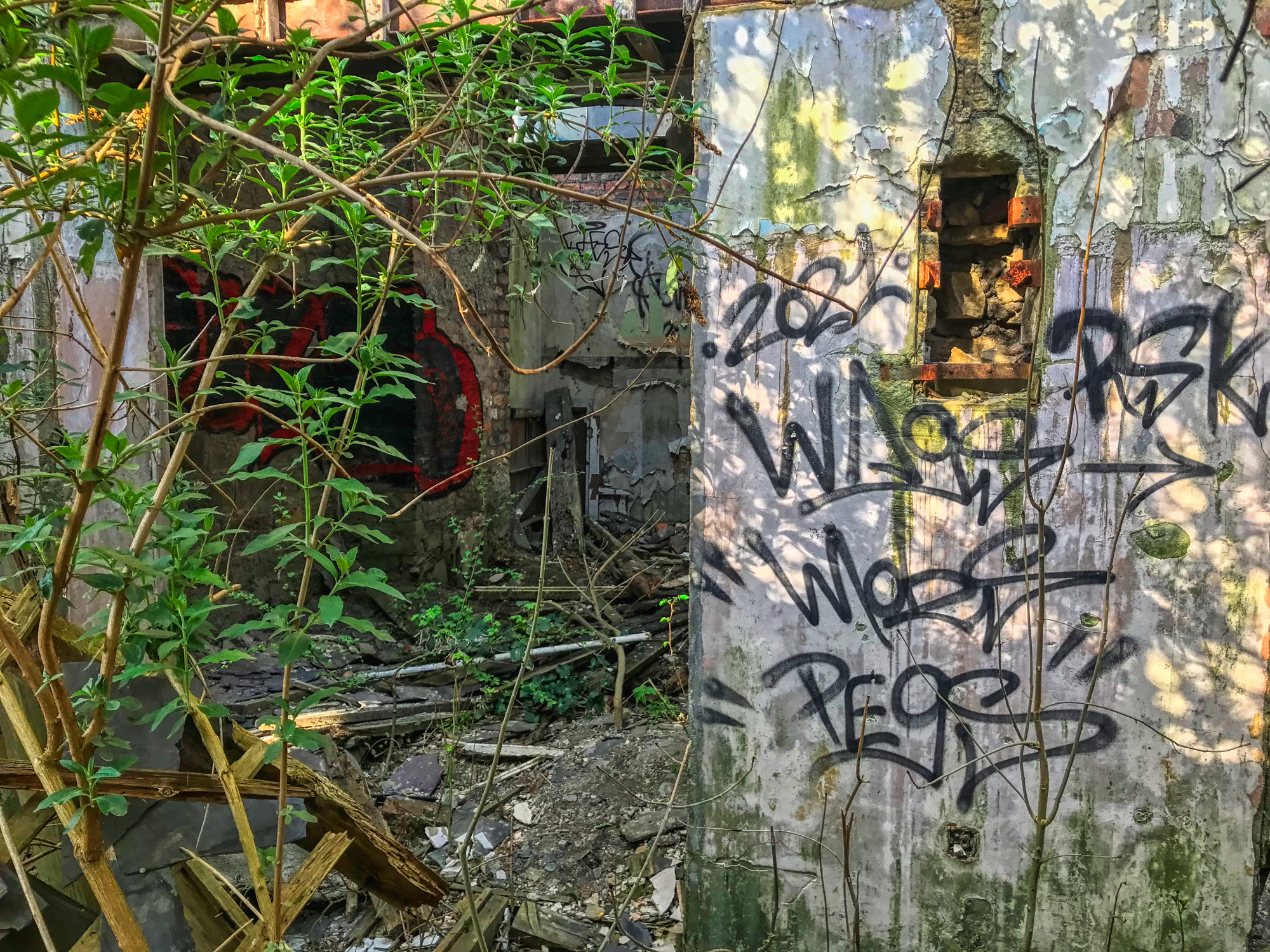 We made for the tower which I presumed was un-climbable. 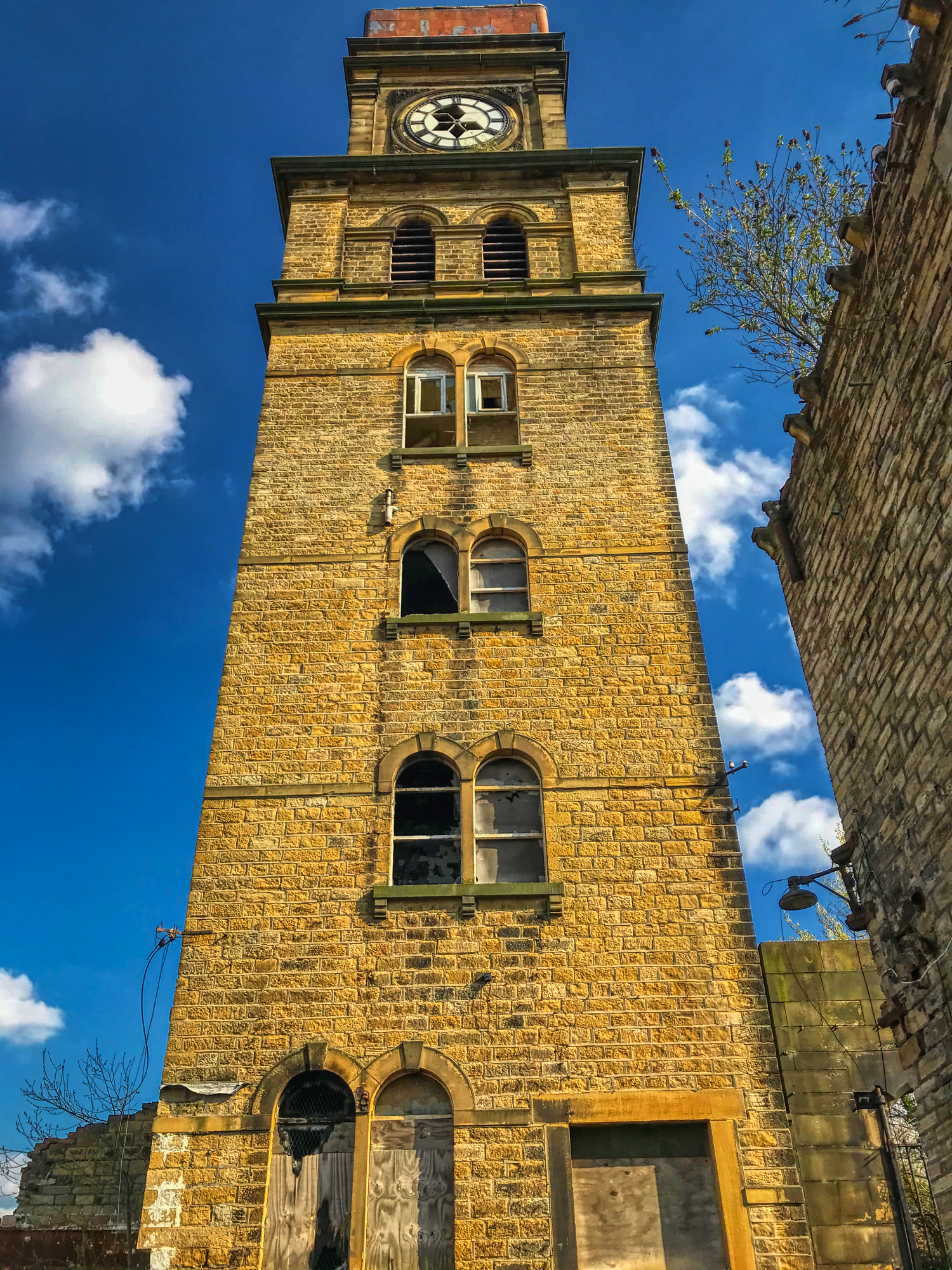 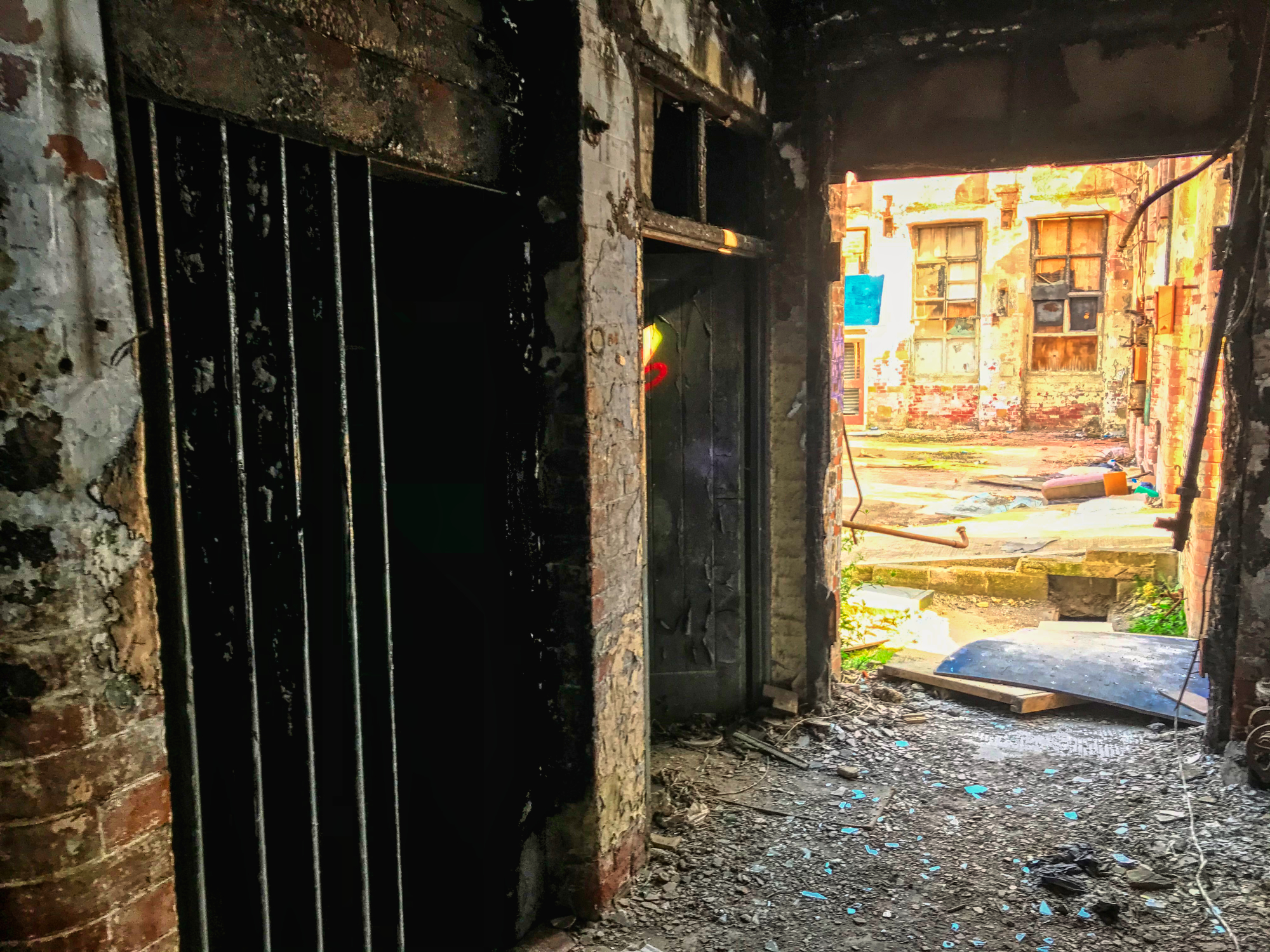 Except it was not; I had taken @anidiotexplores literally about the stairway. 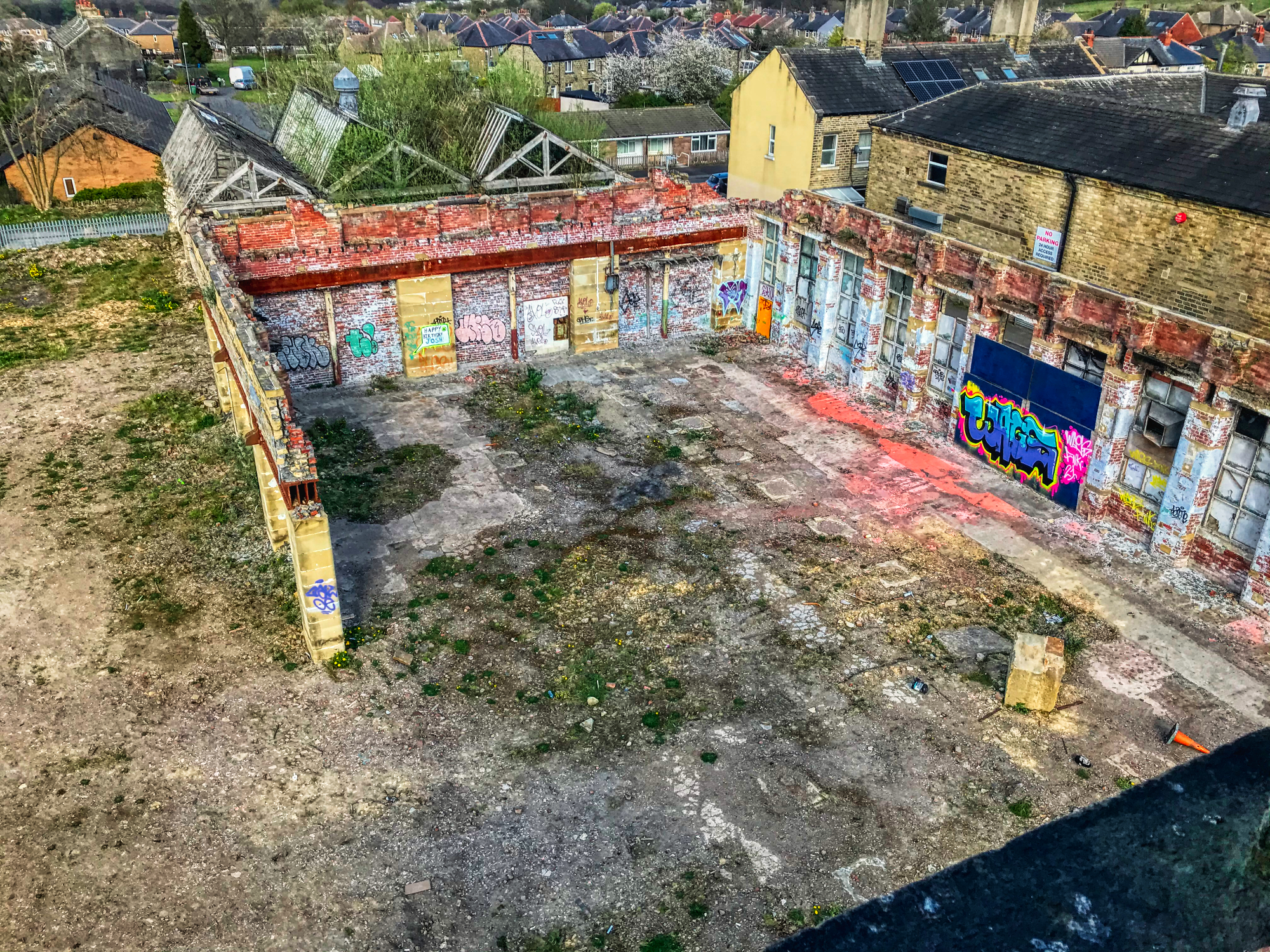 Only the top part is inaccessible, the rest you can freely walk up. There are no handrails and nothing to stop you from jumping out of the numerous holes, windows, or doorways. 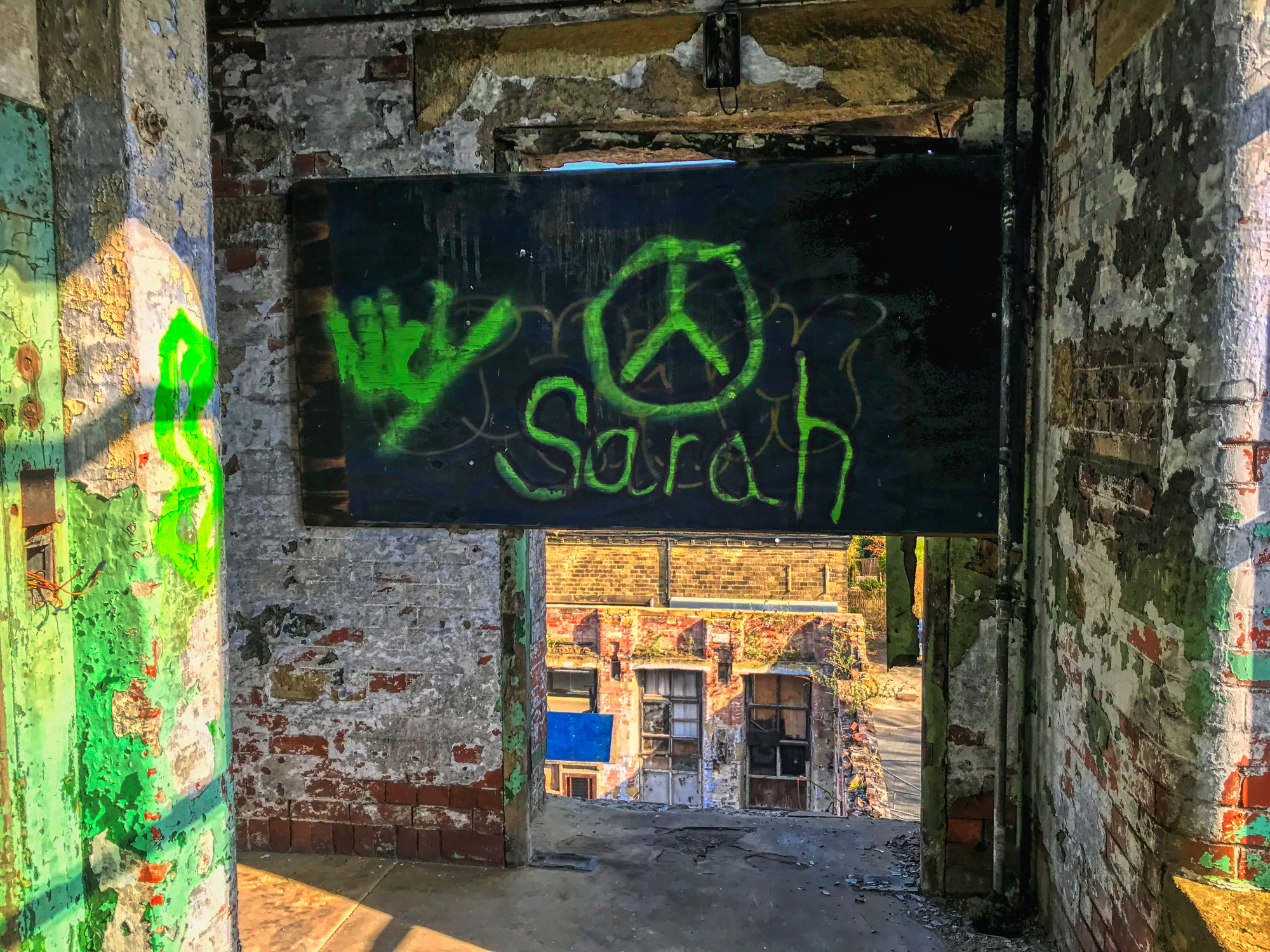 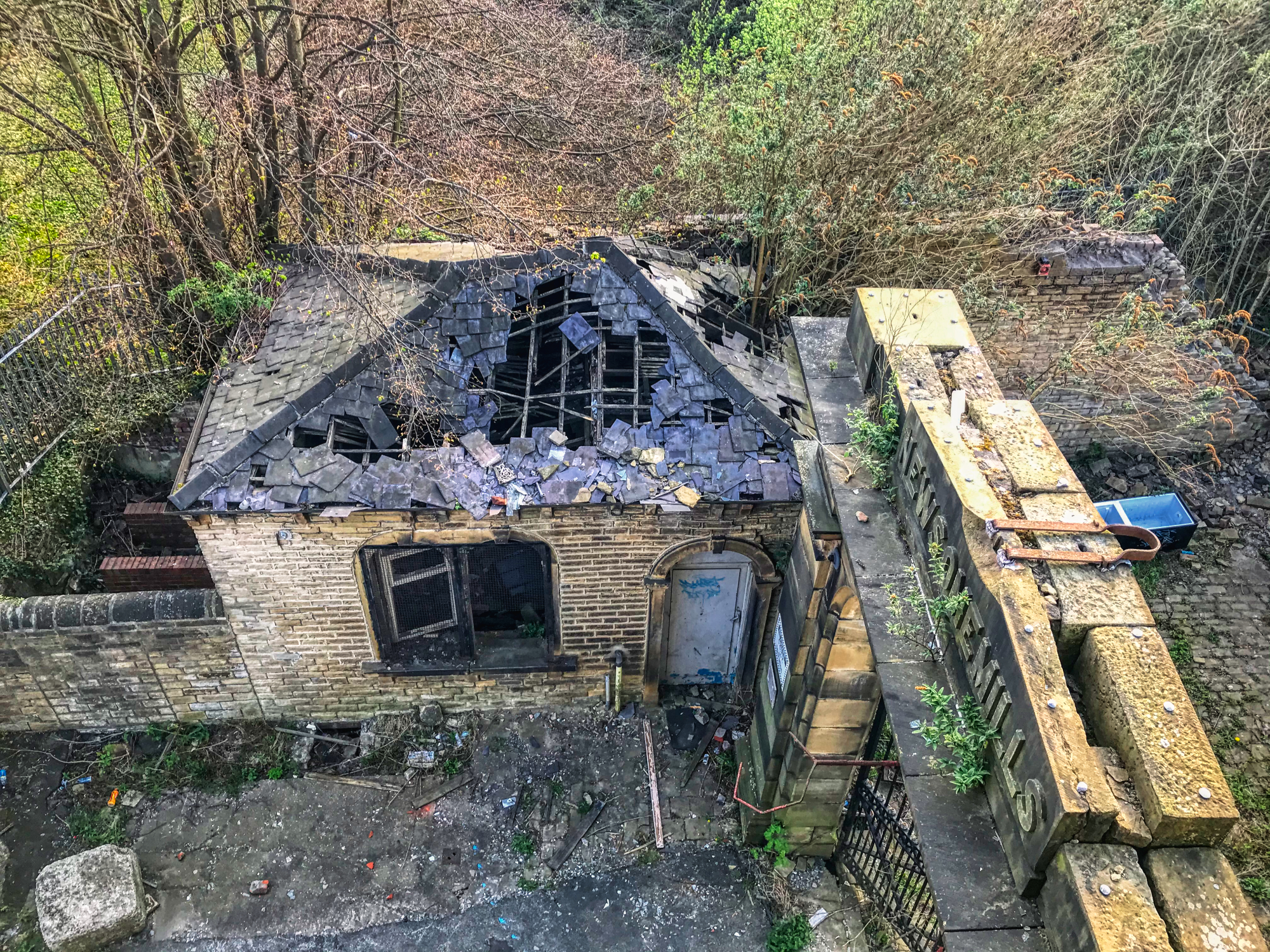 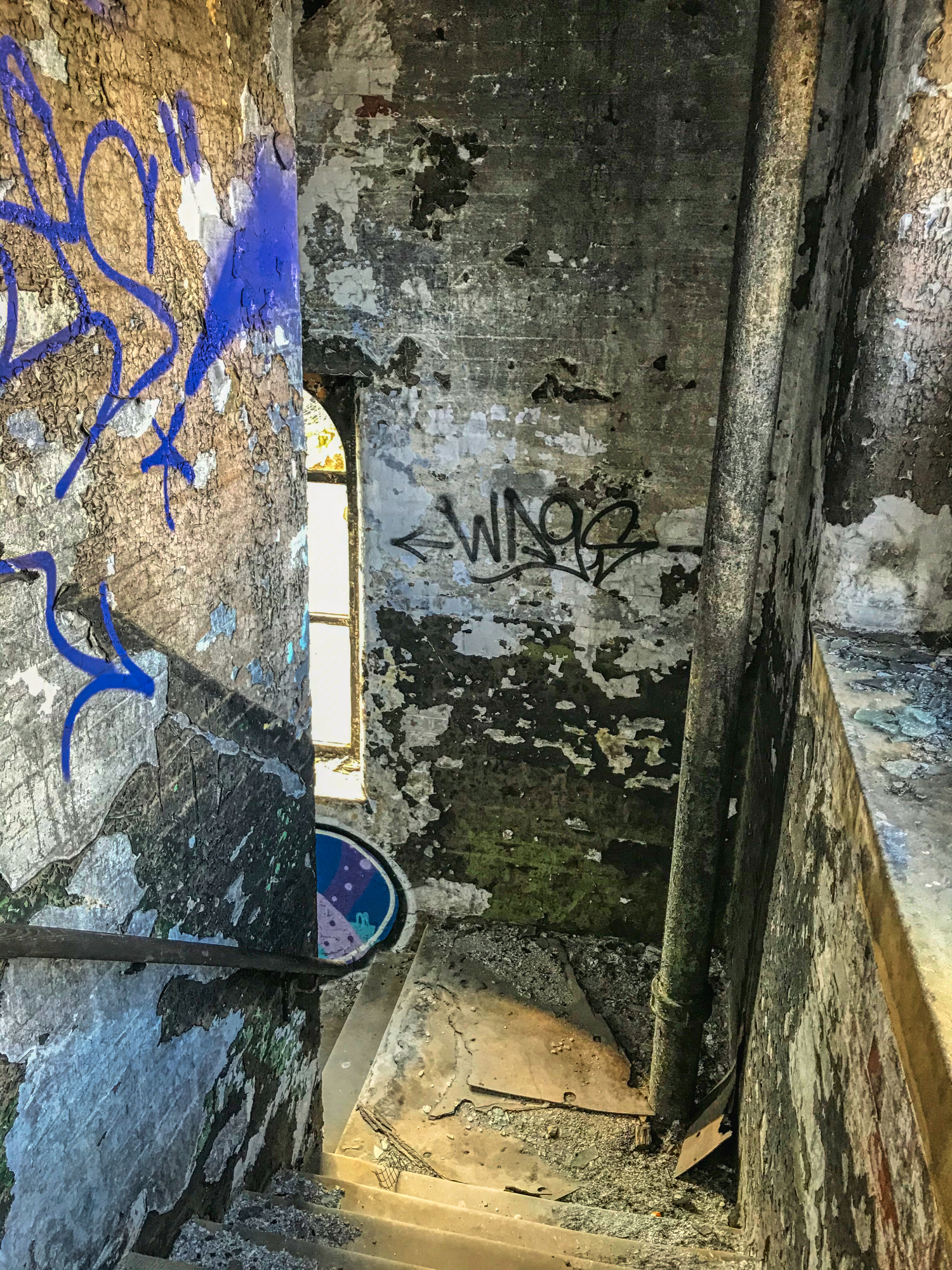 It’s best to keep back from any yawning gaps if you suffer any vertigo (like me). We climbed, going round in a clockwise direction until we could climb no more. 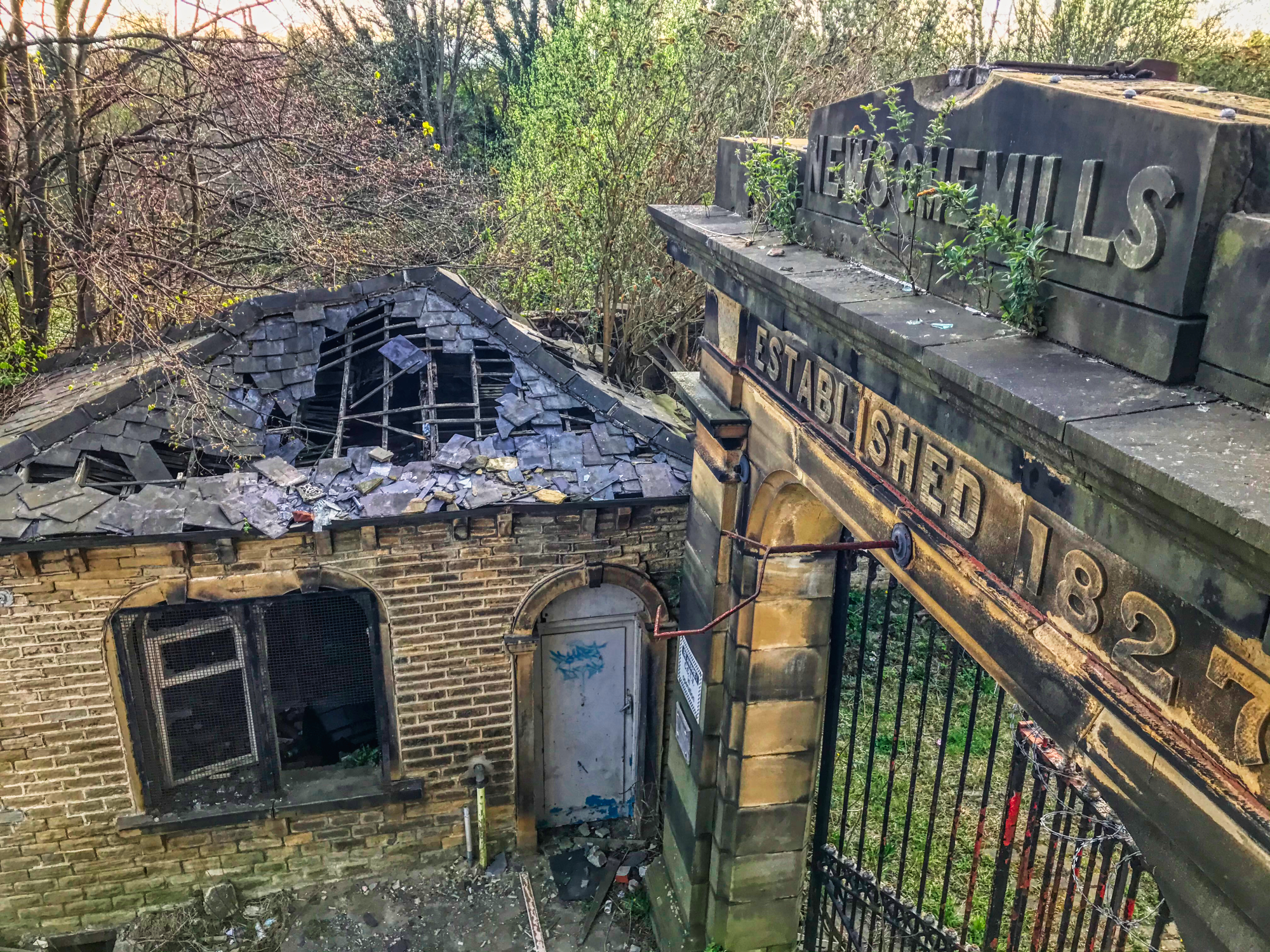 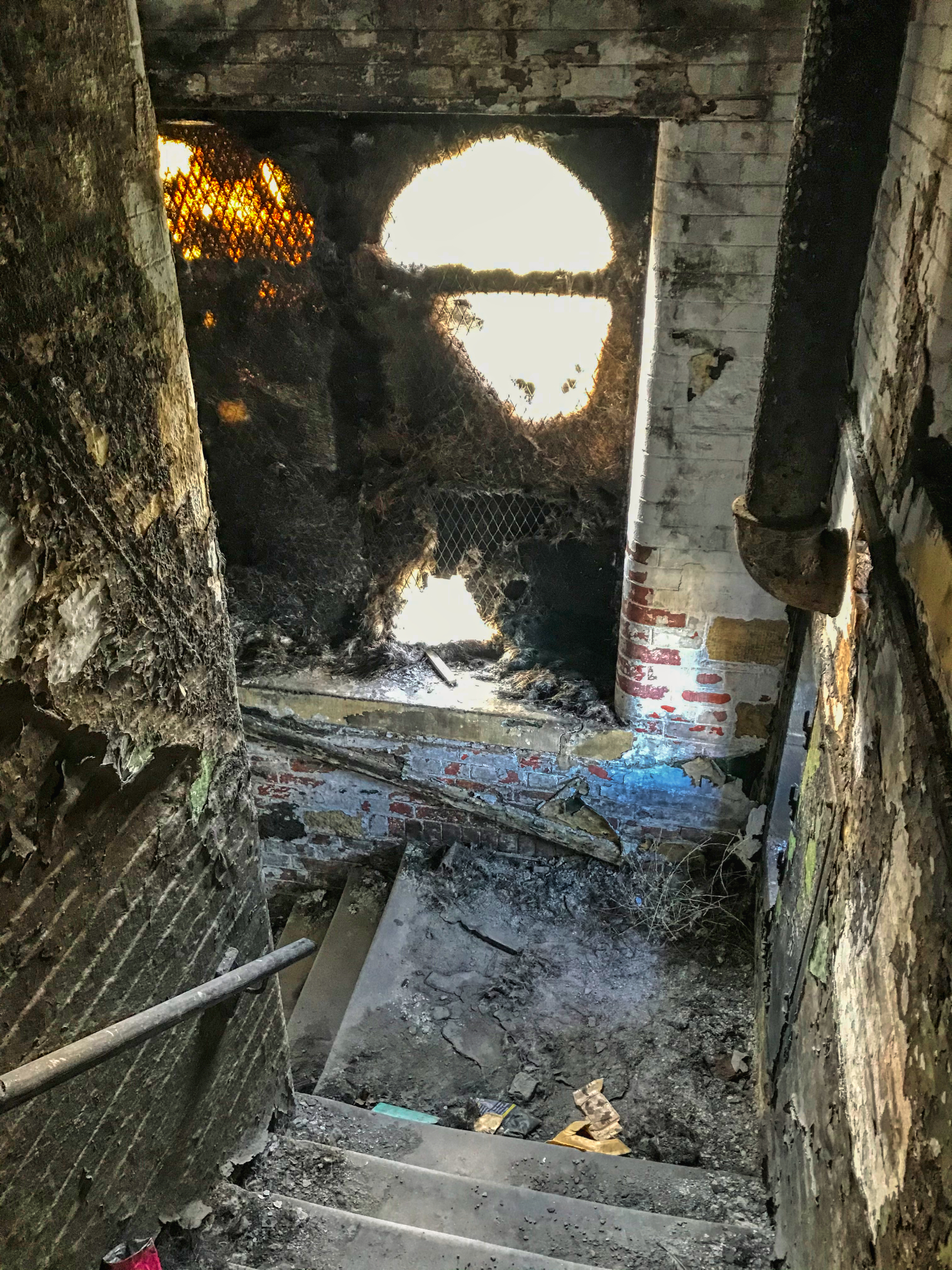 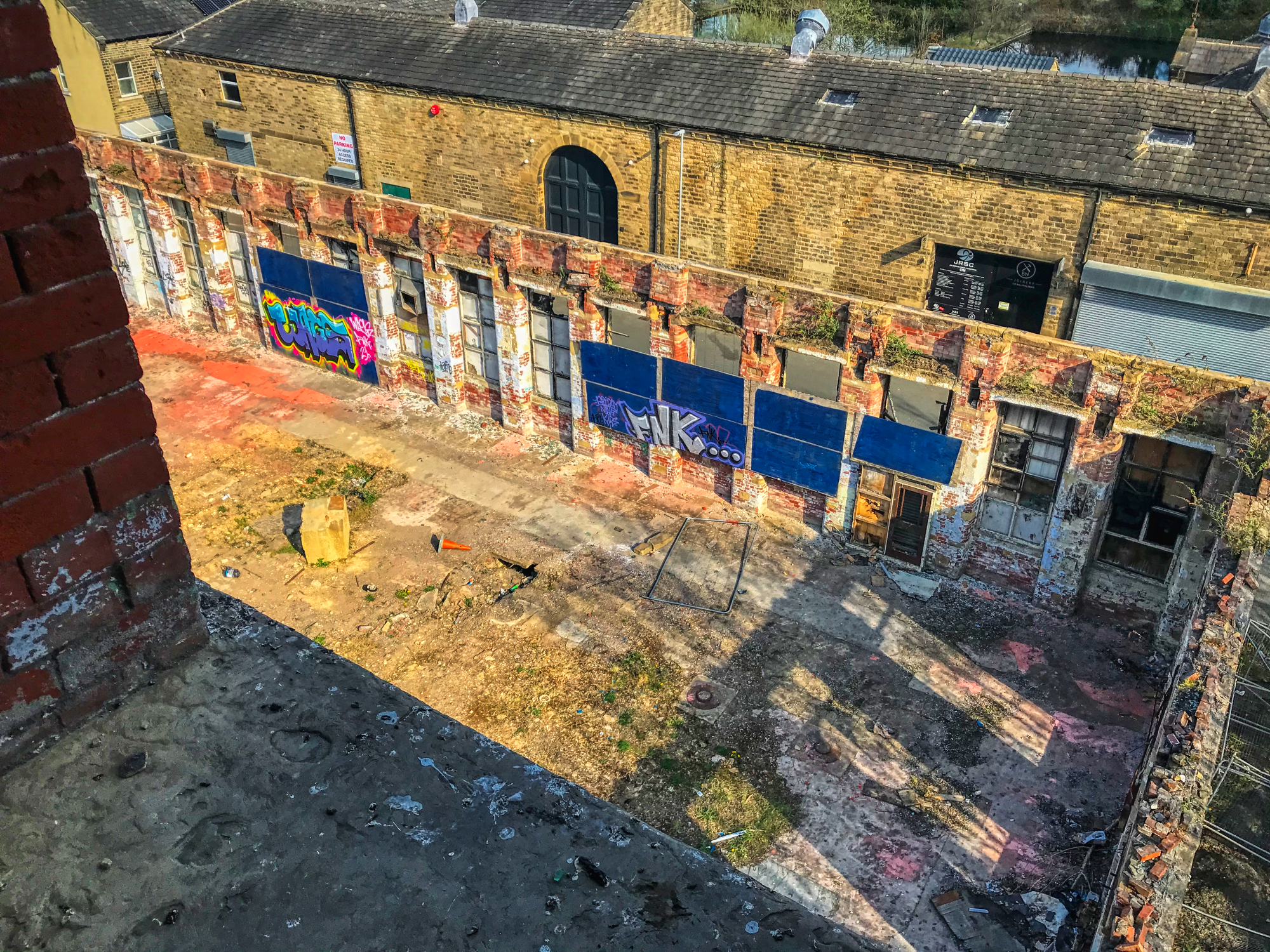 Looking over the edge was a large drop and if @anidiotexplores had suddenly decided to turn into a raving maniac and push me over the edge I would most certainly be dead.

Unless you are a great climber there was no way up into the bell tower. Someone had deliberately ripped out the lower part of the stairs. 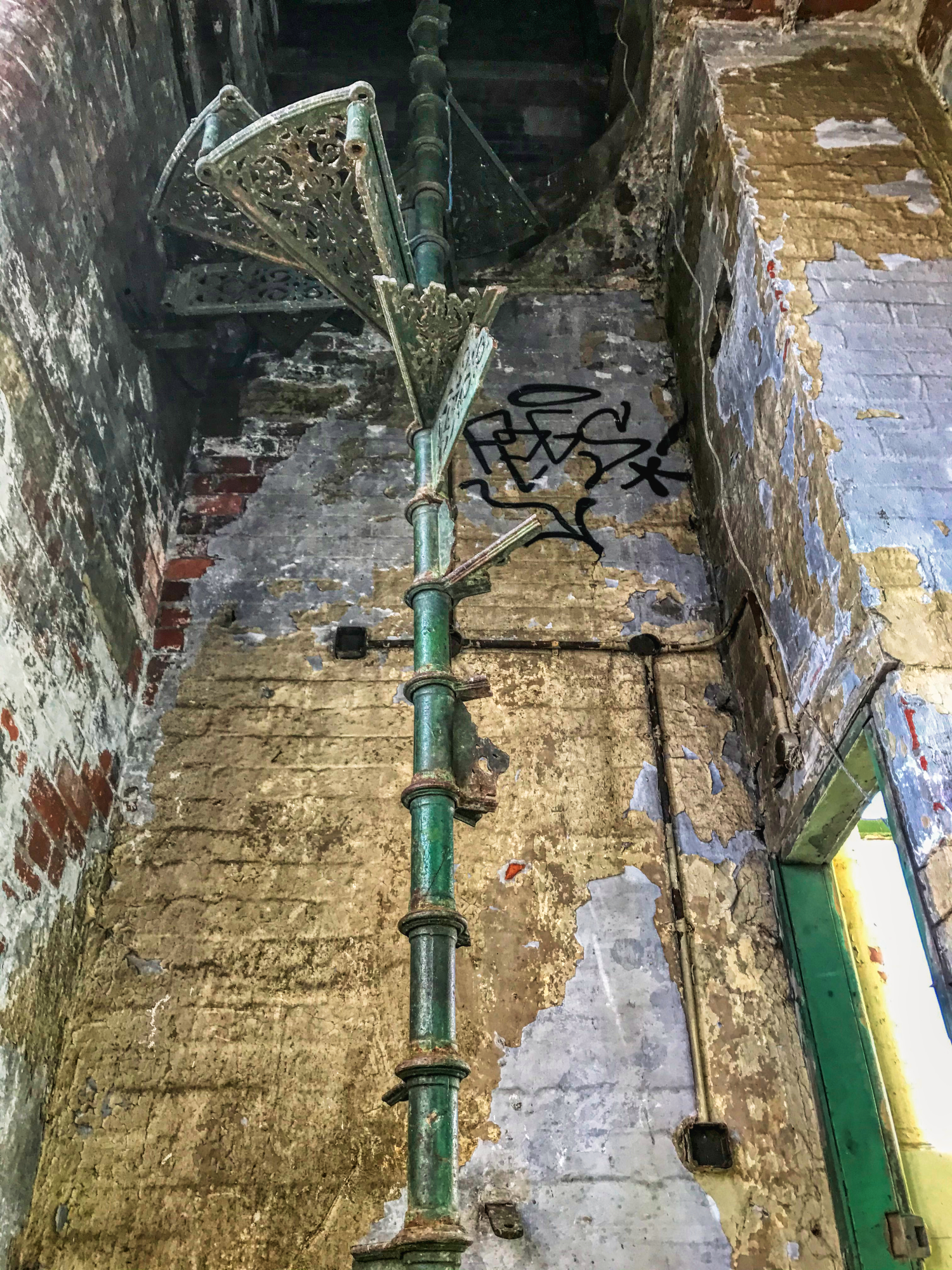 I didn’t look in the Men’s, the sights within may have scarred me for life. 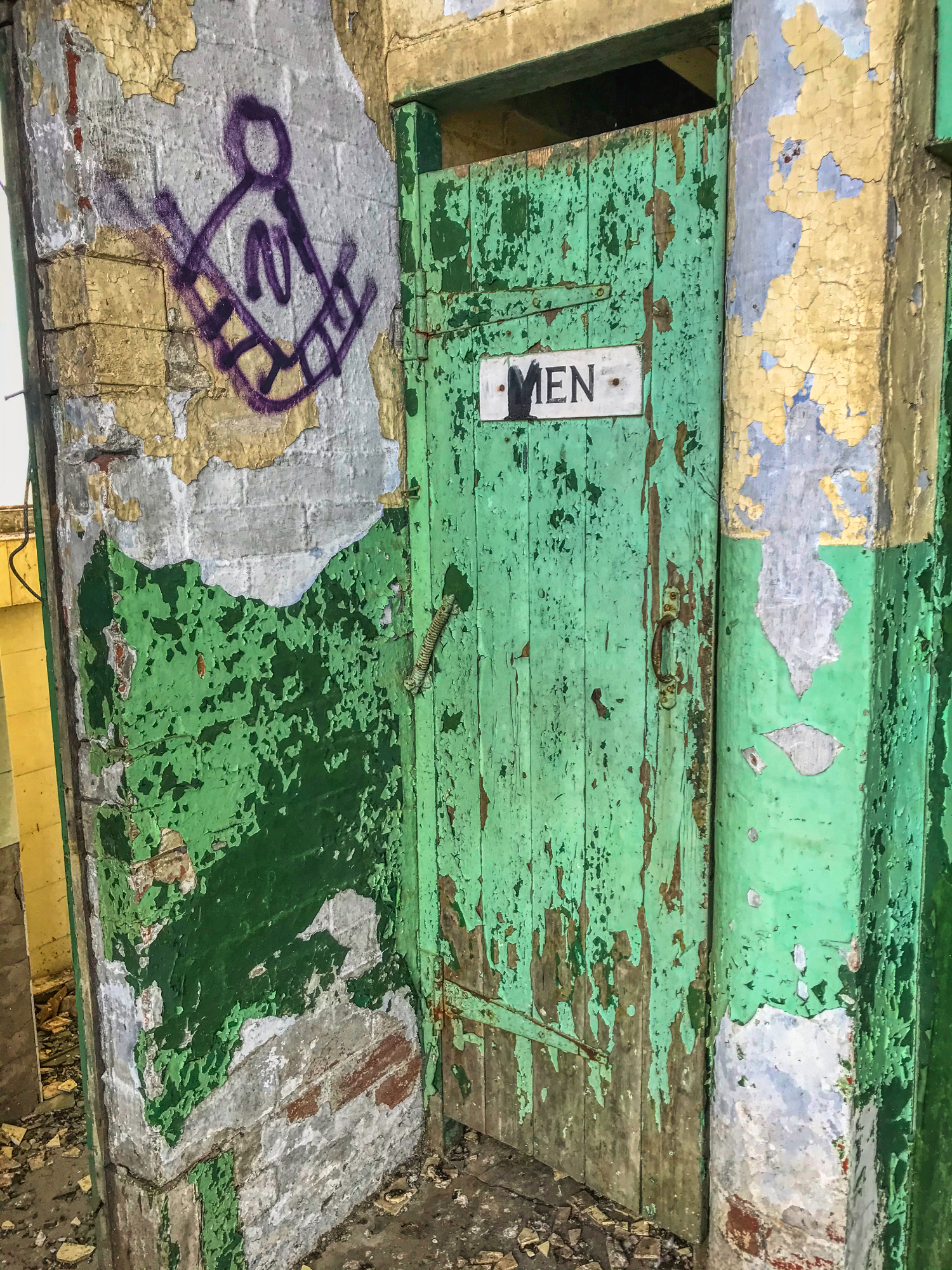 Descending, we noticed one of the teenage vandals struggling with what looked like an old CX engine-based Laser printer.

He was huffing and puffing but seemingly determined to haul this nineties technology deadweight designed purposely to give IT Engineer’s hernias up the many stairs. Source
...'the famous CX engine laser printer chasis, famous for hospitalising many IT Engineers who dared to try and lift it alone...

We arrived at the bottom and @anidiotexplores bravely started to chat with the brats. Seconds later, an almighty crash made us both jump out of our skins.

The CX engine printer smashed into pieces just a couple of feet from the both of us.

“Errr… sorry". A voice drifted down as both of us stared at the wreck of a printer, and then the lone slight figure five floors up who was a little red-faced. 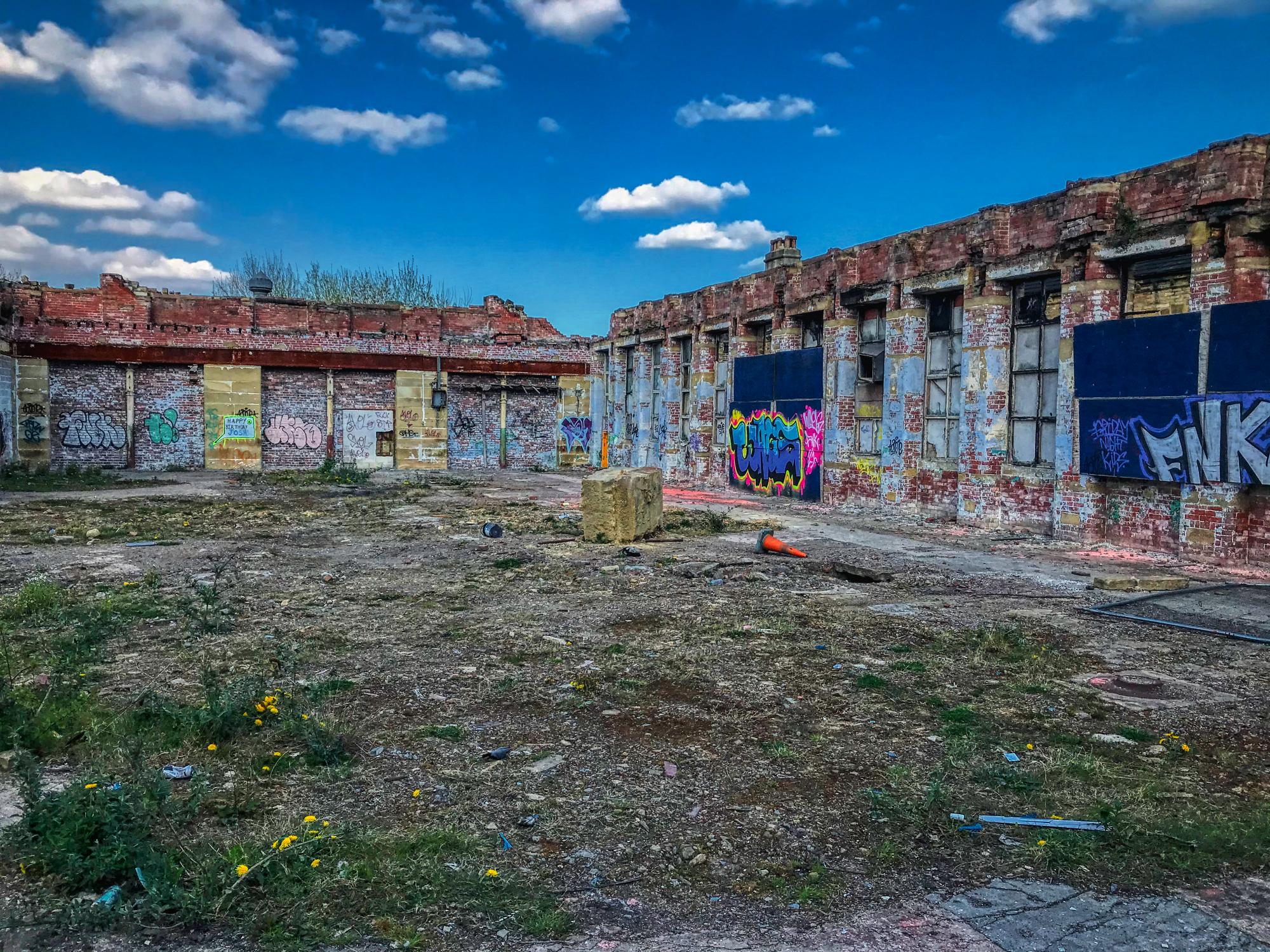 He didn't sound very apologetic about almost murdering us, and we were not going to make a fuss and be all 'adult' about things.

It was time to leave before one of us got killed by one means or another.

@poshtoken
about 1 year ago (Edited)

Another great explore mate, I've not been anywhere or done bugger all with me camera, wether landscapes or a little explore, work has kind of got in the way lol. Keep it up though, love reading these blogs.

Thanks, I'm back doing the UK stuff again now. Going out on Friday to do some more exploring.

It's not that bad. I'll fetch some four-b-two from the van and we'll have that sorted in a jiffy.
!LUV

The tower? Too high for me.. and very sharp edges on the metal.

I would have definitely tried on climbing up to the tower, doesn’t look impossible.

It was high up there, I would have had to give you a leg up!

@slobberchops I enjoyed every photo, thanks for sharing them. The tower looks stunning. For me the old buildings have a certain charm, as if my mind was transported to another era. :-)

I was surprised to be able to climb the tower. They generally lock things down like this. Incredibly dangerous up there with large open gaps. A strong wind arrives.. and it's bye-bye.

thank fuck the little shits are back in skool in a couple of weeks, I can get out and about again.
I cant be arsed mooching during summer holidays, i'm afraid i'd struggle to contain myself with a bunch of teenage gobshites.

Some nice "looking down" snaps

You have to hold your tongue and 'fit in' just to appease the gobshites! Remember when you were young, a few years before the Kwiksave Manager days? Bloody Kiwksave, that series is on hiatus.

Good one dude. I'm definitely up for getting back out, let me know when you are out next buddy.

Already did, next one after the next one.

I'm a fan of the mills - and mental hospitals- don't ask me why. I just don't understand teenagers today. I would have been very afraid if an adult confronted me with his presence and I was not supposed to be there. They are to stupid and disrespectful to take any polite action.

The tower was awesome! I expected a little shimmying!! :) Rhe pictures/edits came out great!

Mental hospitals are in very short supply. I tried one a couple of weeks ago but it had been boarded up. Was quite an adventure getting in the grounds, with @bingbabe accompanying me.. even she got a kick out of it. Will be featured sometime in the future.

I just stumbled across this now and there is something quite beautiful in your pieces. I must admit at first i thought, what shit is this. but i get. also a great hobby to have and exploring your surroundings. Inspirational in away. Reminds one to take a closer look. Will definitely be keeping an eye out for your posts from now on!

It's a way of doing shit that is not done anymore. No ties, no bounds, no organised parties, and it's legal (just). Suits an anarchic place like HIVE very well.

@mimismartypants
about 1 year ago (Edited)

Indeed. but definitely not safe for a chic like me to do on my own. Sometimes the lack of balls does play a role. I mean you have them and still wouldn't do it alone!

Plus I'm in South Africa. This is not Europe!

Take a friend with you, I don't generally explore alone. Too scary at a lot of places.

"Urban Explorers, photography", yelled back @anidiotexplores with an exaggerated pose of taking a photograph for good measure.

It would be more correct to answer: "fashion-photo-police you little shit. Your light green blouse will get on all the tablodiles." Of course, while preserving an exaggerated pose of taking a photograph.

I try and avoid teens if possible. Once we caught 20 of them in a school, they all froze, stared and it went very quiet. It was not pleasant.

Damn, they're really pretty creepy creatures, something in between children and adults... I've never understood them.

The tower still looks good comparing to the other parts of the building. The inside of the building is a real wreck, it is possible get some injury like twistling ankle. However you have done a good job as always.

Dangerous as hell just like normal. At least the tower has to remain. They can modify the mill and the tower may turn into weird housing at some point.