Tales of the Urban Explorer: Ministry of Supply Munitions Factory

I had no idea what this was until we arrived. A large section of dense trees with a couple of buildings on Google Maps looked quite suspect and so I noted it down for a visit.

On arrival, we had a lot of trouble getting close to the target and after a traipse through some wet woodland following an unending section of unyielding pallaside fencing we were about to give up. 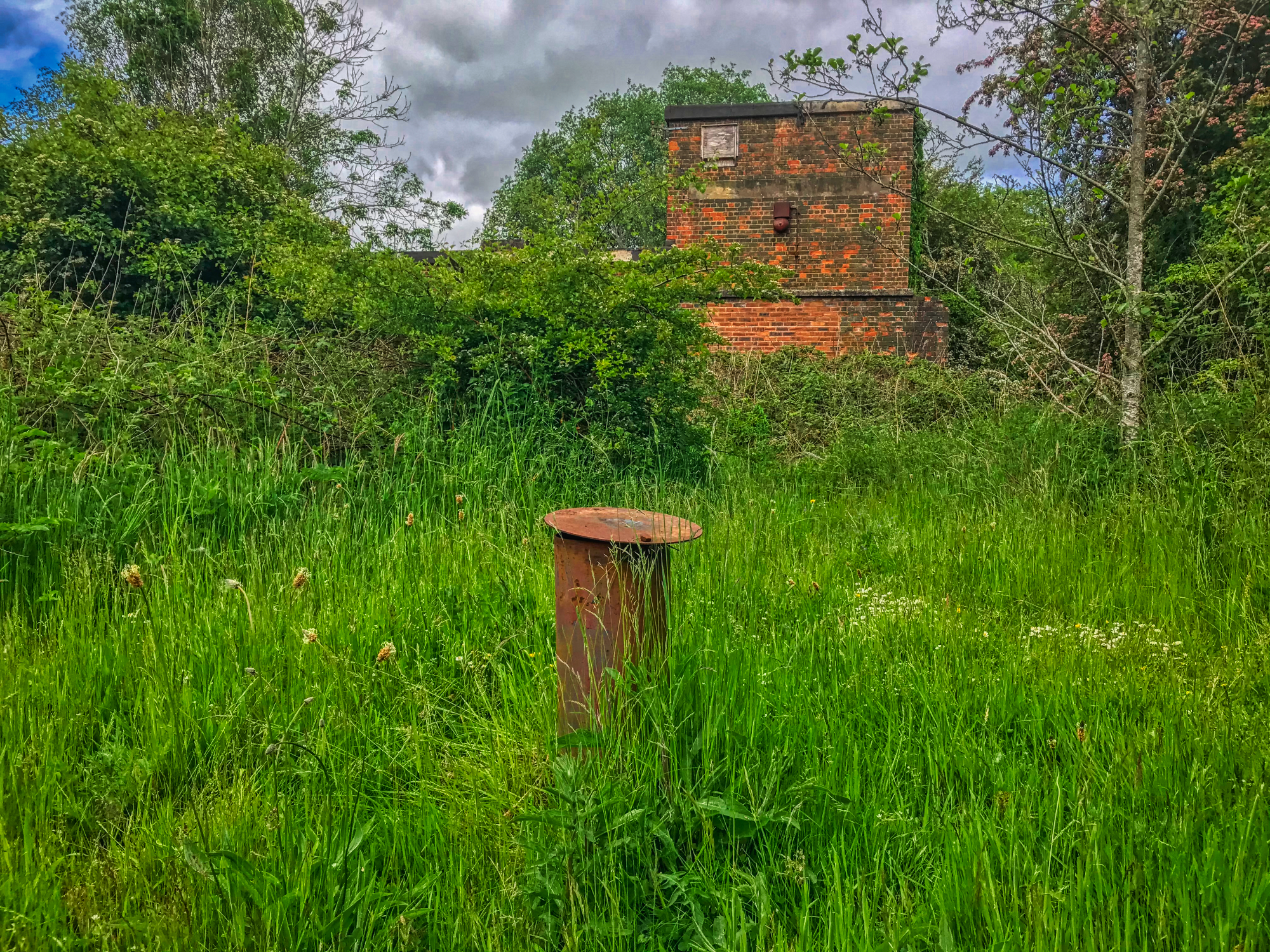 “Here’s a loose one”, yelled @anidiotexplores while scrambling through the small fence gap.

My tingling increased and I felt that familiar sensation of excitement as I squeezed through and found myself on a rabbit path.

Hang on, why is there a rabbit path here? That means it has been set foot on recently. We are looking for mysterious buildings not seen in centuries and there's a fucking worn path?

“So how do we get in”, I said to @anidiotexplores clearly flustered by the lack of ancient Inca temples in my sights.

I gazed over two lots of severe fencing at what looked like a derelict Butlin's Holiday camp..., at the time having no clue what it was.

The M.S. (Ministry of Supply) Factory, Valley was a Second World War site that was used for the storage and production of mustard gas. It was later also used in the development of the UK's atomic bomb project and finally a Cold War storage site.

If I had known at the time I may have perked up to be even half-erect, but was instead hoping the ghost of Billy Butlin might emerge with a tribe of Redcoats as some form of visual compensation. The obtrusive fencing turned out to be a non-entity as we walked to what was the old entrance and found the gates wide open.

Walking through like we owned the place, it was a case of systematically looking for old bombs or at least some evidence mankind had ever stepped foot within. 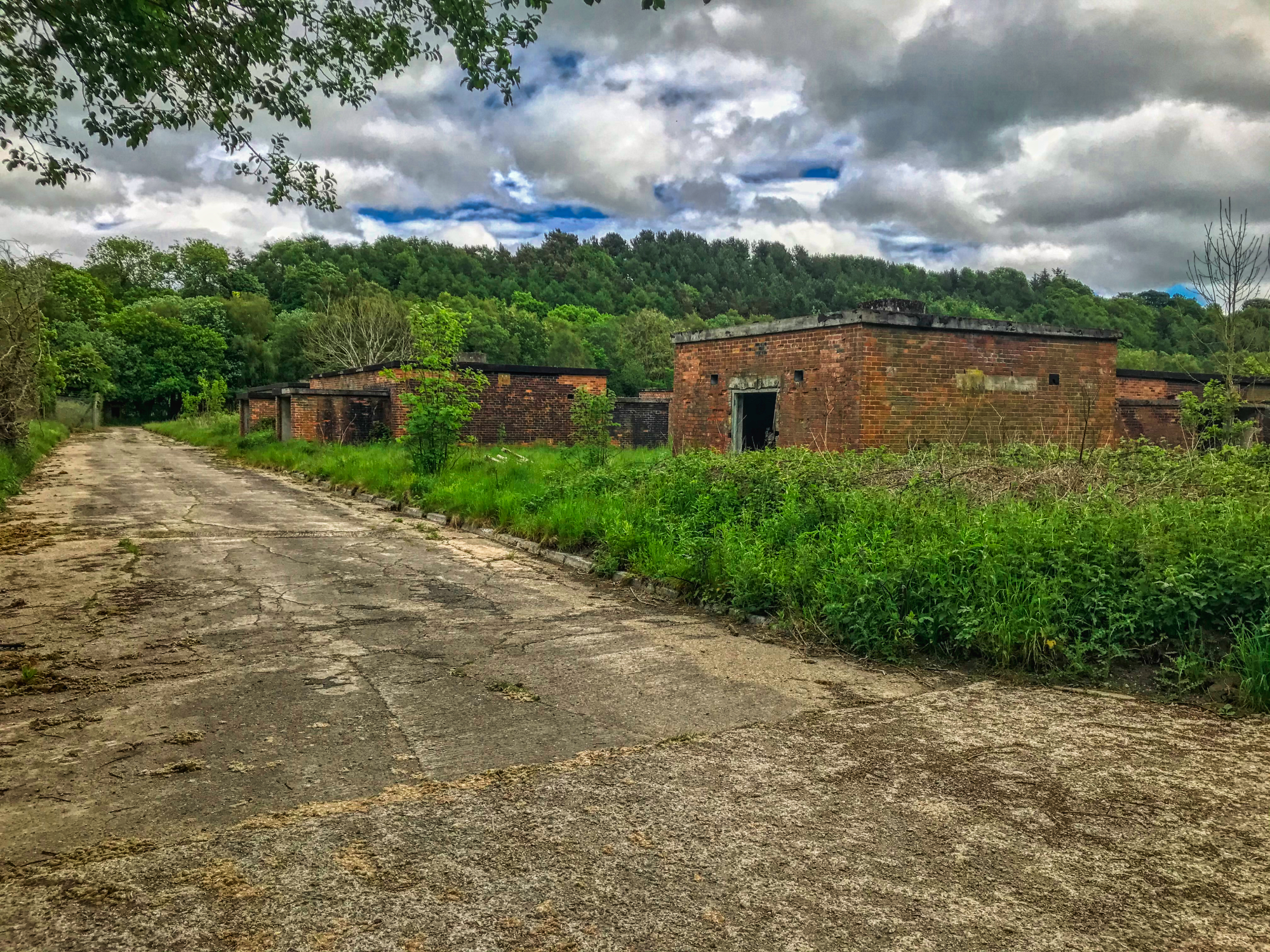 A dog walker emerged on the outside of the fencing but paid no heed to us. We must have taken the extra hard route to get here… again. 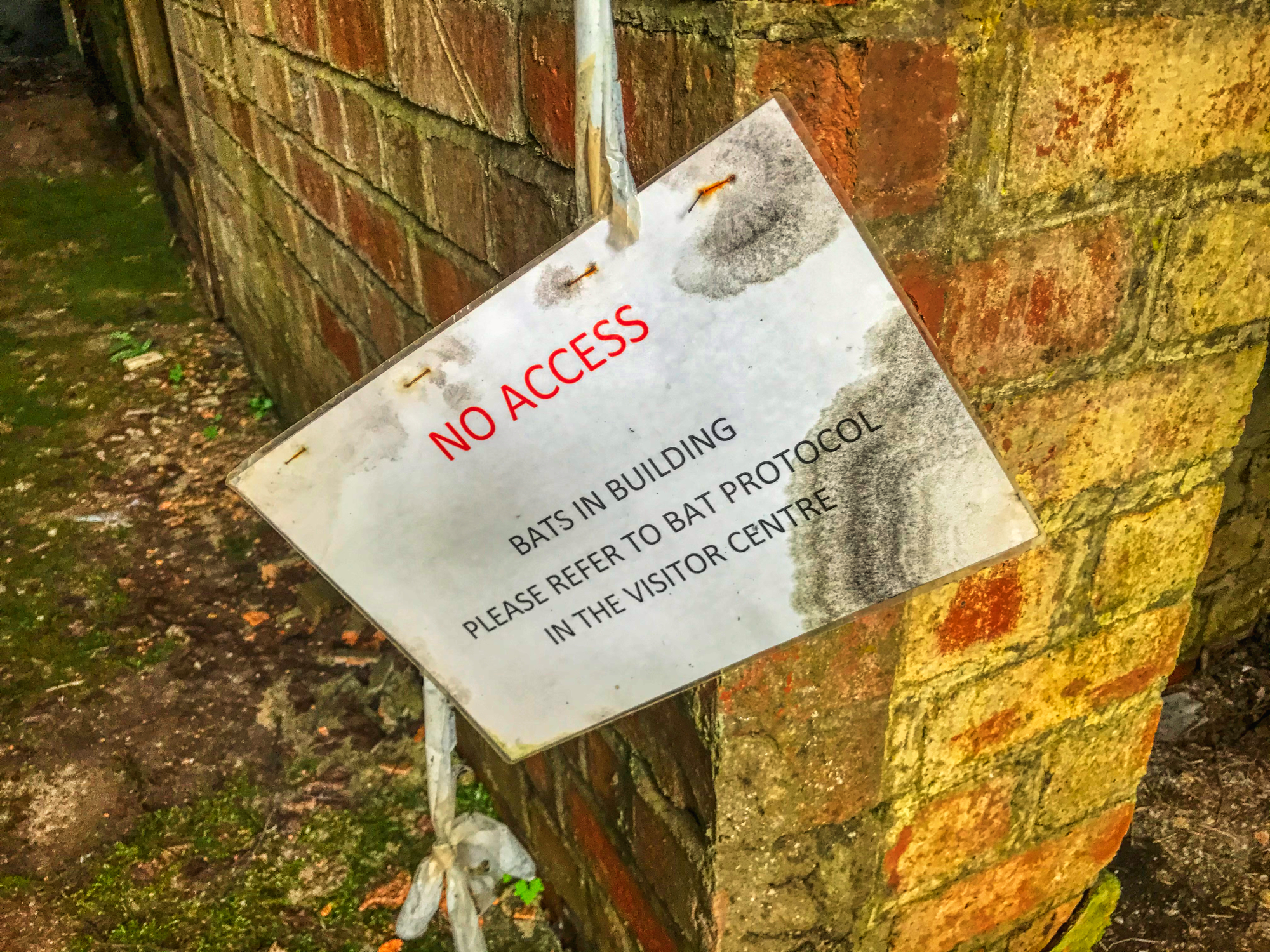 There is mention here that the site was used as a Heritage centre until the 1990s. This evidence shows but at the time the sign freaked me out; Bats?

Some buildings were quite inaccessible due to the massive amounts of foliage growing around their edges. 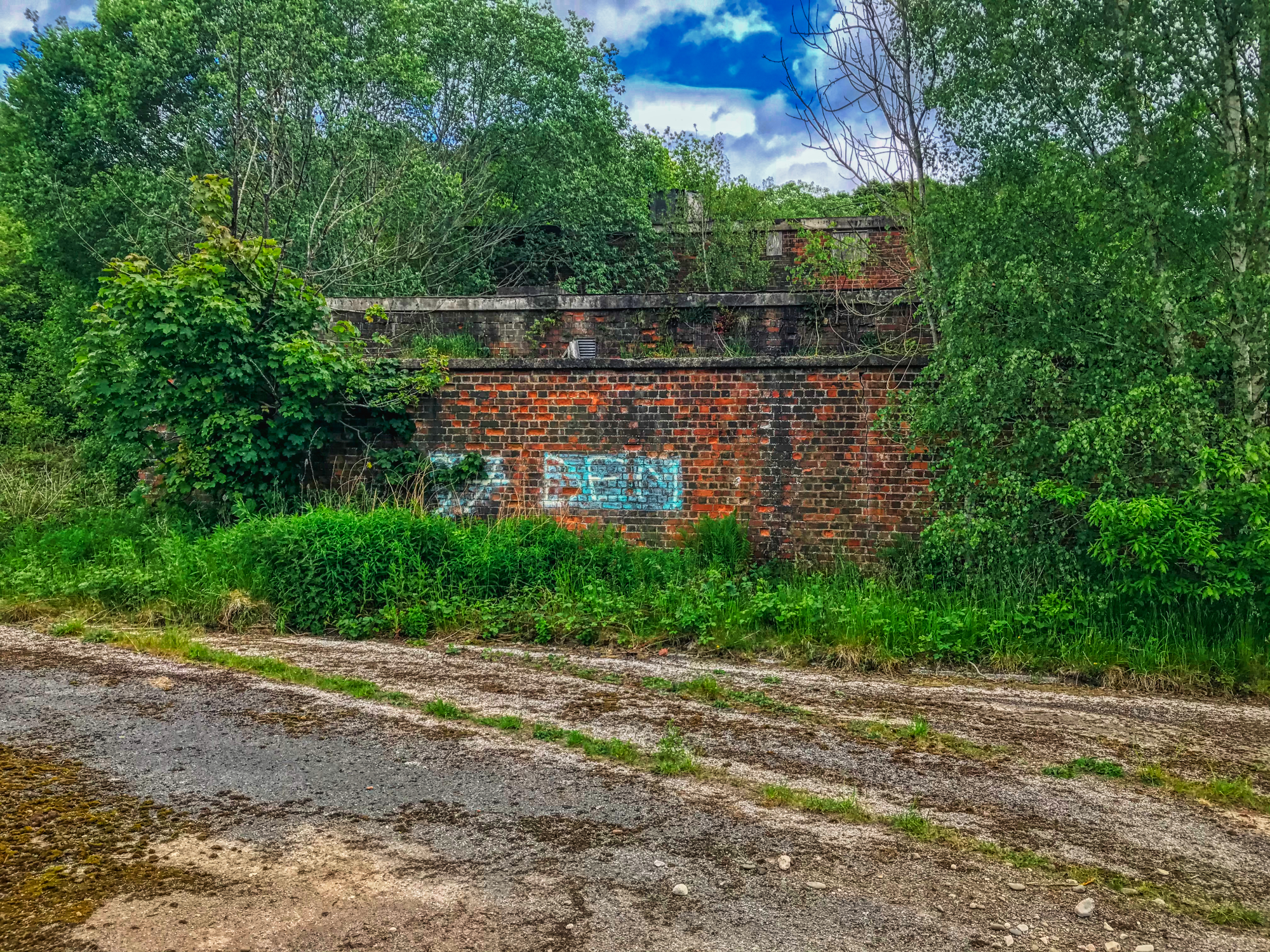 There was a surprising lack of graffiti, though this building was on the outside of the fencing. I wonder how long those front gates have been wide open? 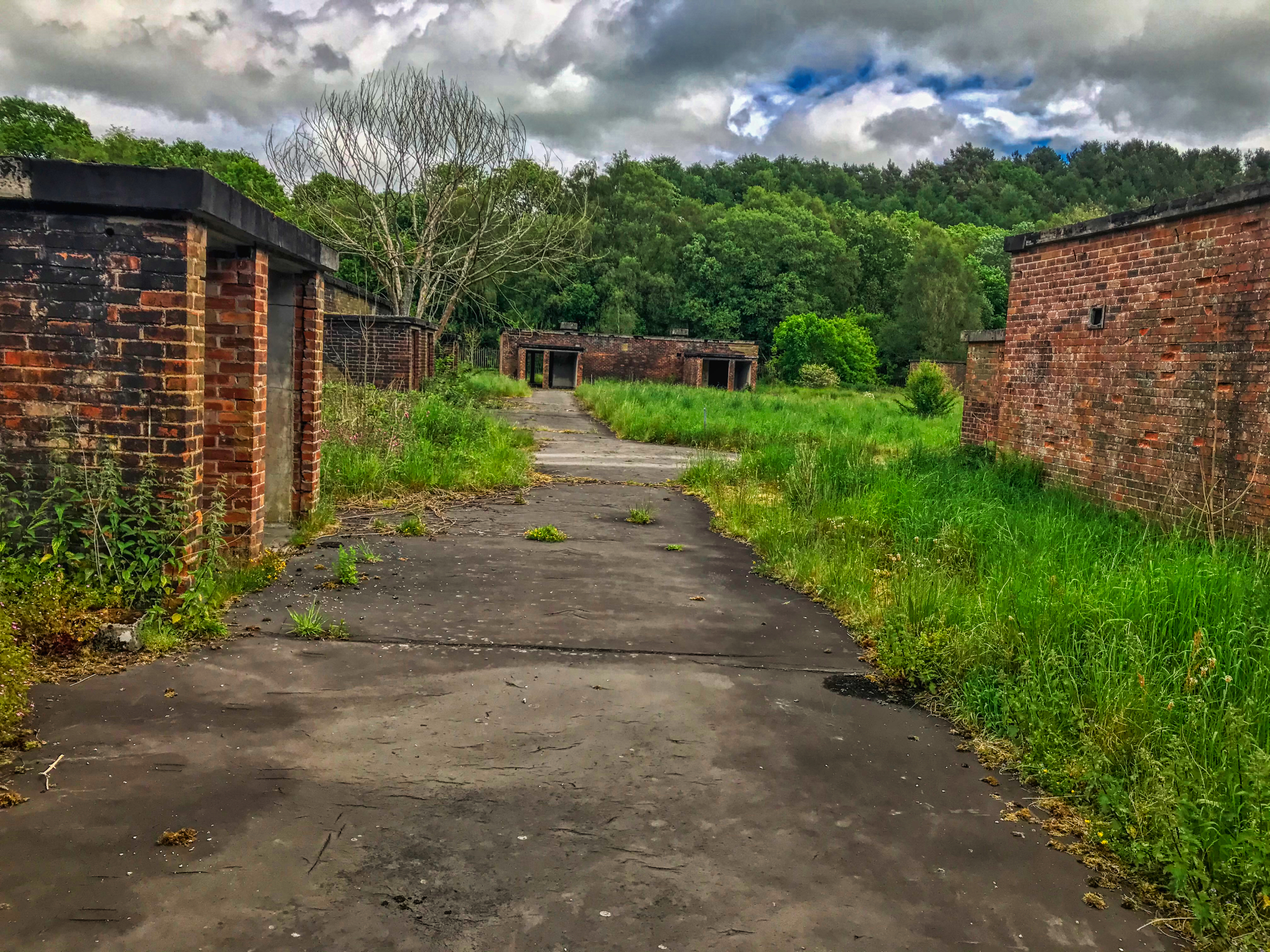 Did heavy tanks once roll down these cracked roads? Perhaps the cracks are a consequence of those monstrous vehicles. (I do hate tilted pictures). 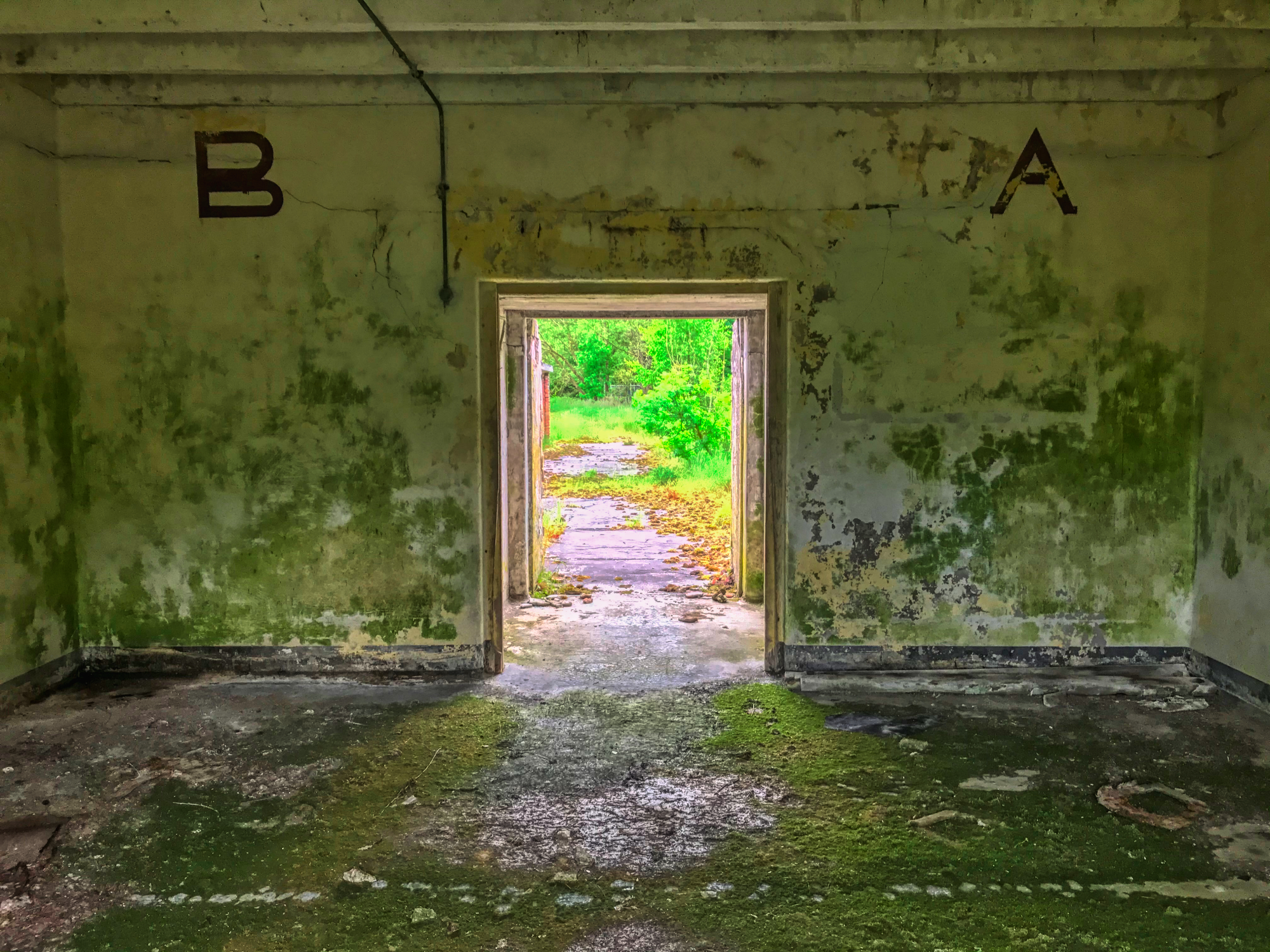 Inside was quite bleak with a few wall markings and lots of green sludge to slide in. 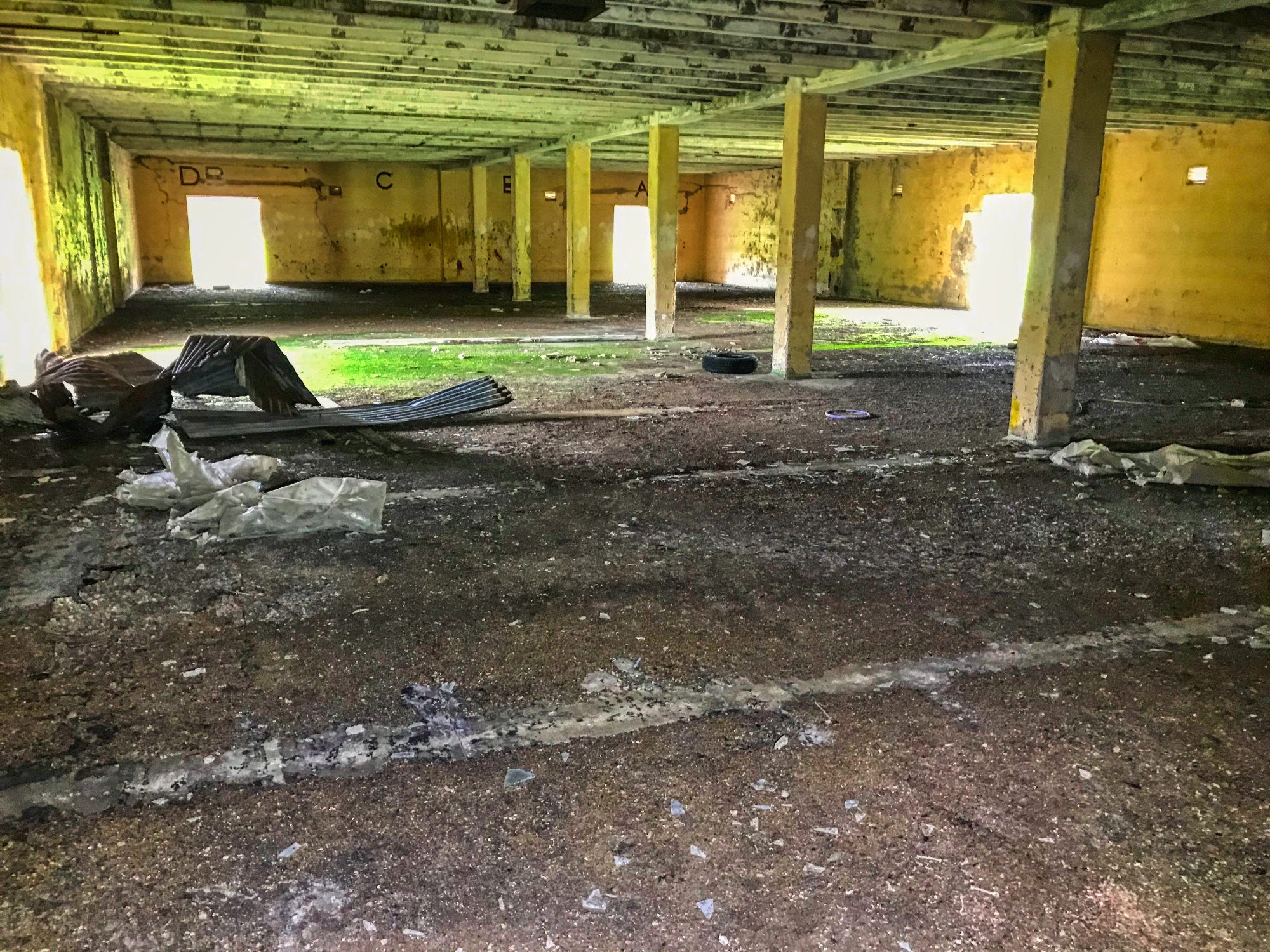 What’s sealed in those bags? It could have been a bomb, but we didn’t care to look. 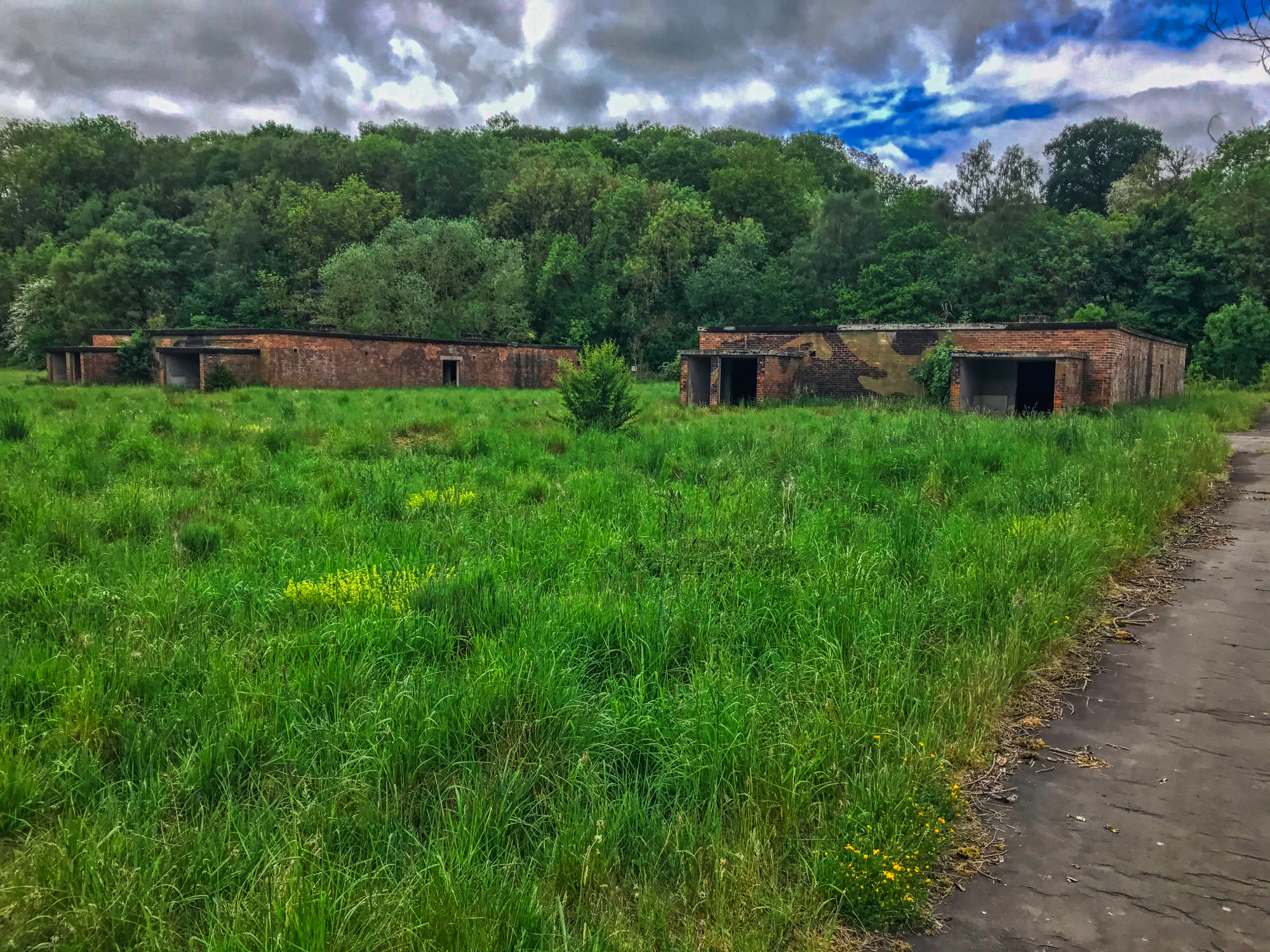 We wandered from building to building in search of something other than fresh air. 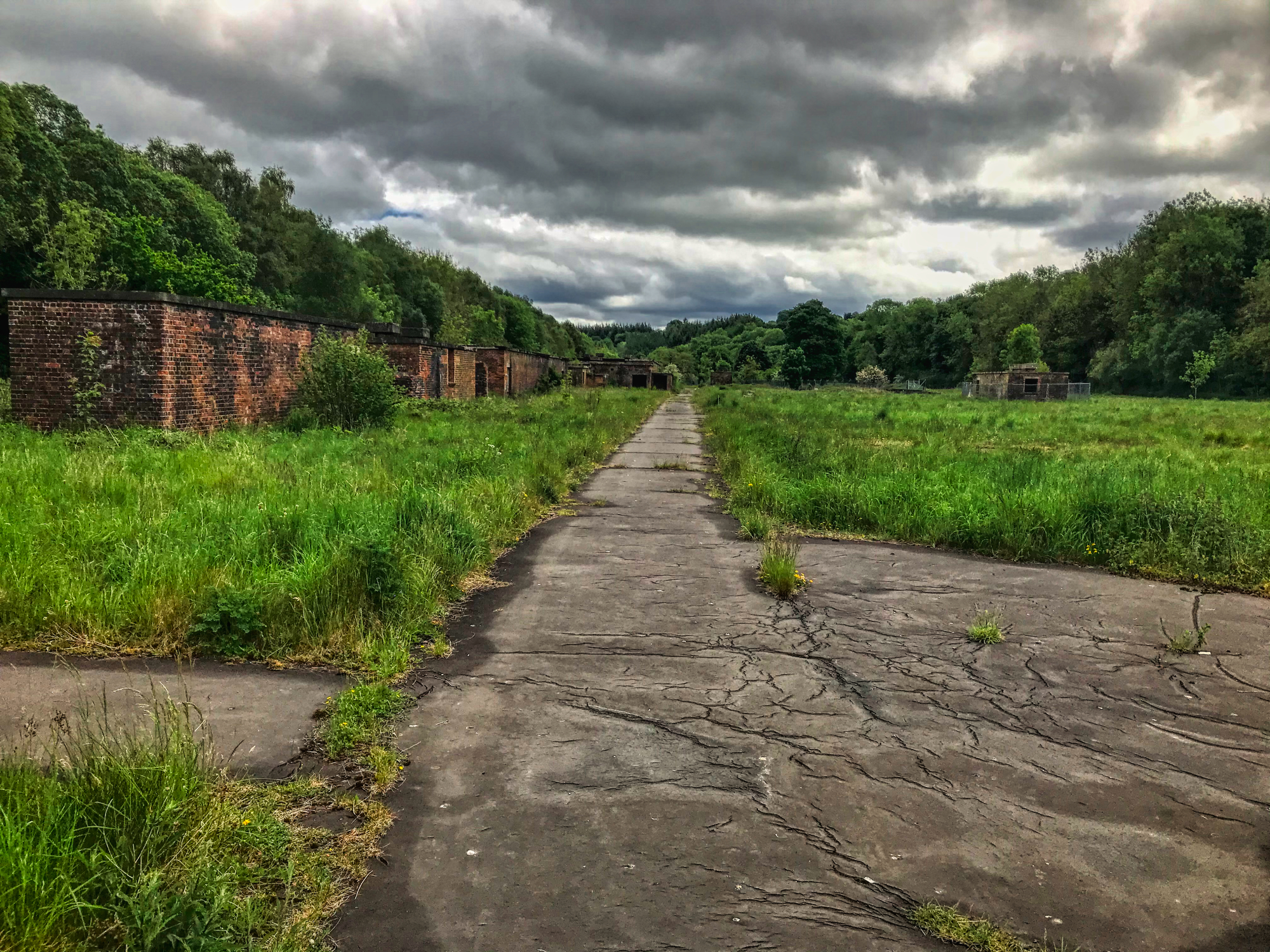 There was little to see but it was a big place and I was wondering if it was worthwhile walking down the endless cracked road. 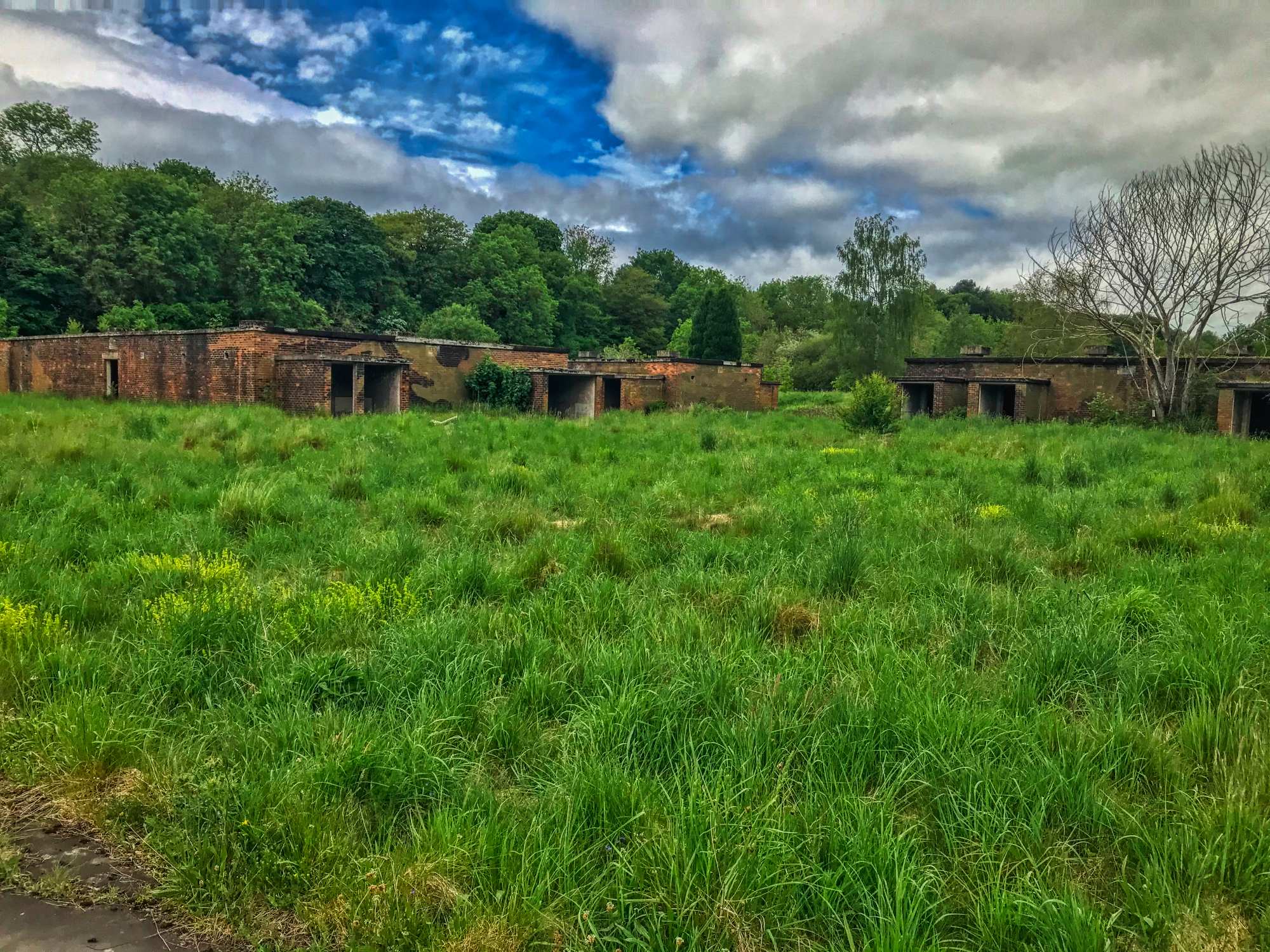 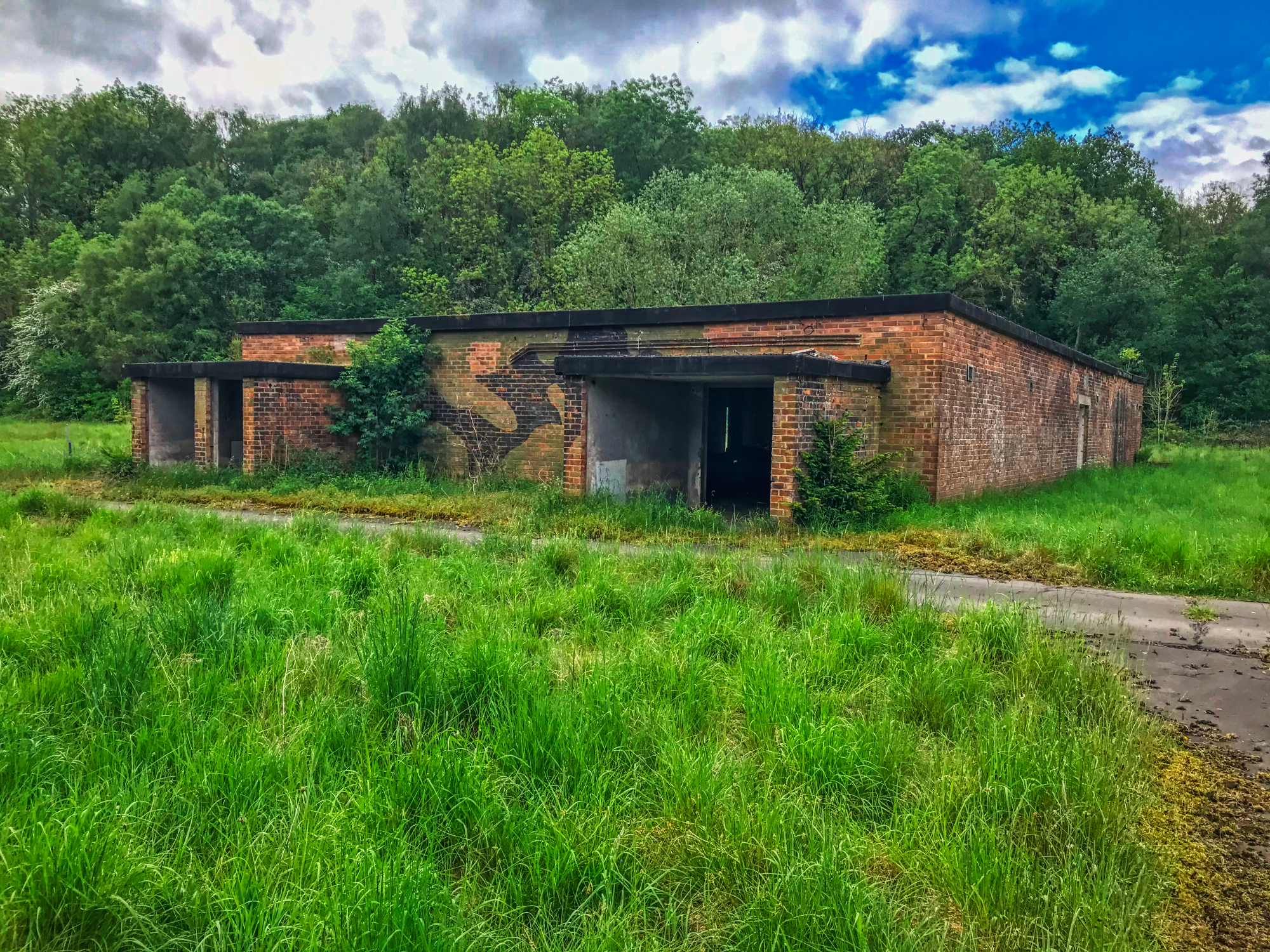 Working here in the war years can't have been fun, it was flat, depressing, and quite lifeless. 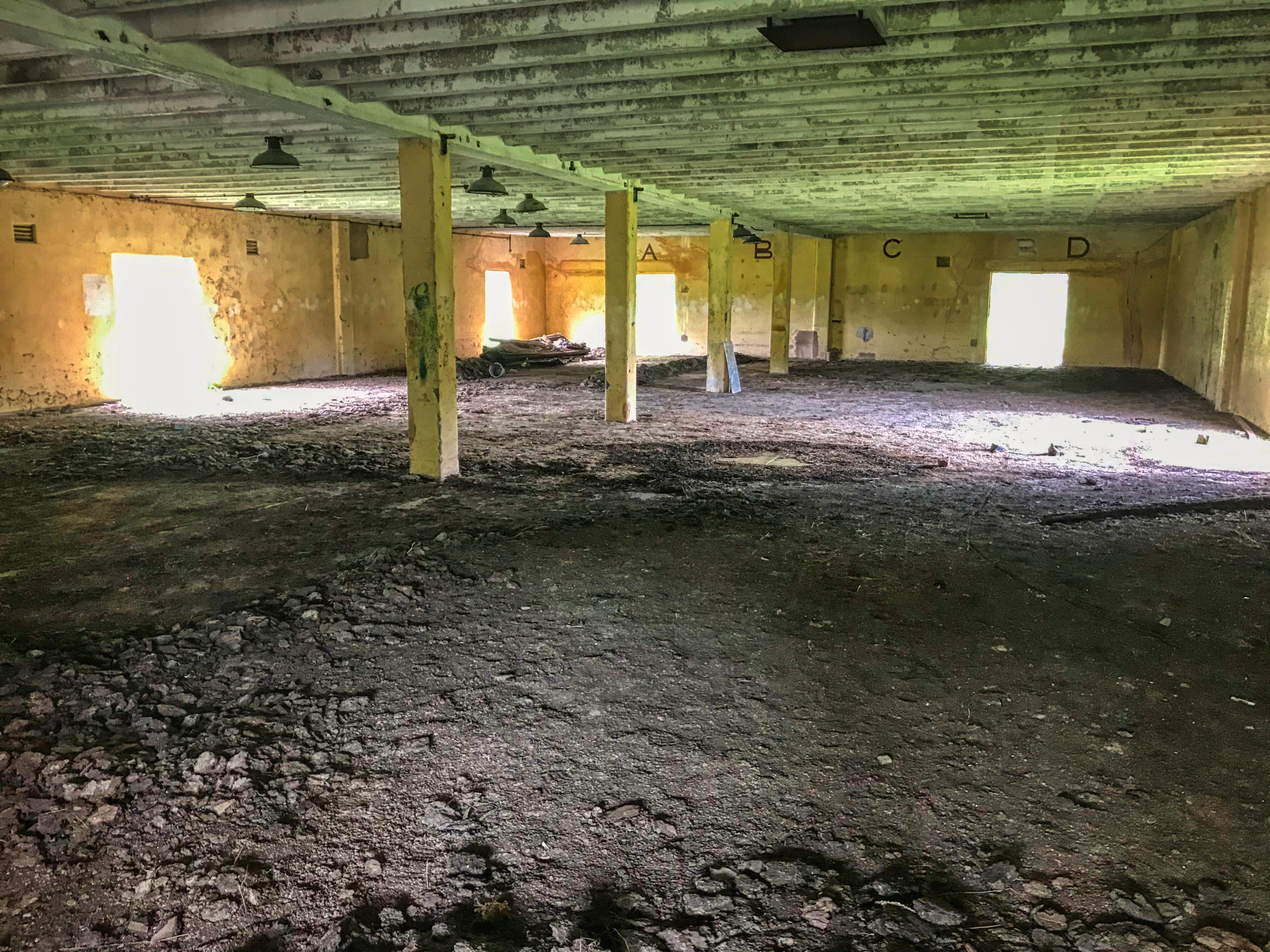 A, B, C, D again at the far end of this one. I wonder what they signify. 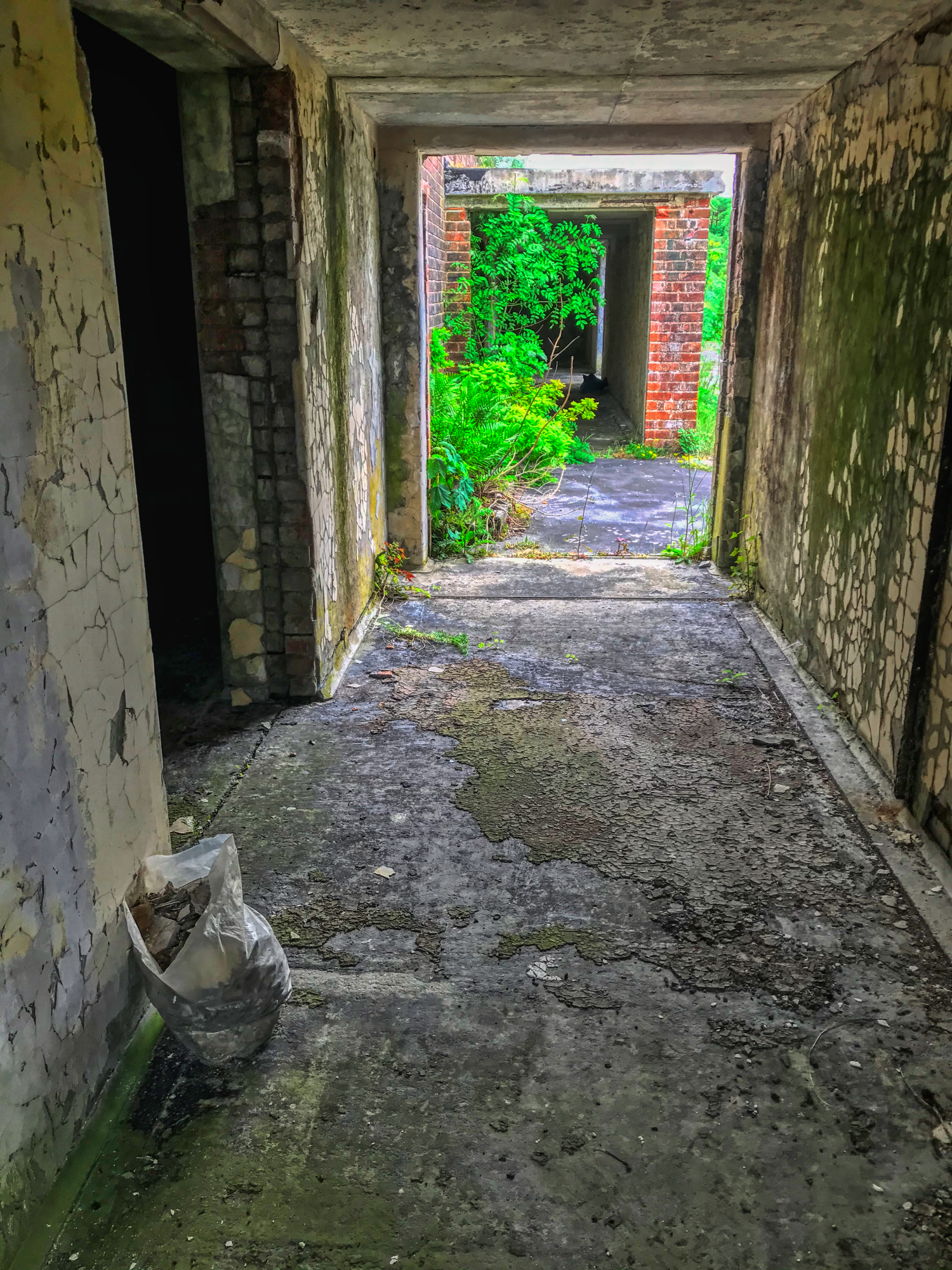 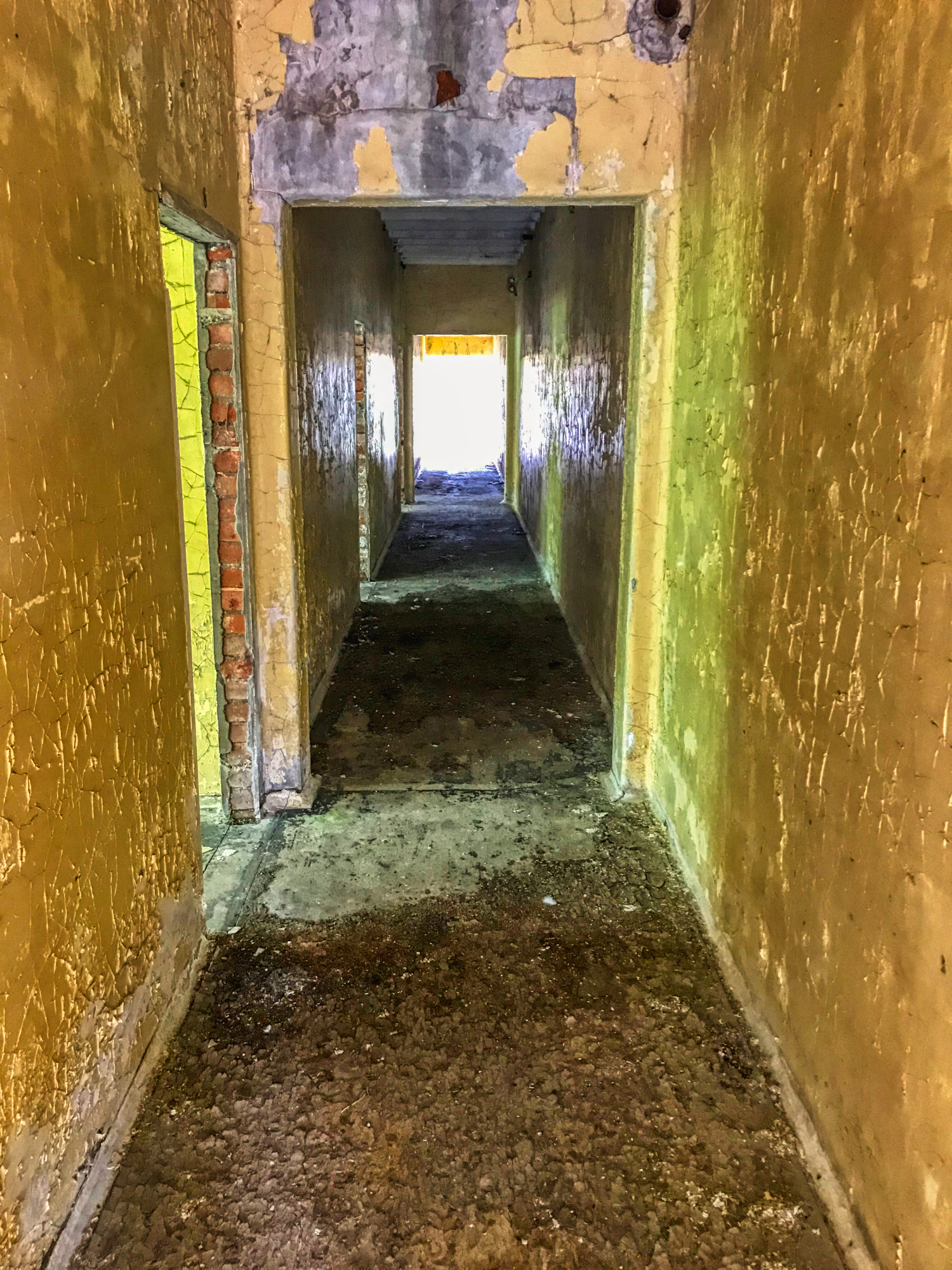 Not as creepy as an abandoned hospital by far but similar in some respects. 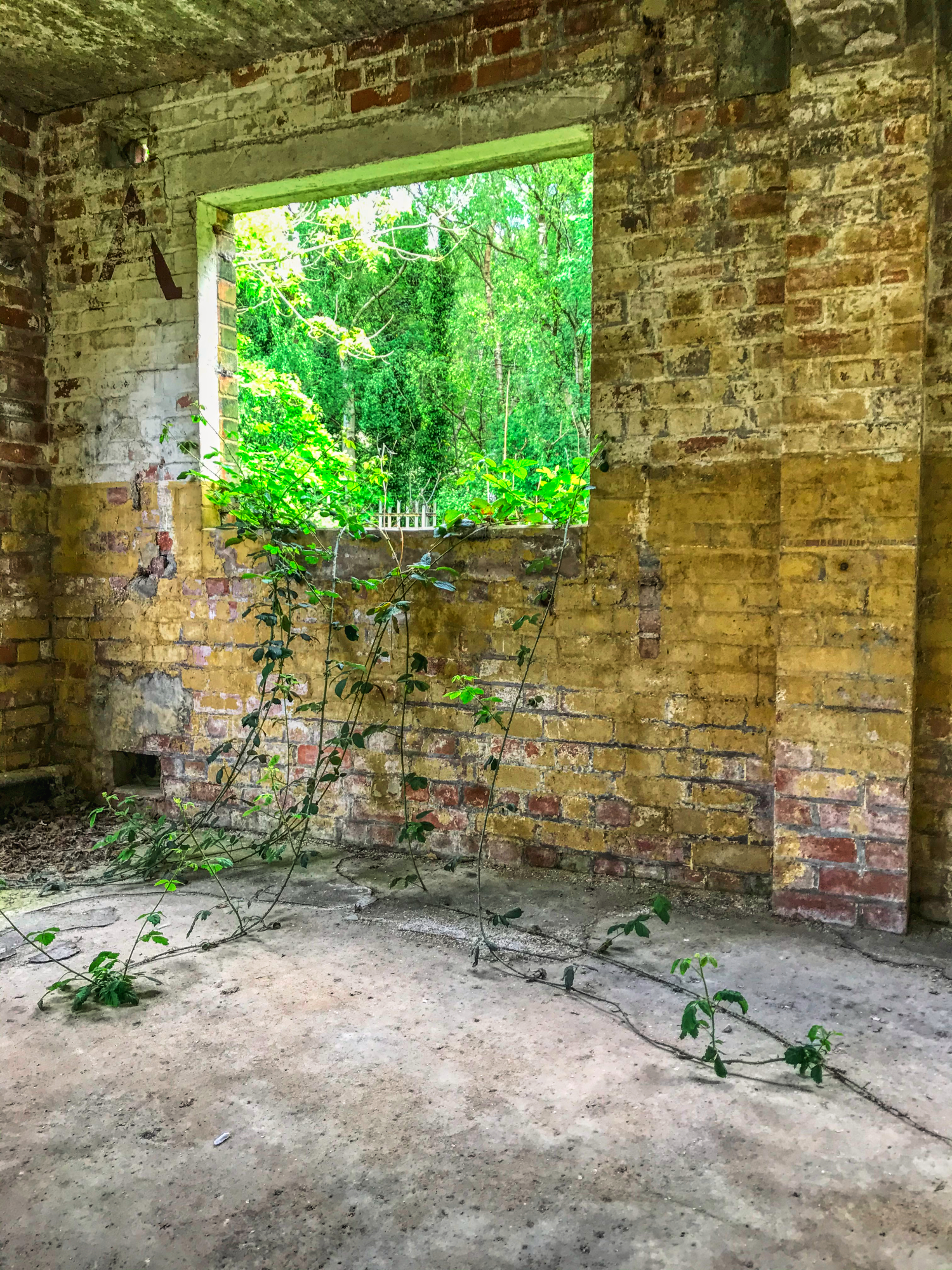 I do love creepers crawling through old window shots. 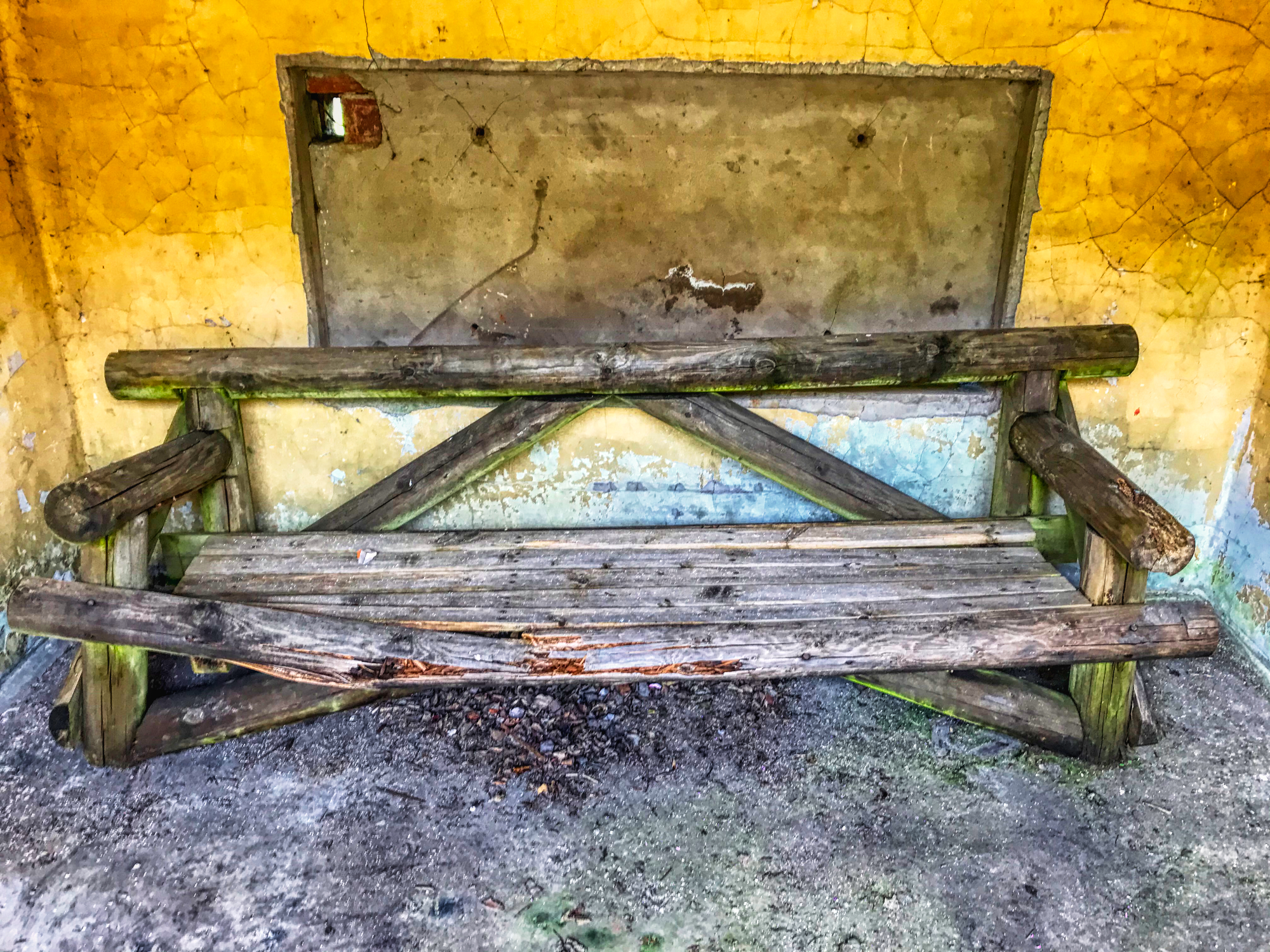 A not so comfortable looking chair, I dared not have a breather in case it collapsed under my arse. I would bet many a soldier has sat here. We gave up after a while looking in the endless buildings that were the same as the last one. 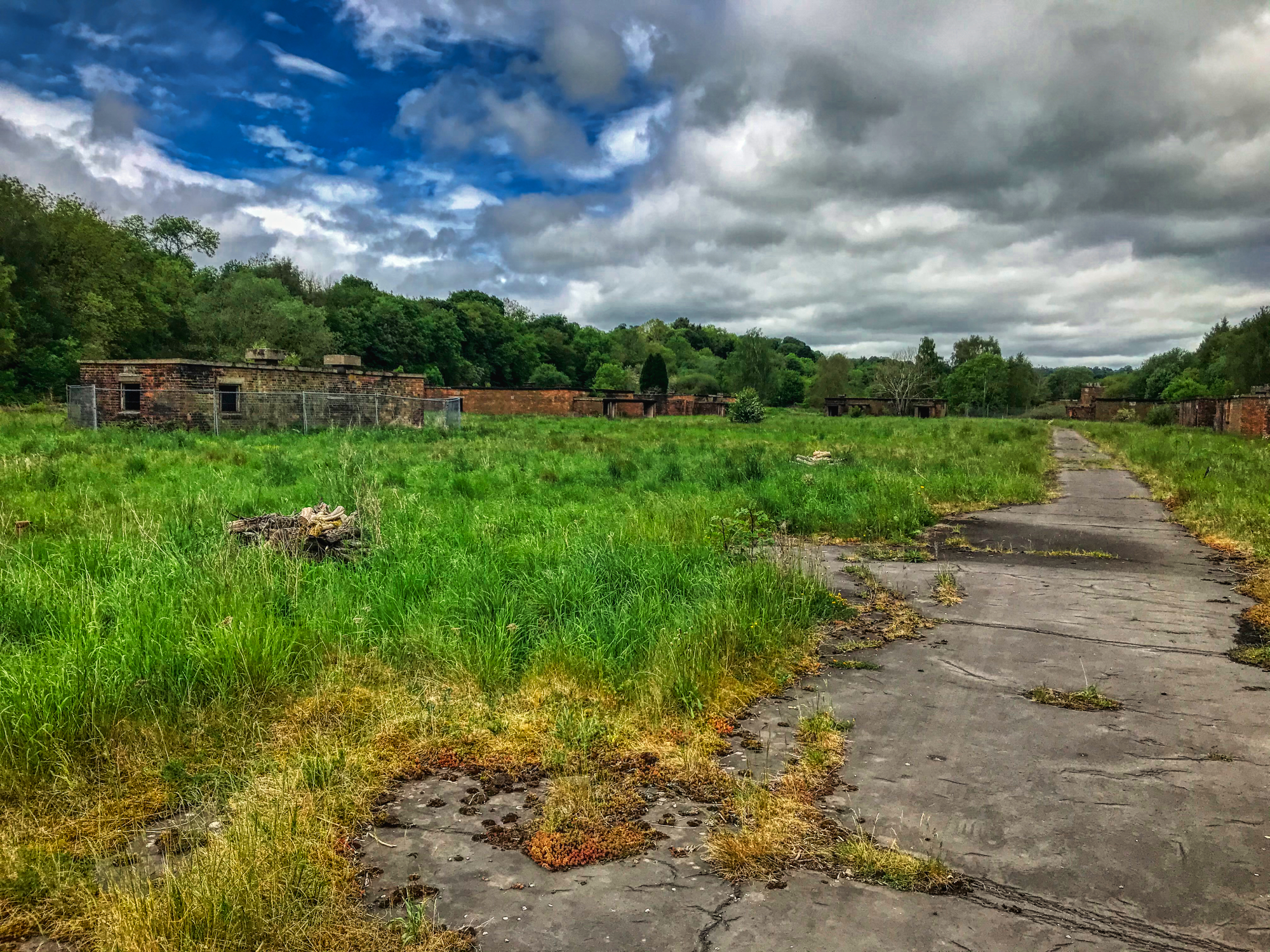 Retreating back to the entrance I noticed the building on the left contained some herras fencing around it. Surely there was a discarded Atom bomb inside? 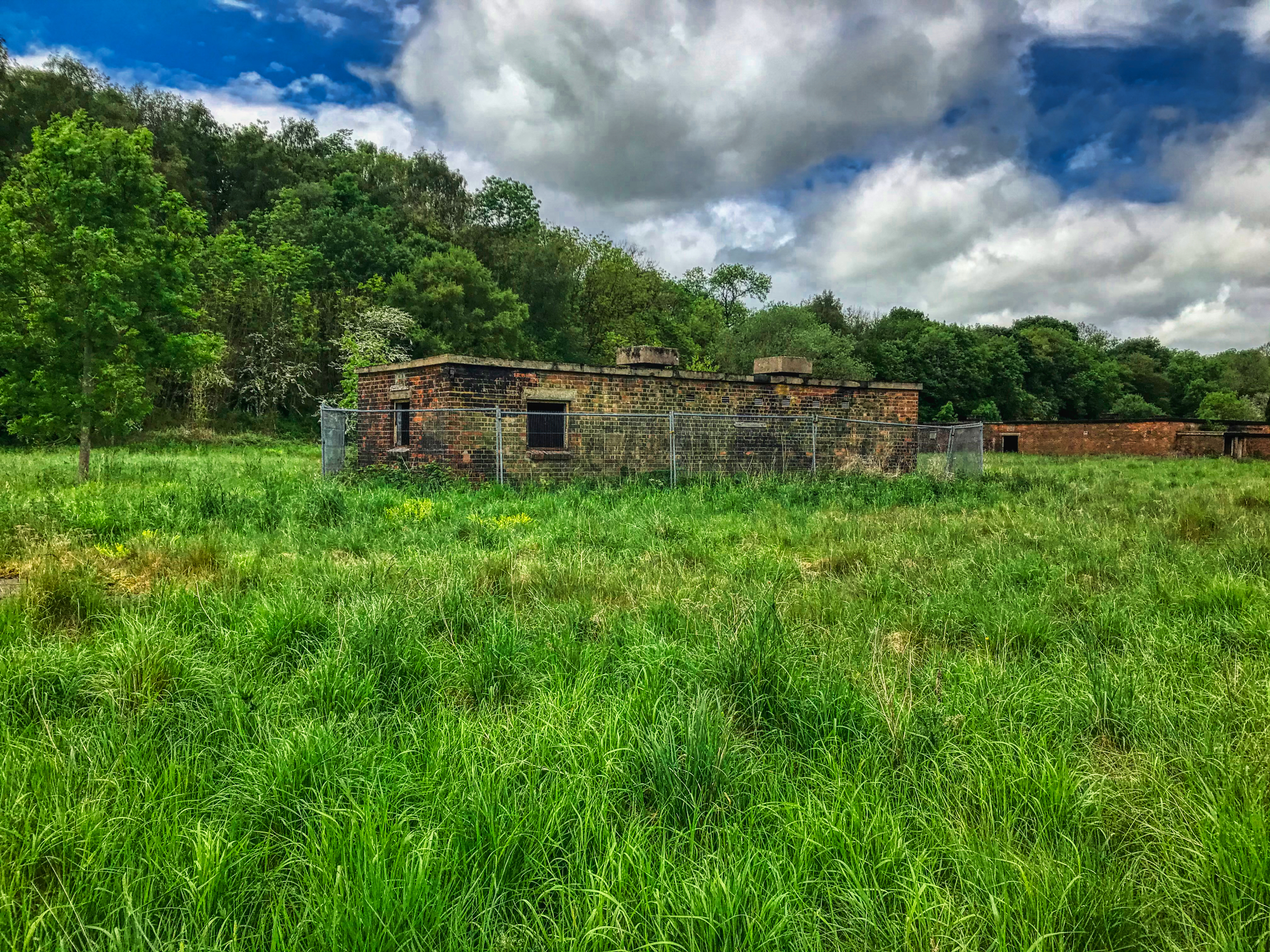 As we closed in the tension heightened... 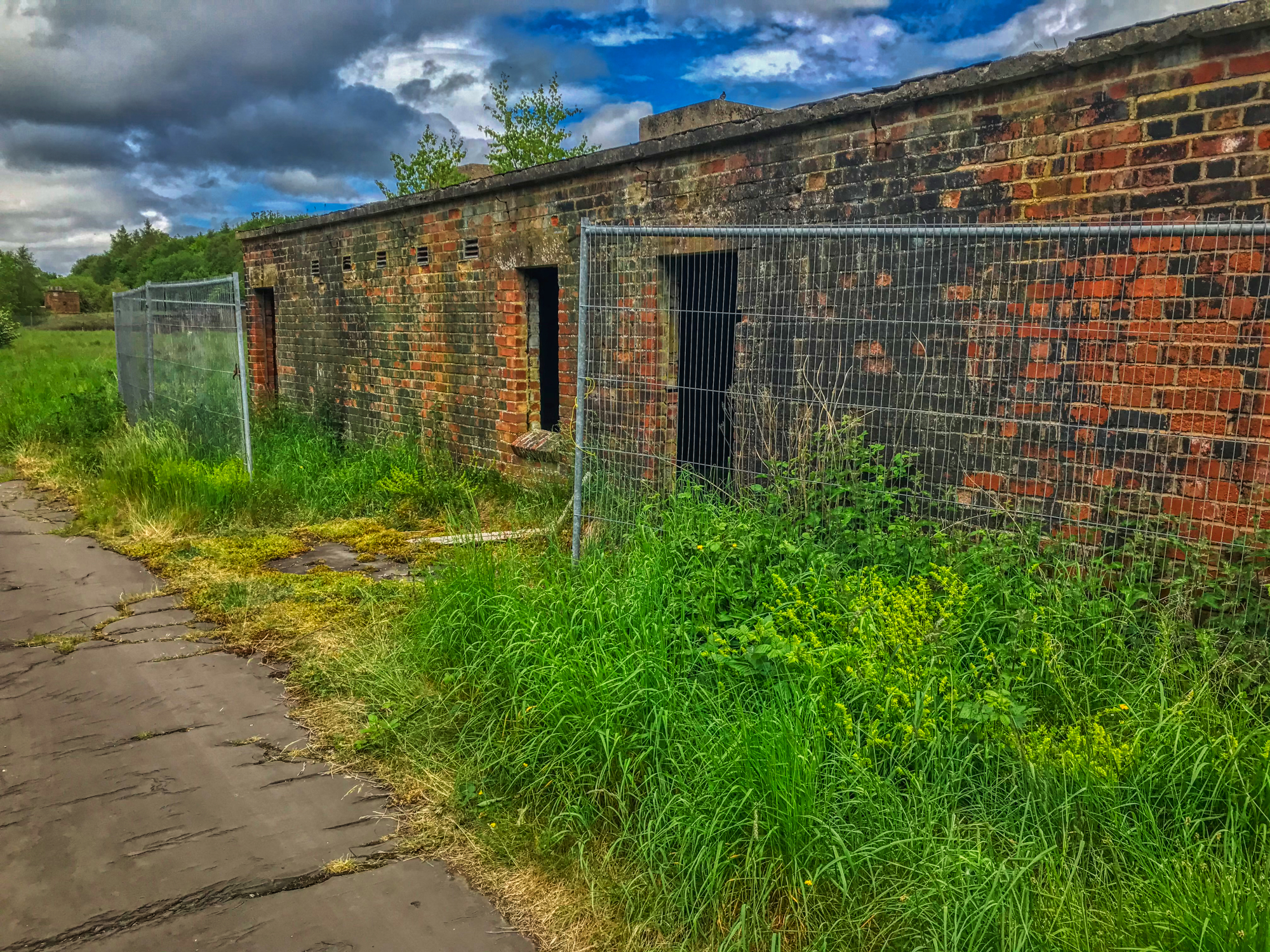 The fencing was not as intact as we thought on closer inspection, a severe blow to expectations. 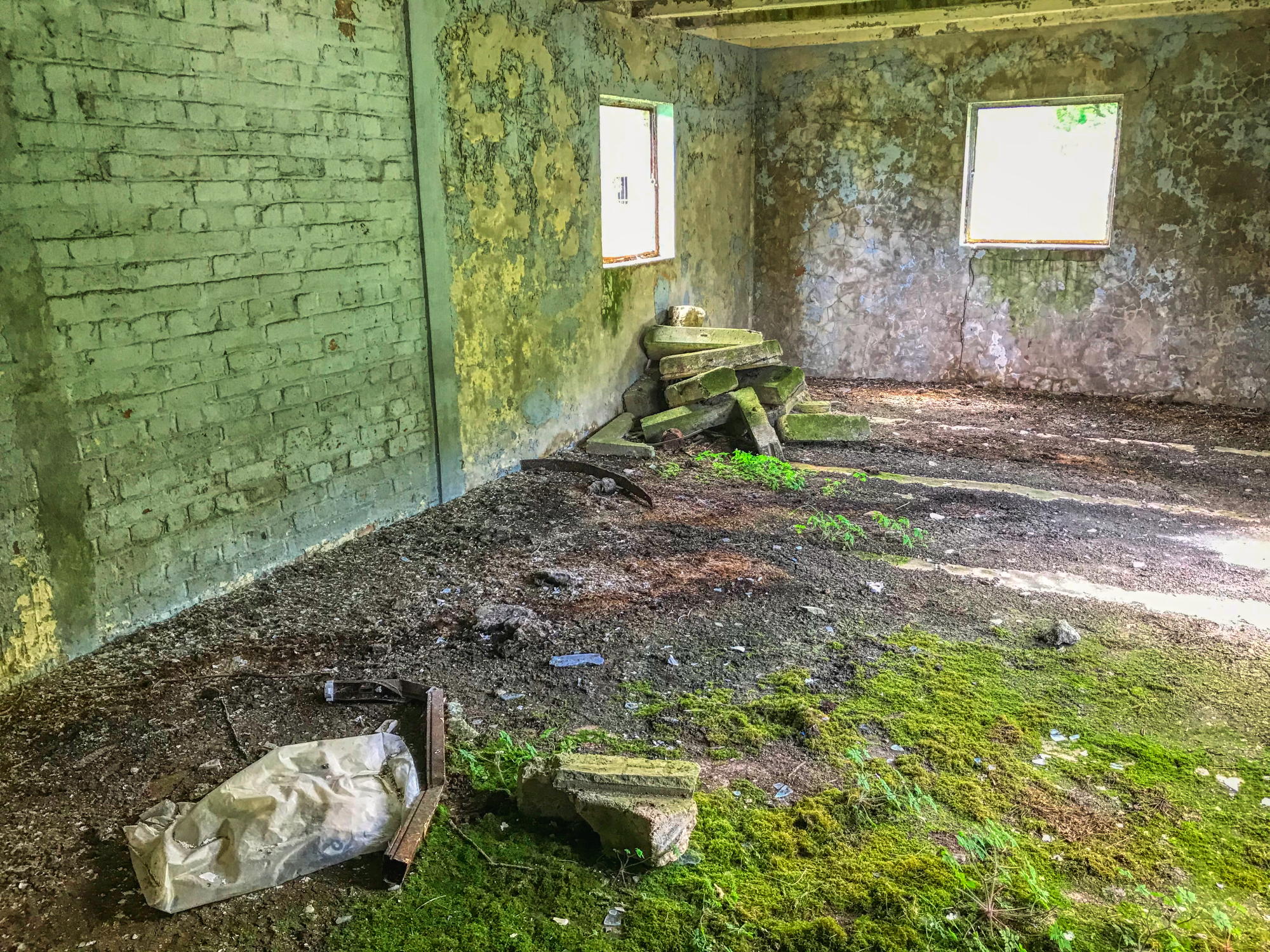 If the bomb was in the bag, then it was a missed opportunity.

This one had great history but was ultimately quite dull as explores go. We left via the same route and hoped 'Grandad's House' was going to be more exciting.

This does look like it was a cool place even though there wasn't a ton to see. I could see it being a good location to shoot a movie or something like that. Lot's of open space and natural light you know.

It was never going to be an 'A' list explore. The building I spotted on maps where not actually this but next to it. A random find that somehow I didn't see on the birds-eye view. Love the history associated with it.

Looks like a fun place to have a run, ABCD.... Hmm wonder if its anything to do with the old Abbreviations...
Able Seaman Clearance Diver, Advanced Base Construction Depot, Absolutely shit canned Admiral.

Wish I knew what they were, it was the same in many of these buildings. We didn't get around all of them... got bored in the end!

I know the feeling, the number of times I've abandoned the mooch halfway through is uncountable. Somehow boring is as bad as it gets.

The reason I avoid abandoned blocks of flats. They are massive and all the same. I can't say it happens often, I prefer smaller places.

Interesting are not only the buildings, but also the solitary places that play a very striking role because it makes the whole even more disturbing.
The beauty of such structures are the unframed walls showing the orange bricks that contrast with the greenness of the landscape.
By @rodyservi :)

Its a shame it ended up so samey!

most delicious vagina - you're getting worse :OD

most delicious vagina - you're getting worse :OD

You are a bad influence on me, bad bad bad!

When an explore is historic but lacking certain visuals, then one must create your own!

wow, you weren't afraid when you entered there, I mean the possibility of encountering an antipersonnel mine or something unforeseen?

No, we don't have such things lying around in the UK.

Even though it wasn't as exciting as you had hoped, it still holds cool points just for what it was used for. The UK traced 3354 workers, about 95% were traced for mortality until the end of 1984 and there were direct links to cancer. That might have been one of the reasons those places were stripped clean, with no traces left.

It was still interesting to see the place and you can imagine how depressing it would be to work in a flat, lifeless building. Again, the numbers and letters were for easy identification as to the location. That would be my guess.

With it not having Constantine wire or some other form of keeping you hoodlums out, I would have to say that the place is scrubbed. They cannot possibly take a chance on any traces of it being there.

Bats? Heck no! I'm allergic to them!

Not much left at all in this one. It was hardly a planned explore so I can't complain. Plenty of history though!

A large section of dense trees with a couple of buildings on Google Maps looked quite suspect and so I noted it down for a visit.

This sentence had me hooked. I'm not as confident that any adventure to a suspect place will not end in a reenactment of every scary movie I've ever seen and this place looked ripe for such a scenario. So I am glad to be able to live vicariously through your adventures.

wow this is impressive......i love adventure too, looks like it could be a good location for a great movie....and thanks am a newbee and your video on hive was really helpful....mind giving me some upvote?...on my post!!!...i did appreciate....am following you right away

Hey mate, sorry to jump in off-topic.
Do you mind reviewing and supporting the Hive Authentication Services proposal? That would be much appreciated.
Your feedback about the project is welcome too.
Thank you.

Yes mate, it's done. If someone could do a 'Login with Facebook' then we could really get rolling.

That's the goal. Thank you for your unfailing support, really appreciate it! 👍

Well I think I know what they did with the leftover mustard gas- painted walls mustard yellow which is actually baby poo brown...and I always wonder why people love wearing clothing that colour...what is going through their heads...