Moving on from Storthes Wood Lodge I knew of another quite bad condition derp nearby I visited last year named The Graffiti House with @dizzydiscovery.

As @anidiotexplores had not visited this one and as I had failed to get into the other house behind it tentatively named ‘Creepier House’ I figured it would benefit us both. On arriving I could see little had changed in 'The Graffiti House', and before I knew it my comrade had disappeared into its depths and I supposed was snapping away.

On following, I couldn't find him and my yells were yielding no response.

Where the fuck had he gone now?

Ah.. but things had changed, and at once I could see The Graffiti House was now simply a conduit for what lay beyond. 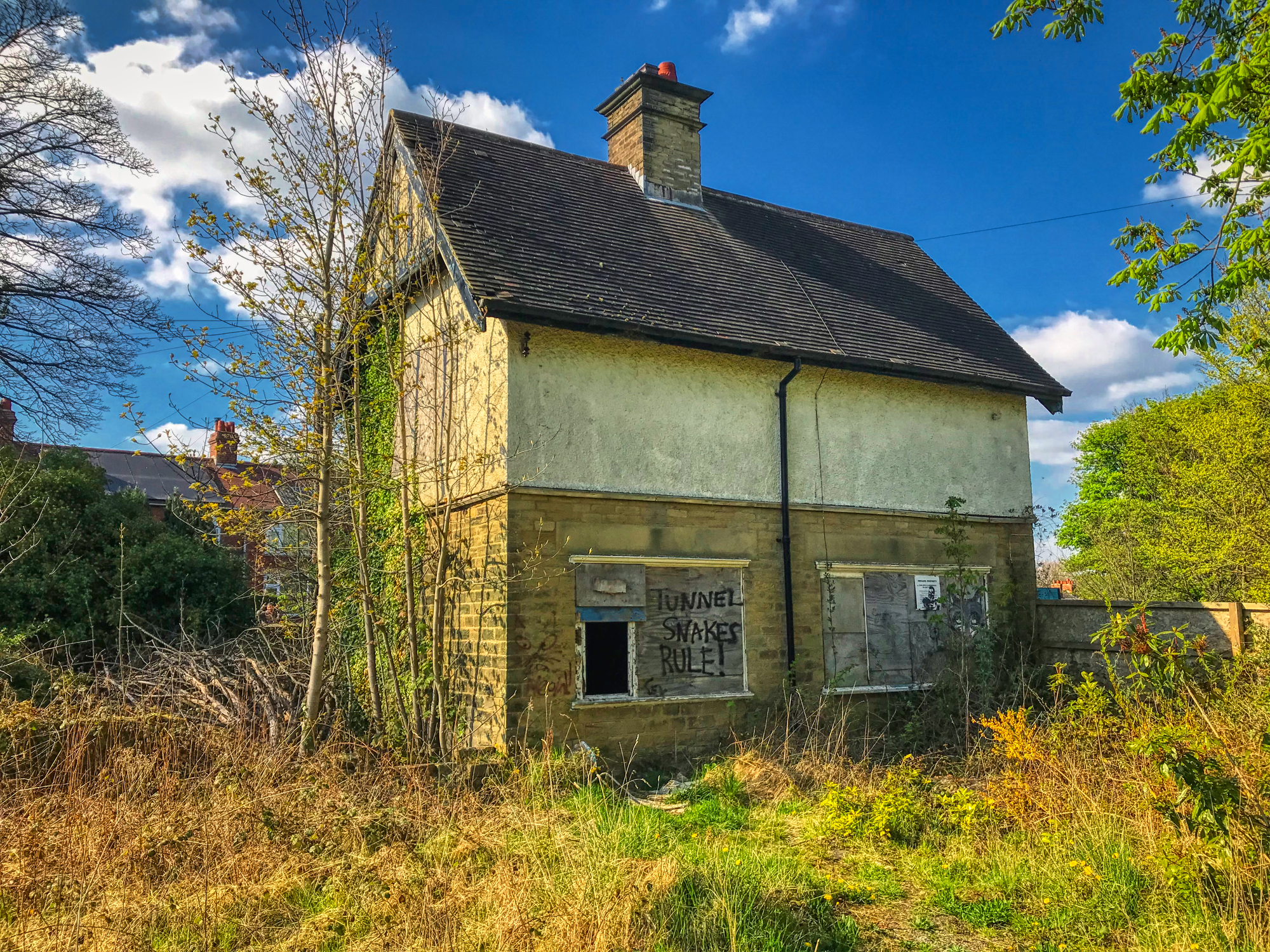 Jumping through the window with the agility of a pregnant sloth I made my way down to another house that looked remarkably similar.

It was there I caught up with @anidiotexplores who was attempting to get close enough to what looked like a window mostly devoid of glass. It doesn’t look quite so creepy anymore, I was thinking. That’s what bright sunlight does.

I do know of another explorer, in fact, a Goontuber who ran in terror from 'Creepier House' not so long ago. What was so dreadful inside that could instill fear in a veteran solo explorer? 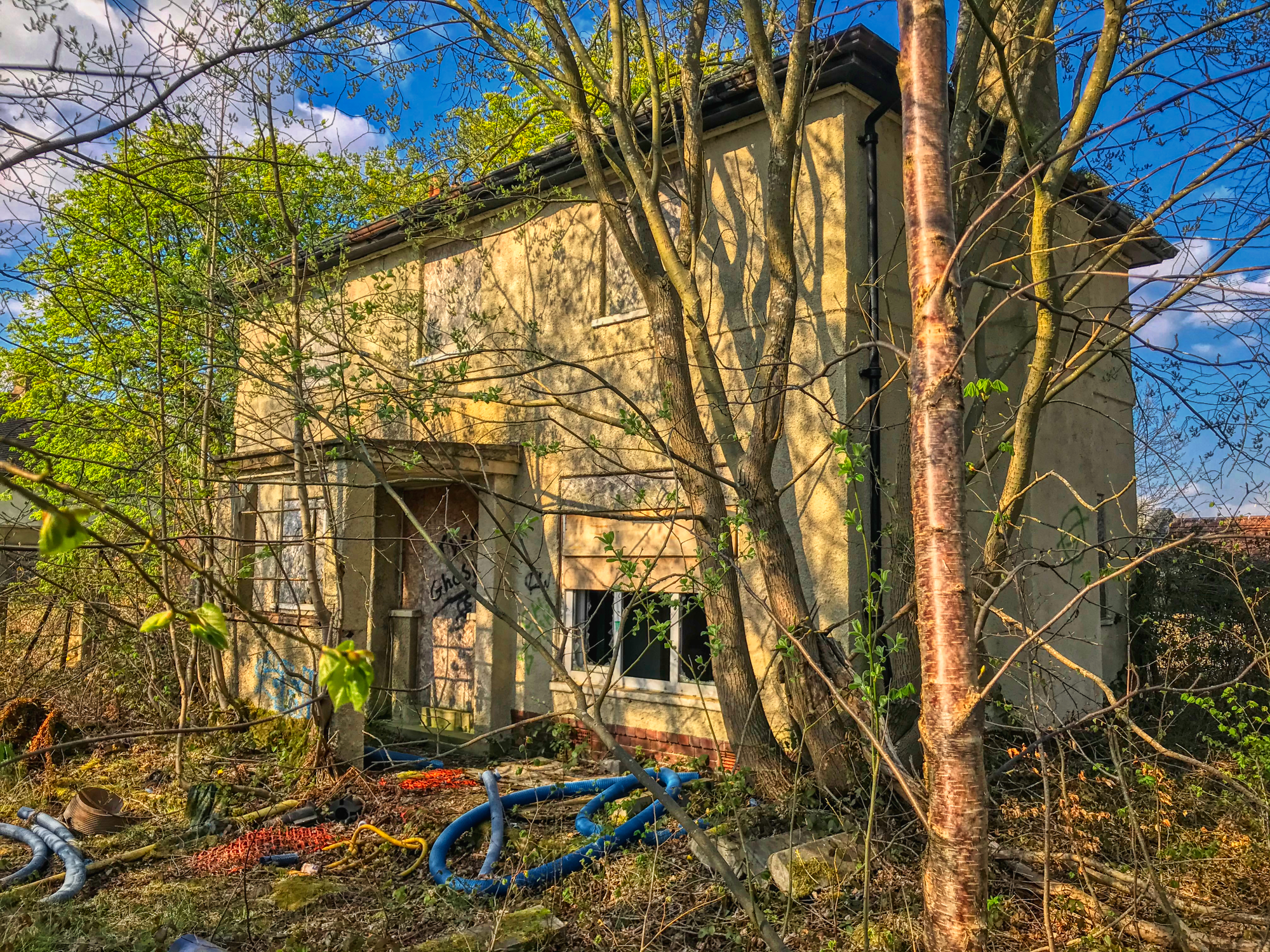 Once again brambles and overgrown nettles were the major obstacles to getting close. If portable machetes were not illegal here I would carry one for this task.

After straddling through the empty window I found myself in yet another graffiti-filled old house.

At least this one was not falling apart so badly as the others. 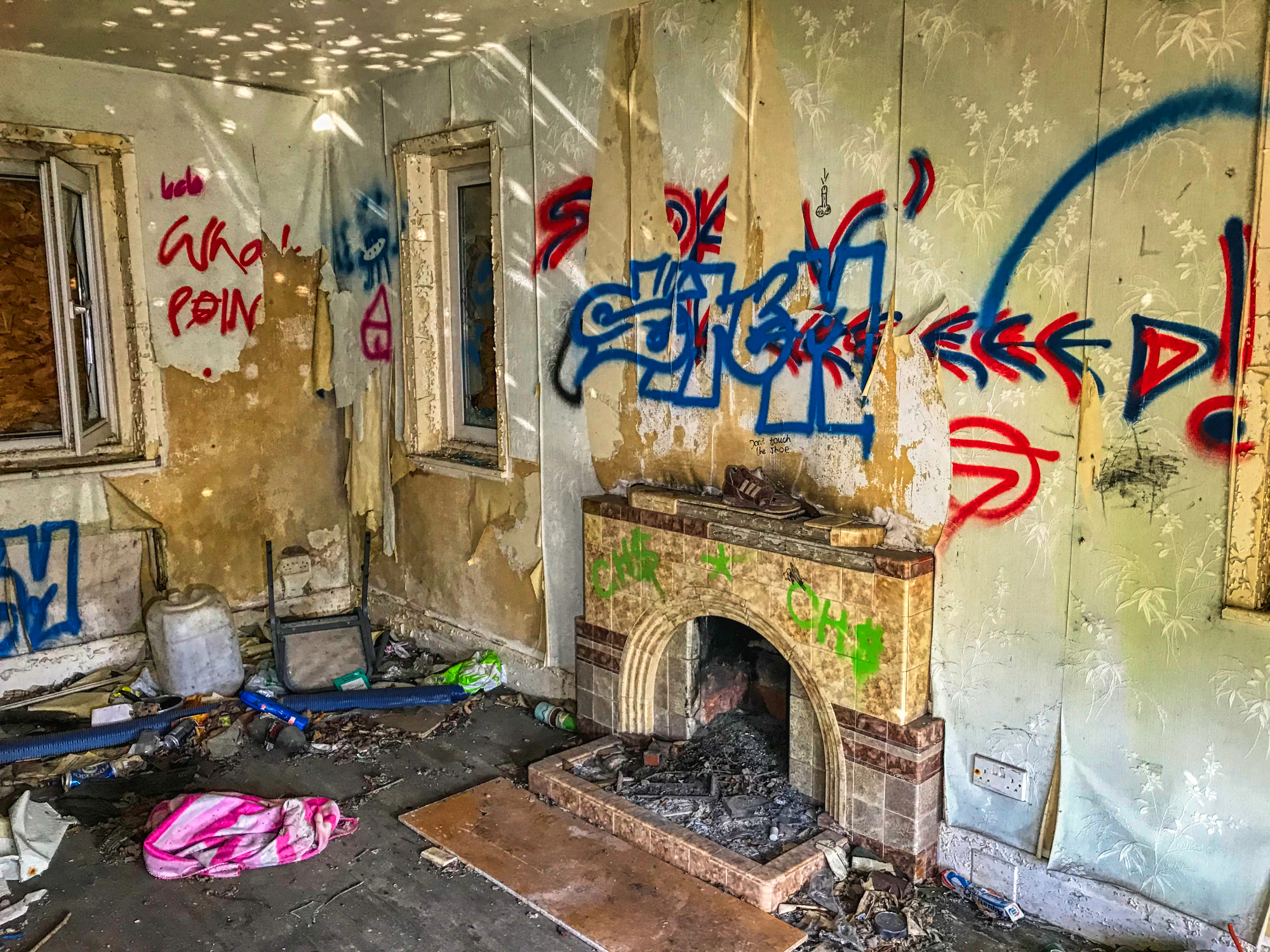 My eyes immediately went to the mantlepiece above the old fireplace. What was that?

I gingerly reached out a shaking finger to touch the shoe but was propelled back with such force that slammed me into the rear wall breaking a fingernail.

Dazed and confused I pulled myself up now very wary of this ancient relic that was suddenly pulsating brightly and emanating an aura of pure terror within me.

I could go close…, but not touch? 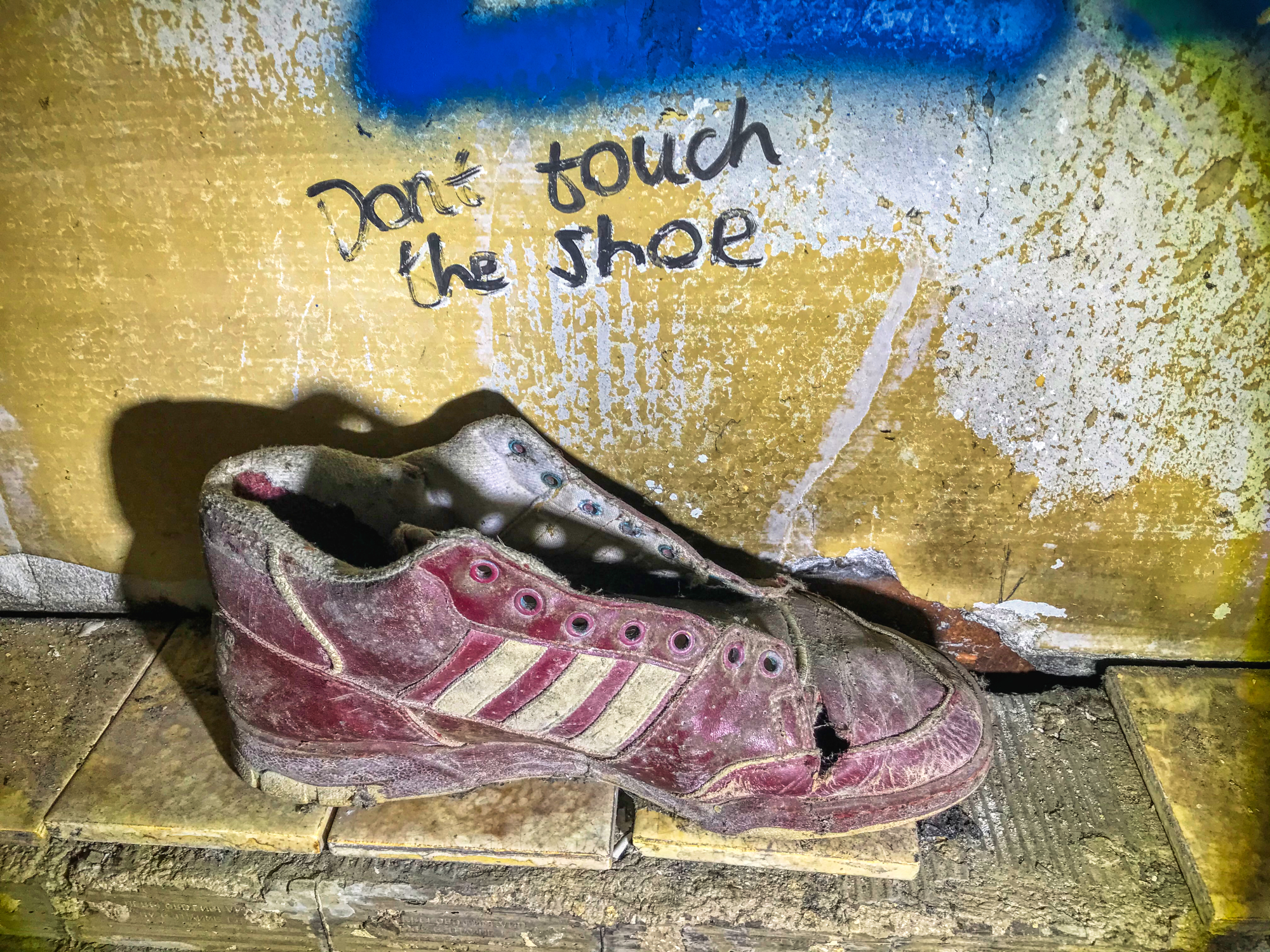 That battered shoe was made of real leather and was that genuine Adidas? I slowly backed off fearful I was looking at the very shoe that Ben Johnson wore in the 1988 Olympics when he was disqualified for doping. 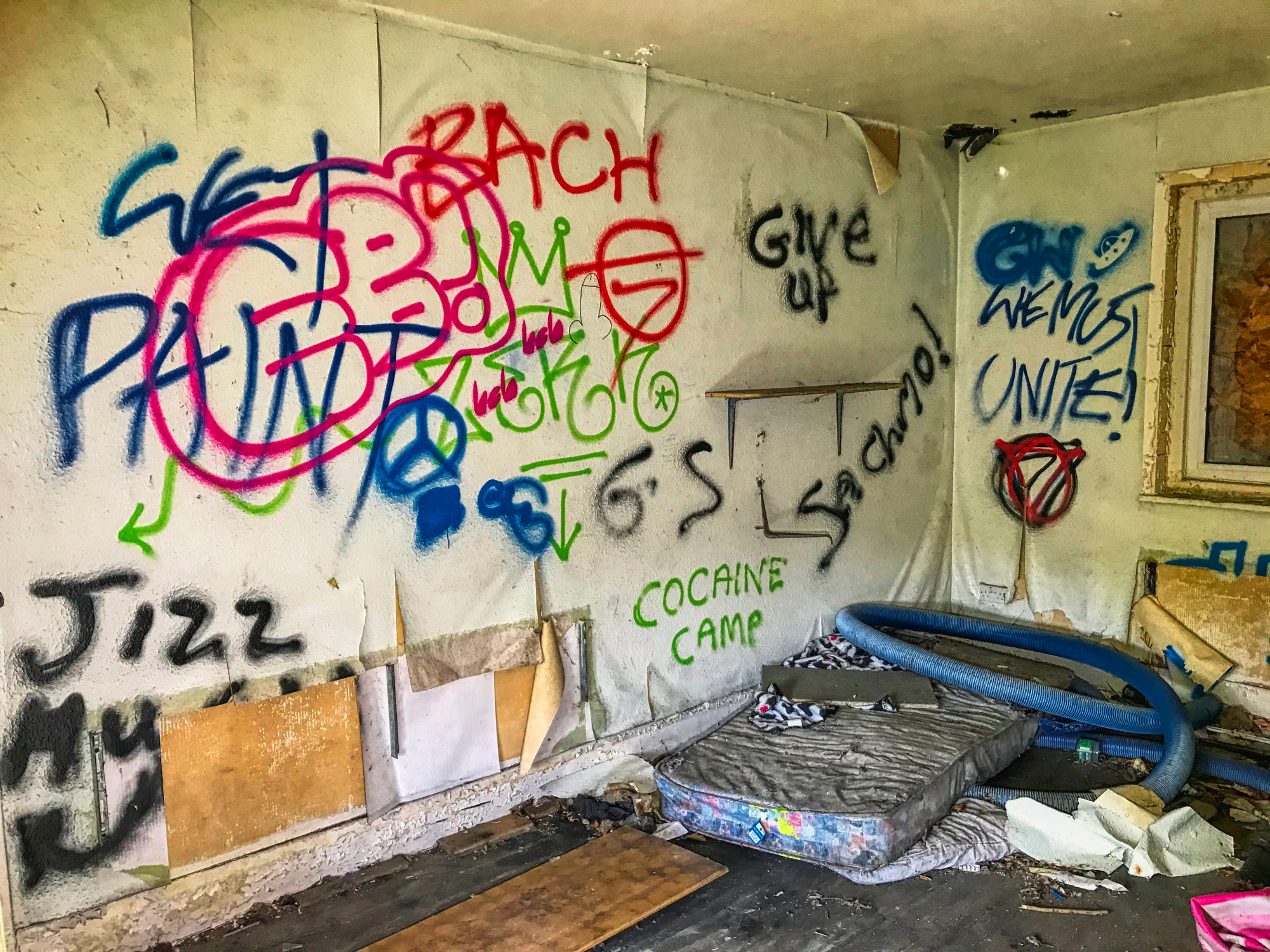 Fuck the shoe I thought there’s other bullshit to look at here and a cursed shoe was not going to scare me. There was a cocaine camp here, or so I was led to believe. 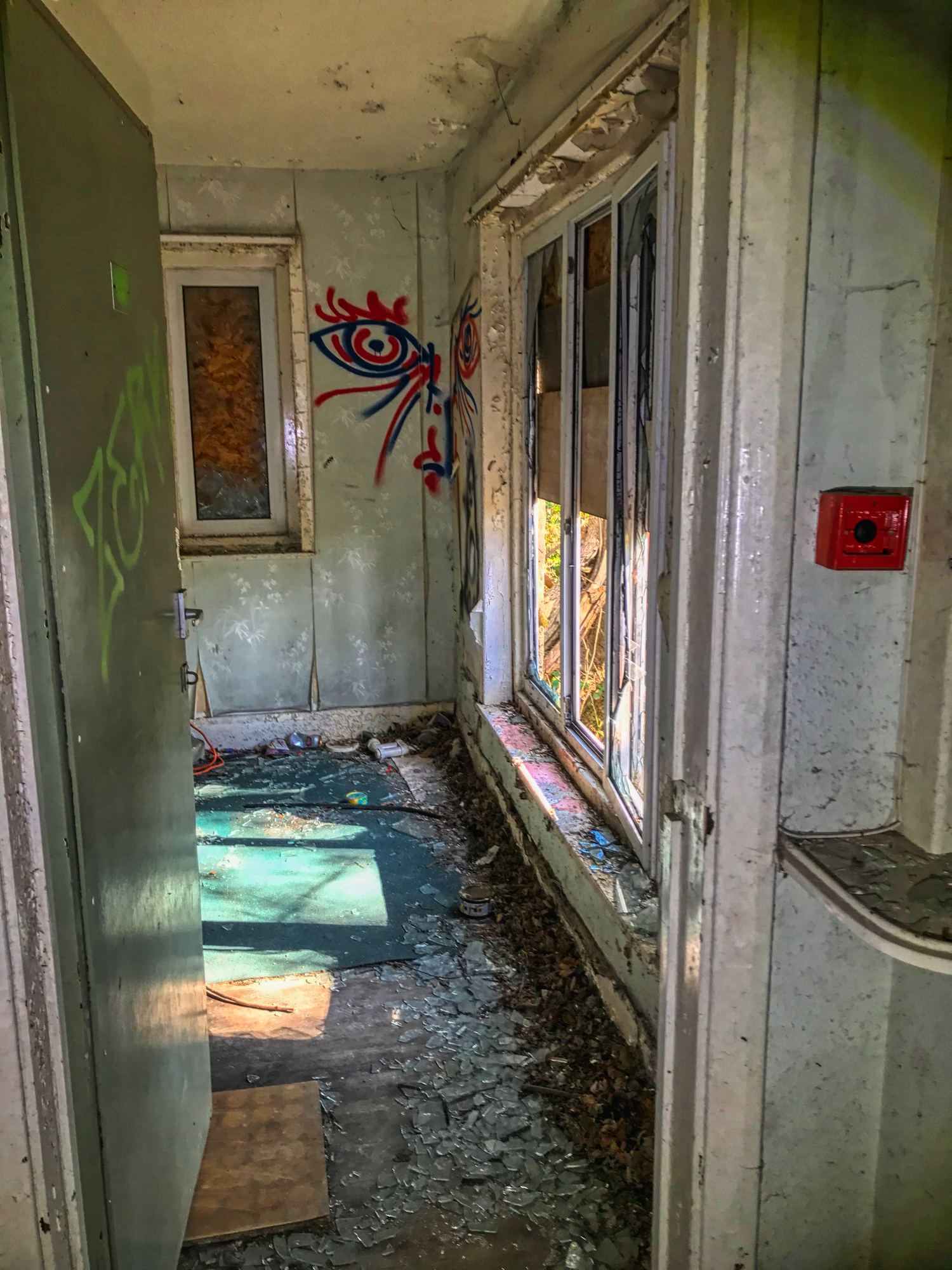 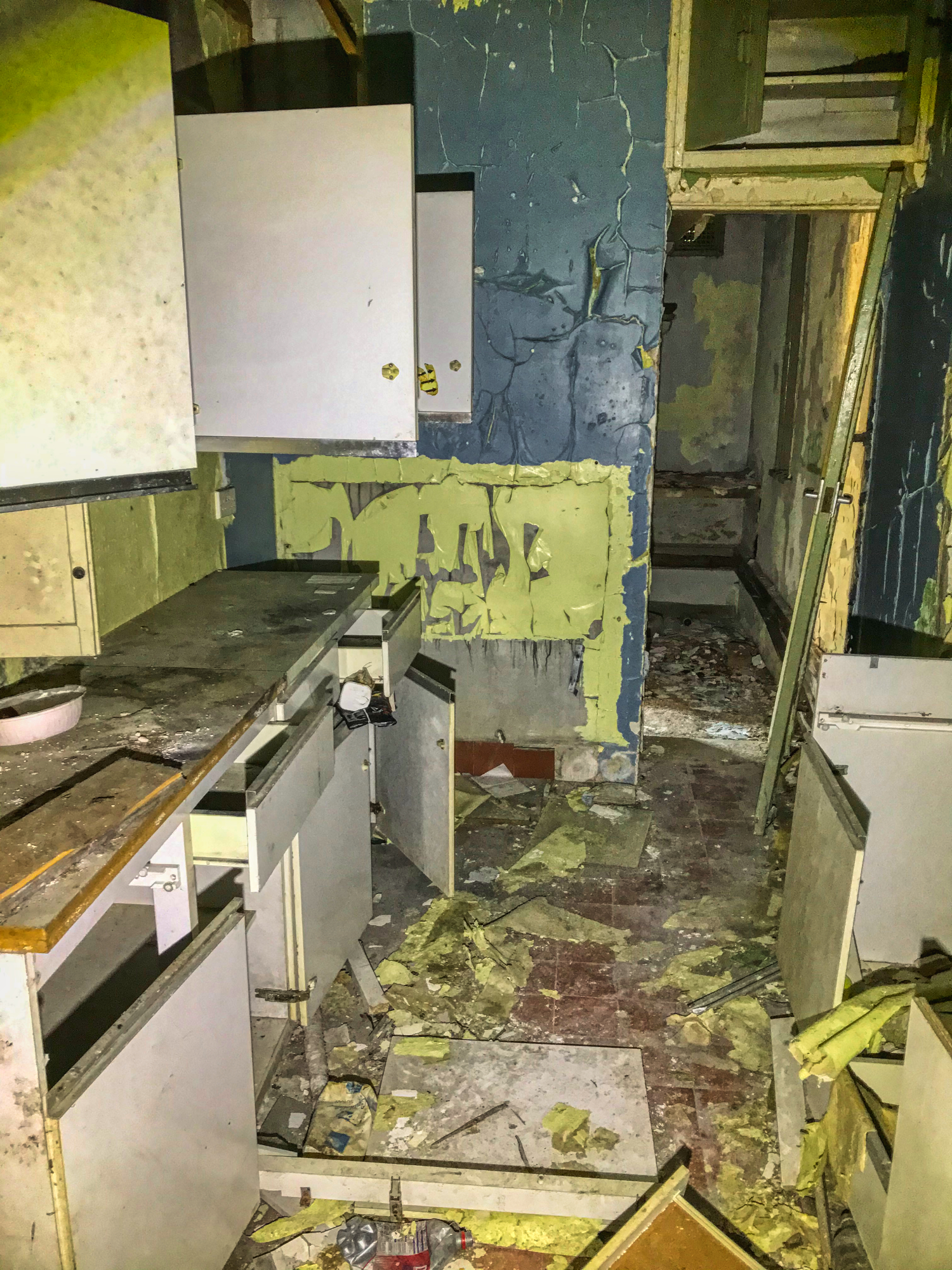 Leaving the ‘shoe room' behind I spotted the kitchen which had all its units intact. 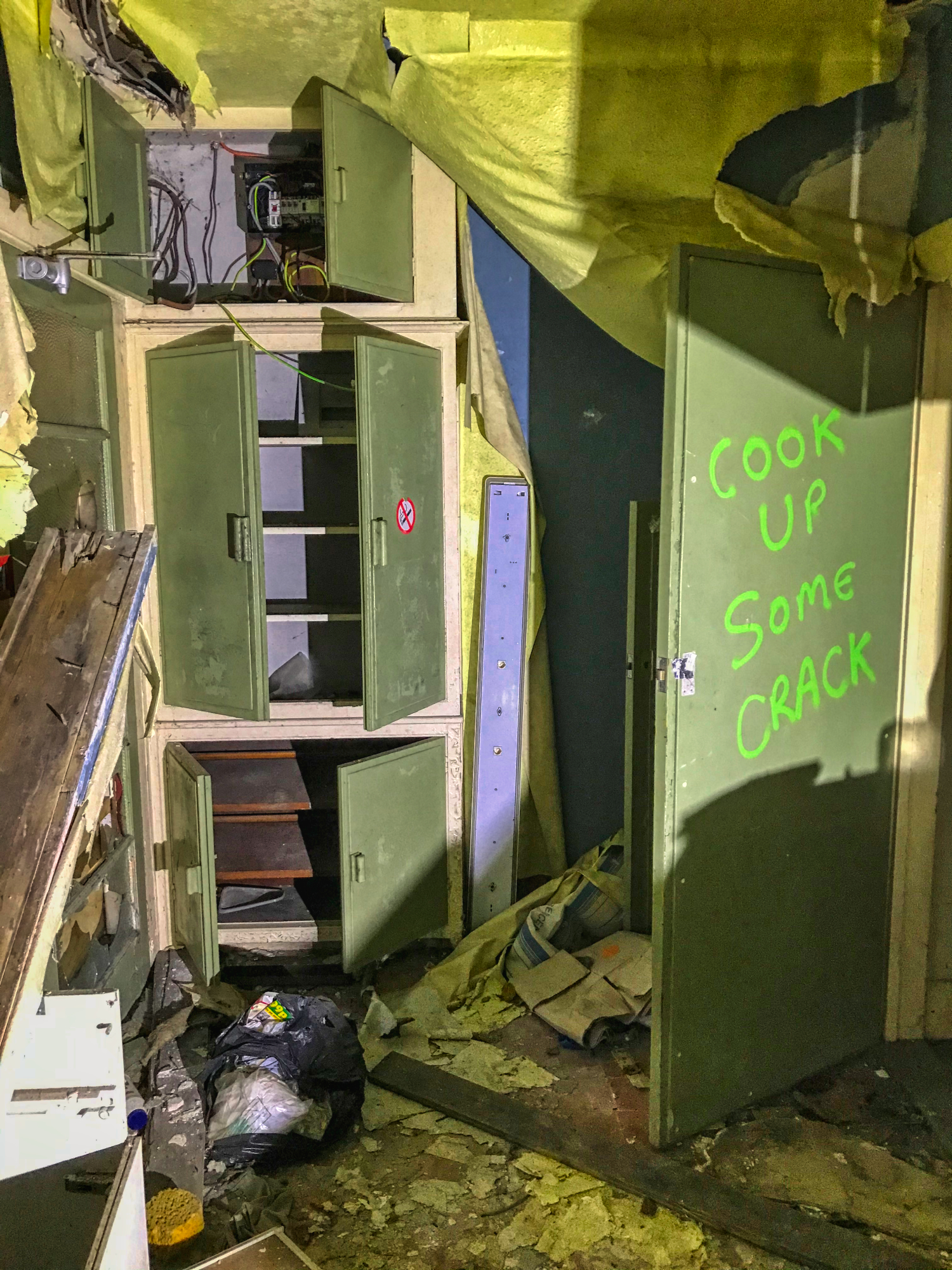 Had someone left a pile of chocolates behind in the far corner?

A closer look revealed a stash of conkers or Horse Chestnuts to non-UK people. 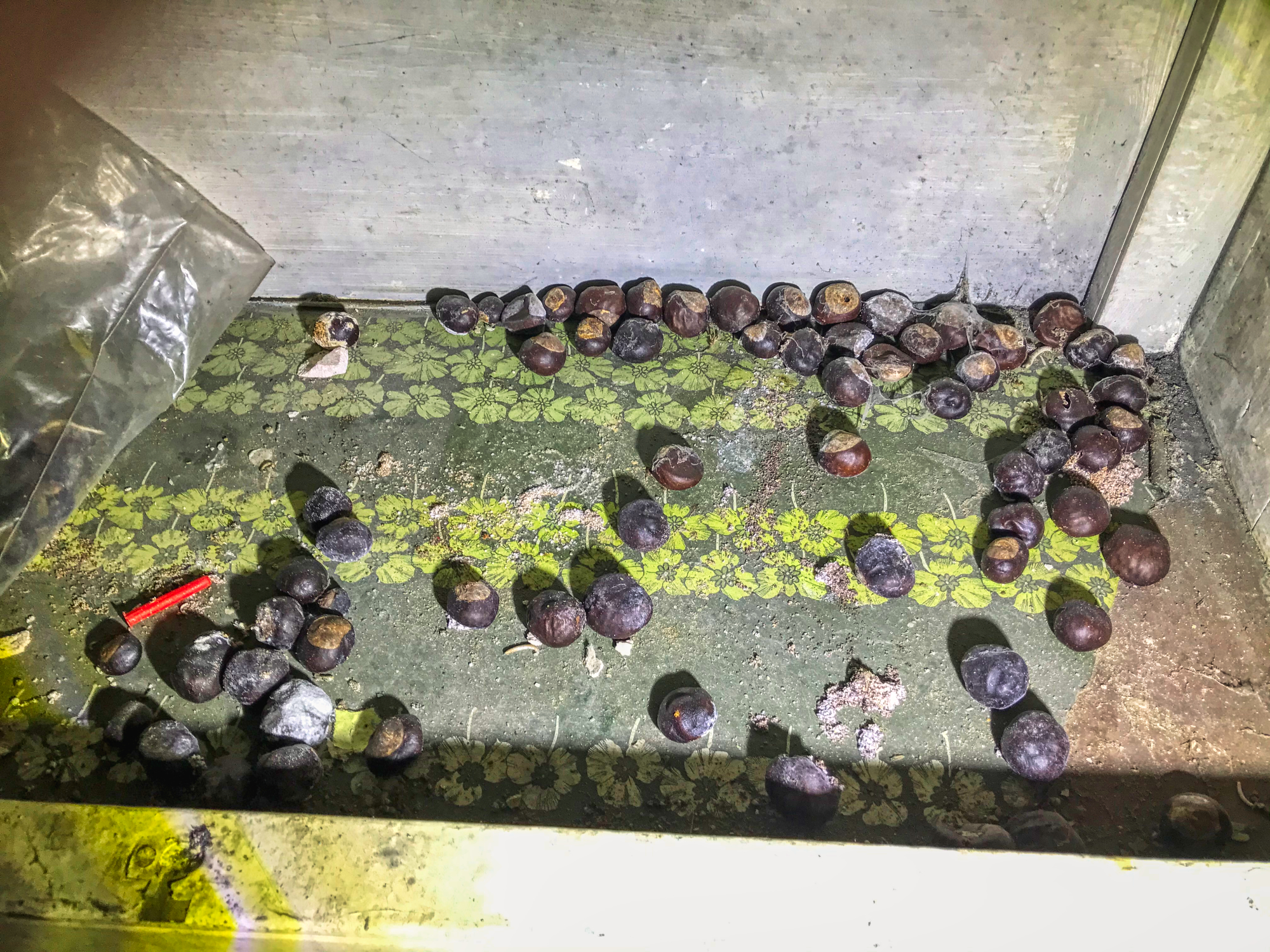 Does anyone bother with conkers anymore? 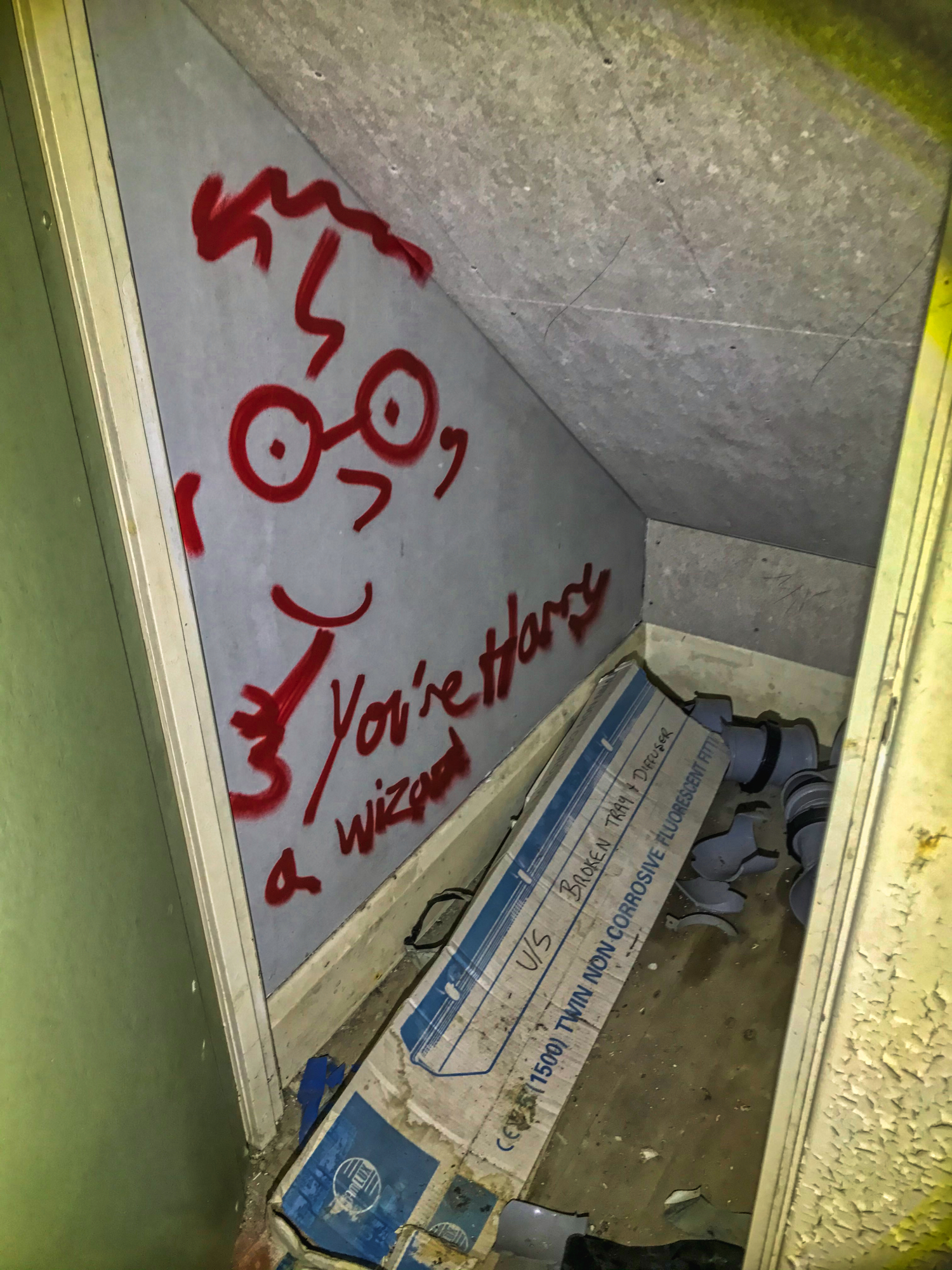 Unlike the other house, there was a little correspondence hanging around. 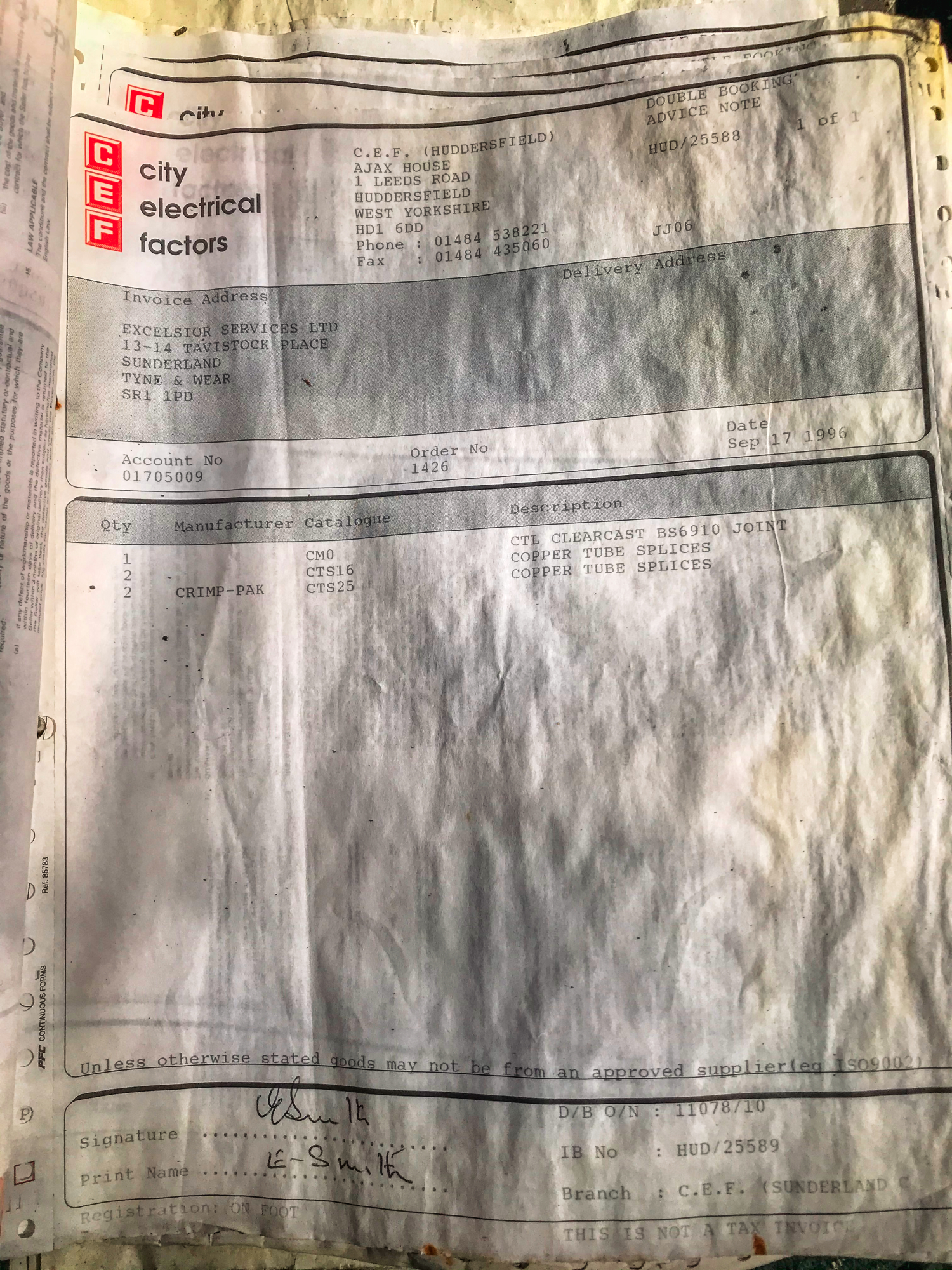 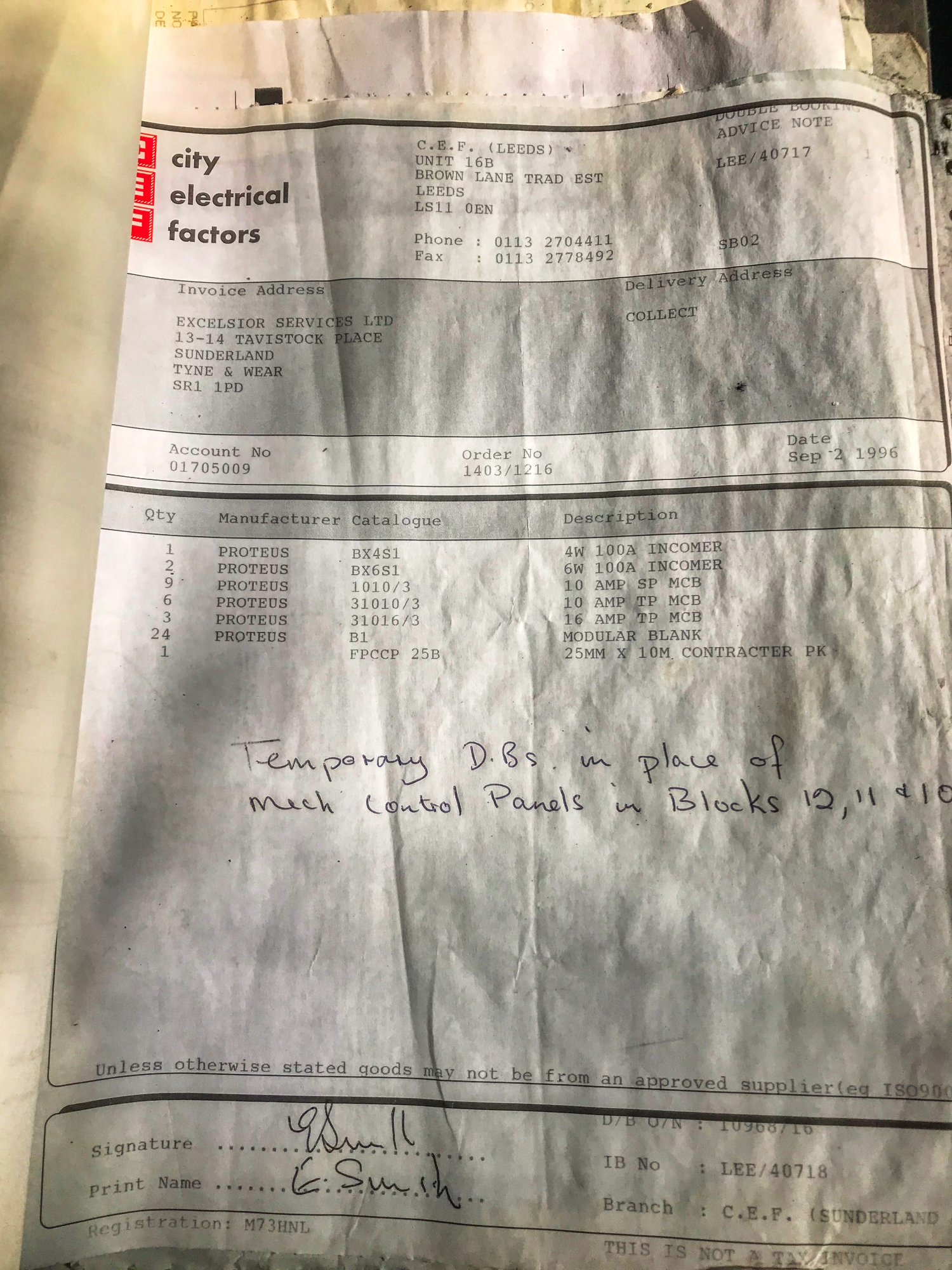 A past inhabitant appeared to be a tools trader. I saw more than one of these invoices scattered around. 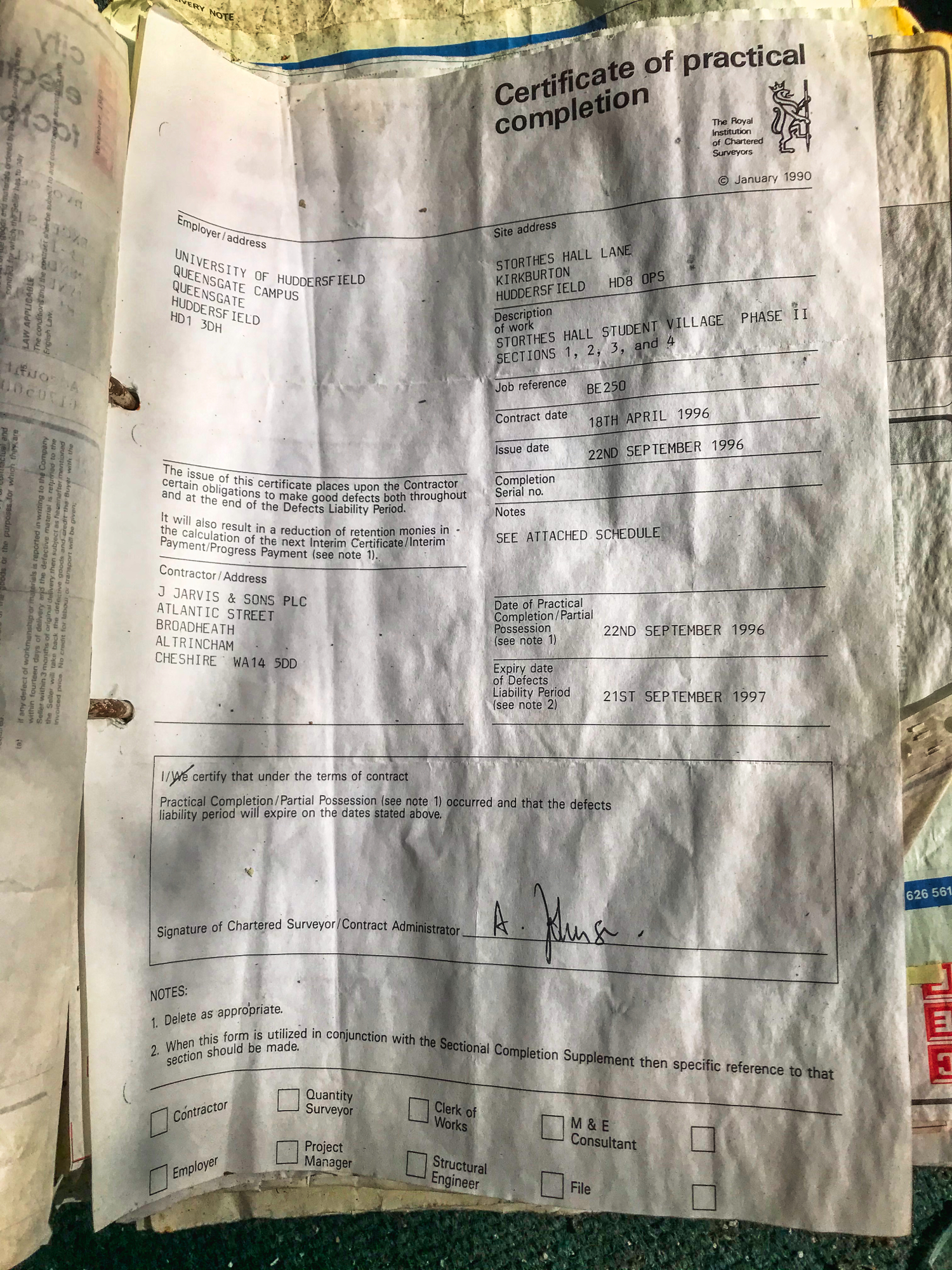 The same person had also completed certificates while living here. Everything was dated around 1996. Surely it had not been empty for that long? 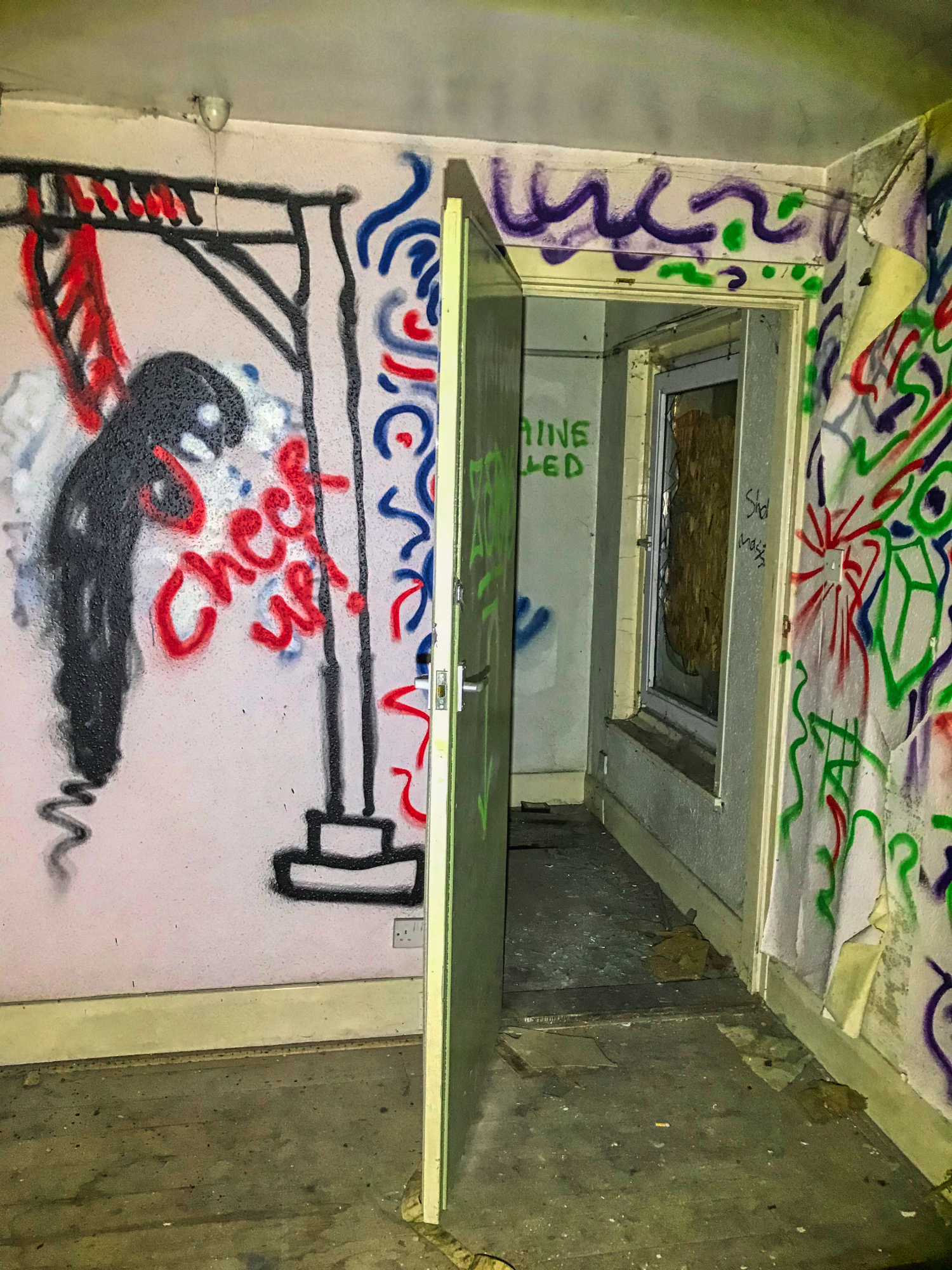 The style of graffiti was astonishingly similar to that of Storthes Wood Lodge. Not too surprising as the old Lodge is less than a mile away. 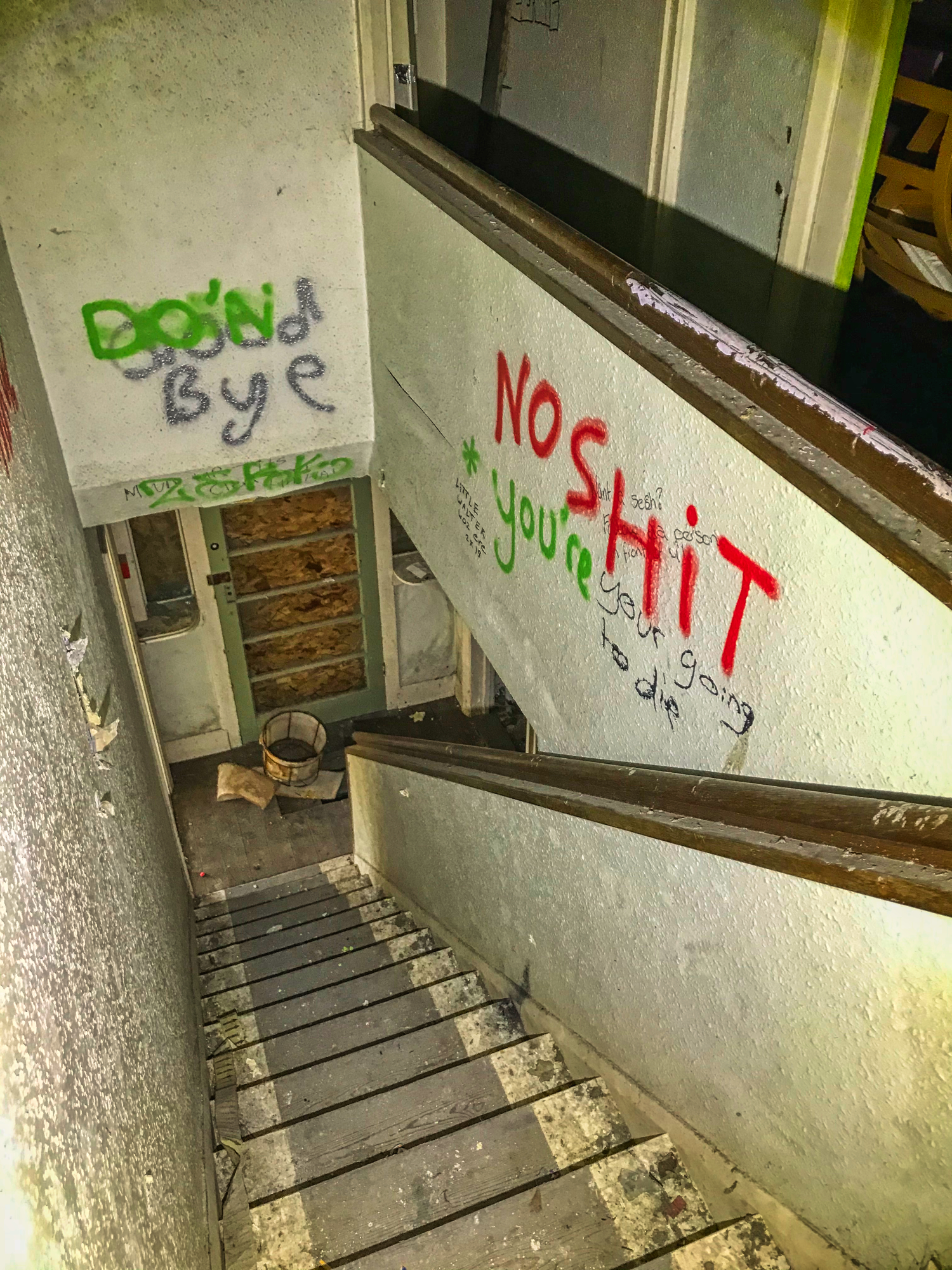 The number of times I have been told ‘I am going to die’ if I go here or there is getting old. 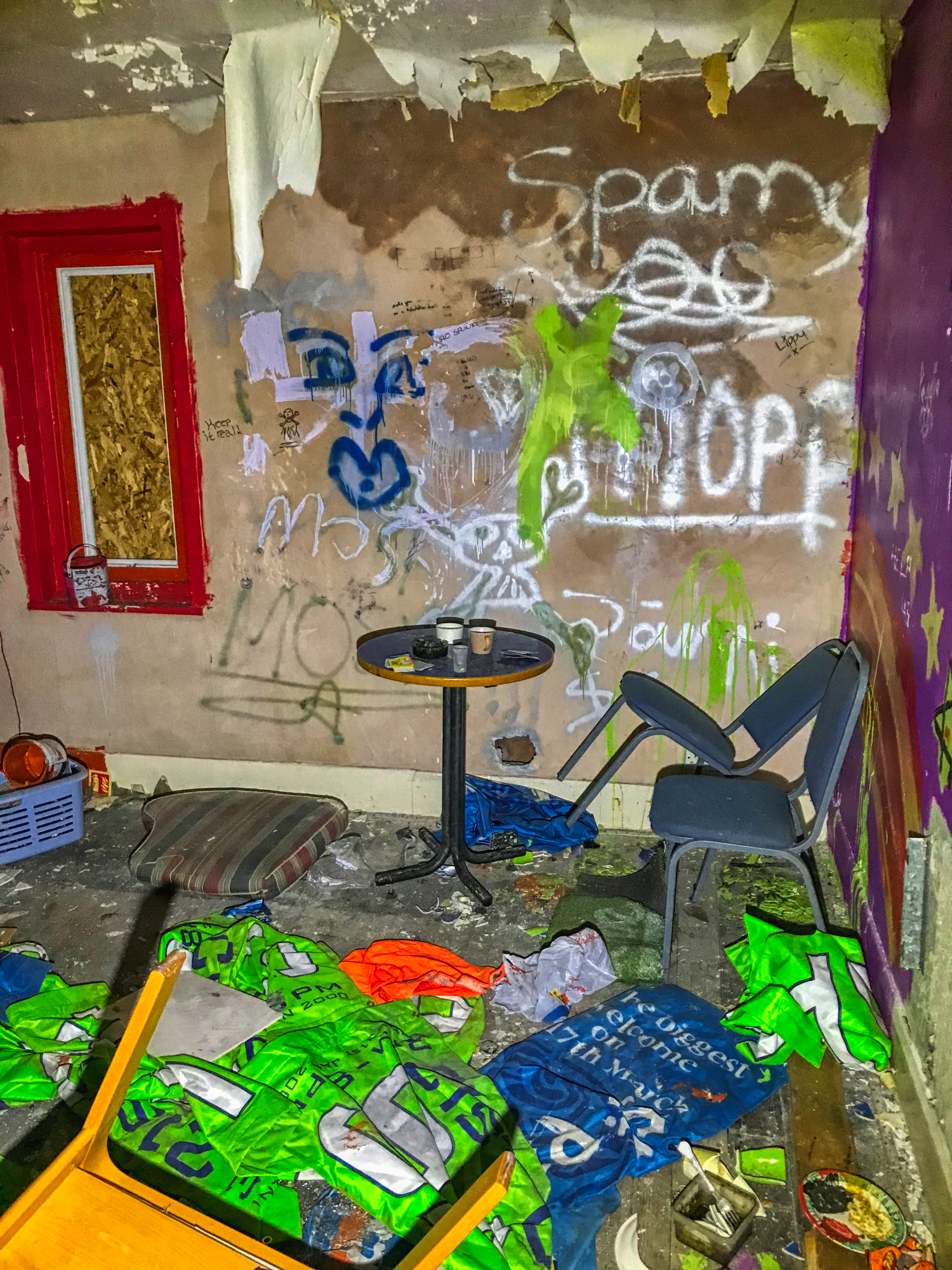 Chairs and cups. Was there someone living here, or are they old ones? 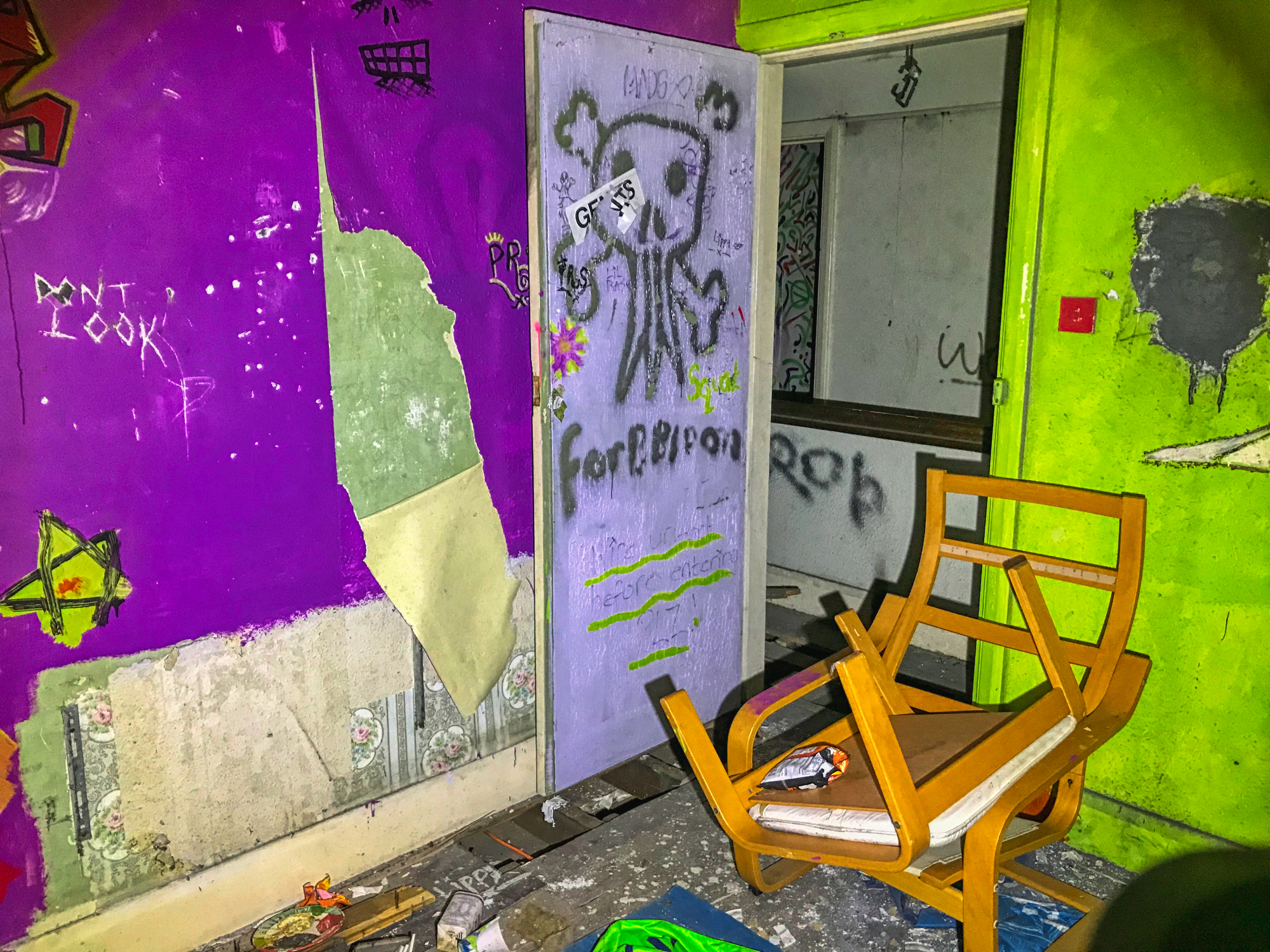 The style of colouring and décor could be suitable for young kids and no one else. 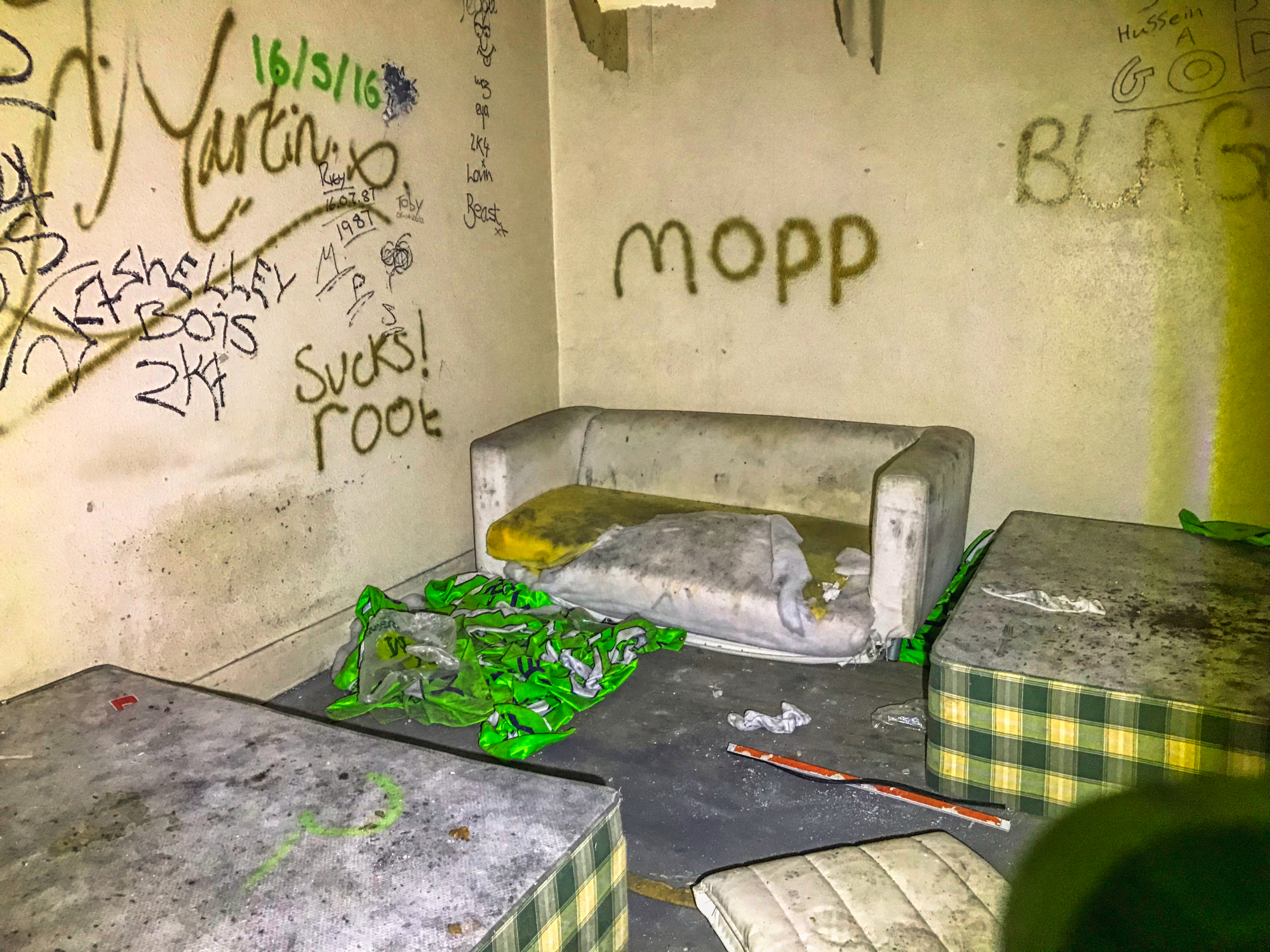 Beds but no bedding; The upstairs areas were dry yet I had the feeling no homeless were living here. 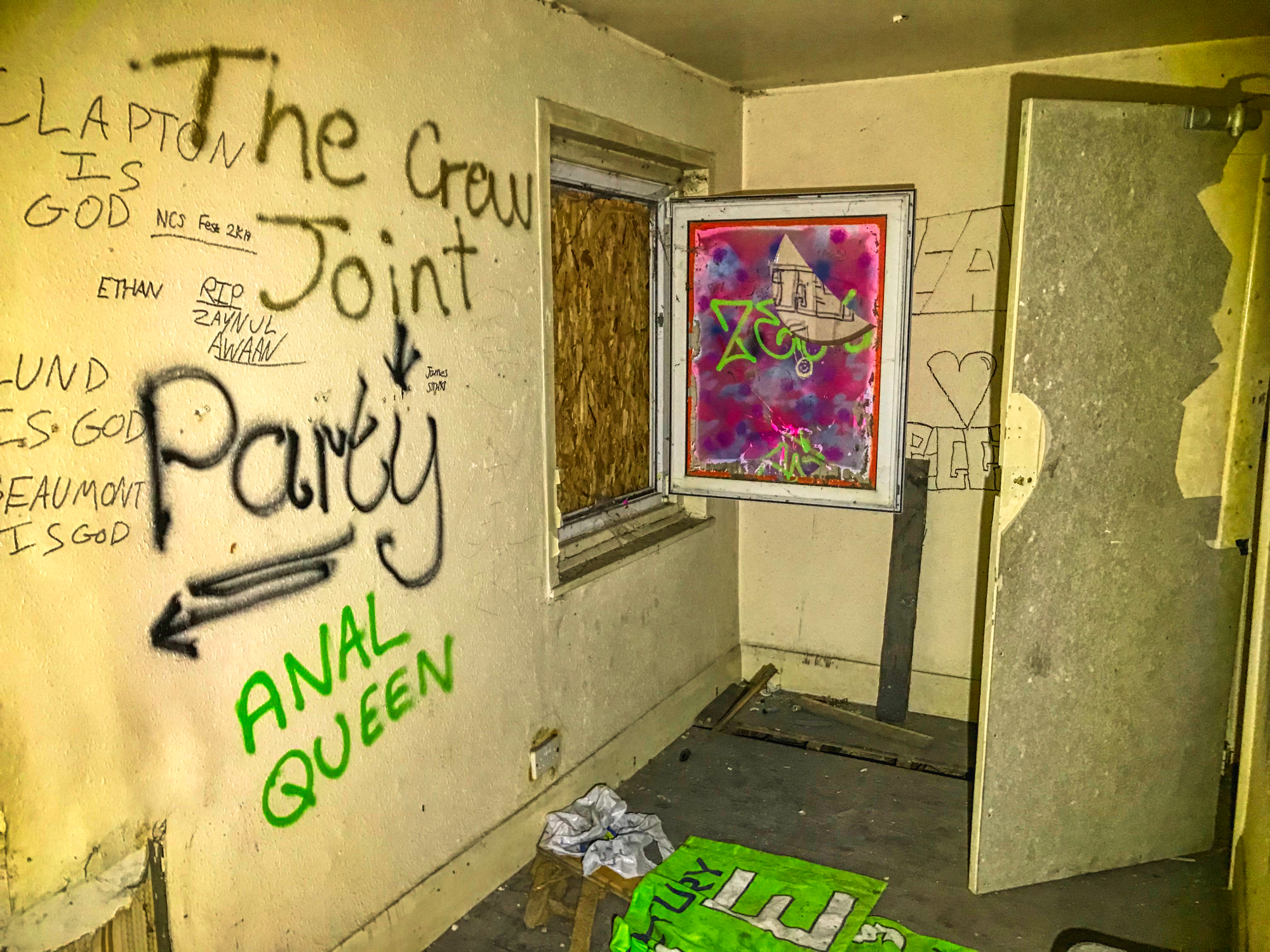 If I was easily offending by all the writings I would have stopped exploring years ago. 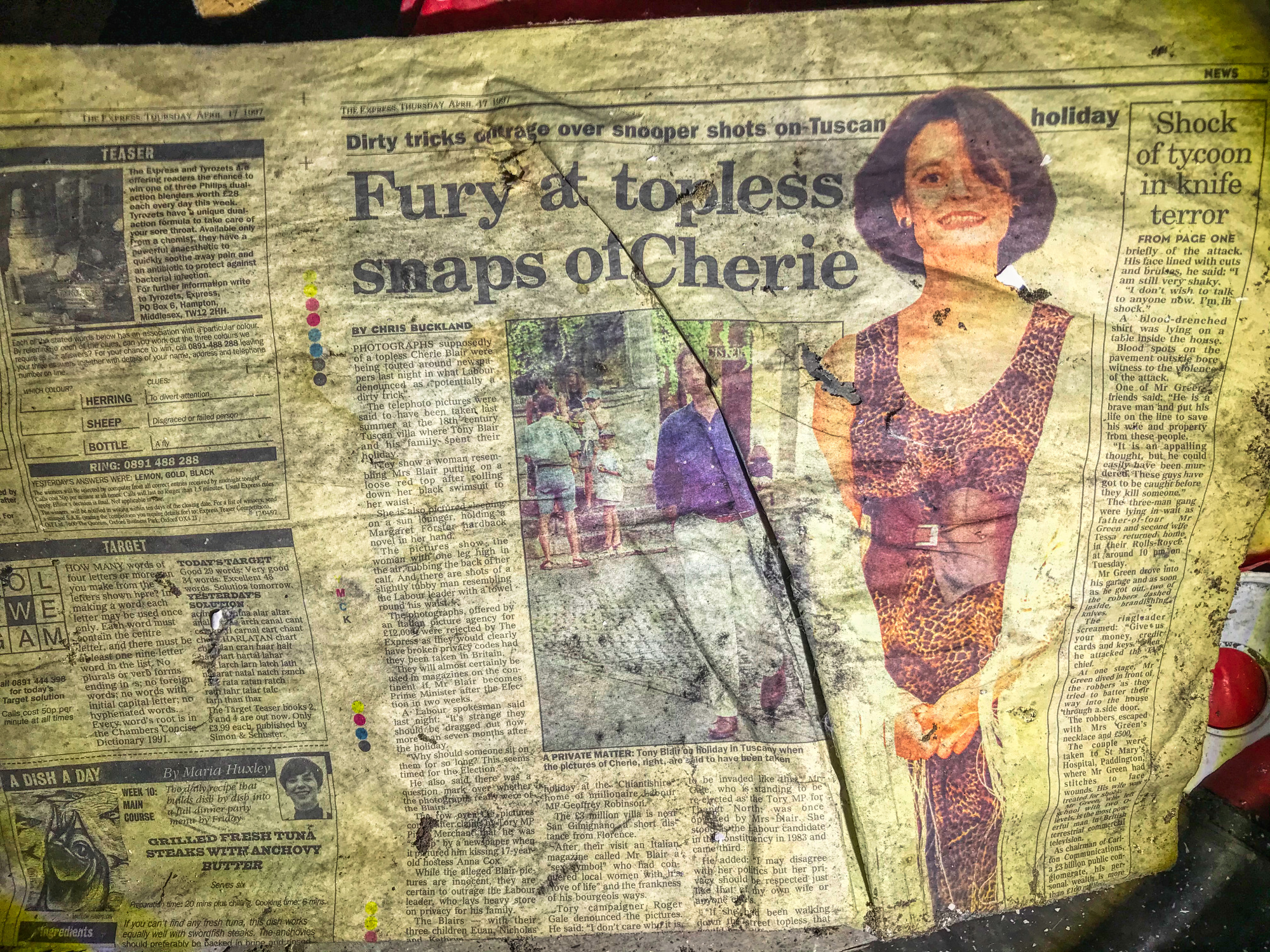 A sign of the times; Tony Blair had been elected our Prime Minister just a year before. Of course, his wife had to go topless to cause him some embarrassment. 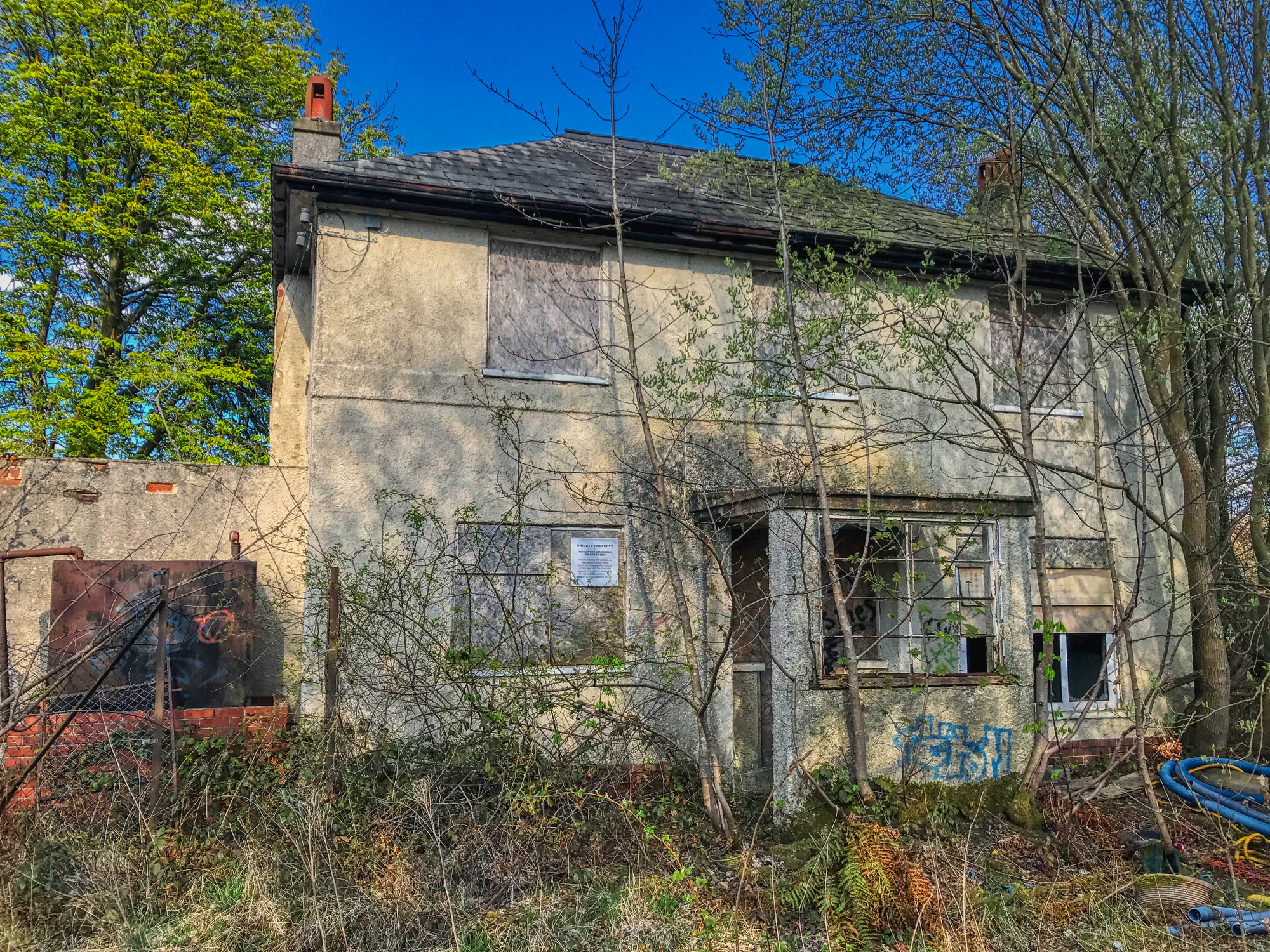 There was little inside 'Creepier House' beside the dreaded shoe and a ton of graffiti. 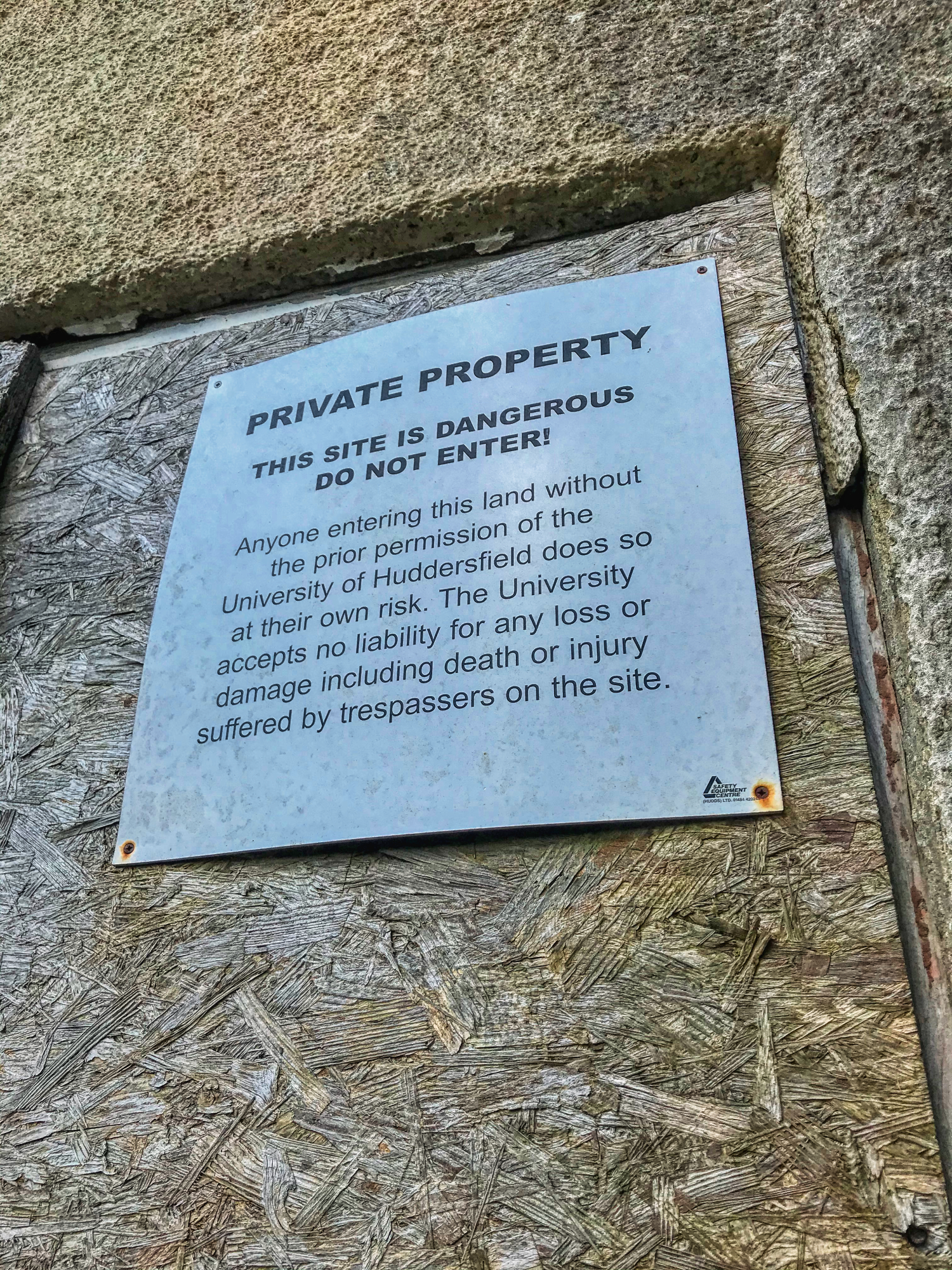 I peered at the sign on the outside of the house while exiting. It was the usual dangerous building sign warning me not to enter. 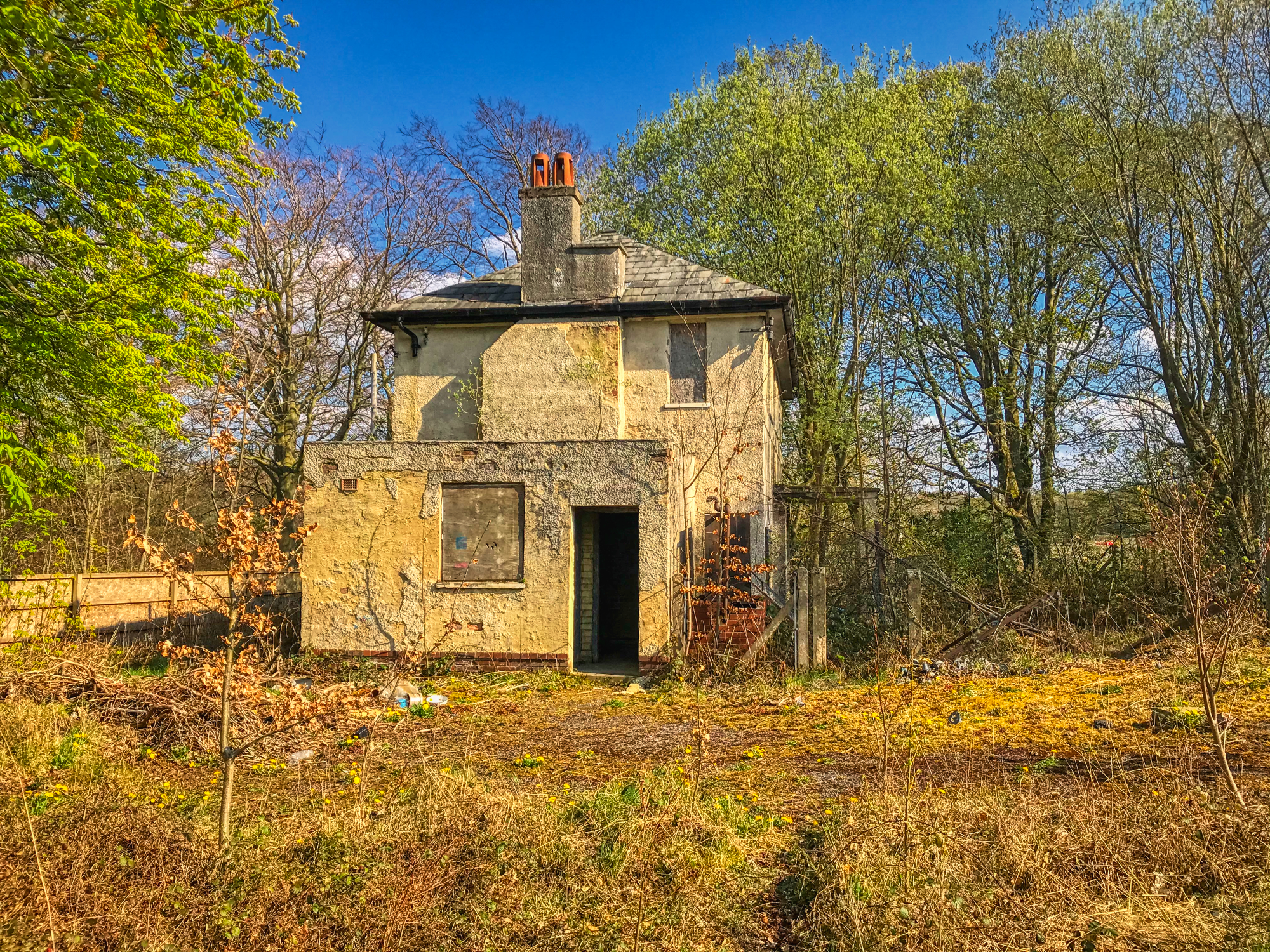 No warning about that shoe. Had it all been a bad dream?

Creepy old shoe where did the other one go, perhaps you touch one and the partner comes out of hiding...

Appears more than conkers got cracked inside!

No touching the shoe. Warnings must be in graffiti should always be taken seriously!

Then have you cooked up some crack before you left the building? 😂

I wish there were more of these sort of places around here for me to post about.

Do you look for them? Most people discard these sights like you do a tick of the clock. Once you start looking..., you might find more than you realise.

There's a few around but they are in military-zoned areas so I won't go in. Also, it's a vast place so often these things are a long way from where I live making it problematic to get there and back in a day. Remember that one I posted about, that whole town? It's almost 4 hours drive each way to get there. (4 hours at 110kph all the way.) So, its sort of difficult. I keep my eyes open though of course and look out for them.

Crikey, don't go in military-zones. For me these are a no-no and you can be arrested here for that.

Yeah, it's not worth a few years in prison. Lol.

If portable machetes were not illegal here I would carry one

You are already dangerous enough, no?

That shoe freaked me out when I was reading it. Oh! It's a shoe. Well, leather, it's true. But still. Yet. it spoke from beyond. I want to know why you didn't ask where his friend was? You really do need to carry a machete. In case. Shoes, you know.

We still eat conkers here, but, only over an open fire and usually with family. My brother almost lost an eye over a conker fight. Not really, but, that is the story he goes with.

Those signs mean nothing. If someone were to injure themselves here, they would still sue whoever owned the property. Pfft.

Someone has a sense of humour. I saw the shoe right away.., LOL!

Conkers were a big deal and part of my teenage years. I used to climb huge trees hoping to get the biggest ones. Even carrying a machete is illegal there? Wow. The average country kid here would make a British Bobby wet themselves.

Seems like you need to add a crucifix and pocket bible to your gear along with some gloves. Should help with the haunted shoes and such.

Carrying a knife here is an offence, never mind something like a Manchette. It does cut down crime substantially mind you! Holy water needs to be added to your list.

I'm not convinced blanket bans cut down on crimes. It just makes people into "criminals" because they have unauthorized tools. that kind of nanny state nonsense sticks in my craw.

That private property sign is unlike any you'd see here in the USA. Over here, it would just say something like KEEP OUT - TRESPASSERS WILL BE PROSECUTED. Much less friendly.

We get the 'prosecuted' word occasionally, not that it means anything here. Trespass is a civil matter in the UK.

i was enjoying my morning yoghurt whilst reading your latest exploit, then the thought of seeing the wife of the baby killer and convicted sexual deviant, with her tits out made me feel very queazy.

These old places you find is like being another world @slobberchops. We have nothing like this around where I live sadly.. I was just thinking that I could really do with some adventures in these neglected empty houses full of crap, graffiti, rubbish and ...... old shoes. Thanks for the entertainment.

Nothing at all, no derps? That sounds too sterile for me!

Jumping through the window with the agility of a pregnant sloth

I really would like to do this here once I am healed up and in better shape, but as you have pointed out, here in the States it it is a much more riskier endeavor.

Probably best not to do it over there.

Yeah, it would require prior permission, which would take some of the fun out of it.

It is very interesting how people are scared by tales of an old shoe. I suppose that was so that whoever approached there would have a panic attack, some idea of someone who lived, or lives there.

I really like your style of publication, I visit you because I was curious who supported me in my publication, and I have found this great content.

@slobberchops! I sent you a slice of $PIZZA on behalf of @manclar.

The Rising Star interviews, I was an early adaptor of the game. Anything RS I like.

That place sure looks creepy @slobberchops , and that shoe? Oh boy! would have some real bad dreams. I can just imagine what it smells like in there. Good photography, very interesting post.

@wwwiebe
about 1 year ago

If I was easily offending by all the writings I would have stopped exploring years ago.

I know, right? I mean, "Clapton is God"? Have they no regard for Keith Richards?