Fails of the Urban Explorer: A Quartet of Failures XIV

From Karen’s to Builders and then to Hermits who look like Penguins, we have seen it all. Sometimes I can’t even get shots of failed attempts as some angry bastard is chasing us down the road with threats of violence or calling the cops. 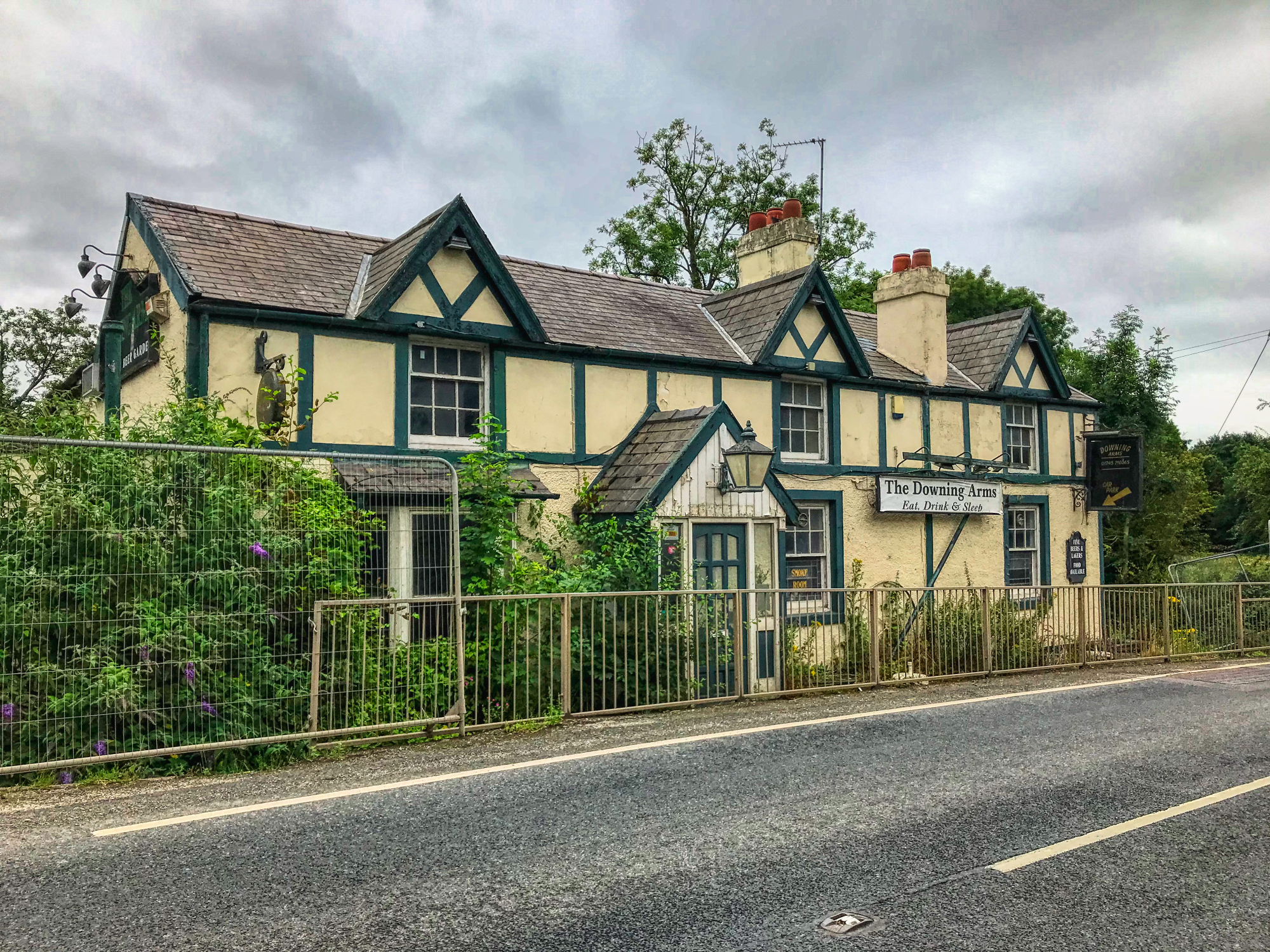 We would rather stay incognito and avoid confrontations. After all, we could be on to the next thrilling derp instead of pointlessly answering PC Plod's demands of… 'Name, Address'... knowing full well nothing is going to come of it.

The Penguin man incident happened only last week in Wales where an old ex-time capsule had been taken over by a strange half-man, half aquatic beast squatter.

@anidiotexplores was suddenly running for his life and advising me to do likewise which resulted in yours truly not getting even a single shot.

Apologies for the lack of abominations in this post, but I can show you some other interesting fails with their mini-tales to boot.

I know @grindle has failed on two occasions to get inside this permanently closed pub in North Wales. We were not expecting any change but then again it does depend on your level of daring. 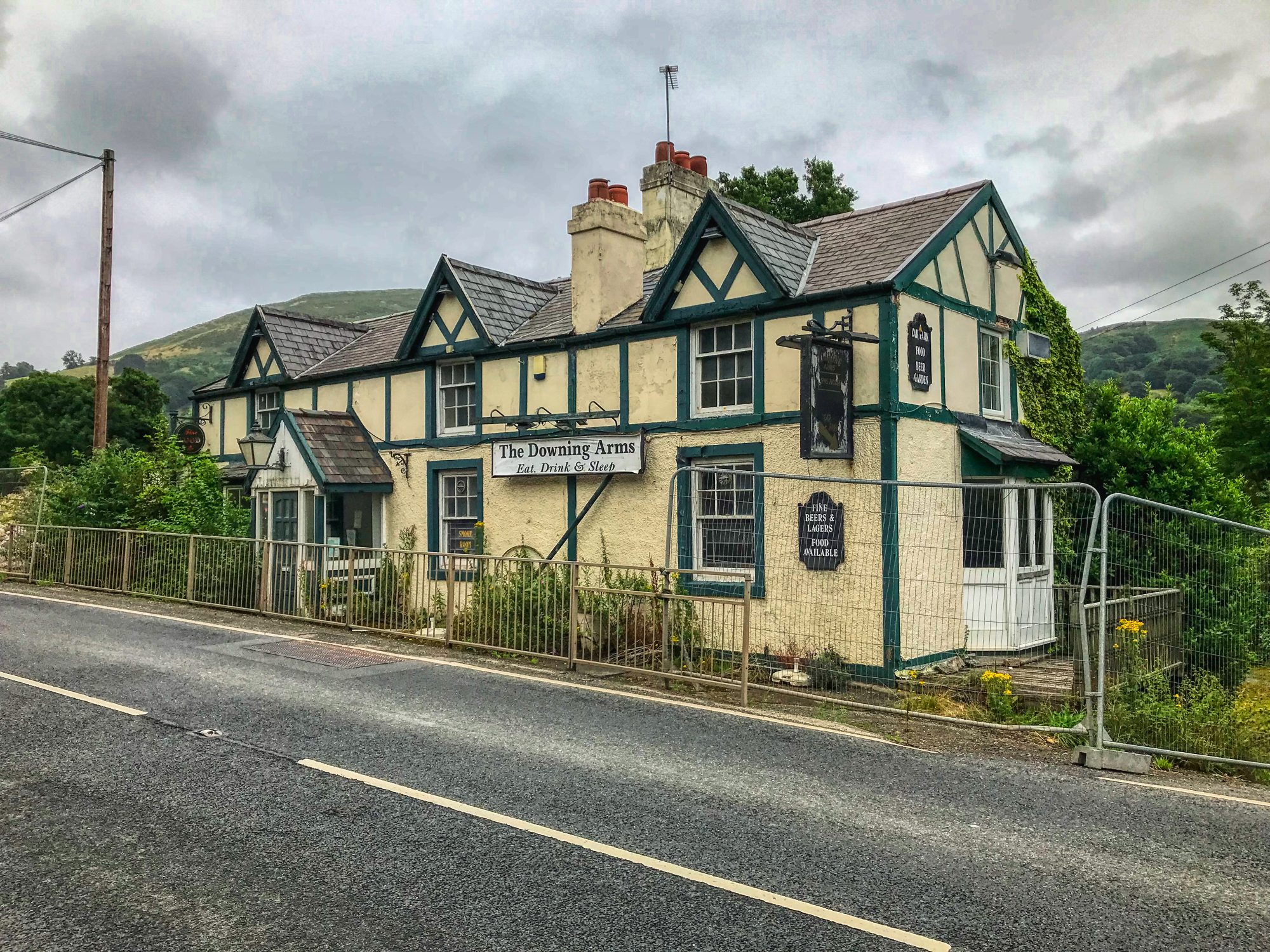 I looked through the windows to see a well-presented pub left since it was closed. No damage, no graffiti, or anything else untoward. 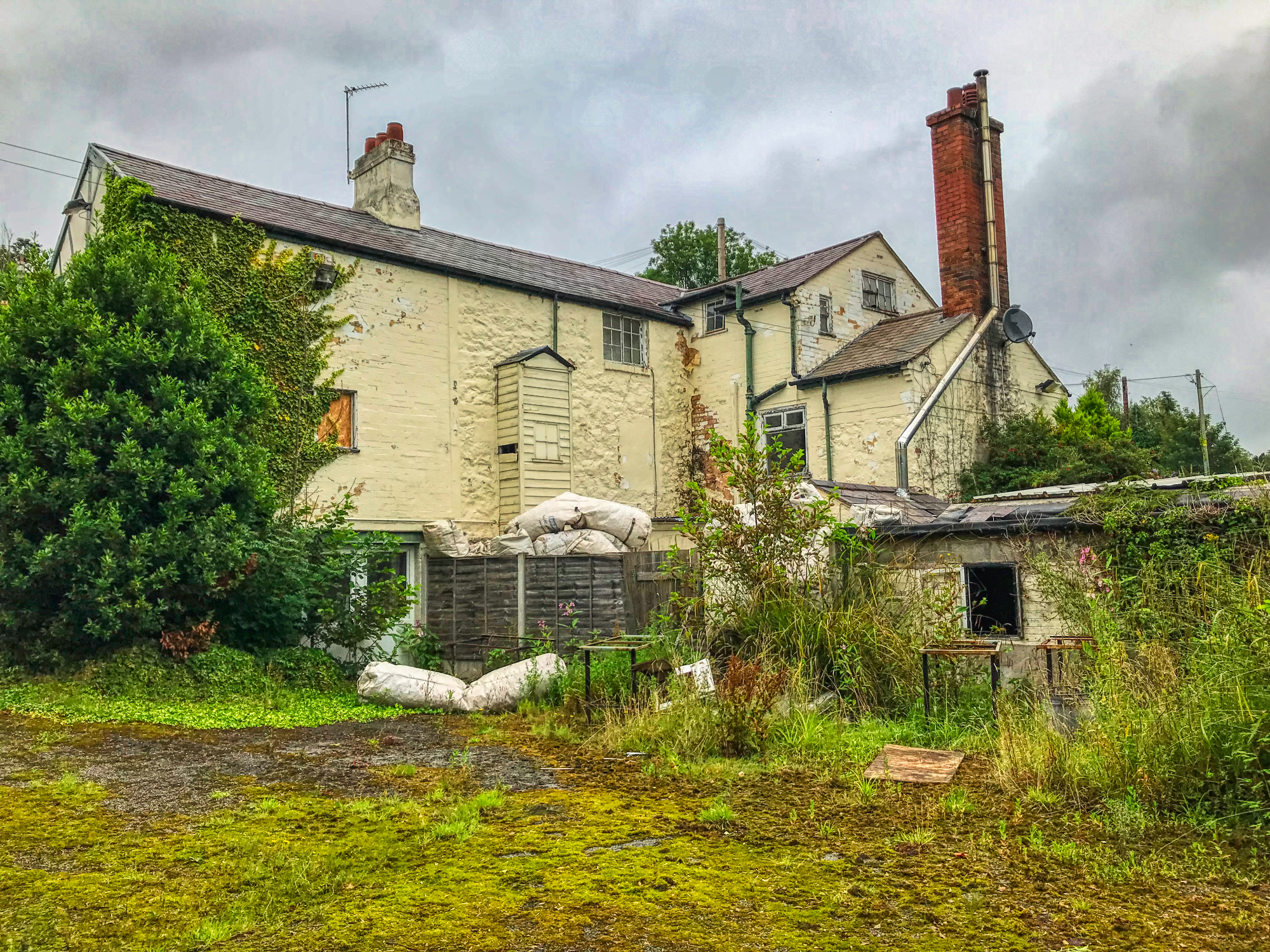 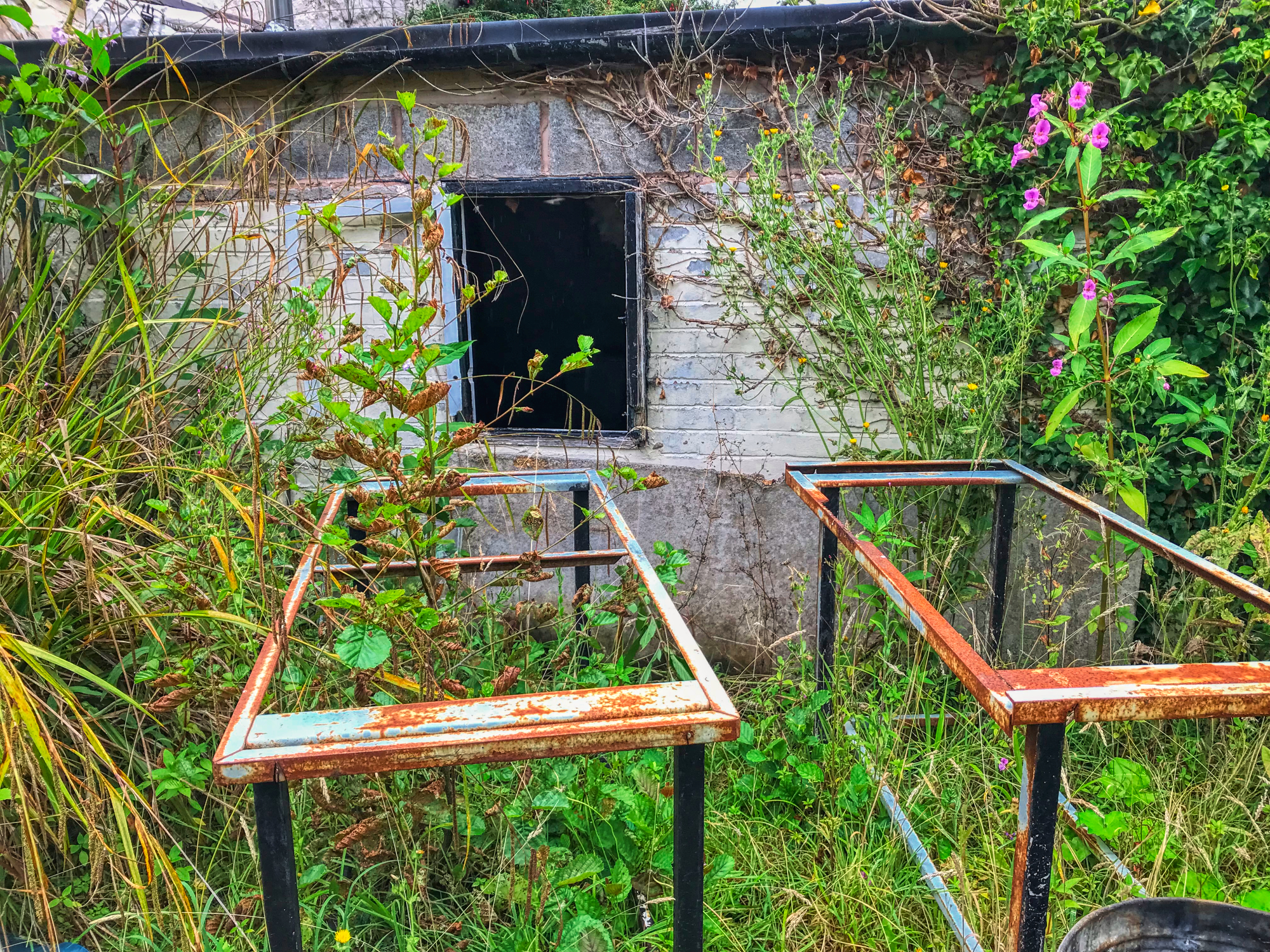 An inviting hole around the back but sadly it led to nowhere. 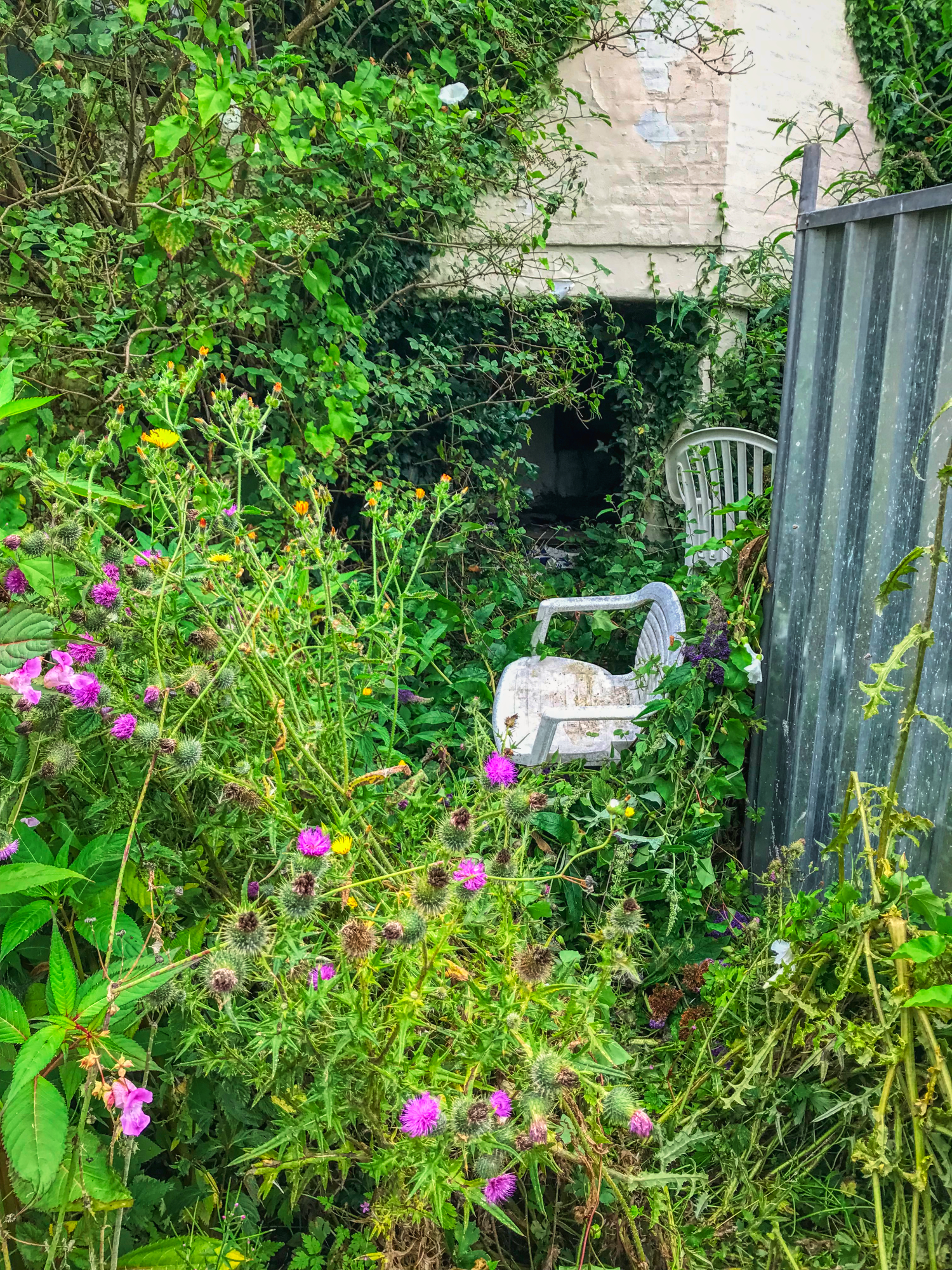 Another hole that was very hard to get to. We used a series of plastic chairs in a kind of chain system to stop getting pricked alive, talk about being inventive! 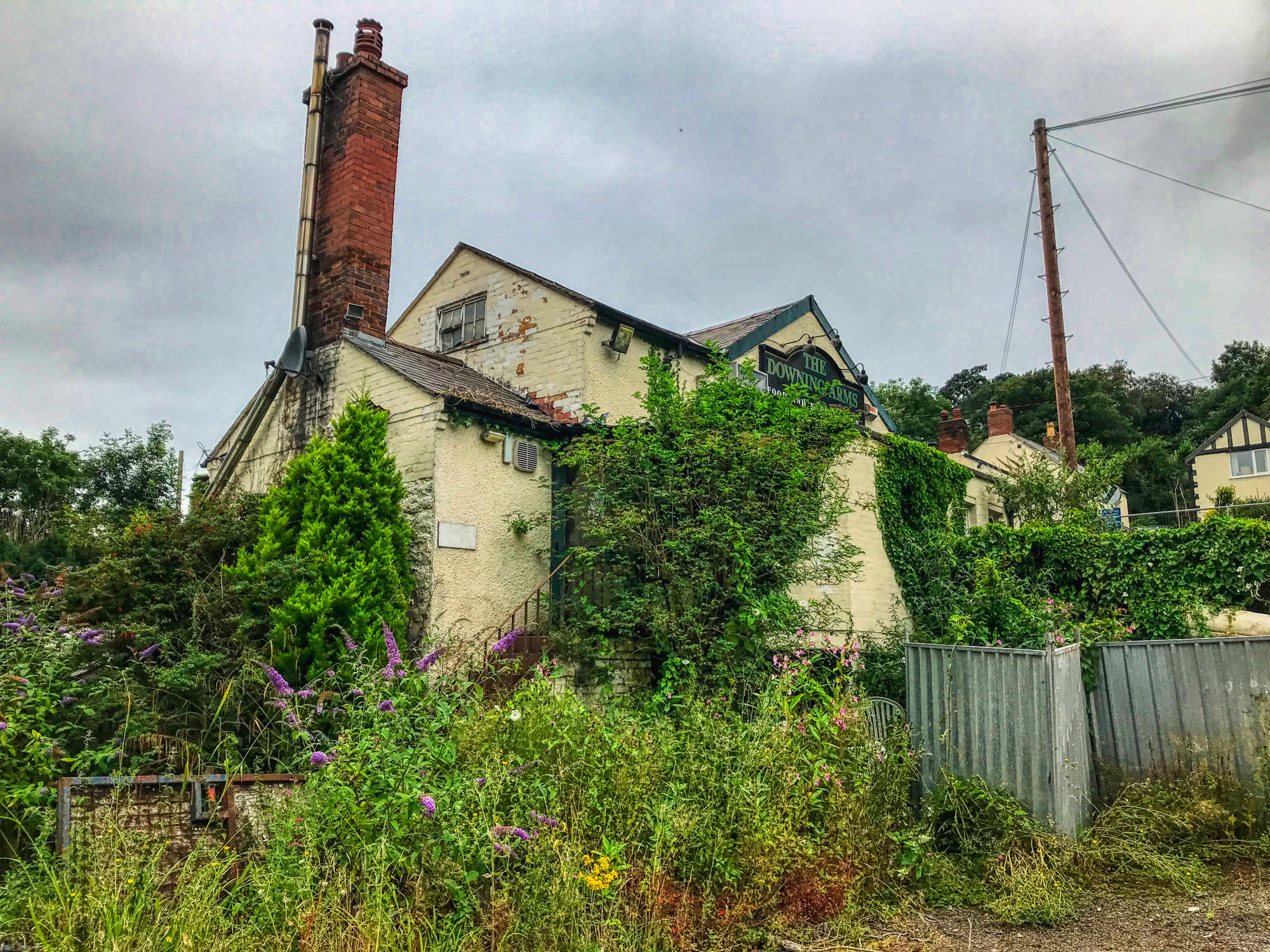 Just inside were rusty metal bars secured with a hefty lock. It was not going to happen and so we exited before the nearby neighbours started to notice us.

Nobody has managed to get inside this old Victorian theatre for some time. Built in 1901 I was under no illusions of entry but still wanted to see what it looked like. 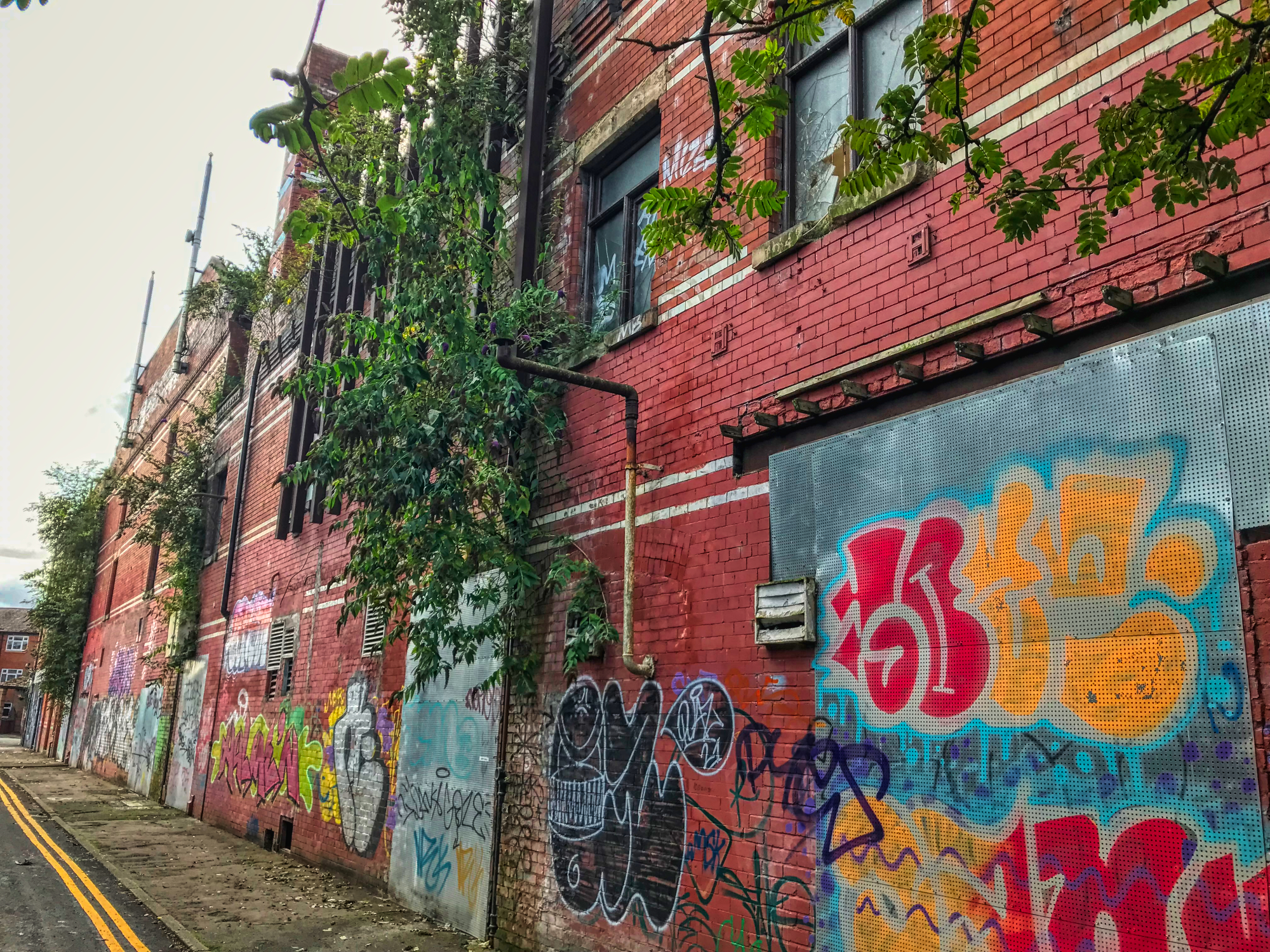 It reminded me of Victoria theatre in terms of the red-bricked styling but more graffiti-laden. 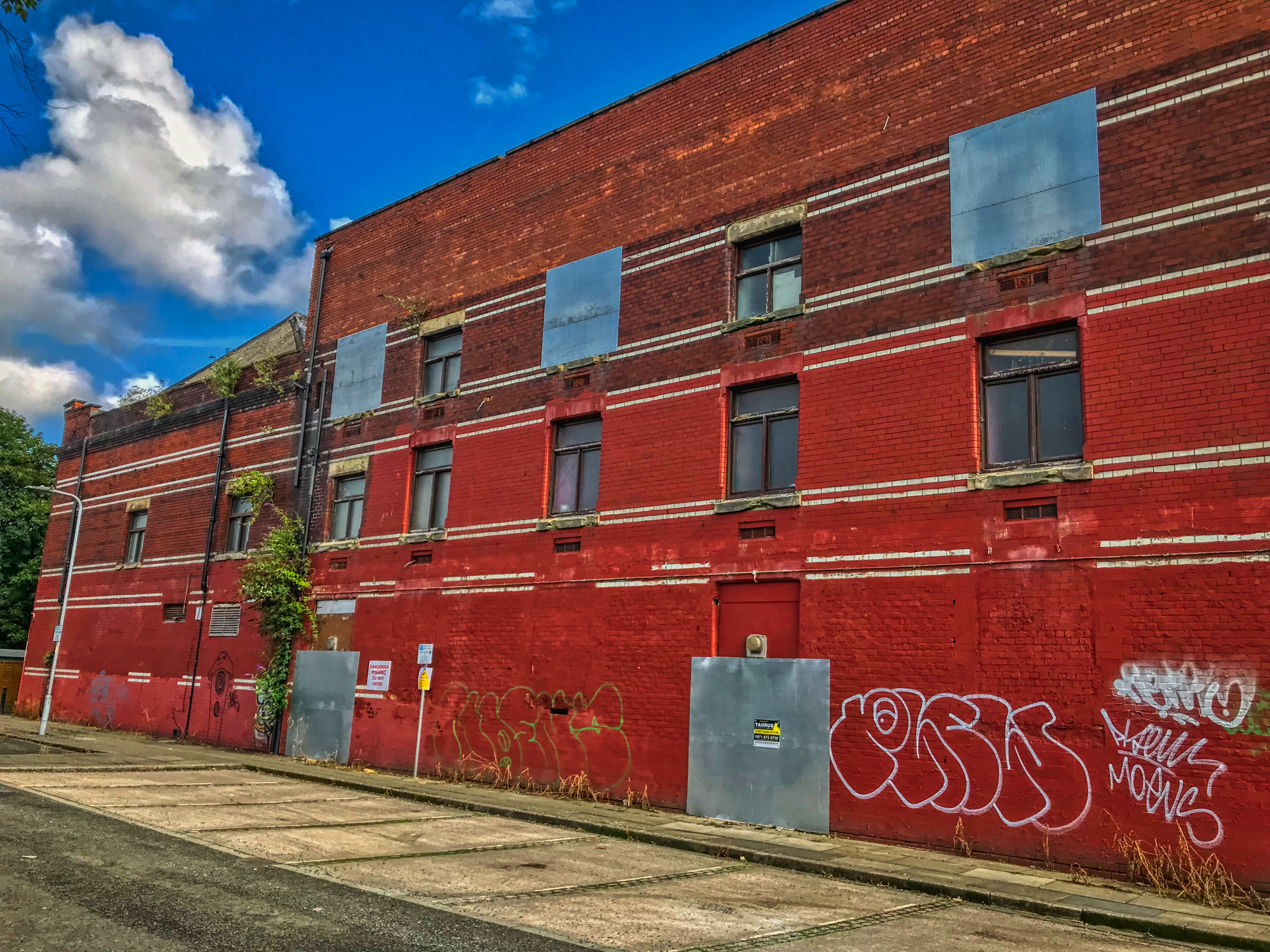 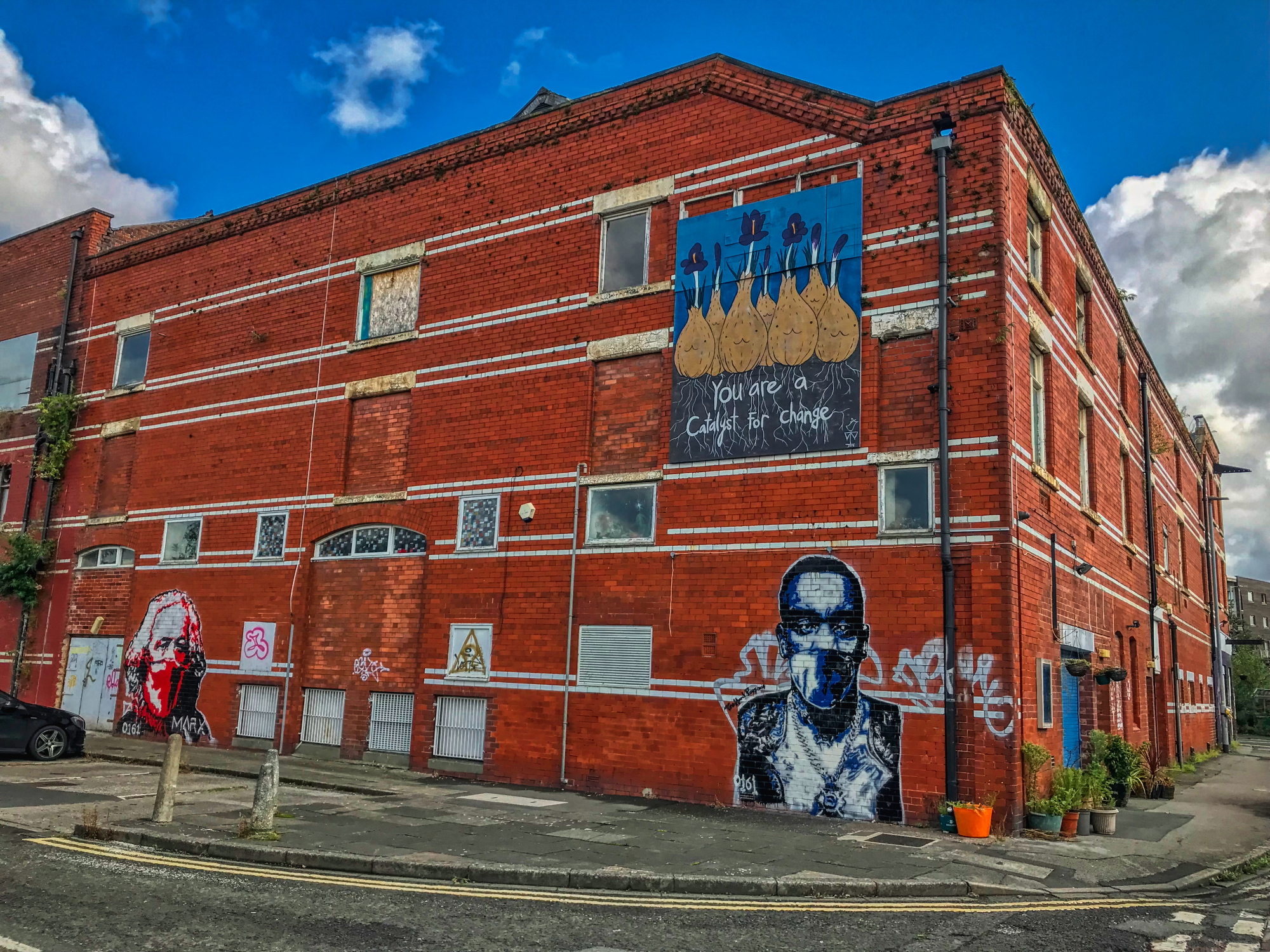 Not all was bad with some interesting murals and artwork emblazoned on the outside walls interlacing with the trees growing from various sources. 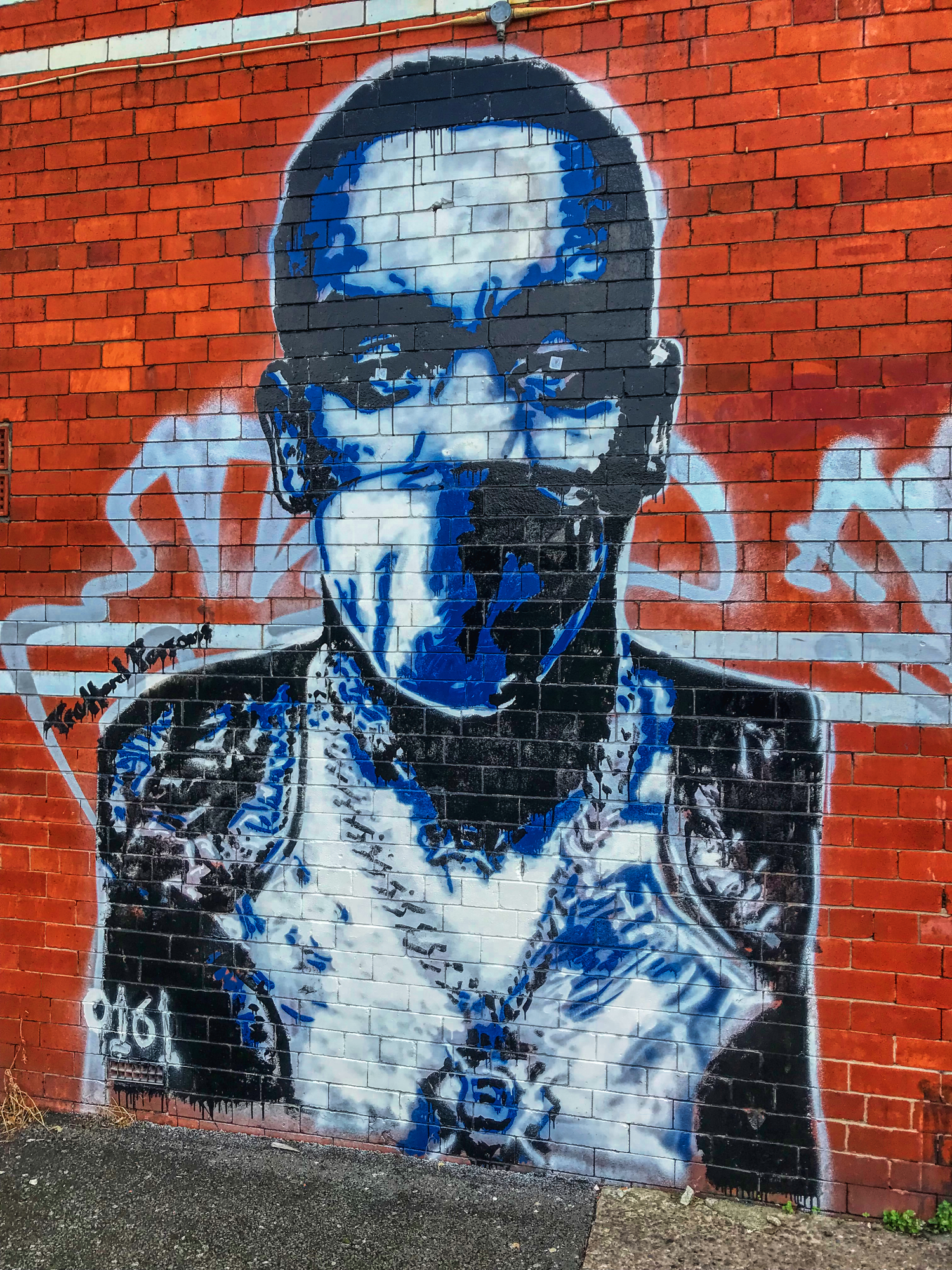 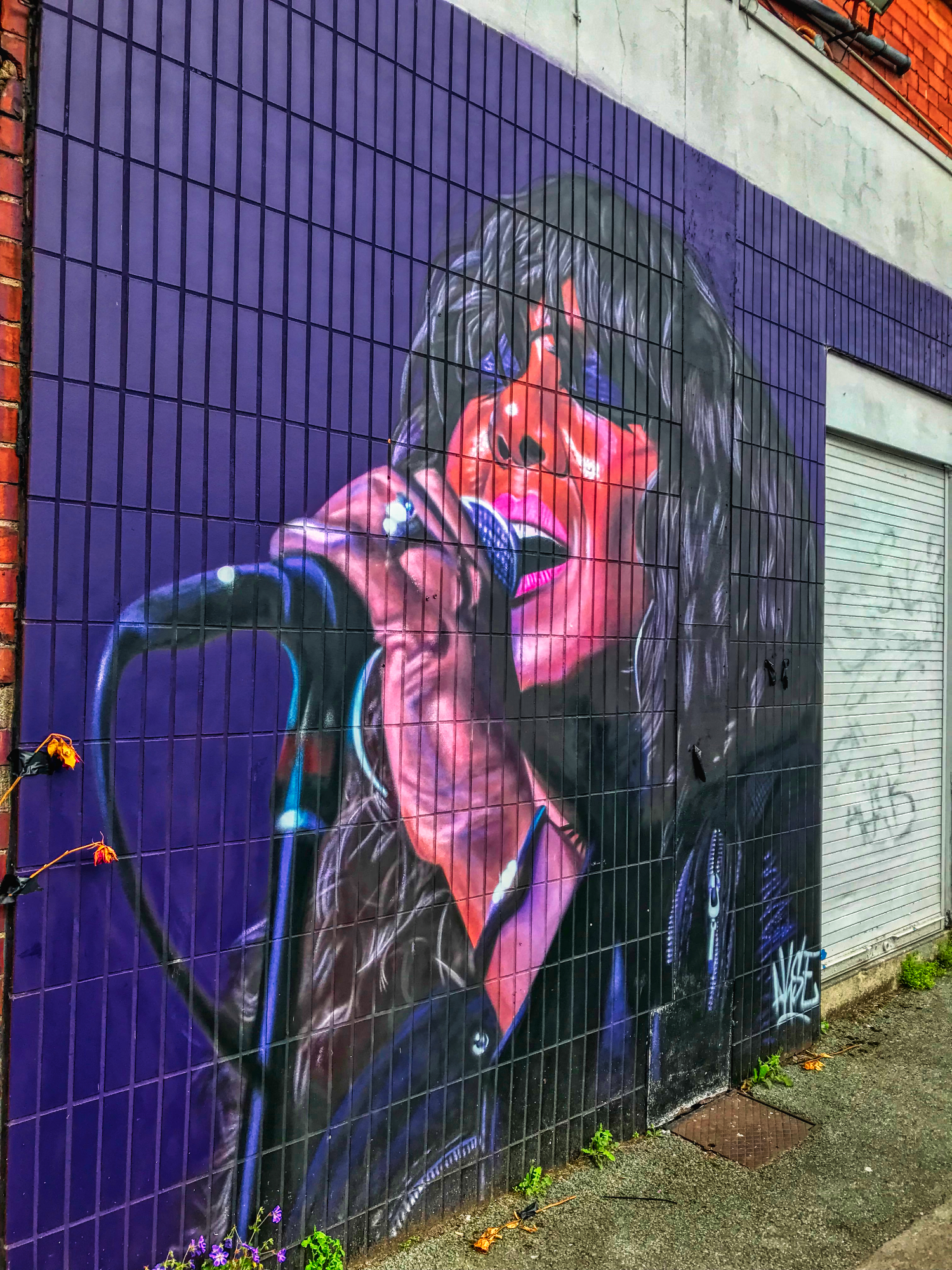 More and more boards have been stuck on the outside of Hulme Hippodrome in an attempt to keep the likes of us out. 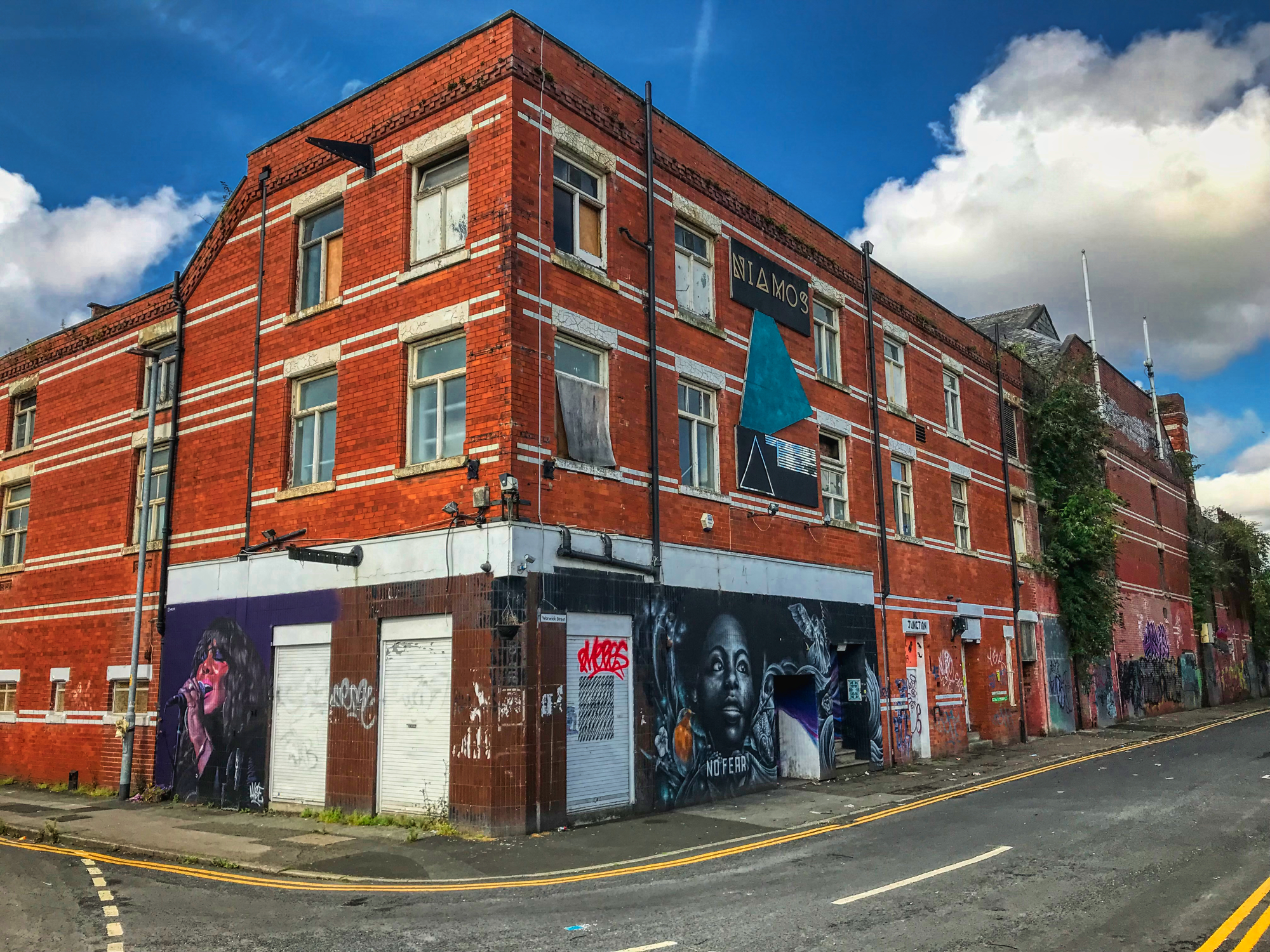 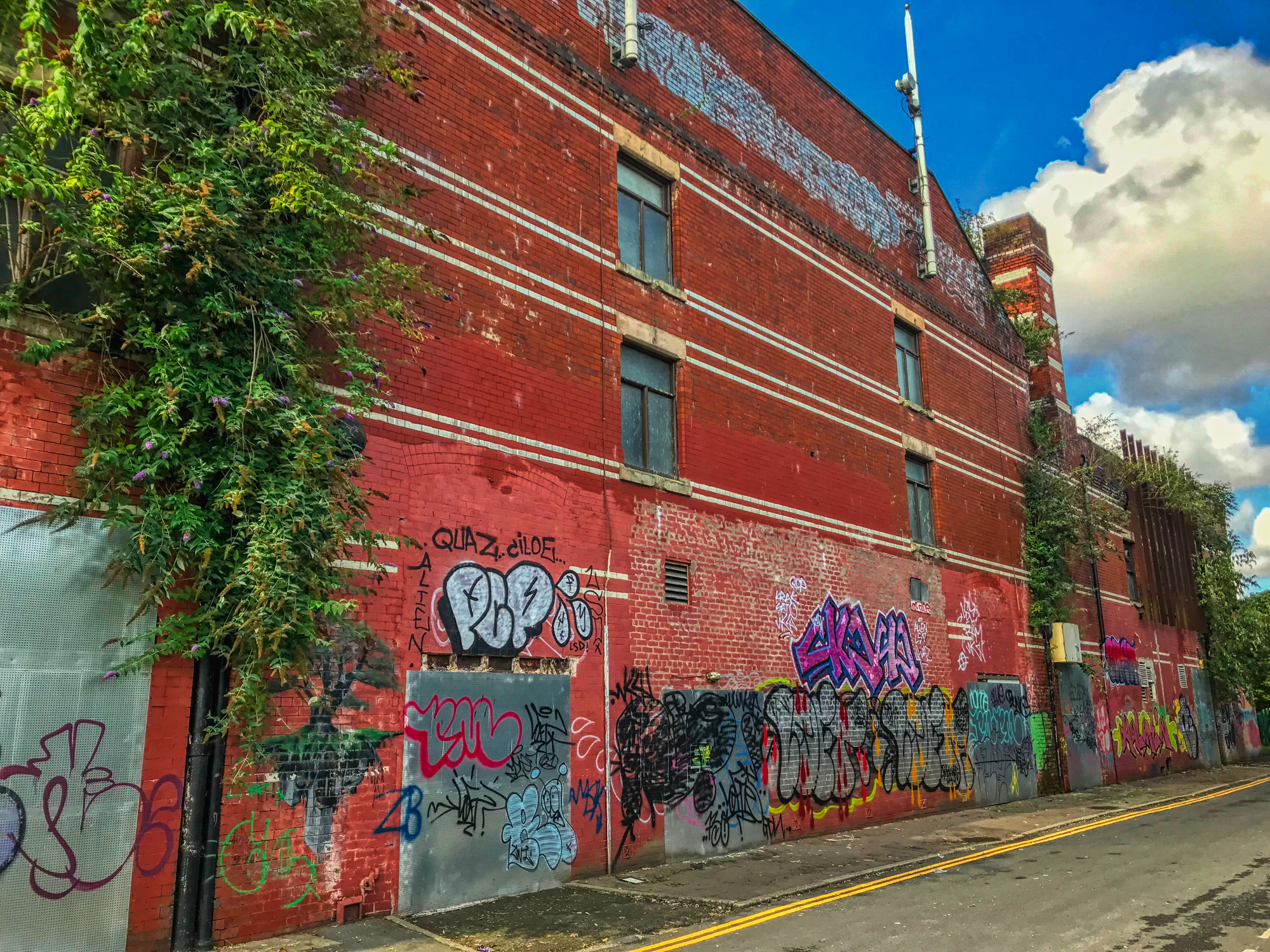 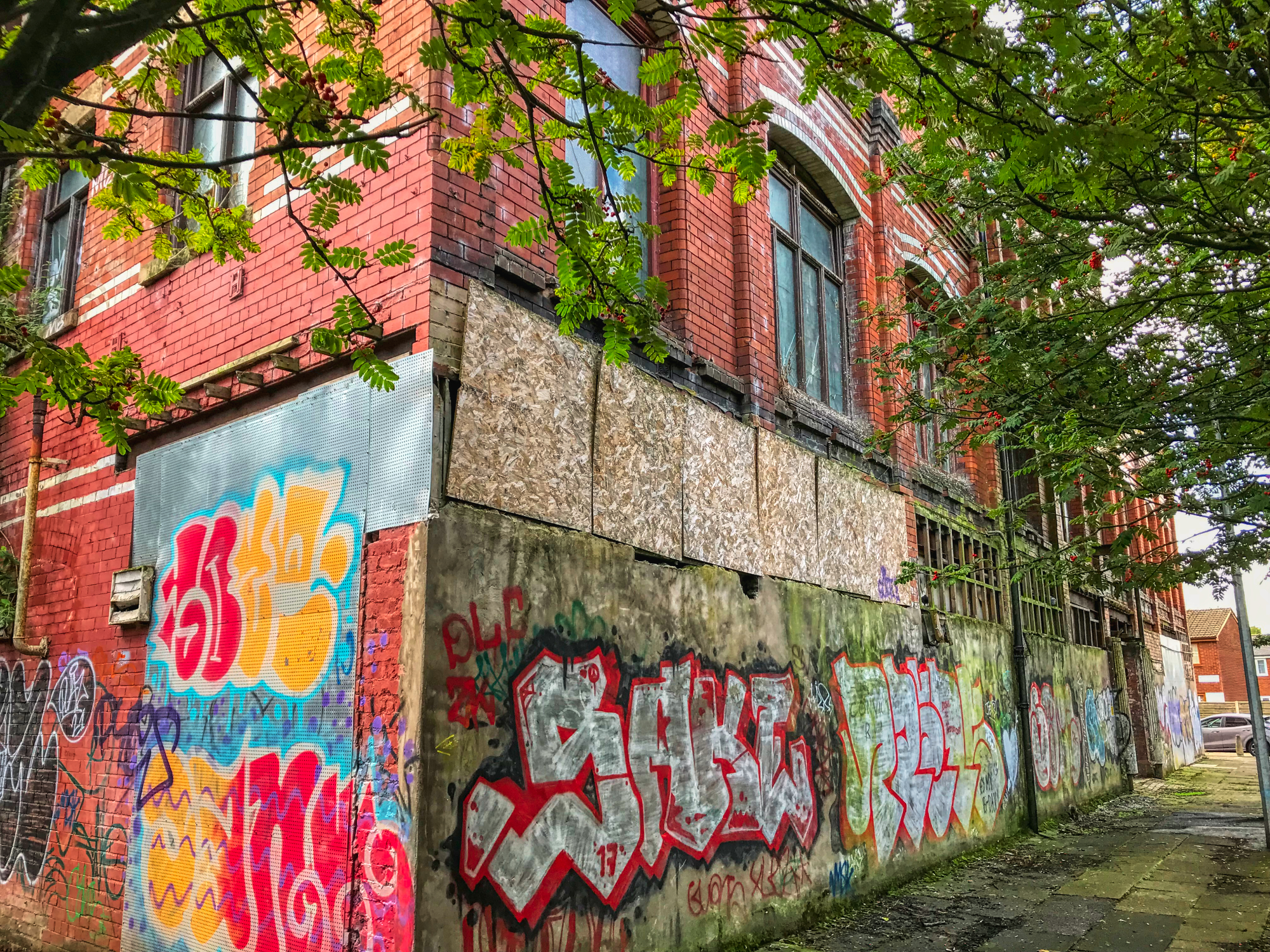 We did get some strange looks from the locals as we photographed this ancient structure. Whatever.. my endless bad luck with theatres and cinemas continues.

No way in hell this was going to be a fail. I had seen another recent report and there appeared to be little left beside crumbling walls. 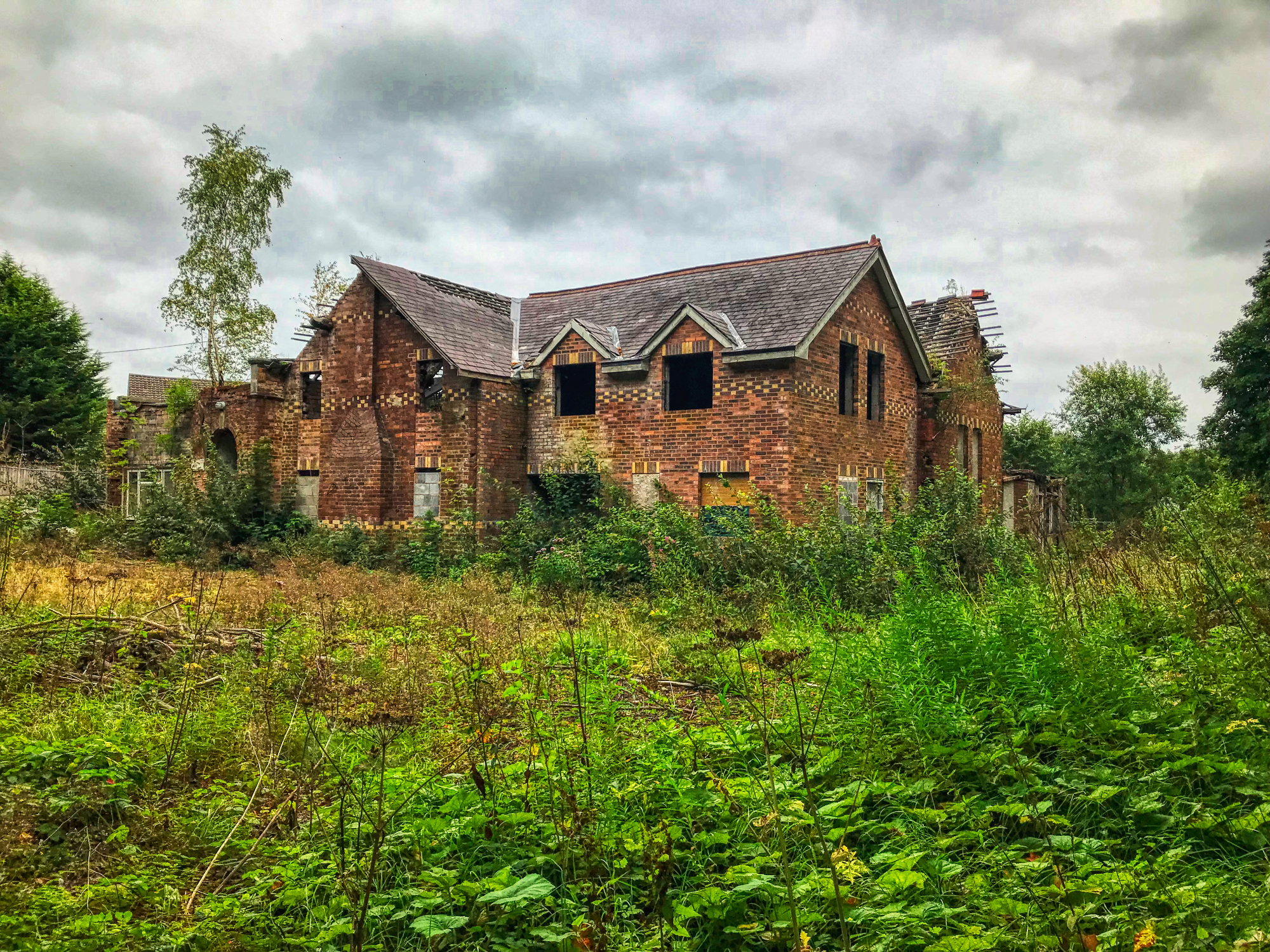 Fucking builders, they should be at home with their families or at the least getting pissed at the pub. This twat was working on a Saturday of all times. 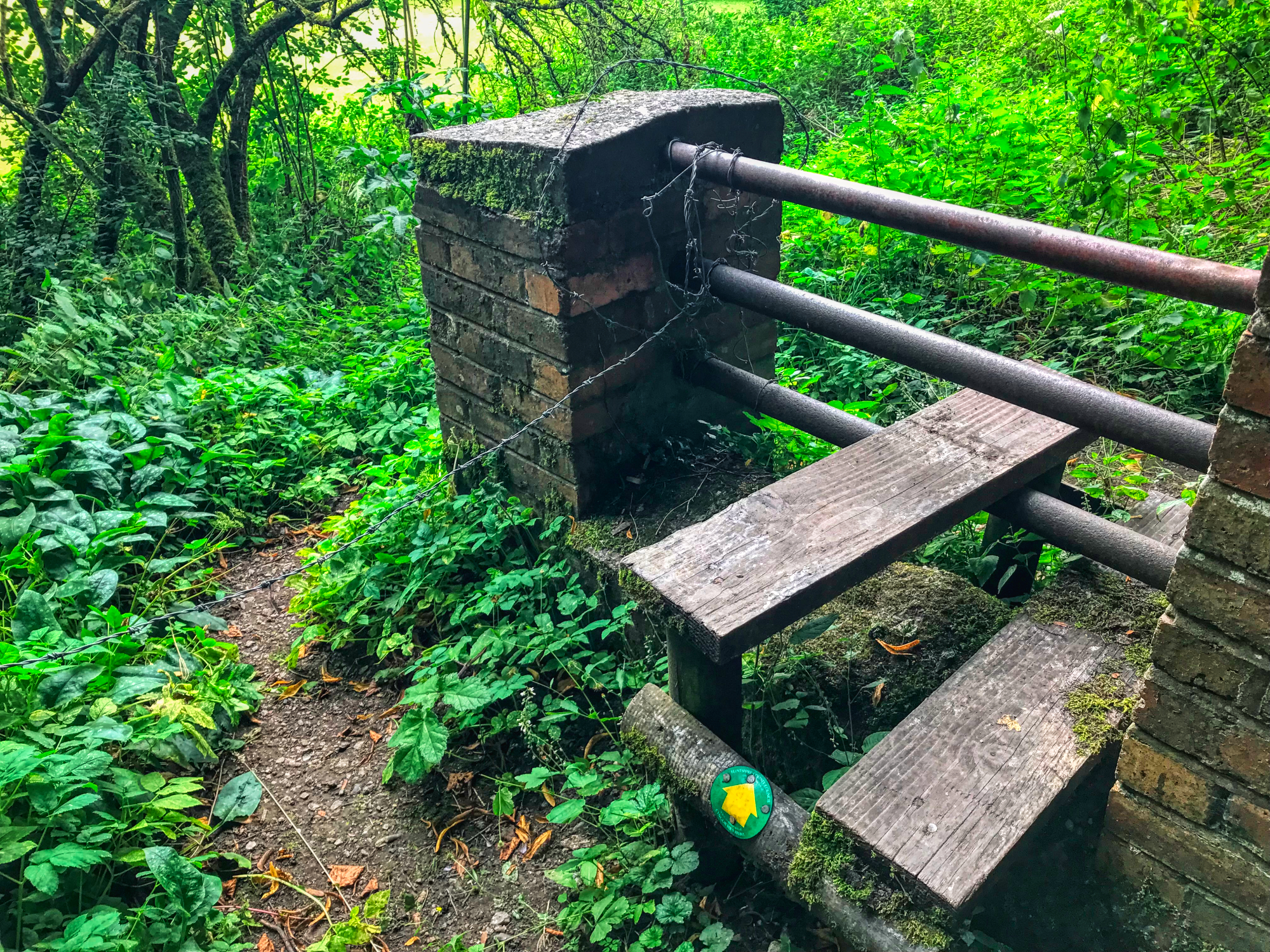 We sneaked in, as usual, me noting the stile, the barbed wire, and the fact that you can jump the stile making the wire completely inconsequential. I do love shit such as this! That roof and brickwork looks a little too good; it’s supposed to be wrecked and full of holes. We conceded that it was another damn refurbishment job. 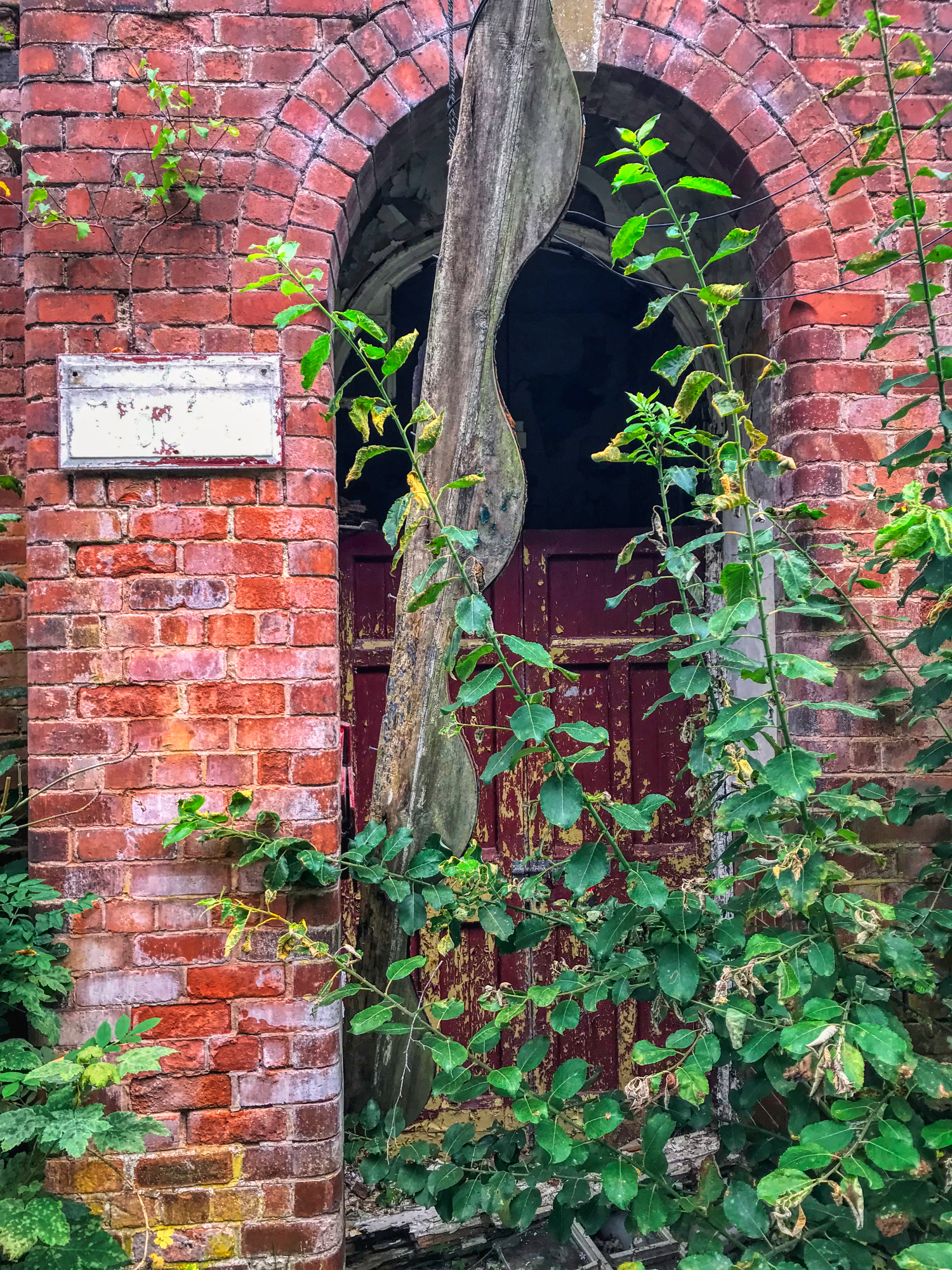 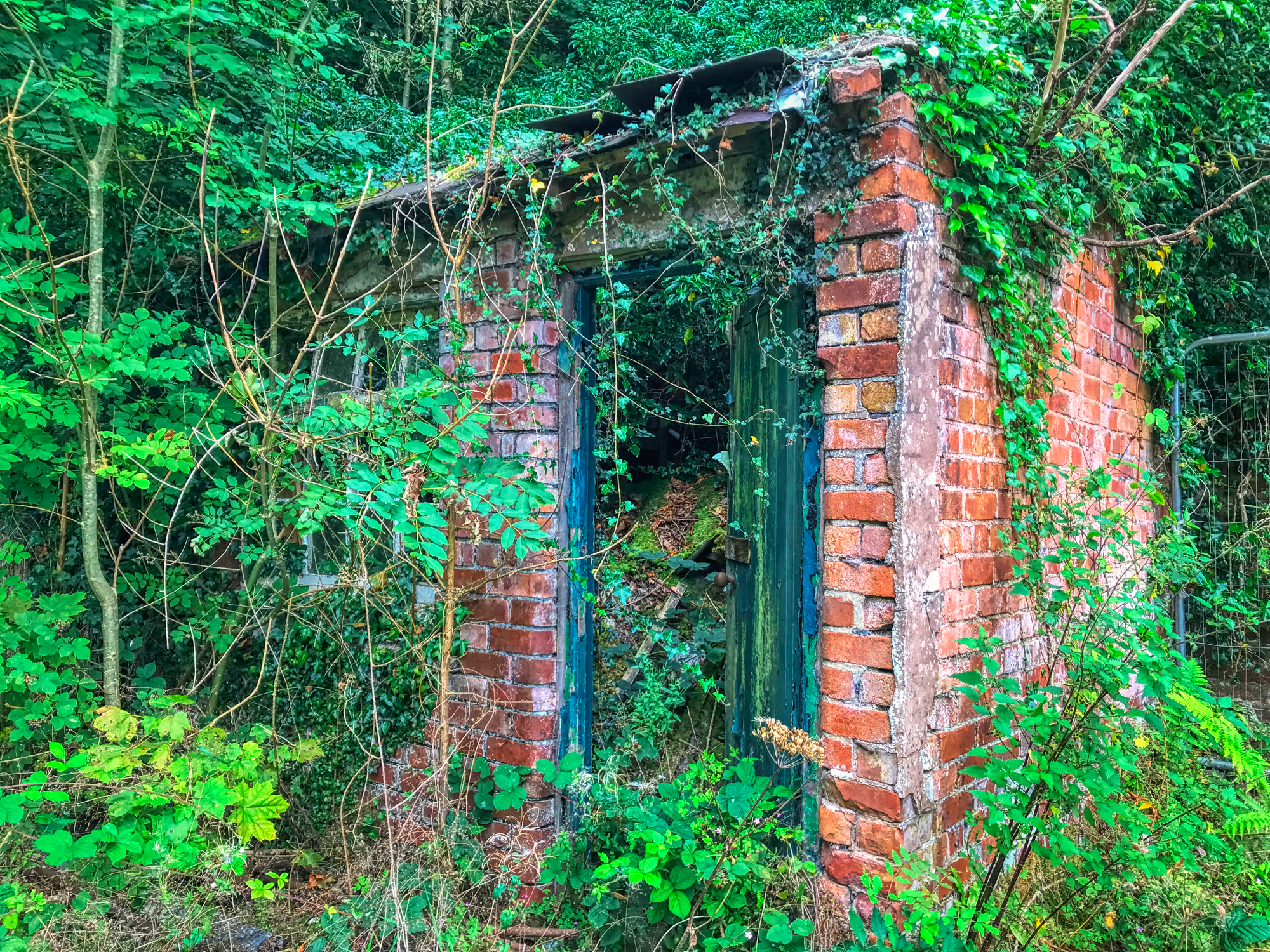 Creeping alongside the building we heard banging and hammering sounds confirming our suspicions. Noticing a set of ladders that were not of the 'abandoned type' took this one off the radar.

“You might be able to still get in that”, explained @grindle. He had done it, but it had been a couple of years ago. 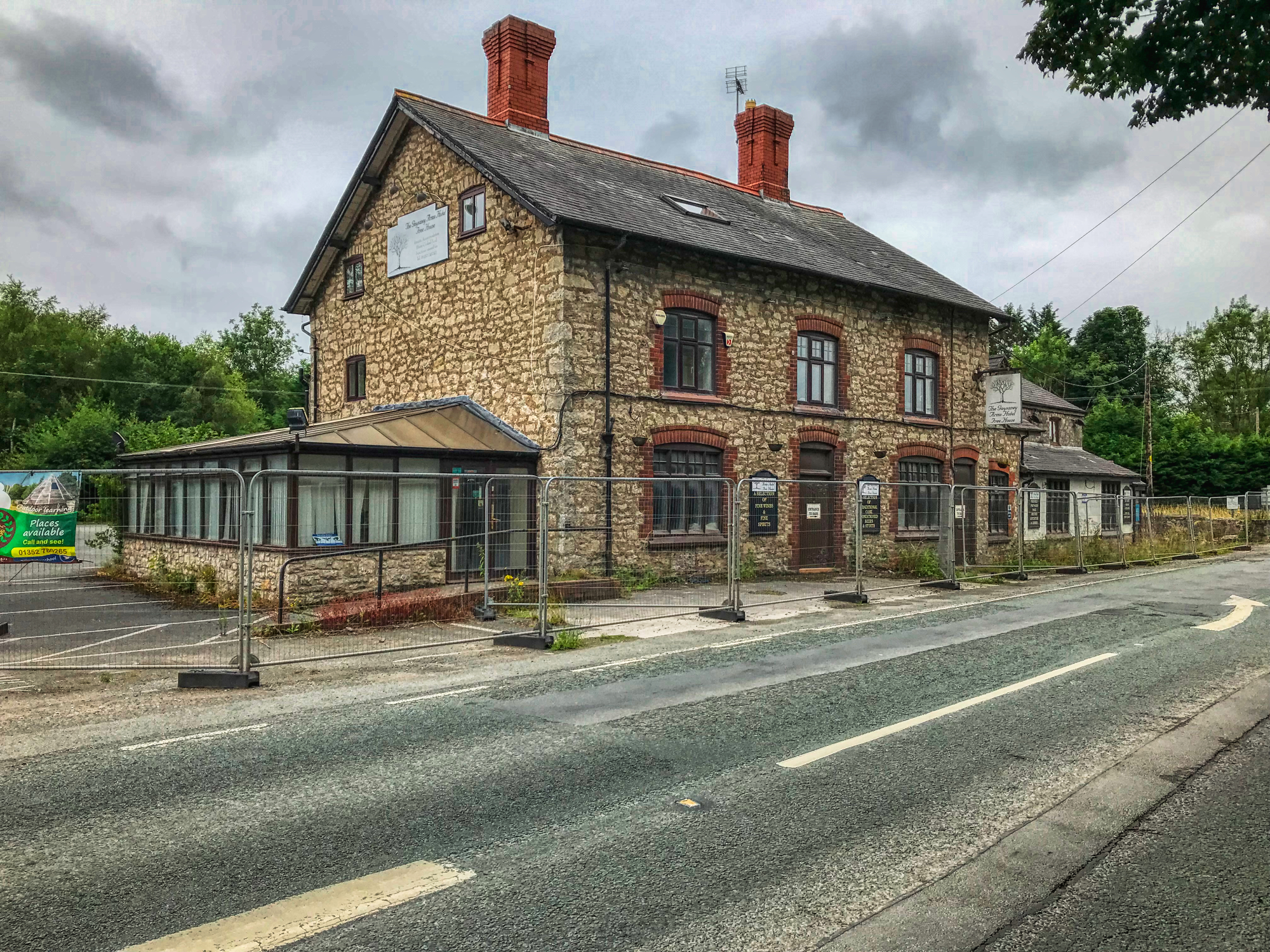 On arrival, we pulled some faces. This looked ready to re-open, and not the creepy haunting old hulk we were expecting. 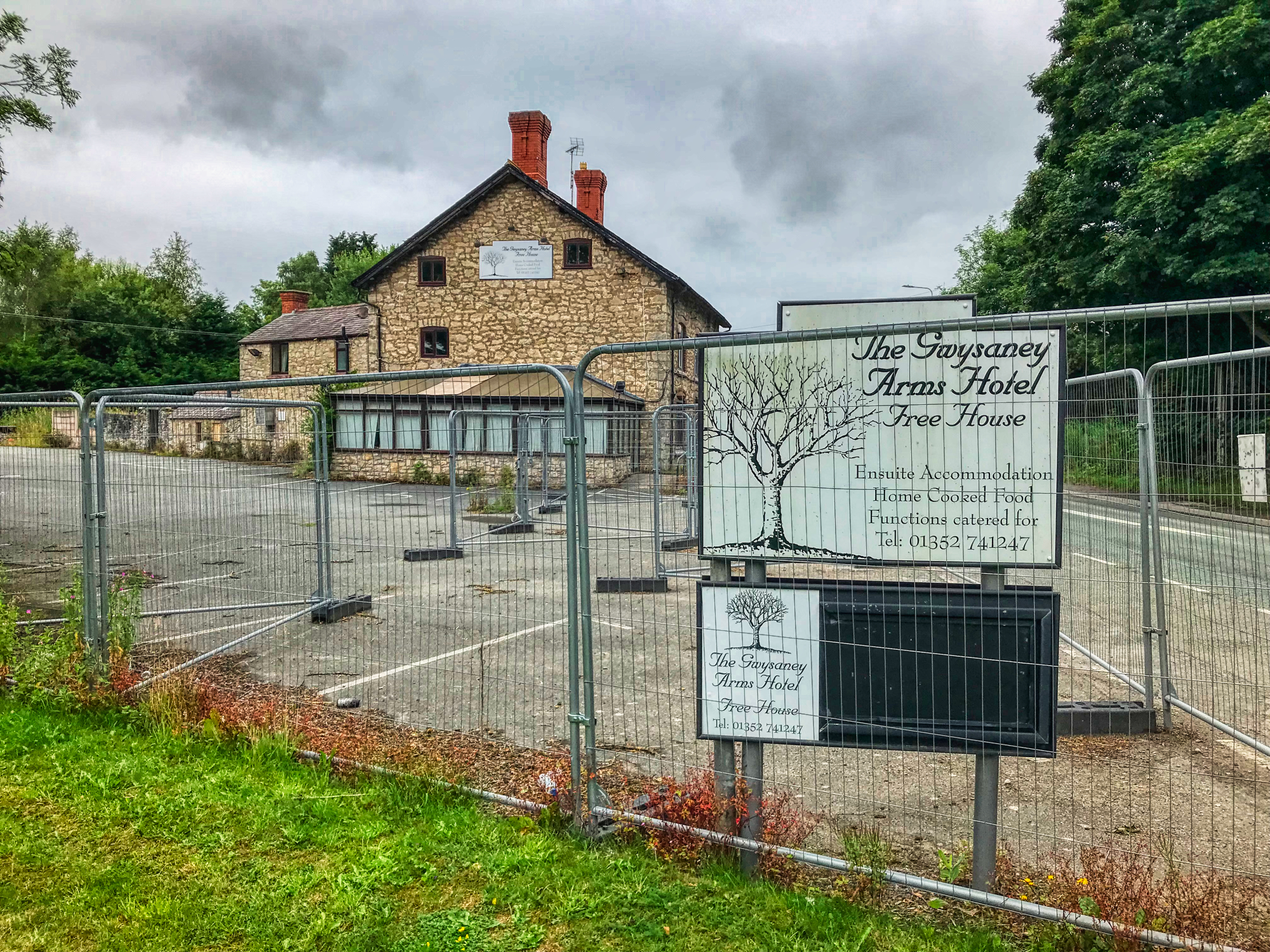 The herras fencing was far too new and had been refurbished recently. Even the edges were impenetrable, historically nearly always the weak point. 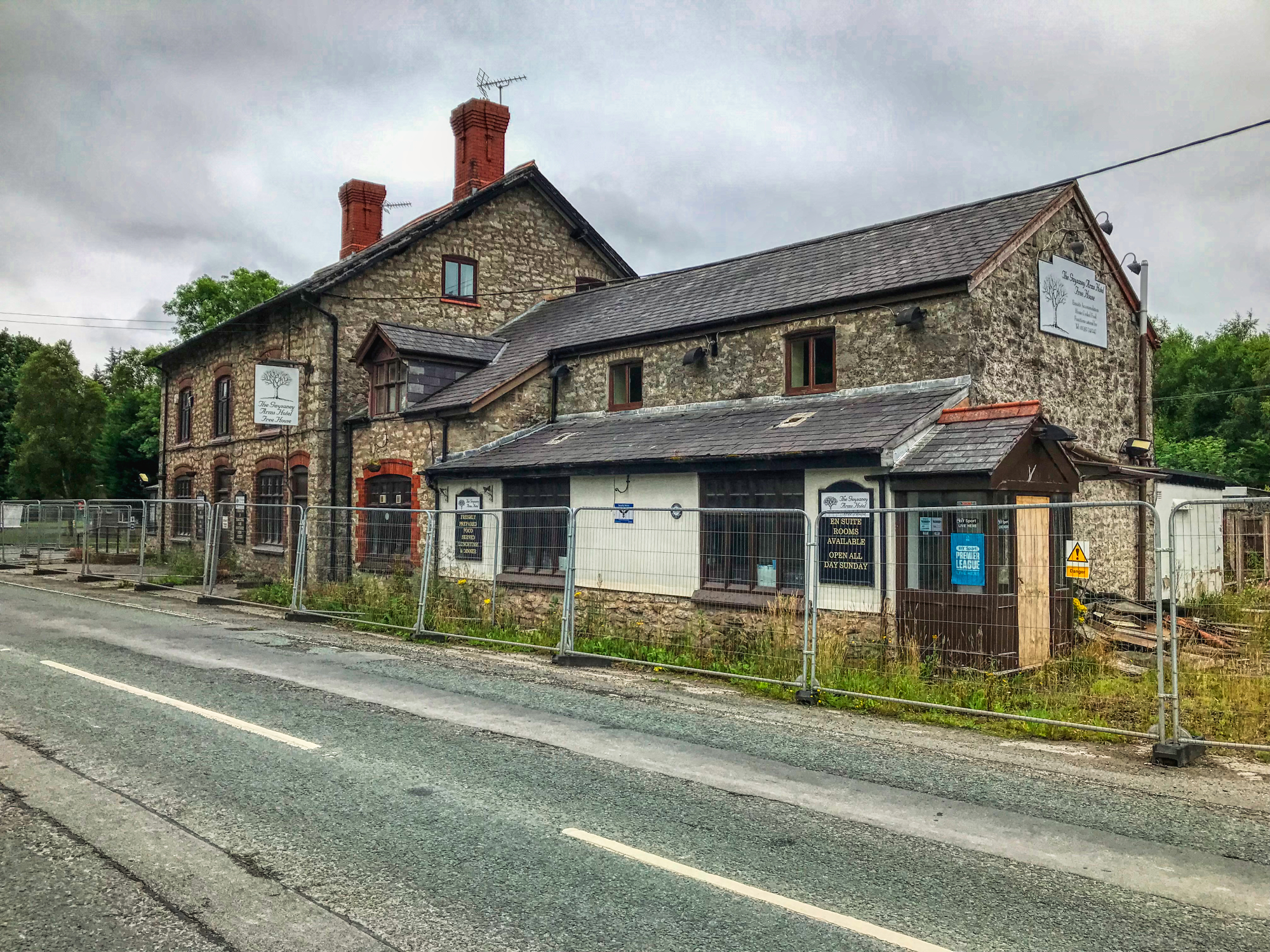 Add a very busy road in the mix and things were looking decidedly gloomy. Just getting in the grounds was going to be a case of vaulting over this and hoping the crumbling wall far side would not disintegrate. 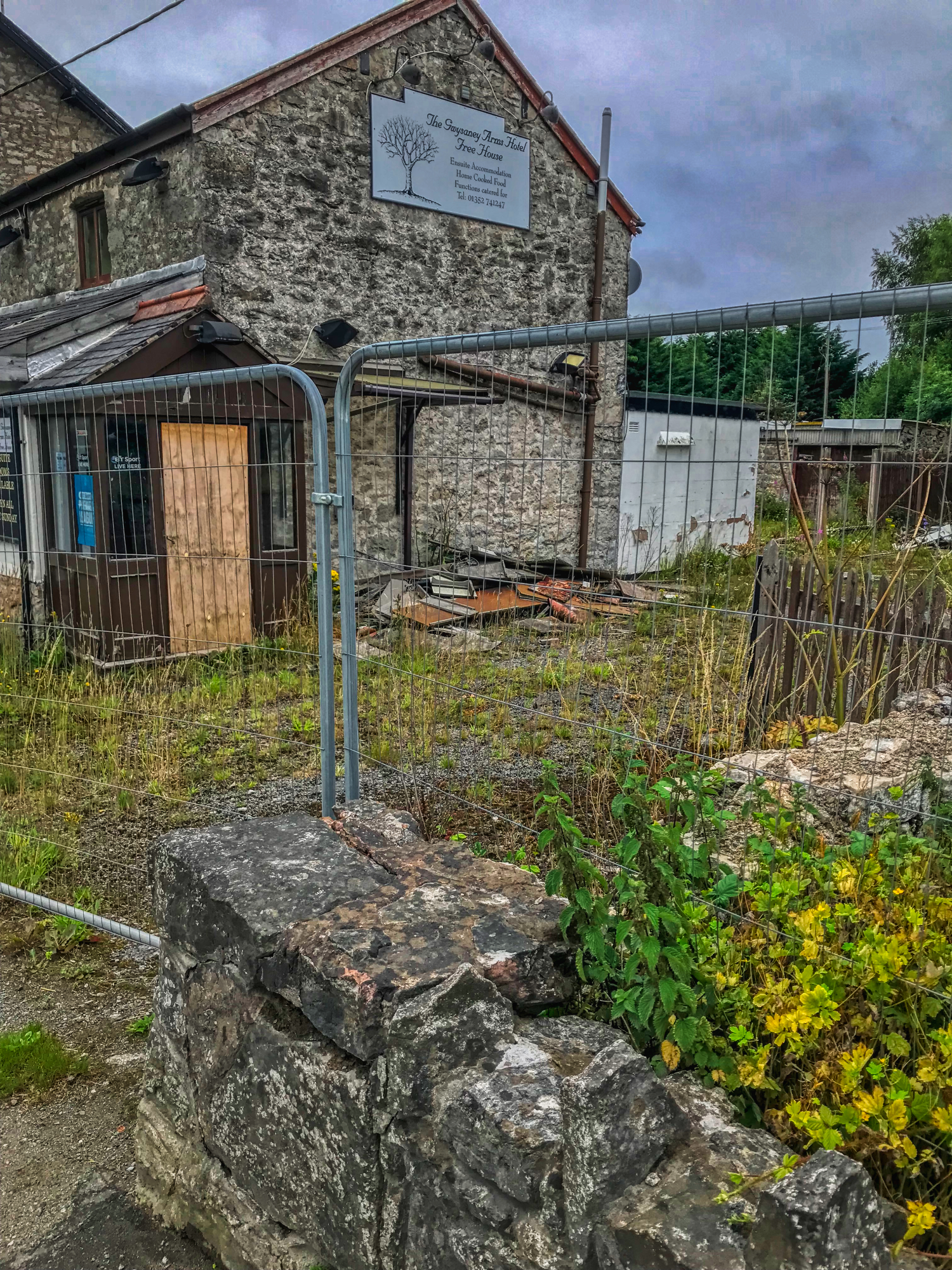 @anidiotexplores contemplated the jump and thought better of it. It did not feel right and looked too much like ‘under renovation’ for our tastes. 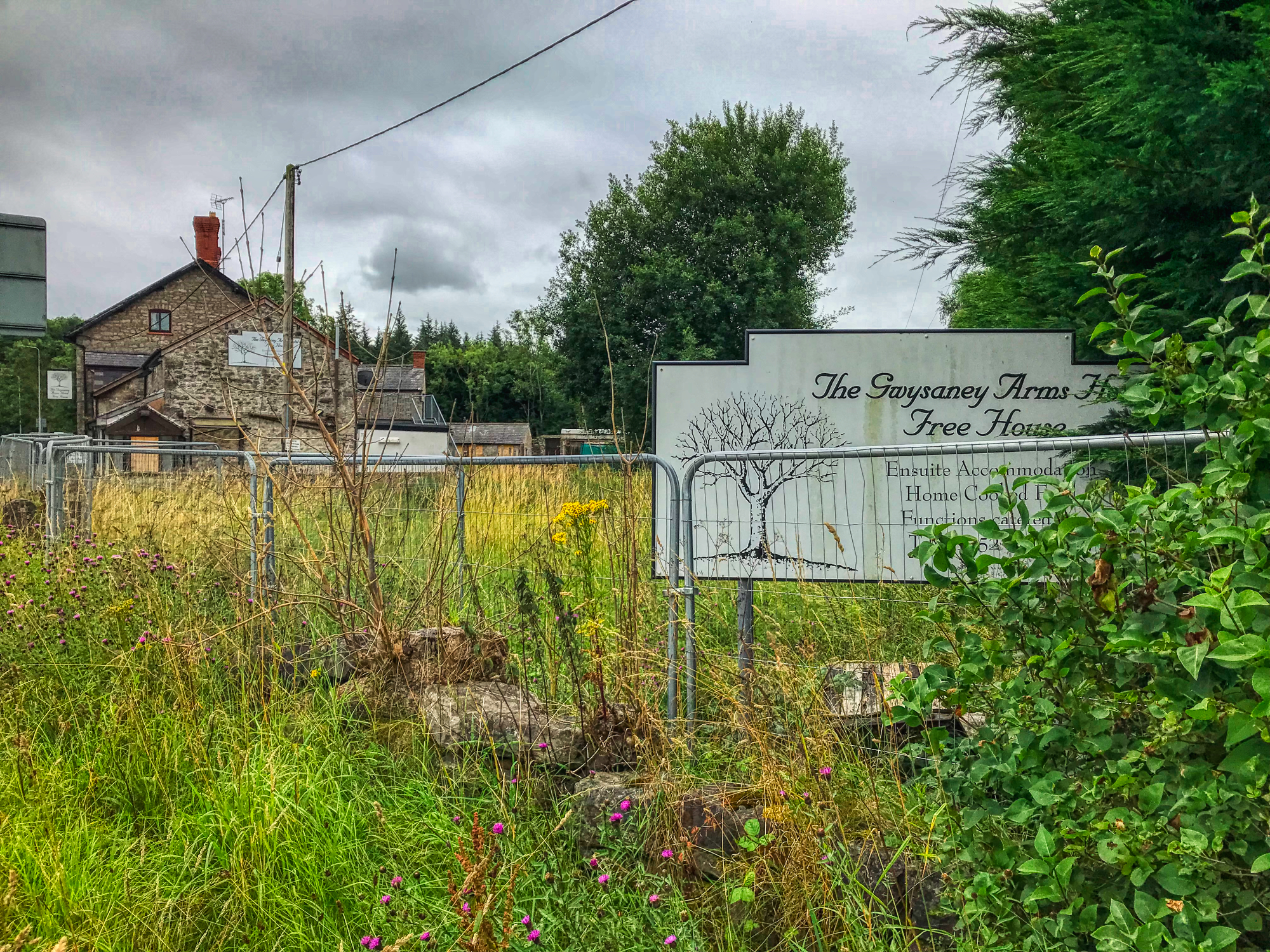 A possible missed opportunity but I don’t like invading properties that are under renovation. That is NOT abandoned in my book. Fucking renovations!

@indiaunited
about 1 year ago

This post has been manually curated by @steemflow from Indiaunited community. Join us on our Discord Server.

Do you know that you can earn a passive income by delegating to @indiaunited. We share 80 % of the curation rewards with the delegators.

@meesterboom
about 1 year ago (Edited)

Cool graffiti on the hippodrome boarding though!

It seems to me that this is a fictional profession... well, or the name is fundamentally wrong. They don't build, but break what has already been built (it does not matter by whom, by elves, maybe). As a result, their work boils down to what they are trying to fix, what other builders have broken.

It didn't fit the pattern, still there was a nice industrial derp right next to it. Should have been a double bill and we lost out on one.

A double would have been nice. At least it wasn't an entire waste then!

Ideal Header: "Not To Be..." both pubs look grand, hope they do open one day again to eat, drink and sleep!

School houses, now education is done, school is out why would you revisit, no old ma'am left to scold naughty boys not invited to explore.

Oh did enjoy the drive around rekindling old haunts, some not so old @slobberchops

!BEER for booby prize in trying 😆

Yes, I too hope they both open up again.. not that I will be visiting as they are 70 miles away from where I live. Thus.. is the shortage of local places, we are having to travel further away.

Distance not a problem if they open to enjoy, or perhaps future exploration trip with access who knows the way things are going of late....

Fuuuuck. A bit of a disappointing post, as the topic suggests. However, I couldn't contain my feelings at The Downing Arms. It looks very appetizing from the outside :(

I would try hard to get inside the old Victorian theatre, the colour of which looks amazing.

Victoria Theatre looked very similar and I missed getting inside earlier this year. The Hippo, not a chance!

How dare you not get inside The Downing Arms or the Primary school. I feel cheated somehow.
Get your coat on, young man, go back and do your job! 😜

That school pissed me off. Damn builders should arrive as we are leaving!

In one post, you seem sad to see these old derelicts left to crumble, yet in the next, you're angry at active renovators. I DEMAND CONSISTENCY!

Heh.., it all depends. Someone posted the school quite recently and it looked like a wreck. Then all of a sudden when we arrive it has been miraculously transformed. Being far away is annoying when what you see is not what you expect.

I am glad you led with this, I had visions in my head. :) Still, I was so disappointed that you went all that way for a bunch of renos... I am glad they are doing that, but, geez, can they not pass it through the Urbex World first? Don't they know everyone wants a look-see?

It is tough when you have to start putting on the miles to find anything, but, you cover so much territory in one day, I am surprised there is anything left. More than your skills to vault over the barbed wire is the way that you describe it. :)

Never lose that ability. That is 3/4 of the fun.

You really got around! The theatre was pretty cool with the street art/graffiti all over. Where was Karen then??

Karens are everywhere!, it helps little that we always looks like suspicious buggers looking for a break-in (thats what they always think). Fails are part of it all, I try and take as much as I can get even if we can't get in places.

@cccf
about 1 year ago
Congratulations! You've been awarded upvote from
The Creative Coin Fund

Sorry for giving you fails!!!!!!
the hippo has some lovely art on it now, I have wandered many times the outside but its beaten me every time! ( had the same issues with Trafford hospital, have you tried that recently?).

I need to know more about the penguin man, ya buddy hadn't been on the waccy baccy by any chance? the place is crammed with stuff, maybe he saw a shadow or something?

LOL, don't be daft.., what I would like to know is.. the pub (not the Downing), did it look like that during you visit? As we dint take it any further there's always that nagging thought that it could have been open around the back?

Trafford is sealed and has secca I have been told. @anidiotexplores has tried and a 7ft security dude got him.

He does smoke the waccy but has gotten so accustomed to it that its quite normal for him now. I didn't personally see penguin-man, that was his description. As penguins don't run fast, we got away!

the pub/hotel, had no fencing and the entrance........... through the kitchen window round the back !!!! otherwise externally it looks the same. As does the other pub, everything inside still in its place, I thought I was going to get in through the door up the stairs, it was not 100% secure, but wedged with a big chunk of wood that just wouldn't rattle loose!!!!!

It looks very much like a reno job, I keep clear of those but occasionally stumble inside the odd one.

Hey, I am just glad to see you didn't end up the derp basement sex slave of the hermit Penguin.

I like those murals! They would look great on any building...

It's a shame you didn't get pictures of the penguin guy! Did he have webbed feet and sharp teeth in a beak?