Fails of the Urban Explorer: A Quartet of Failures XIII

The fails have been piling up again especially in the Manchester area. After discussing with @anidiotexplores about vetoing the city, we ended up there yet again last week.

Whether it’s the convenience of explores on our doorstep, the sheer number of decaying relics in the nearby city or downright apathy I can’t explain. 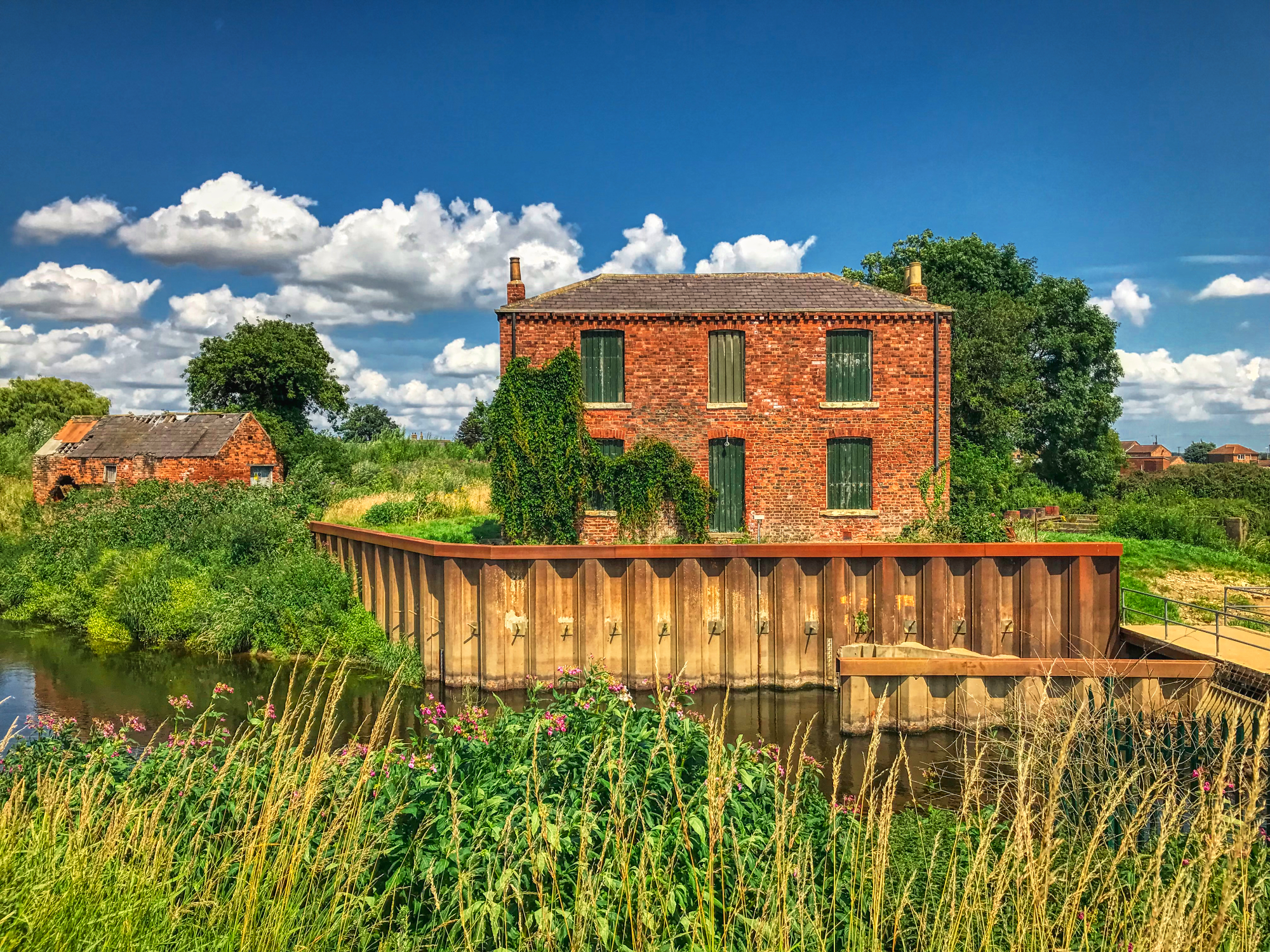 In the next few weeks we will be going to more remote locations again and screw Manchester at least for a while. Ironically, none of the below are from Manchester; those will be for another day.

So close and yet so far away. The Old Lock house stood on some kind of artificial island surrounded by fast-flowing water. 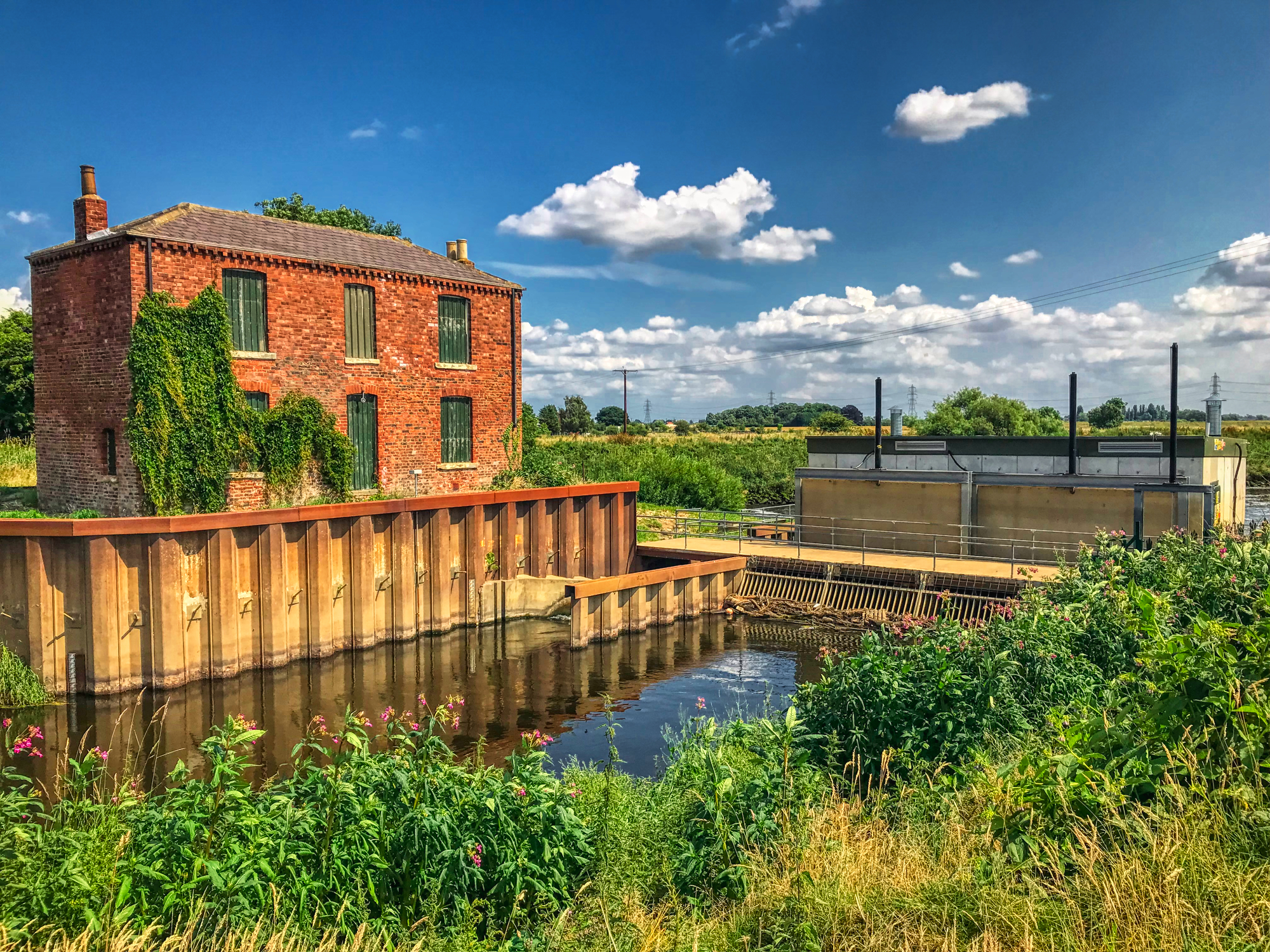 It was a hot day, tropical in fact and both myself and @goblinknackers were questioning whether we should be exploring in this 30C heat. 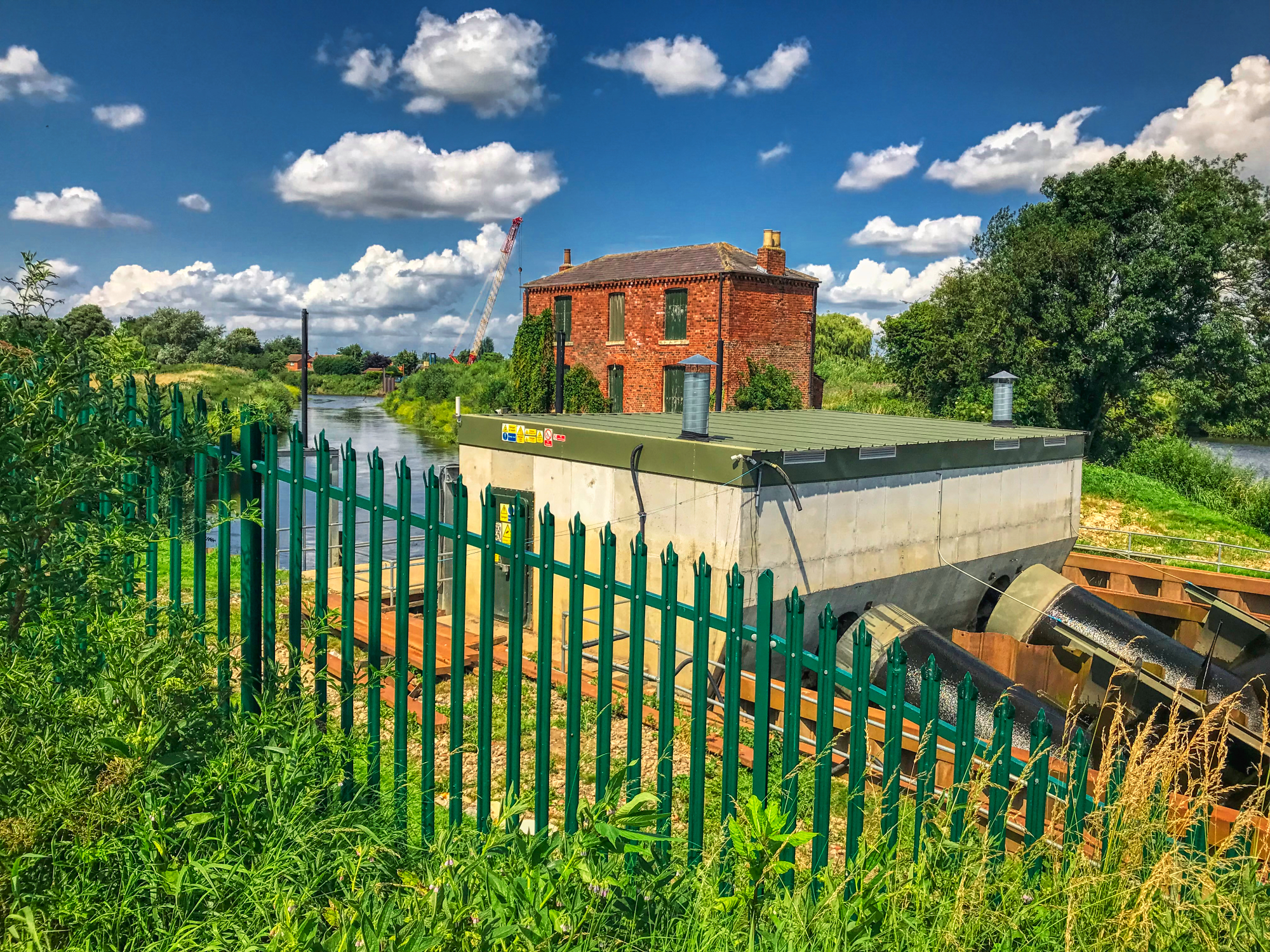 After a walk of 500 yards or so, we saw the target behind freshly grown Pallaside fencing designed to terminate your option to have children if crossed. 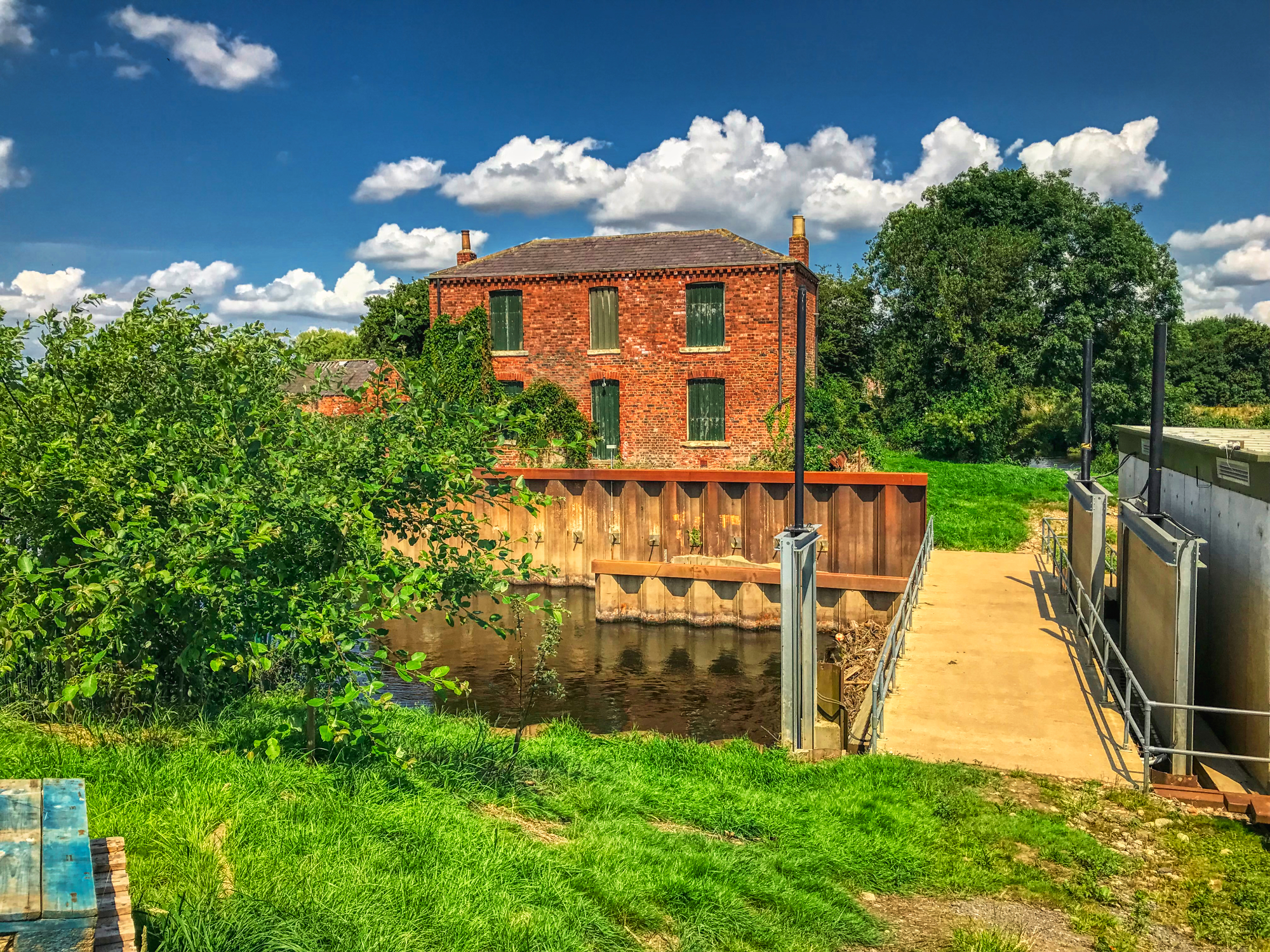 I felt my balls and though I don’t want any more kids felt a little protective of them. No sharp edges today thanks and it looks like there may be CCTV in there.

This is the way for the more adventurous types and @goblinknackers surprisingly was up for it. Staddle around the edge of those sharp green spiky things and hope the fencing does not give way. 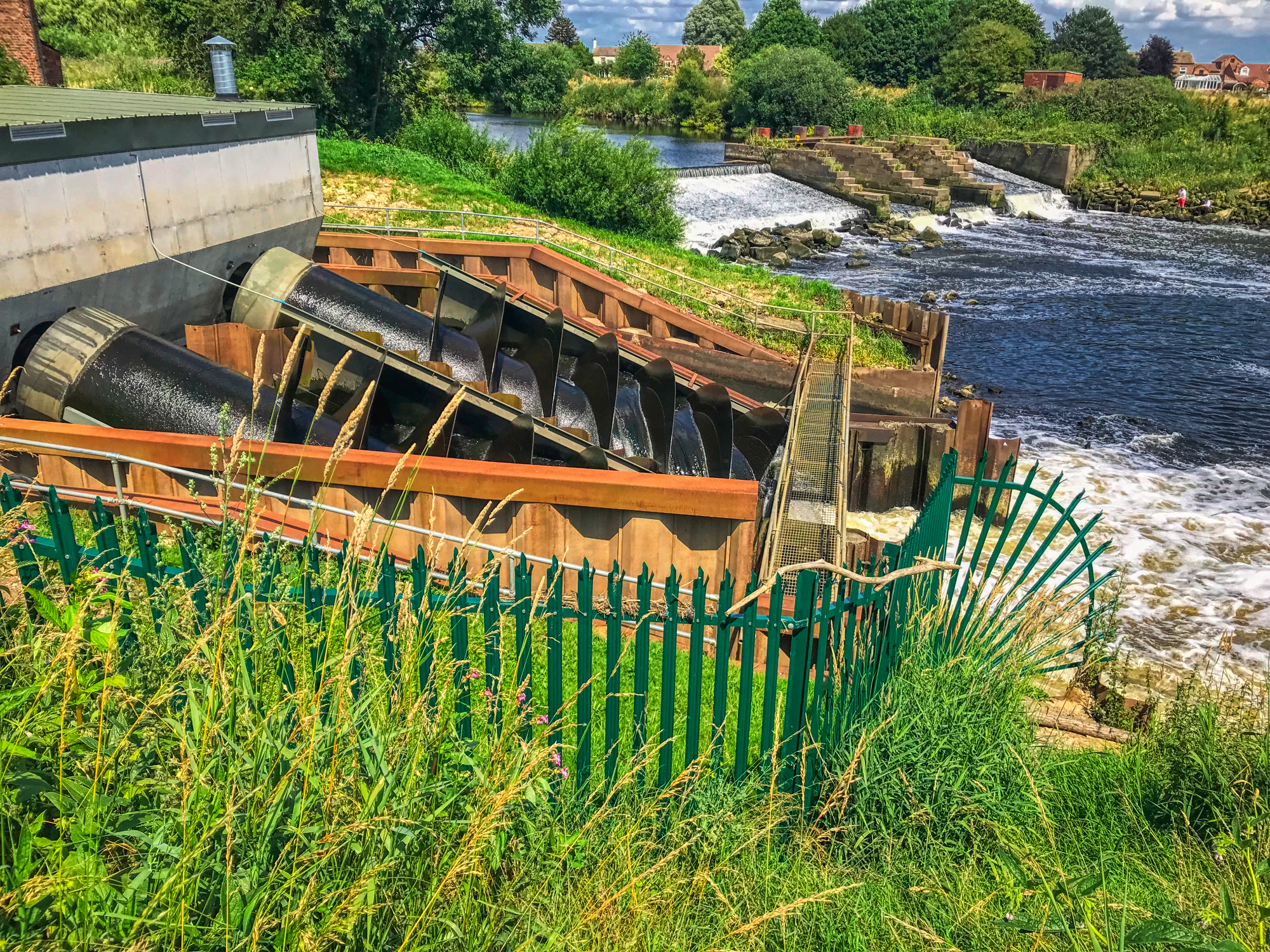 Maybe he’s a good swimmer. It was too dodgy for me and so we made the democratic decision to move on.

I should have asked @grindle about this one to save the embarrassment. Plas Teg is a very impressive manor house in Wales and I didn't even get a full shot of it. 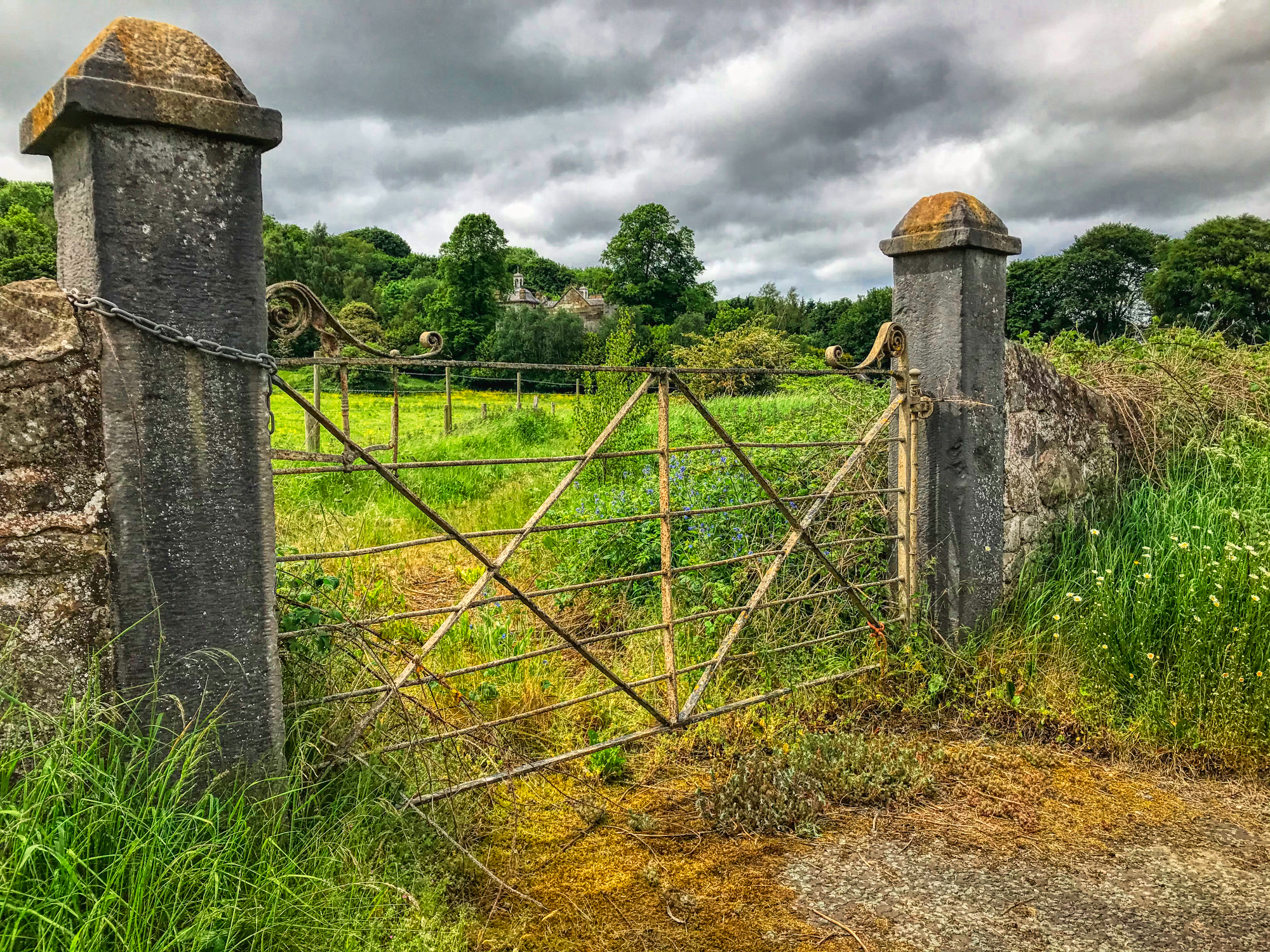 It is also inhabited though we didn't know at the time. A trudge across a large field full of stinging nettles brought us to the edge of the grounds. 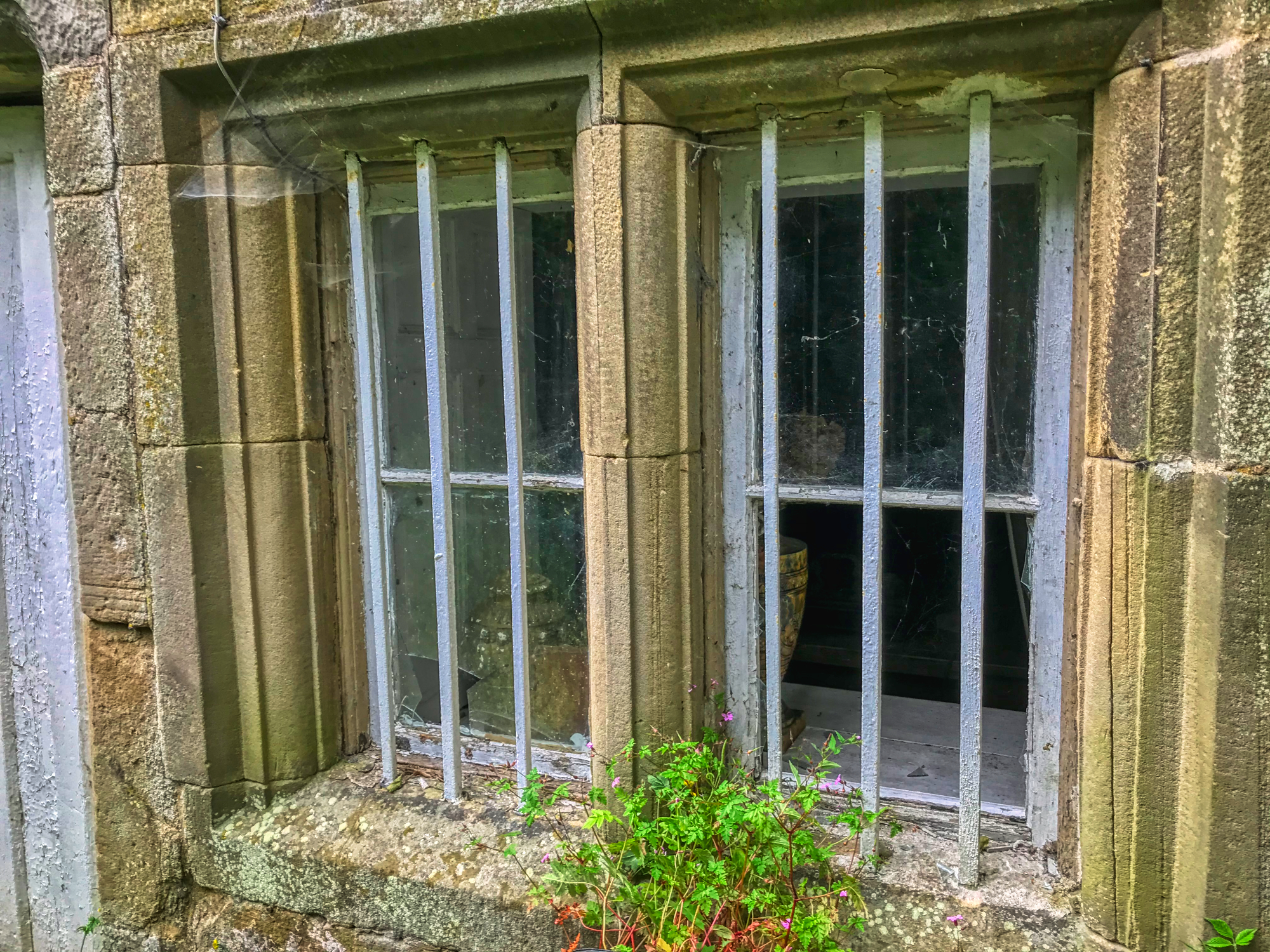 Broken glass says to me we could be in business. 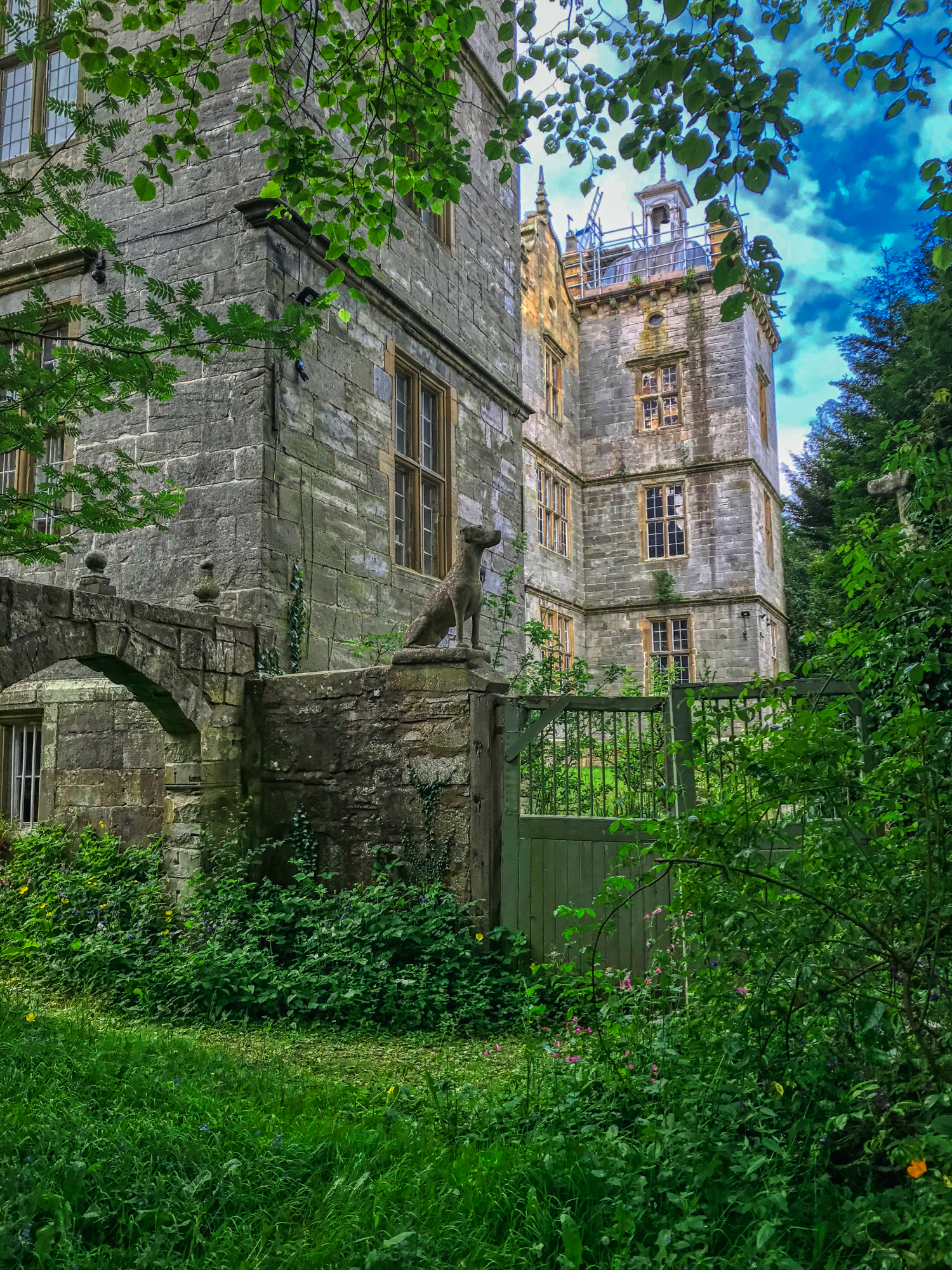 Looking a little further through these royal-looking gates revealed an open door but I was getting a bad feeling by this time. 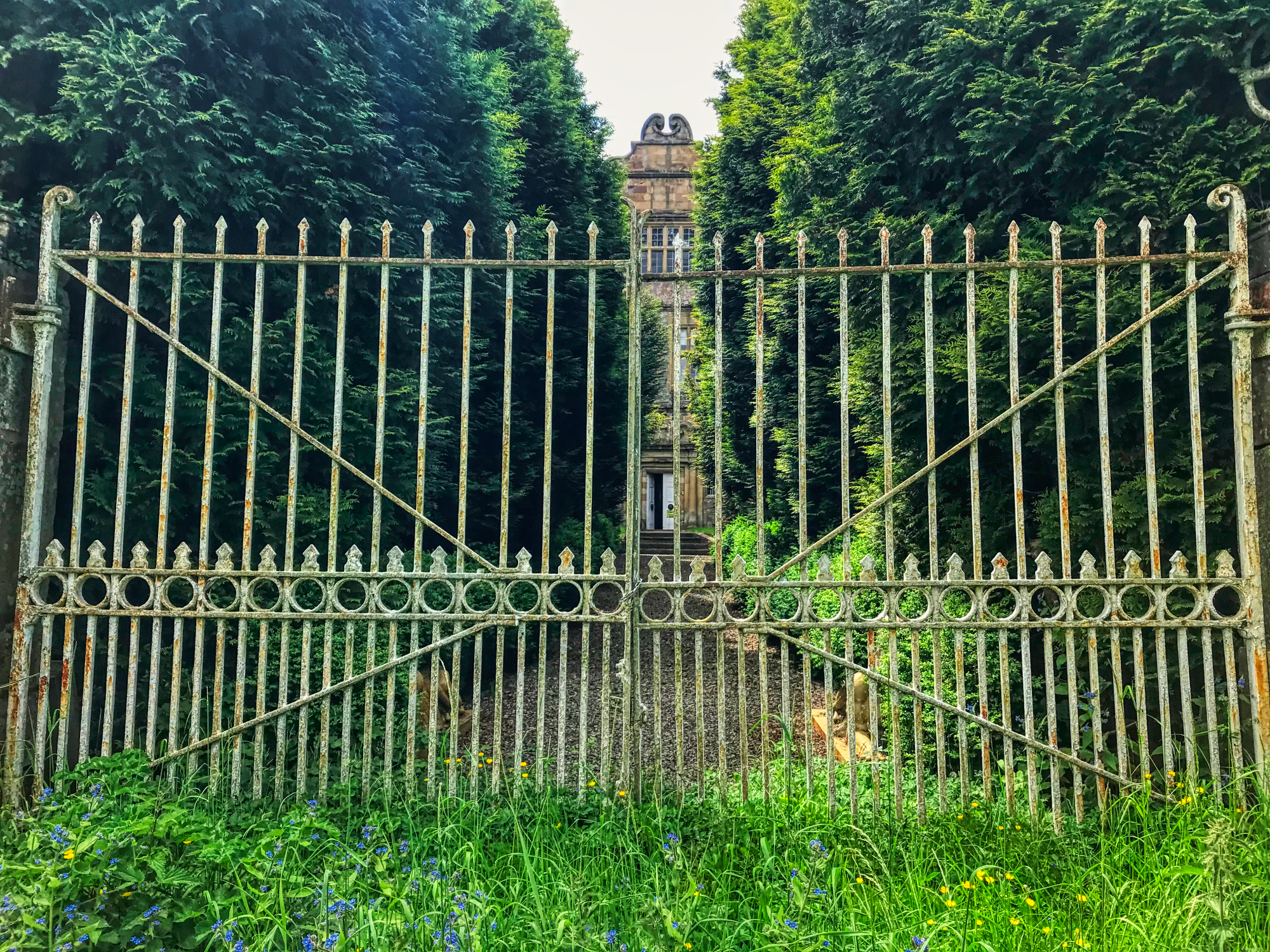 A little old lady stepped out and waved from afar. What was going on? Was it my sculpted honed urbex body she was slavering over or it could have been a ruse to get us inside the gates before unleashing a horde of rottweilers on us.

It was all too surreal for me and we both picked up our tails and scarpered quickly.

After witnessing @anidiotexplores badly scrape his leg on some barbed wire getting into the grounds of The Elms, the least it could have done was let us in as a form of compensation. 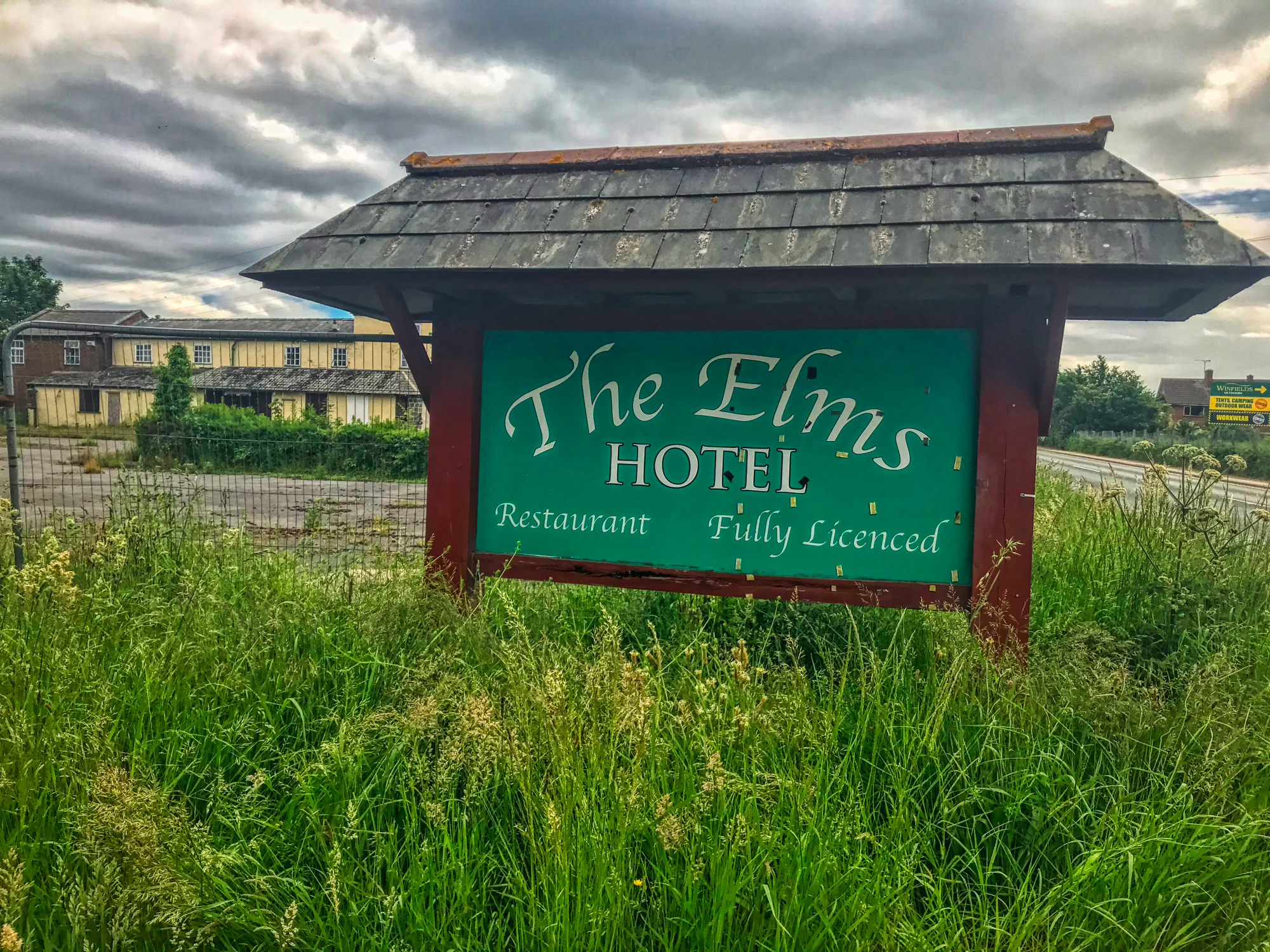 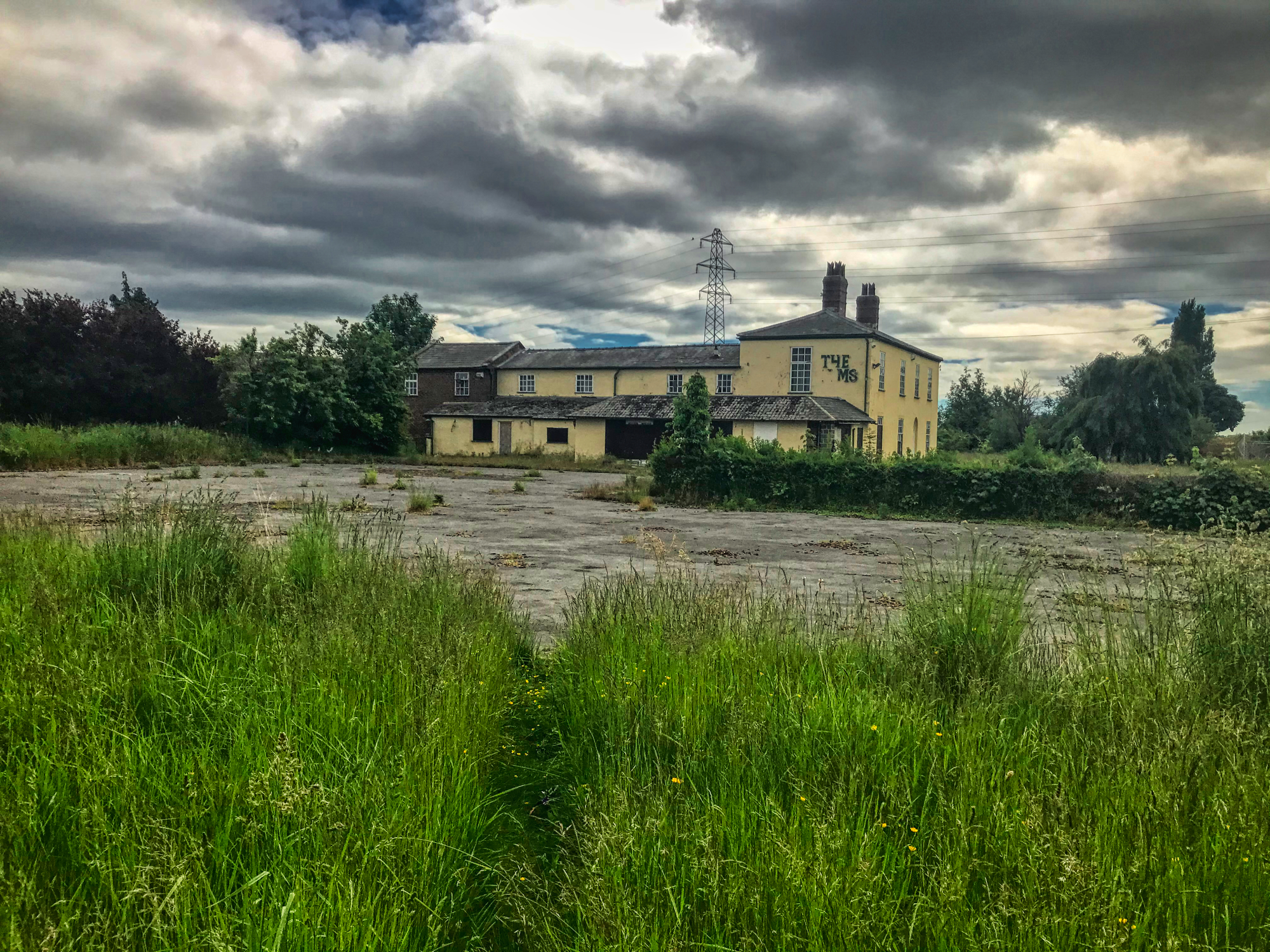 It was not to be, the sealers had recently visited and done stellar work. Unless you want to climb up on the roof it was off the agenda. 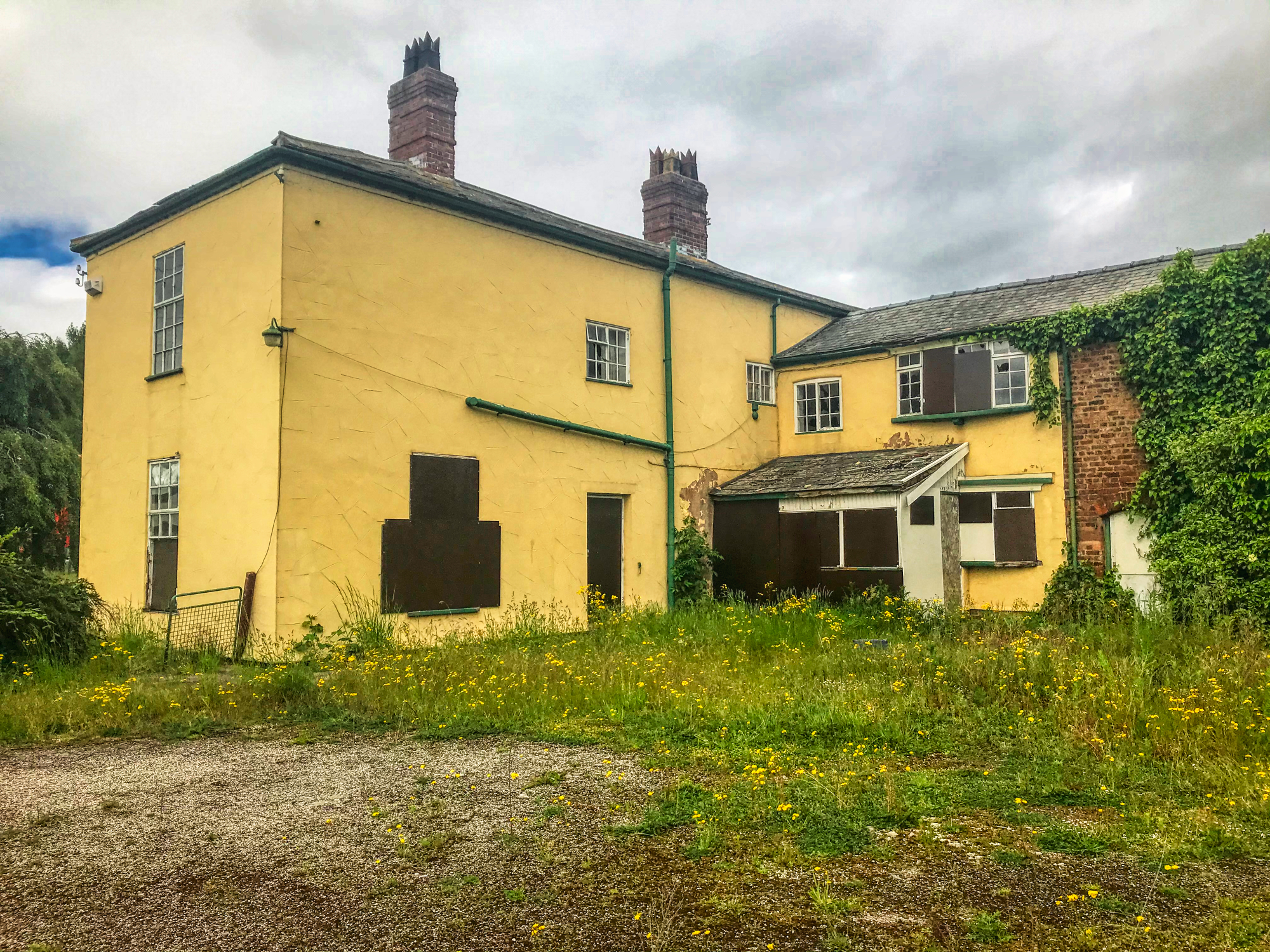 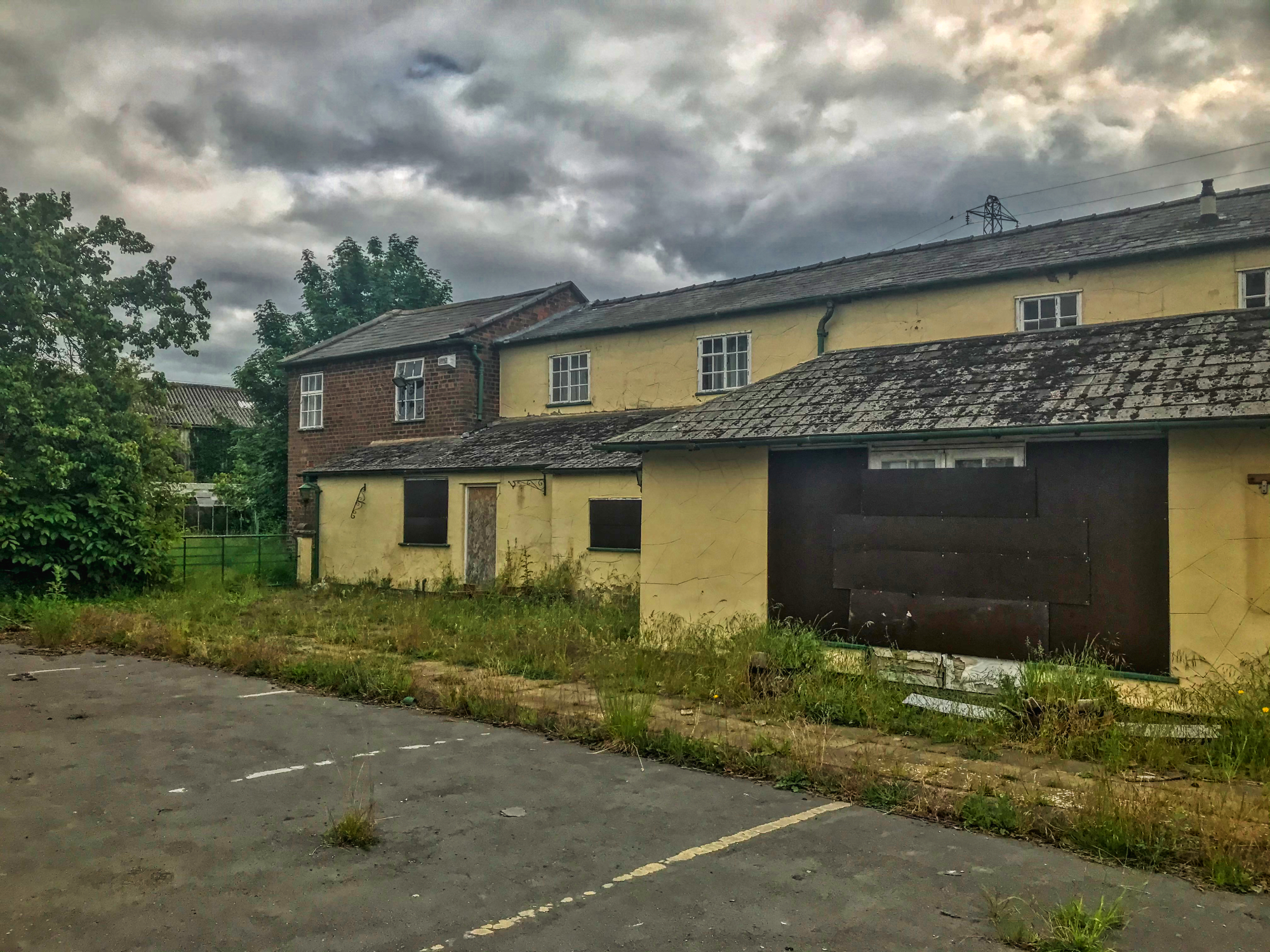 We may give this one another try in the future as I know the inside is better than the usual shitholes I frequent. 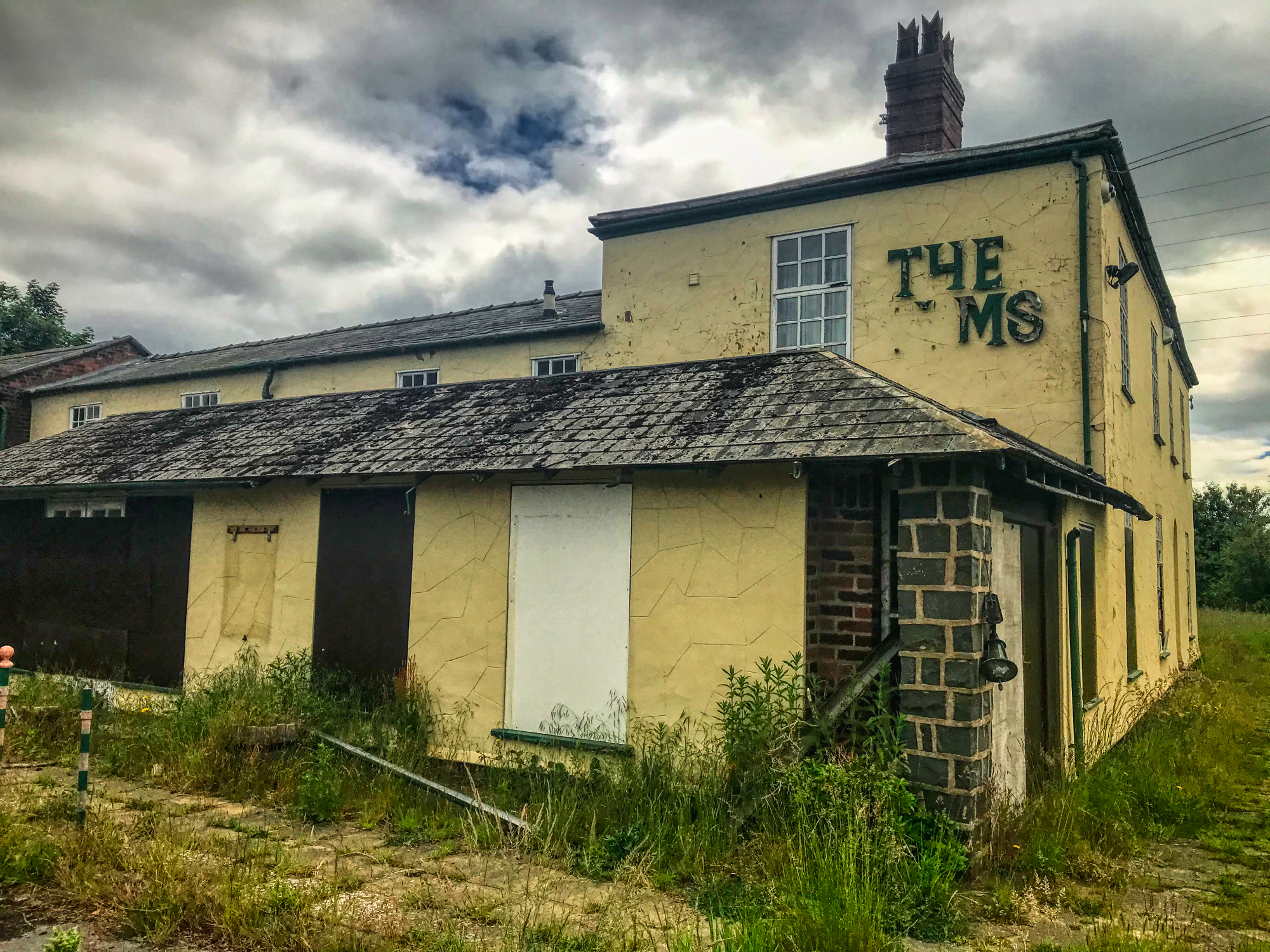 With blood dripping from my comrade’s leg, we beat a reluctant retreat. This was the first of many that day and starting with a fail always sucks. 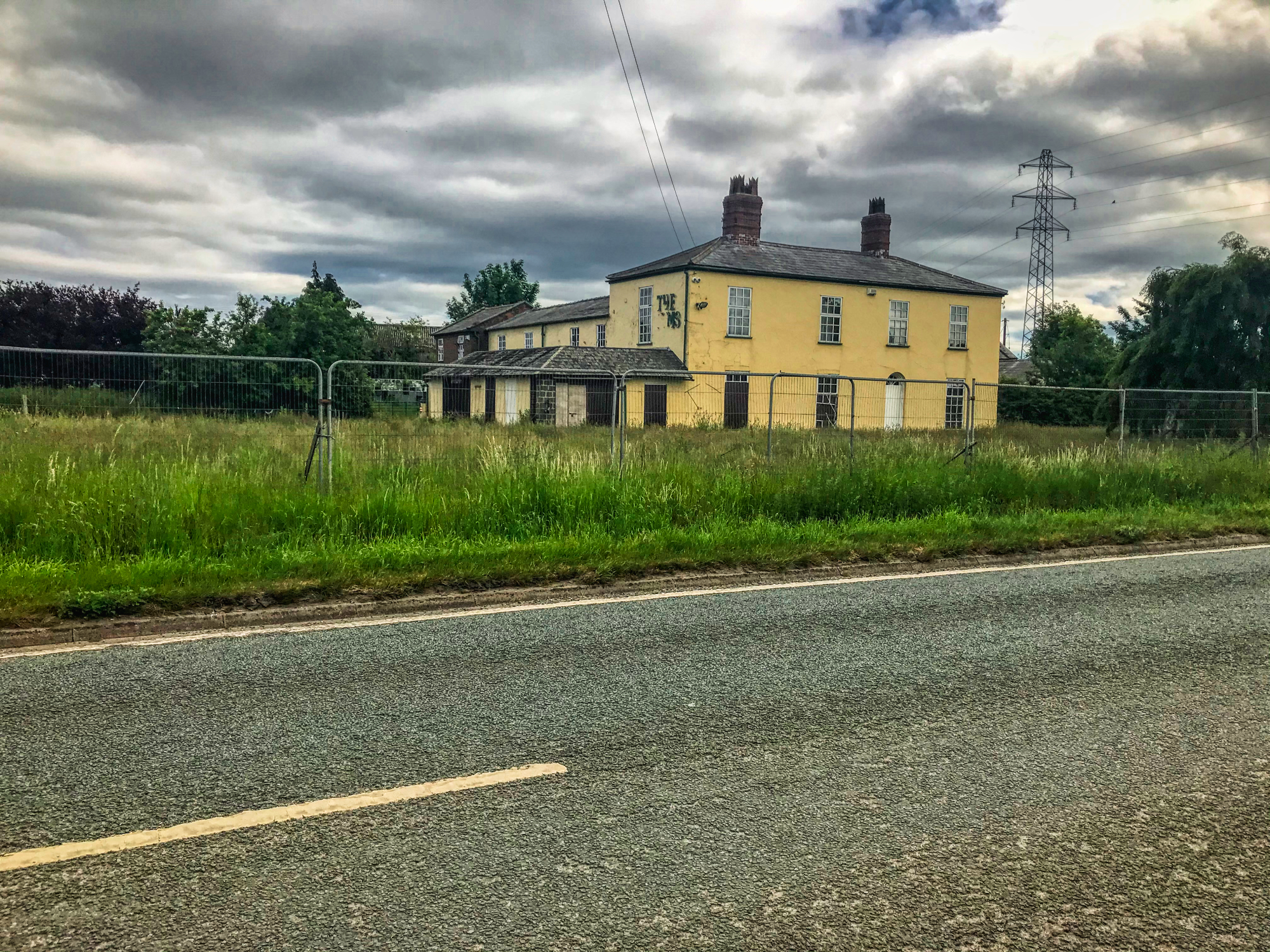 The lesson learned here is NEVER to explore in shorts, no matter how hot it is.

You guessed it.., this one is next to a railway line and has been empty for some years. 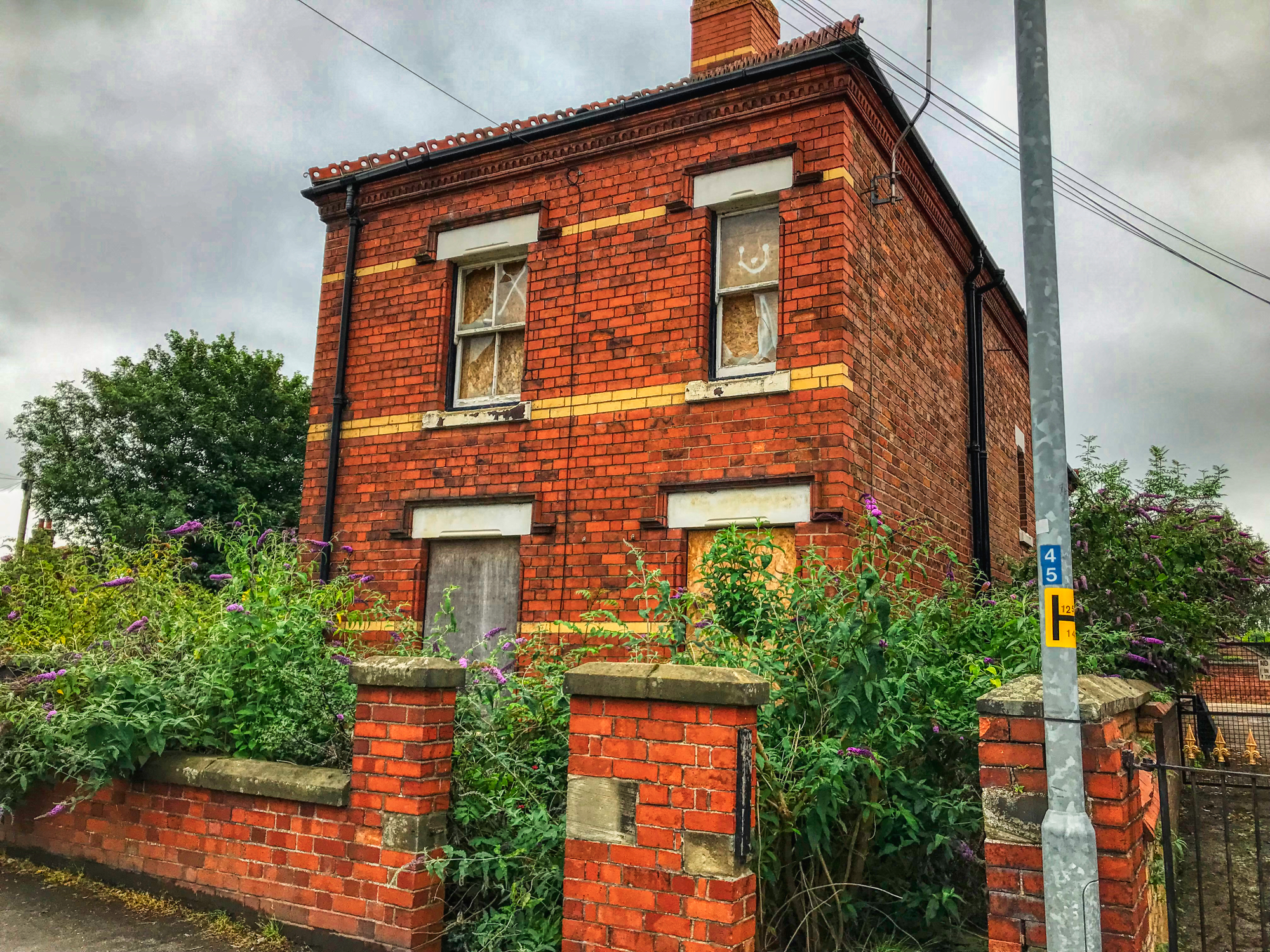 It was a strange-looking building that looked to have been chopped off and made smaller than initially intended. 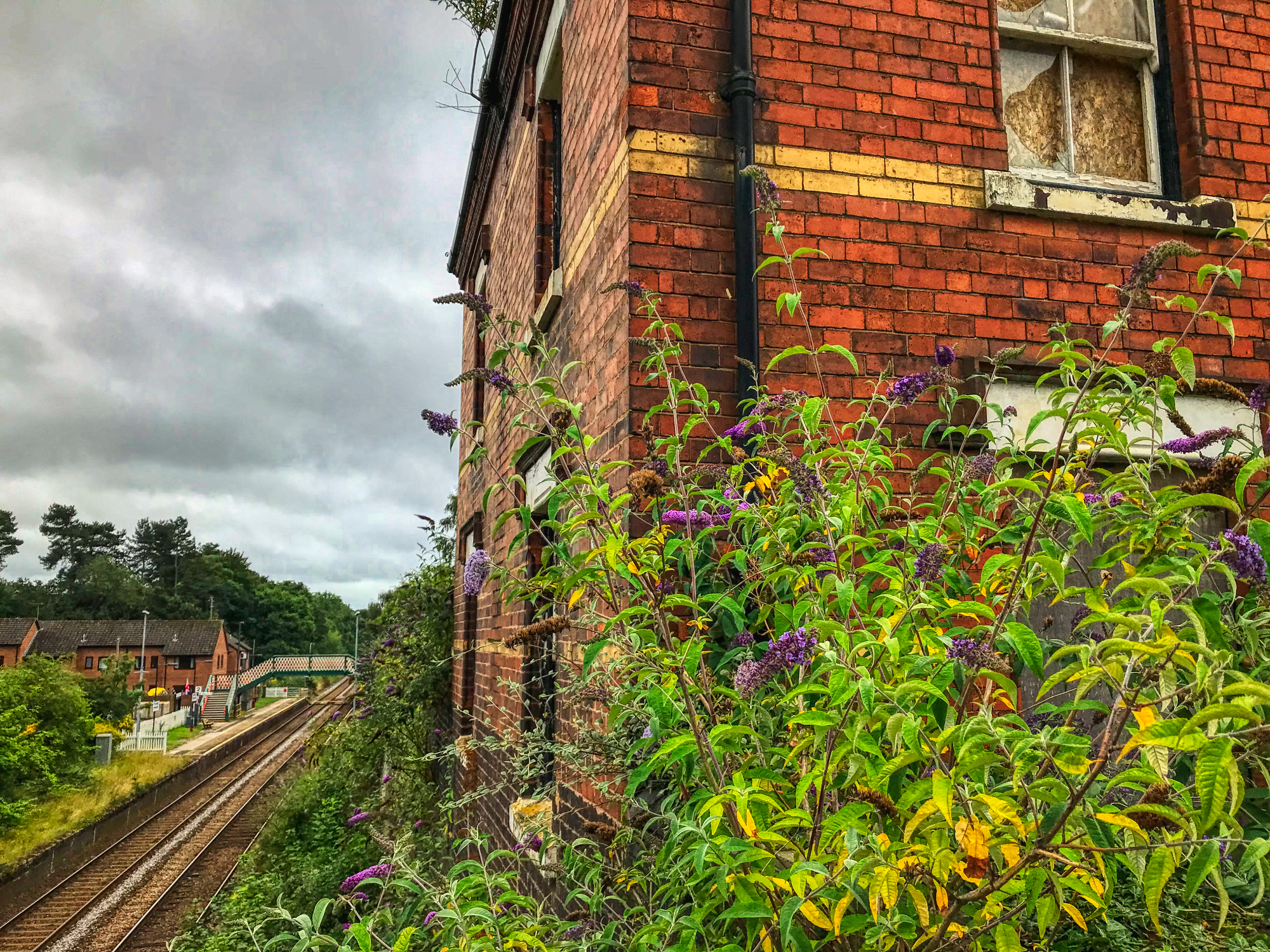 After a little Karen dodging, we slipped down this side alley infested with purple-looking weeds and studied the back of the house. 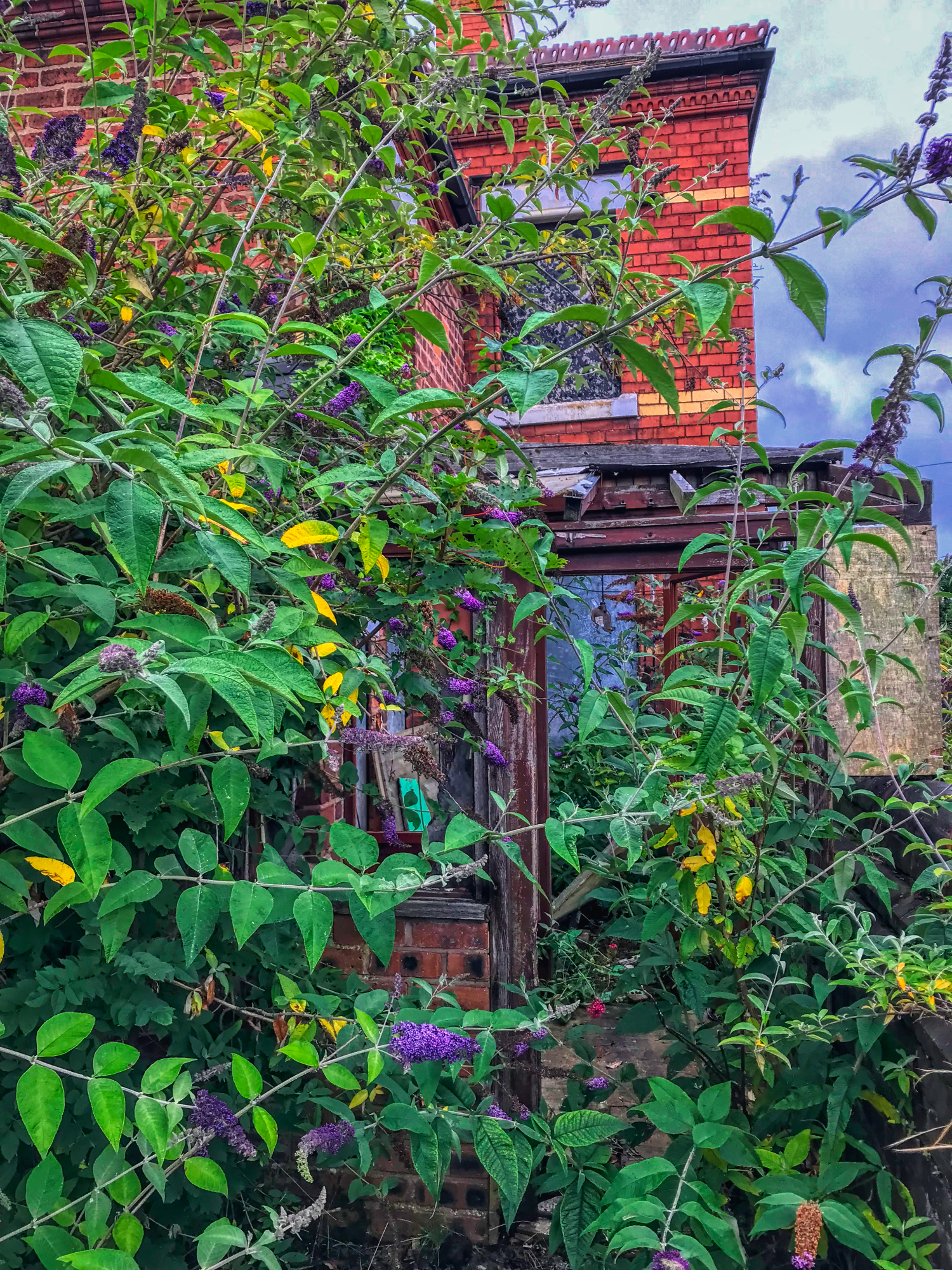 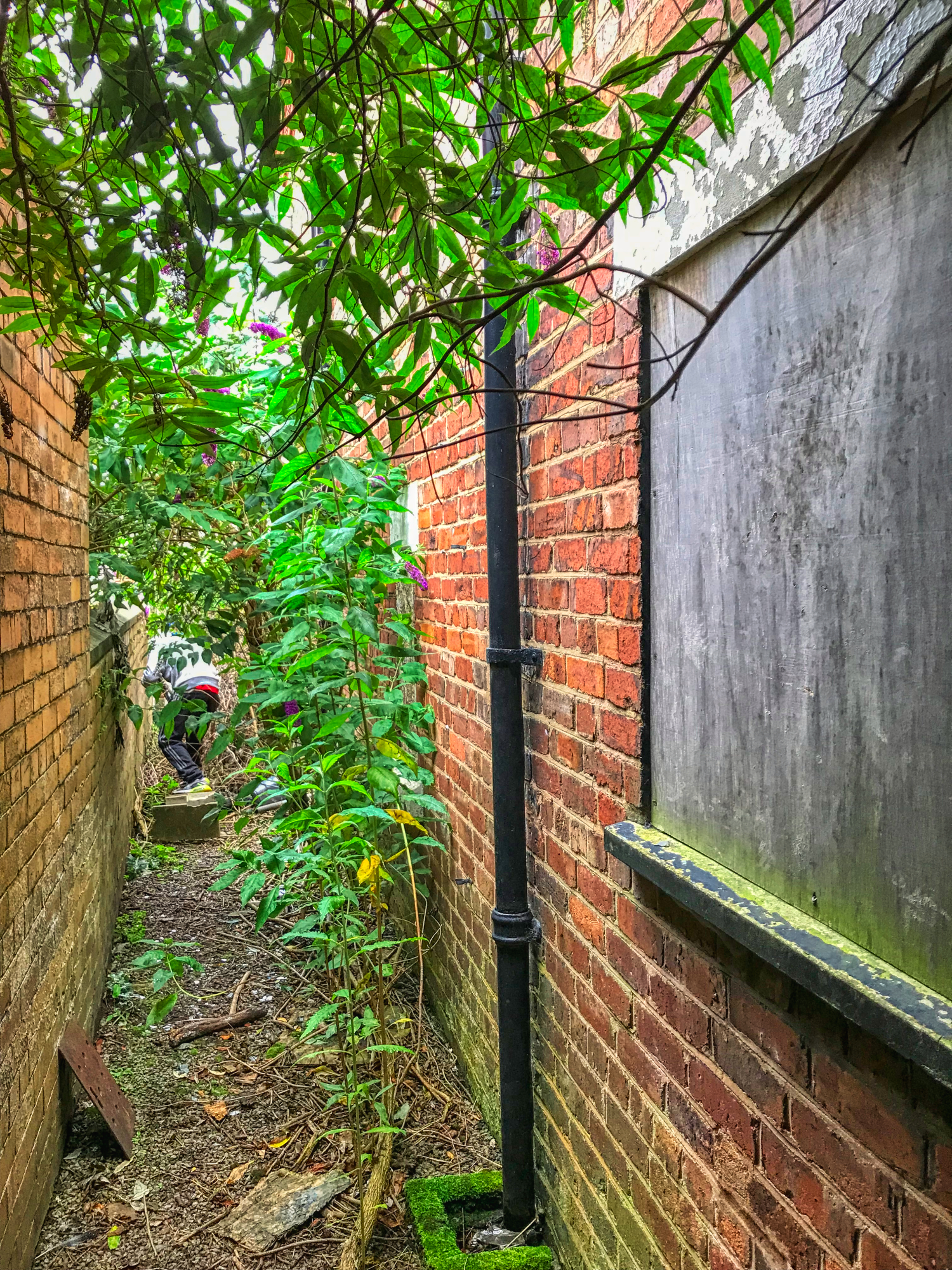 Bloody sealers again! The Welsh curse was coming on strong that day. 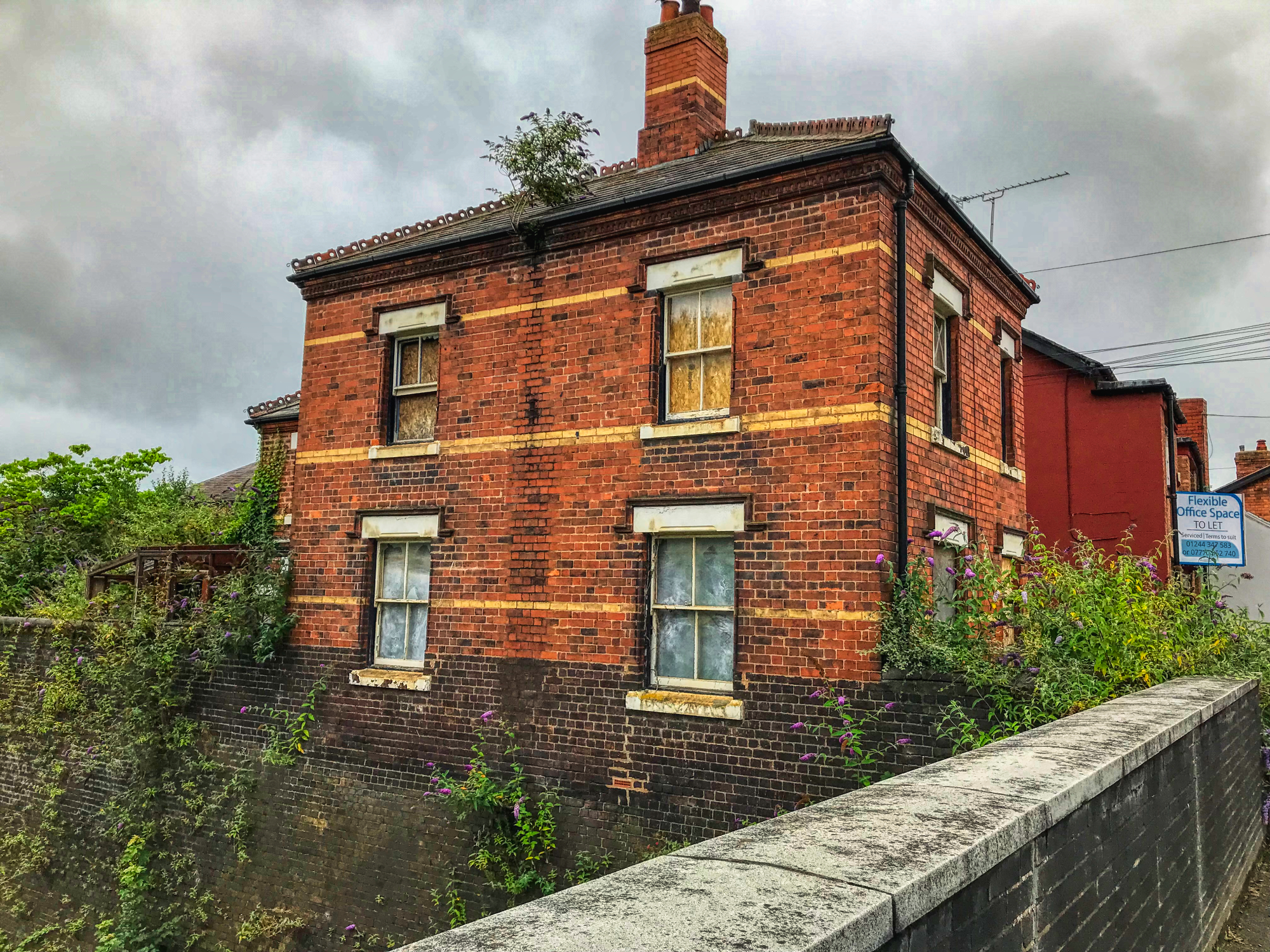 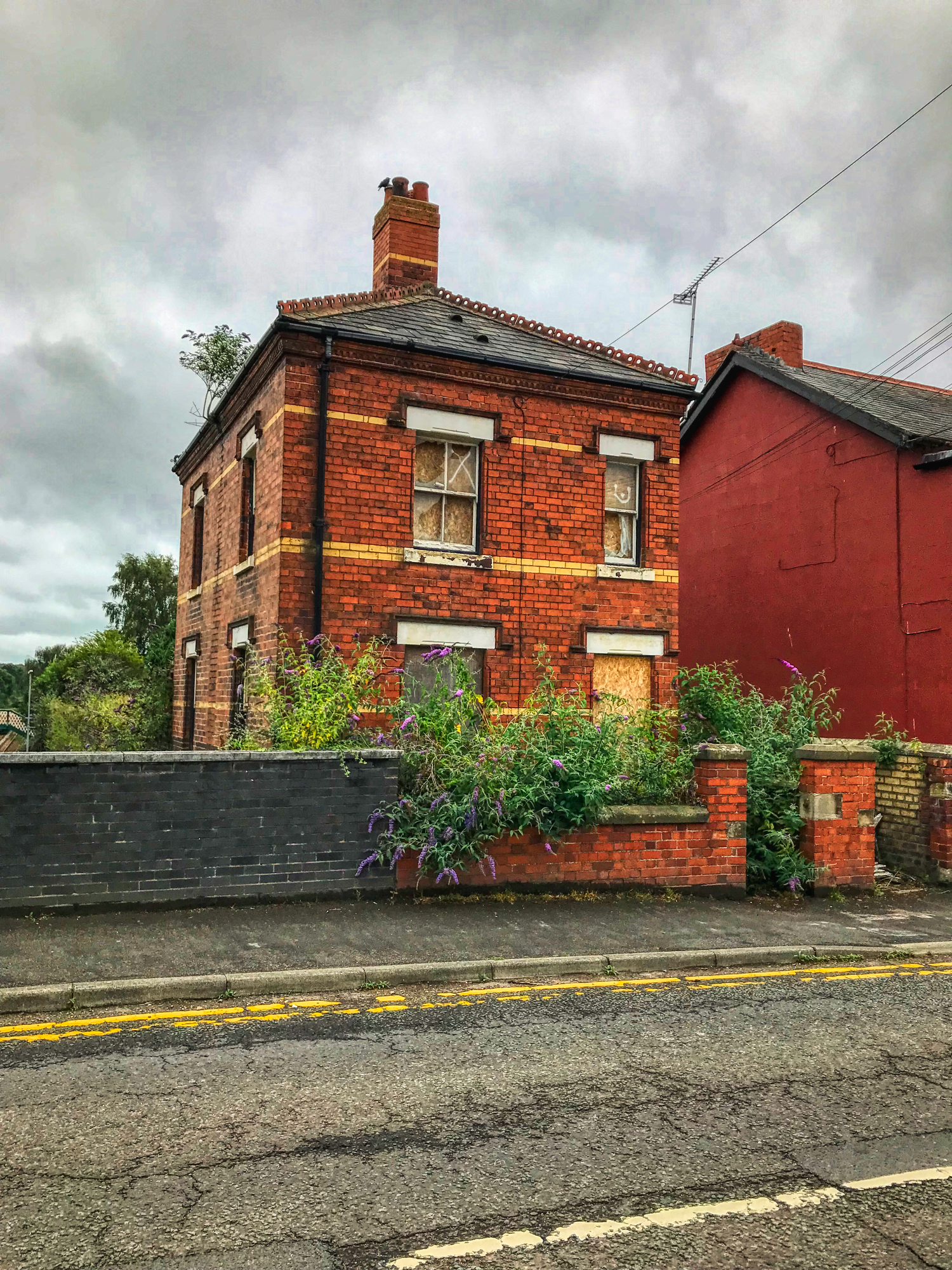 Whatever, there were to be many more really good successes that day, once again thanks @grindle for the excellent locations provided.

The little old lady in number two was obviously hungering for fresh meat!

Hope anidiotexplores leg heals nicelym barbed wire can be a pisser. I like to see the fails because of the sheer number of cool buildings I see round my way that seem to have absolutely no way in!

It must be a welsh thing and only a true Welshman (@grindle) can explain the mind of an old lady lusting over me.

well it's impressive to look at

I felt my balls and though I don’t want any more kids felt a little protective of them.

I thought you were ready to risk the most expensive, for the sake of your subscribers. My day is a little ruined. I want to believe that next time you will try better, my friend. Believe me, the absence of ball will not reduce my respect for your creativity. These things limit your potential.

I risk them quite a lot. Barbed wire and spiky fences don't always stop me but I know my limits. Pallaside is sharp, tall and unyielding and there were no breaks.

Even if you don't get in you still get something from these excursions in the form of a post. Maybe I should go around snapping sealed buildings :)

If that's the only way I can get you to start then so be it. If you can add a story about a ravenous old lady wanting your body then it would be better for it.

Hope you go back to Plas Teg sometime when little old ghost lady isn’t around. That place looks insanely cool.

It was very impressive looking but sadly not abandoned so does not fit my criteria.

Beatiful place,i hope i can go there👍

The little old lady in number two was obviously hungering for fresh meat!😎

A little imagination would take you a long way - @meesterboom

He's a cheeky monkey that one!!

You are on the dumbcunts flag list, congrats! How do I apply?

Hahaha!! Oh it's funny isn't it!! Such an exclusive club!

I replied to one of the batshit gangstalking spam comments. He actually monitors the replies.

Oh, lol. I remember that!! So many fruitcakes in the past and even now!

It is what makes the place so flavoursome.

Some great locations to explore. I love all that old architecture. You have so many great places to explore. Most of our locations are a little more boring and industrial than these places.

Yes, we are blessed with lots of stuff to look at and it is quite different (except for the Pidgeon shit).

Such a shame to see most of all that just deteriorate away and get eaten by nature!

glad you enjoyed your fails!!!
plas teg, yes a little old lady lives there on her own, she has featured in a couple of telly documentaries.
It has also been used in a televised paranormal load of bollocks involving girls aloud FFS!!!!!
up until a couple of years ago you could pay a few quid and get a guided tour of the place, but i think the dear old lady, who is actually an artist, is on the demise. (watch this space)!!!

That's a lot of upkeep for a little old lady, the place was very impressive though I failed to snap it properly.

she is very eccentric and the house is stuffed with treasure, she probably has servants!

I did a little reading up, not showered in 29 years.., hmm I am sure the tales are exaggerated though she does look like the wicked witch of the east. thats the lady
i can smell her from here!!!

From my island here in the Gulf of Thailand the English Architecture looks amazing. Especially that old Lock House! Very cool.

We were both at Bangkok and I was also a Krakow, I'm sure you attended the latter. Weird names like ours are more memorable, that is my excuse!

I was at Krakow too. Yes the weirder the name the better! hahaha

I'm sure we've met. Just can't put a face to the name....other than that greasy Slobber Chop image you use for your profile, and that's good enough for me! hahaha. Take good care and I'll try to swing by more often :)

Since I grew up in a small farm town ... I think that the lady in #2 would have welcomed you both in for tea, then given you a personal tour. At some point she'd get tired and want to have a nap and tell you to continue your tour on your own, but please close the door tightly when you leave.

Of course, it'd be her ability to gut you both with a mere flick of a blade that would be the reason she had no fear. ;-). Years working on the slaughterhouse killing floor.

Despite us sneaking around like ninja's.. she waved, it was all a little much for me.

Perhaps she had hired an "escort" for the evening and thought that she got a two-for-one deal.

excellent publication my friend @slobberchops, the pictures look like they were taken out of a magazine, I liked them very much.

I don't think I have ever seen so many busts in one day! They were actually pretty amazing buildings, most of them. The Manor House was incredible! The Dobermans were a concern. Little old ladies don't do that. Some old man with no sense of humor might.

What's up with Wales and using sealers to keep you bad boys out? Those were some of the best places, all intact, and looks like the insides would be pretty decent. I guess sealing them up saves the clean-up later from the adolescents, little hooligans. There is a difference between destroying property and exploring and photographing them.

I saw an abandoned building last week and they had a sign at the end of the drive saying buildings are abandoned for a reason and should not be treated like playgrounds I have seen that written somewhere online, the little plagiarizers.

I am so sorry about the barbed wire boo-boo. Always the risk. You guys should wear athletic supporters. :) Protect thyself and the family jewels. @bingbabe would appreciate it, I am sure.

Those purple weeds are called butterfly bush or I think the UK calls them summer lilacs. The garden club would be horrified that you called them weeds. LOL Anyway, it is always fun to tag along!

What a magnificent manor, despite being neglected. Imagine what it must've looked like in it's glory days.