Fails of the Urban Explorer: A Quartet of Failures XI

I have a surprising lack of fails and a very healthy count of 46 Tales still to tell. Things have been going well this summer although recently it’s been getting tighter. 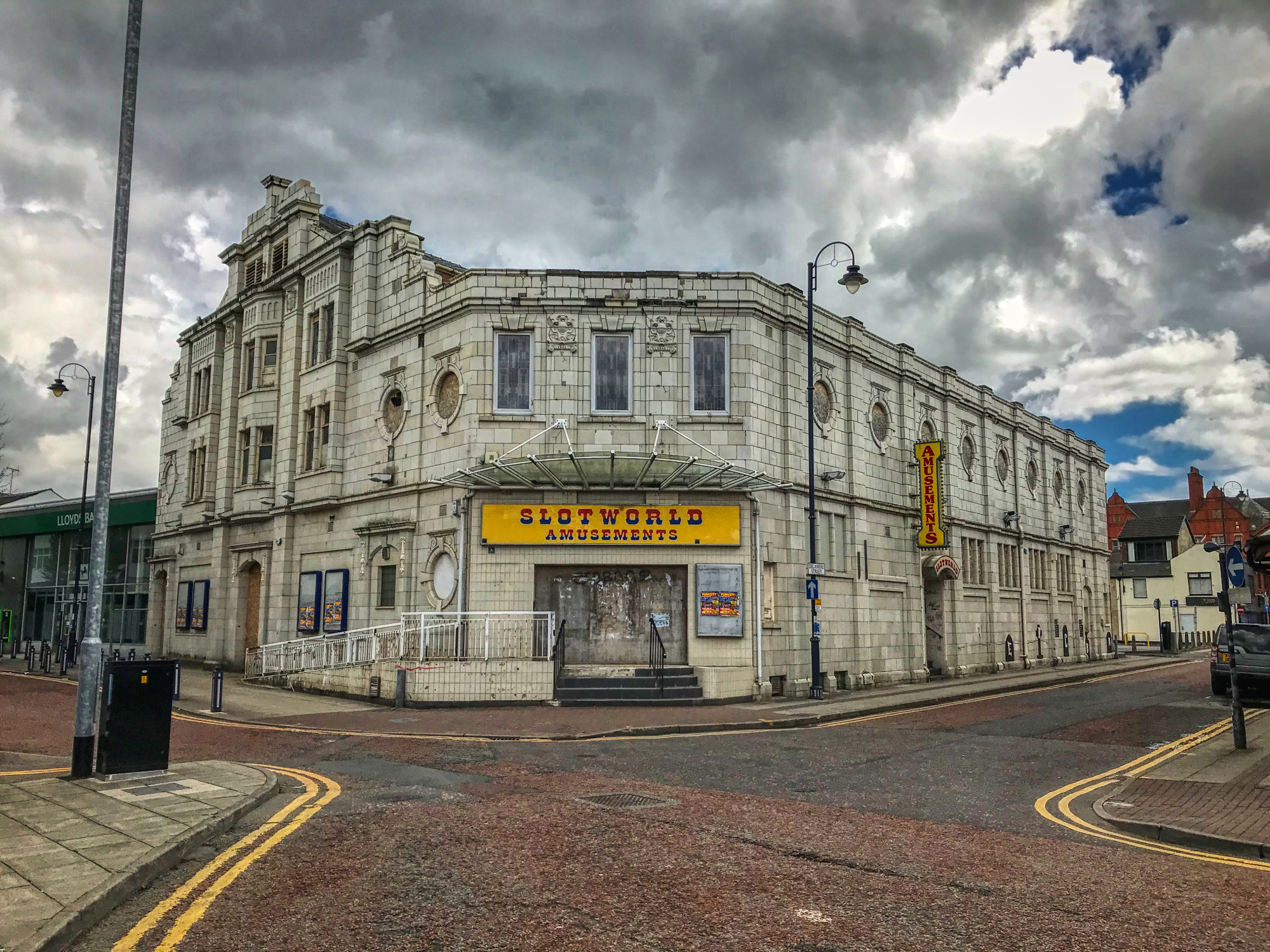 With COVID easing, there are more people about, more renovations starting, and more ‘Karens’ interfering. If you are unfamiliar with this term then read on:

So why subject us to all the rejects you might say? It's all a matter of keeping them under control. The stories need to be told, lest my memory fails me and I forget everything.

The clouds were gathering as we approached Slotworld Amusements. It was one of those old type buildings that I never manage to get inside. 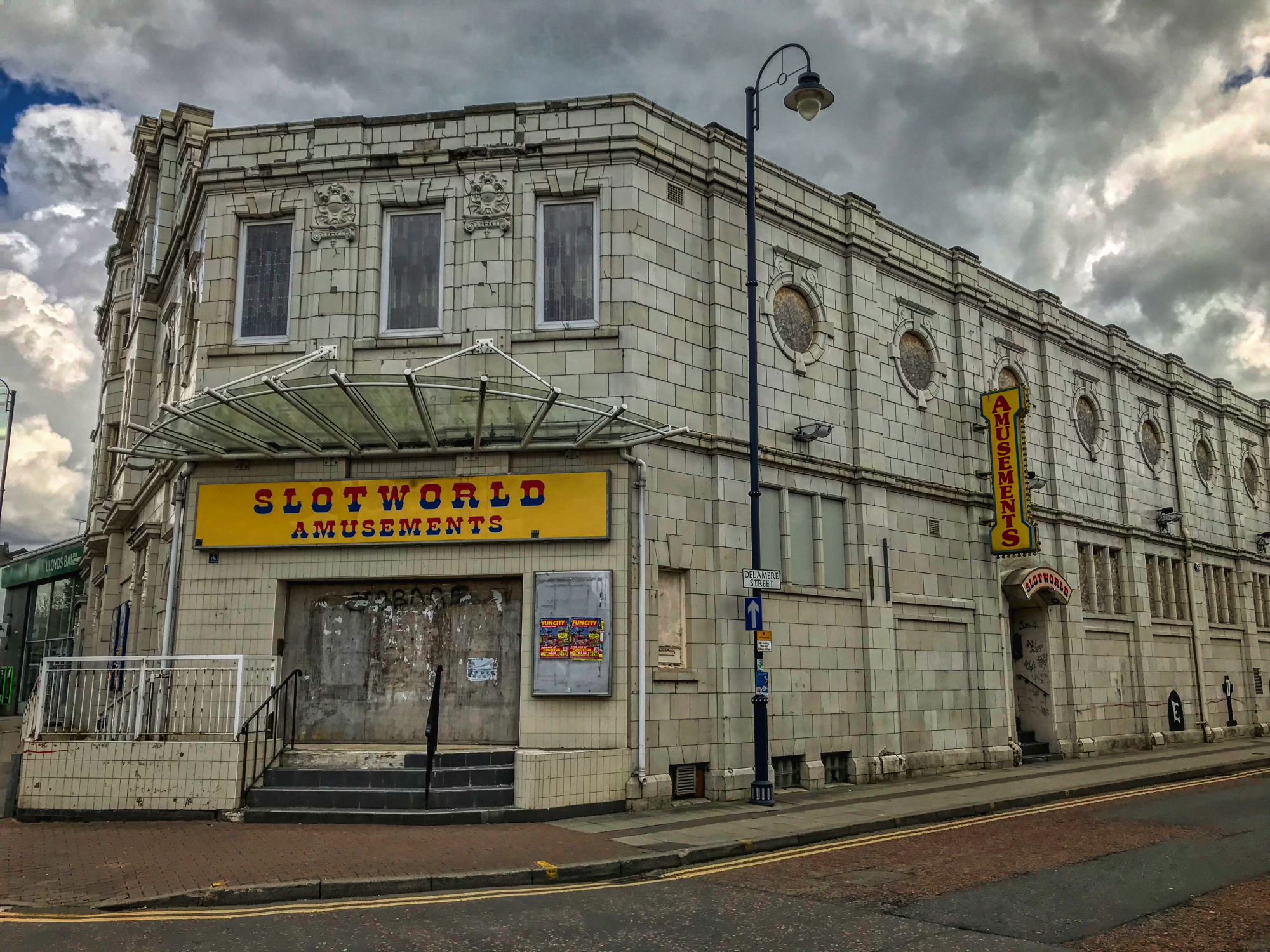 The curse continues on 19th-century architecture that resembles an old Bingo Hall, Cinemas, or Victorian Theatres. 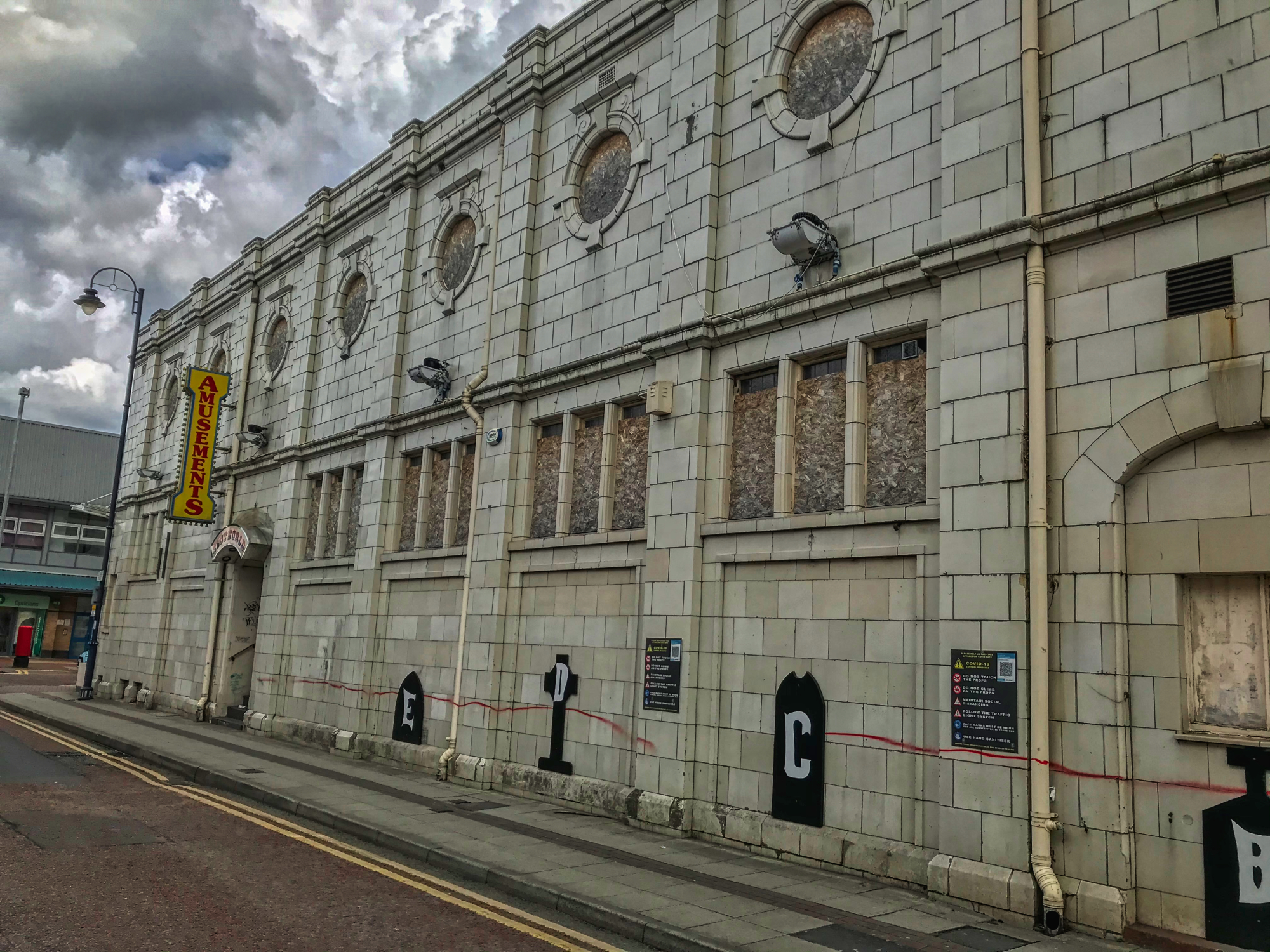 '...This one looks like something out of a Fallout game'...

It went through my mind while knowing the inevitable was coming. We walked down the side and around the back where it is a known verified fact that approximately 96.43% of access points are. 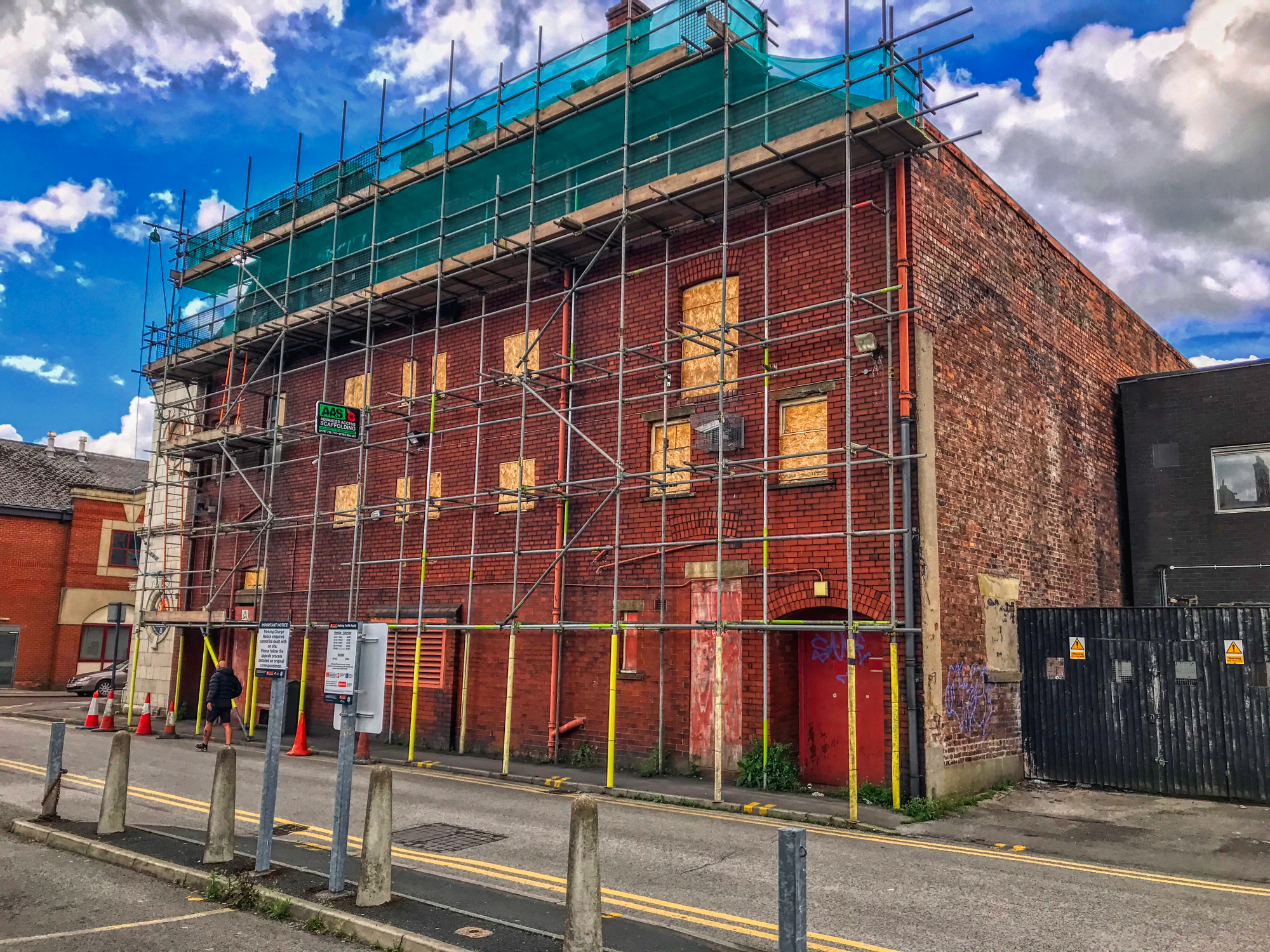 Oh yes, I could see it. All I needed to do was climb up that scaffolding and crawl through a broken window, all in broad daylight with people milling around. 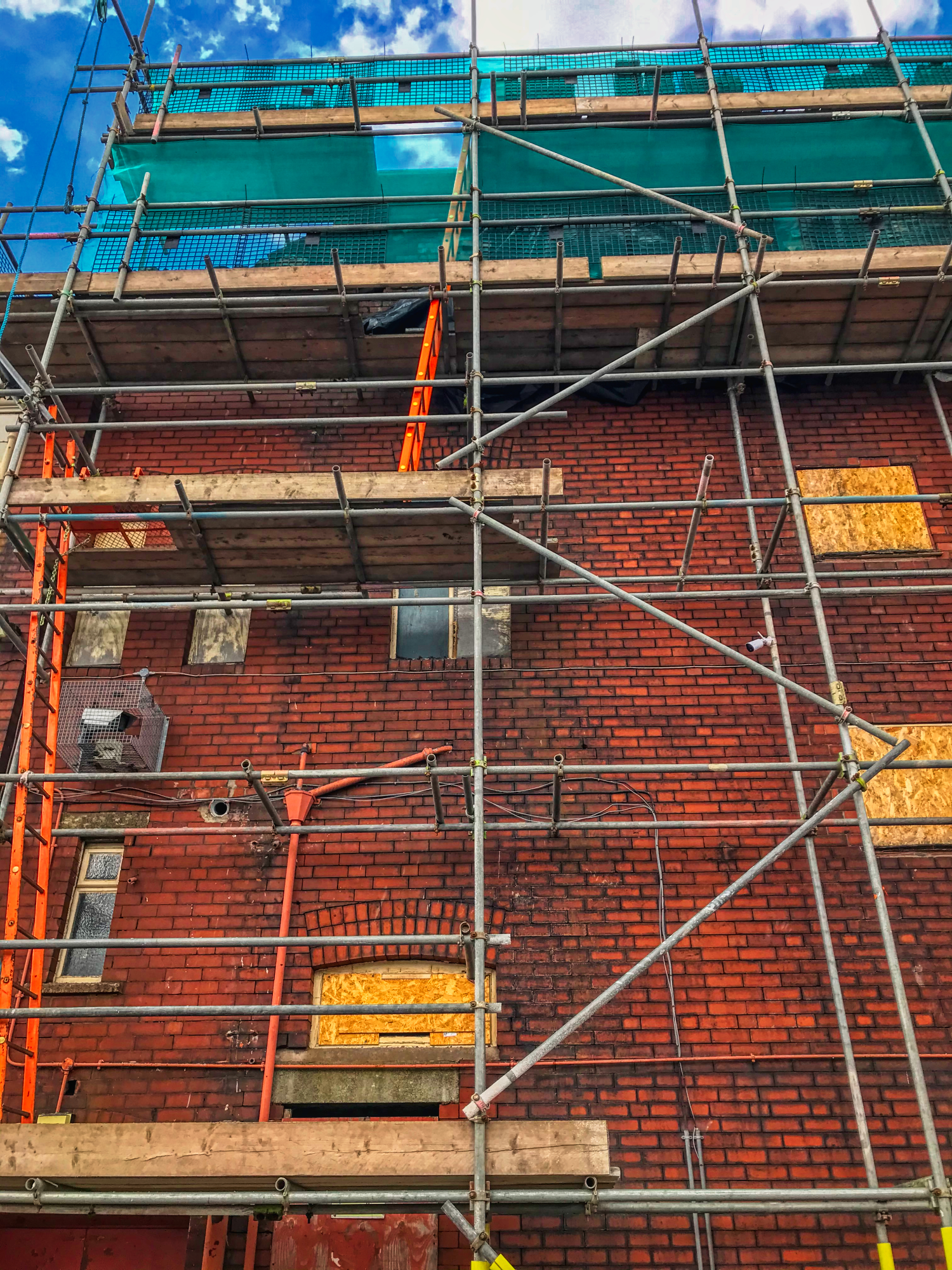 Well fuck that, I am extra bad with heights which was a side-effect of growing up and I would rather not have an ambulance arrive to remove my corpse.

After driving down a endless narrow windy road that provides no overtaking at all, we, at last, reached the historic 16th century built Corinst Hall. 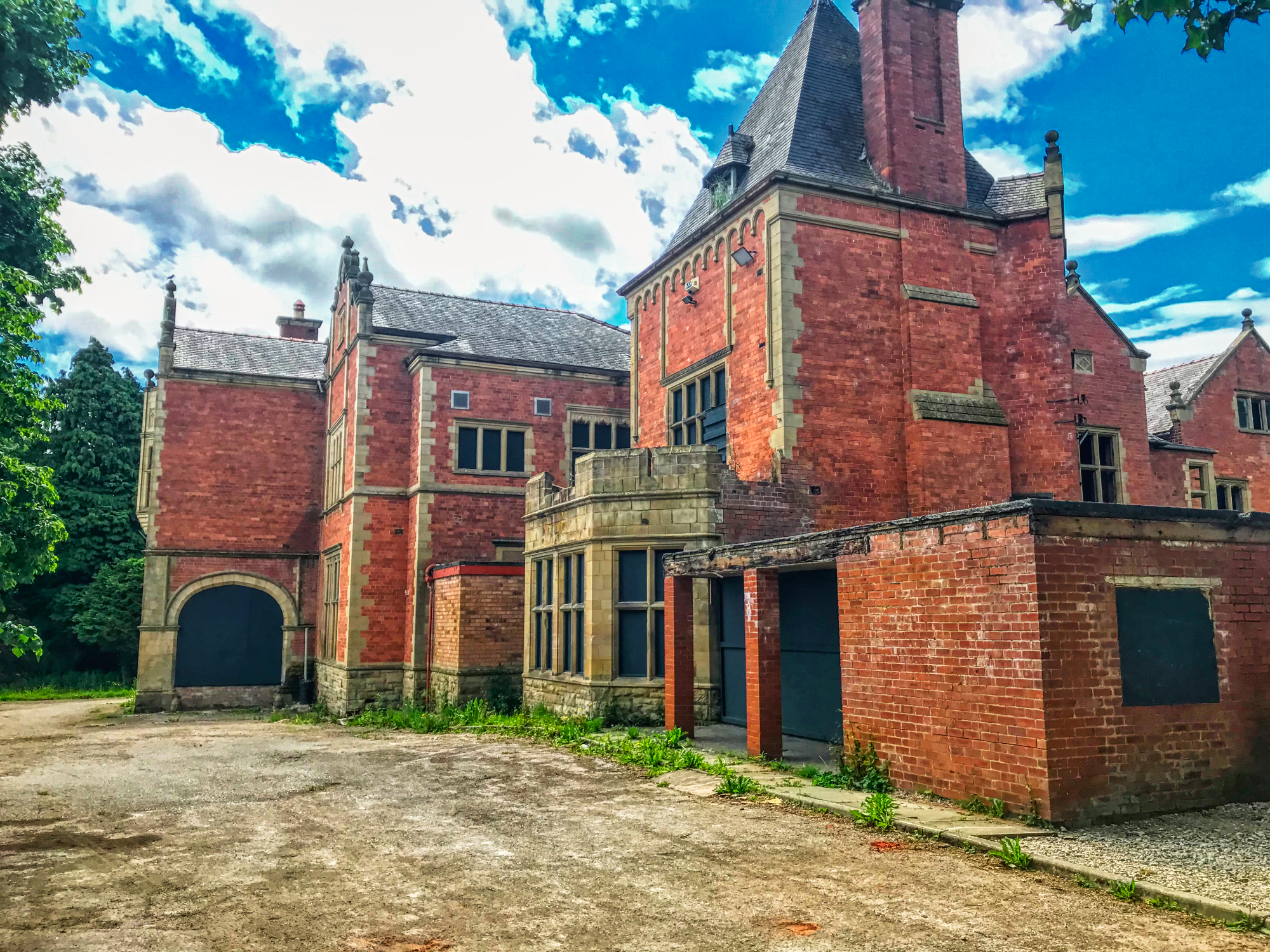 Scrambling up a slightly muddy bank brought us into the outside grounds which were thankfully Karen free. 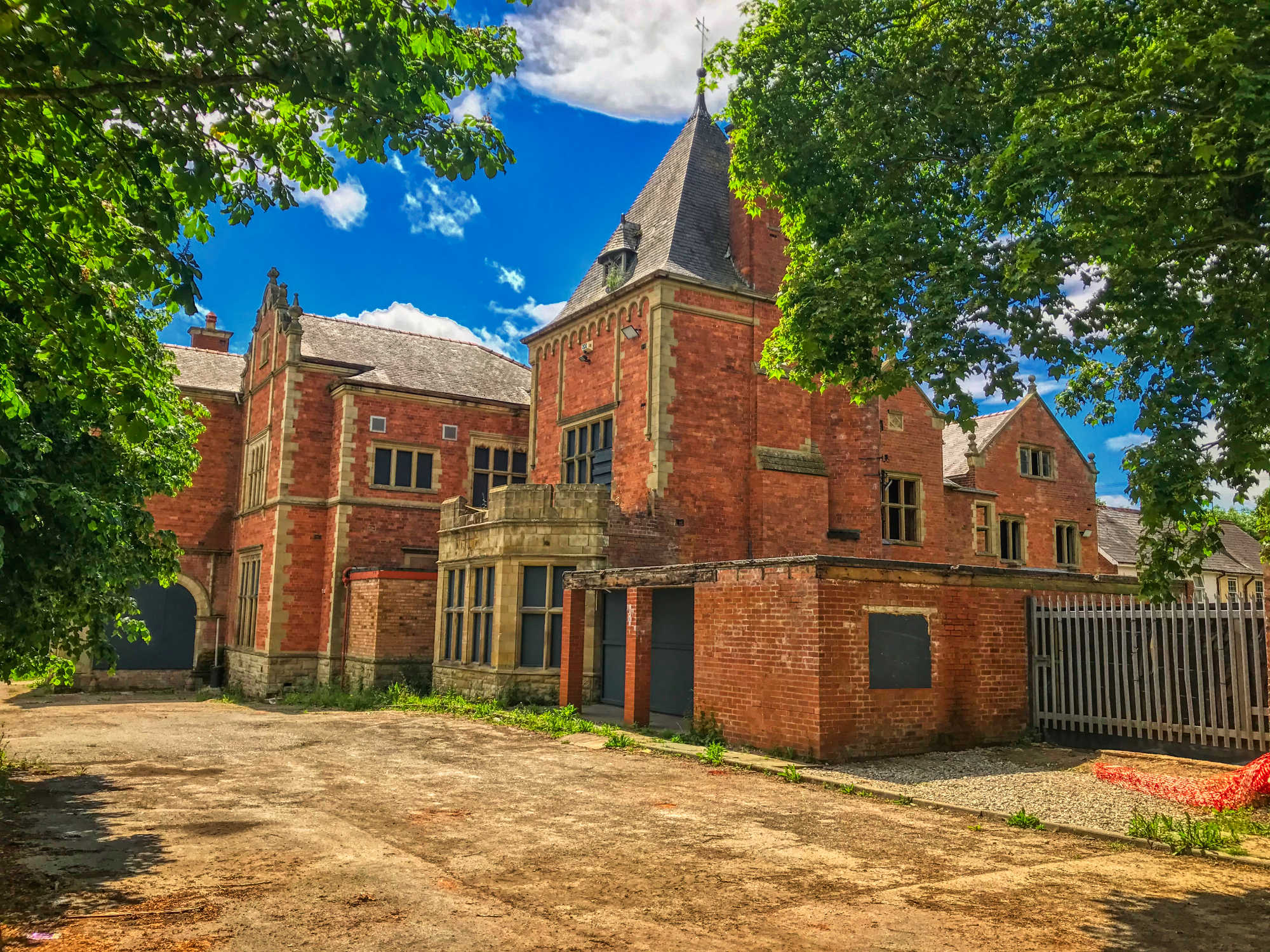 ‘It’s as sealed tight as a nun’s vagina’, I thought with dismay. 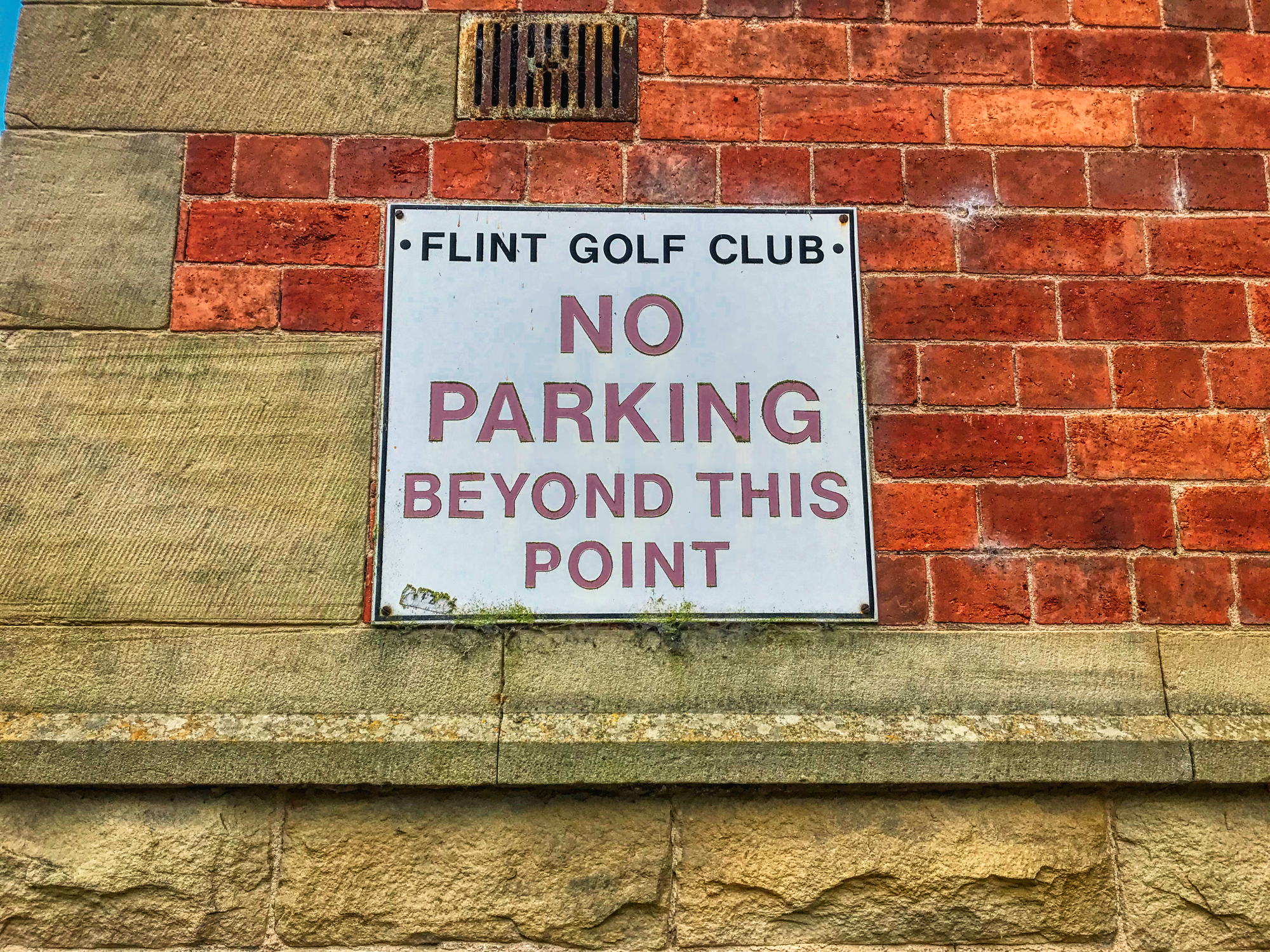 Peering around a corner we noticed Flint Golf Club along with a few golfers gawking at us suspiciously. I should have dressed like a golfer, it was a fatal mistake that would cost us dearly. 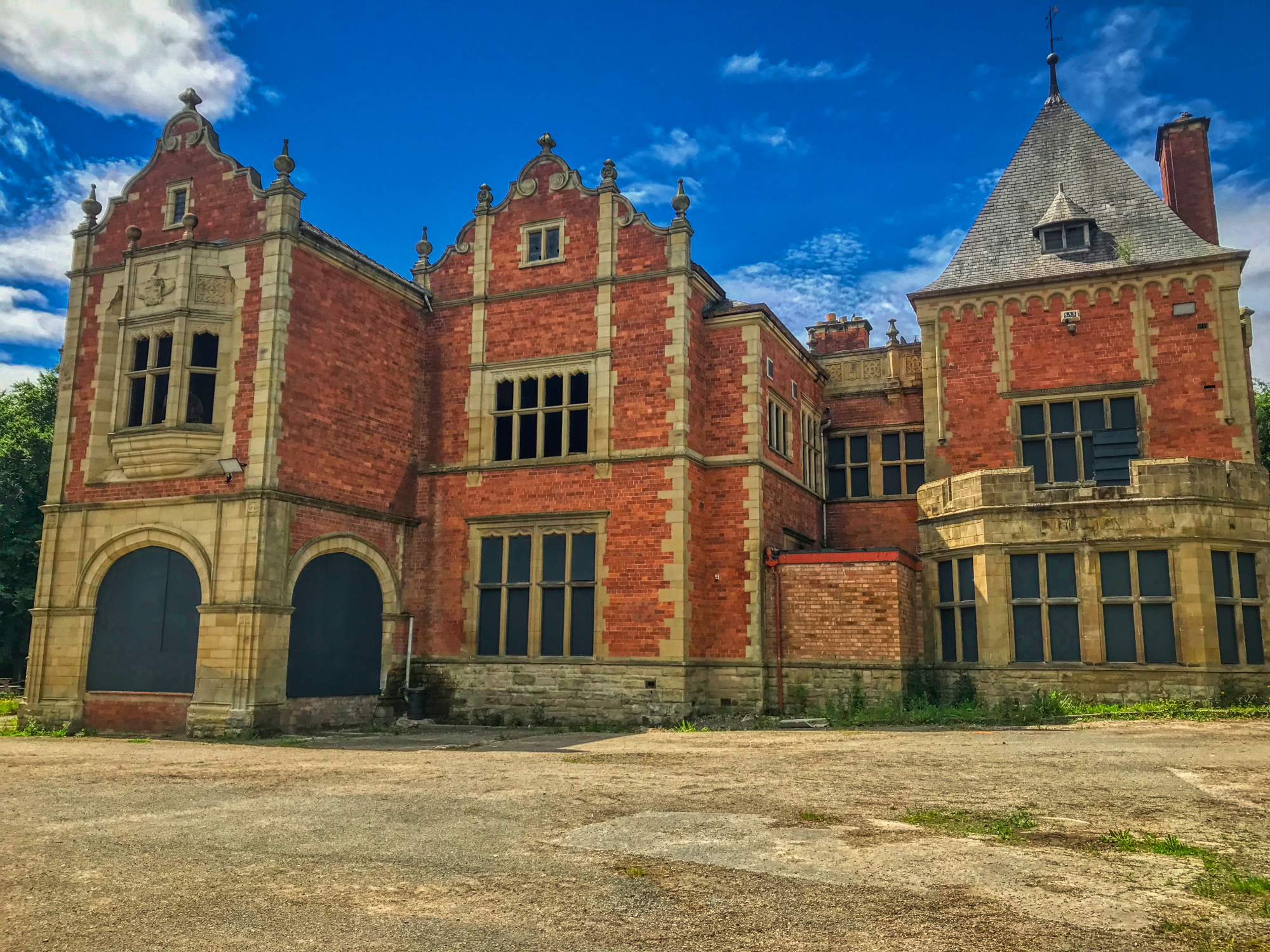 All that way for nothing; we were never going to get close to Corinst Hall. These externals were a weak consolation.

We were trying to get into what looks like an old castle only today. Google maps revealed a tasty-looking entry point only Google maps was out of date. 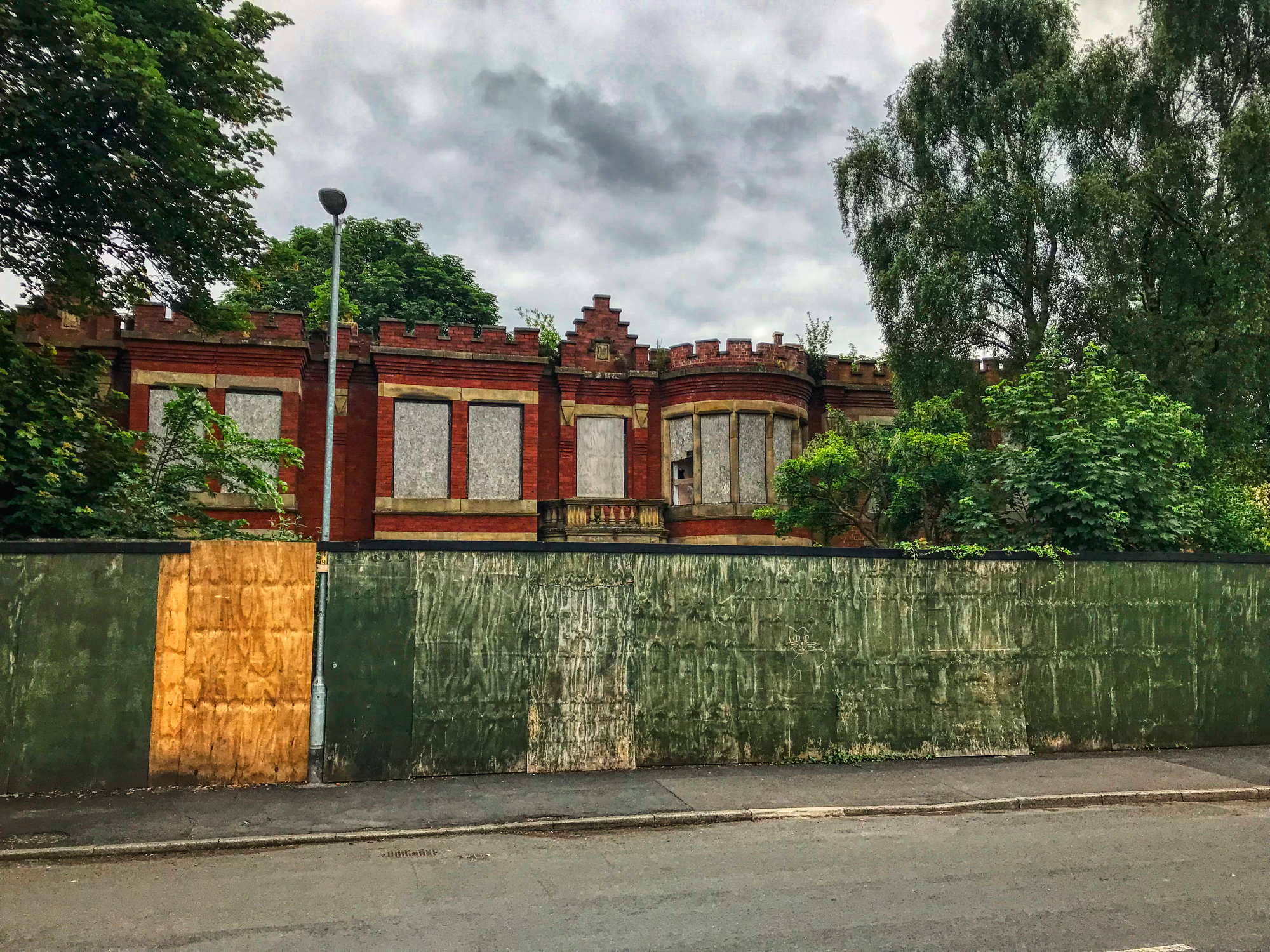 I heard stories from @anidiotexplores that the local kids have been wrecking this once dignified and unique looking care home. It was a case of too late. This 12-foot sturdy fencing has been here for years but used to have gaps. 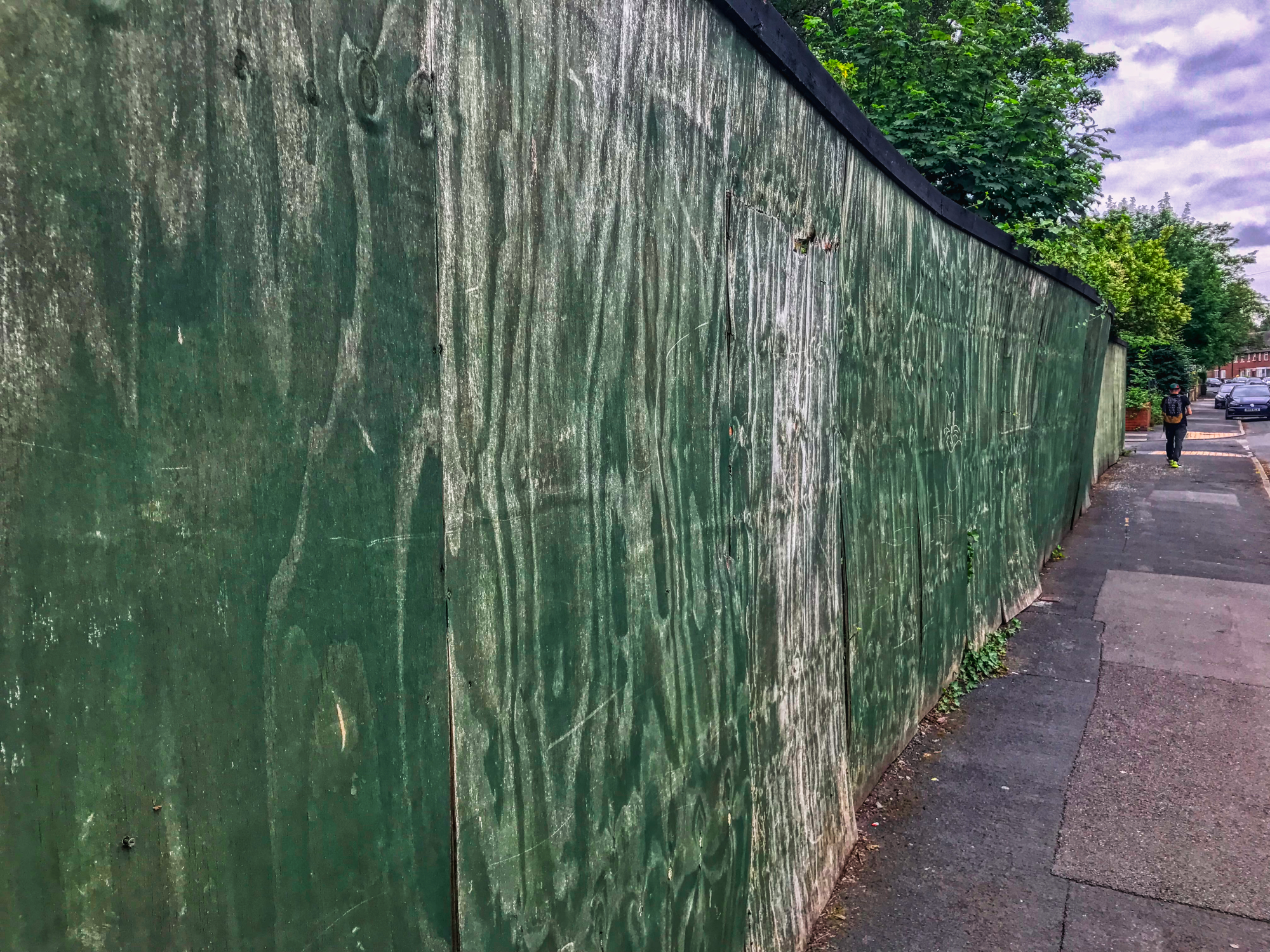 How sturdy is it? That is quite some wavering, but we were not going to pull it down. @anidiotexplores lurks around in the distance. 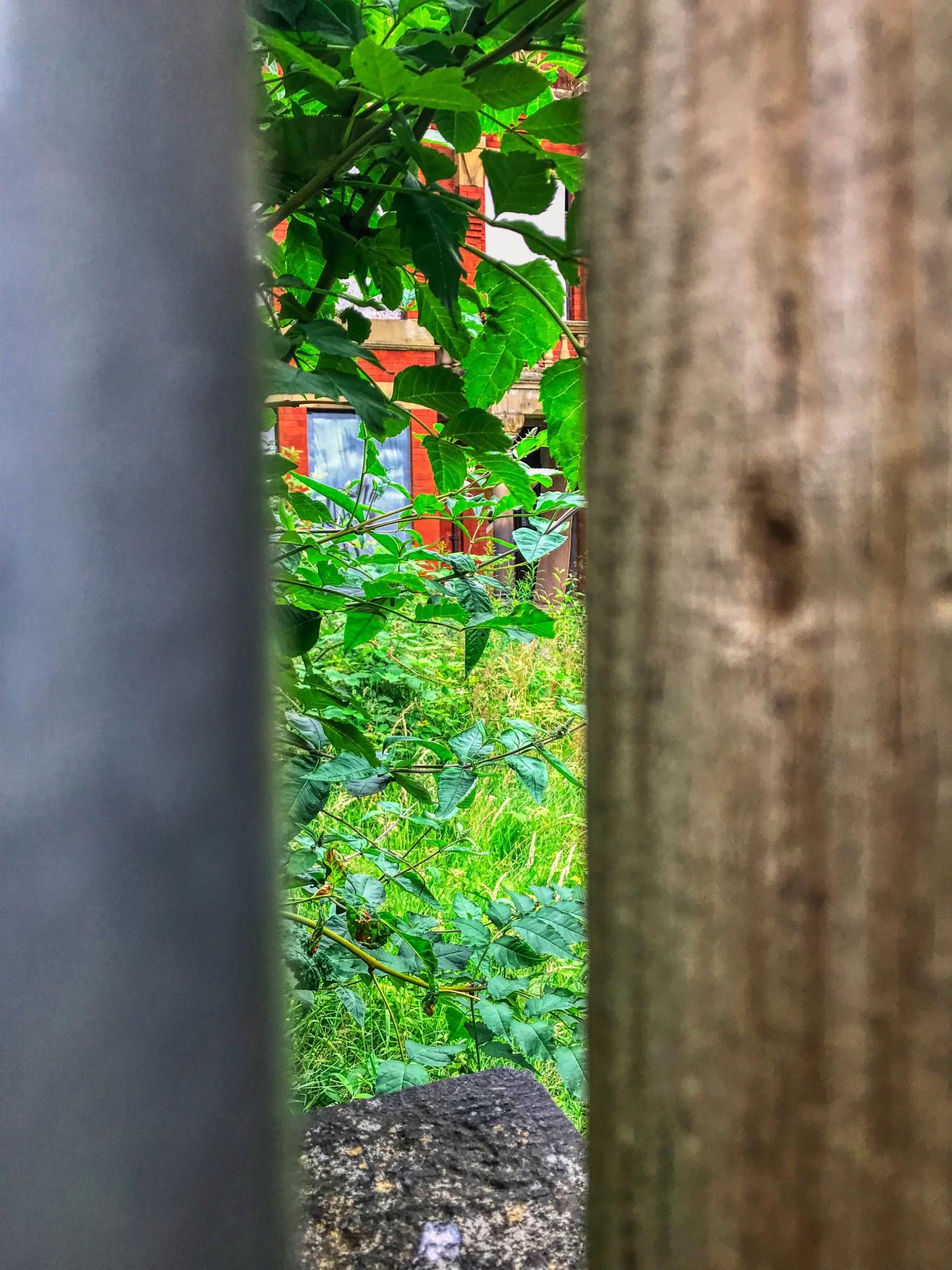 A peek through the smallest of gaps showed nothing; too much damn greenery blocking the view. The only way in is via somebody’s garden fence. It’s never a great idea to go that route.

We found this by accident driving around the outer suburbs of Liverpool a few months ago.

"What the fuck is that", exclaimed @anidiotexplores. 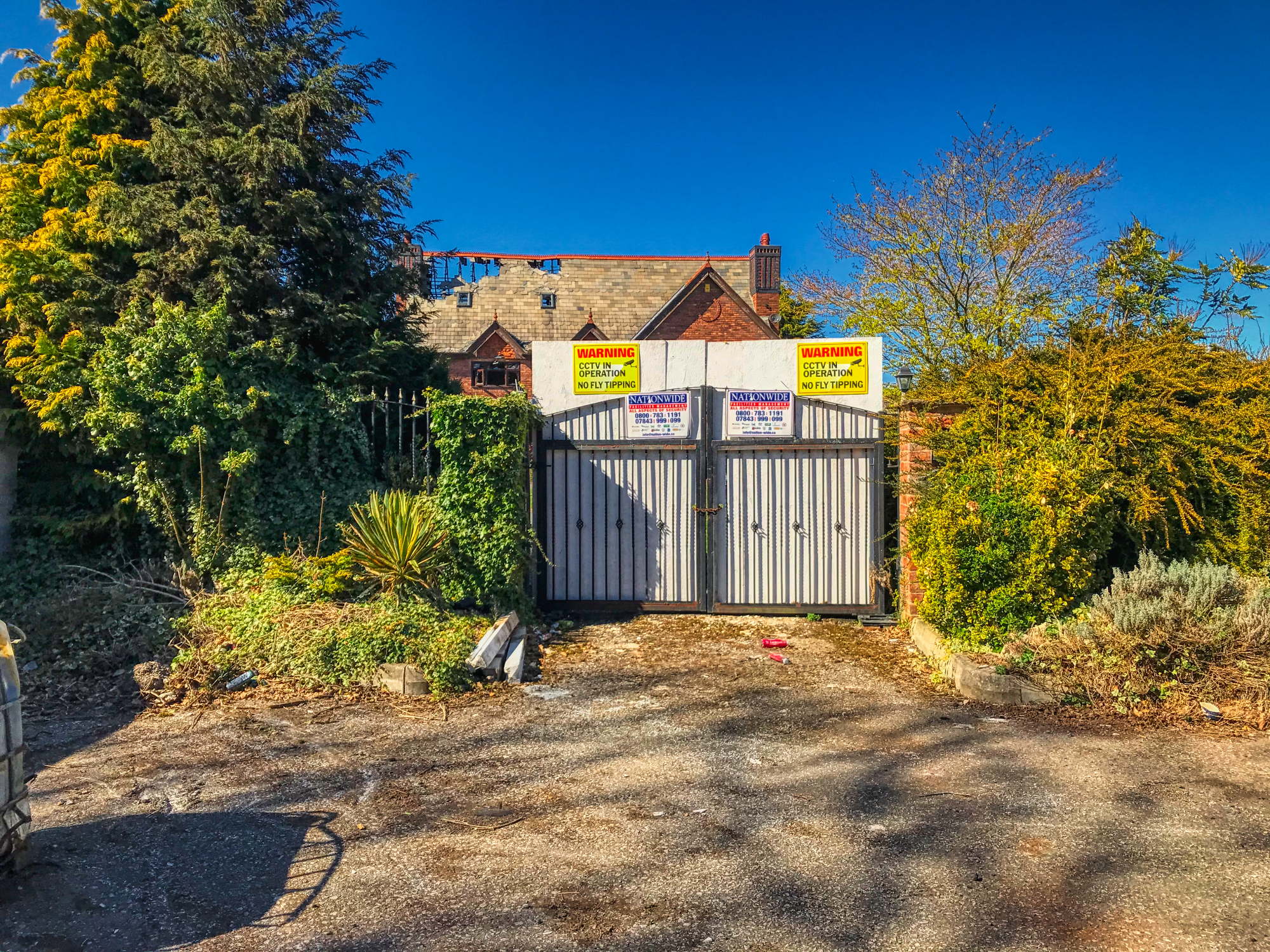 I did a U-Turn and parked in the only possible place which was at the front of this curious-looking house that looked almost new.

“If anyone comes they can block us in and we are fucked”, I said. It was true and we would need to be rapid.

We penetrated the grounds with ease noting the security cameras which could have been active. 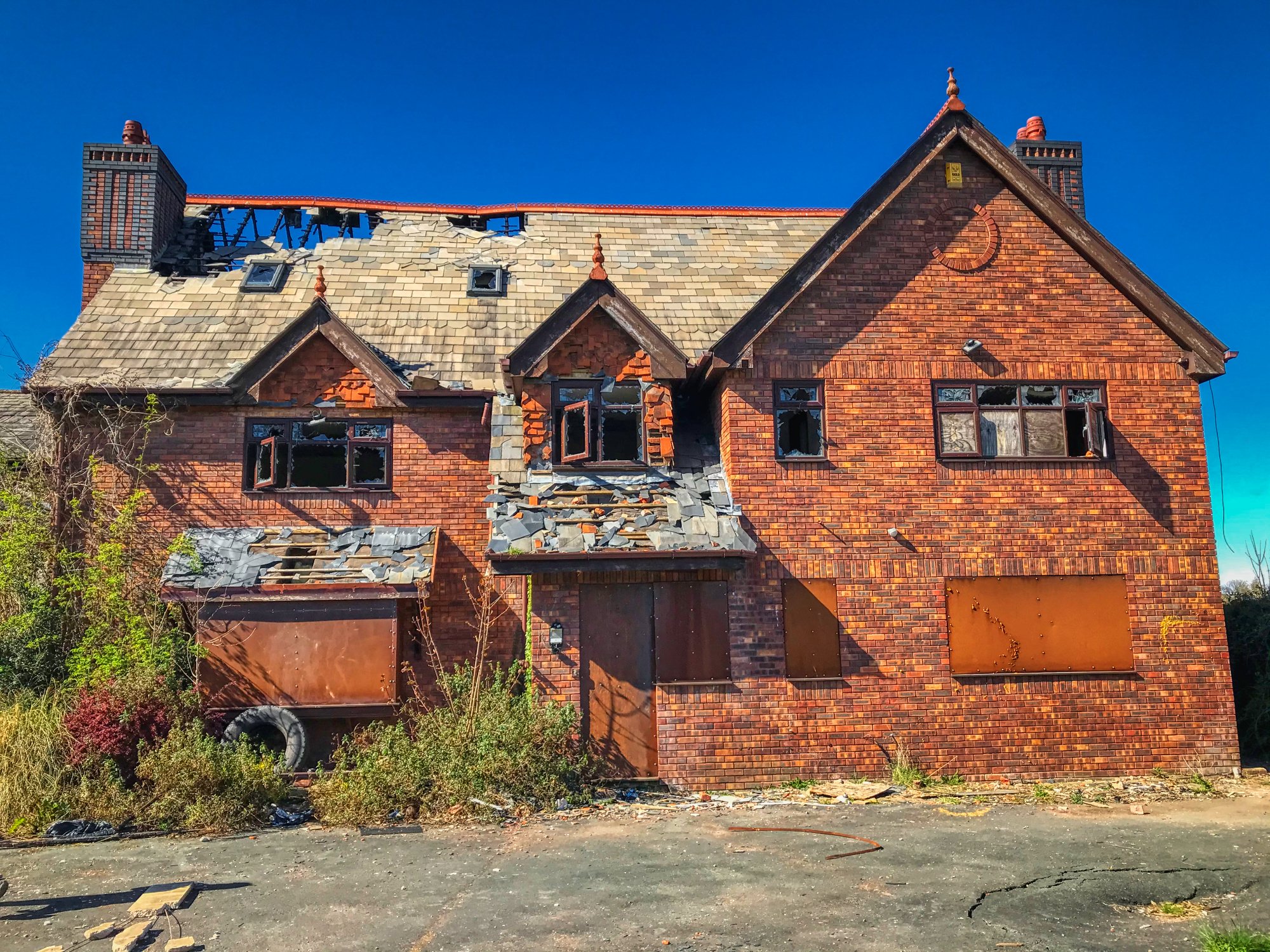 Someone had been inside. Can you guess the optimal way in?

Climbing is not exactly my forte and what would be inside anyway? Cinders, Ash and Charred Wood probably. Too much effort for a burnt-out wreck. 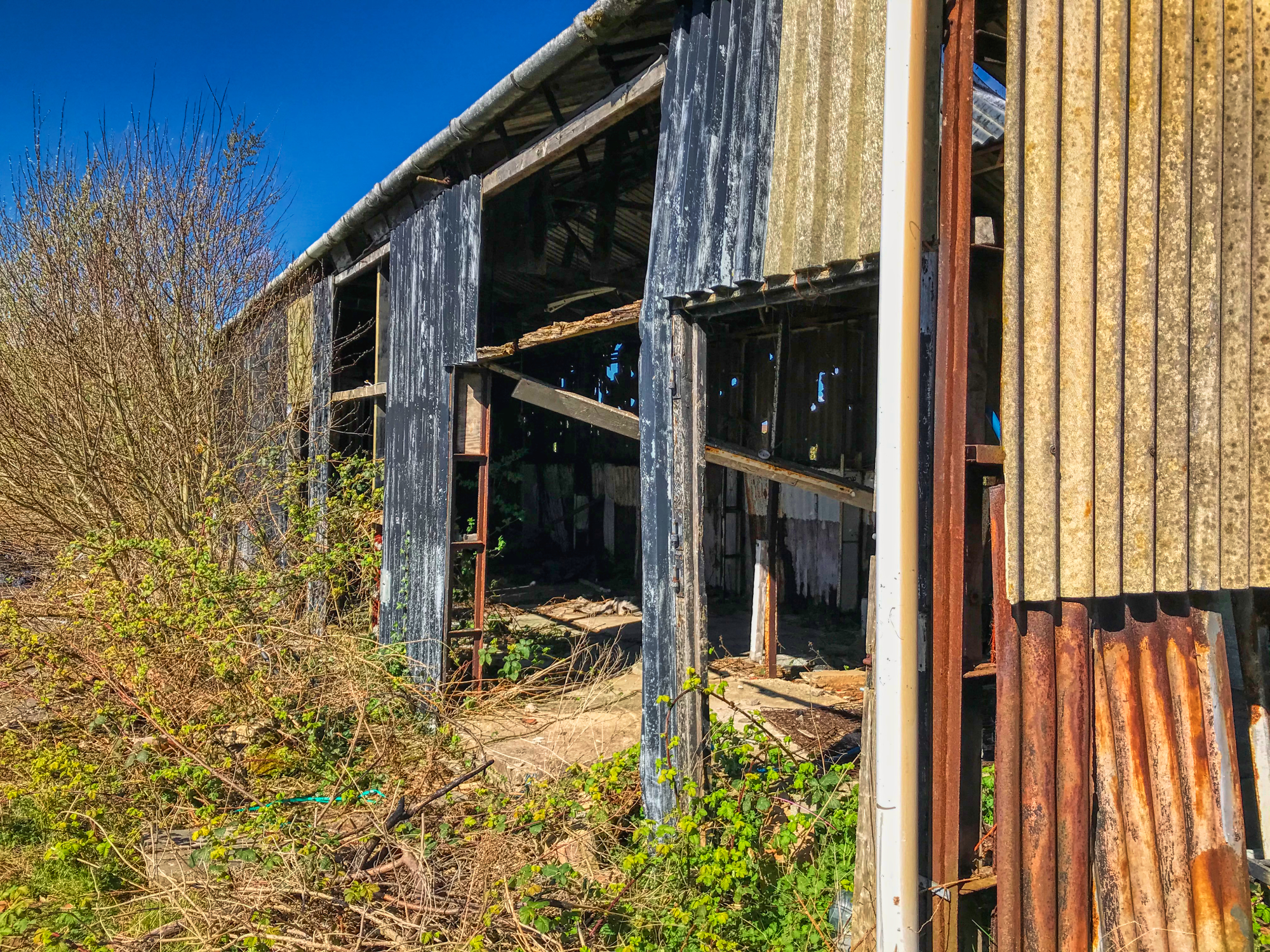 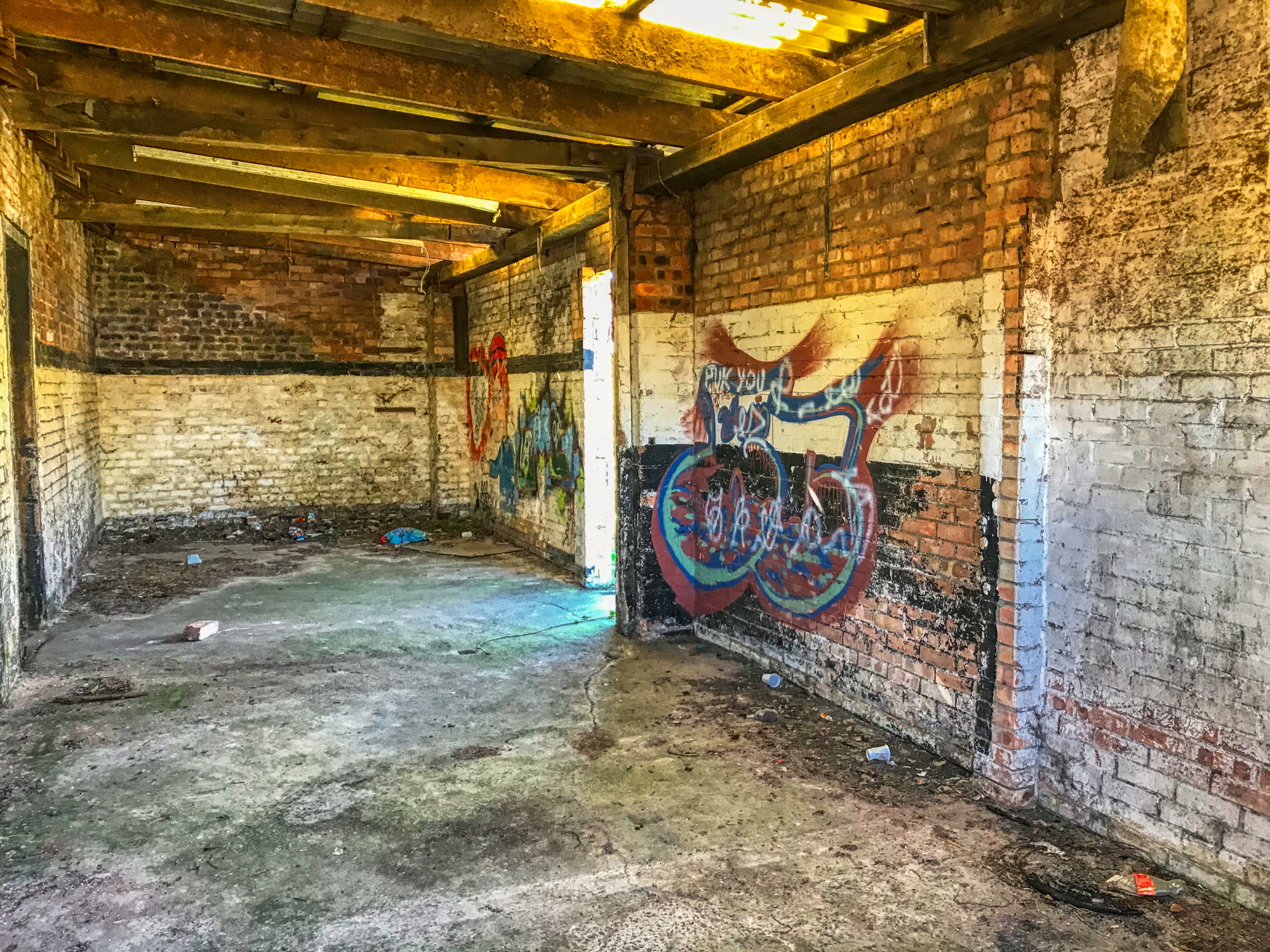 This was once some property with a barn around the back complete with average graffiti included in the deal. A terrible tragedy must have happened; I mean… it's almost new. We didn't hang around long thinking that some heavies were going to block my car in, tie us up and subject us to extended torture because we 'talked funny'.

We are not 'Scousers' and you need to be careful when playing away.

That amusement arcade does look like it's from a fallout game and Corinst Hall could almost be from Skyrim!

Nun's Vagina that made me lol 😃

Nun's Vagina that made me lol

One out of your book! That style of yours is sinking into my brain ever so slowly. Skyrim... it brings back memories. Wonder if it works at 4k 60kps. I just got myself a PS5.

A PS5, lovely. I have been toying with getting an Xbox X or S or whatever the new one is called. Hanging on a bit until some decent games come out

I need to play more. Did you ever finish that Outer Worlds? I might give it another go.

I did! I didn't get the DLC though and apparently that was quite good. Might get it, I have been hunting for a good game for a while

That cover image is gorgeous, did you edit that at all? Finest image of a dump I've seen all day.

I imagine it's pretty tight then, no loose ends, but I'll have to take your word for it. Ends was a last minute substitution for lips.

That cover image is gorgeous, did you edit that at all?

Just the usual filtering. No fake clouds.. the weather was getting a little dodgy.. this is the UK after all.

Those Karen's are everywhere, more so at weekends when the sun comes out. They tend to live opposite access points and bask out like slumbering mini beached whales on cheap deck chairs, only to open their eyes at just the wrong moment to give us a lecture. The boring bastards at cornist, they have replaced a climbable wall with spikes metal fencing!
When you venture up here next ping me for some pins, I think I have about 4-5 within 10 mile rad of there.

I bloody love fall out, have played the whole series

The spiky gate did look new and gleamed in the sun showing us just how spiky the edges were. It was the furthest out of all our pins that day and wasted a decent amount of time.

When you venture up here next ping me for some pins, I think I have about 4-5 within 10 mile rad of there.

I will take you up on that, though I have a ton to write up already. It's a case of saving them up for the winter, a bit like a hibernating hedgehog.

We did get in an old Cinema yesterday, so my claim of the curse is not entirely true. Trouble is.. it had been turned into a bloody hardware store inside. Sacrilege!

I bloody love fall out, have played the whole series

Did you try Fallout 76? The one that got all the bad reviews? I'm tempted to give it another go, it's sitting on my top shelf and it's taken them over a year to fix all the bugs. No 4k or 60FPS tho yet. I have my PS5 and want some toys to feed it now.

Ah forgot about that, no gave 76 a Miss after the bag of shit reviews, just waiting for Far Cry 6 in October. Well done on the 5, is it worth the money ? So many mixed opinions.

Back in the land of the face nappy now, and I know what you mean about write ups!

Yes, it's a lovely device and really fast. PS4 games are improved, the loading speeds are increased significantly. The PS4 is going to be sold nearer Xmas, I don't need it anymore.

Nice one, I may be tempted

@jacobtothe
about 1 year ago (Edited)

Man, do the proportions on this house bug me. It's fine to have a gable to one side, but two different kinds of dormer next to one another is a bad look. The proper dormer is way too close to the gable wall, and tries to hide how badly that lump of brickwork with the door integrates with the rest of the structure, while the pseudo-dormer looks like a completely unnecessary afterthought. Skylights in general are usually just a pain in the ass because they invariably leak, because cutting a giant hole in your roof is - get this - A BAD IDEA! 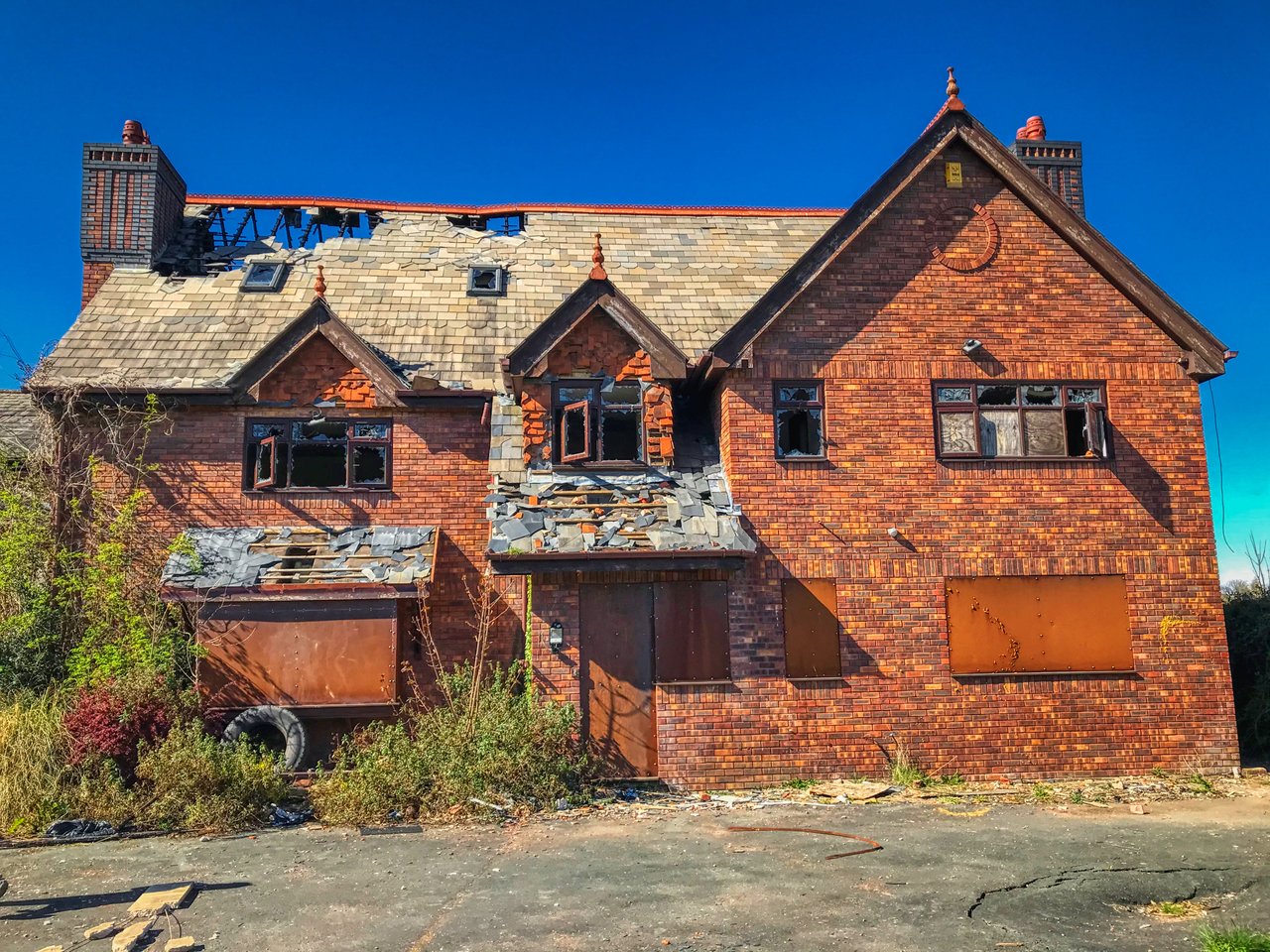 Maybe there's a good excuse. Sometimes oddities like this are a result of a home being built in stages over many decades. All too often. though, it's planned to be that bad from the start.

I did not know you had an architectural streak! Jumping on the old tyre and falling through that bad roof seemed a bad idea. Just to the left (off picture) were security cameras. You never know if they are working or not.

I have a background in drafting and design. I know just enough to be dangerous and pretentious.

You posted some beautiful old buildings. I hope they renovate the majority of them.

Oh, spiky gates? They are getting a little more aggressive in their quest to keep you delinquents out. I hate when they take all the fun away. I was really interested in seeing that first one and the one with the wall.

I am so intrigued! It is like a scorecard. Who is winning? How do you score?

These are so fun! Thanks for taking me along! Good luck on the next one!

There's been a certain Goontuber who scaled the scaffolding and got in Slotworld. I can't do this shit anymore, at my age!

The care home with the 12 foot wavering fencing. I was sure that was going to be a win. You never can tell until you get there. I have had to re-visit some places 3-4 times before I get in... like a certain Police station in Manchester!

Don't worry. He'll get your age too. I'm amazed that some last that long before someone finds a way in.