Hello hivers, I want to share a story with you titled BEYOND THE SCARS.

"A surgery is possible to correct the inadequacies" and this was the best News to my family and my sponsors. But to me? Well…

I had always lived with a disease that had no clear diagnosis. Everyone had tried a prescription and quite a number of tests to salvage the situation, but it was all to no avail. My family couldn't afford the luxurious hospital bills and we had to settle with the affordable health centers around us. 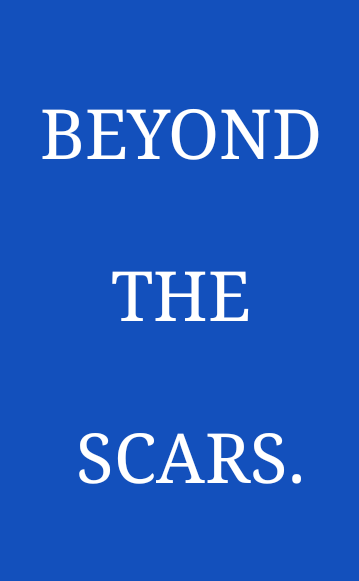 At one point, one of the help from medics went south, and I developed another disease entirely. I blamed it on the Nation failed health sector. My village people were not exempt either as I gave them a fair share of the blame.

Living all my life like a statue that can only be moved around by being lifted, I faced the pain and shame of the long stares and pity party in the society.

I wanted to be like my mates. I wanted to experience being a teenager in a grand style. Not only that, I wanted the coke figure some of my schoolmates were beginning to have, but my body said "no" and it locked me in from every possibility of moving around. Furthermore, I was enslaved in my body and it was obvious to everyone.

It was a scar that could not be hidden and I had prayed for the cup to pass me by, or a miracle, but it was far from reach and I had to hope from our little house that things would get better some day and like a miracle, it did after many years of waiting and getting worse by the years.

I had decided to hide indoors and keep my plight away from the eyes of all. I was tired of the unending advice, spite and the conclusion from some mothers who felt I was possessed and I was the one inflicting a strange disease on myself. Likewise, I had resigned to life's brutal fate, but the miracle came indoors searching for me.

"There's a Surgeon in another State that I would love you to meet. He is a Specialist and I trust His judgement. I'll shoulder the bills and every other financial need involved." It was a mix of joy and uncertainty for me.

The possibilities of being mobile again gave me joy. Being able to help myself with some personal activities and ultimately, being beautiful again. I had attached my beauty to my frail health and I felt I could never be beautiful except I'm healthy.

Also, the diseases had eaten up everything about me. It looked too complicated and, moreover, it had been there in my body for a long time. I had my reservations as we journeyed to the place of my supposed breakthrough.

After the test, we realized it could have been corrected at the initial stage, but at the moment, a little surgery could pave a way and it was the best test results ever to me.

Everything was put in place and the surgery commenced, but on the operating table, I had a strange feeling that the Surgeon was taking a risk. Like other Doctors, he really didn't know what was wrong with me, but he decided to give it a try and anyway, the bills were already paid and you know what they say about money answering all things?

I felt he wouldn't want to refund such a huge amount of money. Everything became blank until I eventually woke up to an oxygen tube fixed to my nostrils. I don't know how long it was since I passed out, but I felt again that the surgery wasn't successful.

A few weeks later, the Surgeon worked his way through the cast and despite the pain which he felt I shouldn't have at that time, I screamed as the flesh beneath the cast was revealed and for a moment, I forgot about the pain and became worried about the massive stitches.

I knew it would leave a huge scar when it eventually heals up and I really didn't want any of that. I had enough scars in my little time on earth that can last me till I'm old. My legs, my face, my back, my arms, everywhere had a scar, and now a massive scar on my hand. It just didn't sit well with me.

My whole World came crashing down and I could also see the fear in the Surgeon as he left another process to the Nurse on duty to handle. He wasn't pleased with himself for taking such a risk, but he tried to conceal it.

My ward mate noticed the changes in my mood. The ever smiling woman was not smiling, neither sad, but wore a straight face. My ward mate and her husband felt I should at least be grateful for the success of the surgery and if at all it wasn't 70% perfect, I should still maintain my joy, but that wasn't my problem.

The scar was and evidently, the supposed success marked the beginning of losing the use of my hand completely. The Surgeon said it would only be temporal, but he isn't sure either.

As I wept silently that cold night, I told God I really didn't want another scar. Not something this much. What would I do with a fixed hand that is immobile and filled with scars? Please, just take it away, and while I wept sour, "what would you show them as evidence?" asked a voice in my Spirit.

I really wanted better evidence. A beautiful one at that and then again, the story of Jesus popped up. His disciple, Thomas, said He wasn't Jesus and until He dipped His hand in those scars, Thomas found it difficult to believe it was the same Jesus who died 3days before that was standing there right before him with other brethren.

There would be people who would doubt your success story. They will doubt the possibility of what God has made of your life, but the scars will speak of itself. It will testify to others that God is faithful and He still keeps His promises of making us beautiful despite the scars.

Like Alessia Cara sang,
She don't see her perfect
She don't understand she's worth it
Or that beauty goes deeper than the surface…There's a hope that's waiting for you in the dark
You should know you're beautiful just the way you are
And you don't have to change a thing
The world could change its heart
No scars to your beautiful
We're stars and we're beautiful

There are scars that shouldn't be hidden. It makes us beautiful. It tells our story. You might not be "perfect" like everyone else, but you are your kind of beautiful. Stop hiding your scars. Stop trying to change the situation. Go with the flow and let each passing day and experience be a ladder to growth to a better you.

Let beauty exhume from those places that you have felt so imperfect. This is possible when you don't judge yourself by what you see in others, what you hear others say or do. Be your kind of unique and recognize that there's surely scars that adds to your beauty. You can change narratives and change the World's perspective towards your situation.*

Always remember that there's no better you than you are, and you are a star. There's no scar in you, but a star shining bright in you, making you beautiful and lighting the path of others too. Let them see the evidence.

There's so much more to share, but I hope this little shines hope to your heart. There's a back story to the disease. What would you do if whom your parents entrusted your care to messed up your life until you become sick, broken, disabled and scared?