Let me start with the development of the key performance indicators, which I will further breakdown in the rest of the report. 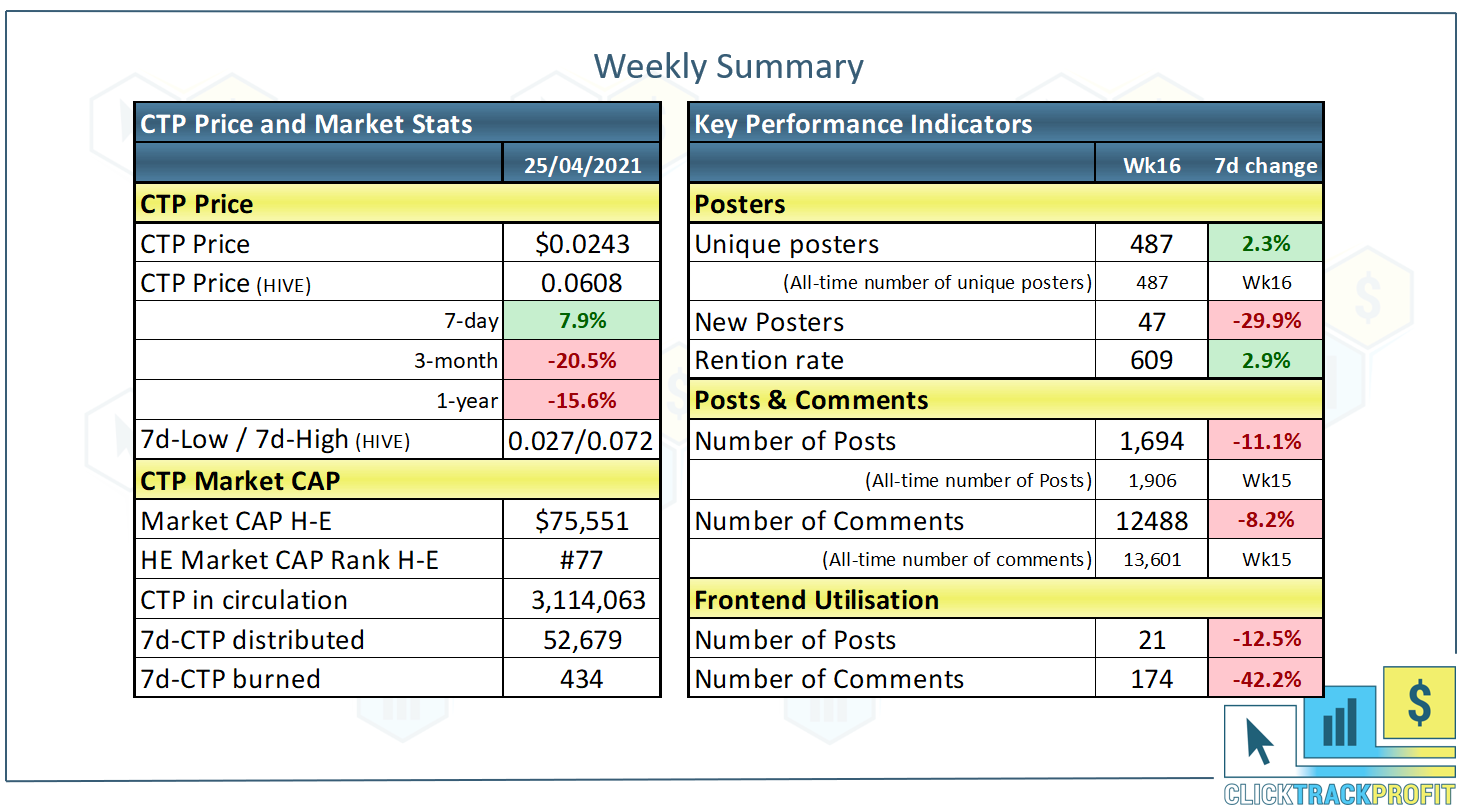 The first section contains the daily posts and earnings in week 16. During this week, 487 (+2.3%) unique authors published 1,694 (-11.1%) posts and generated 22,432 CTP in earnings. The first chart below presents the number of posts published per day. In the past weeks, the number of unique authors kept growing with 5.3 authors weekly although we see a clear slowdown since the beginning of April. Also the number of posts increased with 6.7 posts weekly but again here we see a similar slowdown. The next two charts present the top post authors and earners in week 16. Looking at the overall trend, the number of new authors is further increasing with 0.2 authors weekly. As a result, the total number of CTP Talk authors has now reached 1,855. The 14-days retention rate (which provides an indication of CTP Swarm engagement, interest, and loyalty) has reached 609 authors and is still advancing. This week we had 12,488 comments in total, it is a bit less than last week but still moving in an upward trend. In the chart below you will see the steady increase in CTP post comments. On the other hand, the comment upvote value decreased again this week to 1,254 CTP. The frontend was used substantial less as compared to last week. With the new frontend under development, I would expect this number to increase substantially. The first one providing an overview of the total CTP supply, the number of tokens staked, liquid and burned. The total amount of CTP in circulation is held by 3,112 (+2.2%) account holders, which is steadily increasing. The next chart presents the TOP 20 CTP holders. During the week, @lisamgentile1961, @rcaine and @howyf2 passed @bradleyarrow in the chart. The following chart is taken from Hive Engine and presents the price development in the last three months. As you can see there has been a steady decline in price after the peak mid-February. On the positive side, the price has stabilised at the end of March and is slowly increasing again. I had no idea that I am a top CTP author. I usually tag CTP because I post related articles and I wish I would come on the CTP front-end to post, but my physical energy is low.
Thank you for the mention. It is a self-note for me to come and post more here!

Thanks @regenerette, I think CTP is an awesome tribe with responsive people so feel free to contribute here.

Thank you so much!

@hirohurl
about 1 year ago

Thank you, I have followed you back.Congrats on your CTP staking!

And I seconded that motion! Following :) 💚

I am still amazed that more people are not posting and commenting using the CTP frontend. With the engagement initiative that @amr008 has going, it is monetarily advantageous to do so.

I agree @moonthumb and when the new frontend will be launched, it will be even better.

Awesome. I'd love to see stats on other tokens.

Glad you appreciate my CTP stats @ciffagreen. If there is anything to add let me know.

I imagine these numbers will really start to take off when the new front end launches. It made a significant difference to LeoFinance when their went live.

I fully agree with your comment @curatorcat.leo. The current frontend is really basic and limited in use. Besides, CTP Talk stands for marketing and entrepreneurship where you would expect to have a funky frontend to support the development in these area. :-)

Am glad my name appeared, although am still new and doesn't really understand this platform but I hope with time I will learn

I'm sure you will catch-up @kaymatt and feel free to ask any questions. You can join us also on Discord where the interaction is a bit easier.

Can I have the discord link please ,😁😁

@hirohurl
about 1 year ago

Thanks for posting another comprehensive review of CTP stats. Appreciated.

Thanks @hirohurl. All to help CTP Talk grow by sharing the positive developments in the charts. :-)

Thank you for your welcome.

Thanks so much am happy seeing my name mentioned thank you so much @pjansen.ctp for this am honored 🙇

Really great that you have joined CTP Talk. We have a lot of awesome people in the swarm and you can visit our Discord channel as well in case you need further support.

Yay! Everyone is doing a fantastic job (as always). I am pleased to be a CTP Talk poster. It is a great platform for branding & improving yourself! :)

Thanks for the stats & the work you put into them! :) Have a great weekend.

I fully agree @pixiepost, CTP Talk is a fantastic tribe. I hope my stats provide insights for the community to focus and grow even faster.
Have a great start of the week... :-)