Threads is launched, and I am pretty hyped about it!

@pele23
about 2 months ago
LeoFinance

Since yesterday evening the "Twitter" form of Leofinance.io has launched, called Threads. Where you can post a small quote, or newsitem or anything you wanted to share to this world in 240 characters. Pretty amazing, and you can react very easily too. It enables a very vivid action on Leofinance, with a lot of topics being discussed in a fast way. Where you can leave a small opinion or comment. Just like it is on Twitter, but without the bullshit. I like it very much, and have read very interesting things about a lot of different topics and reactions from people I didn't know before Threads existed. 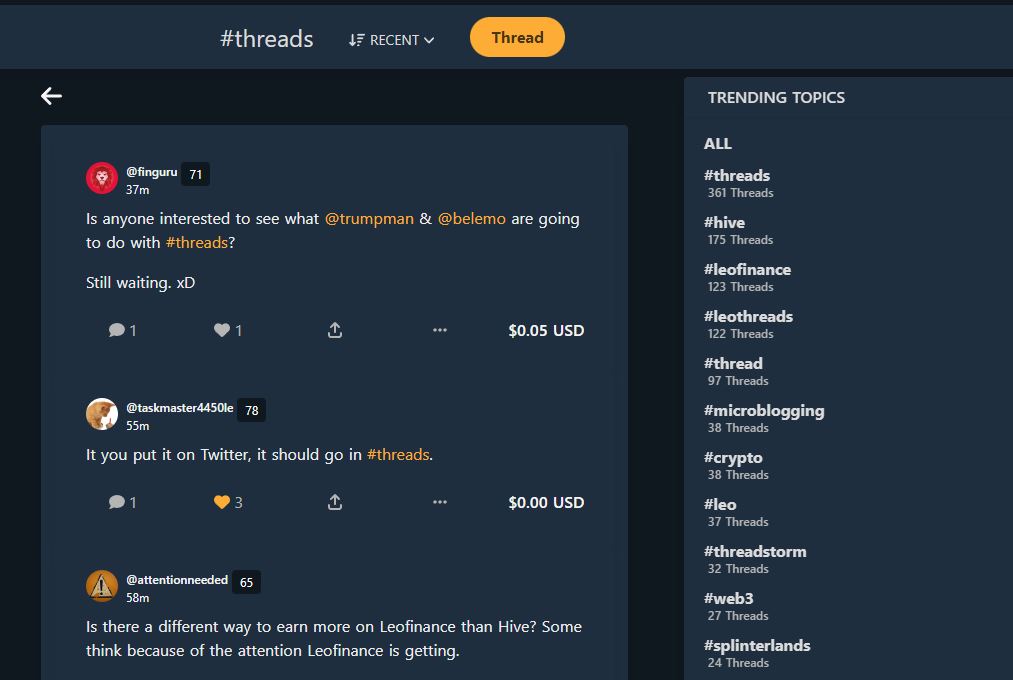 This will definitely have its impact on the economics of Leofinance. How many rewards will go to these posts in threads? Nobody really knows right now? But what I do know, is that it will expand the community very vastly fast. Lots of people will post something they wanted to share, they otherwise wouldn't as it would be considered shitposting. So, there will be a lot more action on the blockchain and a big bunch of people will make new connections to members they hadn't even heard about. It is an amazing feature, as simple as it is!

Sometimes you can try to reïnvent the wheel, but maybe it is better to take what is already out there, tweak it to your needs, and make use of it. That is exactly what happened here, and it will change Leo forever. @khaleelkazi will see a shitload of threads being started, and he will love it. That is for sure.

See you on Threads!

@dwayne16
about 2 months ago

Threads is already having impact on engagement and means for people to promote their content. This is definitely a banger

@solymi
about 2 months ago

I love the threads! Now I only go to twitter to shill the news to the normies !PGM

It's a place for short-form content and I think it has the ability to attract a lot more people. At the same time, it won't be bothering people's feed too.