The US Dollar is going to leave the EURO way behind...

As we are all into crypto currencies over here, we sometimes forget to look what is going on on the Forex markets. And I must tell you, a lot has happened in the last few months. The actions of the Federal Reserve, by raising the interest rates, have made the Dollar a lot stronger compared to the Euro. That is also due to the standstill at the European Central Bank, where the first rate hike is planned for next Thursday. And that rate hike will only diminish the negative deposit rates at the ECB. So, in fact after this hike, the real interest rate will still remain near zero.

These very different approaches have made the Euro drop from 1.22 USD to parity right now, in a matter of months. That means that the Euro has lost more than 1/5th of its value against the greenback in about 5 months. That kind of decline is unseen. And is in my opinion deliberate by the European Union. The want a weak Euro, to make export cheaper. Just like Donald Trump wanted a weak Dollar when he was president. The only difference is, the United States of America have a lot more goods to export than the European Union. Over here, the biggest part of the economie is the service sector. Which has no real impact on the export side. So, the weak Euro will have effect on export, but the total effect will be minimal. As we are just too small producers, the make a significant difference. 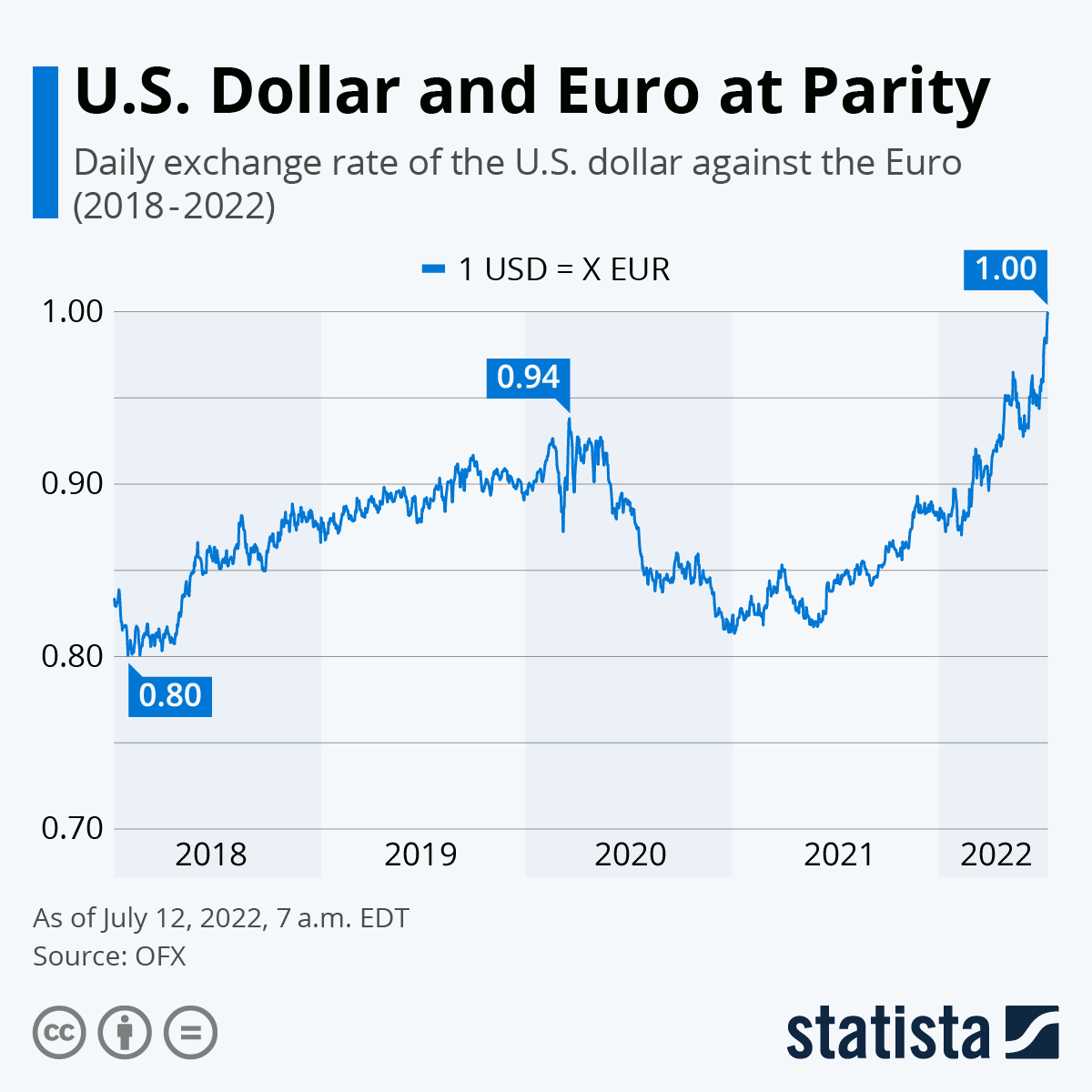 In the next few months, I expect the US Dollar to rise even more against the Euro, meby even to 0.85 USD per EUR. Which will make export from Amerika to Europe very expensive, especially, when it comes to oil and gas, which we don't take from Russia anymore. This will rise inflation in Europe even higher than it is, now.

In the long ron, this could become a good thing for Europe, but in the short run, hard times are coming for Average Joe here in Europe. Oil and gas prices will keep n rising, and that way keep inflation high. Once the supply chain issues get solved more or less, the Euro can start raising again. As everything from ovr here will become incredibly cheap.

As for european Hive stakeholders, this is great tho happen, as my porfolio of Crypto and Hive is measured in Dollars, so the value of my account has remained quite stable despite the bear market. Interesting times, and in my opion times to get invested strongly.

Have a great Wednesday,

I guess it's time I should dump more euros into crypto...

That could be a good idea…

Despite the 9.1% inflation of dollars, Euro will still be left behind, all thanks to their renewable energy.

Well yeah, the green agenda is killing us indeed. Sad part is, the European Commission keeps pushing it…

A couple reasons for that:

That all equates to the EURO being gone by the end of this decade.

I wouldn’t go that far, but the Euro is definitely going to see some tough years

The strong $ is messing with our poor South African Rand!!

It was bound to happen. The faith in the EURO has dropped ever since they pulled interest rates negative. The USD still hasn't done that so it has complete faith.