Are stablecoins deliberately being attacked by big players?

We all know what happened to Terra(Luna) and USTerra this week. What not everyone realises is that this was a very well played attack by the consortium of BlackRock and Citadel. BlackRock being one of the biggest financial institutions in the world is no surprise with this. Is this done deliberately to destabilize crypto in general? I asked myself the question when the sources came out with the names of BlackRock and Citadel. This could very well be the start of an attack against crypto as a whole. Or maybe it was just a hit and run...

But than I saw the chart of USDT today. And I spotted something that is very strange. For a brief moment USD Tether dipped to 0.95 USD. And then it went back up again, to slowly regain its peg with the Dollar. I checked the all time history of USDT, and this has not happened since 2017. There have been a few dips, but never this deep. So, the question here is, again. Was this another attack? Was this done by the same players, and are they using stablecoins as victims for their agenda to destabilise crypto currencies? I hope not, but I truly fear so. 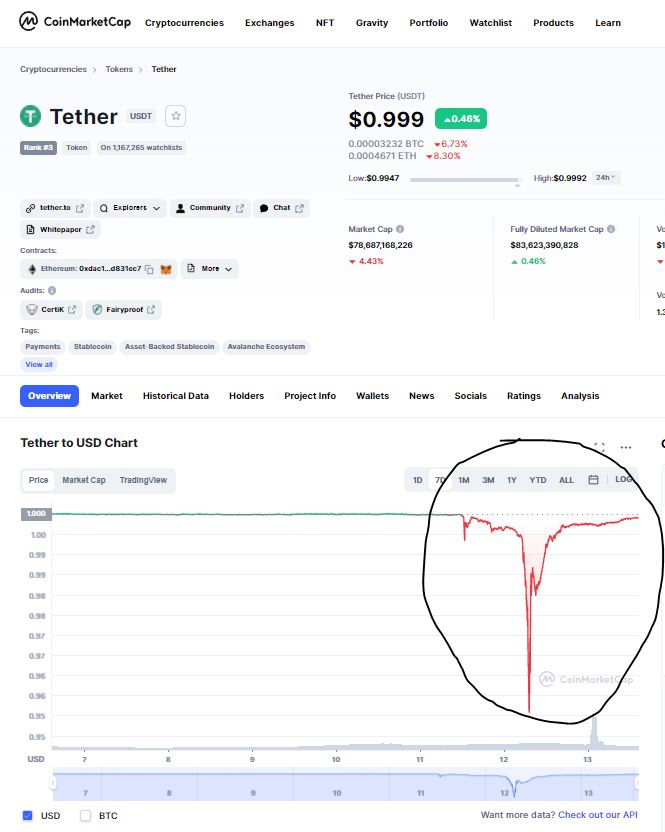 USDT is a lot more capitalized than UST, so it won't be that easy to break the peg, but still, with players like BlackRock, money is not an issue to try their best at it. I really hope I am wrong here, and I am seeing ghosts. But I must say, this chart scared me. And a lot more than with what happened with USTerra. An overthrowing of USD Tether would cause turmoil that would make the last week look like a summer breeze.

Stay away from stablecoins, and stick to HBD

My lesson with this is, I will stay away from stablecoins in the next few weeks, and will stick to HBD, which has a completely different mechanism than the ones above. And I can't imagine HBD being a possible victim of such players, as there is very little money to be made with it, compared to what happened with USTerra.

Have a great weekend, and be careful!

@gangstalking
5 months ago
Whoever is directly controlling the V2K told me to kill myself.
They told me if I killed myself now it would save the lives of countless others.
Saying the longer I wait to kill myself the more people will suffer.
They are reckless and should have shown the proper media what they had before taking me hostage for 5 years. I know there are many in prison that dont deserve to be there because of this. Your stay in prison will not be fun @battleaxe and friends. People are going to want you dead when they find out what you did. I hope you die a slow painful death. You sick mother fuckers.

To be honest, I don't think Tether will crash like UST, if that happens, all the crypto market will go down to numbers we can't imagine.

Still HBD is a good option as well

Well it would take a shitload of money to try and sink Tether, but firms like BlackRock have that kind of cash. If they want to, they can…

Tether is a scam.

Could be a scam, but it will very hard to crash it, most of the market depends on it

They claim to back it up with dollars in a bank account, everything that depends on or are connected to fiat money is a scam in my view!

This event damaged the concept of stablecoin. What we know as stable might not be stable. Good that I only have HBD as a stable coin.

Have your money in the best: #LASSECASH #HEX #HEDRON #PULSE #PULSEX #LIQUIDLOANS

It is not out of the realm of possibility. We need to be mindful of what we are dealing with and the resources they have.

For this reason, we need to keep building and expanding. You are right, HBD is under the radar and the best place for it.

I read somewhere that BlackRock is behind USDC, so it could be a real thing to extinguish the competition. But they would eradicate all trust in stable coins with it…

BlackRock basically is the Illuminati

HBD seems very solid, but its better to have your money in the best: #LASSECASH #HEX #HEDRON #PULSE #PULSEX #LIQUIDLOANS

"Stay away from stablecoins, and stick to HBD"

first time hearing those names will have to read up on it...

We have some weeks ahead of us as we get to know more about the Luna, UST crash.

I never invested in luna or UST, it always seems inferior or scammy to me... buy the best: #LASSECASH #HEX #HEDRON #PULSE #PULSEX #LIQUIDLOANS

Just other names for Illuminati.. if it is fiat money BS connected to centralbanks, it is controlled by the Illuminati!! simple as that...

I guess it would be time we should "act crypto" and no longer rely that much on stablecoins. These are useful solely for trading. If crypto would be used as intended we wouldn't need stablecoins.

Uh oh. for sure it might be the rich old boys trying to pull down crypto, or maybe just a hit and run to make some quick money, but I think crypto is much too big to be stopped now..

While they are getting attacked, I don't think HBD will have enough liquidity for everyone coming in so it's not a very good alternative right now.

There is a huge downward spike in price but no spike is volume. That's strange. Could this be a simple outage in a huge exchange or bridge?