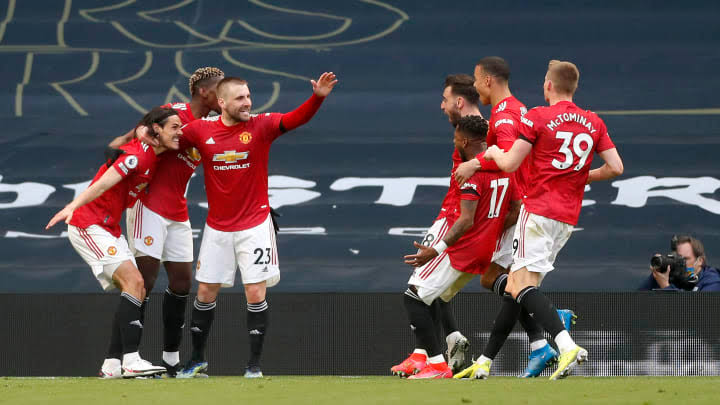 Jose Mourinho met with Manchester United again and he would be willing to get one over his former side again.

Both teams met with their 50th game of the season as Tottenham hosted Manchester United that they thrashed 6-1 earlier in the season. It is understandable why both would want to play with caution.

In the 16th minute, Pogba was found with a long pass. He brilliantly headed the ball down for Edison Cavani who laid the pass into the path of Rashford. He tried to score with a shot but his effort was blocked off for a corner kick.

In the 21st minute, Lucas Moura tried to find Son in the box but Henderson, who made his 5 League start easily gathered the effort.

United got the lead in the 34th minute with a brilliant move from McTominay who found Fred. Fred in turn found Pogba and Pogba expertly laid the pass to Cavani who wasted no time in slotting the ball in between the legs of the goalkeeper into the net. Son made a meal of the touch to the face and stayed on the ground for a long time before the referee checked the VAR and overturned the goal. It was obvious McTominay was trying to block off his touch when he dragged McTominay's shirt.

In the 40th minute, Son found the back of the net after Lucas Moura squared the ball to him after Lindelof failed to clear the ball before it went to Lucas and Son slotted it home to take the lead and have his 14th goal of the season. Cavani was infuriated with that decision to rule off his goal.

In the 47th minute, Fernandes tried to pick out Cavani but the ball was a little too high for him and he couldn't get a clear header on the ball. That would have been a lovely goal.

The first half ended with aggrieved Manchester United players still questioning the decision of the referee to rule off the goal.

In the 52nd minute, Pogba and Cavani's link-up play came up again when Pogba tried to find Cavani in the box but the effort was blocked off for a corner kick. United started bombarding Tottenham with a series of attack coming from the wing-backs but nothing came out of it at this point.

Not to be denied for long, Fred got his first goal for almost 2 and half years in the 58th minute when he exchanged passes with almost everyone at the edge of the box before Cavani had his shot saved and his follow-through gave him the goal as he roofed it to the top of the net to draw United level, 1-1.

Henderson denied Tottenham with his feet in the 60th minute when Son had a shot hard and low. It was a timely intervention for him to deny him the second goal of the evening. On the other end, Fernandes should have given United the lead in the 63rd minute but for Lloris who expertly saved the amazing strike from the Portuguese.

Pogba should have given United another lead in the 67th minute when a Luke Shaw ball found Bruno Fernandes. He somewhat gave it to Pogba who adjusted his body and tried a cheeky attempt at goal which didn't pay off. Another let-off for Spurs there.

Harry Kane drew a brilliant save from Henderson after twisting Wan Bissaka at the side of the post and got a corner kick instead. Mason Greenwood who came in to replace Marcus Rashford tried a shot from a long-range and also a tight angle but it didn't threaten the goalkeeper a bit.

Cavani finally got his goal in the 79th minute when Greenwood played the ball into the box. He expertly headed the ball in the opposite direction the goalkeeper was coming from. Brilliant delivery, brilliant header, 2-1 in favour of United.

Pogba who has been exceptional in the second half brilliantly produced lovely footwork to set free Greenwood who drove a bit in and unleashed a thunderous shot that flew in from the side of Lloris in the 95th minute to all but seals the 3 points for United. They have gained 28 points from losing positions this season. What a brilliant away form they have been on. 23 away unbeaten games.