Short Anecdote From My Dating Days #2

@nevies
about 1 year ago
Proof of Brain

You know that stuff that girls do when they like you but don't want to tell you? That stuff where they'd be sending signals and traffic signs your way for you to get the hint that they like you? Aha! That stuff.

I hate that stuff. But there was a time I didn't hate it. That time, I used to pride myself on being able to read signals from girls, interpret them perfectly and act on em. This story happened back then.

I was still a young teenager then. What happened was, I went to visit an uncle of mine in another city. I was going to stay with him for about two weeks. So while I was there, there was this girl living some doors away. This girl was always staring at me anytime she saw me. I'd always turn to catch her gaze, and she'd take her eyes off immediately.

Well, I couldn't blame her though, you know, I'm a very good looking young man. I could swear she liked me and was tripping all over, that was what all her staring was for, it is there in the Unwritten Guide to Understanding Female Sign Language.

One day, my uncle was not around, and whoever lived with this girl was not around too. She was home alone like me. Then I looked out of my window and saw this girl sitting in front of my own house. She had left her own side of the vicinity to come to mine. This was known as 'Setting Up', it is also there in the Unwritten Guide, it is the move carried out by the female where she comes to stick around or stay close to you and give you the opportunity to start a conversation/friendship/marriage/fuck-buddyship.

On seeing this set-up it was clear what I needed to do. So I kitted up, combed my hair, pushed my eyebrows into position, winked at the mirror and swaggered my way to lil shawthy. 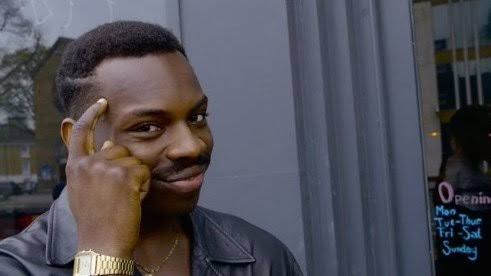 On getting outside, she greets me, I smile and ask her what her name was. She replies that she doesn't have a name. I laughed, and thought that was a good attempt at a joke, this girl seemed like she wouldn't leave all the day's entertainment to me and that's dope. But I looked and saw she didn't join in the laughter nor even smile. TF?

I gather myself together and ask her her name again. She frowns and tell me I should leave her alone. I was confused, my brain quickly searched the Unwritten Guide and came up with dead ends. I asked 'seriously?' She replies angrily and louder 'yes! Leave me alone!'

Whoa, I didn't know what to make of the whole thing. Plus I was angry, because I'm the fucking Fresh Prince! And I'd thought this girl was trying to be my friend. Like, look, this girl was always staring at me, and now she leaves her house to come sit in front of my house when she knows that I'm home alone, what light could be greener than that?

I walked back into the house, people. I'm telling you, and I never tried to talk to that girl again till I left that city.

I think it was this moment that was one of the things that led me to the realization that these female greenlights were a poor and childish means of communication and that the Unwritten Guide was bullshit because why should we need manuals to understand each other when we can speak? Females should say what they want and become known for saying what they want rather than needing to be decoded.

Right now I know too much about all these matters, I know signs from women is due to patriarchy, patriarchy meant a woman had to wait for a man, etc. (I talked more about it here). I probably shouldn't complain because the world is already headed in the direction of freedom where women are free to want men and tell men they want them. Freedom, where women don't have to wait on the man because she's free to make it clear what she wants. In this free world we're gravitating towards women no longer need to communicate with signs and men won't need to walk with Unwritten Manuals in their heads.

@tobetada
about 1 year ago

Thanks a lot @tobetada😃

@tobetada
about 1 year ago