It was another bad end Barcelona in the league last night as they suffer another defeat in just 6 days again, haven't lost Thier trust two matches in th champions league to Bayern Munich and another to Benfica on Wednesday,the show of defeat continue at the hand of Atletico Madrid too.it was another show of former employee as Luiz suarez find it easy against his former employee to put the game to bed in the first half. 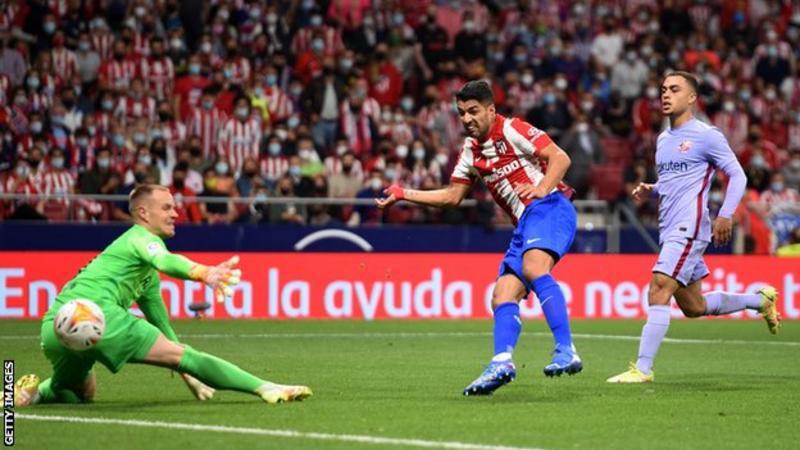 The Uruguay international refused to celebrate after he as team up Lemar to score the first goal and even having himself too on the scoreboard too last night,he rather pressed his hands together as a symbol of asking for putting the game to bed with his first goal against his for employee on Saturday

Suarez hit late in the first half to put the Madrid side 2-0 up at half time show to put more pressure on the struggling Catalans before the break,which later turn out to be the final score for the day, regardless of the scoreline and contribution during the match he remain respectful to the Barcelona side refusing to celebrate his goal last night.

Suarez who as been unable to play well enough against his former employee was robbed of a chance to play against them in the first league last season,before he drew blank in may during the second leg which ended in draw between the two teams as Atletico won the league last season

This time though ,he was was on target as he picked up a very good pass from Thomas Lemar,who had open the score at the wanda metropolitano stadium and firing the ball to the net to double Thier lead and put more misery on barcelona team

Suarez refused to jubilate after his strike ,but instead offer a gesture that comes with contrition towards the barcelona fan, having used six trophy-laden years at the Camp Nou stadium before his move,he gesture though might stir up something after the forward was reported not needed by Koeman which eventually led to his move to Atletico Madrid.

Suarez who is regarded as one of the deadliest strikers across the world is still very much dangerous in front not goals and even at 34 years of age,the player who has won the European golden boot twice in his career ii still very much in the lime light,he as also achieved a personal records in Spain which as seen him scored against all the 31 opponent be has faced in the league having 172 goals in total and scoring against his formerly side his is first time in two appearance

He as successfully managed four strike in the league so far and he also netted against AC Milan to ensure a win for the Italian in the champions league during the week,he as now maintain a personal best of scoring against every la-liga opponent he has come against with Barcelona the latest and the 31st viticim in the last seven (7) years.

On the other side Barcelona as been struggling since star man loniel Messi as left the club leaving them with low performance inside and outside the league,with the lose at Madrid they are nineth on the table with just 12 point having a game at hand.it is now looking so rough for the likes of Memphis Depay and others as the task at hand at the Camp Nou stadium is now looking so far beyond them right now.

prior to this , Barcelona had three wins and three draws and back to back thrashing in the champions league making it a hard job for Ronald Koeman right now

Barca also had some chances too on Saturday during the match,especially when the game was still at 1:0 with Coutinho effort just wide and de Jong just inches from converting from close range following departs header towards gaol

It's a very big pity seeing Barcelona easily beaten by teams recently, I just hope they pick up their form and start winning once again

Definitely mate, they are currently having a poor run of form,but I wouldn't want to say the departure of Messi is behind all this

You gatta say it as you see it, Bro.
The departure of Messi surely has a negative effect on the team.

Congratulations @lordemmy! You have completed the following achievement on the Hive blockchain and have been rewarded with new badge(s) :

Getty Images I am afraid and you need to be ore careful. It is even written on the photograph so shows how you never even checked. Cannot be curated for this reason and have thrown $$$ away.

That is why thier is picture source on it,,come to think of it what is the essence of picture source attached to it ,it is now looking like getting it hard to understand right now,,come tell me why are picture source included,I thought it is to show that the picture was gotten from a source which is not mine

NO. Getty is banned for any of us to use and you used Getty straight out. Getty control 99% of all football photographs. Until you learn that you will get 0. In the past posts were downvoted for that and it could come back as it should be all the time.

Is their anywhere this was stated as part of the rule, please share me ,I will love to read cause I hate people coming to make me feel as if am not doing well enough even at my Best

Always been the case and is a common fact. If you took the time to understand I am trying to help you. I have taken time to explain everything to you and you have tried to come across as clever. I have more important things to do and you need to learn. Use Getty images by all means as they have prosecuted people in the past for copyright. What you don't understand is you are earning rewards no matter how much they are by using their material. I cannot let you use them and will downvote if I see any in the future.

If you don't add a picture source then you are telling everyone you took that picture and were at the game. Don't have to get clever about it as you will just lose out earning nothing.

Suarez is the Karma against Koeman that with the goals of the Uruguayan it is possible that the DT will be fired.