@lebah
about 1 year ago (Edited)
Proof of Brain

There are many users who worry about POB price. The bear of the POB price may reduce motivation for authors and users. Some authors use the POB hashtag only. They are not loyal authors that commit to the growth of this community. They are also not investors in POB. When they earn POB, they will sell them directly to the market. 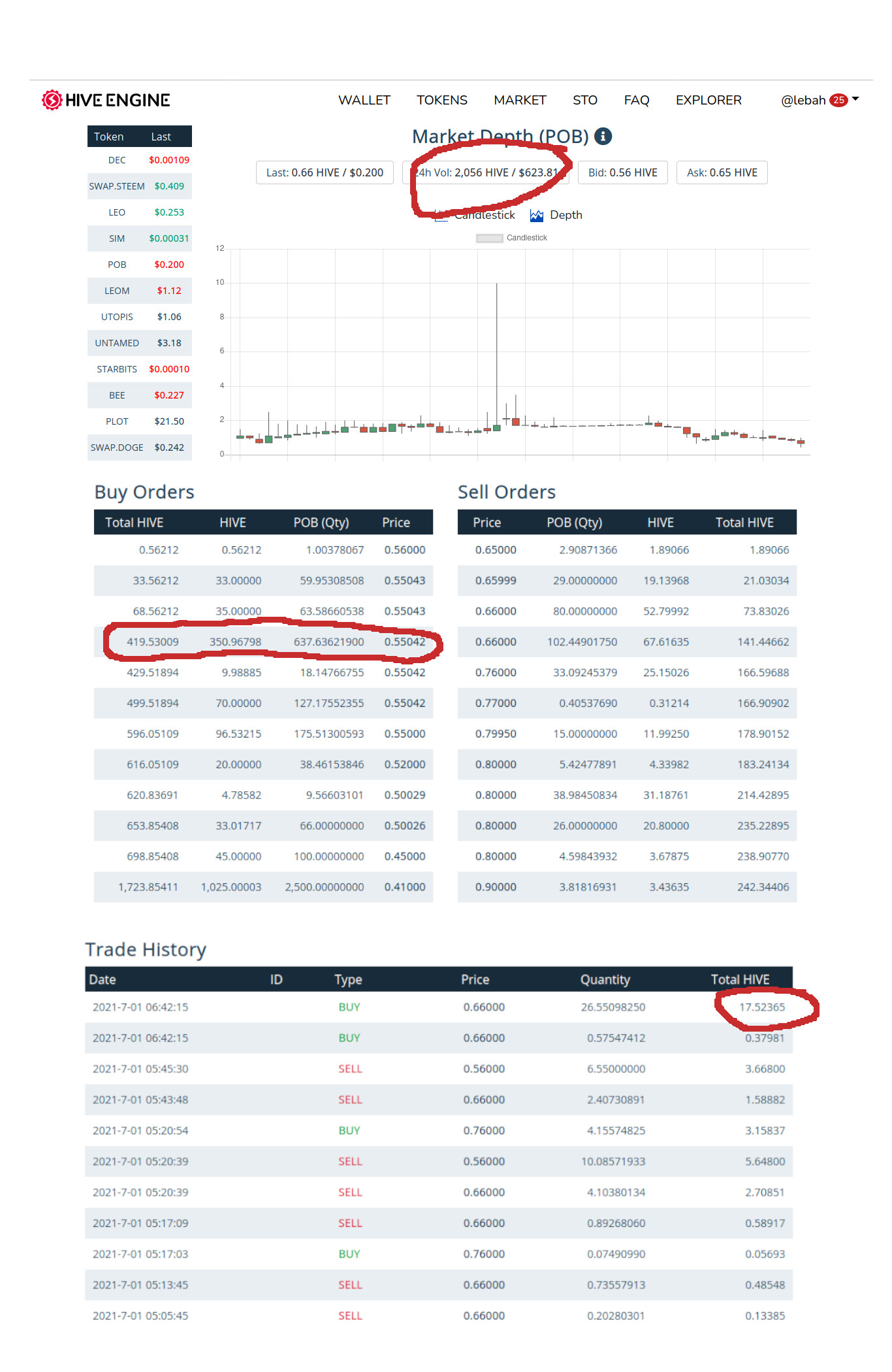 As you can see in the POB trading history. A small number of POBs are involved in the transactions.It means the trading history is in small value. There have been no large account activities in the last few days that have bought or sold POB in large quantities.
The trading volume of POB is still on the top chart. Today's total vloume was 2,065 hive. Because of the low price of the hive, the POB value is $0.200 .

Will POB continue to be dumped?

From the chart, in my opinion, the price of POB will still be lower because there are no whales that bid POB in high price.

Based on past experience, the rise in POB prices could be short-lived.I think there will be more investors that are ready to buy POB in bulk once the price stays at the lowest level. In the coming days, the lowest level will be around 0.5 hive.

To stimulate prices, I believe a POB power up day contest should be held.The contest will reward POB liquid or delegation. This contest is to motivate low POB shareholders to increase their power assets.

Leo is a strong community. Leo's investors are not only on Hive, but also on other networks such as ETH and BSC.POB is too young when we compare with LEO.

I think we should have POB stake July. For all the Month of July we should encourage everyone to stake all their rewards which will definitely boost the community. We really need this contest, that way we can see who are really committed to the POB community. Please have a look at it dear POB curators.

There should be POB power up contest. Starting this July, I hope there will be a curator who will host the contest.

It is a long game. If sellers want to sell and tank the price, that is fine by me... I might even start buying soon. with almost 90% staked, we are dealing with just small liquid amounts. But if there is more sellers than buyers, it will go down. There are a lot of people with a POB side hustle that are selling into other things. It won't last as there will be support. This tribe is really untested as far as market volatility is concerned... a bumpy ride is good for POB. I wasn't planning on selling anyway!

if there is more sellers than buyers, it will go down

On the lists of selling offer, there are only small sellers but when the tokens are accumulated, the price will be dumped.

Have once said this on a post that one of the dangerous and uncommitted attitude is author's posting for rewards which I want to believe is one of the major reason that is affecting the price of Pob recently,cause many do it not for the interest of the community,but their pocket and that is why the level of investor's or Pob staked as reduce of recent,I strongly believe that we should buy a better future for POB cause it will be of benefit to us just like Leo is doing fine with lot of investor's investing their rewards

uncommitted attitude is author's posting for rewards which I want to believe is one of the major reason that is affecting the price of Pob recently.

I agree. Although, the authors are very popular, if they do not have commitment to the POB development, I think the whales should think twice to upvote.

https://twitter.com/ahmadfz1/status/1411021363016613898
The rewards earned on this comment will go directly to the person sharing the post on Twitter as long as they are registered with @poshtoken.