Lasse Ehlers banned from STPLN for no reason 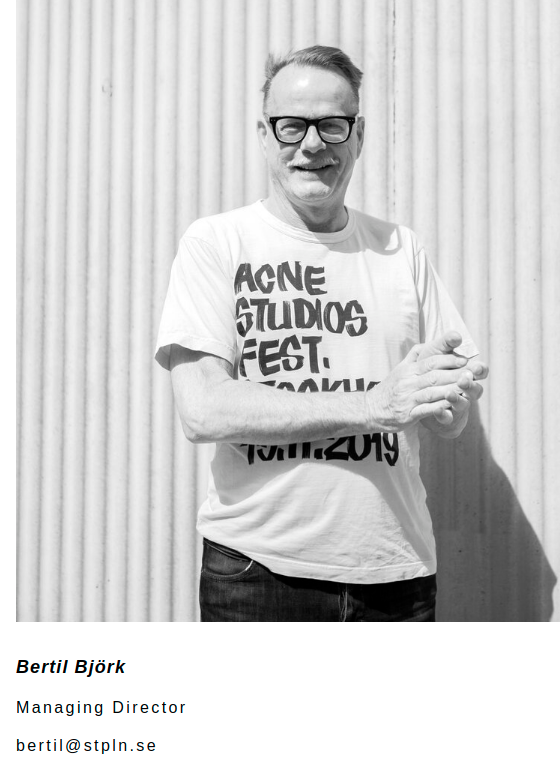 So back in 2015, I was living in my old apartment again in Malmö, Sweden and at one point I was looking for an office space. I googled it and found a free office space called STPLN, it was funded by the "Malmö stad" as far as I understood.

Back then I was in a completely other situation then today, here 6 years later. But I began using that office space and for the most part I liked it. I don't remember how long of a period it was, maybe 3-6 months, I got to know some of the people there a little. In particular one girl liked cryptocurrency and it was fun to talk with her about it. Coinciding with that I began working in a job in Copenhagen (still living in Malmö), I got a email from Bertil Björk, who took over as the "leader" of the place after a Swedish woman. I dont know any of them, I remember being busy in the office and Bertil was trying to talk with me, it was not to be rude, I was simply too busy to talk with the older man, who I didnt know would be the leader of the place later in the future.

Maybe this, that I didnt have time to talk with him, was the reason for him banning me later at the place? I dont know. I know that when I got his email, I was busy working in Copenhagen and didnt think much of it at the time.

While being at the STPLN, we talked about the possibility of making some sort of presentation of my story with cryptocurrency and this was something I gave a little thoughts later and one of the reason the "ban of me" was a problem. Thats part of the reason I wrote Bertil Björk to ask for deleting the ban, I mean it didnt make sense to me in the first place. I mean I absolutely have not done anybody anything at that place or anywhere else, so why the ban in the first place?

Anyway Bertil answered after some time, came with no reason, but wrote that he didnt wanted me there basically. I pointed out that they are funded by "Malmö Stad" and that it is a place for anybody, but to that he responded, that they decide who is welcome. To that I want to say that it is kind-of a illicit operation, to welcome people, make them invest their time in the place and people, make them think of possibilities of using the place and then ban them for no reason.

I think its a possibility that Bertil simply ban me because I ignored him in the past, when I was not informed that he would be the leader in the future. I was not trying to be rude, I was simply busy with the business of mine at the time.

Today I dont live in Malmö anymore, but I just think it is "somewhat irritating" that I am banned from a public facility for no reason and I would like to go there when I am in Malmö to drink a cop of coffee, talk some Swedish, talk about LasseCash and HEX, place my flyers there, go to the social events maybe... but all that is gone for me, because Bertil the new leader got offended that I ignored him, while I was busy!?

Naa it was kind-of illicit behaviour funded by the corrupt state, but I dont expect you to understand that. You are just an annonymous BS artist, that dont even know the shape of where we live, BALLHEAD!