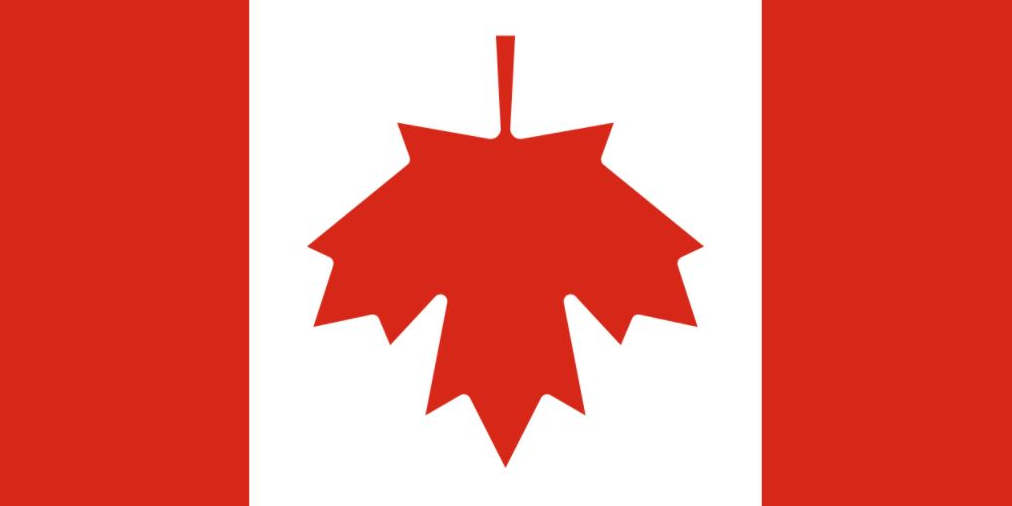 Canadian Protesters are Being Arrested in Ottawa 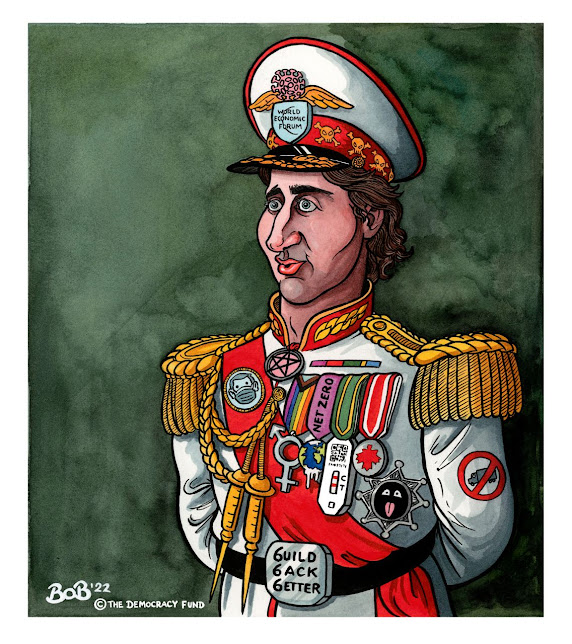 Suspending the Charter of Rights and Freedoms

A state of emergency cannot simply be "invoked" by the prime minister, it has to be debated and passed. Even if it were passed, there is no justification for relocating peaceful protesters.

No debate, no evidence of danger or violence from protesters, no boarded up buildings, no vandalized cars, no thefts, and most remarkably, no weapons!

Yet semi-trucks honking their horns and people partying in Ottawa justifies an emergency?

One By One, the Live Streamers are Arrested

There are a dozen or so live streamers showing what's going on in Ottawa and one by one they are arrested live on stream. It's heart-wrenching.

There are about five or so left streaming, as the crowd is forced into a smaller and smaller area. There are reports of snipers on the rooftops, reports of semi-truck windows being smashed and drivers forcefully removed.

The aggressive maneuvers of the police are recorded on these streams in real time. The stream I've been watching today is here:

Canada Has Proven Itself No Longer a Free Country

Our family loves Canada and the Canadian people. How this could happen in a supposedly free country grieves my heart. There is massive support for the truckers and protesters in Ottawa. Those being arrested are being charged with "mischief", whatever that means. They are likely going to be released quickly, but the idea is to remove the Canadian citizens from Ottawa, so they can eventually tow (and likely confiscate) the semi trucks.

This is for the prime minister to save face to his globalist friends. Meanwhile, every sovereign nation is horrified by this petty dictatorial action. 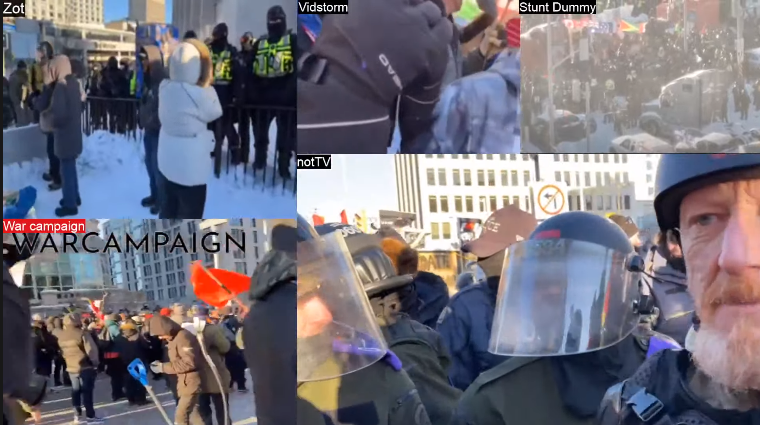 The Citizens are Praying for the Police

I do not understand how a collective force can so abandon their personal morality that they can bully peaceful protesters, while they petition for their souls before Heaven. Satan has led many captive to his will and they will fight for his (temporary) satanic reign.

Looking into the eyes of the police and riot troops they are without remorse, believing "just following orders" or "just doing my job" will vindicate them on the day of judgement. 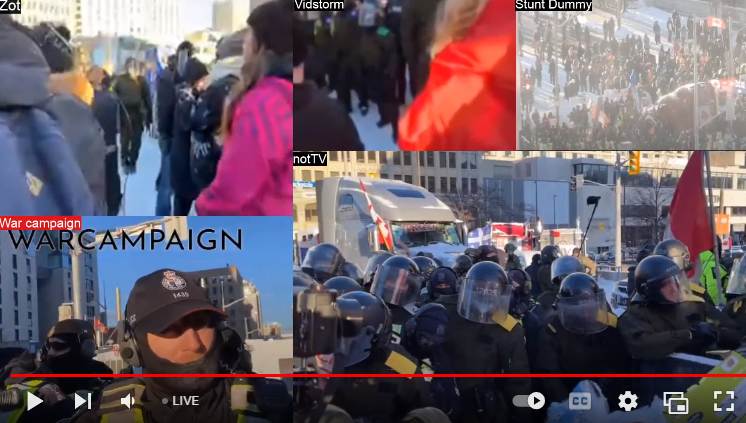 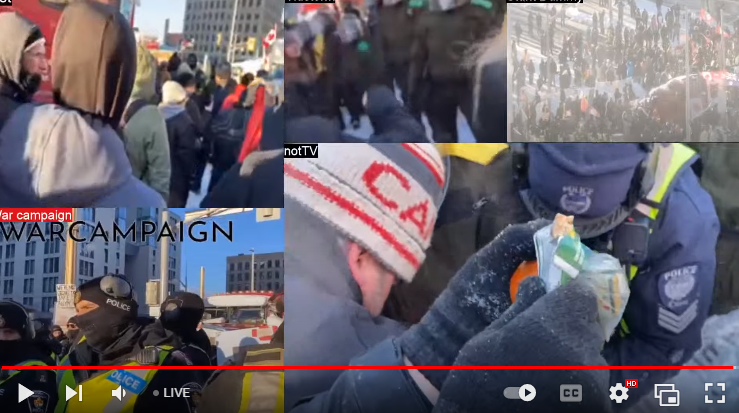 A man unwraps a granola bar and hands it to two police officers while they have a citizen pinned down and they are applying twist ties to their wrists.

I tell you, love your enemies and pray for those who persecute you, that you may be children of your Father in heaven. Matthew 5:44-45 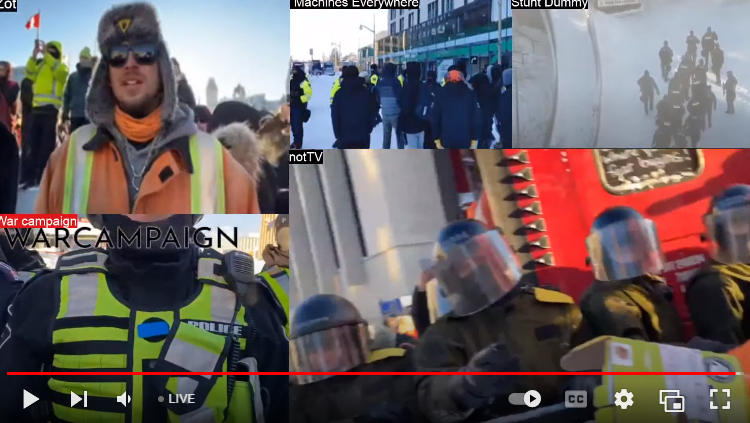 Rows and rows of soldiers, squeezing the citizens into a smaller and smaller space.

"It feels like a mosh pit in here, I'm bear hugging everyone!" 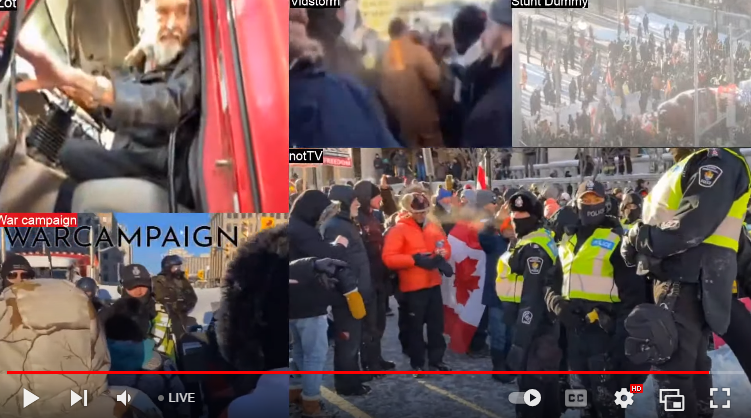 Brave trucker still sitting in the cab, even as the police line as reached his rig. 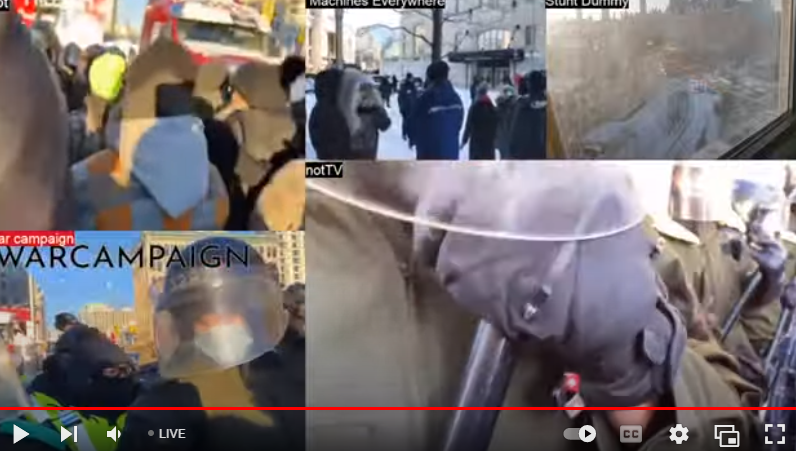 Baton in hand, ready to use against any citizen aggression. Face shield and medical mask, keeping everyone "safe" in this new Canadian distopia.

"you have to take a beating for your family, for your country and for the 16,000 people watching the livestream" 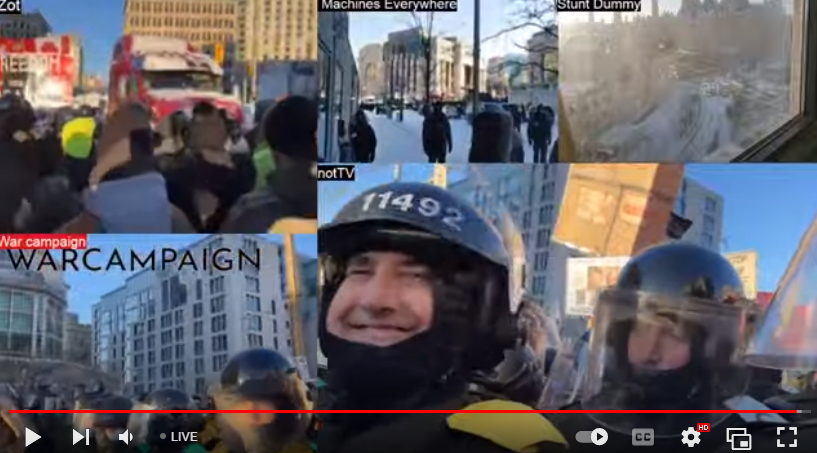 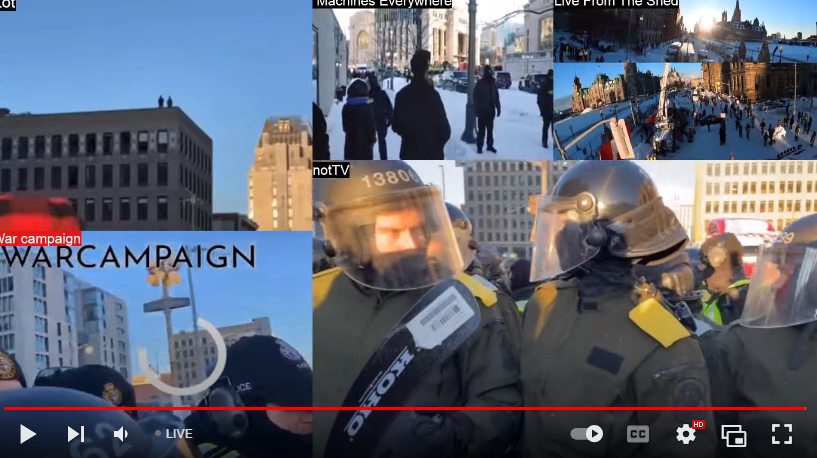 Snipers on the roof. 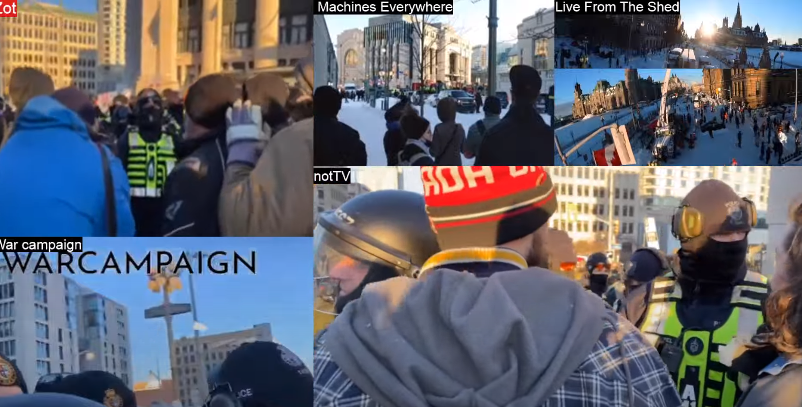 "police are using those earplugs... so we'll see what they use next." 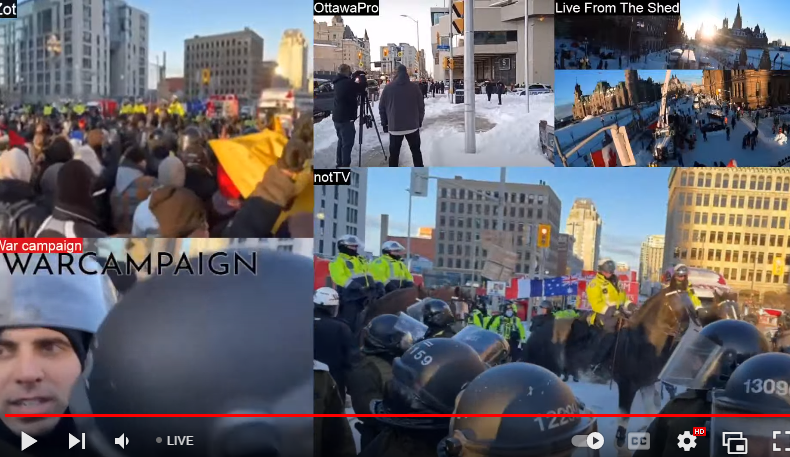 "Some of these officers need to brush their teeth, bro you need to bush your teeth, you need better teeth hygiene. I'm telling you right now, I can smell their breath and it ain't clean." 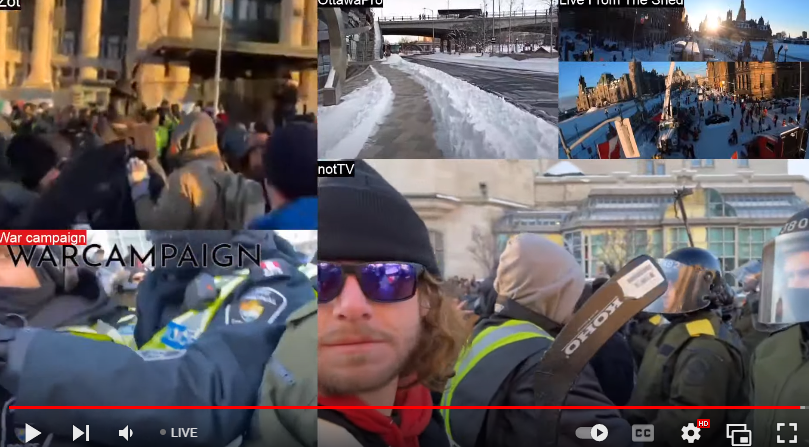 Someone's ready for a game of hocky. Love Canadians!! 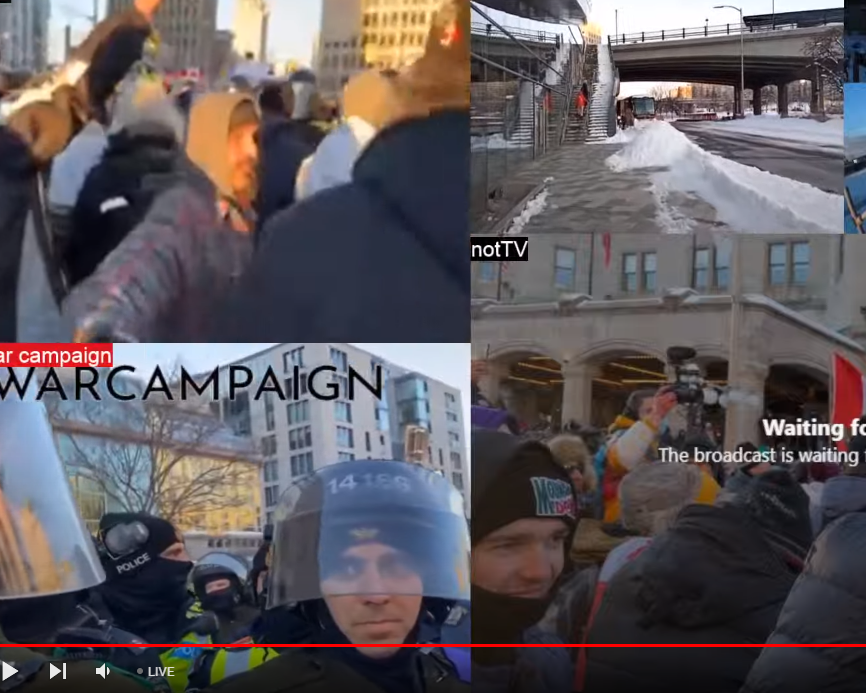 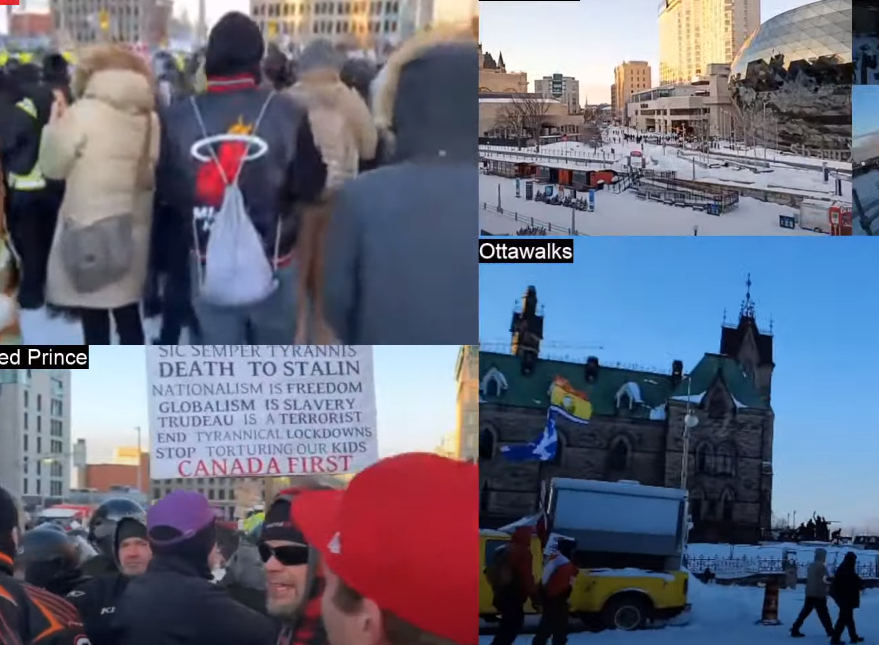 "Nationalism is freedom, globalism is slavery" 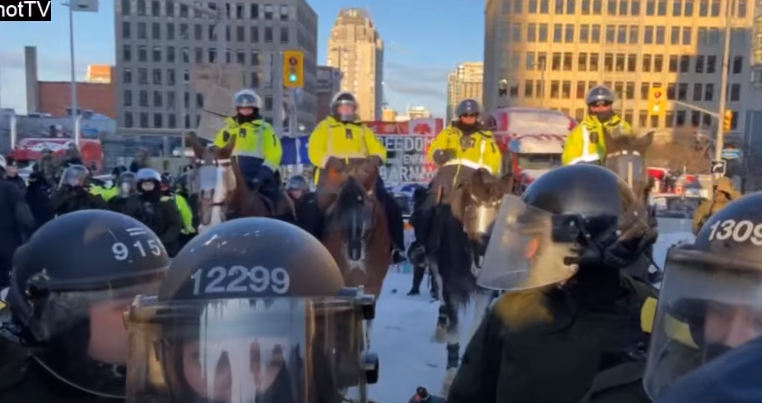 "Now we know what their tactic is, sweep through with the horses and fill in the gap with police, divide up the crowd" 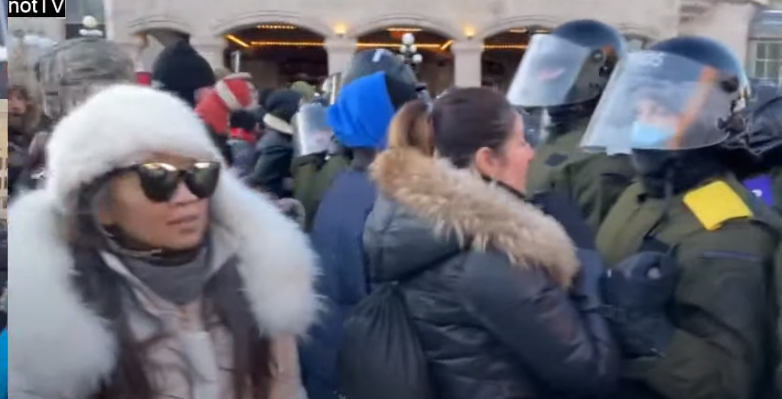 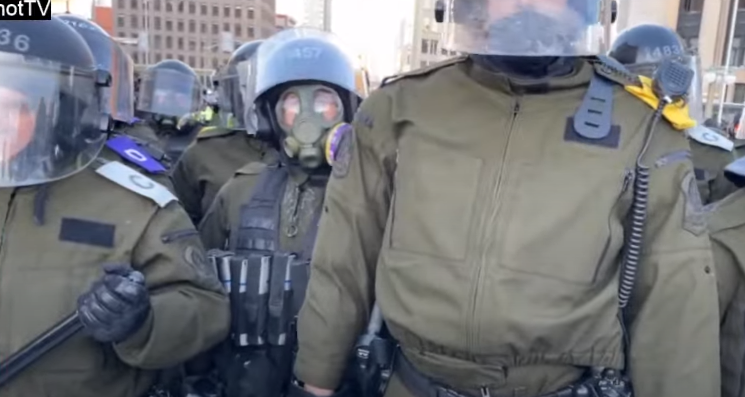 Gas mask, what are they planning?

I don't know how long this will be online, but here it is for now.

It is a difficult day for me and my family.

I LOVE the Canadian Freedom spirit that has arisen the last 4 weeks.
I stood on the overpass waving and cheering as the truckers left on their journey to Ottawa.
I have been watching the livestreams every day since, and seeing the people full of love, joy and peace on the ground.

The first violence in 3 whole weeks was initiated by the Police and not by a single protestor. I watched in horror as 2 people were trampled by Police horses; one of them being a peace-loving elderly, Mohawk woman who was using a walker. Her health status is unclear at the moment; there has been talk of her dying but right now it seems that she is probably alive with a dislocated shoulder.

This is so heartbreaking and devastating to see what our government and policeman are doing.
Praying for all.

That Canadian Freedom spirit is just going to glow hotter in the coming days and weeks. Even though the peaceful freedom fighters of Ottawa are being removed, there are now many more convoys coming in from all over Canada. This is far from over, the tyrants don't know what they have done. They have awoken the TRUE Canadian army. They're peaceful, their weapons are not deadly, but very effective. 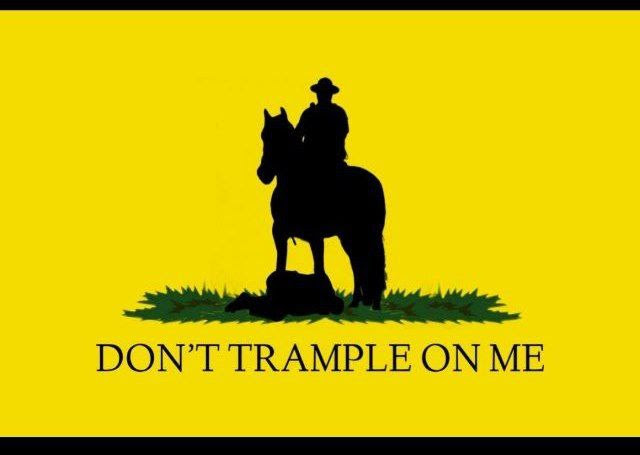 There is some evidence coming out (not yet confirmed) that the riot "police" from Friday and Saturday are not Canadians at all, but foreign UN troops dressed in special gear. It explains how unsympathetic and aggressive they are towards the protesters. It explains why these new soldiers do not speak since it's likely they don't speak English or French. It explains the European crowd control strategy of batons and horses, not anything like Canadian crowd control tactics. It also explains why the Ottawa police chief suddenly resigned only a few days in. Canadian police are growing more and more sympathetic with the peaceful protesters and JT needed foreigners to do his dirty work under his new found "emergency" powers. If all of this is verified, it's a game-changer. Canadians (citizens, politicians and police alike) would now be under threat of foreign aggression.

Oh, wow! If that is true, it is scary. It sounds like something that Trudeau would do though. Wow.
I'll keep my eye on this development. Thanks.

Watched a lot of it live disgusting what has happened. They trampled old lady and wheelchair user sickening.
This will send repercussions through the world. The Canadians are changing history so honourable. This is the turning point outrage will follow. Even my dad a BBC disciple is begging to open his eye 💯🐒

The mask is finally coming off the beast, it's not benevolent, it's not safe, it's dangerous and brutal. Unless something huge happens soon, this is the future of every supposedly "free" country.

This is only the beginning it has to get worse I fear to get better. We need to keep strong this is the battle