Was Silver More Rare and More Valuable than Gold in the Days of the Maccabees? 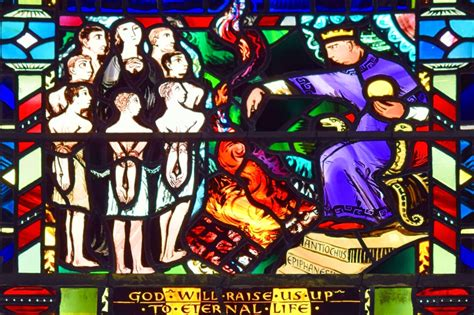 Noticed Something Interesting in 1st Maccabees

Our family reads the book of Maccabees around Hanukkah time and this year was no different. The Temple restoration story is pretty much wrapped up in the first seven chapters, but there's nine more chapters after that.

While reading the ancient words, I noticed something interesting. Whenever precious metals are mentioned, silver is mentioned first. While we typically say "gold and silver" showing that the scarcity and value of gold is more then that of the more common silver, the ancient author of Maccabees says "silver and gold". Interesting. 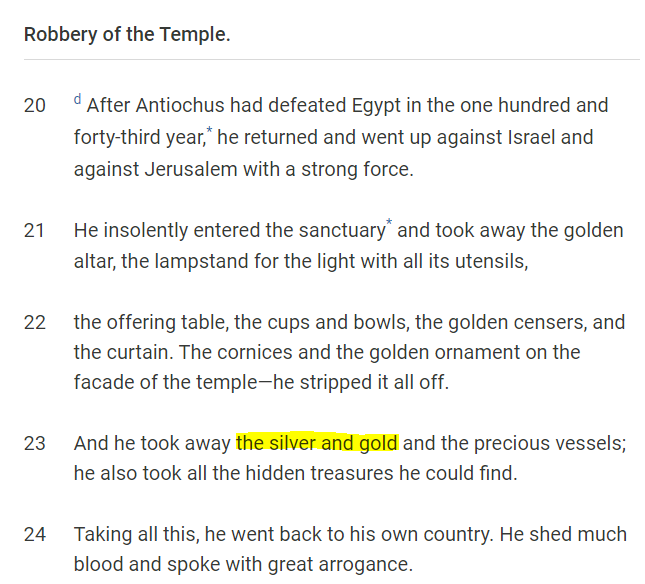 The above passage is from chapter one, describing Antiochus plundered the Temple of the Most High and stole the precious metals inside.

We also noticed that there was an abundance of gold that was stolen, the altar, lampstand, utensils, sensors, ornaments... gold gold gold. Silver is only mentioned once. Does this imply that gold, while valuable, is plentiful? 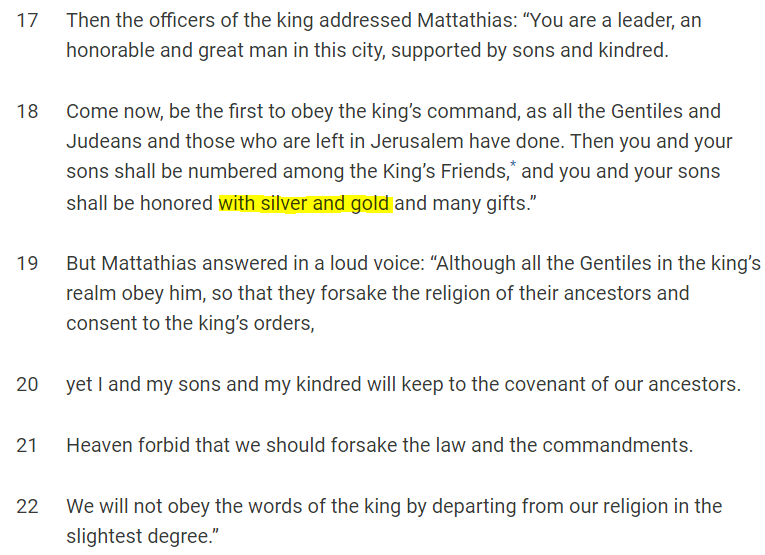 When the king's officers visit the home town of Mattathias, he promises "silver and gold" for Mattathias if he obeys the king's command and forsakes the ancient covenant.

Why didn't he just offer gold? Why offer "silver and gold" as if the hook is silver and the remainder is gold? Again, the emphasis is on the silver first. "You... shall be honored with silver"

In another episode in chapter three, we read about merchants who were attempting to purchase prisoners of war for "silver and gold". Hmmm.... the Torah does describe the value of personal dedication numerated in silver by shekel weight.

This one is odd, since it is one of only two examples where gold is mentioned before silver. Perhaps this destroys my theory? Let's read:

Reading the list, it almost appears as if the value of the items are listed from least to greatest. Gold, silver, blue cloth, marine purple and GREAT TREASURE. It's tricky to equate value to these items by today's standard, since blue and purple dyed cloth is common and it's difficult to imagine they're more valuable than gold or silver - but in ancient times, died cloth was extremely rare and precious. Especially BLUE and PURPLE, the rarest and most expensive dies in the ancient world. So rare dies are worth more than gold or silver. Perhaps this is a descending list?

Exhibit #5: Wealth in Silver (and Gold)

Here, gold is mentioned after silver, the phrase "wealth in silver and gold" implies that the greatest wealth is in silver. Then we read about "gold helmets", didn't they have "silver helmets" or is silver too rare to make helmets?

Gold is mentioned in conjunction with bronze, in regards to the makeup of shields in the army service.

Why not silver shields? Polished silver makes a perfect mirror, perfect for blinding the enemy. Better than gold or bronze. Yet shields were made of gold and bronze. That's a LOT of gold! Observing the order of ancient metal value, it seems like it's silver, gold, then bronze.

In those days, if silver were abundant and cheap (like it is today), they would have made shields of silver instead of gold and bronze. Perhaps in the days of the Maccabees, silver was more rare and precious than gold?

When describing the wonders of Rome, the author makes note of "the silver and gold mines" in Spain. Again, silver is listed first before gold in regards to the mines. Implies that silver is the more valuable. 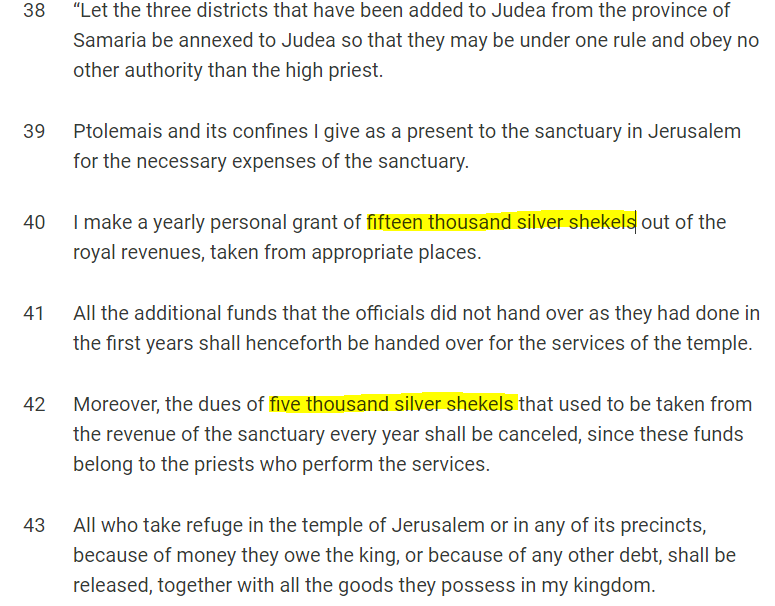 When speaking of terms between Greek King Demetrius and the nation established by the Maccabees, he only refers to debts in "silver shekels". In those days, silver weighed by the shekel was money, gold and bronze and treasure was purchased with silver shekels.

Before, we read about a list in an ascending order of value: gold (least valuable) was mentioned first, then silver, then died cloth, and "GREAT TREASURE" (being the most precious).

Here, we read a list that is in descending order of value: silver (most valuable) is mentioned first, then gold and then "many gifts" (of quantity, more than preciousness).

Again, we are seeing articles that are worn made of gold, but never silver. A crown and buckler would require a lot of gold to manufacture, implying that gold has value, but is plentiful. Plentiful enough to make bucklers out of it!

I can't help but wonder: why are none of these made of silver? Is it too scarce?

We see another descending list here, of silver (most valuable) gold and apparel and many other presents (least valuable).

Another example of object made of gold - dishes, table service and cups. These are all things found on a dinner table. Again, no silver items at all. Then another mention of the "gold buckle". Gold appears to be plentiful!

If silver were plentiful (like in the days of Solomon), where are the silver dishes cups and table service?

Solomon accumulated 1,400 chariots and 12,000 horses, which he stationed in the chariot cities and also with him in Jerusalem. The king made silver as common in Jerusalem as stones, and cedar as abundant as sycamore in the foothills.

Silver does not appear to be as common in Jerusalem as stones, as it was in the days of Solomon. But there seems to be a lot of gold!

We've often associated gold with money (and it is tradeable as such), but during the writings of this ancient document, only silver was considered money. Gold was used to make dishes and bowls and shields and helmets. Silver was used to buy gold to make these things. Silver was money.

Here is the gold shield again - they seem to have a vast abundance of gold! This shield is very heavy, too heavy to be practical. The idea was to impress Rome with their abundance of gold, which in the record of the Maccabees, does impress the Romans.

Gold is abundant. Silver is rare. Is this just in Israel or the whole world at that time?

This is the second example where gold is mentioned before silver - the context is Athenobius seeing the splender of Simon's court. The (abundant) gold and (less abundant) silver plate on the sideboard.

From the examples above, gold is extremely abundant in Israel, where silver is less abundant.

Exhibit 17: Foreigners have Much Silver

Interesting how the author notes how Ptolemy had "much" silver and gold. Again, implying that silver was rare in Israel, but foreigners had an abundance of silver. Was Israel plundered of it's silver from the Temple?

Yet again, we see a list of items by descending value. Silver is listed first, then gold and gifts.

It seems there is abundant evidence that (at least in the land of Israel) silver was much more rare than gold.

Was this the condition of the whole world? Was this unique to Israel? These are fascinating questions.

To think gold is abundant, while silver is rare, is a strange concept. Today, it takes 80x the weight in silver to equate to gold. Yet here in this story, gold is everywhere and silver is scarce. Gold is never treated like money, where silver was itself money. While many gold items are mentioned, very few (if none) silver items are mentioned.

What an upside-down situation they were in. Unless gold is actually more abundant than we've been told?

Who knows, but the historical record is fascinating to study!

I thought it was also.

In Roman times a silver coin was a workers day pay and a gold coin was the the costs of a gentlemans coat, suggesting gold was worth more.

In China when trade with the Westerners started silver and gold were same value almost and the DUtch merchants immediately made use of it ofcourse causing the price of silver to go down cpmpared to gold also in CHina.

Thx for the article !!

Old coins had silver and gold included in various %

Thanks for the additional info!

You make a strong case arguing for the relative abundance of precious metals for those times.

That was the conclusion I reached after reading this book. Facinating!

I love religion, but I'm not as familiar with the main texts as others. Those numbered passages, are they aligned like that in the Torah? I'm always interested in following along after reading an article like this to see the greater picture of things. Anyway, thank you for sharing your work.

The book of Maccabees is not in the Torah, but is included in the ancient writings of Israel. It's also included in the Catholic bible. It was removed from most modern bibles since the 1800's, mostly caused by protestant scholars. There are some very important lessons in this book and (I believe) it should never have been removed from the canon of scripture. If you get your hands on a Catholic bible, it's worth a read! There's also 2nd Maccabees which tells the same story again in a different voice.