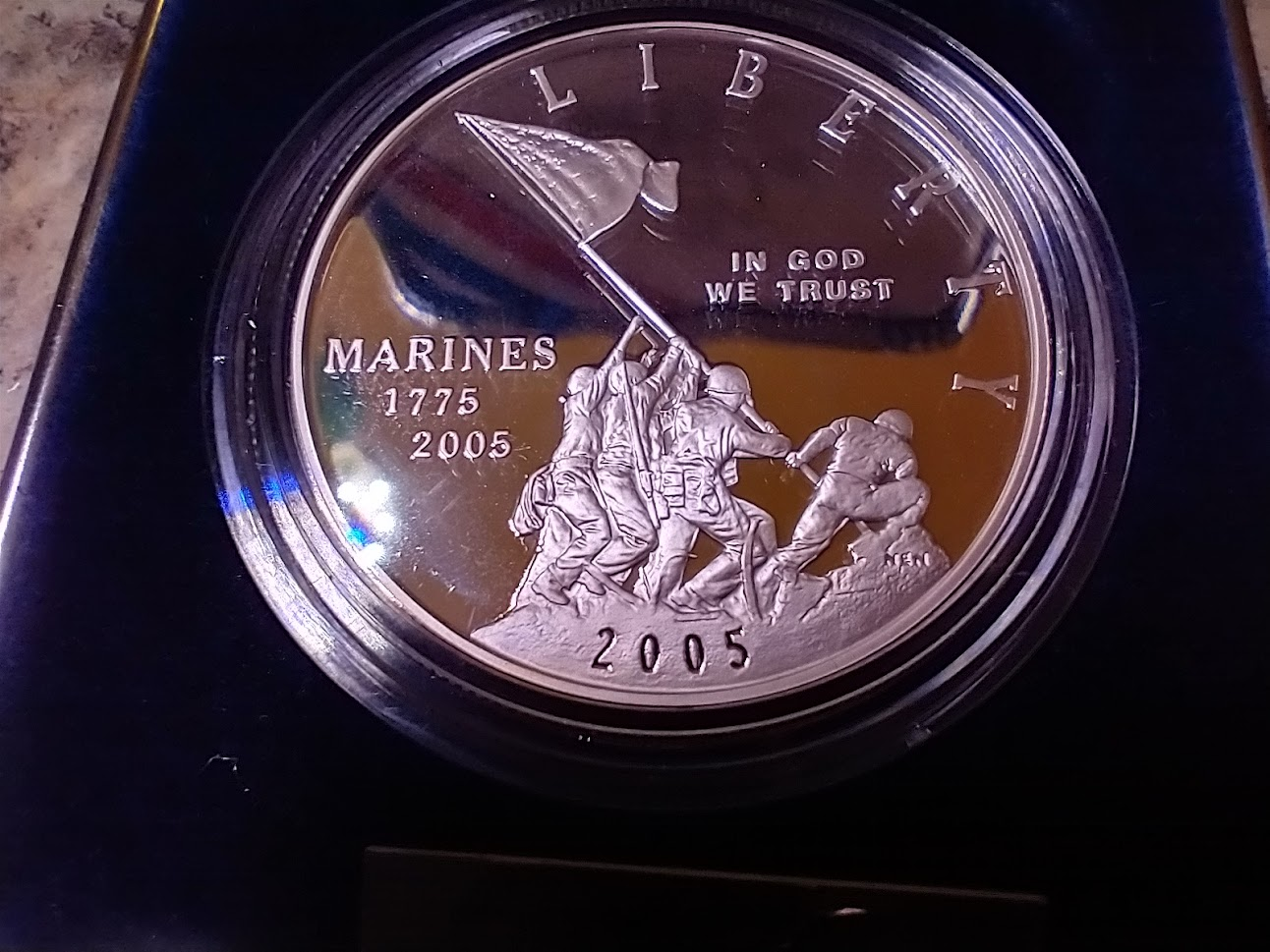 This is one of my favorite commemorative coins, not because I want to be a Marine or have a particular afinity with the US military. It's the story of purchasing the coin itself.

I used to frequent a local coin shop corner that was nestled in a pawn store. The gentleman behind the counter was always friendly and he would show me any coins I requested. Every coin had a sticker with a pricetag on it, and I noticed often the "sticker" price was not exactly current with silver prices at that time.

I asked why the coins had stickers on them and the man explained that he inherited his brothers vast collection and decided to set up shop to sell it off. The brother had placed stickers on all the coins, and when he inherited them, this gentleman had never bothered to check prices and make them current. I asked him if he was familiar with eBay and he said he didn't do electronic stuff. (This would have been around 2007, before the internet was on everyone's phone).

I didn't want to take advantage of the man's faulty sticker prices, so I would offer more for the coins than he was asking. He would gladly accept the higher prices. He really enjoyed my enthusiasm in checking out the various coins.

He also seemed to have trouble remembering that I had been there before, he always treated me as if I were a new customer. 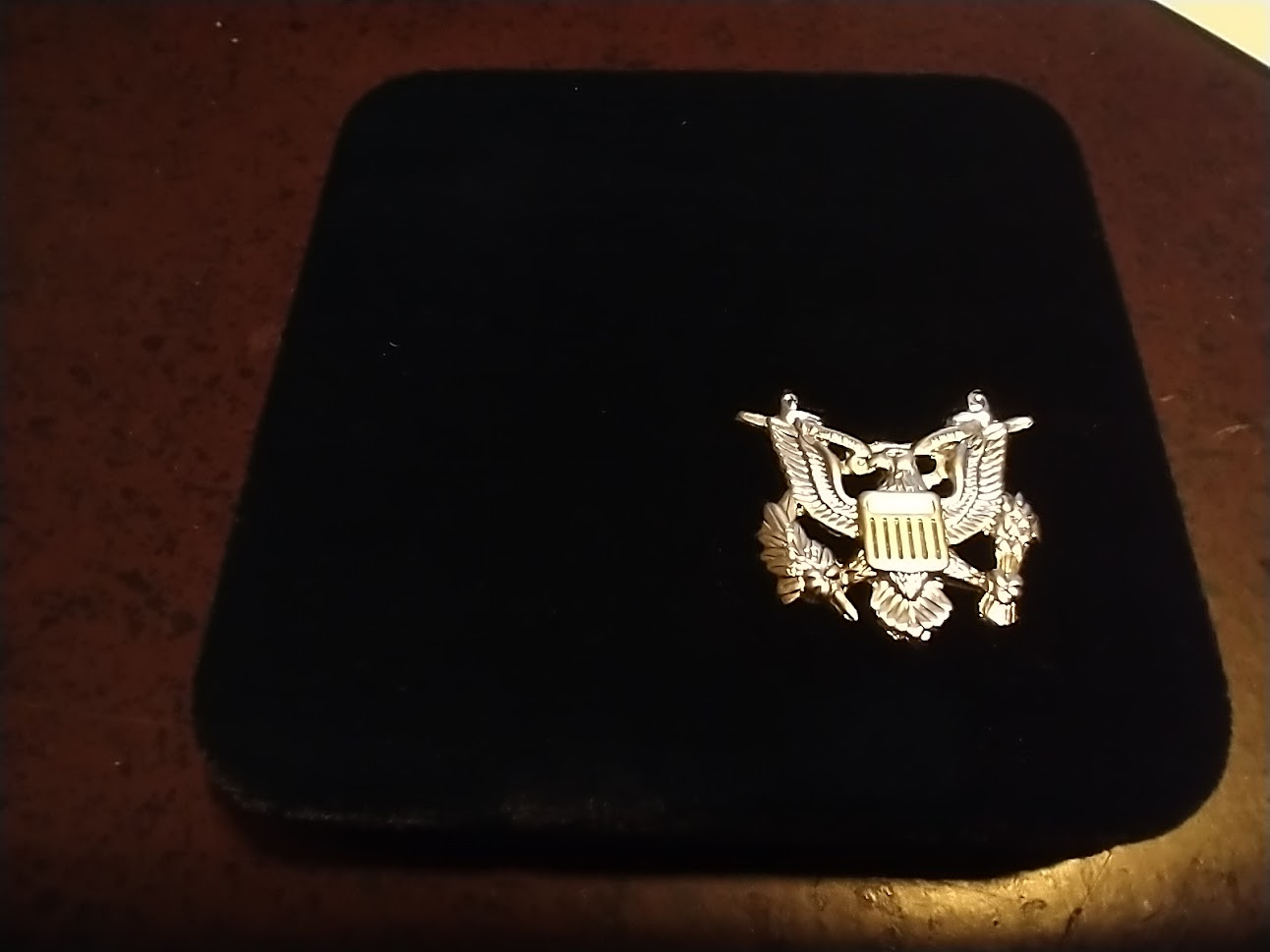 One day when I came in, he wanted to show me something special. He went to his safe and opened it up. I was wondering what he'd bring out. Was it gold? Was it a key date? What does he want to show me?

He brought a blue felt box out of the safe. I remember seeing this silver eagle on the front. He opened it up for me - and I saw a dollar coin with this beautiful mirror image. The obverse depicted the famous flag being raised at Iwo Jima stating "MARINES 1775 - 2005" A very handsome coin! 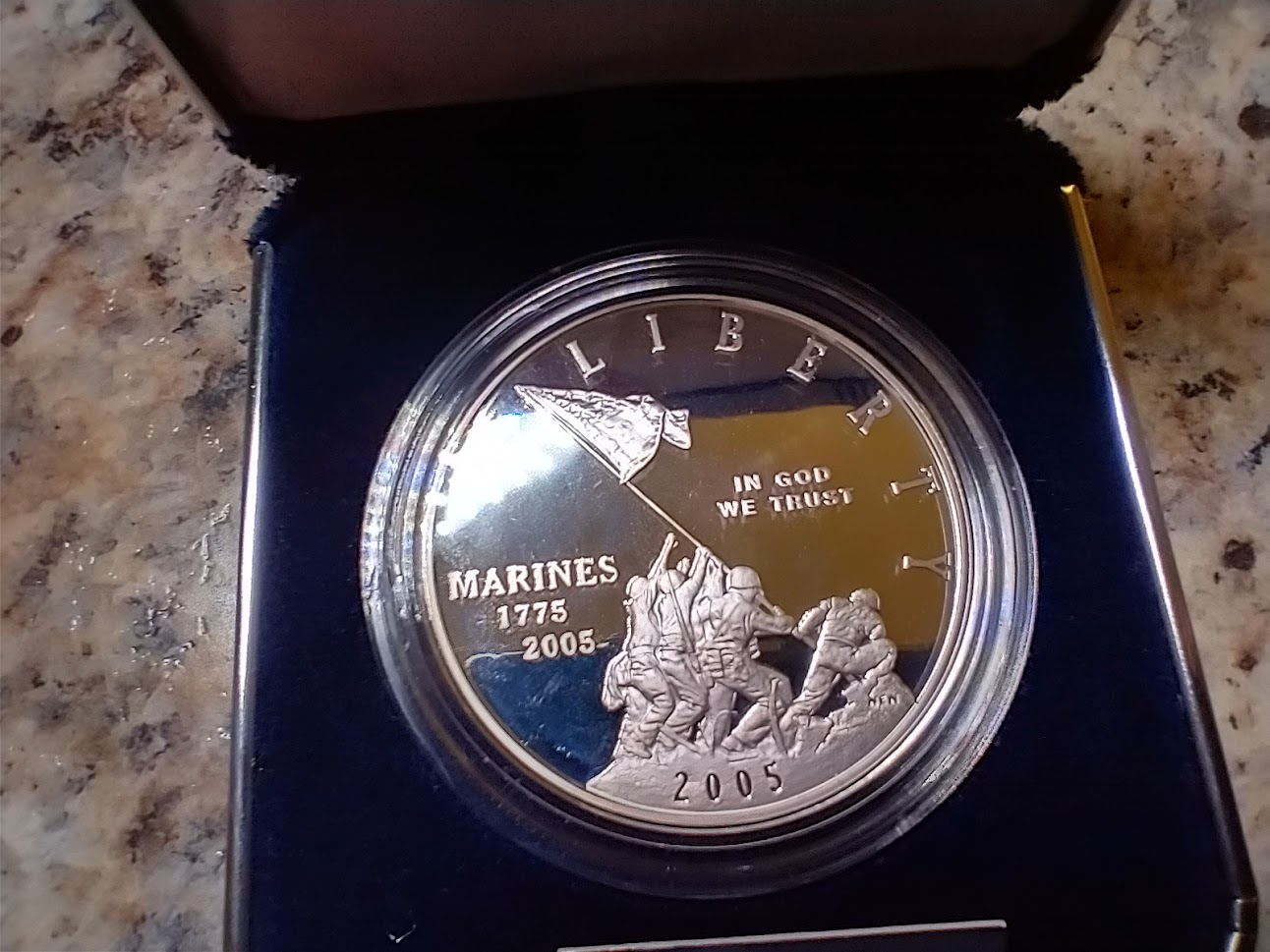 He carefully removed the coin and showed me the back, displaying the US Marine Corps Emblem. 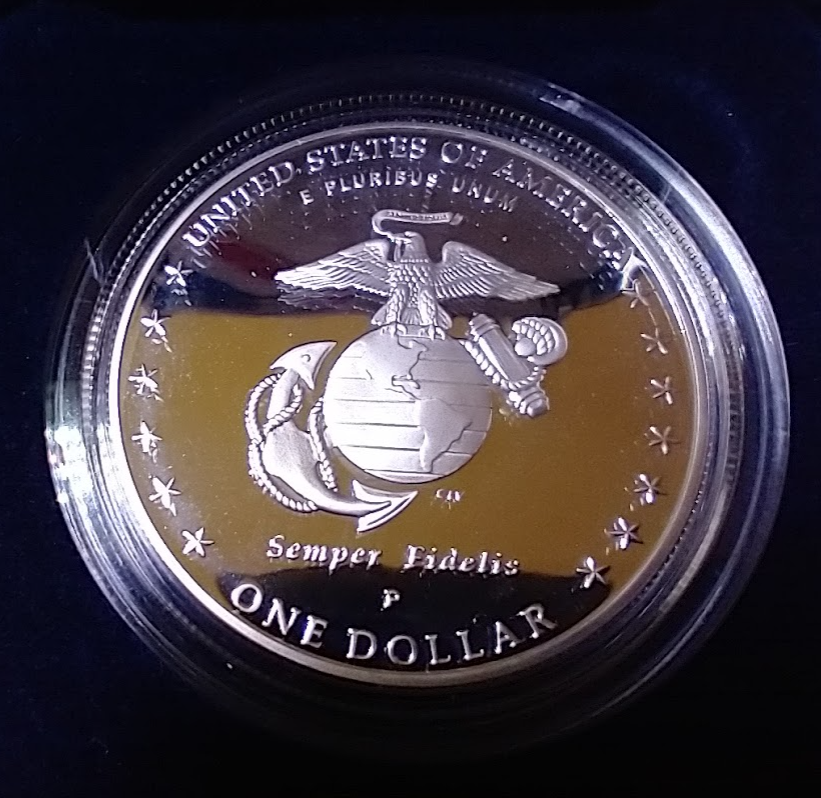 He said "Semper Fi". I had no clue what that meant (at that time). He told me that his brother was in the Marines and that this coin reminded him of his brother. I admired the coin for a while and I became curious. I asked him "How much is this worth?"

He looked confused for a moment, because I don't think he was considering selling it. When I saw this, I immediately regretted asking that question, because obviously this was a treasured coin for him, not for sale. But he was behind the counter and felt obligated to give me a price. He said something in the range of a couple hundred dollars. I didn't flinch.

Of course that was extremely high for a coin like this, and after admiring it a little longer, I smiled and handed it back to him. I said "That's quite the treasure".

I browsed some more before leaving the store.

I wondered for a moment, if that particular coin was extremely rare, if it really was worth a couple hundred dollars. I searched for it on eBay and found it for about $35. Silver price was under $15/oz back then. I also found the uncirculated version for a similar price.

I bought both of them, the proof and the regular finish.

Once they arrived, I wanted to see what reaction the man at the coin shop would have if I offered to sell him the non-proof MARINE coin to complete his set. I came in and began my regular browsing and chit-chat. I asked him "Buy coins too?" He said "Depends on what it is."

I very slowly brought out the little blue box (cardboard, not felted like the proof) and showed him the US MARINE DOLLAR coin. His eyes got very big for a moment and he asked if he could get a closer look. I handed him the box, he got out his jewelers loop and investigated the coin for what seemed like a very long time.

I asked how much he would be willing to offer. As soon as I said this, he handed the box back as if he had little interest. "It's not shiny like the proof." I knew he didn't remember our previous conversation.

"No, it's not... what would you offer for the proof?" He said he wasn't interested in purchasing a proof and he would buy my coin for thirty dollars. I thought about haggling a little with a counter-offer, but I didn't. I knew this coin would be special for him. So I handed the coin in box, certificate and all, and said "sold". He handed me a twenty and a ten in cash. Done deal.

I remember leaving the store, pretty happy with myself offering him a coin that was very prized by him (even if it's not the proof) and he now has a set of both designs.

I Remember This Story When I See This Coin 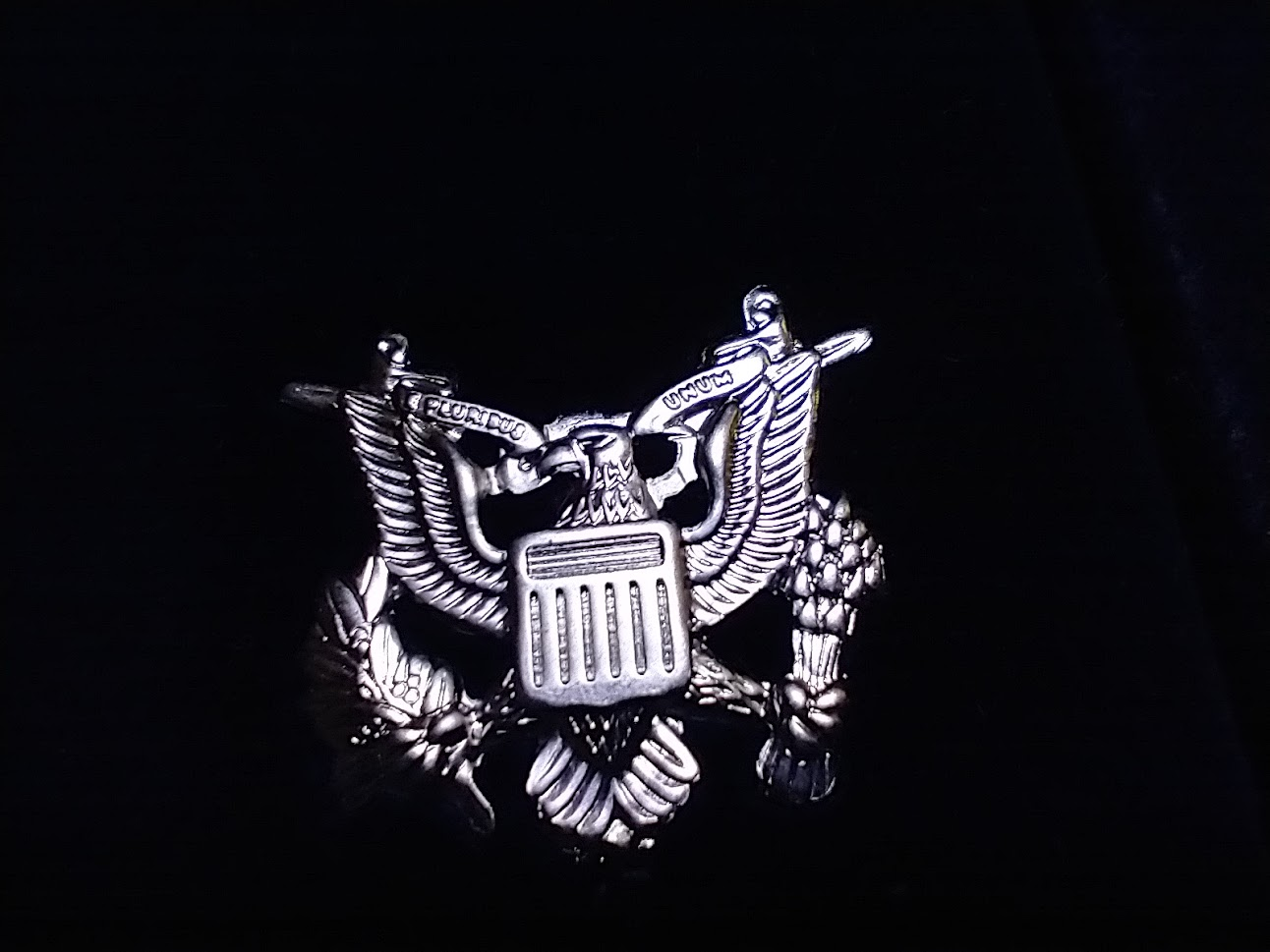 When I was little, it was all about the novelty of the images, as I grew older it became more about the weight of the stack. These days, my favorite thing about particular coins and rounds is the story. The memories associated with that object.

It's not so much the object itself, but the memories.

The reason I'm happy to have the proof of this particular coin, is that I remember the almost reverent way the man showed me this coin and being struck by the mirror finish and handsome design.

I'm also happy that he got the complimentary match to his beloved MARINE PROOF, another matching but with a mat finish.

It was soon after this that I returned to the pawn shop and the coin dealer's corner was gone. I asked the pawn shop owner where the coin seller went and he said he was closing up shop. No explanation.

The End of the Tale

I used to spend a lot of time in coin shops, but these days I mostly purchase online. But it's very impersonal. There's no discussions, there's no haggling. No mutual respect. Online, it's a cold mechanical transaction.

We are approaching a day when brick-and-mortar stores will be difficult to come by and difficult to keep profitable. But there will always be demand for face-to-face transactions and deal making. These deals are always the BEST deals.

Then it is perhaps when we take the time to personally buy a coin from a Coin dealer you tend to leave with more than just a coin in your pocket.

Semper fi mean always faithful... I believe it is the motto of the U.S. Marines.
That's a very nice coin.
It's a favorite of many.
Thanks for showing us and thank you too for the story!