Looking back at driving 4 months with an EV car!

@fullcoverbetting
over 1 year ago (Edited)
OCD

In the beginning of February I will allowed to pick up my long ordered EV car. Due to the corona pandemic and being force to work from home it took some time to driver 3500 KM. Which is more or less a bottom line for getting a good impression about how I do love or hate driving a full electric car!

Since 2 weeks, we not only have one but two electric cars at home, so I do think that it is time to write an appropriate review about driving full electric!

So here we go!

I guess I will start with telling which cars we do have!

For me it is the Polestar 2, a Chinese brand which is a daughter of Volvo, the wife has an Ford Mustang Mach E, standard rage. She did want to order the extended range, but due to a miscalculation at the lease company it turned out that this car was out of here budget!

Like it should be we do name our cars, but we do have a disagreement about the name of the Mustang. For me it is simple we do have the beauty and the beast! The beast is on the right, the beauty on the left. My wife likes to call her car "The Bullet".

The beast is simple it is a beast on the road with 408 HP, cruising from 0 to 100 in 4.7 seconds. This is incredibly fast for me, my previous car only had 100 HP. Imagine the difference. 660 nm really does push you forward in a blink of an eye. This is the launch edition, so there was more or less only one option available which was the performance pack. This performance pack did come with golden seat belts, which was the reason I did deny it!

The wife her car is the standard range edition and when ordering it, the difference between an real EV car from an EV manufacturer and an EV car from a major car player immediately is visible. While I did have only one option, the option list for the Ford where multiple pages long!

Also the only way to order a polestar is via the webshop, there are local showrooms, but still the car has to be ordered online.

Well the most discussions about EV cars are about the charging time and the distance one can drive with a fully loaded EV. Let's start with charging.

We decided to order a home wall box so that we can load the car at home. Here is already starts to become difficult. How fast does your wall box have to be and what does this mean for your energy bill and electric network at home. We quickly decided to go for a 7.4KW wall box. That means that it would take around 10 hours to fully charge on of the battery. This did had the advantage that no changes were necessary at the plugs at home. This was a hard nut to crack, we are still relatively early adapters, so not a lot of information is available!
The other requirements we did have that split billing should be possible, so that I can send the bill to the company I work for and the wife could to the same. The other was that loadbalancing should be possible. Load balancing does mean that for instance when the car is charging and we do put on the over, that the wall box has to assure that we don't surpass a configured power consumption.

To bad, the wall box we did get doesn't support neither of the two requirements. So we are currently negotiation with the company of the wife, who did pay and install the wall box what the options are. Will be a long road to reach and agreement. What makes it difficult is that they did pay and it is the employer of my wife. If this would't have been the case, the wall box would have been returned to sende!

But charging at public charging points also works good enough! We do have some 11KW charging points close to home, which also does the trick and recently we discovered a fast charging station which does load at 50KW, meaning that within 80 minutes the cars is fully charged!

Well this is complete different story! In Europe WLPT is the standard. According to that the Polestar 2 has a range of 480 KM while the Mustang only has 360 km.

But these are really only indications. There is a huge difference between summer and winter (the heating for instance in an EV does come from the same battery as the engine, while in regular cars this is completely different!). Also a big difference between driving in the city and on a highway. To my surprise it uses more energy on a high way than in the city.

In the winter my car will have an estimated distance of 361 km while in the summer it will be around 427 km. The mustang is performance much worse with 271 km vs 306 km (summer).

Last week we did use the Mustang to drive to the ocean which is around 220 KM and at the trip back, almost fully loaded without traffic jams, we only had 40 KM left in the battery. I have to admit that we were with 4 in the car combined with luggage for 4. Which of course also has an impact!

But if I do look at how many days in the year I do drive more than 300 km in a day, probably I won't get above 5. So beside if you do plan a long road trip, this shouldn't hold you back in buying an EV car. And the technology is evolving fast! The only downside is that if you do need to drive unexpectedly a long distance there is no option to fuel it up at a gas station in a few minutes and drive off. So you do need to take that into account!

The enjoyment of driving!

I will focus only on my car and not the Mustang, I haven't driven a lot with that car yet!

I do think that the Polestar 2 is a real eye catcher, lots of people do start to talk to me about the car. Completing the car and asking lot's of questions!

The thing I do like is that you do have full power from the first centimetre on. And it only has 2 gears! 1 to go forward, 1 reverse! That's is. It is not like an automatic car with still 7 speeds. Nope only 1!

Then there is one pedal drive, which is something you do need to get use to. From the moment I do lift the gas pedal, the car start breaking to generate some energy which is send back to the battery. I only have to use my brake to come to a complete stop. You do need to trust it and enjoy it! My wife doesn't get used to it but I do adore it!

And it is quite, you really only hear the tires touches the road. When I do pull up, it feels like you are floating on the roads! Love that sound and feeling!

But that also comes with a responsibility. You do need be aware the pedestrians and cyclist don't here the car approaching, so I am very cautious when I do need to pass them. I can understand why the government do want that the cars will make some kind of noise!

And it stays strange having no engine it all!

Also it does have some great hidden features! Like the take away feature:) 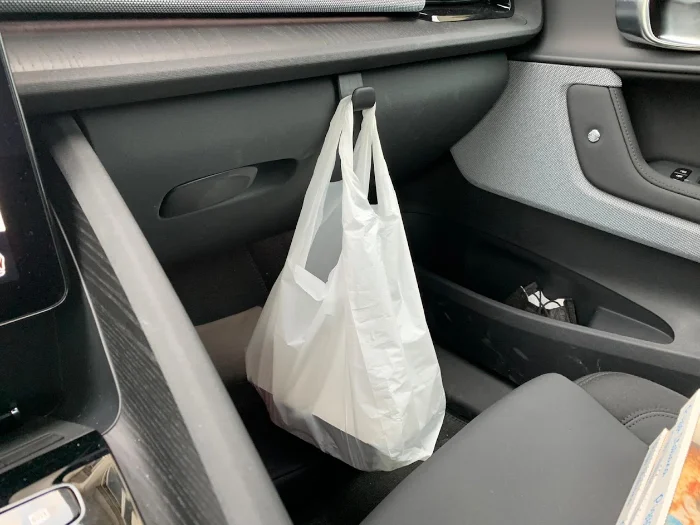 Being fully Google controlled also has advantages. Everything in the car can be voice controlled from asking to play a specific song to turning on the heating of the seats!

I don't think that I will ever go back to a fossil car again!

Great to hear your first proper review and awesome that you're never going back to fossils. Keep enjoying both cars!

@tarazkp
over 1 year ago

One day, I will be able to ,go full electric too.

Thx!
While I did have some minor problems with my car, I don’t regret my decision to go full EV.
Also gives me the feeling that I do care about the planet.

Good for you , it’s the future . How’s infrastructure where ever you are

Not bad at all.
Roads are more or less splendid. Charging station could be more.

That's my concern with the Northeastern part of the USA, not enough charging stations. Once more of those are in place, I will get on board. Good luck with your car.

The way of the future. Oil/petrol is so 20th century tech.

!BEER
It for sure is!

Hey @numpypython, here is a little bit of BEER from @fullcoverbetting for you. Enjoy it!