Splinterlands - one month review and progress

@erikklok 66
about 1 month ago (Edited)
LeoFinance

About a month ago, I started playing Splinterlands. After one week, I posted a first update with a great ROI. Time to see how things progressed since then.

As I said earlier, it took quite some time to get to know the exact rules and figure out how to have the best chance of winning battles. Honestly, I still suck at the game itself. I only win about 43% of my battles, so that should really improve before I reach a higher league than Bronze III. What also needs for that to happen is to improve the power of my collection.

After the initial first card and the Beta pack I opened, I only bought a couple of cards myself (two Harvesters to have 5 and get them to level 2). I did get some reward cards, but that has been slow lately. Not the least because I was about 2 hours late to buy some Quest chest with credits. I was almost out of those before the announcement came that you could only buy them with DEC (which makes it really expensive/not profitable in my opinion). Hopefully I get some of the recently announced cards at the end of the season tomorrow. 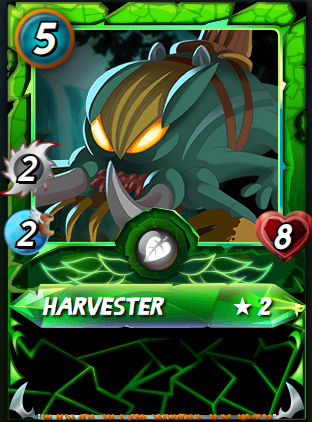 My Harvester level 2, the only card I invested in myself

Always good to keep track of the financial side of the equation. I didn't invest more in the game myself, so I only bought the Spellbook and 10 Quest potions (for $17.5 or 36 Hive). The latter one did get another of those fat 2k DEC chests (so 2 in total), so that made it a really profitable investment.

Like the first time, my DEC got boosted a lot. I'm now at 5.5k, worth around $30. Again a great return compared to the 15.6 Hive ($7.5) I used for buying the potions. The price of DEC did decrease a bit, so it could have been even better.

Mainly thanks to the increase of DEC, I also get a nice airdrop of SPS every day. I staked all SPS I received so far, making the staking rewards bigger and bigger every day. You can see a nice increase from 8.7 to 33.4 here. Unfortunately also the SPS price went down, so the dollar value only went up from $3.33 to $7,66. Still not bad considering they're free tokens in the end. 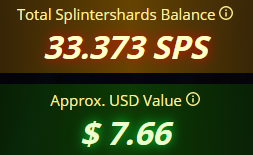 Want to play too?

If you got interested and want to play the game too? Consider using my referral link, so we can both profit of it a bit.
https://splinterlands.com?ref=erikklok