I love this idea, and I think this green moon coin is worth buying and exploring.

You're always giving us the happening ones, thanks @coininstant you have been answerable to your name.

Thanks, that's exactly what I was thinking when I cam up with my blogging name so many years ago. I was always thinking of ways to make coins appear "instantly" like pulling a Rabbit out of a hat or something. $WINE time again!

You've got a pretty good idea about the Green Moon token. I hope all those who will invest in it will benefit.

Thanks, I find myself understanding things better when I'm trying to teach them in a post. Here's some $WINE for you!

@wine.bot
over 1 year ago
Congratulations, @coininstant You Successfully Shared 0.100 WINEX With @kawsar8035.
You Earned 0.100 WINEX As Curation Reward.
You Utilized 1/3 Successful Calls.

@misterengagement
over 1 year ago
There has already been too much ENGAGE today.
0
0
0.000
Reply

Hello @coininstant, I don't know how you manage to keep up with so many things but you do it very well… Thanks for the contributions. ;-)

You're welcome, I just keep my eyes and ears open for new ideas.

Thanks for the information @coininstant, this Green Moon has a quite novel method let's see how it goes. Good day.

thank you very much for sharing a new project, have a good day and great trading

Wow it's a very good idea from you man

The moon is a cold light, I thougth you knew that, as you told me that you know that the earth is flat?

Yeah Green Moon, like a green light on a stage, or to green light a project, or a script i.e. project Earth! haha good observation! 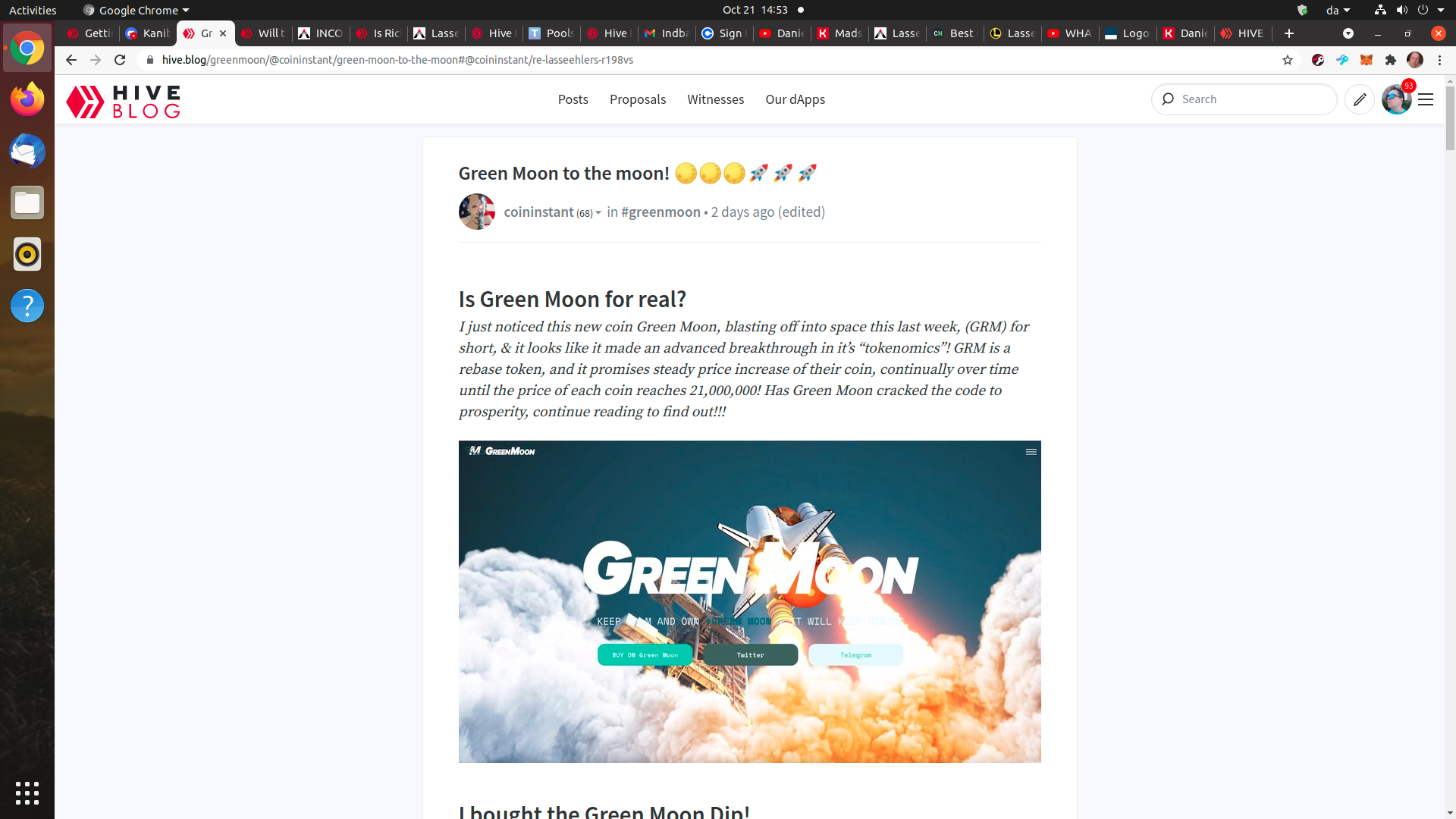 A rocket to the moon? We know the moonlandings where fake, so I dont like this coin.

Yeah, sait doing we'll, that's a plus. This coins is very controversial, I don't blame you for not liking it. Mainly "To the Moon, is just a figure of speech" like clickbait.

I know, but they have a rocketship indicating they dont know that space travel is a hoax.

True I'm over Green Moon! After trying it out it appears there is a fine line between winning and losing with this coin. They burn so many of your coins that when the coin pumps you barely make any more than any usual pump, since the price pumps more than the market cap. To be honest I like coins that stay in your wallet, or grow in your wallet like Saitama!

I am planning to sell Saitama soon, I endorse HEX, PULSE and LASSECASH. Thats my game.. I dont hunt anything else,.. I think those are the best of today,, but I am open to hear other oppinions.

Yeah never a bad idea to take profits. Yeah maybe sell half, keep a little just in case it keeps going.
Some deals are coming on HEX, time to buy more soon! You always have great news and advise!

Thanks, I try to keep it current.
$WINE

@wine.bot
over 1 year ago
Hi @coininstant, You Or @marcusantoniu26 Belongs To Hivewatchers/Spaminator or In Our Blacklist.
Therefore, We Will Not Support This Reward Call.
(We Will Not Send This Error Message In Next 24 Hrs).

o.o u did told me about it before, but DAMM those data graphs are sexy xD this one does look ready to jump value in a week and a half i think, it should go up to twise, but a little down after it, love the graphs XD

Yeah I sold already on the spike. GRM went up over 400%, but I only made like 40% after the amount of my coins went down near proportionally to the spike. Basically what happened is everyone's coins burned and less supply leaving coin price higher, like a reverse split. This scares a lot of the investors that had no idea. So I still made some bnb on the trade, a net gain cause I sold on the very top, but it is a really tricky coin to be honest, not what most people are used to. Only buy on the big dips, and sell on the rips early.

A lot of people say it's a scam, but I think they just say that cause they didn't make 400% when the coin went up 400%. Basically it was like the amount of my coins went down 3 steps, but the value of the coin went up 4 steps, so it was a net one step up. I', happy, I still made some bnb off the trade today, I think GRM is exactly as advertised. It held the value of my investment, plus gained a little more. Investors need to realize the implications of the negative rebasing before they fomo in and out.