Ray Arcel| One Of The Best Boxing Trainer 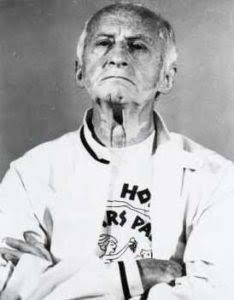 Hi guys, Today am going to speak about a boxing trainer for the first time and that's because many needs to know the Best who trains the Beast.

Will be talking about Ray Arcel and he was truly a remarkable coach, he was considered by many as the best coach ever and he is often regarded as the Goat Coach who has trained some boxing bests, Ray was born into a Jewish family that had just arrived in the United States in search of a better life than the one they had in Romania. From a young age, Arcel began to connect with boxing because in Harlem, the rough neighborhood in which he lived, the boys fought to see who was the best.

At 18, Arcel was sure that his future lay in boxing and that his passion was preparing boxers. He started his career at Stillman's Gym. For many years, Arcel trained top-of-the-line boxers, in fact by 1950, Ray already had 16 boxers trained by him who had been world champions, several of them on multiple occasions.

In the late 1940s and early 1950s the mob ran boxing in the United States. On a bad day in 1953, Arcel was walking through the streets of New York on his way to work, everything seemed normal until he saw a man who approached him to ask something and suddenly three more men appeared.

They cornered him and took him to a closed street, gave him a tremendous beating as a warning that he would retire from boxing, to collaborate with them or they would kill him. This is how Arcel decided to withdraw before being part of the fraudulent system.

In 1972, a former promoter contacted an old Ray to ask him to train a boxer who had all the talent in the world, yet no one had been able to center him. When he saw Roberto Durán, Arcel was shocked and decided to train him for free so he would not have problems with the mafia.

After discussions and lawsuits, the new gangsters decided to let the old Arcel stay with Durán and not have another boxer anymore. Thanks to this arrangement, Arcel became Roberto Durán's official trainer and “El Manos de Piedra” became one of the best boxers in boxing history.

After a long career, for 1985, Ray decided to retire and would remain as Durán's advisor, with whom he had a great friendship after this decision.

In 1994, after a great life, Arcel passed away quietly. To date, Arcel holds the world record for having trained 20 world champion boxers.

I do enjoy true life stories and thanks for finding such an interesting story. Roberto Duran was a real legend and knowing he was his trainer is pretty neat.

Yeah, he was truly a remarkable trainer, and also made Roberto Duran perfect the famous "Hands of Stone" punch

Wow, some truly interesting read, thanks for the lesson. I think, the second part of his life when he retires should be a movie about this while period. Something similar to Rocky, (that was inspired by Chuck Wepner's story).

I read somewhere that a well known film production company is planning on making the biopic of Ray, if this is true, It will definitely be a movie to watch out for..

Oh that's so cool! We know how these things go sometimes. Hopefully it will concretize.

@ablaze
over 1 year ago

To date, Arcel holds the world record for having trained 20 world champion boxers.

That felt like an inside the ropes story on boxing, thanks for sharing it with us.